[MOD] The Lion and the Lilies: A Hundred Years' War Mod for Crusader Kings III

Four things greater than all things are:
Women and Horses and Power and War
– Rudyard Kipling

The Lion and the Lilies: A Hundred Years’ War Mod for Crusader Kings III

Seven years ago, the boy-king Edward of England overthrew the tyrannical regime of his mother, princess Isabella of France, and her ambitious lover, Roger Mortimer, Earl of March. But now, the young lion finds himself facing an even greater nemesis: Philip of Valois, the Most Christian King of France. The son of a second son, the untimely deaths of his three cousins in short succession have brought Philip a kingdom in turmoil.

Long have the Plantagenets ruled in Aquitaine, but Edward has broken with tradition and refused to acknowledge the French king as his feudal superior. Seeking to bring his wayward vassal to heel, Philip has declared the English possessions forfeit.

In retaliation, Edward has named Philip an usurper and declared himself the true heir to the throne of his grandfather, Philip IV of France, the Iron King. There can be no negotiations: the victor will be determined on the battlefield.

It is an age of chivalry and blood: be swift and strong in war, noble and wise in peace, and above all else, show no mercy to your enemies.

First and foremost, The Lion and the Lilies is a historical mod. Its primary mission is to create a historically-accurate, playable, and (of course) enjoyable simulation of 14th century Europe, Africa, and Asia. Despite the name, the focus of the setting is not limited to western Europe: as much attention will be given to India or Egypt or Poland as to England and France.

For the time being, alterations to the base game will primarily consist of the new bookmark and characters required to populate it, as well as balance adjustments to promote historically-plausible AI behavior and gameplay and to minimize immersion-breaking occurrences.

This mod is still very much in its early stages, and is for the moment the product of a very small team (and originally a team of one): there remains a great deal to be done, and undoubtedly issues will arise. Nothing that you see is final, or even necessarily in its ideal state. Fixes, updates, and improvements will be forthcoming, but we ask for your patience and understanding.

Disclaimers aside, we hope that you enjoy the mod, and we look forward to tales of your adventures.

* Explore the world of the 14th century through an entirely new start date, May 24th 1337. Invade France as the Young Lion of England, reestablish Angevin primacy over the Aegean as the Solomonic Robert of Naples, or restore Denmark to glory as Valdemar the Dawnbringer.

* Hundreds of new counties to conquer, cultivate, or bestow upon your relatives and favorites as you please.

* Development levels and buildings representative of historical population levels: control over great cities and ports now offers immense riches to those bold or clever enough to take them, and enemy legions will break their strength against the walls of your mighty fortresses.

* Primogeniture-based succession and more stringent consanguinity doctrines, representative of the standards of the era, allow for more inheritance-based marital strategies: obtaining a rich heiress will be a truly great prize indeed.

The mod is currently playable with a 1337 start date: our immediate need is for developers to help with filling in the blanks, replacing placeholders, growing family trees and expanding on existing dynasties, populating courts with historical figures, making title and province history changes where necessary, and crafting appropriate coats of arms. Balance testing, bug-hunting, and adjustments are, of course, always necessary. As future expansions and patches are released, more involved work will be required to take full advantage of their features and improvements.

Ultimately, we intend to go beyond the traditional last start date into the late 14th century and 15th centuries, extending the Crusader Kings gameplay experience into entirely new territory, such as the conquests of Tamerlane, the last days of Byzantium, the Medici of Florence and Sforza of Milan, and the War of the Roses.

If all of this has piqued your interest and you'd be interested in lending a helping hand, feel free to send me a message!

I’m amazed at the quality of this mod. Well done!

ibrahim100 said:
I’m amazed at the quality of this mod. Well done!
Click to expand...

Thank you very much! It's still absolutely the early days, and there's a great deal more that I hope to do with it. I've updated the initial post with some of what the future holds, as we fully intend to progress beyond 1337 once we're satisfied that it's complete. For anyone else checking in, I'll also note that, being an undertaking as large as it is, we are currently recruiting: the details have also been added above.
Expand signature
The Lion and the Lilies: A Hundred Years' War Mod for Crusader Kings III

I keep pondering a 936 scenario but it seems like a ton of work and I don't know how many people would be willing to help.

Best of luck with this, 1337 is a fun start date with loads of interesting historical people around. You should make John the Blind an interesting character.
Expand signature
CK III projects:

Pied-Noir said:
Best of luck with this, 1337 is a fun start date with loads of interesting historical people around. You should make John the Blind an interesting character.
Click to expand...

It's funny that you should mention John the Blind: he's actually one of the central historical figures that inspired this mod, and my personal favorite bookmark character. Be assured that the red lion of Luxembourg will receive his due.
Expand signature
The Lion and the Lilies: A Hundred Years' War Mod for Crusader Kings III

Hey, just two things I noticed while playing the Byzantines.
1. You should add friendship between 465500 (Andronikos Palaiologos III) and 465530 (John Kantakuzenos), as they were historically good friends
2. Maybe the Turks could receive a modifier to prevent an immediate Orthodox Greek revolt from taking control? It's basically impossible to play as the ottomans as a revolt 2x your size spawns in a month. I really don't know how to mod this, otherwise I woudl help. :/
Reactions:

ibrahim100 said:
Hey, just two things I noticed while playing the Byzantines.
1. You should add friendship between 465500 (Andronikos Palaiologos III) and 465530 (John Kantakuzenos), as they were historically good friends
2. Maybe the Turks could receive a modifier to prevent an immediate Orthodox Greek revolt from taking control? It's basically impossible to play as the ottomans as a revolt 2x your size spawns in a month. I really don't know how to mod this, otherwise I woudl help. :/
Click to expand...

I appreciate the input! Any and all suggestions and feedback are entirely welcome and much appreciated.

1. The Byzantines are in definite need of an overhaul: I've been looking into sources to more accurately represent the general situation before the civil war, and things should look more realistic when the next update releases.
2. Peasant revolts have been bothering me, as well - in general, I feel that they're far too common, even in the base game. As soon as I figure out the precise controls for them and balance-test the outcome, this will be addressed, because the instability in Anatolia and the Golden Horde is a major issue right now.
Expand signature
The Lion and the Lilies: A Hundred Years' War Mod for Crusader Kings III
Reactions:
W

Choose king Edward .
have 4500 soldiers.
crush by 19000 strong french in one minute after start.
I even don't have longbow tech.

wzfcns said:
Choose king Edward .
have 4500 soldiers.
crush by 19000 strong french in one minute after start.
I even don't have longbow tech.
Click to expand...

While I haven't encountered quite this level of power imbalance, this should be less of an issue after today's update: Edward now starts out with a slight numerical advantage over the French. And he has longbows.

And, on another note, we now have some very attractive and bold new borders, courtesy of YTnuBF's Black Borders mod. They're much appreciated! 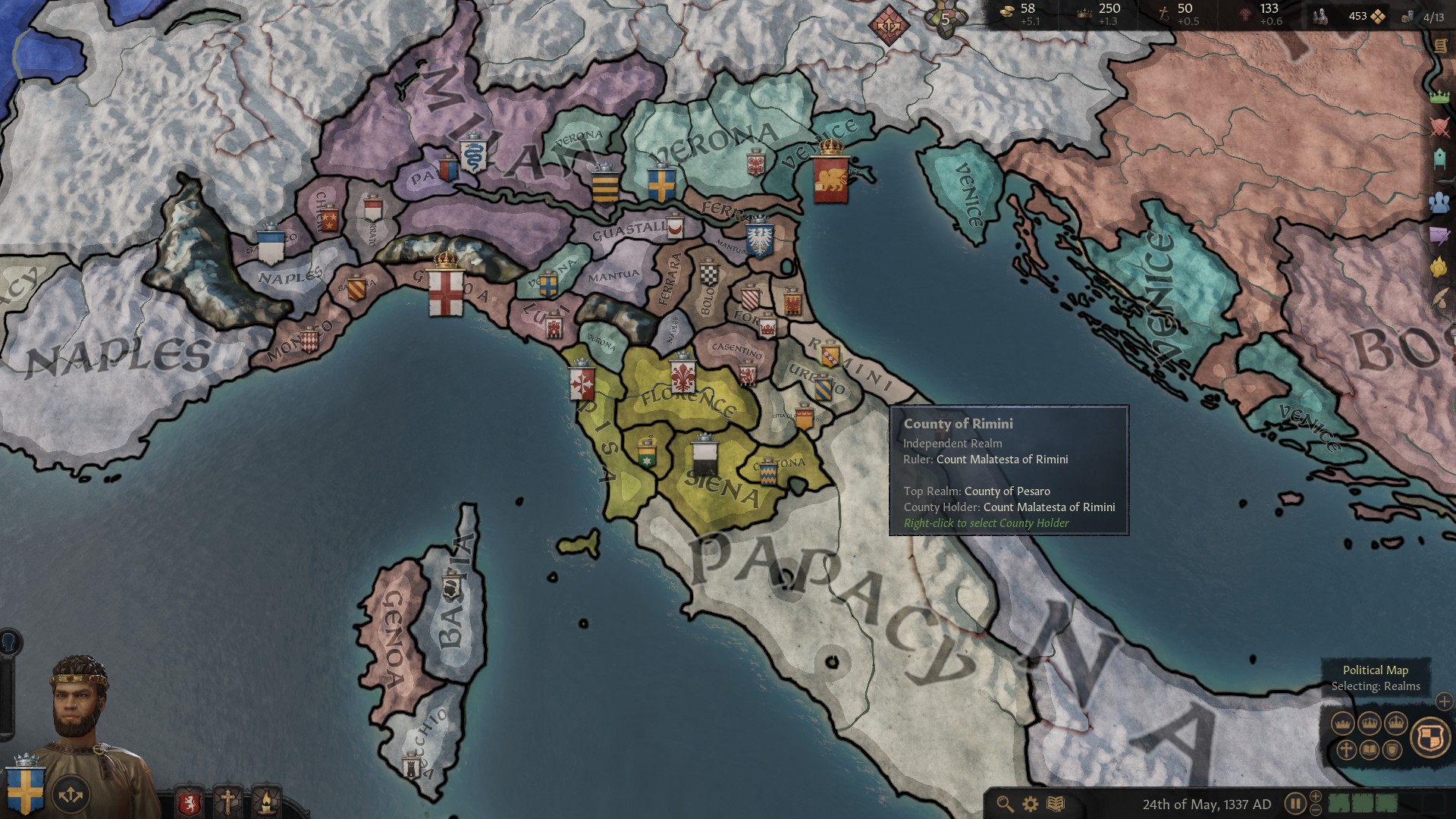 Well, as much as I normally dislike following up one of my own posts with another, this one seemed worth making. The latest update is out, bringing with it the long-awaited incorporation of the Capetian branch families into the broader dynasty. Other improvements include substantially expanded family trees for the Percies in England and FitzGeralds in Ireland, the Teutonic Knights and Hospitallers have been converted to theocracies for the time being (the holy order government type has an unfortunate tendency to convert itself away almost immediately - turning into inconvenient feudal dynastic states), Edward has some new allies in his war against the French to counter the Capetian juggernaut, and a few worthy new faces to behold (many thanks to lindest for these!). As always, there's plenty more to come, including breaking the Angevins down further into their squabbling branches, more expanded family trees, and presumably persuading the AI to put down whatever strange new chew toys it comes up with (really, Hungary, do you have to invade Naples every time?). 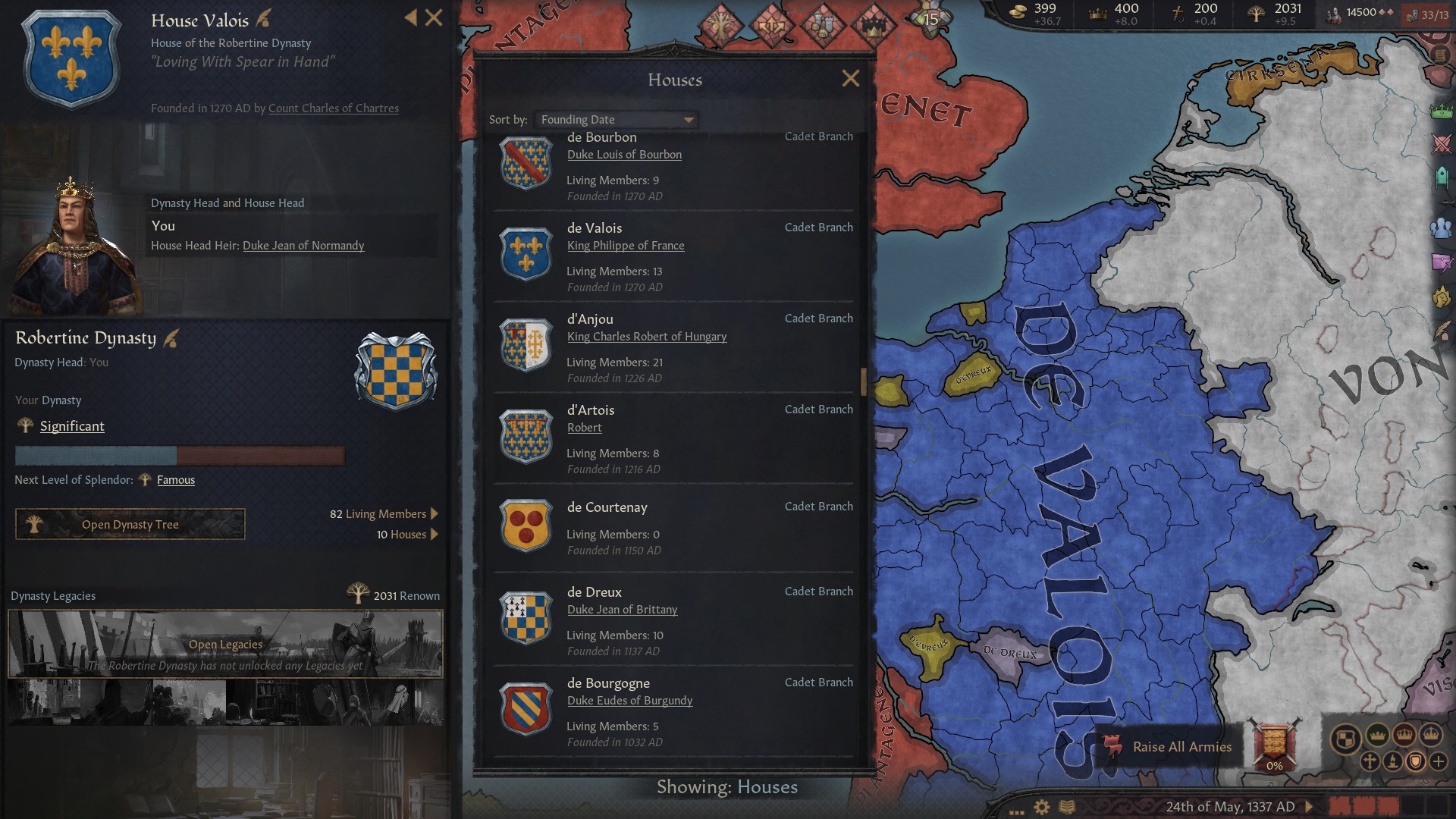