Jump to latest Follow Reply
Menu
Install the app
You are using an out of date browser. It may not display this or other websites correctly.
You should upgrade or use an alternative browser.
Show only dev responses
X

After working on this for about four months, here is Teleglitch: Slaughterhouse.

If you're one of those TL : DNR peeps and you just want a link to the D/L, the link is here:

INSTALLATION
Simply unzip the files and overwrite the files in your Teleglitch directory.

HOW TO UNINSTALL
The easy way: run Steam's cache integrity check. Steam should overwrite all of the files and return Teleglitch to 100% Vanilla status.

However, if you are paranoid that Steam's cache check won't restore the game back to Vanilla later (as if you'll ever want to play Vanilla again, lol), you can save all of your existing files first. The mod changes just about every file in every single folder other than the shared_library file, and changes two core CSVs. So make sure you back up everything. Really, just doing an integrity check should work, though.

FEATURES
So, for folks who actually wanna read stuff, here is a short breakdown on the features.

This is completely different than anything that's been done with Teleglitch, thus far; by using some Lua and GLSL, the game looks, feels, plays and is generally very different.

Think "Crimsonland, Doom Hell Mode and Blasteroids made a zombie baby". This is a much more action-based, fast-paced version of Teleglitch with a totally different difficulty curve. Early game is pretty easy. Late game? Not so much.

So, if you love the idea of blowing through giant hordes of zombies with dual-wielded SMGs, roasting the enemy with a flamethrower, or even just the idea of having functional flashlights (what a concept, lol)... this might be the mod for you. It's just plain fun.

Just a few of the new / unique features, in no particular order:

2. Totally remastered art. Just about every pixel has been worked on at some point.

3. Complete overhaul of the level balance. Early levels are easier than later levels, rather than the other way around (at least, that was my take on Vanilla).

4. The game's GLSL shaders were re-written so that the system of light and darkness is taken to a whole new level. Soft shadows, better handling of pixel transitions and some built-in aliasing.

5. A complete setup for future modders to build new weapons and things with, with a few caveats. Custom projectiles, custom enemy projectiles, ways to de-couple player weapon types from entities so that they can be customized / balanced for SP, etc.

6. Weapon rebalance; the objective is to make every gun useful and have a distinct niche, and every weapon has a long-term customization path.

9. Much more of an emphasis on action, much less emphasis on ammo conservation. Kill things. Fear things. Don't fret too much about ammo; you'll be stripping it from the dead soon enough.

10. More guidance in the UI about things; for example, an unloaded gun shows up on the ground with a different color than a gun that still has bullets in it. The Items menu is more readable and less cramped-feeling. The only part of the UI I didn't get to was the Monster List area- maybe later.

Anyhow, that's roughly it, without spoiling it for you folks. Please let me know if you hit any bugs; I will probably release a patched version when those are all in. If you hit a bug that causes a crash or other seriously-bad behaviors (level can't be finished or whatnot) then please copy-paste your stderr.txt file to a site where it can be read, rather than cluttering up the thread here, or just post the Lua error, if you can find it (practically any major bug you hit will be a Lua error).

If you have kindly, constructive ideas about how to improve various areas of balance or thoughtful ideas about new features after you've given it a few hours (and preferably, after you've managed to complete a game from Level 1), please let me know. 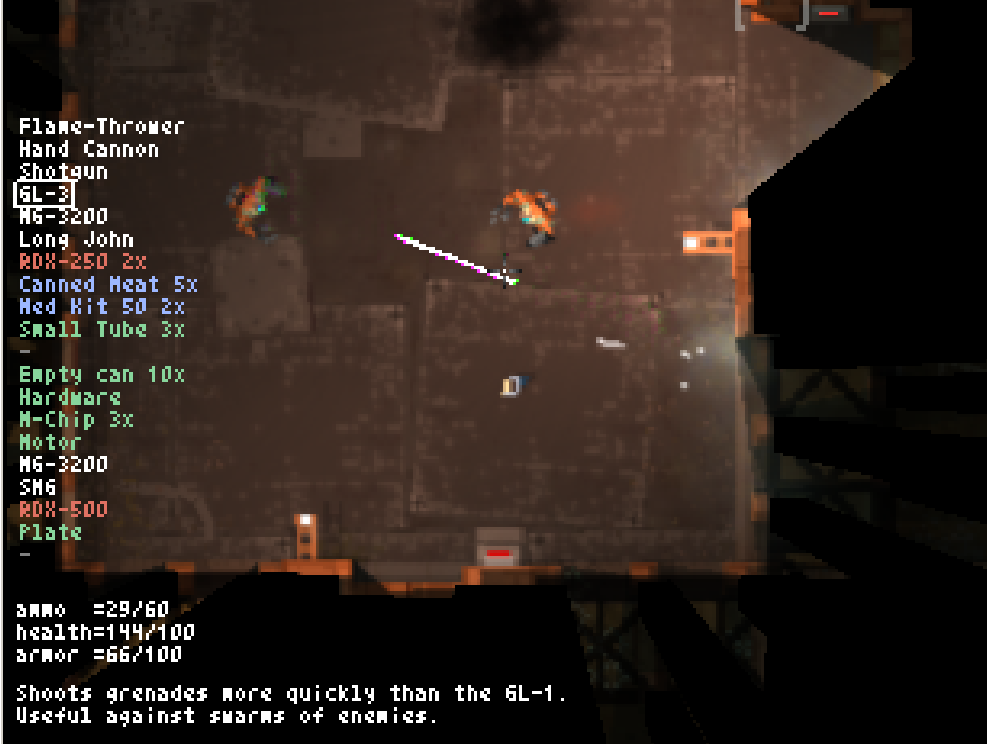 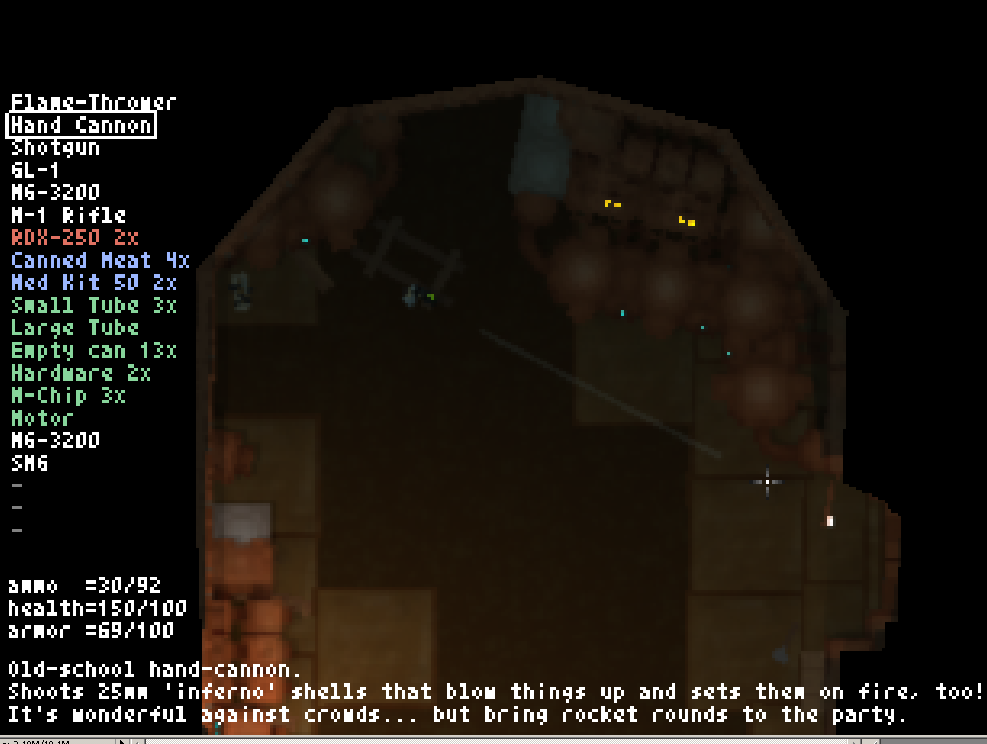 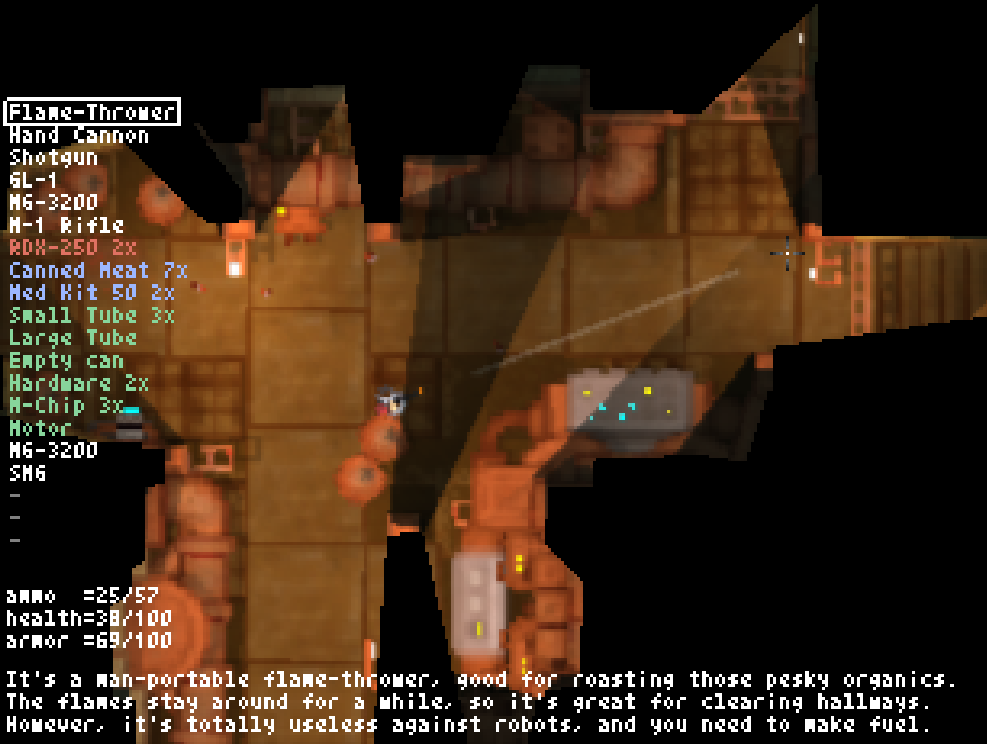 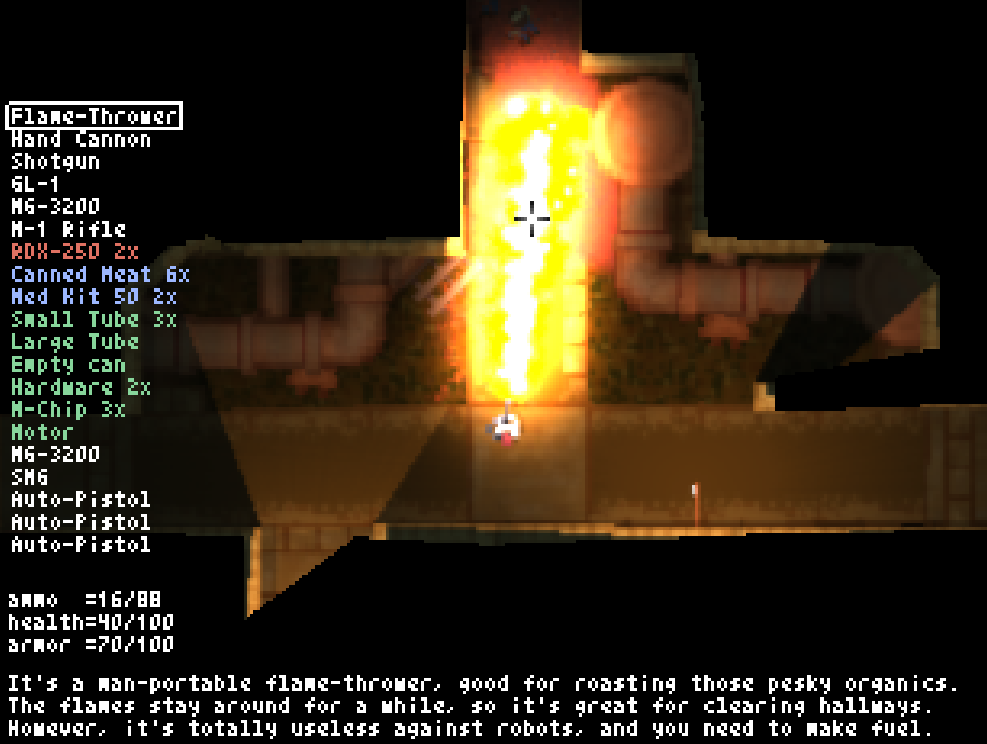 Great, let me know if you enjoyed it

Hey, so a little feedback!

Were these fixed, I would unreservedly love the mod. Despite never really getting past the absurd rushes in level 5.
M

Ok a LOT of things need to be fixed in this mod
1. The dynamite is too fucking strong. Even if you hide behind a wall the thing will kill you but won't scratch anything else.
2. The gatling revolver doesn't fire anything yet it spends ammo.
3 I get it that this mod is called SLAUGHTERHOUSE. BUT certain enemies are WAAAAY fucking impanatrable. Like blue mech with double shotguns. Literaly i found nothing that can take down that thing.
4.Like in number 3 but bit diffrent it's not fun when you exit the first room of the level and you imediatly get zerg rushed by ninja scientists and guards. It just isn't fun.
5.Most weapons are compleatly useless flamethrower as epic as it is doesn't damage organics that much. The rocket launcher and grenade launcher are also pure shit since they also don't do damage, not to mention when i shoot someone with GL enemies are sucked towards me (What?)
This mod is epic and i am sorry that i have to bash it with these things. But you can't just put mod that makes game unbeatable.

So my own take on those:

3) I didn't have as much of a problem with this. By the time I got to blue mech I had insane amounts of battery and a laser SMG, so I don't think I would have TRIED to take on the BW with a double shotgun. They go down fine to lasers.

4) I honestly think boss floors are bugged. In levels 6 and 8 literally every enemy in the level charges you at your starting location. If that's on purpose, you should say so! Like, there'll be this enormous brawl in the beginning, I'll die a few times and use teleporters to revive, then the rest of the level besides the boss is just EMPTY.

5) I don't know about MOST weapons, but I sure only made the flamethrower once. It's just not worth it, late-game. It's fine for an arena showpiece! My problem is more that because we have lots of resources, some guns become almost interchangeable.

Bacter said:
So my own take on those:

3) I didn't have as much of a problem with this. By the time I got to blue mech I had insane amounts of battery and a laser SMG, so I don't think I would have TRIED to take on the BW with a double shotgun. They go down fine to lasers.

4) I honestly think boss floors are bugged. In levels 6 and 8 literally every enemy in the level charges you at your starting location. If that's on purpose, you should say so! Like, there'll be this enormous brawl in the beginning, I'll die a few times and use teleporters to revive, then the rest of the level besides the boss is just EMPTY.

5) I don't know about MOST weapons, but I sure only made the flamethrower once. It's just not worth it, late-game. It's fine for an arena showpiece! My problem is more that because we have lots of resources, some guns become almost interchangeable.

With number 3 that IS the problem when they come in large numbers. Few days ago i managed to pass him only to be met by 2 of those fuckers in next level. Only way i can run is back towards starting point and when i die there they keep killing me over and over again. Eventually i managed to pass them only to be met by 7 of those on LAST level. Not even MINIGUN can back them off.

As for 4 yes that might be, but i think i also forgot to mention that you can drag bosses outside of the arena without entering it first.

5 nothing to say there

as for 6 no just no that thing never helped against anything. Maybe war walkers and squids but its useless.

Besides the final boss, it one-shots anything in the GAME. So...
X

Alpha 6 has now been released.

1. Fixes for the reported shader bugs. This won't fix the problems on certain Intel chipsets, but it should address the bugs on ATi.

2. Revamped spawn system; monsters now spawn in a way that doesn't involve giant patrols, allowing the player a little more early exploration, rather than dying immediately on entering a new level. This does NOT mean that Slaughterhouse got easier to beat, mind you; it means that you're less likely to die at the beginning of levels, but are going to have some very difficult encounters later on in a level.

3. Difficulty ramp has been adjusted again; it's quite difficult to beat the mod right now, but just barely possible. Players will not be complaining they have too much Canned Meat, and you'll want to start crafting weapons early and often.

4. I have purposefully not included Settings.lua this time, so that people who preferred the middle-mouse-wheel functionality of Teleglitch's default gameplay can keep it. I originally wrote this mod on a machine where the mouse-wheel was disabled, so I made a change there that isn't relevant to 99% of players.

Future of the Mod: given that this release will probably have an audience of like, 5 people, if I update it again, it'll be to add more fun things that didn't get on my list; amongst other things, I thought that a Grenade Launcher that spawned multiple Nail Grenades (as an alternative to the RL-1) might be fun, and I thought that perhaps the Dual SMGs needed a further upgrade to make Pistol ammunition continue to have some relevancy in late-game play. I'd also like to hear people's feedback about what weapons they'd cut / add in general; given the current limitations of the engine, I can't really do a lot of things, but we'll see!
Show hidden low quality content
You must log in or register to reply here.
Share:
Facebook Twitter Reddit Tumblr WhatsApp Share Link
Top Bottom