Menu
Install the app
You are using an out of date browser. It may not display this or other websites correctly.
You should upgrade or use an alternative browser.
Crusader Kings II 69212 Bug Reports 19599 User Modifications 10384 Suggestions 5826 Tech Support 6264 After Action Reports

Reposting the thread, as the other one was too old to reply to.

Bored of having to be a (mostly) secretive Satanic cultist? Well now you can announce your heretical beliefs to the world, and purge the non-believers (or be purged). 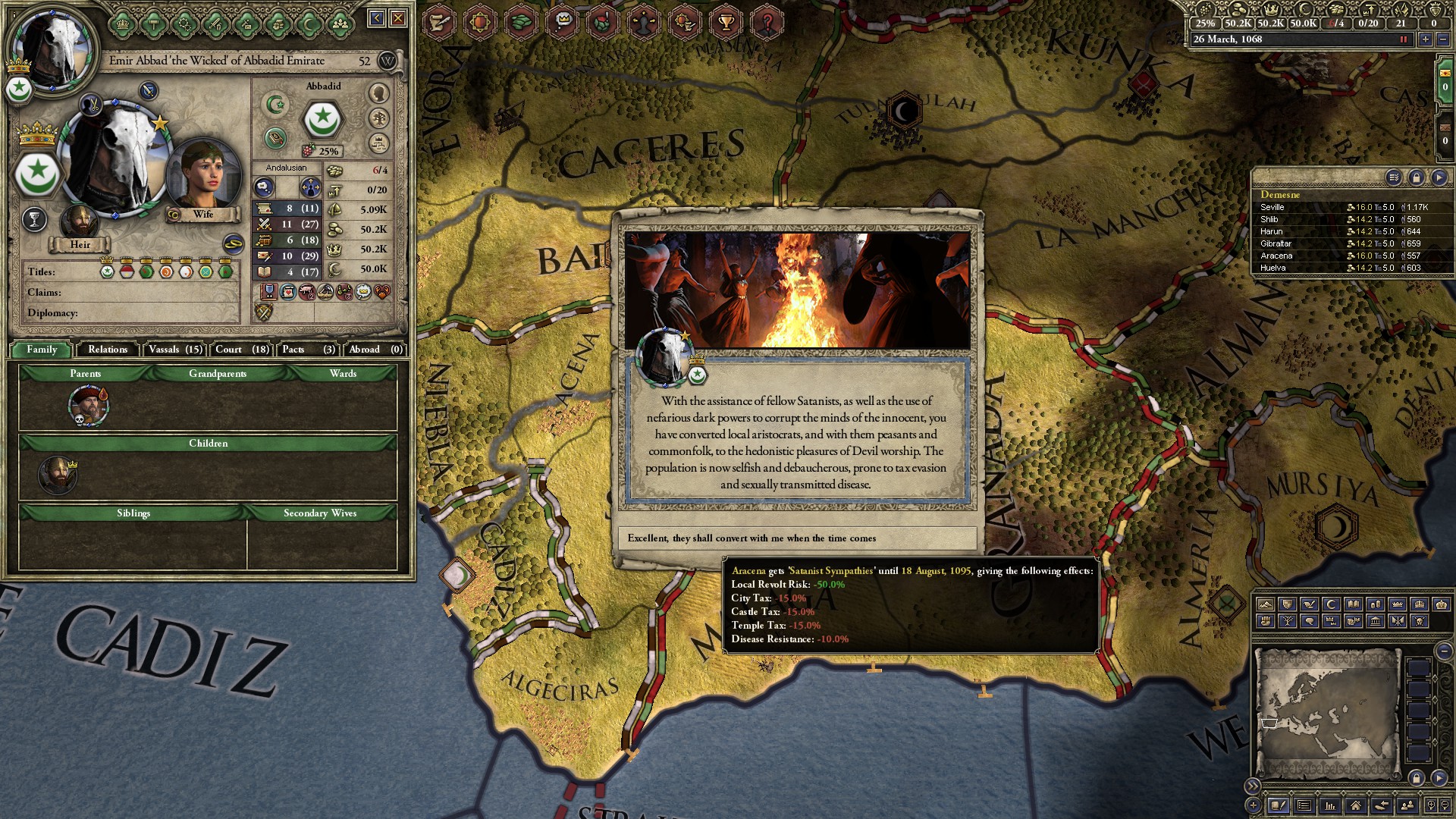 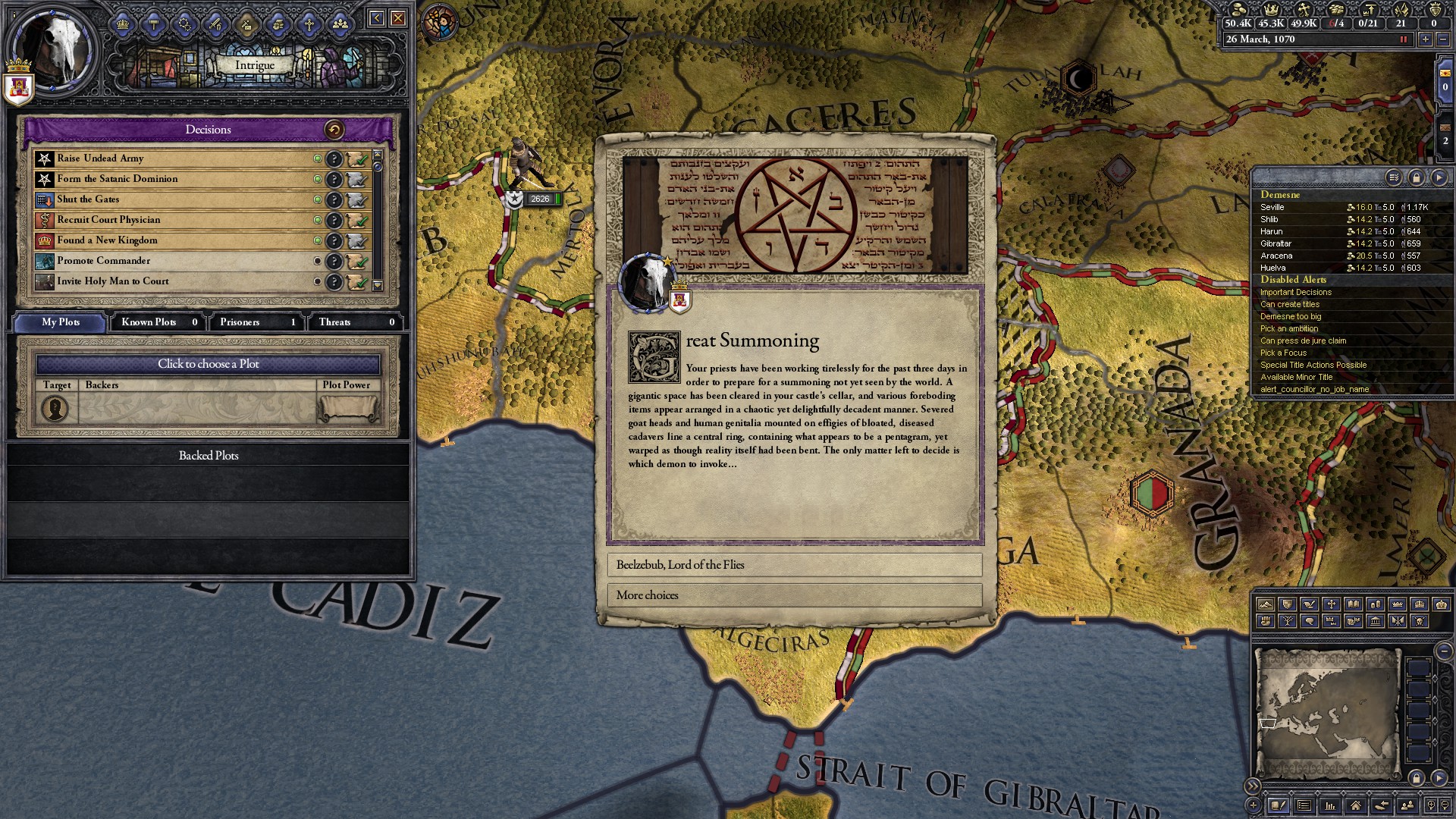 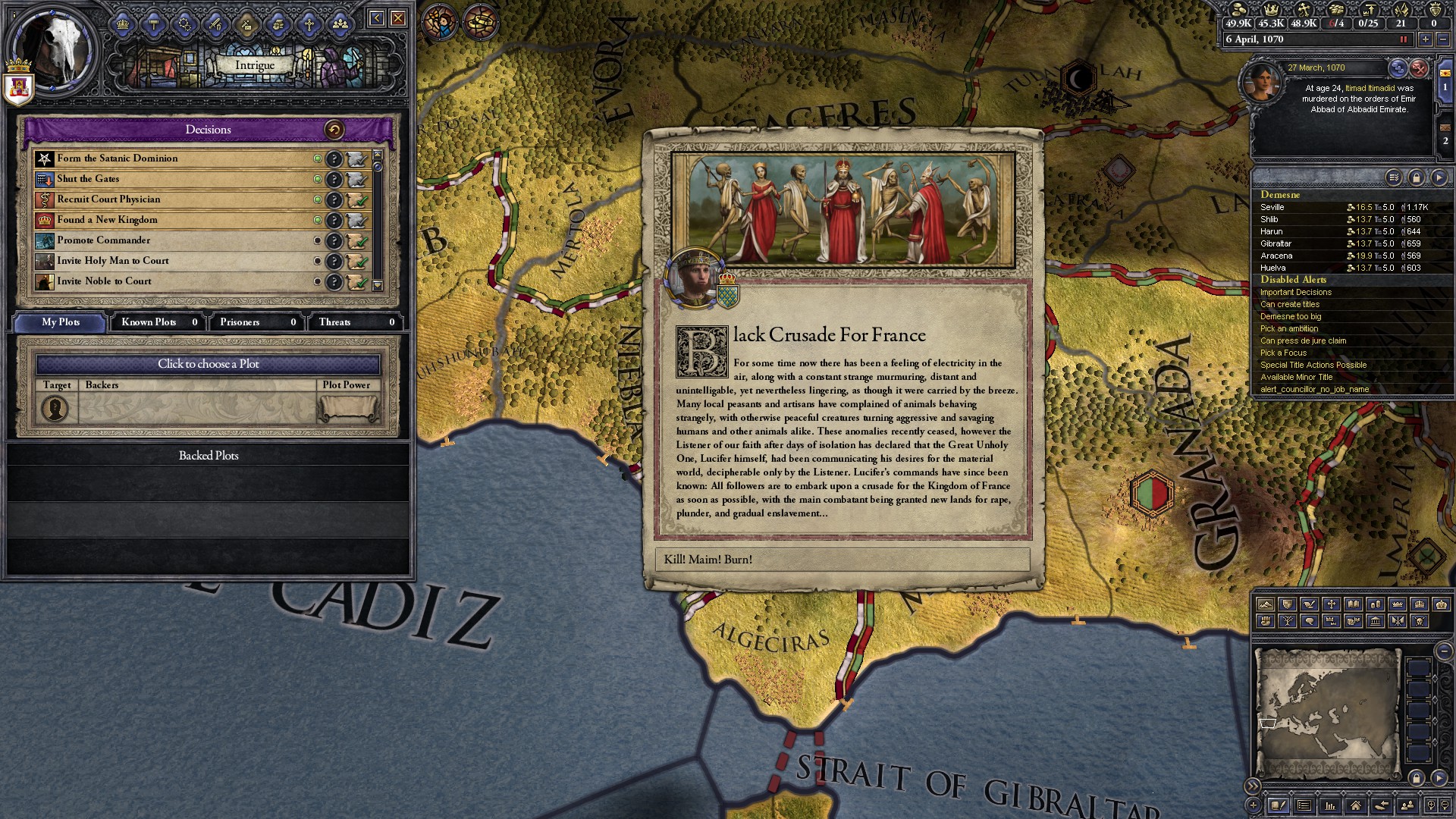 Download:
http://www.mediafire.com/file/ce53afs29xah61t/satanismPlus2.8.2.zip - v2.8.2 - Removed all special Satanic sin/virtue traits and replaced them with triggered modifiers. The special traits were causing problems with vanilla events and decisions which required the normal traits as conditions for triggering

Extract the .zip to documents\paradoxinteractive\crusaderkingsii\mod\

If there's a previous installation of this mod, delete it first.

NOTE: I don't check this forum much, so if you want to guarantee that I see a suggestion/bug that you're thinking about, try posting it in the Steam workshop thread for this item (http://steamcommunity.com/sharedfiles/filedetails/?id=918939555).
Toggle signature
Satanism Plus - A Satanic religion, and more events/decisions pertaining to a fictionalised idea of Satanism.

Very nice. A suggestion, however: Use satanic_church_opinion in the triggered_modifiers file, as I believe church_opinion is a legacy modifier that affects all clergy, regardless of religion. If you take this route, you'll have to add satanic_church_opinion to 00_modifier_definitions.txt as well.
Toggle signature
CK2 Mods:
Moons Phases & Seasons, accurate historical dates for moon phases, solstices, and equinoxes, compiled with Python scripts (included) from a NASA ephemeris.
Generic Religious Icons, a collection of 24 distinct religious symbols in three color schemes each, with reformed and heresy variants, for a total of 216 icons.

Thanks, I'll take a look.

After checking, it seems that church_opinion, at least in the traits file, only affects church characters of one's own religion. Other non-Satanist clergy aren't affected by traits with that line.

With triggered modifiers, church_opinion seems to have no effect at all on anyone. I'll fix that up. I've tried altering everything, and still the same issue persists. The opinion modifiers just don't affect anyone, Satanic or not.
Last edited: Jun 8, 2019
Toggle signature
Satanism Plus - A Satanic religion, and more events/decisions pertaining to a fictionalised idea of Satanism.
Show hidden low quality content
You must log in or register to reply here.
Share:
Facebook Twitter Reddit Pinterest Tumblr WhatsApp Email Share Link
Top Bottom