Menu
Install the app
You are using an out of date browser. It may not display this or other websites correctly.
You should upgrade or use an alternative browser.
Stellaris 42899 Bug Reports 23146 Suggestions 13091 Tech Support 2178 Multiplayer 326 User Mods 4133 Stellaris AAR (After Action Reports) Console edition 934
M

One of my biggest complaints about industrial districts when they were announced is that they don't serve their stated purpose very well. They don't really reduce micro much, because the vast bulk of a lategame empire is research. Considering that they had a whole new model for forge/foundry districts, I thought they should've extended this model to research as well. Seeing as how they didn't do that, I decided to make my own mod for this: 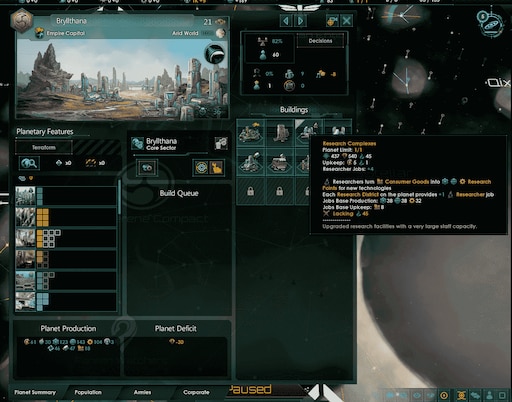 
This mod does for research what the 3.0 "Dick" update did for alloys and consumer goods. It turns the main source of researchers (and gestalt equivalents) from buildings to districts, with the former job building (research labs in this case) adding researchers to those districts.

This mod adds both regular and arcology planetary research districts to the game, and as such requires UI Overhaul Dynamic or some similar mod to actually display all the districts. Research districts have the same overall stats as industrial districts (2 housing, 2 jobs, urban district for the purpose of ecumenepoli, same cost and build time) and likewise for the arcology equivalent. Habitat and ringworld science districts also get the equivalent bonuses from research labs that their vanilla counterparts do from manufacturing buildings. Research labs are now a planet-unique building.

Planet and sector automation are both fully supported.

From my testing (0.25 habitables, commodore, no guaranteeds habitable worlds), the AI is able to handle research districts, but it isn't very good at specializing worlds. If you find the AI suiciding itself by overbuilding researchers, tell me and I'll write an event to fix that, but I didn't see that happening in my testing.