[MOD RELEASE] Beginning of the End: A 15th Century mod is now available!

The medieval era is nearing its end, and the world is undergoing considerable change. In Europe, the grip of medieval thought is loosening within the Italian Republics, as groundbreaking discoveries and rediscoveries are made. Interest in Europe's Roman heritage is growing once again, which is introducing floods of radical ideas. Advancements in architecture, philosophy, art, politics and even language are all happening at an alarming rate. Meanwhile, in the east, the last great Mongol conqueror, Timur, has carved out a huge empire for himself, sending the Golden Horde into chaos and threatening other great Muslim powers with destruction. Both the Ottomans and Mamluks are under attack from the Timurid forces, as he shows no sign of stopping his rapacious conquests. It would take death itself to put an end to that man... 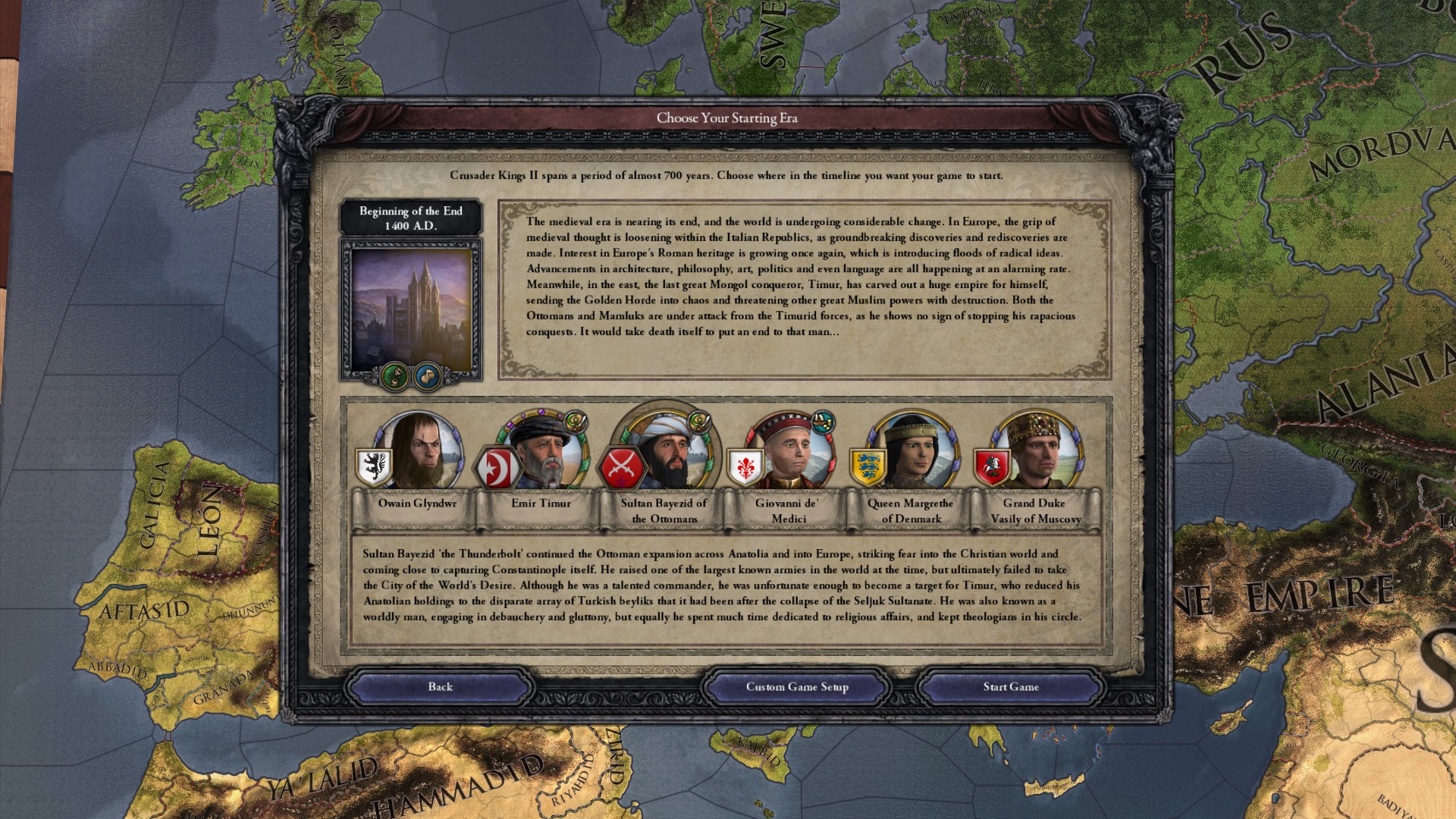 At long last, Beginning of the End is available for you to try! If you want to read more about it, Dev Diary #000 explains the vision for the mod, and the subsequent diaries set out the vision for many different areas of the map. Here I will explain the contents of the mod available so far and what to expect over the coming weeks. (If you just want to download the mod, skip to the end!)
Over half of the map is playable, including, probably most importantly for most players, the entirety Europe and much of the Near East. The map below shows all the provinces (in red) currently selectable on the character selection screen (obviously theocracies and regular republics are still unplayable). As you can see, there is plenty available! 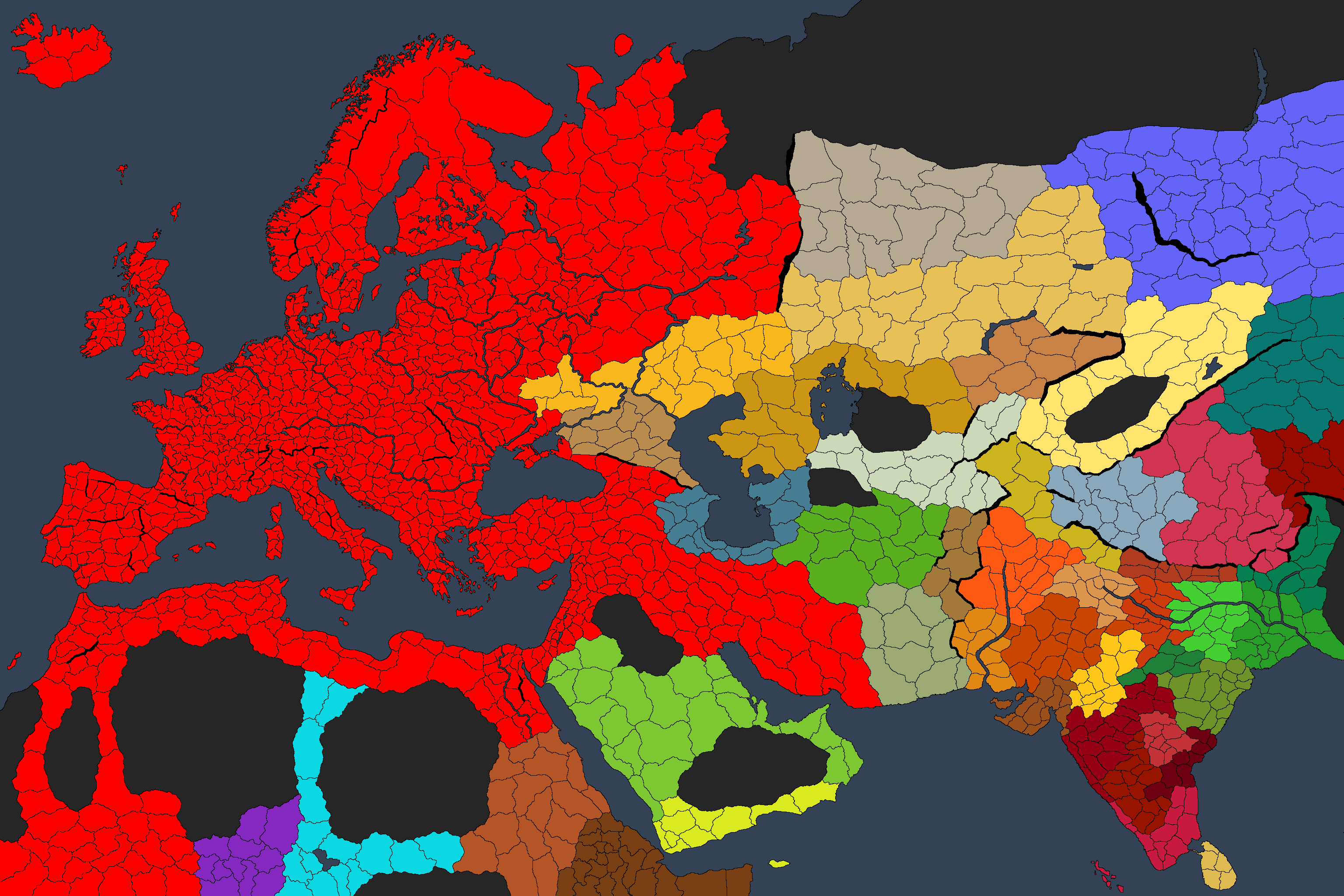 Below, you will find screenshots of various parts of the map with links to associated dev diaries where applicable. 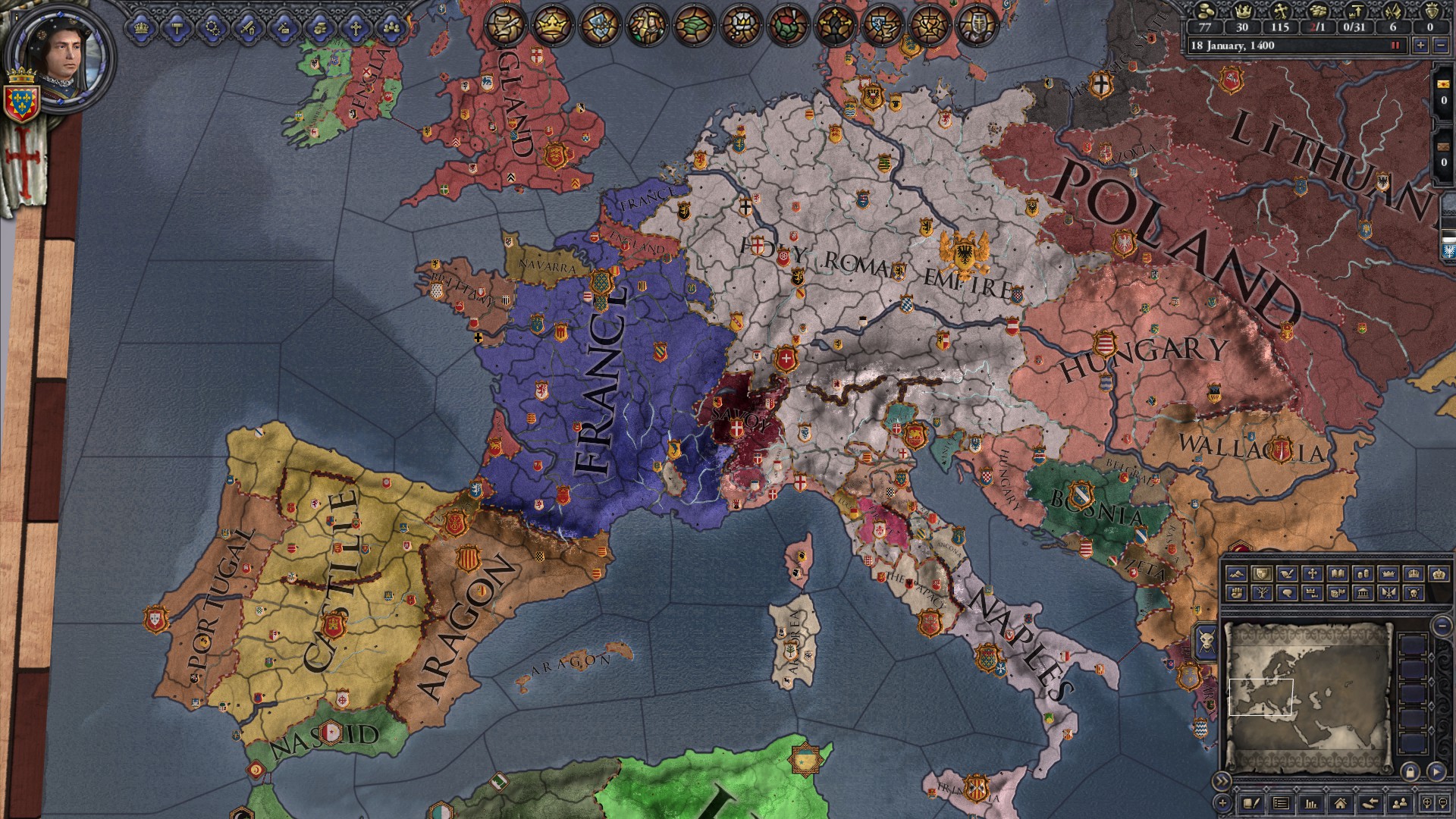 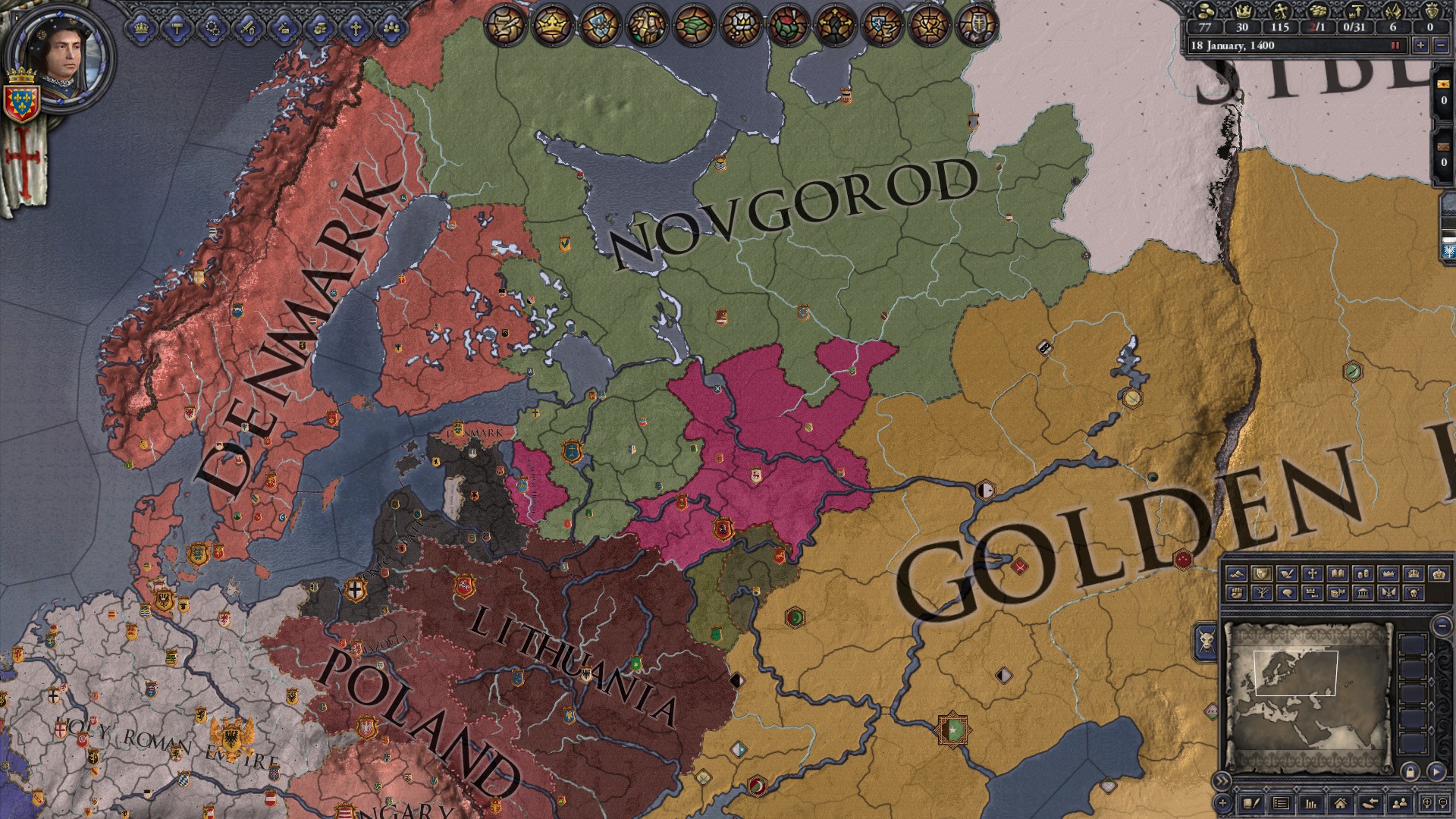 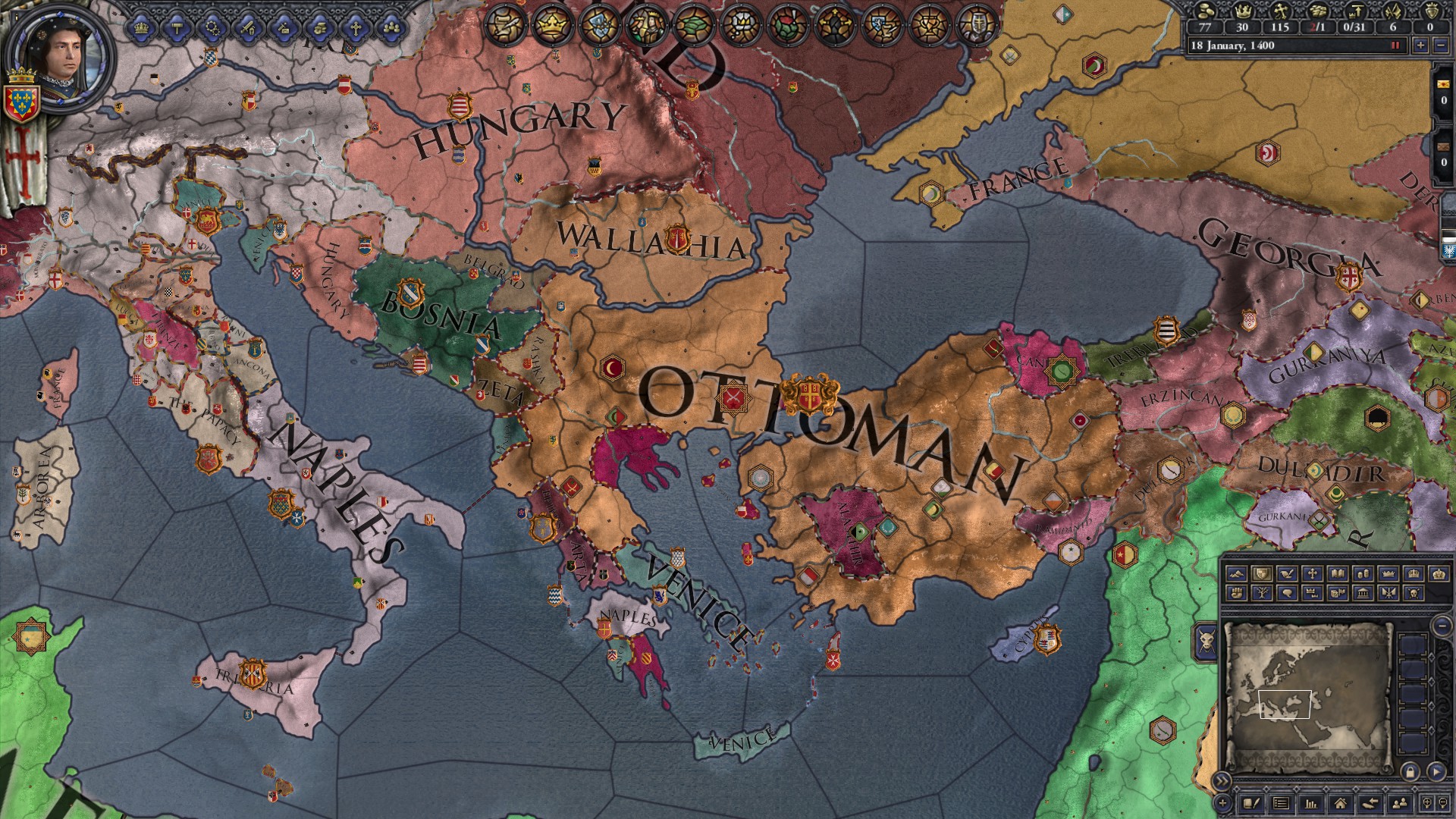 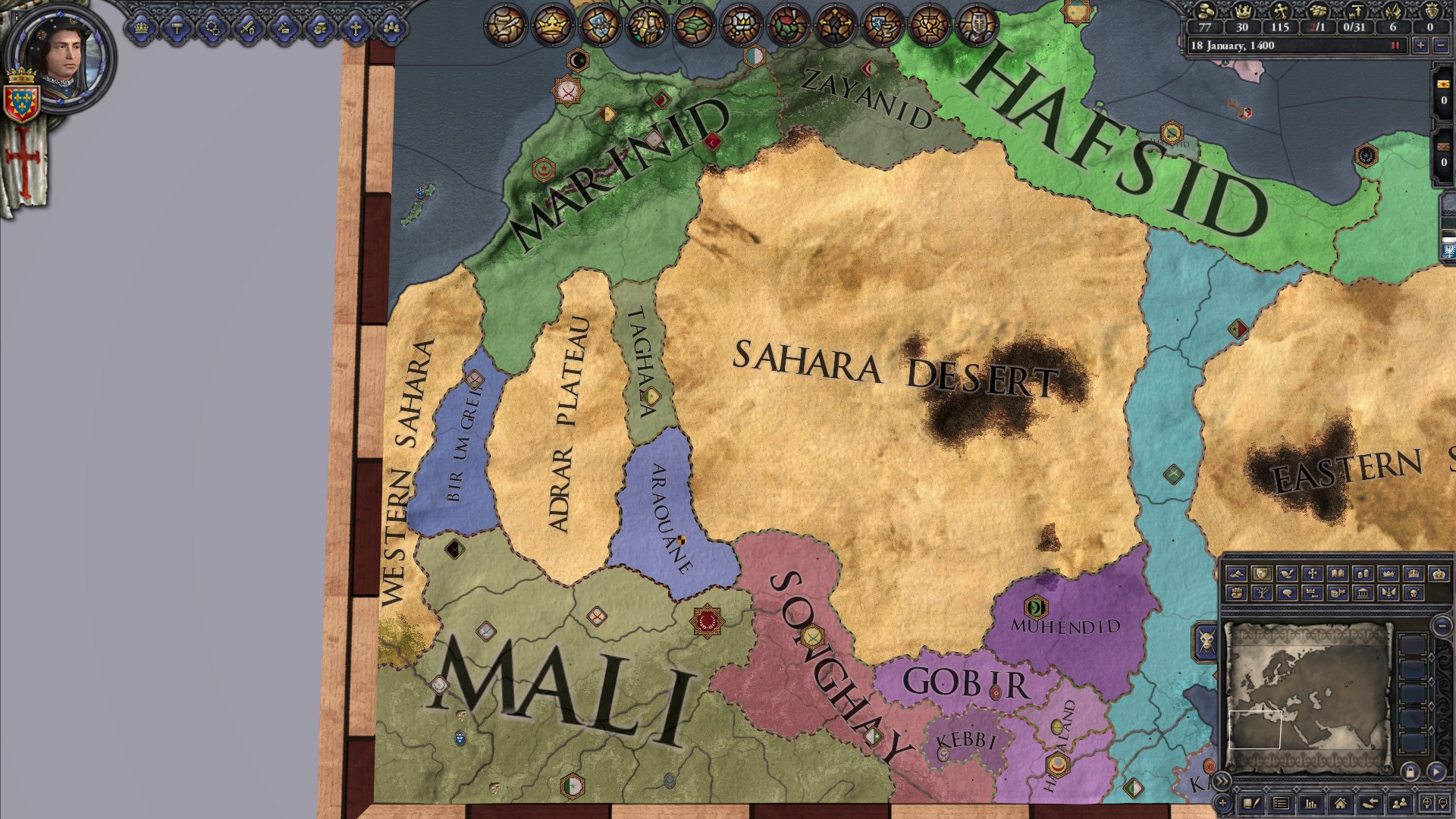 There is also some early content for the Renaissance. The screenshots below demonstrate some of the initial decisions, events and other flavour. 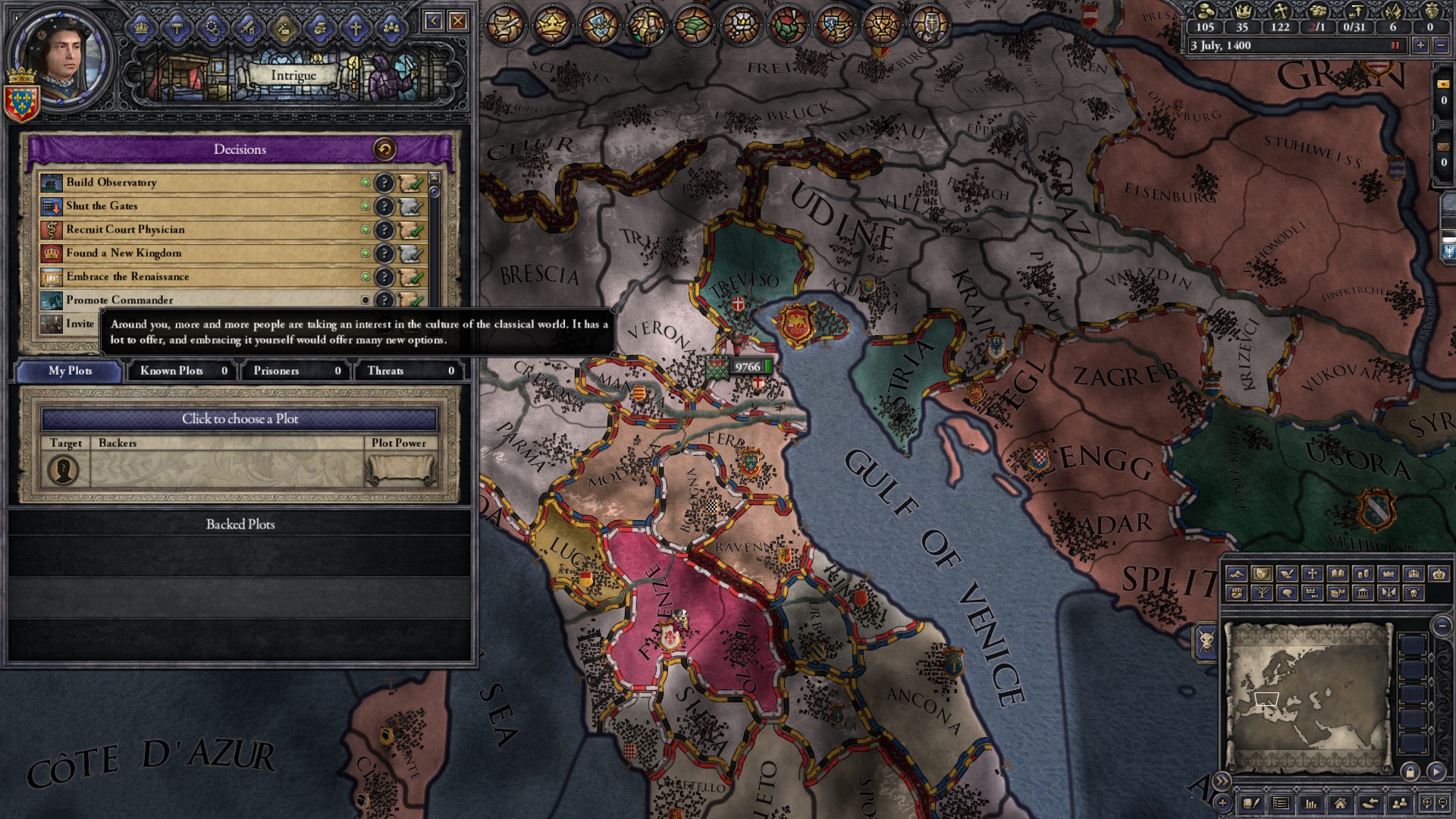 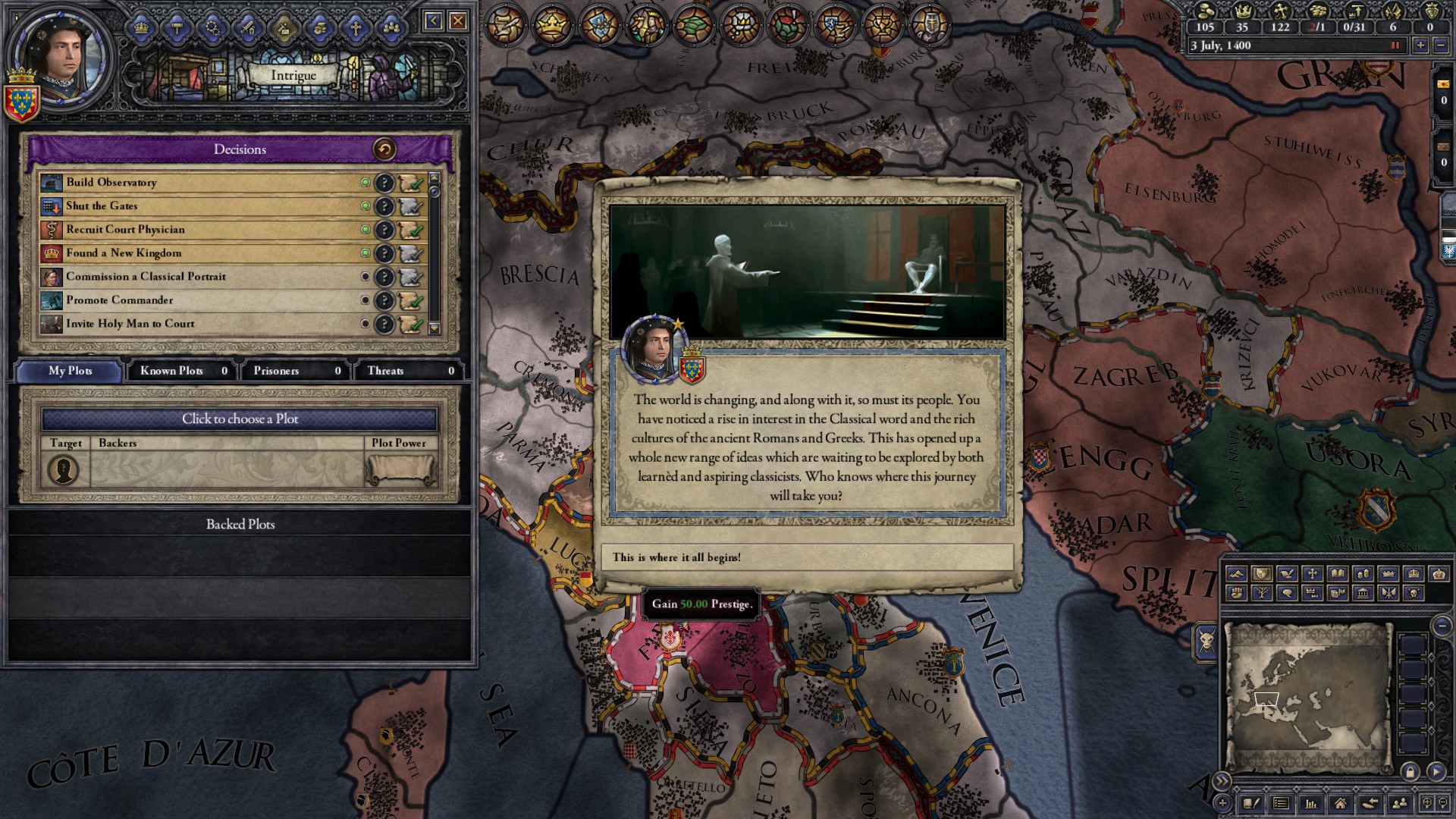 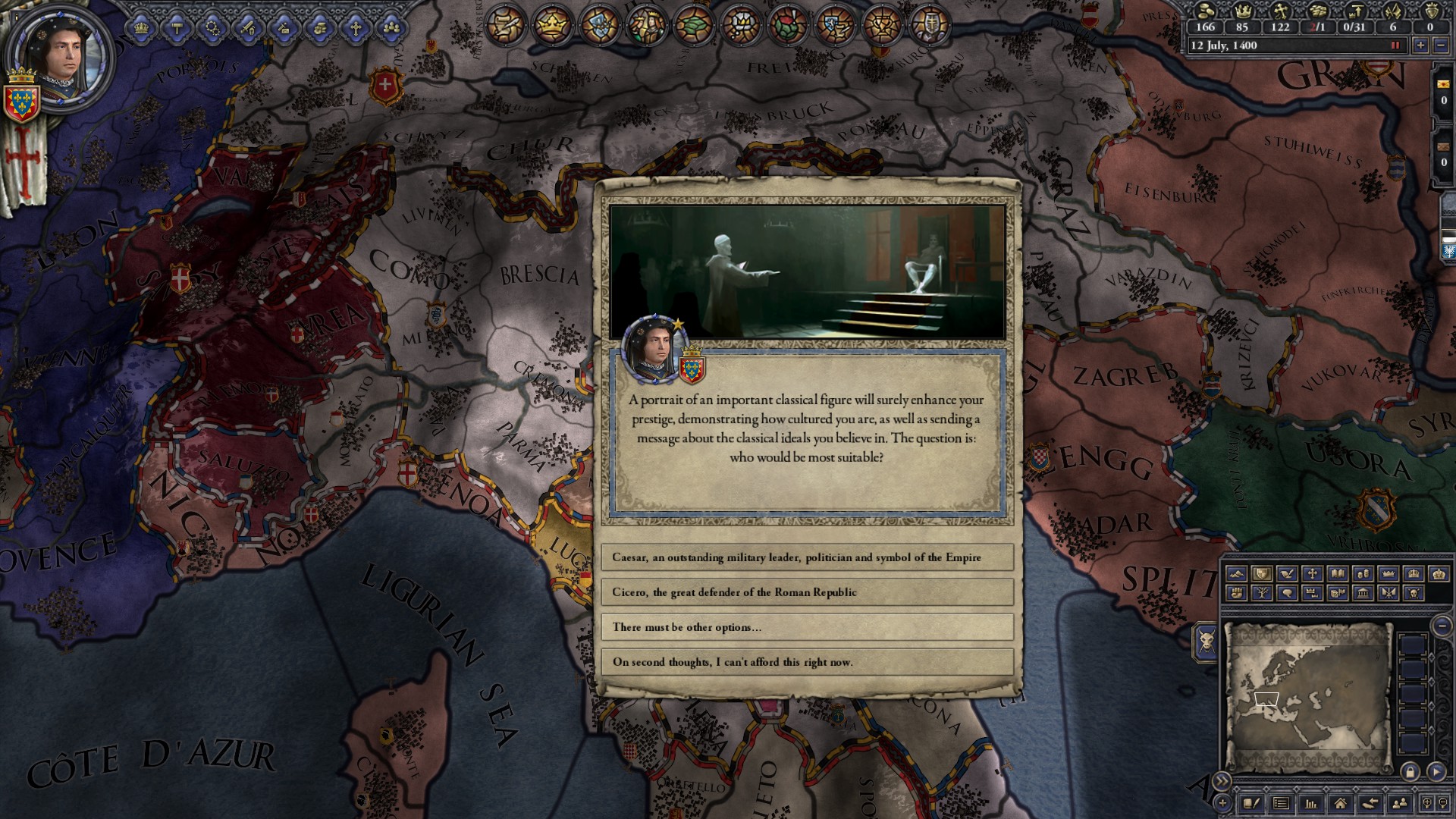 Currently "Commission a Classical Portrait" is the only unique Renaissance decision, but more will come! 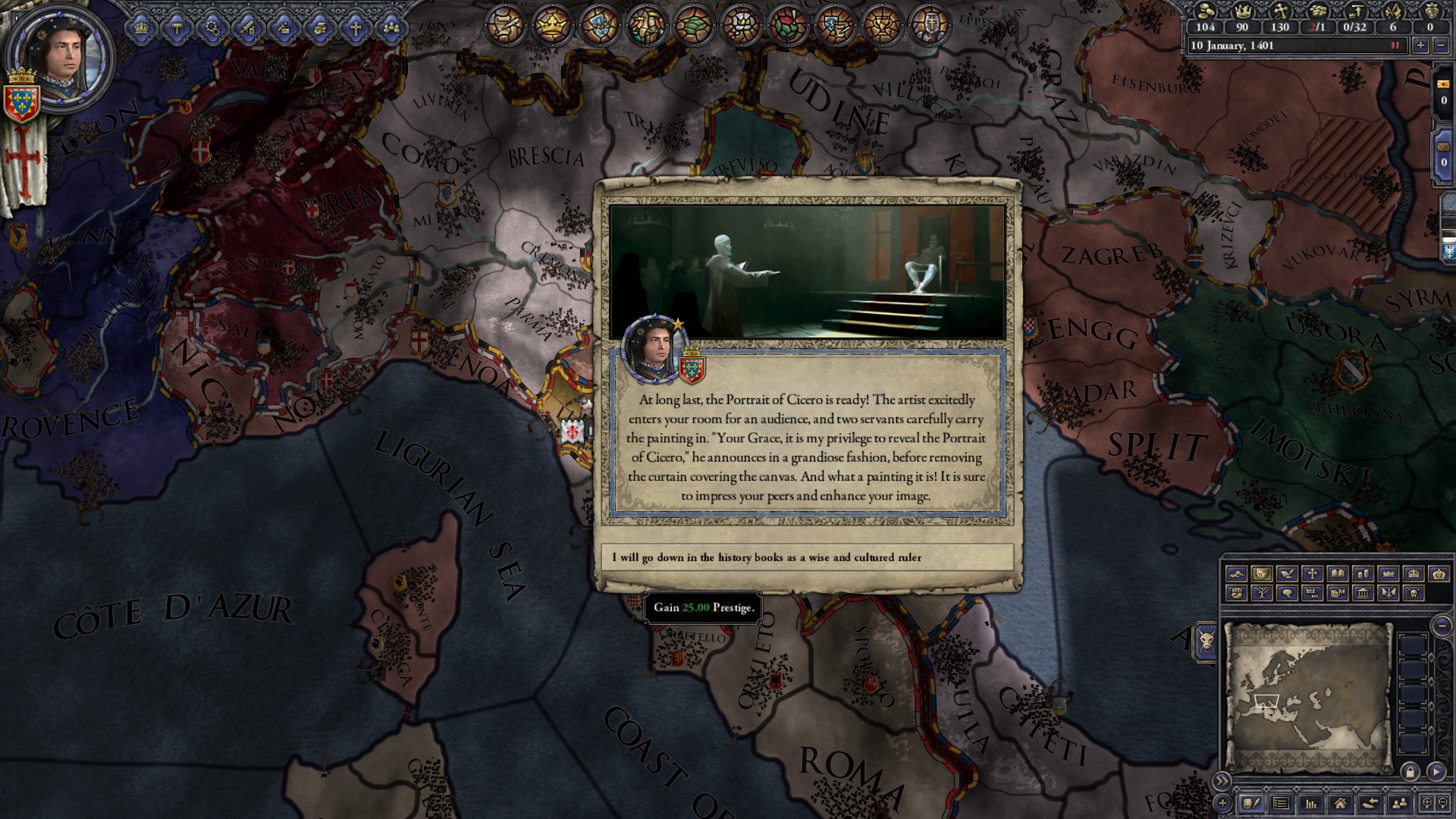 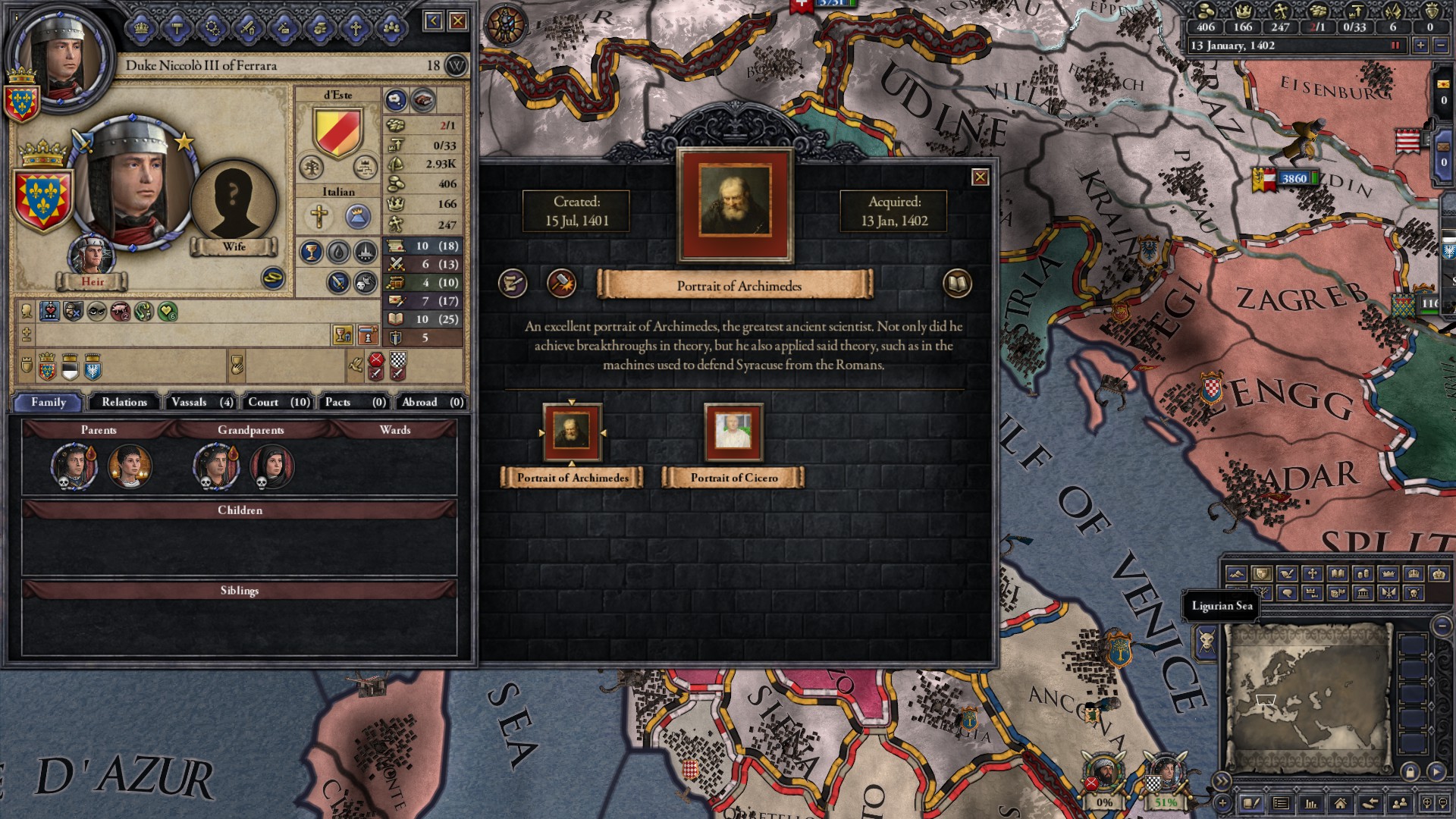 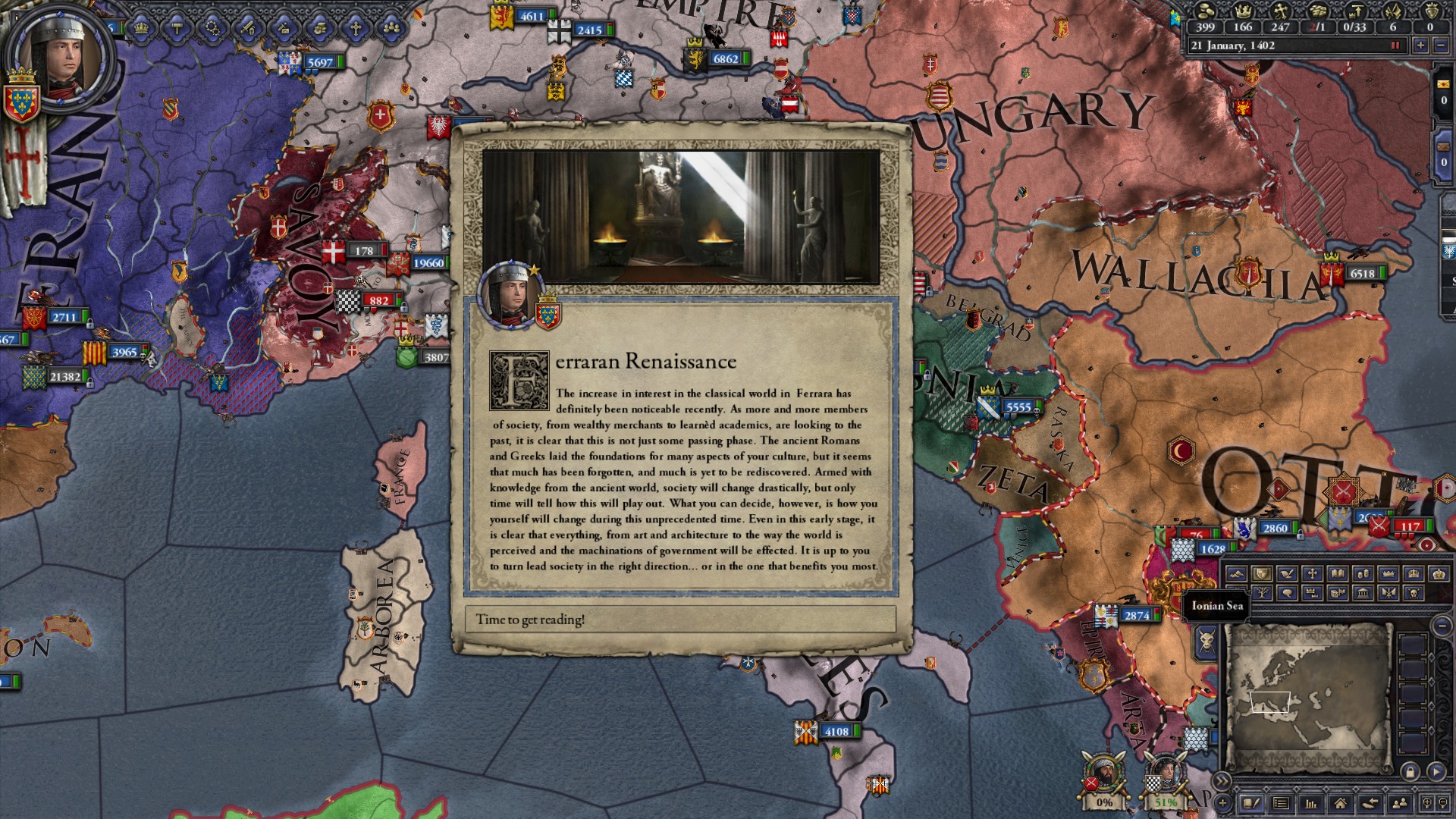 Over the coming weeks, we will continue to fill out the map, as well as adding more content for the Renaissance! I look forward to hearing some feedback for this initial release of the game! We also have a subreddit, for those of you who would prefer to discuss the mod there.

The mod is available on Nexus Mods and the Steam Workshop
Expand signature
Check out Beginning of the End: A 15th Century Mod for CK2. If you're interested in helping out with the modding, let me know!
Reactions:

Very nice but why tf is Slavonia part of the HRE?
Reactions:

ArVass said:
Very nice but why tf is Slavonia part of the HRE?
Click to expand...

The von Cilli dynasty owned that land- it is difficult to represent borders properly in CK2, and making that land part of the HRE isn't ideal or entirely accurate. They von CIli dynasty were kind of vassals of both the HRE and Hungary, so I had to choose one or the other. Since they were German, I went with the HRE, but I can definitely understand why it's weird!
Expand signature
Check out Beginning of the End: A 15th Century Mod for CK2. If you're interested in helping out with the modding, let me know!

Daniemperor said:
why is Charles the IV called Wenzel - His name as an emperor of the HRE was Charles
Click to expand...

He was baptised Wenzel, but changed his name to Charles on confirmation. I included a history entry for this, but it may have been overwritten.

Fascism is poison, and must be cut out.
Reactions:

a leader in the field of shallow thought

neutrondecay said:
He was baptised Wenzel, but changed his name to Charles on confirmation. I included a history entry for this, but it may have been overwritten.

No, he was named Charles by Charles IV of France (his uncle) whilst a ward at the French court.
Expand signature
Woke Chieftain of the Universe and lying dog-faced pony soldier.

In terms of their willingness to make friends, Germans can be compared to a coconut.