Menu
Install the app
You are using an out of date browser. It may not display this or other websites correctly.
You should upgrade or use an alternative browser.
Crusader Kings II 69383 Bug Reports 19630 User Modifications 10434 Suggestions 5831 Tech Support 6300 After Action Reports
Threadmarks
Introduction post

This mod aims to flesh out some economical mechanics for the game and bringing some more medieval flavour and immersion for players.
This is achieved through various new gameplay mechanics combined with flavour stuff, more details below.

The 3 towers are respectively the symbols of power of the main actors in CK2 : the dungeon for nobles, the steeple for clergy, the belfry for burghers.
Since this mod deals about those holding types and those important actors of medieval age, i found this name a good name. The original name is in French since i didn't really intended to share it here at first.

Our page on the official CK2 wiki :

The mod is designed to work on both Vanilla map and SWMH map.
I'd recommend playing with my mod Arkopack Interface which permits to display more modifiers on provinces and holdings because L3T uses more of them than vanilla.
NOT COMPATIBLE WITH FULL H.I.P.

Want to join the team, contribute or beta test ? Just send me a private message^^


If you want to support my modding projects :

Last edited: Jun 13, 2020
Toggle signature
Facts and opinions are not the same thing.

Older changelogs can be found in the mod's files.

Last edited: Jul 26, 2020
Toggle signature
Facts and opinions are not the same thing.

Here are listed our DevDiaries [DD] and previews of the mod :

Last edited: Jun 14, 2020
Toggle signature
Facts and opinions are not the same thing.

The long shot idea is to be able to play a real ingame minigame through a dice party with other character. It however may be difficult to achieve with the engine limitations, but at least I have the barebone of it (the dice game is totally abstracted) and its gameplay impacts.


One needs to be two to be able to play, so who can I play with ?

To start a game, you are using the diplo-action menu by right-clicking on the character you want to play with. You can play with any adult vassal or anyone at your location, so if you are out of your court (councillor job, pilgrimage etc. ) you can still defy someone there.
You'll be able to bet something or play just for the pleasure of it.
Primary, you'd want to play with your friends and people who like you enough.

It is very popular and universal for both the era and area of the game. 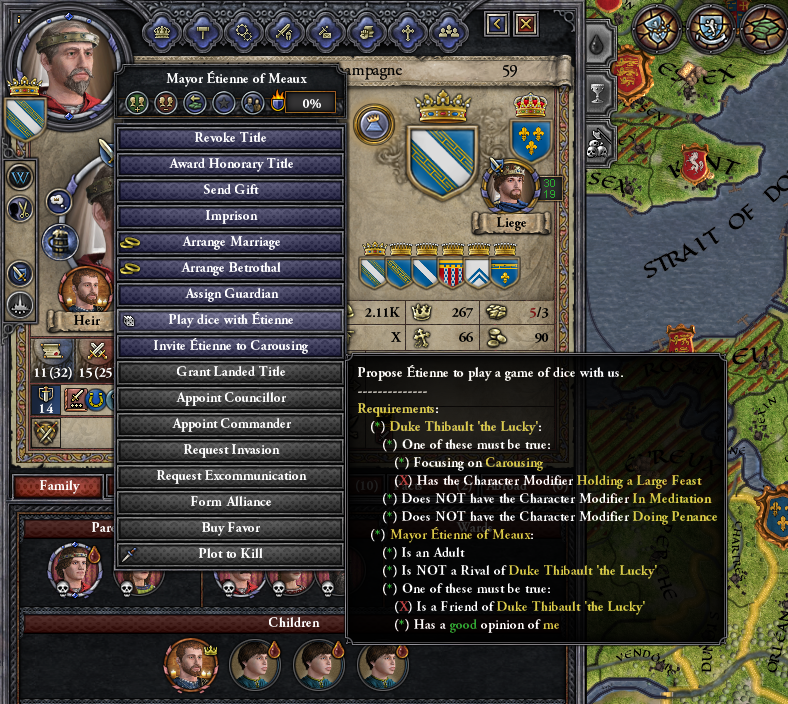 What does it bring to the game ?

You could end up with two new traits : Gamester and Fortune.
You can gain Gamester if you play much, too much maybe ! It is a lifestyle trait.
Fortune reflects you propensy of being more lucky than usual.
Before saying more about the trait itself, I have to mention that "luck" is now a new (hidden) value every character gains at game launch or at birth. Playing (and winning) at dice may increase that luck value, it is how you can finally gain that Fortune trait.
Luck by itself will influence various events from the mod of course. It is not implemented yet, so let me know if there are specific events you'd want to see luck playing a role in !
The fortune trait in itself have a lesser impact on the character than the gamester one. However, it will bring a changing bonus in the form of a modifier that bring +1 to one skill. That character modifier changes once a year, randomly.

Right below you can see the icons and effects of the two traits and one example of the luck modifier. 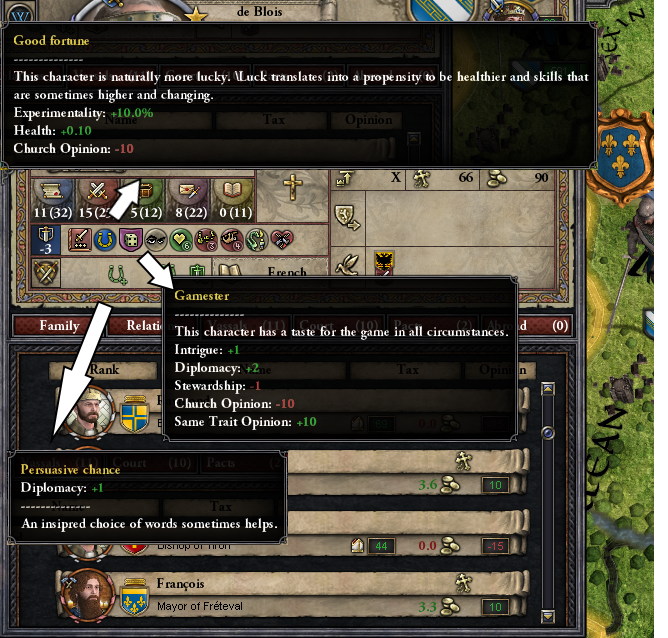 You can expect a new release late december I guess.

That's it for today!
Toggle signature
Facts and opinions are not the same thing.