Jump to latest Follow Reply
Menu
Install the app
You are using an out of date browser. It may not display this or other websites correctly.
You should upgrade or use an alternative browser.
Imperator: Rome 8779 Bug Reports 3624 Suggestions 2366 User Mods 615 Tech Support 488 Multiplayer 55 After Action Report (AAR)
Threadmarks
Reader mode

Announcing the Imperator Invictus mod - A community made DLC for Imperator: Rome

Welcome
Mod's out! https://steamcommunity.com/sharedfiles/filedetails/?id=2532715348
Or for PDX store:

mods.paradoxplaza.com
If you want to read the DD's, use the Threadmarks forum function as seen in the screenshot at the top of the forum post: 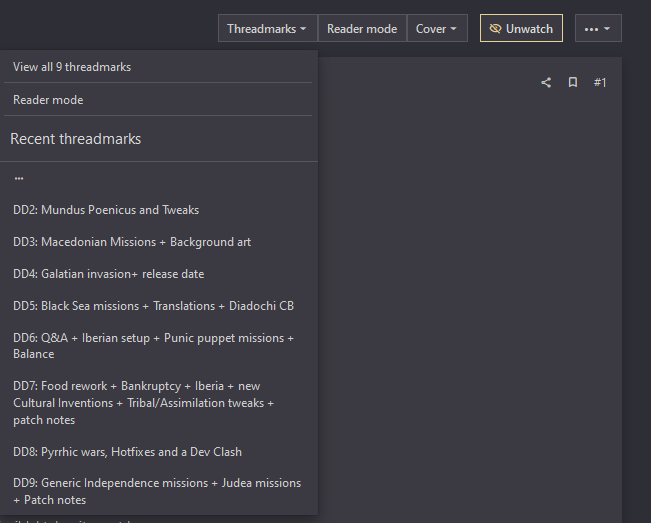 Invictus is Latin for unconquered, undefeated; our English word 'invincible' takes its root here.
Given the unfortunate news recently concerning the game status, we thought it best to combat an attitude of defeat with a fighting spirit.
This mod is our effort to prevent this great game from going gently into that dark night. Thus we are embarking upon a grand effort by the modding community (based around the Imperator mod COOP) to develop a community DLC and keep the game alive, while we wait patiently for future updates.

Within the lifespan of the current game, there have been various attempts to develop features for the game by the modding community, but these efforts have not yet been consolidated into a single grand work. By creating one grand modpack, we can ensure all smaller flavour mods we integrate are compatible with one another and thus players can enjoy the full experience developed by all the I:R modders. This modpack will merge many existing flavour mods, greatly expanding vanilla content while also adding content developed by us, without being a total rework.
It is not our intent to completely overhaul the game mechanics, we want people to be able to play the mod and understand everything while having only played Vanilla.

With respect to existing content, the following mods have been integrated into Invictus:

We want to thank the developers of these mods for their contributions and their generosity in granting us their work in the prospect of improving the game experience for everyone.
In terms of new features for Invictus, you’ll have to follow along for future updates as we get closer to release.
Feel free to join our discord and take part in the on-going discussion about what you think belongs in a mod like this: https://discord.gg/eaPhRbSq73.
We'll also be posting teasers on twitter: https://twitter.com/InvictusMod

In terms of suggestions, our goal is that anyone familiar with only vanilla Imperator should be able to pick up the mod and play without trouble, all features must be either historical or reasonably plausible and fun.
As this is a community project, we will listen to and work in the interest of the Imperator: Rome community and we look forward to hearing from you!


Although anyone wishing to contribute as a modder is welcome to aid us in this endeavor, just let us know.
Cheers to raising the civilization cap and increasing the population growth of this game.

Let the Hype begin!
Toggle signature
I play Paradox games on youtube, check me out here if you like: Lord Lambert​
Reactions:

If the spanish improved translation could be introduced this would be the best mod for me.

Looking forward to It! This is so cool, thank you guys!

And OFC expect a LP when this launches
Toggle signature
#ReviveImperatorRome #pls
Reactions:

Can't wait to see what you guys are cooking.

PDX: We're halting development on Imperator, we might not come back. Only time will tell
Modders:

Here it comes! And, of course, it had to be announced on a Monday
Toggle signature
Why do you sound surprised? I love America. Just because I think gay dudes should be allowed to adopt kids and we should all have hybrid cars doesn't mean I don't love America - Liz Lemon
MPs finalizadas EU4: Etiopía, Ayutthaya, Portugal, Rusia, Francia, Suecia, Papado, Mameluco.
USA in Ageod's Civil War II: Feel the hard hand of wAAR!
Austria-Hungría en la I Guerra Mundial (MP Cooperativa To End All Wars)
Reactions:

First and very important Q: Is there gonna be development diaries on Mondays?
Click to expand...

This is certainly something we want to do, perhaps not every monday but still, by next monday you should expect a DD.
Reactions:

Traxium318 said:
If the spanish improved translation could be introduced this would be the best mod for me.

Looking forward to It! This is so cool, thank you guys!

And OFC expect a LP when this launches
Click to expand...

It would also be important to translate this mod. It would be useless to add that improved translation if the rest of the additions are in English.
Reactions:

First and very important Q: Is there gonna be development diaries on Mondays?
Click to expand...

Oh this is really exciting. I did not know that this was in the works! I'll keep an eye on this.

What kind of content are you looking for, exactly? I've got plenty stuff lying around which could be useful; my Punic deity icons, some treasure icons, some faction icons, some flavour events and of course my work on Carthage.

Also; are you considering including other mods? Such as the road pass fix, Allis Ubbo, and Harvest Seasons?
Reactions:

This is awesome! I’m still having a blast on vanilla, but I will 100% be downloading this in the future.

Do you have plans to work on making the economy less static?
Reactions:
N

For me if implemented a factory to produce different types of Luxury items with a more dynamic trade like on Stellaris would be good.

And of course a option to embargo a nation.

LordKoal said:
It would also be important to translate this mod. It would be useless to add that improved translation if the rest of the additions are in English.
Click to expand...

Thanks you so much!