Menu
Install the app
You are using an out of date browser. It may not display this or other websites correctly.
You should upgrade or use an alternative browser.
Crusader Kings II 69347 Bug Reports 19624 User Modifications 10426 Suggestions 5830 Tech Support 6289 After Action Reports
H

CK2 Plus Factions Standalone
Version: 2.7.1
Credits: Wiz, Rylock, Zijistark and everyone on the CK2+ and HIP teams who has contributed, this mod uses the implementation of the faction system in the EMF module of HIP.

If you have ever played CK2Plus or HIP (Historical Immersion Project) then you will have encountered the 4 special interest factions, Court, Glory, Prosperity and Tradition, factions with no single goal like the vanilla factions but instead a general agenda as well as a overall faction mood. Your relations with each member, who each get a vote in faction actions, and how well your actions match up with the items on their agenda will influence how they interact with you, be it making ultimatums, passively observing your actions or giving you tribute and other rewards if they particularly like you.

As a fan of the system I found myself missing it in other total conversion mods and decided, with permission from Rylock and Zijistark, to adapt it as a standalone mod. 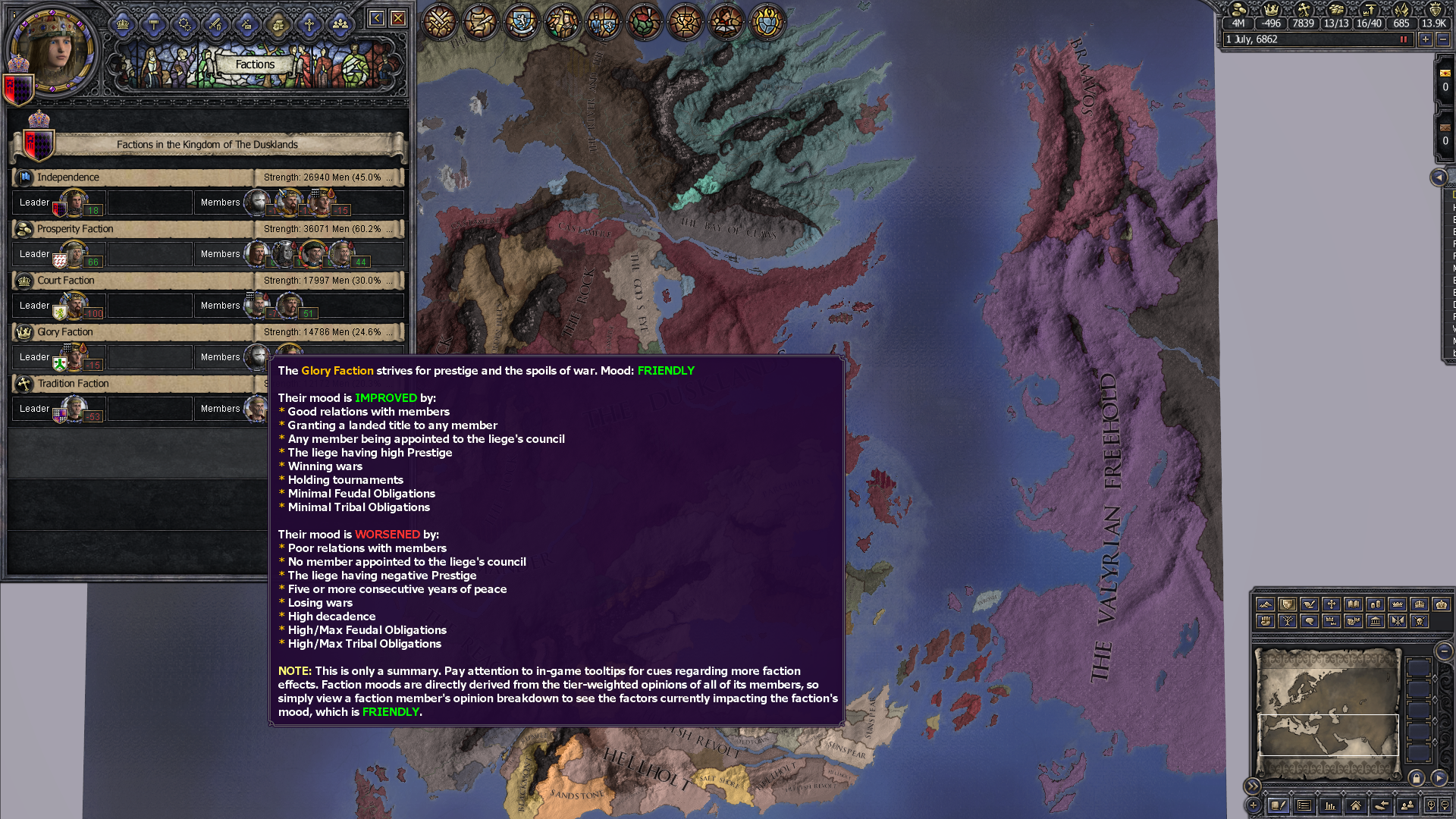 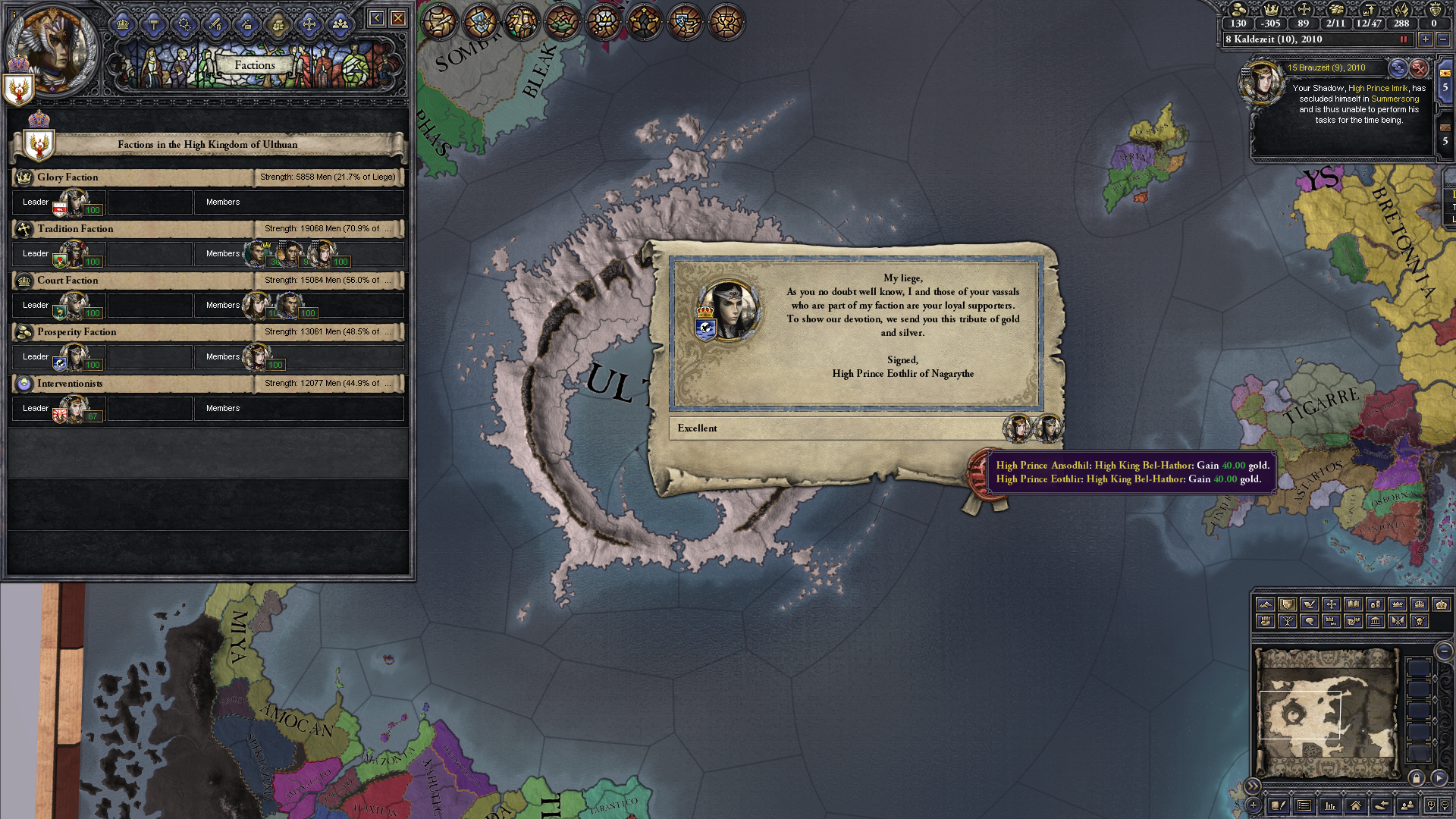 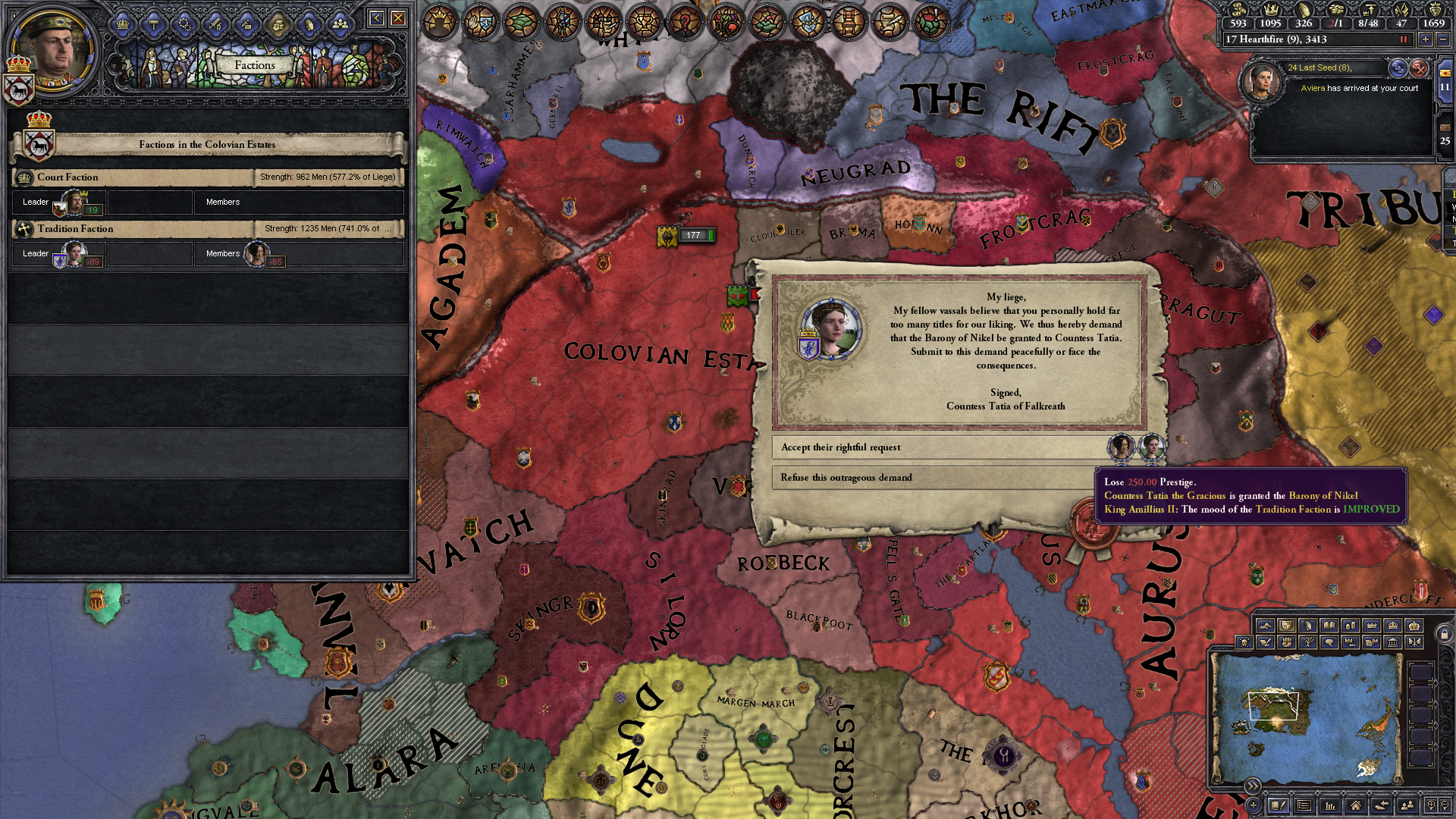 Nice
Toggle signature
"Those who would give up essential political liberty to purchase a little economic freedom deserve neither and will lose both."

"The point of crying 'fake news' is not, and has never been, to attack the point, or the argument. It is, always, an attack at confidence in information, and ultimately, confidence in reality. If anything can be fake news, then nothing is real, and The Strongman can rewrite reality at a whim." - Herbert West
S

That's great news!
CK2+ factions system is also something I have missed in many of the TC mods out there.
Thank you for your work, and thank you to all the creators of the system!

Thank you a lot! It's so much better than vanilla!

Enriador said:
Thank you a lot! It's so much better than vanilla!

Unfortunately doesn't seem to work with AGOT
Click to expand...

Strange, I didn't have much time to look this morning but It appeared the factions weren't showing up as a option to form, unless I forgot to enable my mod in my haste. This is what's happening to you when you try to use it, not crashes or anything? I'll have a look tonight and see what I can do.
Last edited: Aug 9, 2017
Toggle signature
Team Member on Warhammer: Geheimnisnacht
CK2Plus Factions Standalone Mod [Forum, Steam]
H

Enriador said:
Thank you a lot! It's so much better than vanilla!

Unfortunately doesn't seem to work with AGOT
Click to expand...