Jump to latest Follow Reply
Menu
Install the app
You are using an out of date browser. It may not display this or other websites correctly.
You should upgrade or use an alternative browser.
Stellaris 46043 Bug Reports 25924 Suggestions 15589 Tech Support 2518 Multiplayer 355 User Mods 4363 Stellaris AAR (After Action Reports) Console edition 1094
Show only dev responses

I was sick, so I made a custom portrait set for Stellaris, here you go: Space Egyptian Snakefolk. I imagine somebody will enjoy it.
The mod can be found on Steam on the link below, it contains the portrait set, a flag symbol, a custom Empire, a custom racial trait, and a custom starting solar system.

Animated Portrait set
Contains an entirely new, entirely animated set of Space Egyptian Snakefolks.
They blink and breathe and twitch, just like the vanilla species, they have alternative skin colors, alternative hairstyles, different clothing, and sexual dimorphism.
You can easily use this portrait set to create new Custom Empires, just like you do for the vanilla sets, but mind you, if you do that, you won't be able to use the racial trait that has been assigned to them in my original custom Emipre.

Custom trait
Just like in my other portrait mods, I've added a new racial trait to better represent the new species, rather than having to mix and match with the vanilla ones.
The trait will only be used by the custom Empire and cannot be selected, either by the player or by the AI for other random species. It provides several small buffs and debuffs, making the serpentoids a lazy but brilliant kind of species.

Custom namelist
The Serpentoid name list retains some reptilian features (ships, worlds, etc.) and only affects character names, adding a bunch of real life Ancient Egyptian names, both for males and females.
The list can, of course, freely used for any other species you wish to create.

Custom Starting Solar System
The Kheshem system can be a slightly rough start, as your capital planet, while very big, is overflown with decaying infrastructure. To make things worse, there are several primitive neighbors in your own system, which may be a lot tougher and closer to FTL technology than you might think...

Custom Empire
The Ancient Technosethi: a Divine Mandate, collectivist/fanatic spiritualist Empire with attached background, using all of the mod's features (flag, namelist, portraits, trait, etc.), ready for use.
It is set as forbidden for AI use by default, but you can easily change this setting in game by following the instructions below.

Enabling for the AI:
I'm adding this, since people are asking about it, both here and in the Steam page.

If you want to have the She'sesi be used by the AI as well, there's a very simple way to do that directly in game.

All hail! but what happened to fox and cats with dimorphism? Or are you just not linking them?

ShadowDragon868 said:
All hail! but what happened to fox and cats with dimorphism? Or are you just not linking them?
Click to expand...

What do you mean? They are still on Steam.


cybrxkhan said:
That's some great work you've done there, it almost feels like it could fit in with vanilla's portraits.
Click to expand...

Silfae said:
What do you mean? They are still on Steam.
Click to expand...

I think it's just that they're not linked in your signature.

(Are you ever going to make more of those? They add a lot of life to those portrait groups.)


Silfae said:
They have their own category; I imagine they'd fit more as humanoids, but, I prefer to add species in separated groups to avoid incompatibility with other mods, allow them to have their own buildings and insults/compliments, and prevent the mod from becoming outdated too quickly.
Click to expand...

Silfae said:
What do you mean? They are still on Steam.
Click to expand...

Yeah, but they aren't linked from your sig, which is why I was wondering.

Also, I have a question: Do you/do you have any interest in doing other graphical modding stuff, like UI elements (icons, etc,) or textures (planets)?

ShadowDragon868 said:
Yeah, but they aren't linked from your sig, which is why I was wondering.
Click to expand...

Mitchz95 said:
I think it's just that they're not linked in your signature.

(Are you ever going to make more of those? They add a lot of life to those portrait groups.)
Click to expand...

Ah, I see. No, I think it is more because they are not really "sets" as much as slight tweakings of the vanilla portraits, so I wouldn't really want to take credit for the parts of them which belong to the vanilla artist.


ShadowDragon868 said:
Ah. So they won't spawn as AI empire, then?
Click to expand...

No, I'd rather have these sorts of mods having the default being "non-intrusive". You can easily switch that setting by duplicating the Empire in game on the selection screen anyway.

As for making more of them, it depends on whether I'm inspired and have time to do so. A dimorphism pack doesn't take much time to do, but I'd also need to have an interesting variant in mind, I don't want to just paint the females of a different color, resize them slightly and put the mod on Steam, I'd like to provide meaningful differences.


ShadowDragon868 said:
Also, I have a question: Do you/do you have any interest in doing other graphical modding stuff, like UI elements (icons, etc,) or textures (planets)?
Click to expand...

I don't know, it depends on what the inspiration of the moment is, although I would say I am generally not interested in UI elements. I remember that there were a few times when I tried forcing myself to do some of those for the Geheimnisnacht mod, but, besides some trait icon, I always found the result incomplete and unsatisfying.
Toggle signature
Tolerance Laws - Now with interfaith marriages
Geheimnisnacht - Warhammer mod for CK 2 (drawing portraits, scripting events, coding mechanics, writing lore, checking characters etc. etc.)
Sweet Arabyan Nightmare - Warhammer mod AAR - Nominated WritAAR of the Week 31/05/2015, Nominated Weekly AAR Showcase 14/06/2015
Hypercoil: Origins of the Sheelikoi - Stellaris AAR
Stranded: An Asari Web Revolution - Mass Effect Stellaris AAR - Nominated WritAAR of the Week 05/07/2016
My CK2 Portrait Sets - Elves, Dwarves, Orcs, Goblins, Daemons, Vampires, Lizardmen, Beastmen, Treemen, Humans and more.
My Stellaris Portrait Sets - Eldar, Asari, Quarians, Serpentoids, Holofrixit, ALL OF THEM
My Custom Lore - Cathay & Jade Vampires, Araby & Mahtmasi Vampires.

Awh, drat. I'm trying to rope together a comprehensive planetary inhabitation overhaul mod, and the real bottleneck at present is art assets. I was trying to get hold of the guy behind More Planet Types to see if I could get him aboard as a collaborator to incorporate his mod, or at least secure permission to use his assets, but he hasn't responded. I was hoping if I could find an artist, we could just move forward without it.

Art assets are always the bottleneck for modders, I think.

It's okay. The stuff you do is incredible, and materially enhances Stellaris anyway.

-I've redrawn the flag symbol; now it's an Egyptian eye with a snake pupil.
-I've added some tailored planet modifiers for the worlds of the custom solar system.
-I've cleaned up some minor errors in the code.
-I've drawn actual custom buildings for the serpentoids, rather than have them use the Fallen Empire ones. 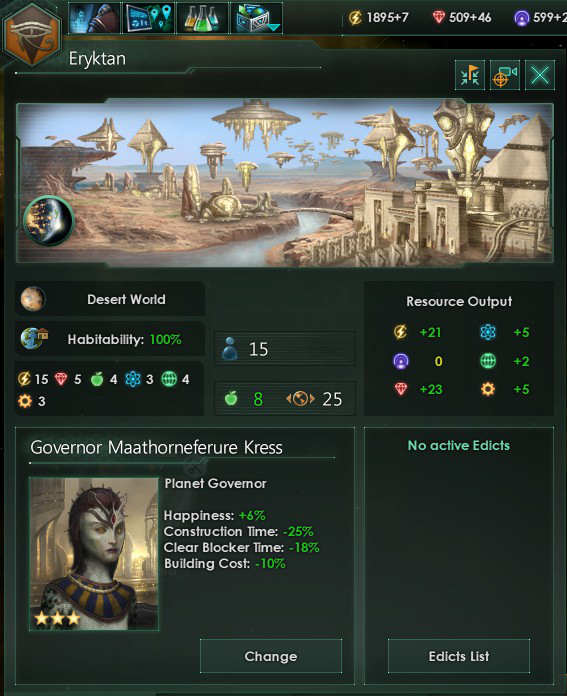 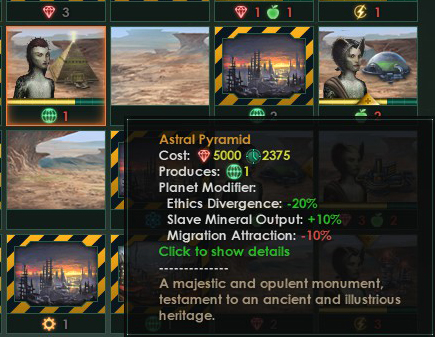 And your other mods too!

I hope to see more work from you!