That's the beta version of the mini mod I'm working on, probably there still will be some minor issues but the most is done, for now I'll wait HF and then the work on this will continue, but I still wanted to share that with the community.
Here some screens: (outdated, not compatible with versions of the game after patch 3.0 Holy Fury)
Last edited: Jun 17, 2019

Looking good buddy.
Keep it up!
Expand signature
Proud member of MEIOU & Taxes
It takes half your life before you discover life is a do-it-yourself project.
Napoleon Hill
All we have to decide is what to do with the time that is given us
J.R.R Tolkien
It is not these well-fed long-haired men that I fear, but the pale and the hungry-looking.
Julius Caesar​

Very attractive holding art, is that your work or are those base game or HIP assets I've never noticed?

daisha said:
Very attractive holding art, is that your work or are those base game or HIP assets I've never noticed?
Click to expand...

Yes it's all my work, the holding art is the primary and only feature of this mod, and my primary inspiration was the historical architecture of different areas of Europe (and in future maybe other places) in the XI and XII centuries, keeping a touch of the vanilla style for all of 'em.
In the screens you can't see all the things I changed, I've added respectively new art for:

- Byzantines, and it's the less realistic one, due to the fact that byzantine city housing for most of the middle ages was in wood and mostly indistinguishable from the later ottoman style, but I've took some inspiration from the classical greek mediterranean towns with white-painted houses (still widely diffused today, also in the hellenic influenced areas of Italy), with some "romaness" for maybe a "revival" of the empire (the byzantinophile lobby is powerful and I fear them).

- Italians, the one I personally like the most, because my inspiration come directly from a lot of medieval italian towns I visited, with the classical post-roman style of insulae mixed with a lot of houses close to each other due to the lack of space because they had to build only inside the roman walls, and towers and domes. (in the future maybe I'll add a different style for southern Italy)

- Caucasians, with the classical armenian/georgian style of churches with the pointed roof, I took some inspiration from paintings, pictures of archeological sites in Georgia and Armenia and from what I was able to learn about the architecture of those peoples at the gates of Europe.

- Occitan, I tried to use the more "occitan" style I found, because the architecture in Provence for example was way too similar to the italian one, some inspiration come obviously from the romanic of Occitania for the churces, from the town of Carcassonne and for the housing I used a typical half-timbered mediterranean style, the opus craticum of the romans who was still widely used.

- Iberians, for that I used a modified version of the occitan church (that I've also made) due to the strong influences of the occitan and lombard romanic architectural style in Hispania, for the castle I tried to represent a visigothic horseshoe arch but It's difficult to notice it, while the housing is a mix of the italian and the occitan ones.

- Slavic, now used for all the slavs apart for the russians, that's because the russian architecture of the time was mostly in wood in a style very similar to the norse one, only the temples/churches were different but maybe I'll change that later. By the way my inspiration come from hungarian and polish medieval architecture, from the church of St.Andrew in Krakow and the typical housing of that region, who was very similar to the northern european one but I tried to display a lower population concentration, so not so many houses.
Maybe one day a good thing can be to differentiate the south slavs from the western ones.

I was also thinking to create a different style for the celtic peoples of britain, but then I discovered that the architecture of the place was modeled on the English one, and too similar to that, and the english is too similar to the vanilla classic style for north-west-europeans, imho at least, if someone have some advice I'll be happy to change my mind.

If someone more learned on arabic or maghrebi architecture can give me some advice, maybe will be a good idea to differenciate a little bit the middle-eastern style, but for what I know the housing of that region was more or less symilar and well advanced by the time of Babylonia.

For every style I used a modified old painting of a landscape of that region, took from the internet.
And that's all.
Last edited: Oct 3, 2018

Will you upload this to the workshop? I want to keep track of the development and find stuff gets forgotten/lost on the forum!

whereiswald0 said:
Will you upload this to the workshop? I want to keep track of the development and find stuff gets forgotten/lost on the forum!
Click to expand...

Now that we are approaching to the release of Holy Fury, probably not.
I'll wait, also because the new dlc will add a lot of new graphical stuff and I hate working on something to have to re-done all the things just a little time later, so after HF for sure, it will be updated etc... but then I'll be also busy with a lot of huge other modding projects I have if for real HF is the last dlc (as I hope).

Cool, could you fix the frames for certain unbuilt holding slots? 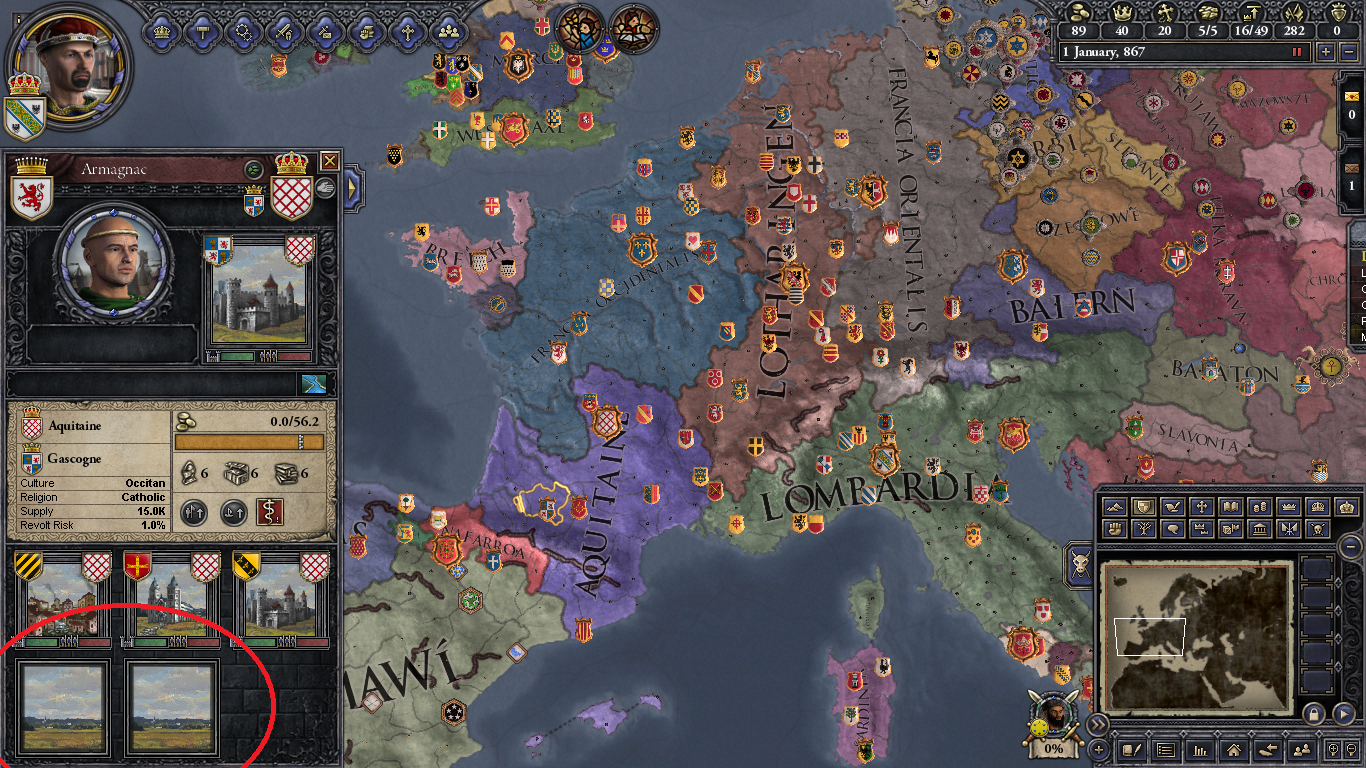 Also, overwriting files is dumb. Please structure your mods like this instead:

Also, instead of using the whole 00_cultures.txt file for very minuscule changes, simply make a new one (called e.g. "zz_interfaccia_cultures") and add your changes:

myrt said:
Also, overwriting files is dumb. Please structure your mods like this instead:
Click to expand...

I didn't know how the hip mod and various submods works, so I thought overwriting the files was the only logical way to avoid possible compatibility issues with ARKOpacks for example or other optional mods.
I'm not so skillful on compatibility issues because I didn't mod Ck2 for at least two years or more, and a lot is changed by that time, but if it work the same in that way it will be absolutely better, and thank you also.

.Me said:
That's the beta version of the mini mod I'm working on, probably there still will be some minor issues
Click to expand...

I will for sure!


Erilaz said:
And it seems you didn't change anything in z_CPR_cultures.txt so why include it?
Click to expand...

Now the mod is still in beta, I want to apport more modifications to it later so the file now is here even if (for now) untouched.

Some little changes and improvements, now the baltics and the finns didn't have anymore the westslavic.gfx, and I added a new temple for all the eastern european pagans thanks to the suggestions of @Herr Doctor , inspired by the balto-slavic kapishche.

While there is a new church in the byzantine influenced russian style for the russians.

And another church for orthodox southern slavs (Serbians and Bulgarians) also influenced by the orthodox style. Well it's actually a modified version of the church I used for the byzantines.

Ah, now the cities of the anglo-saxons will look more wooden, they use the norse style for that particular, influenced by the high middle ages saxon villages. While the English continue to use the western model. An example here: That's new, a castle in norman style, they were famous to use their very practical square and geometric shapes in their military architecture, echoing a bit the style of the late-roman fortifications doing this. Now the Norman castle is used for the Norman culture, the Sicilian and the English cultures. (if the Normans rule England and the melting-pot event happens, clearly)

And also a church for the sicilian.gfx. The architecture of the "meridione" of Italy was peculiar, culturally they were able to mix influences from the byzantine world, frankish west and post-roman italy, so I though they need something unique. I took some inspiration from the cathedral of Amalfi and the cathedral of Palermo. While they use norman castles and italian cities. (I'm thinking that maybe the greek cities are better for southern Italy, but I'm still not convinced because of the huge architectural variety in that region.)

Other changes: now the Alans use a mix between mongol cities, norse castles and russian churches, and I believe it's all.

Almos forgotten that I really wanted to add a little bonus for the pagan celts, and for the norse-gaelic culture.

I gladly accept new suggestions, otherwise my work here is done (Apart from some graphifc fixes and to stabilize the version for vanilla that will be now my priorities)
Or I'll start to work on different pagan mediterranean temples, as we are all looking forward to play as hellenes in the new DLC.
I'm also very interested in middle eastern paganism, maybe something Assyrian, I always found interesting that pagan mesopotanian practices endured untile the X century in sparce minorities in some unreachable areas of former Assyria, or in the city of Harran.
Last edited: Oct 9, 2018

From the frame styme used, It looks like it is designed to work with Arkopack Interface on.
Expand signature
Facts and opinions are not the same thing.

Arko said:
From the frame styme used, It looks like it is designed to work with Arkopack Interface on.
Click to expand...

Makes sense, I don't have Arkopack on my laptop.

I feel like the Islamic buildings are very boring. If you could make some more colorful and ornate Muslim buildings, especially for Iberia and Persia, that would be grand.

myrt said:
I feel like the Islamic buildings are very boring. If you could make some more colorful and ornate Muslim buildings, especially for Iberia and Persia, that would be grand.
Click to expand...

I agree with you, until now I failed to find something in particular where to take some inspiration.
But the muslim gfx really need to be re-done, just think that the style used now for the mosques is basically the ottoman style, that is, simplifying a lot, byzantine architecture + minarets. That's a huge problem, a lot of people mistake eastern influenced byzantine architecture for arabic architecture, it's not only because of the ottomans but also because of things like the dome of the rock in Jerusalem that was built by bizantine workers.
I accept every suggestion for new middle eastern buildings, even if probably will be better to work on that only after the release of HF.
That's something interesting about arabic architecture of the middle ages:

After some research I've something new:

New temple for Levantine/Mesopotamian Arabs and Assyrians, also available without the minaret.

And for Al-Andalus, that's used also for the maghreb.gfx but with a different landscape.
All of them are inspired from the architecture of those regions in the middle ages.
M

These are beautiful. But will I be able to use this without ARKO interface?

Mr Nobody said:
These are beautiful. But will I be able to use this without ARKO interface?
Click to expand...

The game will run perfectly but there still will be some gaphical issues as shown in some posts before.
(to be fixed)

Mate, I fall in love with your mod already Do you have some plans for the hungarians maybe? I can search some reference for you, if you want
Expand signature
My Mods
Immersie Religious Holdings (v1.5 Tibet Update) - CK2