Mini-AAR of a short game

So, inspired by discussions from this thread, I've decided to play a game with end date of 2325... it was a blast, although it didn't quite go as planned. Glavius Admiral difficulty. Here's a mini-AAR of the run.

One of the most memorable events for my Assembly of Clans Fire Tribes horses was finding the Nivlac. 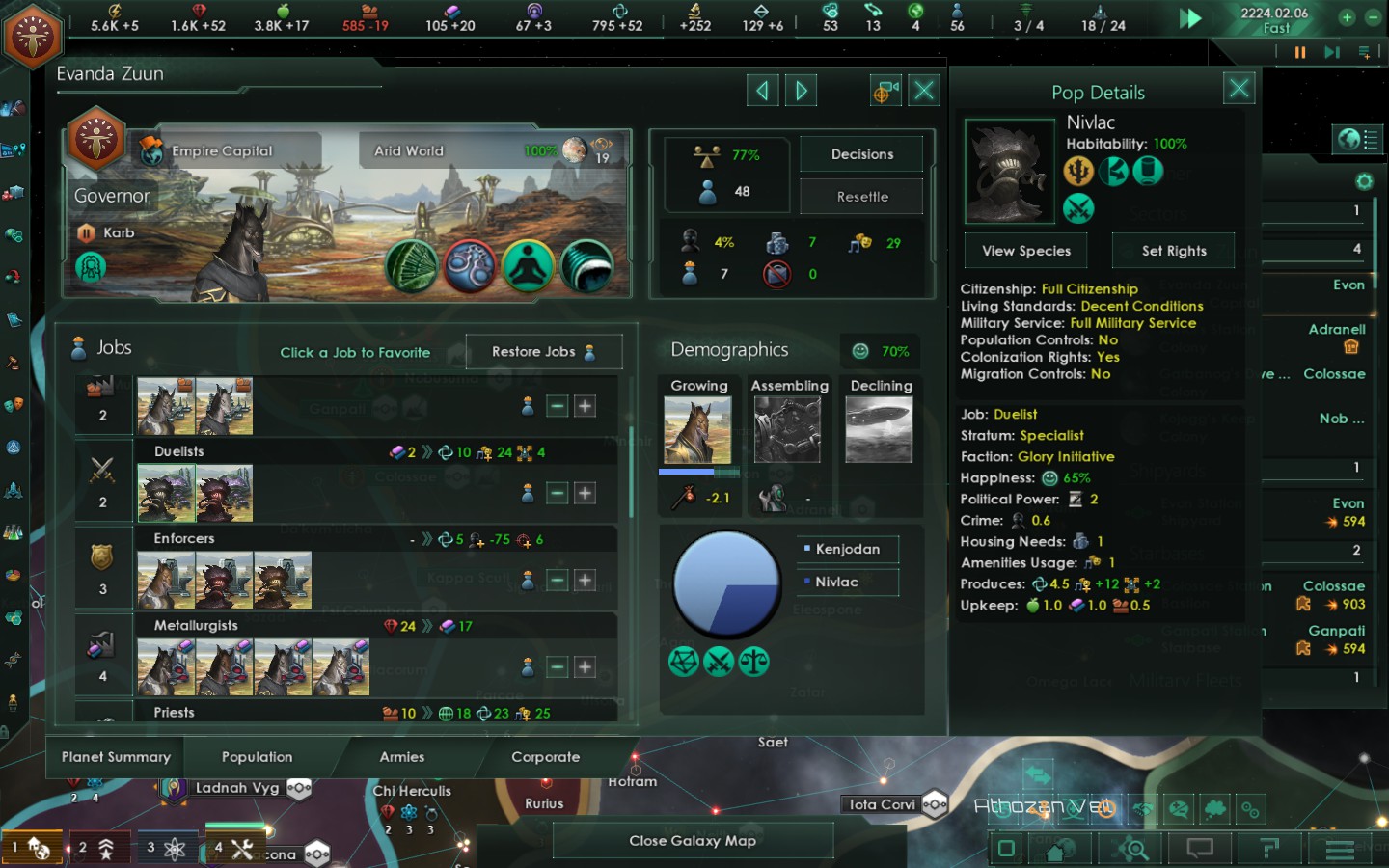 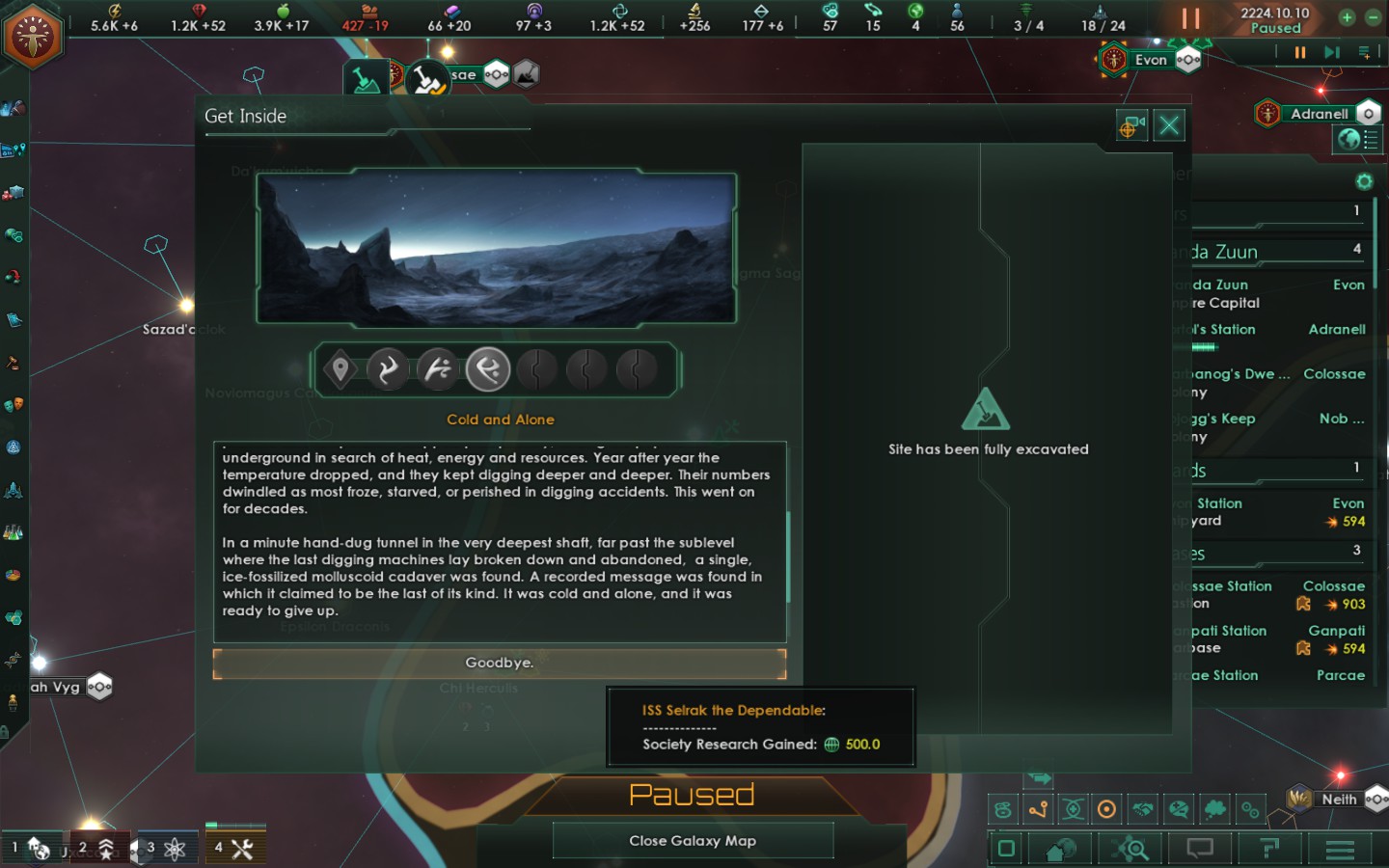 Subterranean Mect-Pux refugees became valuable members of our nation (I've managed to catch the Subterranean Civilization project before it is removed from the list by a bug). 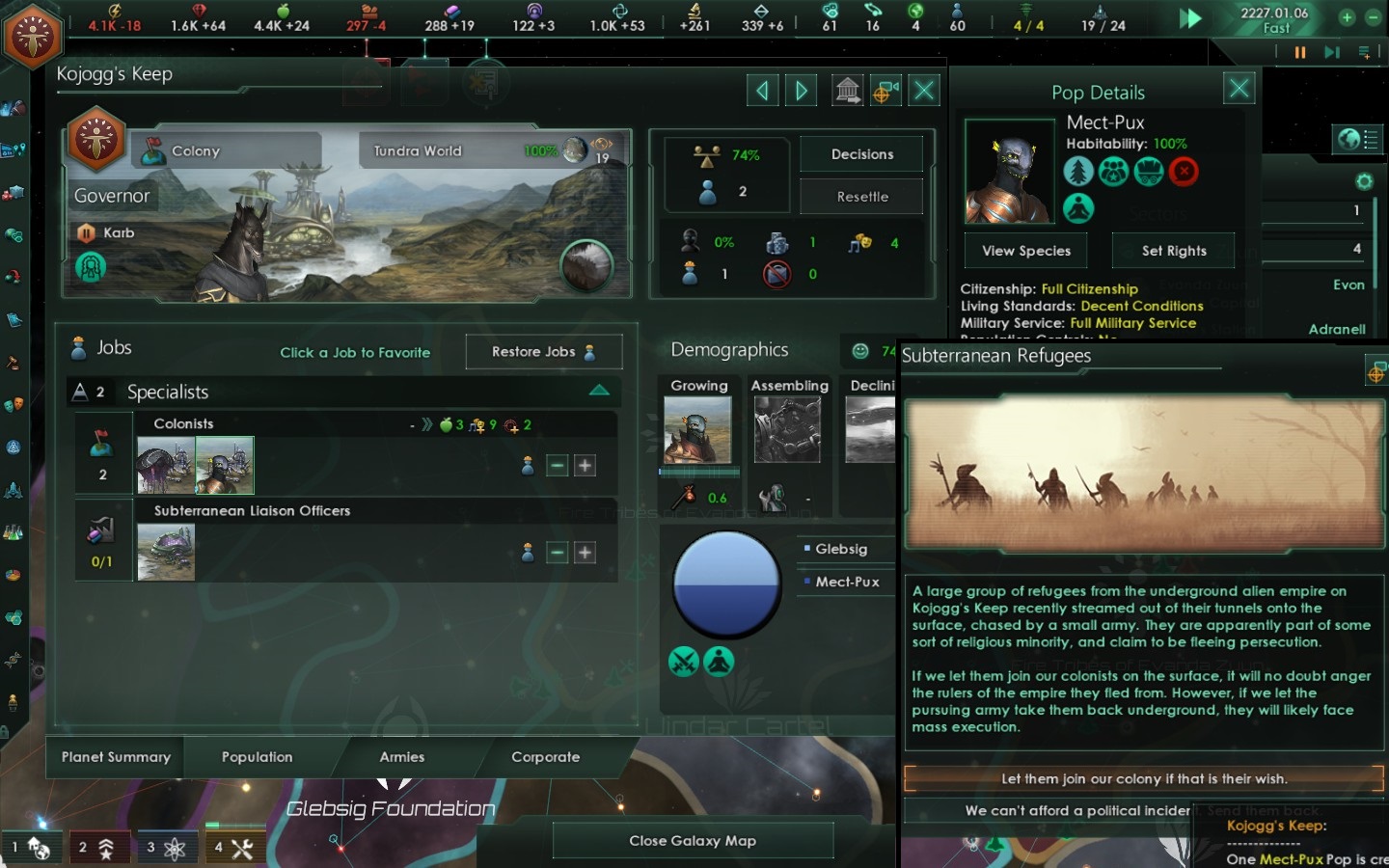 The friendly Glebsig Foundation nearby was eliminated by the one-eyed avian Cynur Decimators. 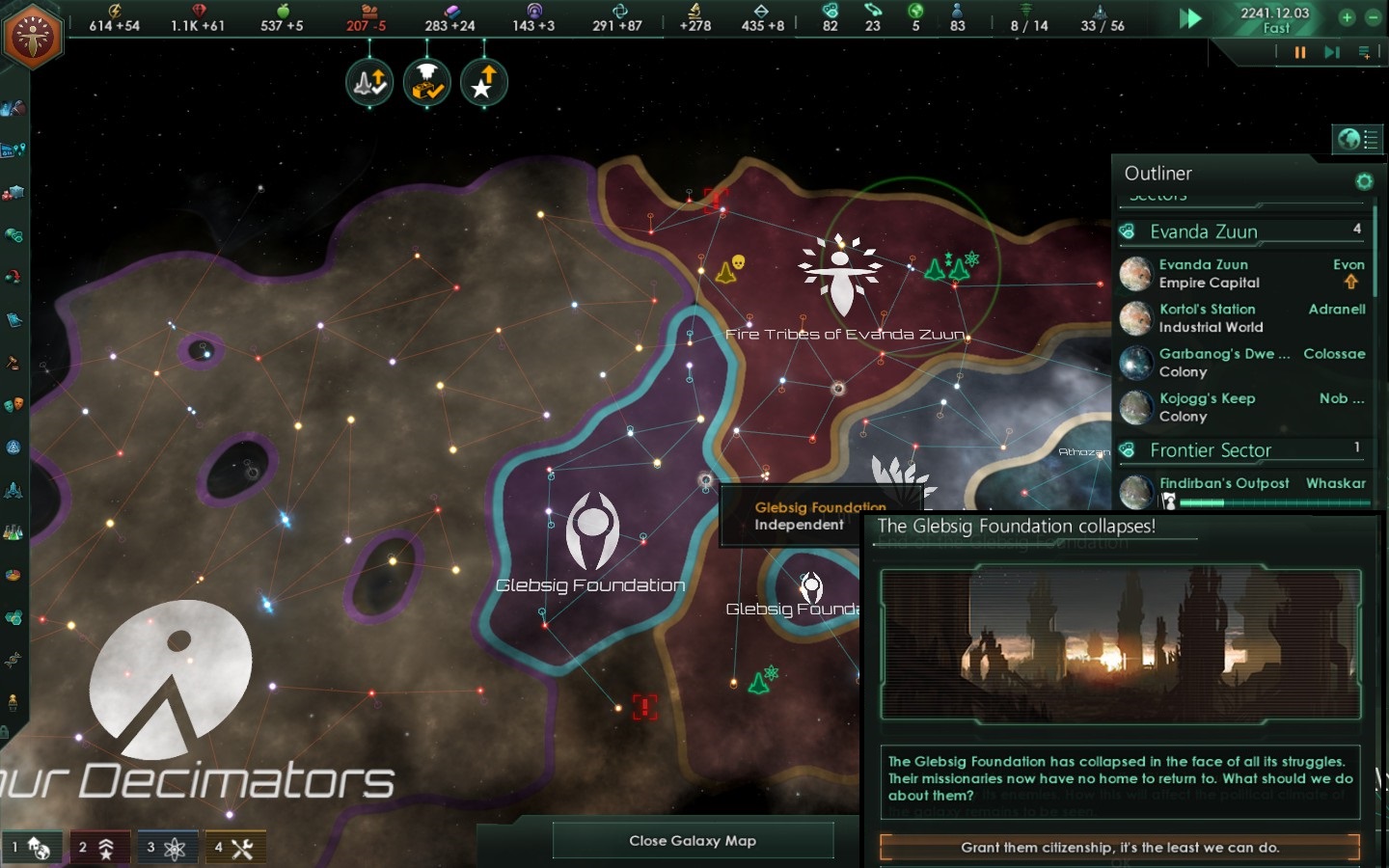 It was a matter of time before they came for us, too. Thankfully, we had Marauder mercenaries to help is repeal the initial onslaught. 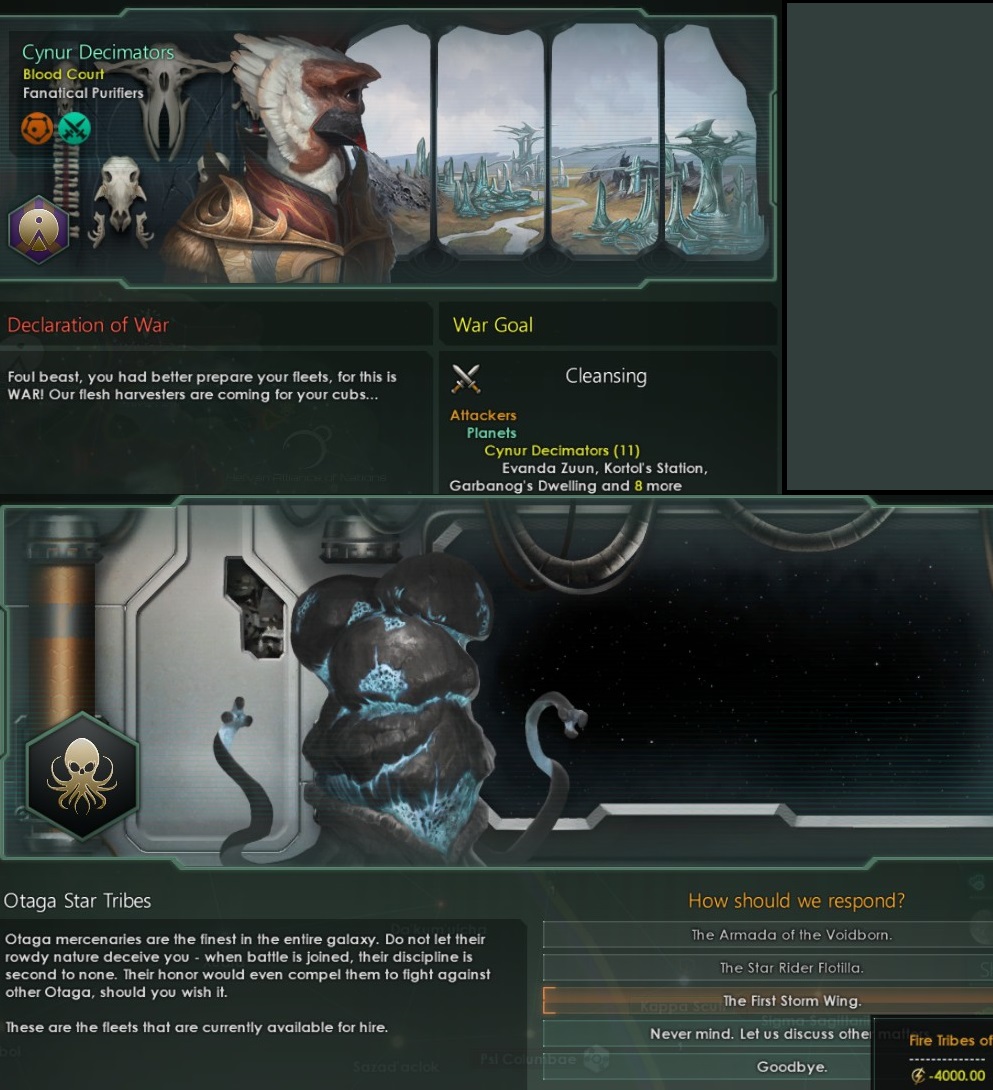 The Maradeur fleets constituted half of our forces. It was largely due to them we achieved vital victories over the Decimators. 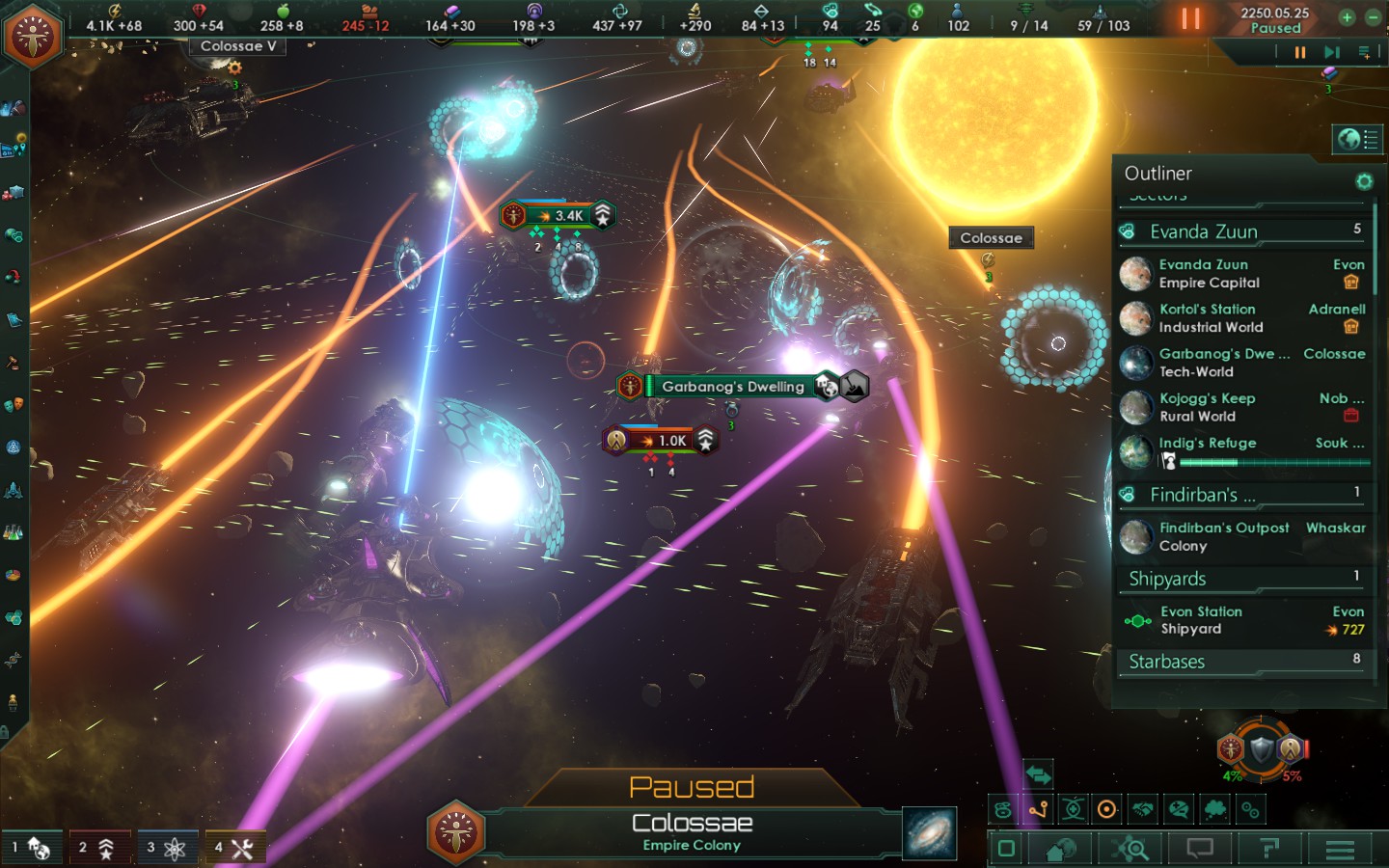 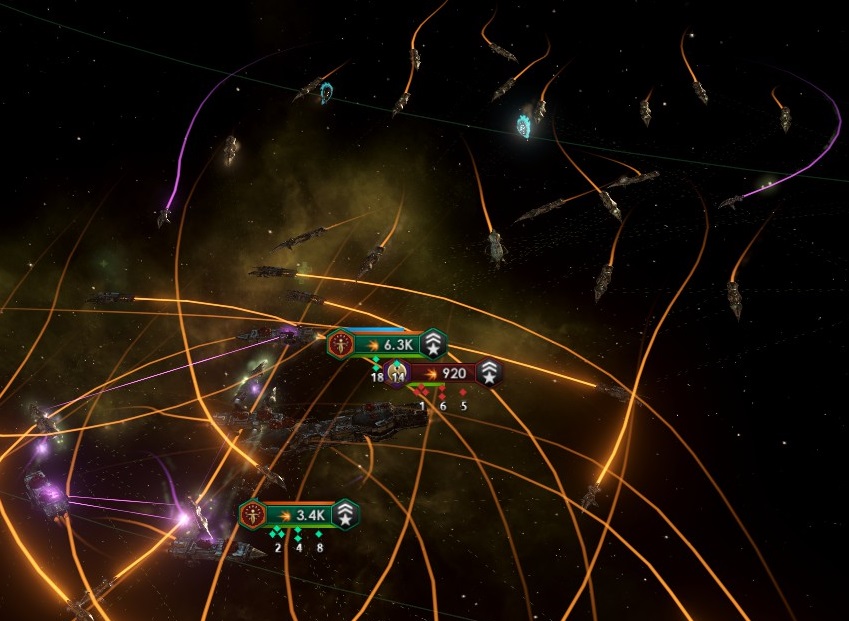 Soon afterwards, they left to serve their Khan. But Decimator fleets were already weakened. After a tense struggle, the war ended in roughly status quo, with the Fire Tribes managing to capture a couple of low-populated planets, but with the Decimators keeping control of some captured systems (I had to sign a peace treaty of mutual 100% war exhaustion after they rebuilt their fleets). 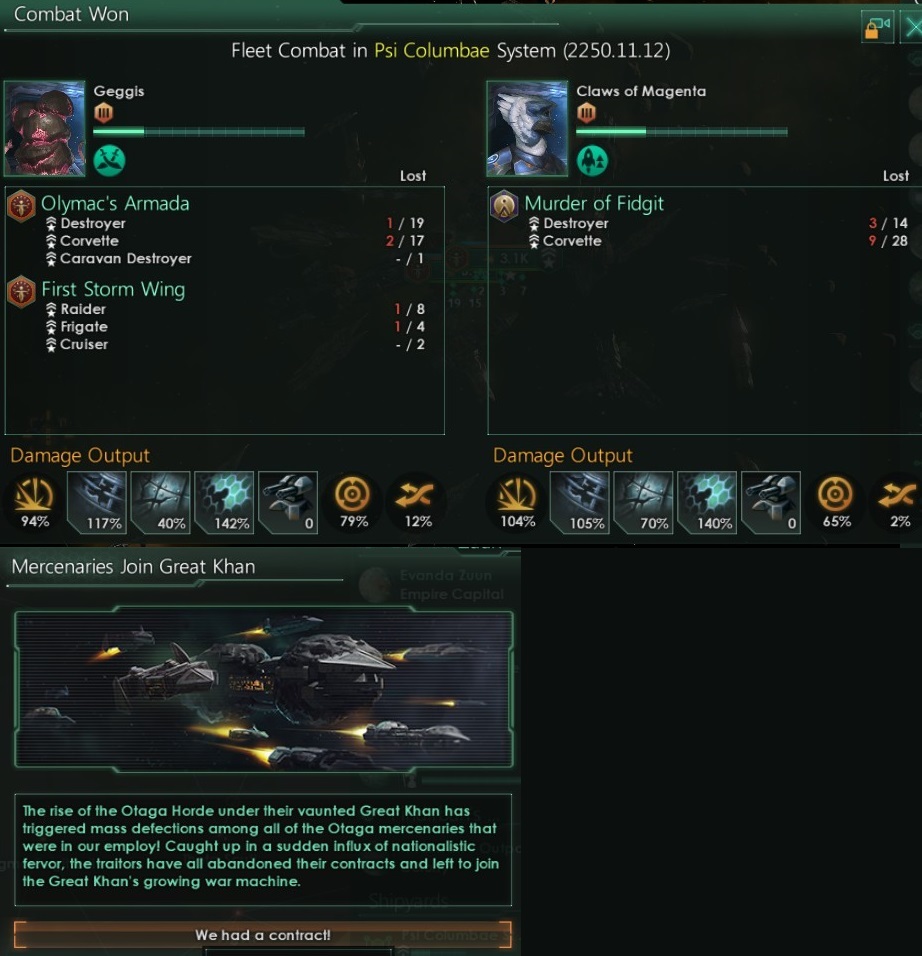 After a Center of Learning was founded on one of our planets, we rededicated it to Research Labs. 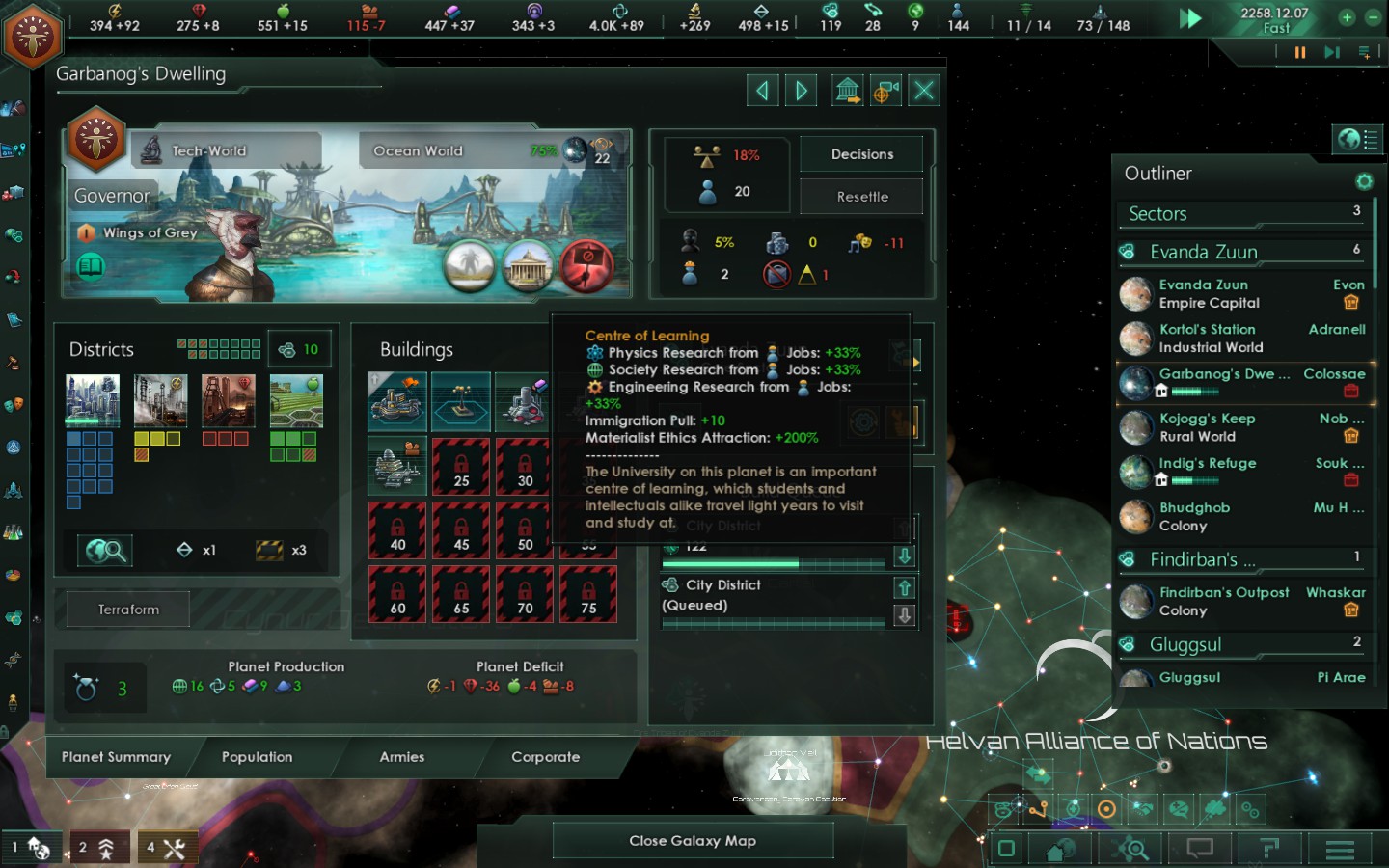 The Khan, before dying, has almost eliminated the genocidal machine empire, and marginalized another one. The Cynur Decimators' fleet was also damaged by their fights with the Khanate. It was time to strike. 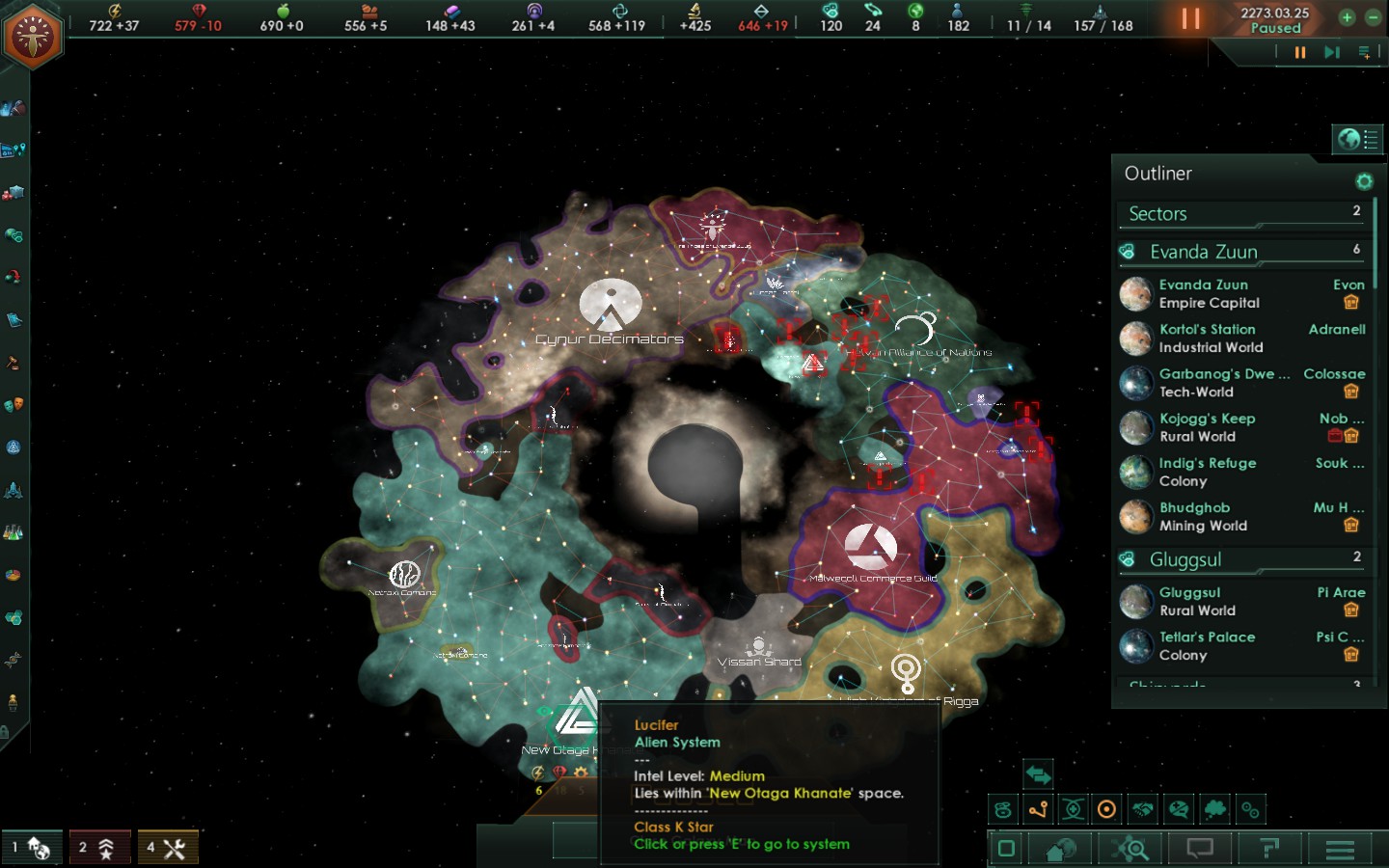 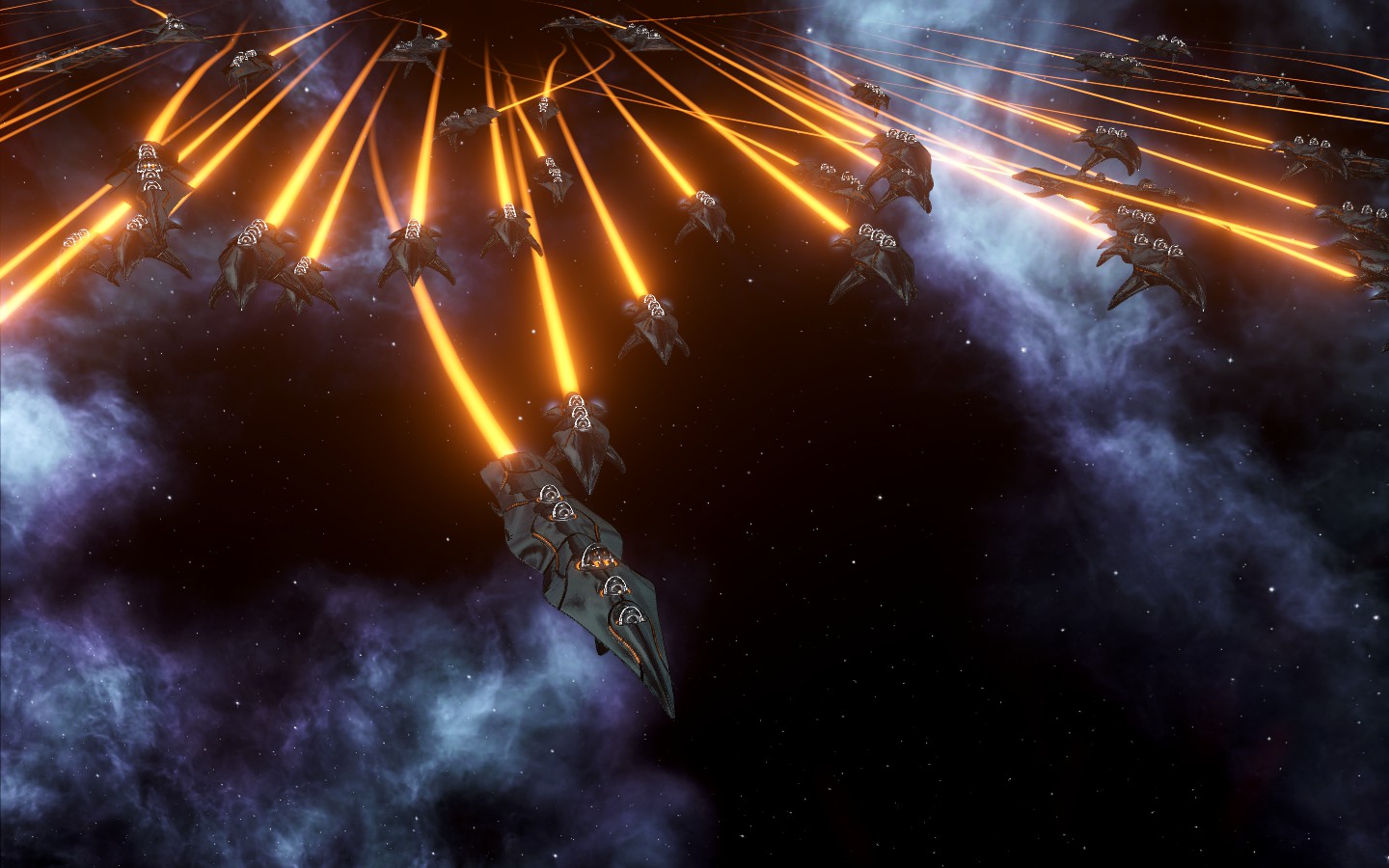 It was quite easy. The weakened Cynur fleet could offer only token resistance. 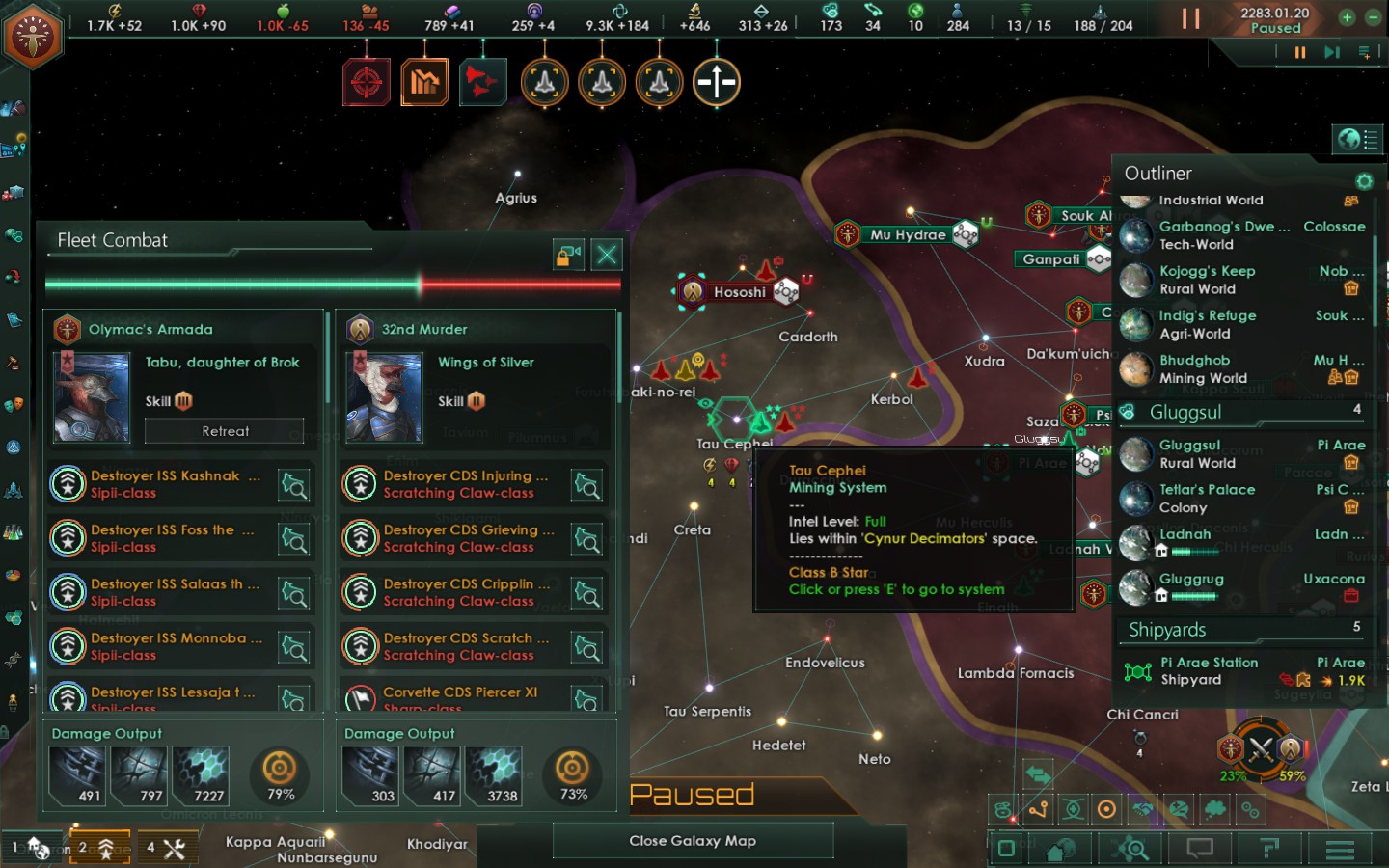 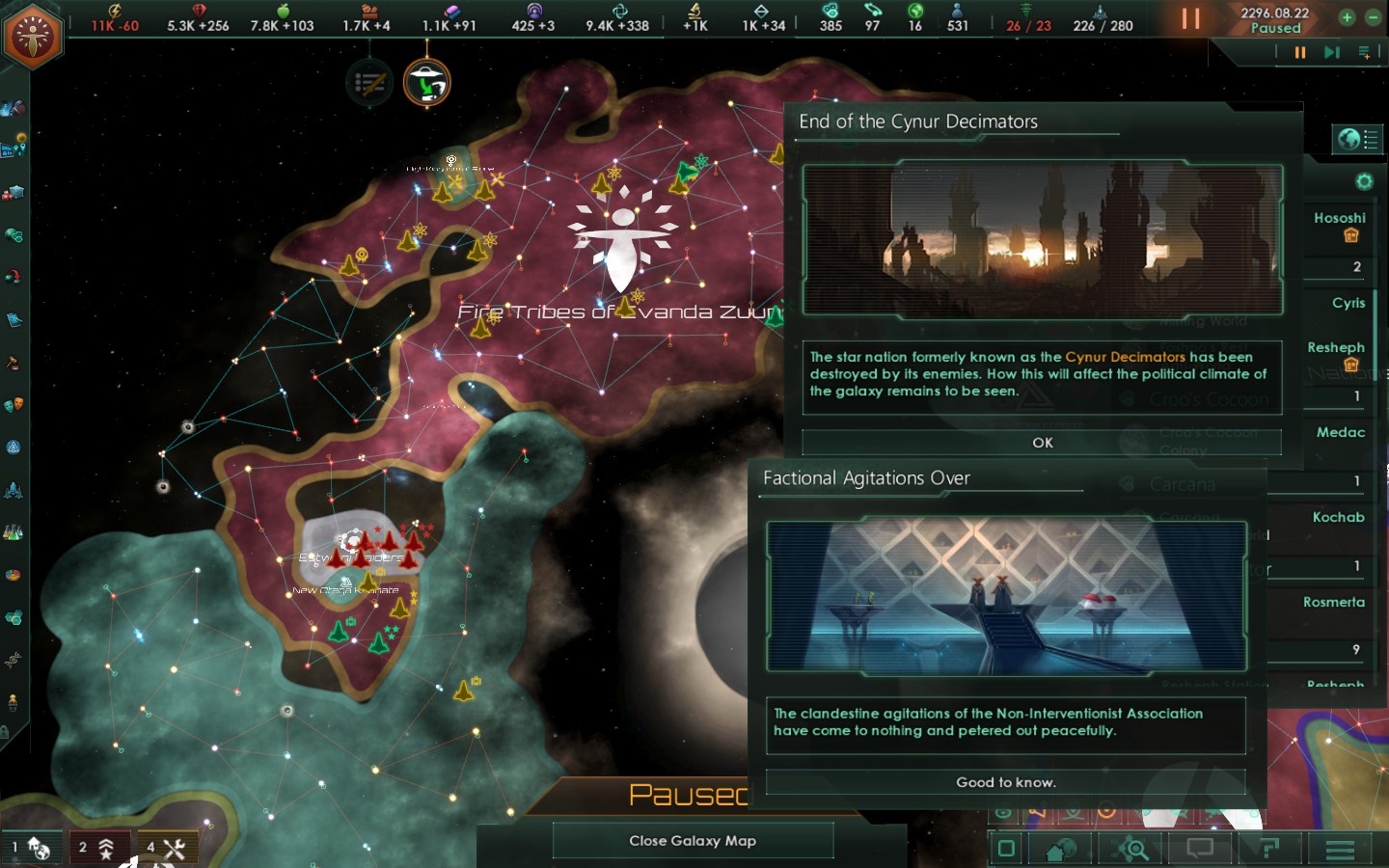 Only in 2309 I started to build Habitats. This Habitat was dedicated to Leisure (a lot of Holo-Theaters across my Warrior Culture nation were busy producing Duelist Unity and Naval Capacity). Most of my alloys, however, were dedicated to preparing for the Crisis. 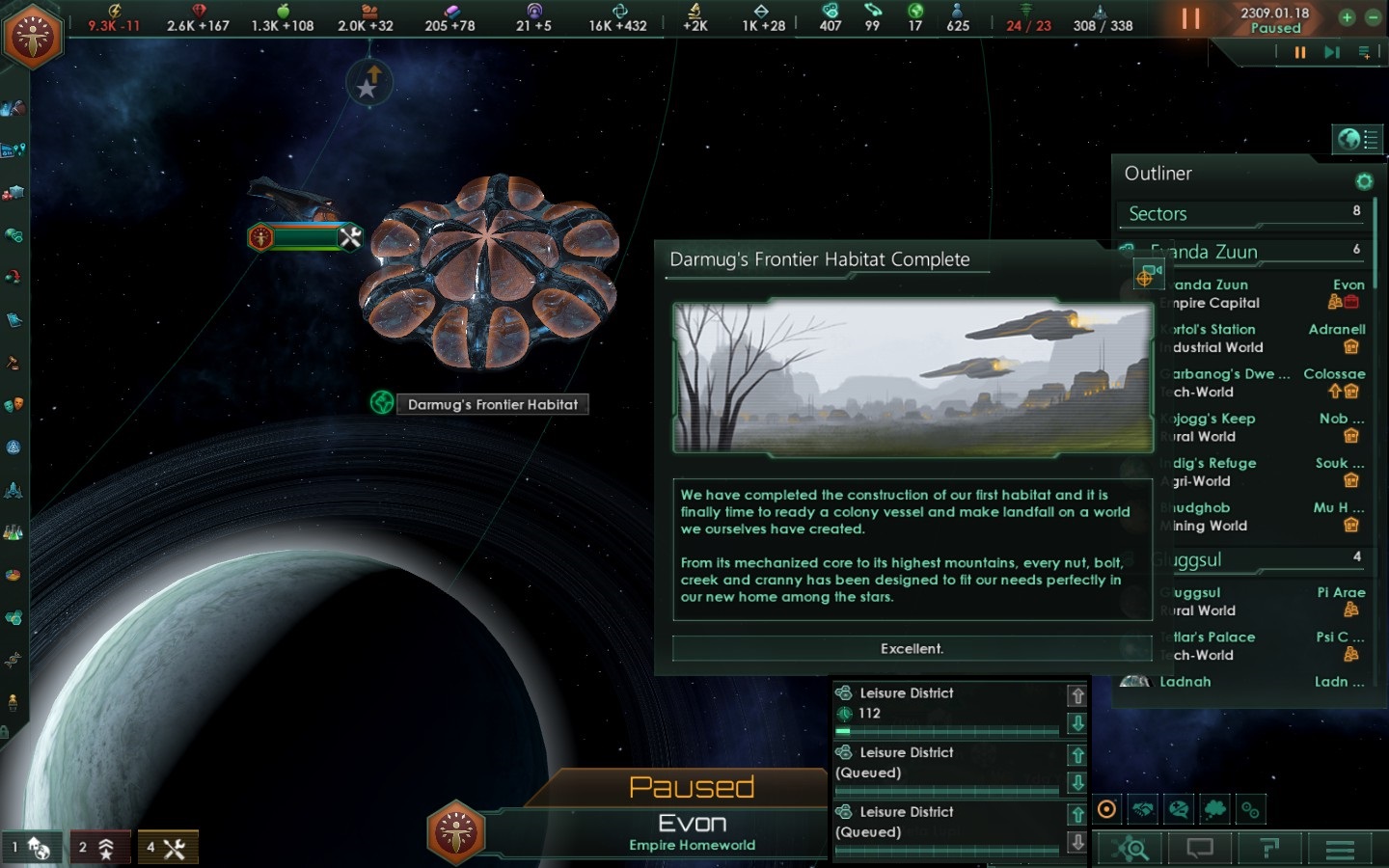 The Xeno Tolerance movement, led by a Nivlac Clan Speaker, was the most prominent faction in the Fire Tribes. 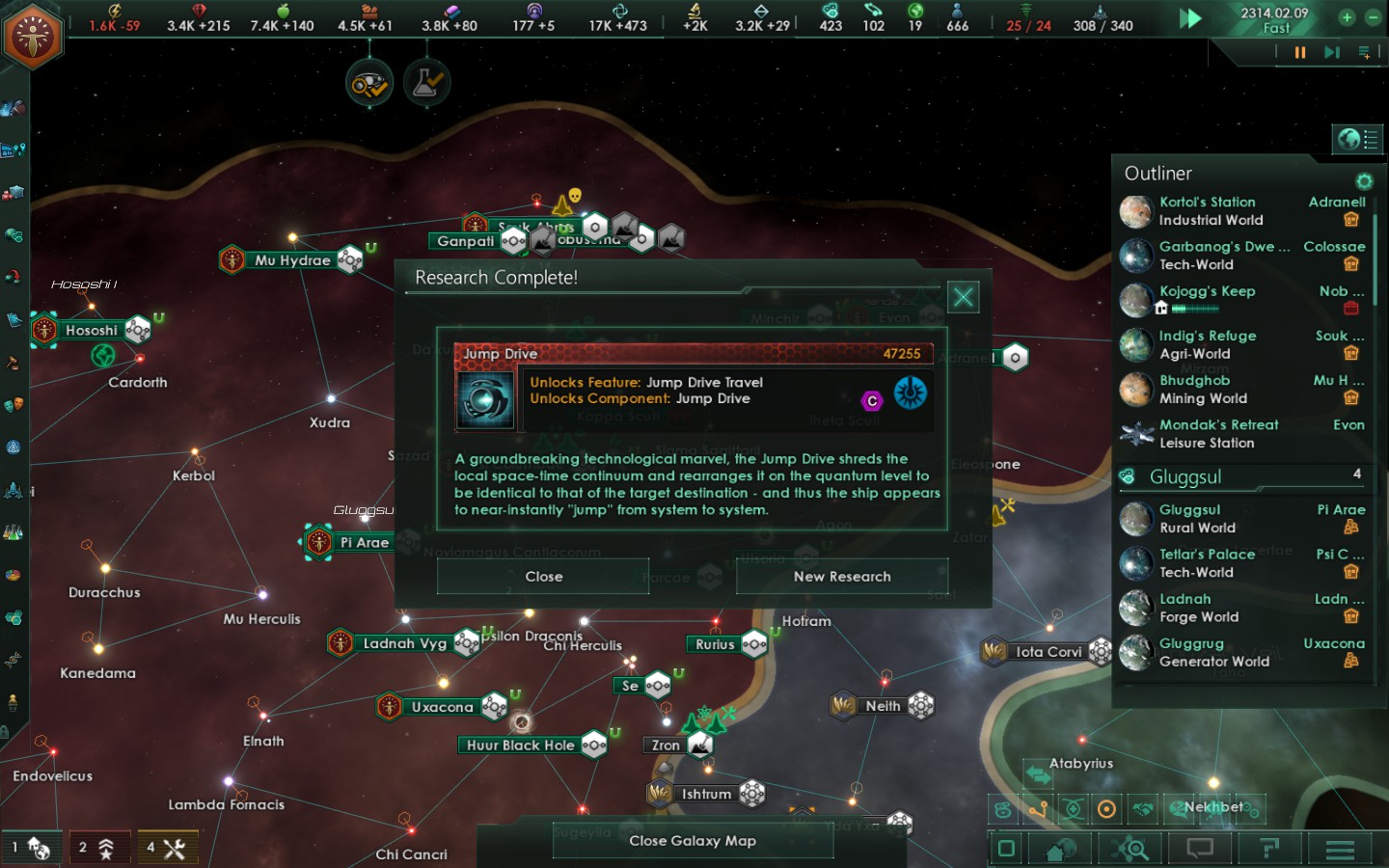 Unfortunately, this was not enough to trigger the Crisis. We lost to the Fallen Empire. I still had quite a lot of fun, with maybe 10 boring years. 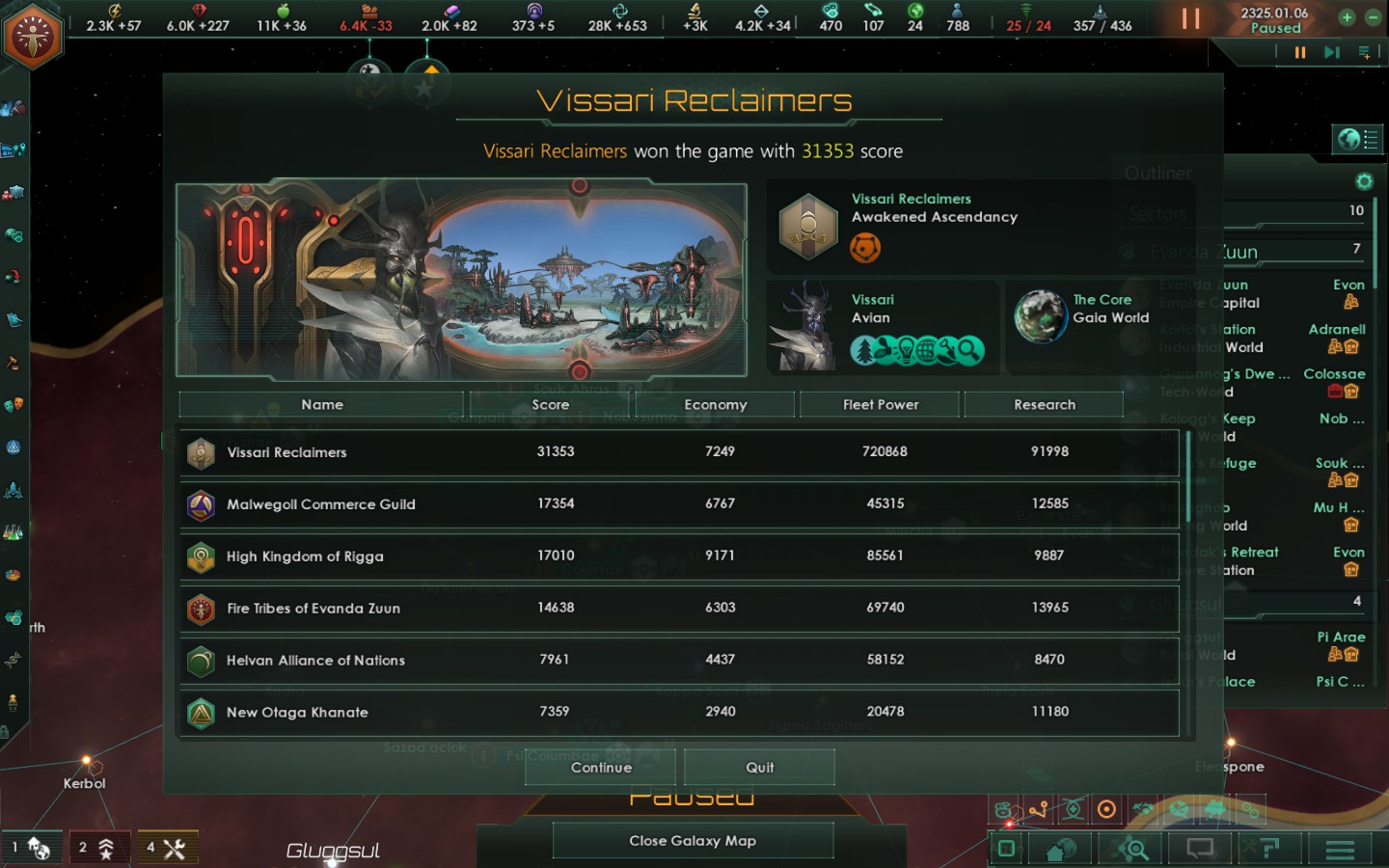 According to my calculations using the Stellaris wiki page on crises, there was about 58% chance for the Prethoryn to fire, and 16% chance for the Unbidden to appear. So there was a 26% chance of this outcome. I''l certainly play like this in the future, keeping in mind to rush Jump Drive and Synthetics!

I set the tech speed to 0.75x. Could've set it to 0.5x, I guess, especially since I have the mod that expands endgame repeatables.

My Capital near the end. Yes, the governor is Cynur - they were the demographically dominant species in my nation after I eliminated their Blood Court government (the starting horsey species was the third, after the Nivlac). I had to build Enforcer buildings to counter the crime for a Peaceful Trader Criminal megacorp to the south of my starting position. 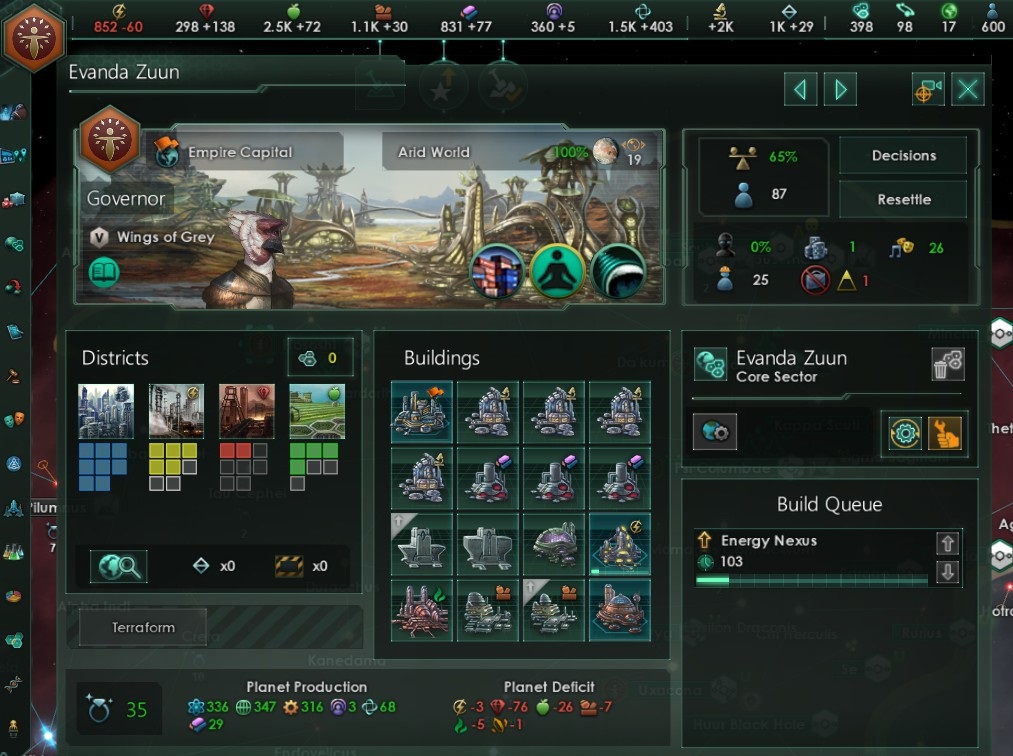 Interesting, i will probably try a fast playthrough myself...


LWE said:
I set the tech speed to 0.75x. Could've set it to 0.5x, I guess, especially since I have the mod that expands endgame repeatables.
Click to expand...

Wait, why? I thought with such an early endgame date you would have to set tech speed ABOVE 1.0.

What were your other settings?

Ah, I meant that techs now cost 0.75x of standard value - the parameter refers to cost, not “speed” as such.

Playing without a FE would be more relaxed, since you no longer would have to worry about having to compensate for the score difference with crisis ships. I guess you could also set your goal to be the second in score at the end.

My first attempt at doing this, btw, ended up with an elimination in 2280’ies, by an alliance of a regular Machine Empire and Hegemonic Imperialists on the other side.
Last edited: Jul 1, 2019
Toggle signature
My AAR's at Paradoxplaza:

1 guaranteed, I think the standard is 2.
Toggle signature
My AAR's at Paradoxplaza:

I mean the habitable worlds galaxy setting, not the guaranteed nearby ones.

Yeah, standard. I even forgot it existed.
Toggle signature
My AAR's at Paradoxplaza:

Nice little run.
Toggle signature
To view is human, to comment is divine.
"Be not afraid" - John Paul II
"The Christian way has not been tried and found wanting, it has been found to be hard and left untried" - GK Chesterton.
Current AAR: The Thorn of the Rose HoI4 The Future of the Red Lion Stellaris (on hold) Journal of the Silver Daggers Battletech
Completed AAR: In Memory of France EU2 Pax Humanitas Stellaris 1.4.1 A VictoriAARn Education Victoria II 3.2
The Great Trial Stellaris 1.9.1A Game for Lisan: Belgium EU4 1.25 Account of RCAF Bomber Command HoI4
Other AAR: Entering the First Court - Kanem Bornu EU4 1.22
View my full AAR list at The Inkwell Red Special Cookie ●
This line is necessary since the forum re-work to enable the links in the last line to be used.

Indeed! Oh, and I set AI Aggressiveness to High, for an AI that at least can be a strategic nuisance. Although I'd have lost this first Decimator war if not for the Marauder mercenaries.

After a quick test, I like 0.5 tech cost better.
Last edited: Jul 3, 2019
Toggle signature
My AAR's at Paradoxplaza:

Looks like this must have been a fascinating, fast-paced thrill ride. I might have to try something like this myself, since I rarely play a game out to completion myself...
Toggle signature
Member of the Ahistoric Association | Bearer of one free pass to History Park and owner of a free promotional t-shirt | Bestower of Red Special Cookies ● (What are they?)

Specialist290 said:
Looks like this must have been a fascinating, fast-paced thrill ride. I might have to try something like this myself, since I rarely play a game out to completion myself...
Click to expand...

Same. Around 2300-2350 I get bored because I usually have snowballed or I'm locked in some kind of stalemate, and the endgame is still too far away. Never tried this kind of "speedrun", but now i'm looking forward to it.
Show hidden low quality content
You must log in or register to reply here.
Share:
Facebook Twitter Reddit Tumblr WhatsApp Share Link
Top Bottom