Chapter 13: Upgrades in our Armed Forces

Chapter 32: The Nile is Italian?

Chapter 33: The Fall of a Friend

Chapter 35: One battle after another: The end of Iraq and the preparation for Malta

Chapter 36: Barbarossa: The Black Eagle against the Red Bear!

Chapter 44: For Property, Family and (of course) Oil! Let's finish those Bolsheviks!!

Chapter 45: The Battle for Tbilisi

Chapter 47: The oil fields of Caucasus are finally at hand! - Part 1 and Part 2

Chapter 50: Reform in the Empire

I will try to put in practical my dream: ROME as the center of the world!

This day, Mussolini had a dream: 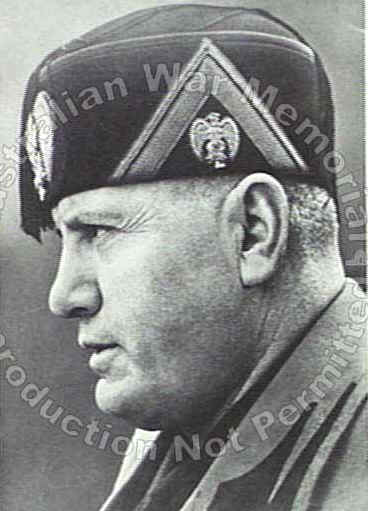 Benito Mussolini at a distraction moment​
and he defined his objectives:

Government:
Italy is at 1936, a fascist nation. After WWI, the country, betrayed by his war Allies, specially the UK, fall in conflicts between extremists, fascists and commies. After lose 1919 elections the Fascisti formed armed squads of war veterans called squadristi to terrorize anarchists, socialists and communists. The government rarely interfered. When the liberal government failed to stop the chaos that followed the Great War Mussolini organized the demonstrative and threatening Marcia su Roma ("March on Rome"). Then, at 1922 October, Mussolini was invited by Vittorio Emanuele III to form a new government.

Since this date, he started economical and industrial reforms to put Italy back to it's Great Power status. The Duce centralize power and became the first Fascist Government in the world, in which Hitler will seek a model to follow. By 1935, Italy DoW Ethiopia and there the history of Modern Mare Nostrum will begin.

Hmm, I think it's the 1st HSR Italy AAR I've seen. Oh, remember: I want an update every 3 hours
Toggle signature
Would that it were so simple.


The world is preparing for 1936 Olympic Games. Italians athletes are training in Rome. The Duce commands that the Italian Army br the major athlete corp in Berlin-1936.

By that time, Mussolini receives a card fom his friend, Hitler.

P.S.: I'm posting this AAR in a Brazilian forum too, so some words in the pictures will be writed in portuguese, but don't worry, I will translate them for you. These words writed in white means: "Italian athlete corp preparing for Olympic Games"

War in Ethiopia is about to end

*Spain is falling in the hand of the Commies. This will not be acepted by Mussolini.

*The first defeat in Ethiopia. But General Umberto assures Duce that this will not be more than a misfortune in the path to final victory.

Thanks to it's acceptance of being a Italian protectorate, Ethiopia is now seen with friendship by us.

Burgundy said:
nice start, will be following this one
Click to expand...

Thanks, we will have many posts ahead, you company will be appreciated"

Ooooh, the restoration of the roman empire! Will you ally with Germany?, if so taking Gaul for yourself could prove a problem(Normandie would be even harder).
Toggle signature
And on the pedestal these words appear:
Ph'nglui mglw'nafh Cthulhu R'lyeh wgah'nagl fhtagn

Nehekara said:
Ooooh, the restoration of the roman empire! Will you ally with Germany?, if so taking Gaul for yourself could prove a problem(Normandie would be even harder).
Click to expand...

That's one of the hardest things to do in this AAR.
I don't really know yet, the game goes until 1953, so we will discover sometime..

The victory in Ethiopia still in people hearts. They are enraptured with such a conquer. All scream "duce, duce, duce", in the streets of Rome!

With your goodness, he transfers the conquer lands back to Ethiop people.

The people loves Mussolini, everyone wants to be Mussolini. Mussolini became God in Italy.

After triumph, troops march in victorious retreat from Ethiopia.​


The German Fuhrer, Adolph Hitler, impress with the quick italian victory upon Ethiopia decides to improve comercial and diplomatic relations with Italy, sending a commercial proposal for installation of german factories in that country. The Duce accepts, looking into the future, he realizes that the germans could bring good incomes for Italian people.

why did you release Ethopia as a puppet?
Toggle signature
Multi sunt vocati, pauci vero electi : A Burgundian AAR

Burgundy said:
why did you release Ethopia as a puppet?
Click to expand...

Many troops - about 7 divisions
Lack of IC and natural resources


I just don't have interest in that region, I give them my others East African Provinces too, just want them to be powerfull enought to hold somoene for sometime if this bacame necessary, they will produce some new divisions as the time pass, divisions that I will never send there, and I need every division I can get to my next move in the mediterrean. Next update will show what target is this.

I'm betting your target is Spain.
Toggle signature
"Morality may consist solely in the courage of making a choice." - Leon Blum
"How much easier it is to be critical than to be correct." - Benjamin Disraeli

Pretty cool. I like the idea, and the historical pictures are a really nice touch

With the communist grow inside Spain, the Duce decides to act and prepares the operation TERRA NOSTRA, with these objectives:

*Prevents the surge of a Communist state in the Mediterrean
*Increase Populational and Industrial power of Italy.
*Start the conquer of the Mediterrean Sea, in order to estabalish the Mare Nostrum

In Genova we have 7 reserves divisions - being 4 montainer e 3 cav. with light tanks.


In Palermo we have 3 reserves divisions - 3 1918 Infantries with artillery brigades.

And in Sardenha, we have main attack force, with 32 Infantry divisions, composed ofr 1 HQ, many militias and 1936 and 1918 infantries with combat experiences in Ethiopia.


The Regia Marina is with yours 50 subs, DD's, CL's and BB's flotillas patrolling the Mediterrean spanish national waters. We also have 6 TPs for invasion.

The Regia Aeronautica will help with maritime patrol.


Unfourtnaly, we have to say that Italia Armed Forces are obsolet , with ours WWI aircrafts still in use.


The main objectives, within Operation Terra Nostra will be:

*Take Ibiza island, because it will be the main entertainment point that the Duce will intall in Mare Nostrum;

*Take all spanish littoral provinces in Europe, plus Madri.

*Install a pro-Italy government (this will be analised later)

I think about invade Albania and then go after Yuguslavia, but Spain is better and are more challenge.


Spacehusky said:
Pretty cool. I like the idea, and the historical pictures are a really nice touch
Click to expand...

Yes, but it is annoying to try find a Hitler photo without swastikas. :wacko:

Ahhh, just as the Romans did, you shall make your first real conquest be Iberia. Would be better if you were fighting Tunisia for it, but who can ask for too much and expect to receive it?
Toggle signature
Any people who would give up some of their liberty for a little security deserve neither and will lose both.
Benjamin Franklin
Show hidden low quality content
You must log in or register to reply here.
Share:
Facebook Twitter Reddit Tumblr WhatsApp Share Link
Top Bottom