Menu
Install the app
You are using an out of date browser. It may not display this or other websites correctly.
You should upgrade or use an alternative browser.
Imperator: Rome 8672 Bug Reports 3598 Suggestions 2333 User Mods 593 Tech Support 485 Multiplayer 54 After Action Report (AAR)

In this thread, I want to report all my struggles, failings, successes, roadbloacks, and things I don't understand when creating my very first mod from scratch. I am neither coder nor experienced modder and will entirely depend on the guides on this forum and on the wiki. The goal is to have a sort of "modding for dummies" pseudo-guide for extreme newcomers like me, and also to have my own questions answered for the benefit of those that might have the same.

Like the Wiki says, first of we create a mod through the Paradox launcher. My goal is to create some flavour events for Gadir, the two province minor in southern Spain. The Wiki says

Copy the game files you wish to mod to your newly created mod folder or create your own files, while using the same folder structure.
Click to expand...

2) First attempt at scripting
Here I follow the guides linked at the top of the forum closely. In the events folder in my mod directory, I copied a .txt document of one of the events in the original game, to keep the data formatting (BOMF-8 or something). 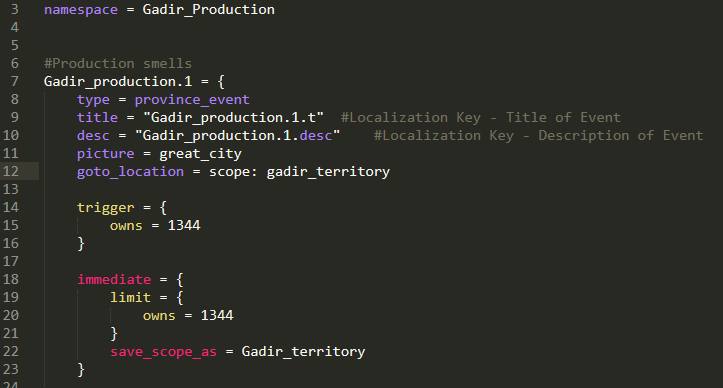 At this point, I just replaced the name & titles & description, and added a trigger that fires if the player holds the territory of Gadir. Later on I should probably make this event not fire immediately at game start but we are just learning to walk here. I also copied the part with "immediate" and "limit" from the example event in the guide. Not sure if I need this since the event just checks if you have the territory and nothing random happens.

I also saved this as a scope, to (somehow?) make it my ROOT scope later on. What is curious is that I used that scope already in line 12 as the goto_location, but only defined it (told the program it exists) in line 22. Will this work? Or do I need to define the scope first before using it?


3) Adding options
Historically, the city of Gadir was known for its production of Garum, a fish sauce made of fermenting fish. This event shall be about the smell of fermenting fish affecting the local inhabitants. The guide mentions adding modifiers, but talks about directly writing in your own game files. Since we want to share this mod on steam, I guess it should probably be saved in its own folder? Could someone confirm if my mod folder should look like this right now?


I would be very happy for your help and if you like this idea of an AAR or not. If it goes against forum rules, feel free to delete.
Last edited: May 28, 2021
Reactions:

I'm hardly an expert at modding, but I like this idea.

1) That looks correct to me, and matches what I see other mods doing.
2) I'm not sure on any of this. But ideally that should be enough to make an event pop up and you can iterate from there.
3) Yes, you'll need to create common and put modifiers inside it.

Also, I'm a bug advocate of taking a little time to learn to use git for projects like this. You don't have to host it on github or anything, but it allows you to snapshot your work when its in known good states, so you can feel free to experiment because its easy to roll back to a snapshot.
Toggle signature
Paradox Game Converters: Imperator to CK3, CK3 to EU4, EU4 to Vic2, Vic2 to HoI4, CK2 To EU4, CK2 To EU3, EU3 to Vic2, Vic2 to HoI3, Vic2 to DH, and more.
Return of the Romans: A Byzantine Megacampaign (Part I) Complete Failure (Complete): Forum
The Empire Strikes Back: A Byzantine Megacampaign: Part 1 (CK2) | Part 2 (EU3) | Part 3 (Vic2)
Reactions:

Thank you for your help! It was great and aided me a lot.

So the event should check if you own the territory of Gadir, then add a modifier. My code looks like this:


Code:
This event at the moment has only one option - this way it should de facto be a simple popup that shows you text and adds a modifier on the territory.

To make the modifier, we make a new folder, and create a .txt file in there. To all newcomers like me that might read this, it helps immensely to click through the folder structure of the vanilla game and to recreate the folder structure in your mod folder. Copy the relevant .txt files, in our case it could be C:\Program Files (x86)\Steam\steamapps\common\ImperatorRome\game\common\modifiers\00_from_events_province.txt , into your mod folder, rename it, delete the old entries, and write your own.

I followed the guide: We need folders and text files for the event code, the modifiers, the localization of both event text that you see in the popup and the mouse-over text of the modifier icon, and how often the event procs. My folder structure now looks like this:

Did I forget anything?

Now the next step is testing my code. I know there is a command that you can make an event fire, in the console commands section of the wiki there is

But how do I know my event ID? And do I need to copy paste my own .txt files into the vanilla game folders or can I already enable my own mod from the launcher?

Thanks for another update. We're moving even further into territory I don't know about, but that file structure looks correct. You should be able to enable your mod already, too. I'm not sure about the eventid though. With any luck it's just Gadir_production.1 or Gadir_Production.Gadir_production.1, but I'm not sure. Have you tried the command with vanilla Imperator events to get a feel for how it works?
Toggle signature
Paradox Game Converters: Imperator to CK3, CK3 to EU4, EU4 to Vic2, Vic2 to HoI4, CK2 To EU4, CK2 To EU3, EU3 to Vic2, Vic2 to HoI3, Vic2 to DH, and more.
Return of the Romans: A Byzantine Megacampaign (Part I) Complete Failure (Complete): Forum
The Empire Strikes Back: A Byzantine Megacampaign: Part 1 (CK2) | Part 2 (EU3) | Part 3 (Vic2)

This is a really great idea, it will help us to identify the missing pieces in our community documentation and open up some conversations about mod management.