"Last Ride of the Valkyries" A German '44 Gotterdammerung Revised AAR

They look like SPA or SP-AT? Oops, there could be one with an AA or Art?
LimaTango, what ministers are in use?
Especially interested in the ministers that affect the army: benefits: mobile combat?, speed?, defence?, manpower?
Toggle signature
If you think this game has nothing more to offer, then you are either very experienced and knowledgeable, or you have just stopped thinking.

@Sandertje Thank you for the comments and following along. There will be a little more, but I begin to lose interest if Russia is defeated.

@Blackoberst I don't have any mobile divisions with regular ART, but I do have a few with AA brigades. When the Luftwaffe was beaten into the ground, I wanted my only hard hitting formations to have some small air defense, plus in my view any brigade is a plus over no brigade. You are right that they slow the formation down, but it did not seem to make any noticeable difference.

@ MagooNZ I will have a screen shot of the current ministers and a post soom about Lessons Learned which will cover the minister changes among other things I feel that I would do differently.
Last edited: Jul 11, 2014

Research is completed on more powerful computers. The same day, the High Command meets to determine their course of action in light of Stalin’s capitulation.

Chancellor Speer decides that in addition to repairing the damage done by Allied bombers and upgrading the Luftwaffe, he would allocate resources to project the Reich’s resurgent power. Research and production capacity is allocated to the Kriegsmarine once more.

The Wehrmacht is tasked with the following objectives, in this rough order.

1. Capture the oil resources of the Middle East.
2. Ally with or conquer Turkey.
3. Seize the Suez Canal and then the other ports around the Mediterranean.
4. Drive the Allies from India and attempt to link up with Japan.
5. Seize Gibraltar. Clear Allied forces from the Med.
6. Invade and capture England and Iceland.

The last of the partisans are brought to heel. 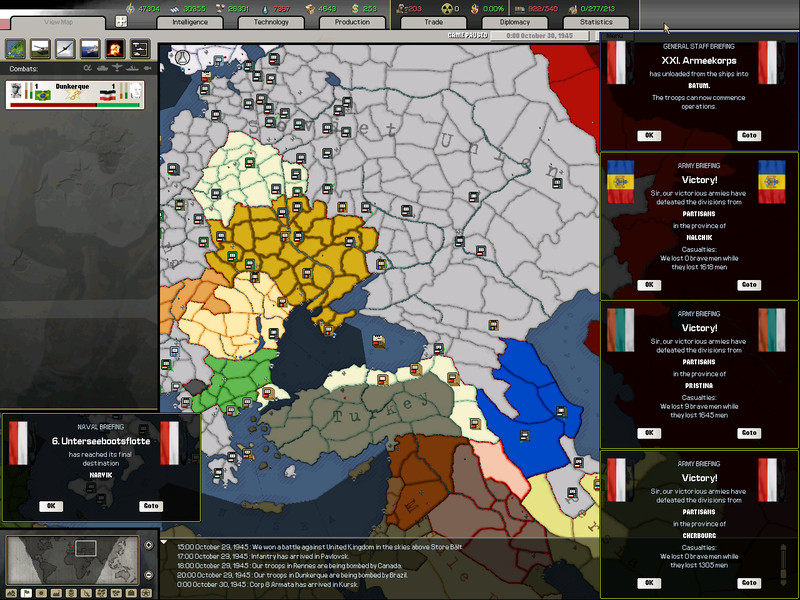 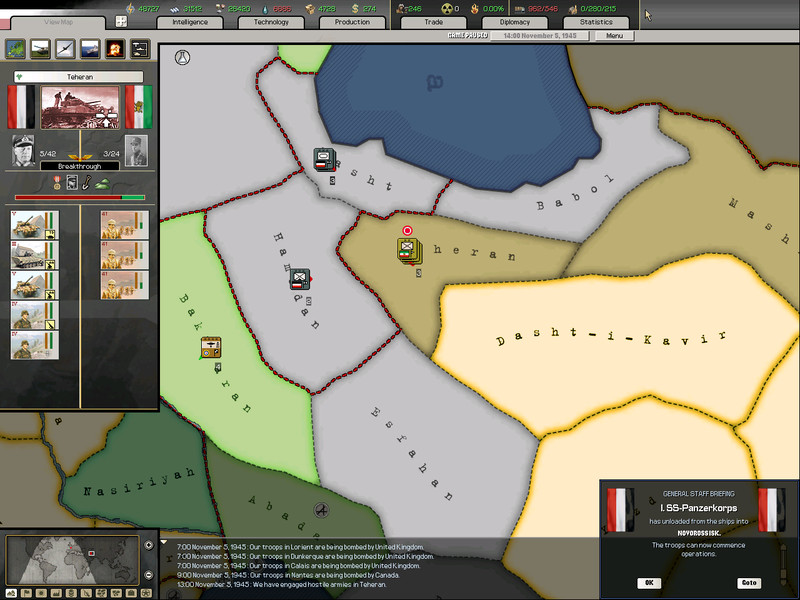 With more money coming in, more research projects are added.

The Heer begins to redeploy to the Middle East as well as the borders with Spain and Turkey. 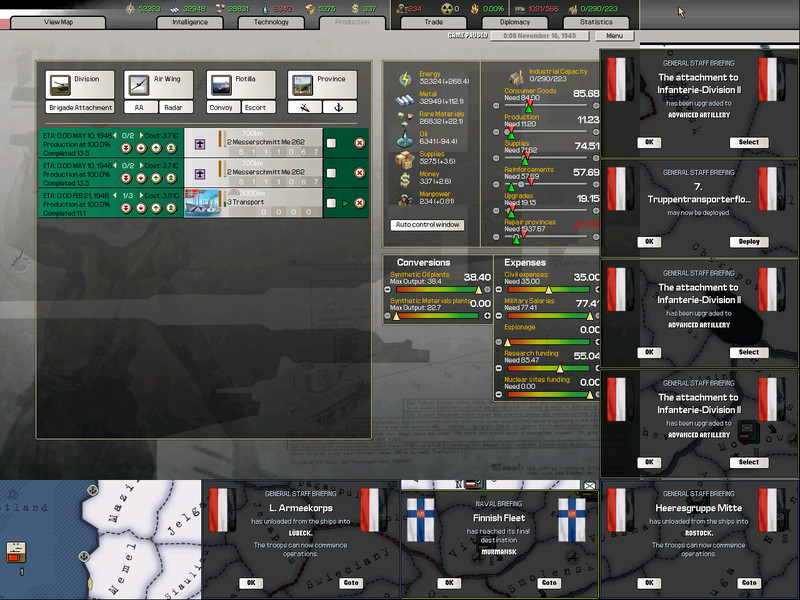 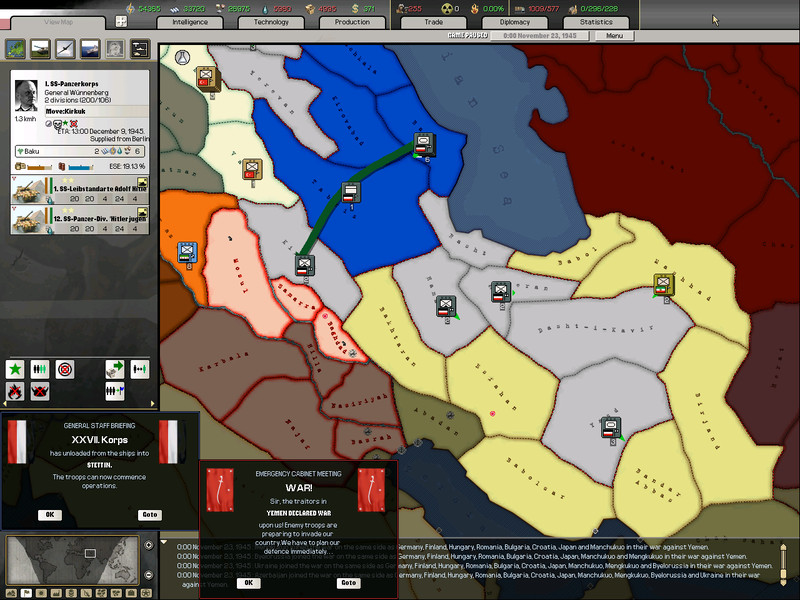 Work is completed on Improved Hospital Systems as more aircraft are added to the production queue. 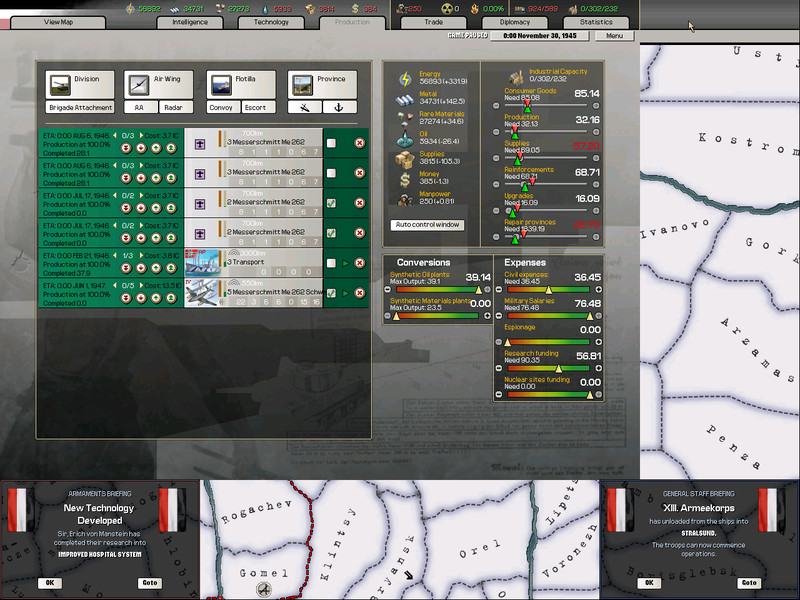 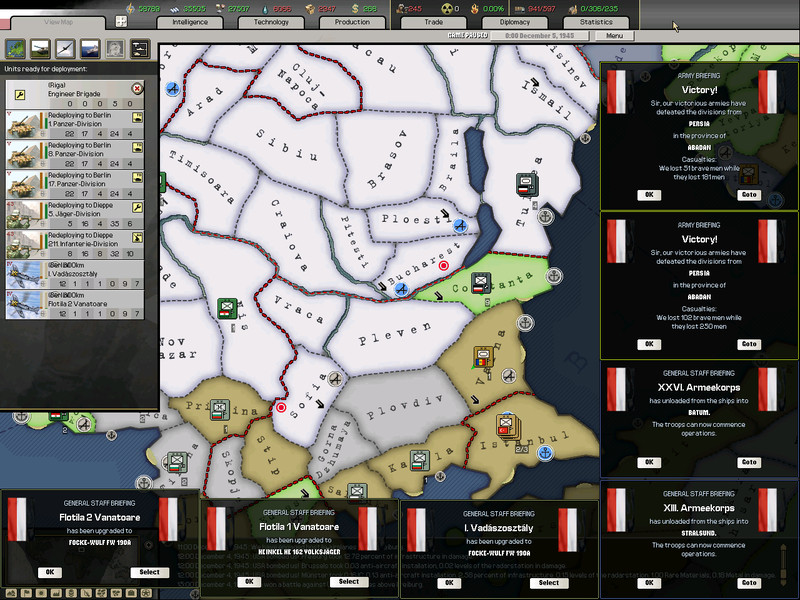 On December 13, Persia was annexed, and the assault on Iraq was already under way. 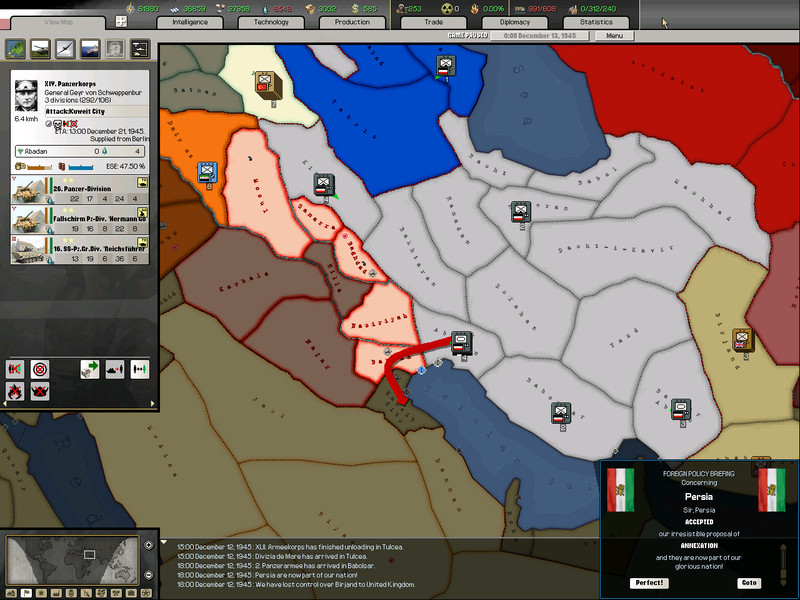 In the skies, only the R.A.F. Meteors are able to stand up to the Luftwaffe now. 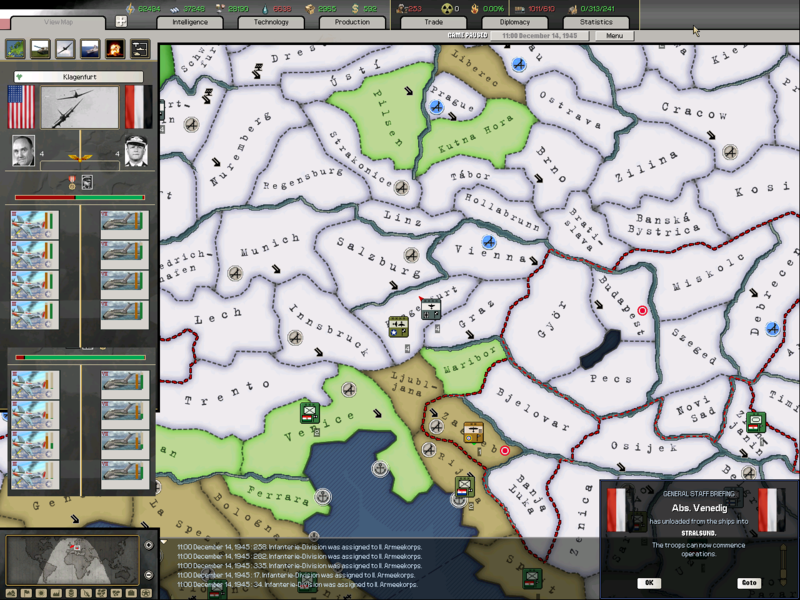 The Heer rejoices when garrison production commences, looking forward to some cushy assignments in rear area locations instead of their old bunkers on the Ostfront.

Chancellor Speer is extremely gratified to see the Reich’s production capacity (IC) rising by at least one every day. 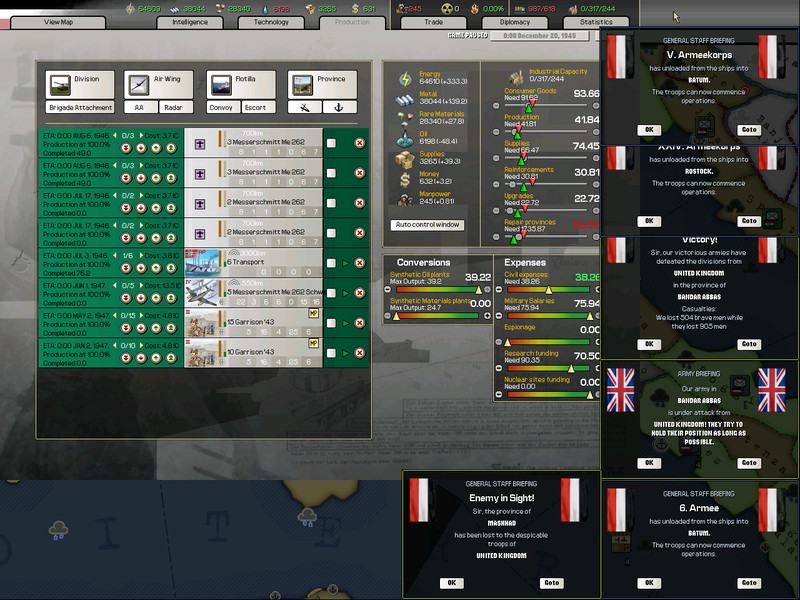 On December 21, Iraq is annexed, with Kuwait taken in the bargain. Syrian troops attempt to dislodge German forces on their borders. 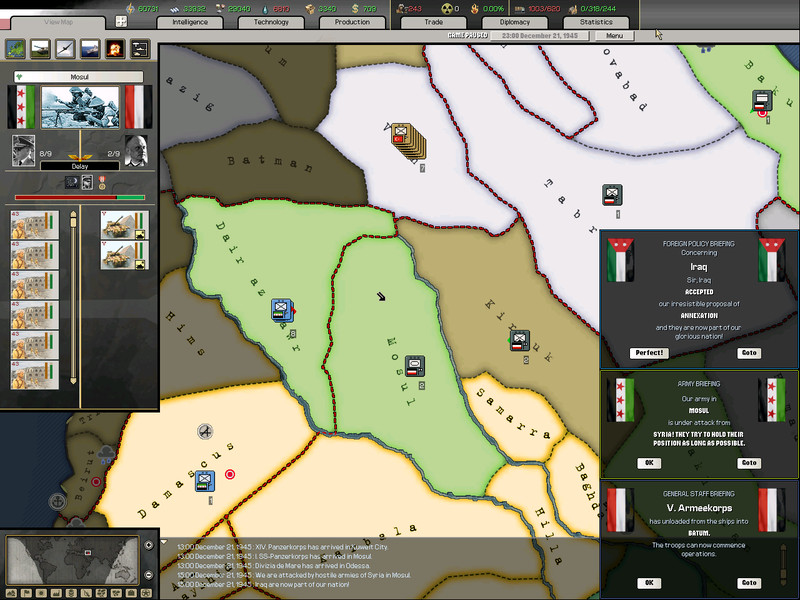 The year of 1945 draws to a close, with Germany ascendant in Europe.

Things are going swimmingly for the moment!
Toggle signature
"I'm a Hussar, I'm a Hun, I'm a wretched Englishman routing Bonaparte at Waterloo
I'm a dragoon on a dun, I'm a Cossack on the run. I'm a horse soldier, timeless through and through.
I drank mare's blood on the run when I rode with the Great Khan on the frozen Mongol steppe while at his height
I was a Red Guard and a White Guard, I was the Tzar's own palace Horse Guard when Romanov was murdered in the night. " -Corb Lund, Horse Soldier

Mkoll13 said:
Things are going swimmingly for the moment!
Click to expand...

Noone has any inherent right not to be offended.
The many shades of conservatism: From Ulster Orange to Division Azul

@Mkoll13 & Sandertje Yes, with the Bear caged, the Wehrmacht can really throw it’s weight around.

@Herbert West The USA nuked Essen in June 1945, but that is the only one I have seen. I am not sure whether I would be notified if they are using them on Japan.

@MagooNZ Here is the diplomacy screen I promised, along with my “lessons learned” which does touch on the Minister changes. Let me know if anything is still unclear. 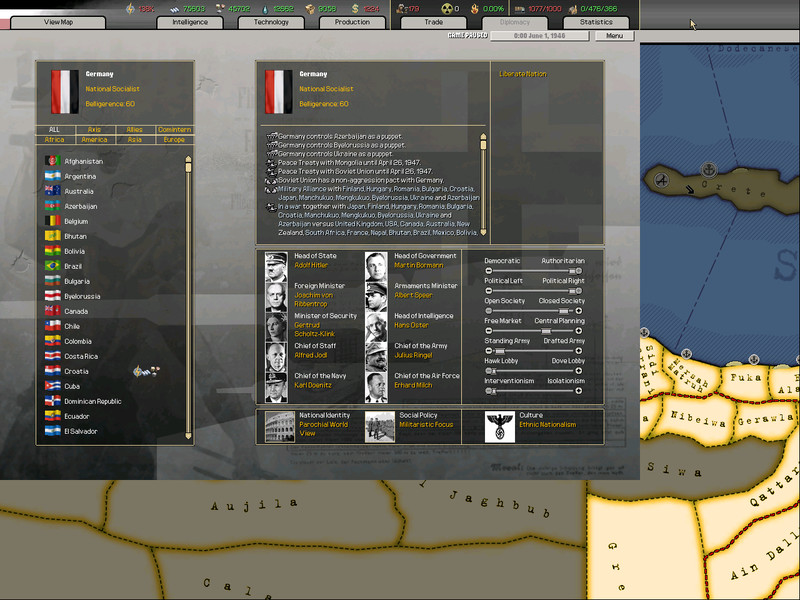 Like any good military man, I have to think about and promulgate the Lessons Learned from this AAR event. While victory was achieved there are many things that I would do differently if I was playing again tomorrow.

1. I immediately replaced three ministers, with one a bust.
a. Chief of Air Force: Milch for Goring. This one was golden.
b. Chief of Army: Installed Hoepner for Armored Spearheads. This one was a waste of time and effort. I should have gone with Ringel right away.
c. Chief of Staff: Installed Jodl for Guderian. This one worked, though I had to disband divisions at a constant rate to keep manpower flowing.
2. I immediately moved the slider to Standing Army. This I feel was justified, with all the recruits I would be installing during the war.
3. Production: I got rid of everything except some idled submarine production, then I added a line of Infrastructure in Berlin and six brigade lines, two each of Escort fighters, AT and SP-ART. This was a large waste of IC in my opinion. Doing it again I would eliminate all production and ONLY do the Infrastructure in Berlin.
4. Espionage: I spent nothing and achieved nothing and it didn’t matter at all so this seems to work out.
5. Technology: I started nine projects and I view this as another wasteful mistake. Next time I will do four, maybe five at most. I would do Encryption, Decryption, Turbojet Interceptor and Advanced Synthetic Oil Plant. The possible fifth would be Computing, which Germany has a blueprint for, to speed completion of these other four.
6. The strategy of holding La Havre and Paris and the Loire River line in the West worked out well.
7. The strategy of falling back in the East worked out pretty well. I left a sacrificial division here and there and the Red Air Force expended a lot of energy bombing them while the main force got away.
8. The master plan of tackling the West then South then North then East worked out, but I would refine that to be South first and West second if playing again. The reason is that Italy falls easily and while it is in Allied hands the bombers there are tearing up Austria, northern Italy and Germany’s allies in the Balkans. Sweeping the bombers out of Italy quickly could have saved a lot of IC for the war effort.
9. Three more ministers were changed. Klink for Himmler for more manpower. Ringel for Hoepner as should have been done right away. Oster in Intelligence for more IC. All of these moves seemed to work and I would do all of them again.
10. I kept the U-boats, formed into fleets of 6-10, and used them successfully to repel stacks of lightly escorted Allied transports. I did not use them at all for any other purpose so they survived and were cheap and useful.
11. The biggest strategic error I saw was not reinforcing and upgrading the Luftwaffe fighter/interceptor arm as immediately as possible. The Natter (rocket interceptor II) level was very effective in wearing the Allied strategic bomber command down to ineffectiveness. Had I driven this change sooner, even at the cost of postponing the Finland Operation, I may have avoided the ignominy of having my IC all the way down to 235.
12. Using the transports to move troops in the Baltic and Black Sea (by trading three of them to Romania) was extremely helpful.
13. Luftwaffe: I could not use any of the CAS or TAC without them getting shot to pieces, so I grounded them until I got some Escort Fighters in 1946. The Fighters/Interceptors should have been reinforced and upgraded ASAP, instead of at the slow pace (March 1945) that I really focused on them. By then I had a province repair need of over 2,000.
14. Heer: I disbanded HQ units when I could, keeping only 6 of them. I never upgraded any ground divisions, disbanding 1941 INF for manpower and obsolete ARM to save oil (ARM only after achieving good success on the East front in August 1945. I continually disbanded divisions to make others full strength.

Thanks LimaTango, I will go & look up the Chief of Staff and Minister of Security. I'm not familiar with them. Surprised that a slider move to CP wasn't undertaken.

I suspect that you are more than able to hold your own in a MP game. Pausing is allowed in MP, which runs quite slowly. Although since I am the novice, I only have a small country to run so I'm not getting the correct impression of workload as we are still in pre-war buildup. El Duck & Co. would be pleased to welcome you at GR.
Toggle signature
If you think this game has nothing more to offer, then you are either very experienced and knowledgeable, or you have just stopped thinking.

@MagooNZ In 1944 I made the slider move to Standing Army. In 1945 I moved a month early to Central Planning.

Thank you for the vote of confidence. I will still demur as I am away from keyboard so much of the time (and a newly broken arm is not helping!).

The Wehrmacht gains in strength, with aircraft purchased from allies and upgraded to current technology levels, and all ground forces reinforced to full strength.

In the Mideast, Lebanese forces take advantage of Syria’s annexation to advance. 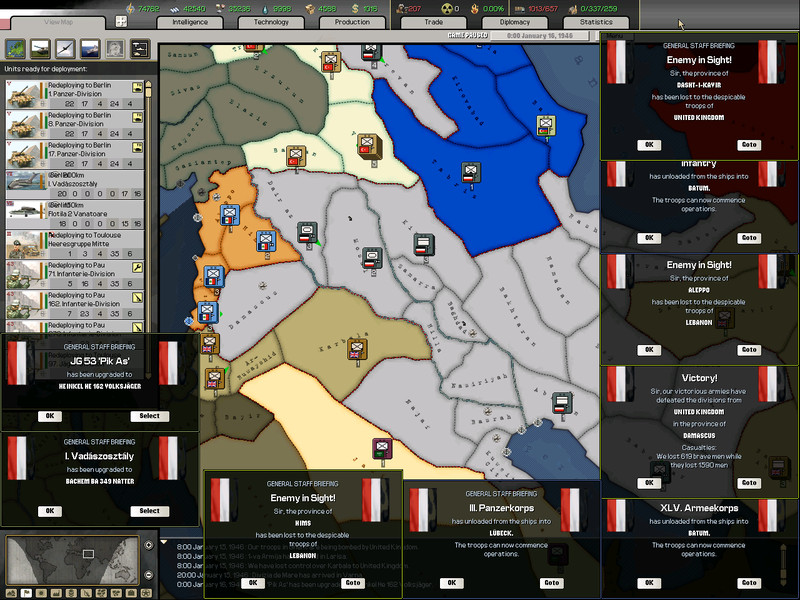 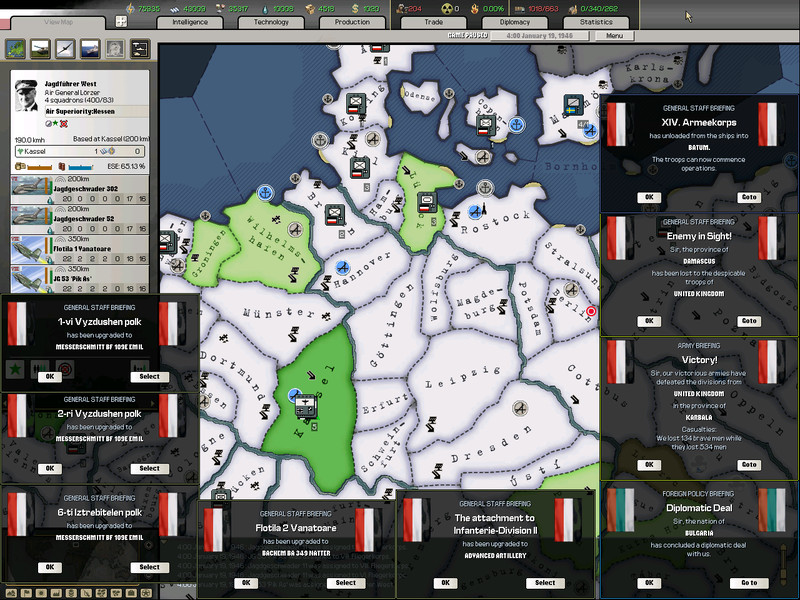 A tech advance is achieved with Japanese blueprints and still more work is made in the Light Carrier field. 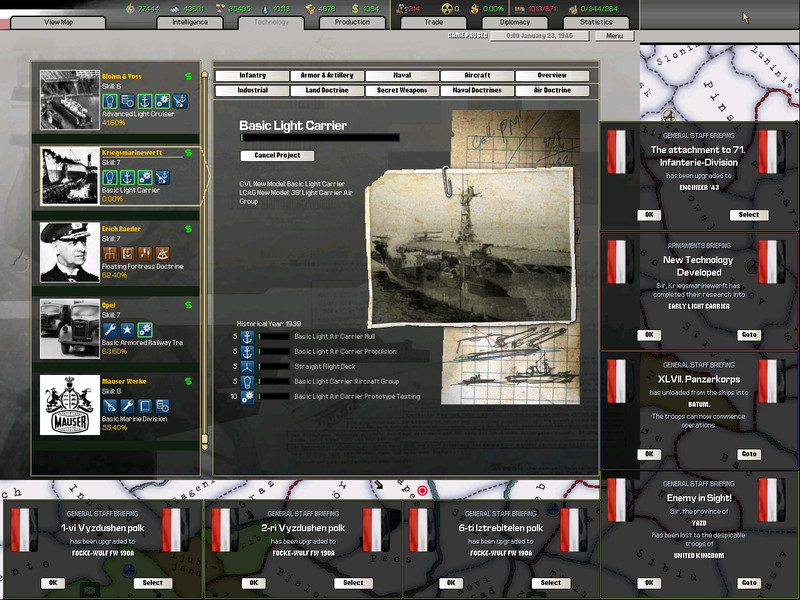 On January 26th, Von Ribbentrop demands Turkey’s allegiance, but the Turks are unwilling to take this logical step. Chancellor Speer approves the invasion from the east, to keep Bulgaria from benefitting in Istanbul. 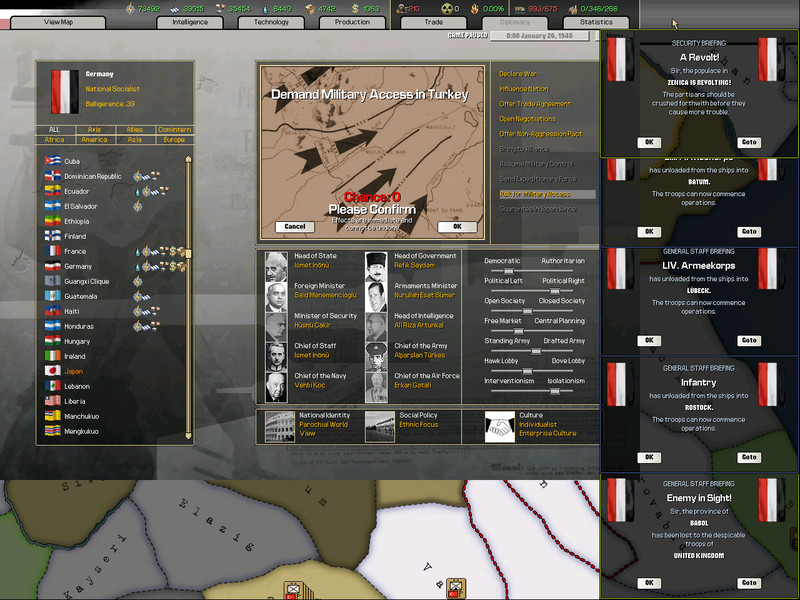 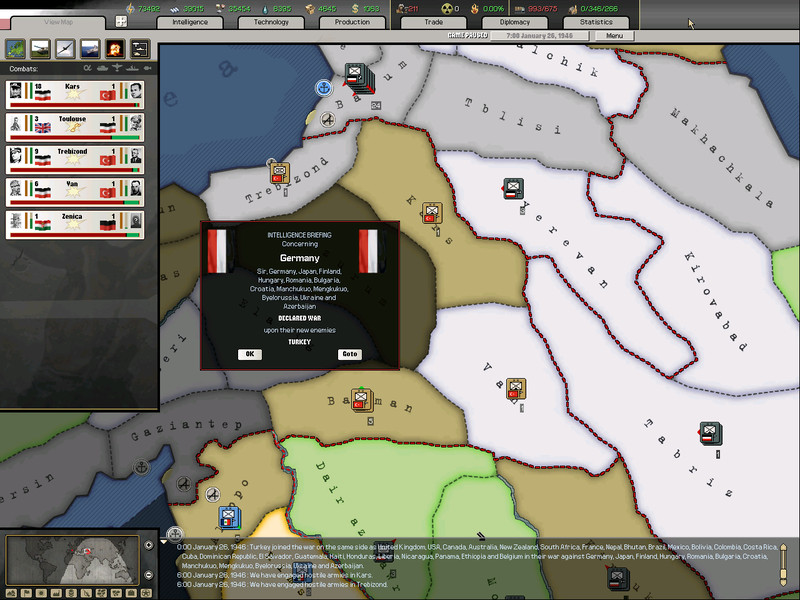 After fighting on the Russian front, the Heer brushes the novice Turkish forces aside and drive west. 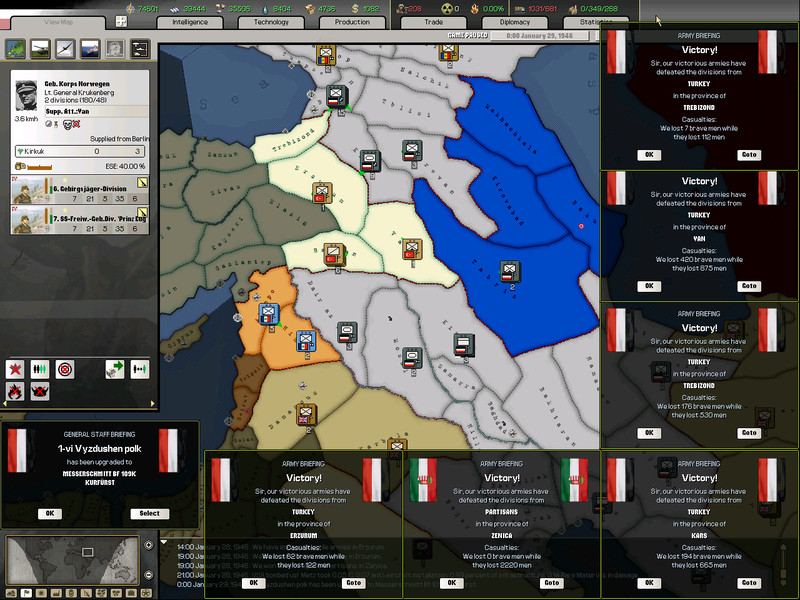 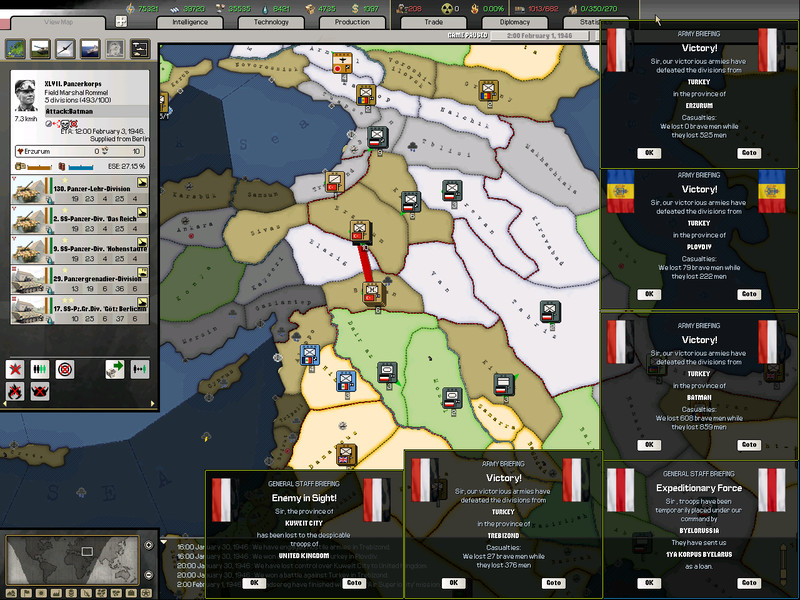 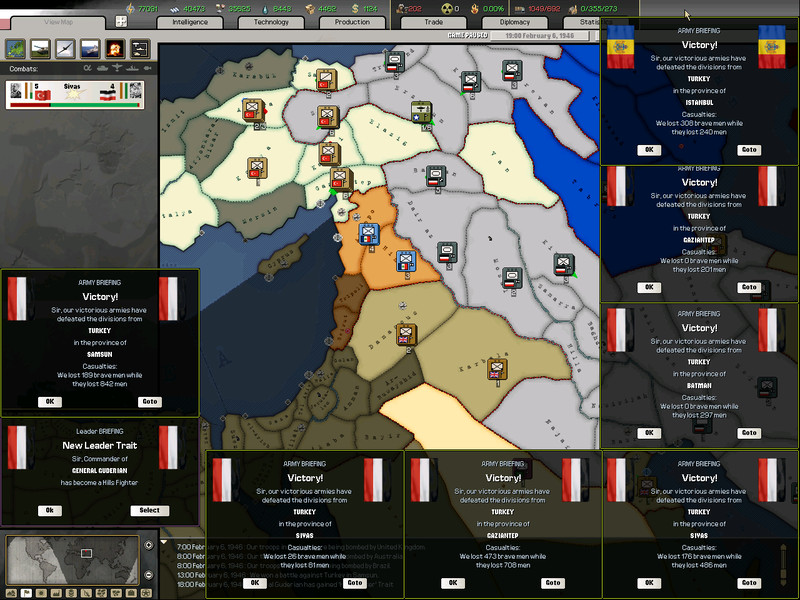 Naval researchers develop Super Heavy Battleship and then try to improve the model. Three hulls are laid down in German ports. 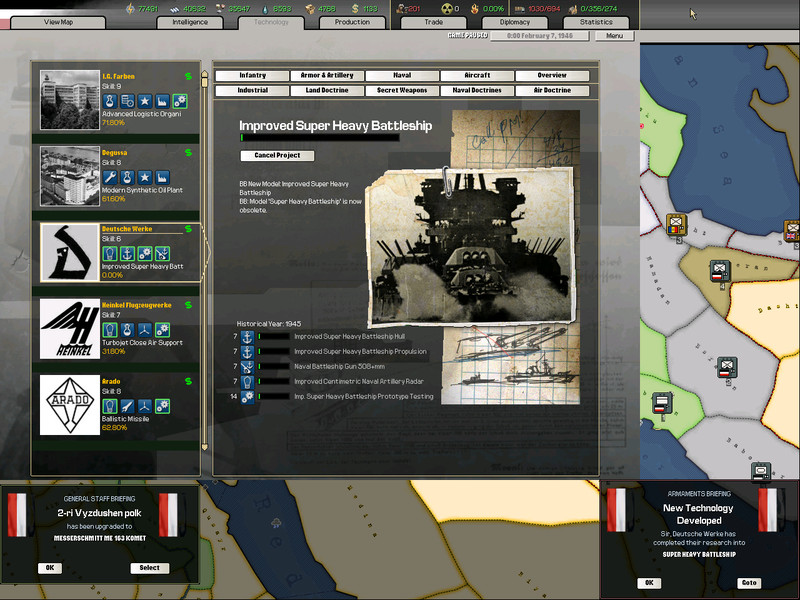 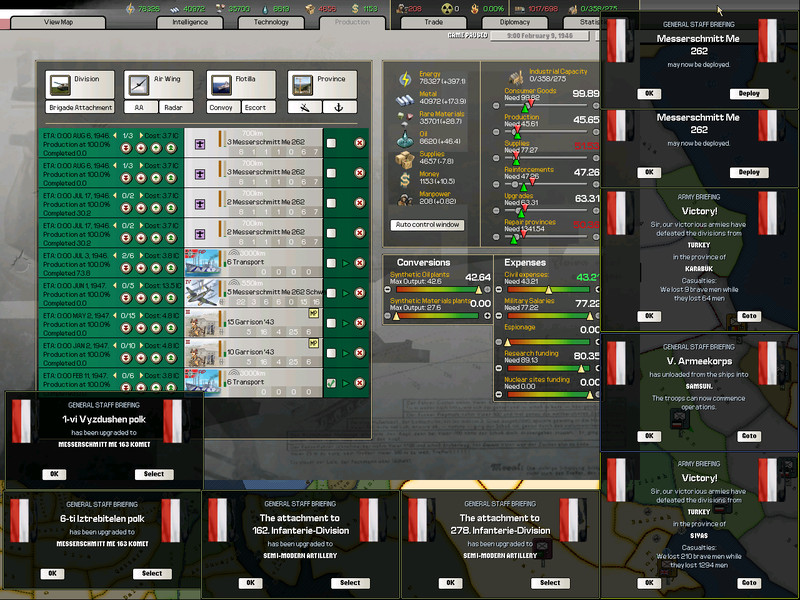 FM Rommel turns his attention to the interfering Lebanese, much to their regret. 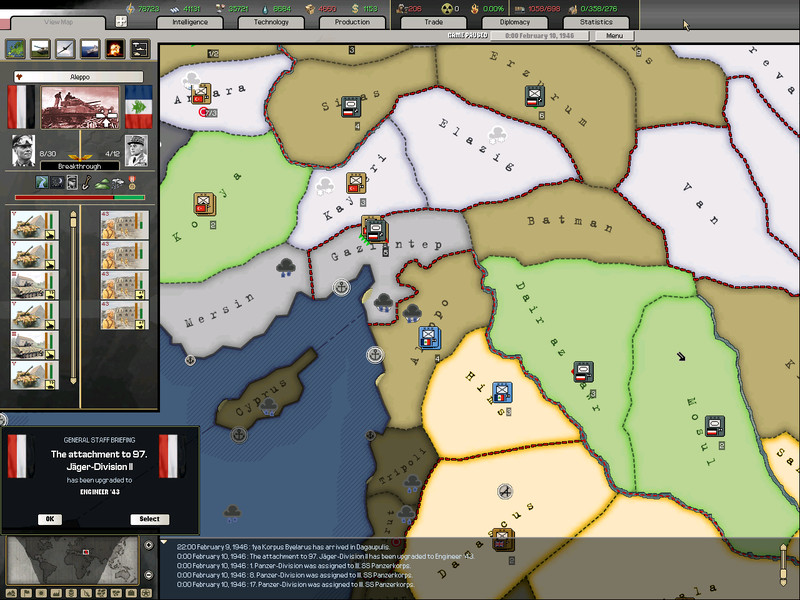 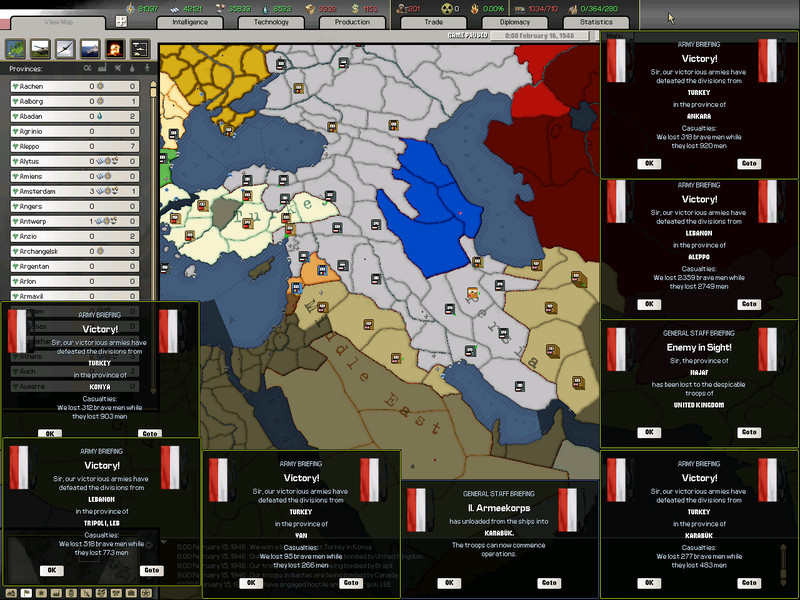 On February 20, Lebanon is annexed, leaving some British forces out on a limb. 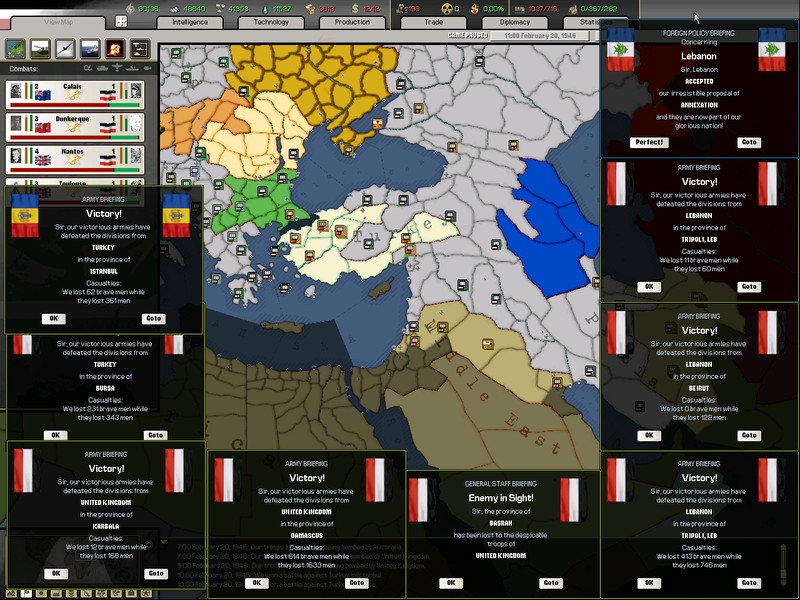 Another tech advance and now Plastics is researched. 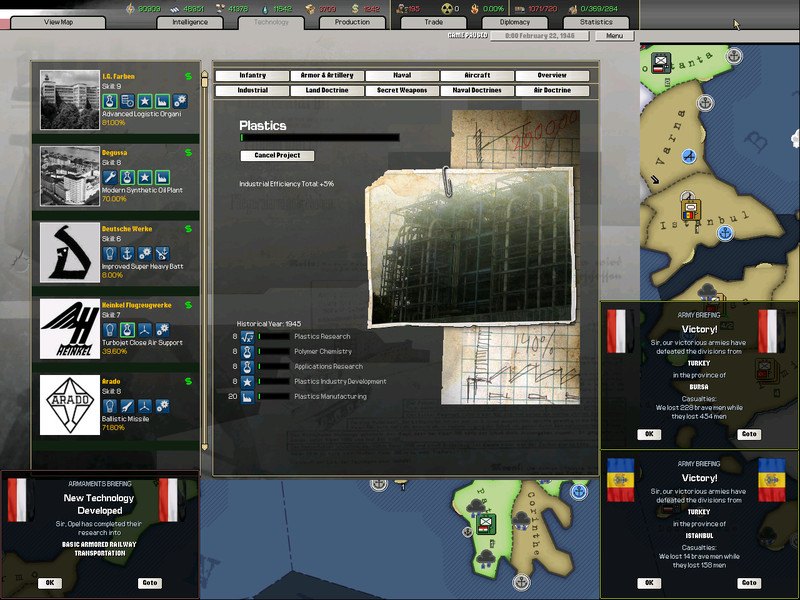 Six British divisions are in the sack in Kuwait and southeast of Beirut. The Heer seals them off for elimination. 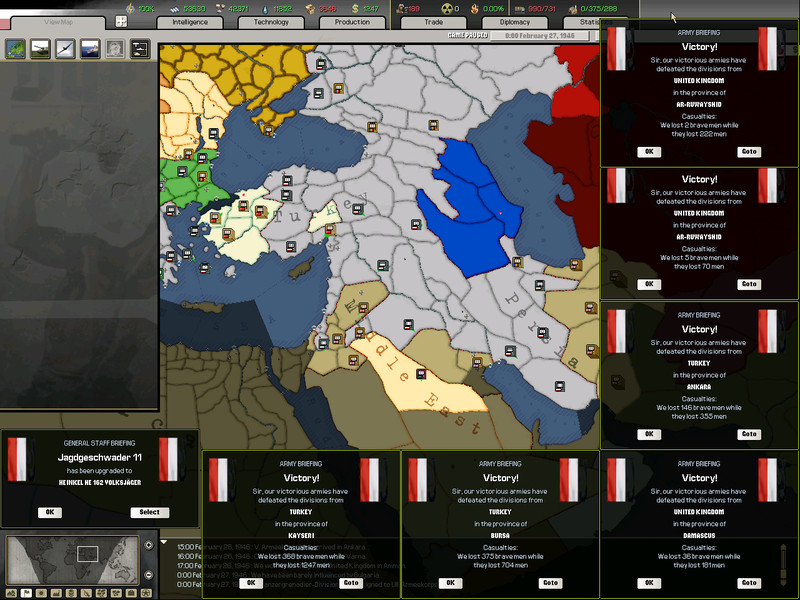 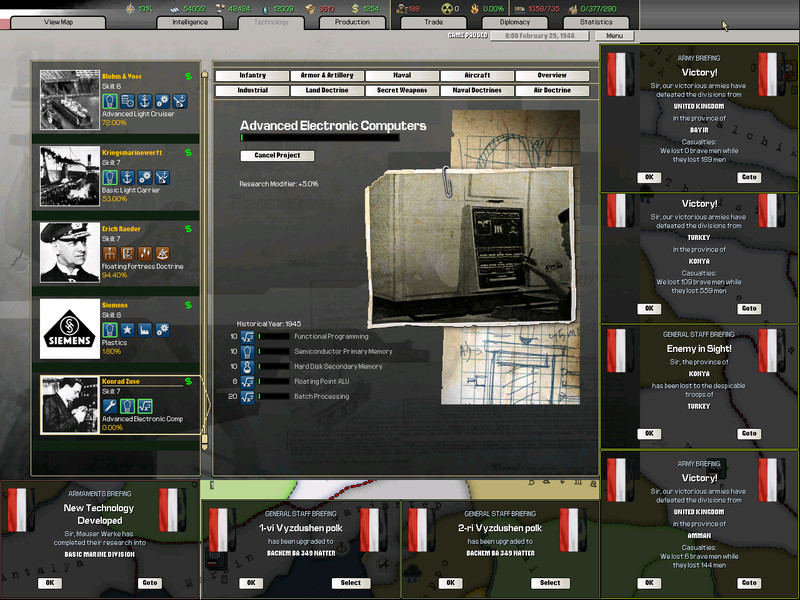 Germany continues to ship energy and oil to Japan, with about 10% getting through.

On the front lines in Persia, England has quietly amassed 40+ divisions and they strike at Tehran. 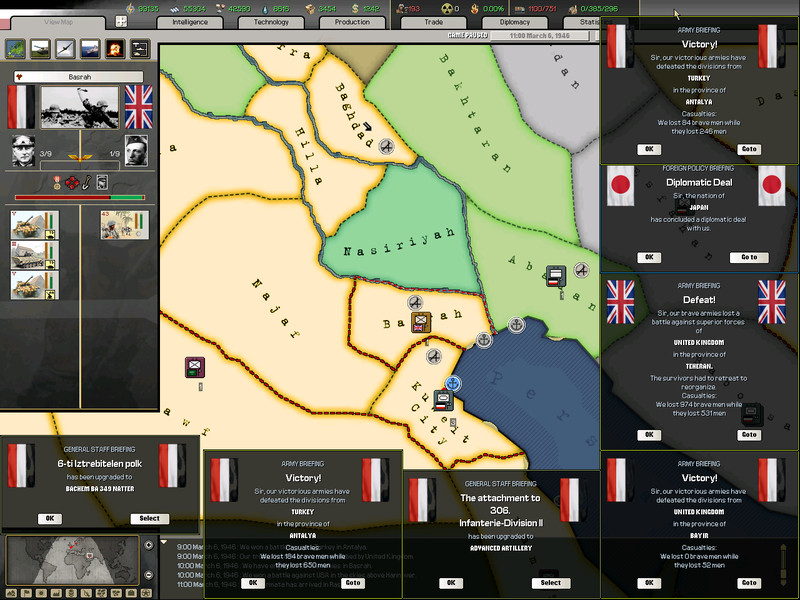