Knud Knýtling II: First as Tragedy, Then as Farce

The Muddling Adventures of Prince Knud

Knud Knýtling, Prince of Denmark (and other assorted tales)

(the quality is low because there's a lot of them. pictures that is. the low quality of the words is all my fault though.) 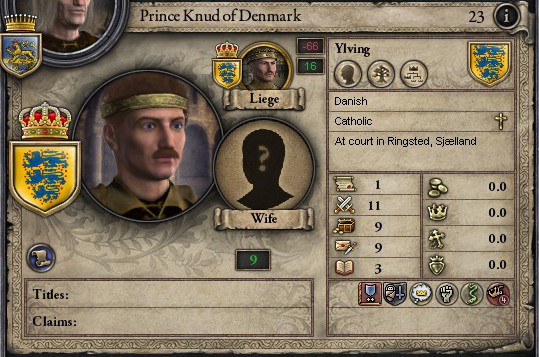 I'm officially a bastard this time, but at least I don't have intestinal worms.

Apparently, I am fearsome on the battlefield. Maybe I will get to see a battlefield someday.

I am also shockingly lazy.

This is my father, the lustful king of Denmark. His desires are not appreciated by the church. His wife is dead, so she doesn't appreciate them either.

What the hell is this? We're Ylvings now? How is that even pronounced?

I'd fix that if I weren't so shockingly lazy. 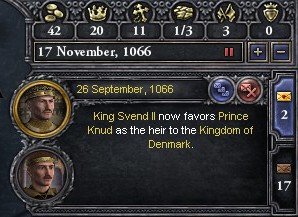 Laziness is paying off. Knud Ylving, you're a genius. 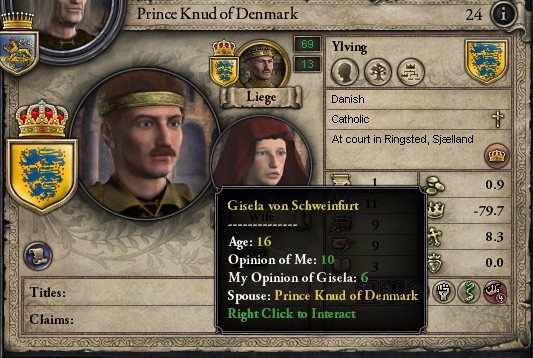 My father not only made me heir apparent, but he also hooked me up with a hot German noblewoman. We both look surprised.

My interest in translating her last name is low.

It turns out she's a little crazy. I knew it was too good to be true.

So did she, it seems. 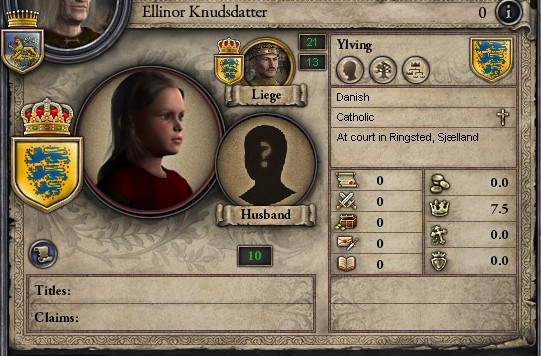 She's paranoid, and I'm lazy, but somehow we manage to get it on.

I name her Ellinor, because honestly, I am not sure how to name children when they are girls or legitimate. 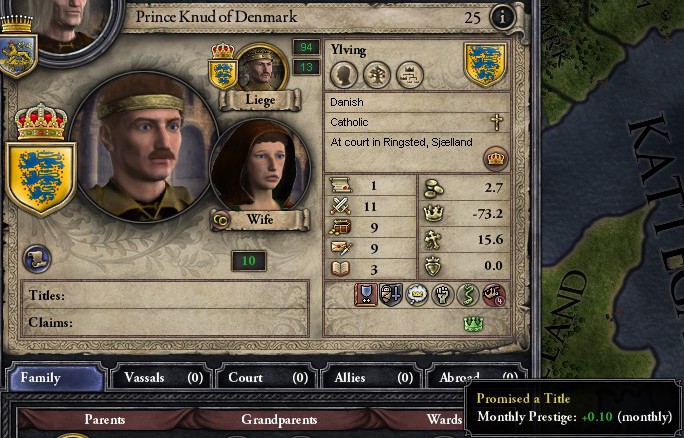 The king has promised me a title. Laziness is paying off.

Knud Ylving, you're . . . a man who can't seem to get around to fixing his last name.

Is Ellinor not a bastard? Will Knud fix is his name? How in the world is Knud zealous, and does this mean he will send all his problems to church? Stay tuned, as the adventures of Knud Knýtling, Prince of Denmark, begin!​
Last edited: Mar 28, 2012
Toggle signature
a still more glorious AAR awaits
​
S

It's like Christmas, Easter and Thanksgiving all mixed together today! Definitely subscribing to this AAR.

I sent all my problems to Church, but now they hate God. And myself.

wonderful, almost as if he's never been away
Toggle signature
Heading for a clear bright sun Steampunk meets Victorian Russia

Other people's AARs you should read:
*Valour of the North Star: Chronicles of the Hvide Clan*The Golden Nation: A California AAR*Ambition: A Stateless General's AAR*Subcontinental Subtleties: An experimental comic AAR*The Heart of Africa: A Visitor's Guide To Modern Ethiopia*Glory for Ulm: A Flagland AAR*Life in the Trenches 1936: Xibei San Ma*The Great Men of Korchev: What Became of the Unfortunate Branch of Rurikids*The Chronicles of the Golden Cross Redux*Els Ducs de Barcelona*

Hilarious as ever! The predecessor is one of the, if not the, funniest AARs ever so it's great to see this.

I don't see why Knud would have skipped the 'stache though, I like it.
Toggle signature
Read my Cuzco MEIOU AAR Children of the Sun! (ongoing)
AARland Choice AwAARd: EU Gameplay Q1 & Q2 2011, Weekly AAR Showcase 17-10-2010, ●

Fun story, I enjoyed reading this little tragedy ..
Toggle signature
to unite scandinavian as one that is my true goal in life...
Remember the Kalmar Union
//Darkie

Oh my! And so it begins! Subscribed!
Toggle signature
"The LORD executes righteousness and justice for all who are oppressed. He made known His ways to Moses, His acts to the children of Israel. The LORD is merciful and gracious, slow to anger, and abounding in mercy. As a father pities his children, so the LORD pities those who fear Him. For He knows our frame; He remembers that we are dust. The mercy of the LORD is from everlasting to everlasting." (Psalm 103:6-8, 13-14, 17)

Huzzah! Another phargle AAR, and I get to follow it from the start.

So... the Adventures of Knud Ylving, huh? And he married a Schweinfurt.

What amuses me the most is that this is a story about St. Cnut the Holy, who in real-life I'm sure would have been just as surprised to learn of his canonization as your Knud would be. Because I gather the real guy was more like your interpretation than the church's.

Lady of the North Star

You cheeky son of a ... where have you been?

Subscribed, of course, to the successor to the AAR that got me to buy CK.
Toggle signature
Sai's Inkwell - Click here to see more of my writing!
Ongoing AARs:

How long before it all goes wrong? And the wife gets sent to the church?
Toggle signature
Founder of the Lord Strange School of Thought

It's been six years since the first one?!? What is wrong with time these days - I seemed to have a lot more of it, back in the day... <Grumblegrumble>

Anyway, I'm sure a less lazy relative of Knud could go into the appropriate game file and correct the last name thingy. That said, Ylving or Knytling, this sure is off to a promising start. Especially liked Knud's observations on his dad's lustiness - and his mother's objections.
Toggle signature
Hollow Little Reign - A brief Crusader Kings tale about family ties in Byzantium.

Knud has 99 problems, but a church ain't one.


The Muddling Adventures of Prince Knud

The Muddling Adventures of Prince Knud

(the quality is low because there's a lot of them. pictures that is. the low quality of the words is all my fault though.) 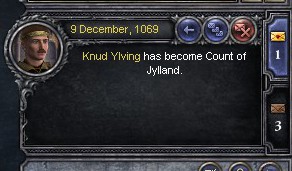 I wanted a title. I did nothing to get a title. And then I got a title. 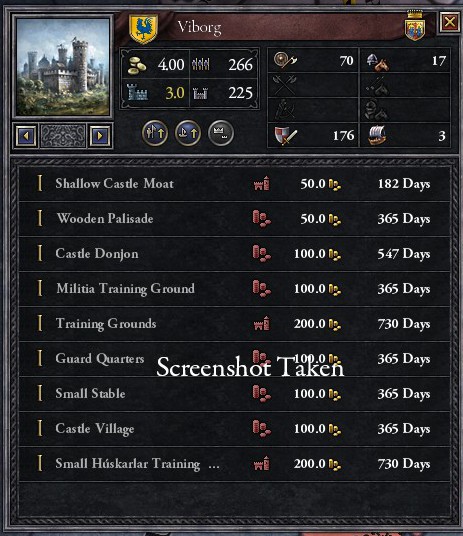 Behold my demesne: an estate with no moat, no walls, no villages, no dungeons, no guard quarters. . . 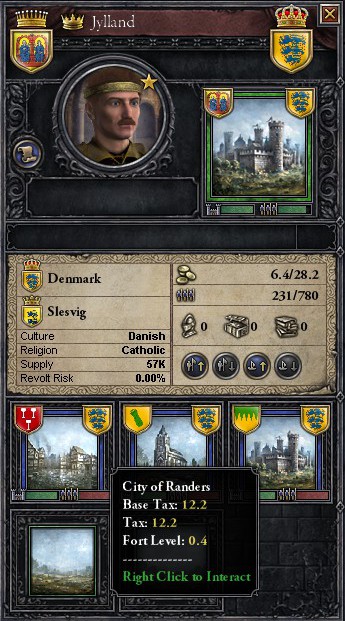 The largest village in Jylland is named Randers. Seriously.

I guess "Horners" and "Shagtown" were unavailable. 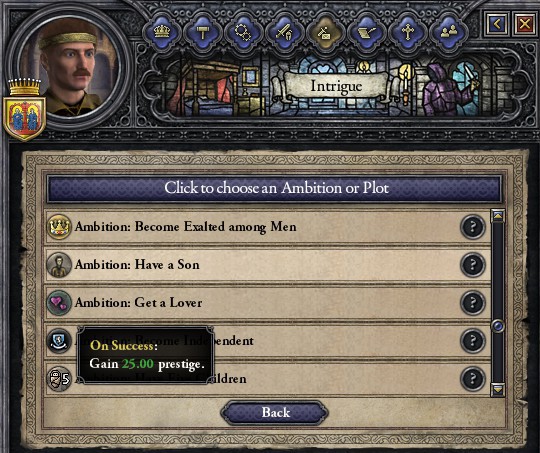 I am not sure I can become exalted among men without putting on pants, and I'm too shockingly lazy to put on pants. 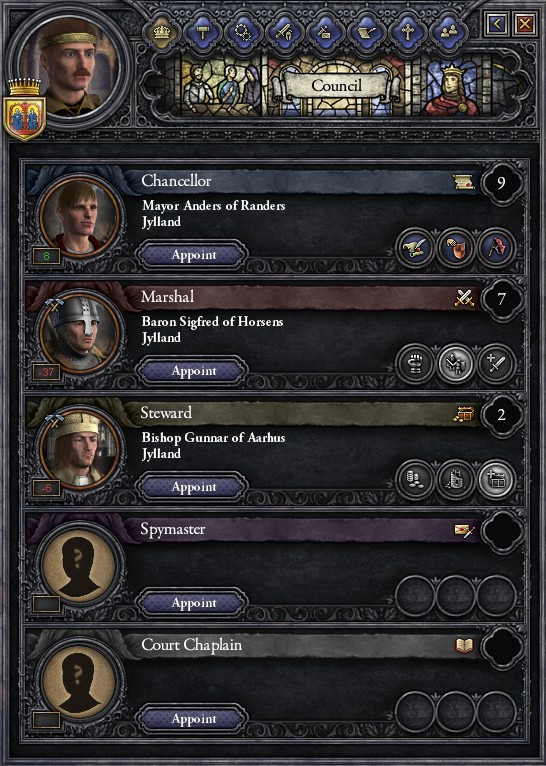 This is my council. It's missing a few important positions. I couldn't send my problems to church if I tried.

I also couldn't stop snickering about "Anders of Randers" if I tried. 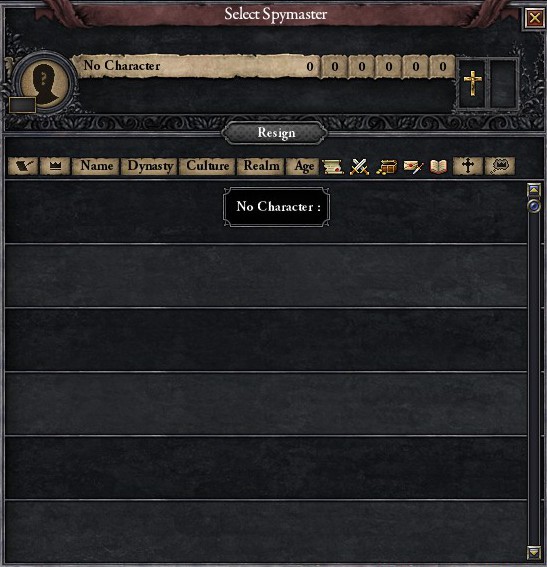 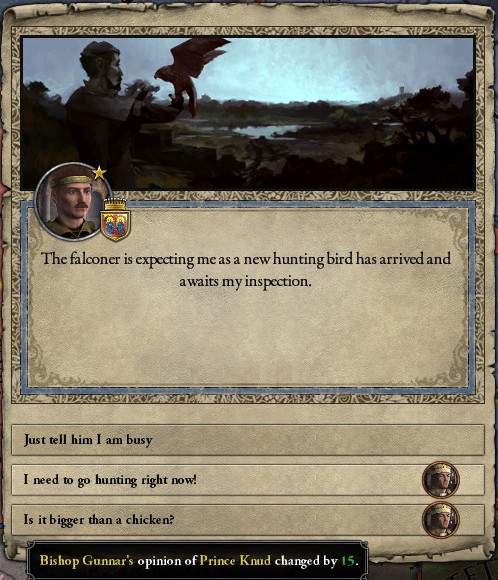 Bishop Gunnar would rather go falconing than be a steward.

I would also rather go falconing than be a steward.

I would also rather Bishop Gunnar go falconing than be a steward. If only there were some way to replace him. . .

This guy, who is legally a bastard, says he'd be a better steward than Gunnar.

His chief qualifications are having a tonsure, putting people on spikes, and hating people named Knud Knýtling. 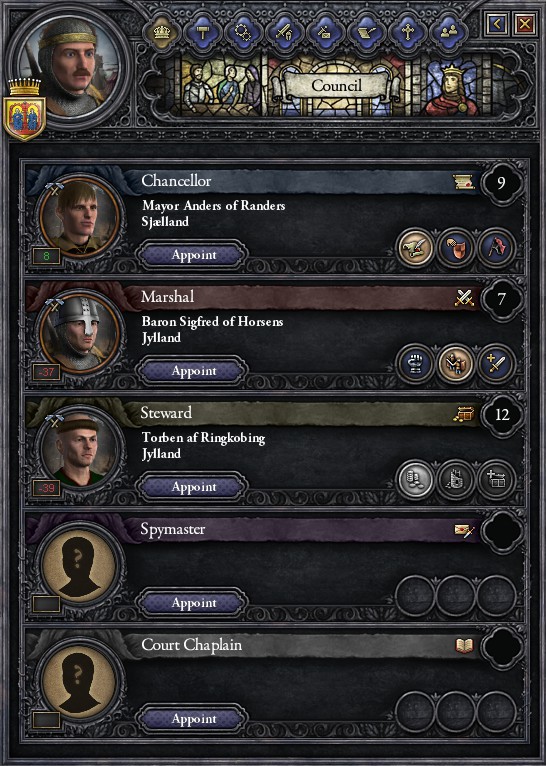 Unlike Gunnar, he can count past two, so he gets the job.

I send all my church problems to . . . wherever courtiers go when they get canned. 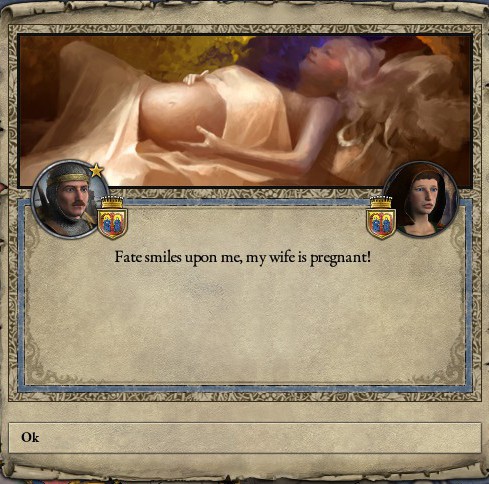 And then I bang my hot wife so hard she turns blonde.

It's like a victory lap for people who are too lazy to run victory laps.

Will Bishop Gunnar get revenge for being fired? Will Knud have a son? How is it that Knud has no problems, no church to send them to, and a hot wife? Why is Knud wearing a full suit of armor to get his wife pregnant? All this and more will be revealed in the next startling chapter of the story repetitively told before, the already-past-its-welcome adventures of Knud Knýtling!​
Toggle signature
a still more glorious AAR awaits
​

Hooray, Knud Knytling is back! I mean, Ylving. You know, that really doesn't sound right...

And he is successful without even trying, instead of attempting a lot and failing. What a topsy-turvy world!
Last edited: Mar 17, 2012
Toggle signature
Out Of Taurica - a Rurikovich AAR​

phargle said:
This is my father, the lustful king of Denmark. His desires are not appreciated by the church. His wife is dead, so she doesn't appreciate them either.
Click to expand...

I read the original some time ago and thought it was hilarious, so I'm thrilled to see it's back!
Toggle signature
Big Brother is watching you.

phargle said:
Why is Knud wearing a full suit of armor to get his wife pregnant?
Click to expand...

Lady of the North Star

You've put a Torben in charge? Are you CRAZY?
Toggle signature
Sai's Inkwell - Click here to see more of my writing!
Ongoing AARs:

You simply must send Anders of Randers on a mission to Flanders. Excellent so far. Knud is one of those wise Daoist sages who accomplish everything by lying in bed with their pants off.
Toggle signature
The SalopAARds - A CKII AAR A tale of hijinks and lowlifes in Norman Sicily.

Other people's AARs you should read:
*Valour of the North Star: Chronicles of the Hvide Clan*The Golden Nation: A California AAR*Ambition: A Stateless General's AAR*Subcontinental Subtleties: An experimental comic AAR*The Heart of Africa: A Visitor's Guide To Modern Ethiopia*Glory for Ulm: A Flagland AAR*Life in the Trenches 1936: Xibei San Ma*The Great Men of Korchev: What Became of the Unfortunate Branch of Rurikids*The Chronicles of the Golden Cross Redux*Els Ducs de Barcelona*
Show hidden low quality content
You must log in or register to reply here.
Share:
Facebook Twitter Reddit Tumblr WhatsApp Share Link
Top Bottom