Just a few questions from a newcomer

Hello all! So I've put quite a lot of time into EU3 and 4, and at some point I decided to try For the Glory as it supposedly offers the most historical content and flavour in the series. Unfortunately, I bounced off of it pretty hard after finding the UX quite difficult and confusing to understand (although coming from EU4 and not having played EU3 in quite some time, I did discover a weird nostalgia for the sliders). Anyway, I gave up for a while, but when I noticed EU1 on GOG, it occurred to me to try it out; perhaps by only dealing with the mechanics of the original game I'd have an easier time coming to grips with the basics including visual cues. This has proved to be accurate, and I now find myself quite into it after close to 10 hours. However, I was hoping for some general tips and advice as I still find myself falling into the occasional noobtrap.

Firstly, I was having a pretty bad time in combat early on, however I read online that you really need to pay attention to the combat rolls and not be afraid to retreat if they are heavily against you. This advice has helped me a little, but I'm still finding it difficult sometimes to make an effective judgement over whether or not I give up on a battle. Spain in particular has proved to be quite a formidable enemy despite me leading them by 2 military tech levels.

Second, I hate that I keep getting assigned missions which I am usually incapable of completing. Do people usually just turn off missions?

Third, once in a while I'll get a rebellion and the rebels will basically instantly take control of the province's fort, even if I have troops stationed there! Surely that fort is garrisoned by my loyal men, why don't the rebels have to siege it down first? Is this a glitch perhaps?

Fourth, I wanted to incorporate my vassal, Savoy. I initially struggled to figure out why the "annex" button was greyed out, until I discovered I could only do it once I also entered into an alliance with them (despite no mention of this on the tooltip, and why do I need a separately-negotiated alliance with a vassal anyway?). Once I tried it however, they rejected annexation, broke the alliance, broke royal ties, declared themselves no longer my vassal, and dropped relations by 100. I mean, WTF? So now I have to butter them up again to try and get them to accept vassalage (which they've rejected twice so far...), wait another ten years, then just roll the die again and hope for the best? This seems way too harsh to me, is there something I'm missing?

Fifth, I can't seem to explore anywhere, despite Spain seemingly already waging wars against the Aztecs. When I try to move a fleet into unexplored waters, I get a popup saying I can't go there before tech level 21 unless I send an explorer (I'm naval tech 9 I think) . How exactly do I send an explorer?

Sixth, is there any way to stop my budget deciding to throw everything into the treasury once I've hit stability 3? My inflation jumped to 4% in a very short time due to me missing that. (Also, does inflation ever go down?).

Finally, is it worth building manufactories everywhere? The seem to go up in price pretty steadily to the point where the extra 12 ducats a year hardly seems worth it (I've built quite a few and I'm up around 1300 for a new one now).

Anyway, that's all I can think of at the moment, hopefully someone can lend a hand!

Here's me at the moment: 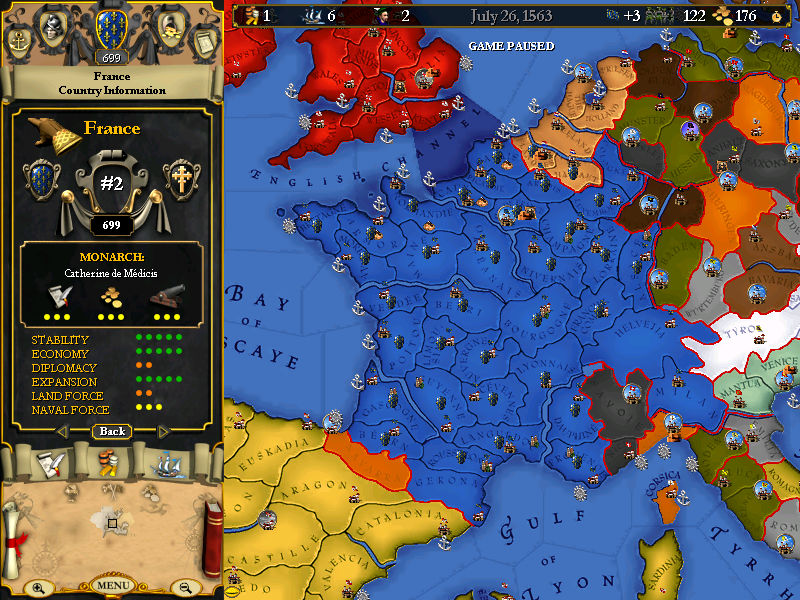 In any case, I've answered a few of my questions:

I'd still like to be better at judging when to retreat from battle, but as I increase my tech-lead it's becoming less of an issue.

I also realized I just need to hurry up and choose my own mission before one gets assigned to me, though I think I'll just turn them off in the future as they're pretty much just a distraction.

I found out explorers simply arrive by event.

Budget moving stability investment to treasury doesn't matter so much now that I have governor's mansions everywhere and inflation is no longer an issue. It also just occurred to me that I can probably just have the game pause automatically whenever my stability goes up...

Also, now that I'm freely minting a bit without gaining inflation, the cost of manufactories isn't such a big deal anymore and the added tech investment combined with yearly income feels worth it.

Still wondering if its a glitch that rebels occasionally magically take my fortress, though I haven't had rebel problems in a while so it's nbd. Still working on diplo-annexing Savoy...
Last edited: Dec 11, 2020

EDIT: Wow, I somehow missed the entire bottom part of your post. Glad you were able to figure it out!

1. Combat is definitely pretty opaque. In the early game, the most important thing is cavalry. Make as much as you can and compose your armies with about 66% cav. The infantry will soak up hits during the shock phase and hopefully give you some staying power. Use your best generals when attacking. Check the terrain that you are attacking on and try to always attack on favorable terrain. Defend in the mountains when possible.

2. I just usually try to pick the easy "Keep Province" missions to offset the impossible ones.

3. That's strange. I have noticed rebels insta-taking provinces, but if I have troops stationed in the province when the rebellion happens, they usually wipe the rebels as soon as they spawn.

4. Yeah, annexation can only be done once you have royal marriage -> alliance -> vassalization. It's a holdover from the board game. For the best shot at having a nation accept your annexation request, get them to 200 relations and station a ton of troops right on their border. Also, you might want to wait until you have a ruler with a high diplo score.

5. Explorers will randomly and historically spawn for you throughout the course of the game. Keep checking the leader tab of your ledger in case you miss the popup when one spawns.

6. No, you need to remember when you hit stab 3 to automatically adjust it down. You can get random and historical events that lower inflation.

7. If you have extra cash, build as many manufactories as you can. It's free extra investment in tech which can really start to set you apart from your neighbors. Here's a screenshot of my land tech in my most recent France campaign right after manufactories became available: 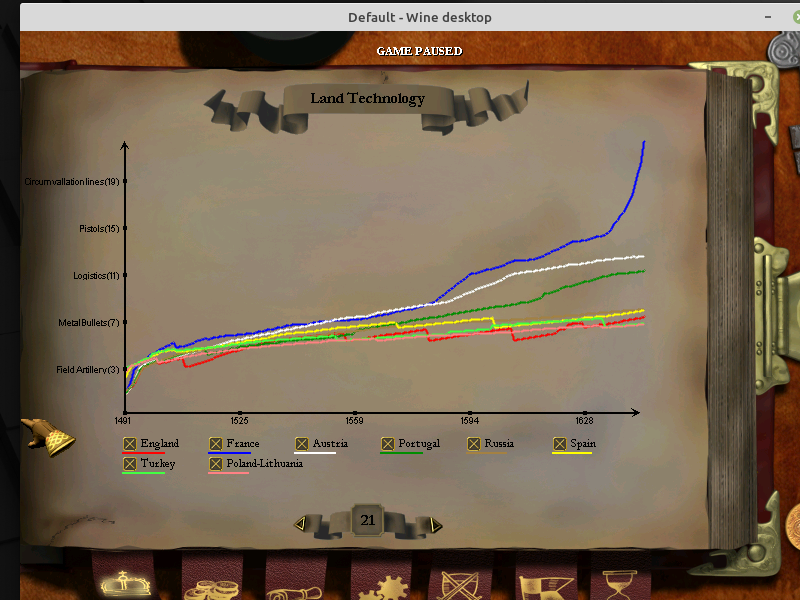 Hey, thanks for the tips!

I have to say that I'm surprised how into EU1
I've gotten. It's actually inspired me to do a little tinkering in JavaScript, maybe I could make some sort of web-based "clone" with better UI/UX, though that might be a bit ambitious...

fuzzyperson said:
Hey, thanks for the tips!

I have to say that I'm surprised how into EU1
I've gotten. It's actually inspired me to do a little tinkering in JavaScript, maybe I could make some sort of web-based "clone" with better UI/UX, though that might be a bit ambitious...
Click to expand...

If you want EU1 with better UI you might want to take a look at EU 2 and FtG.
Toggle signature
Any society that would give up a little liberty to gain a little security will deserve neither and lose both. -Benjamin Franklin