It's a Mad, Mad Rome! The "This Is Madness" Musical!

A BRIEF RETELLING OF @CzokletMuss '
"This Is Madness Saga"

​
Hello, and welcome to my first true Fan Fiction event! Although I have spent several years now producing one-shot parody songs (see my signature), I wanted to celebrate the end of my Probation (a corrupt feature that should not exist because bans are enough) by producing REAL content for the community.

What you are about to witness is the culmination of ideas spawned in the shower, and the result of listening to quality radio programming for hours on end while playing CK2, EU4, and everything else. I hope that you will enjoy this as much as I will by making it. My family calls me a master writer. I got a perfect score on my college final exam for English and high nineties elsewhere. I hope to put a sample of this God-given talent into this work, even if it's only producing songs.

Here is what each Act will present.
When the entire Musical is fully complete, you are guarenteed to receive:
As I can't remember enough details about the entire TIM saga to write actual scripts, songs will have to do.
Some Acts will be very short due to lack of content, while others will be longer due to importance and a surplus of creativity.

This Musical will be written over the course of this year, God willing.
I have written Internet stories since 2007 AD, but I have rarely finished them. During my governing tenure of one website, from 2008-2012 AD, I started dozens of stories and finished around three or so. This means that this Musical carries a serious risk of delay. I have writers' block like nobody's business.

With these introductions out of the way, let us begin the saga!

ACT I: SO IT BEGINS SONG I: "Future So Bright"
MELODY
​
We've tossed out the Doukas
Won o'er the masses
We're pumping out ret'nues like they're from our backsides

It seems all is well,
Success in spades.
The sun shines so bright, we never see shade!

I've got a plan waiting
Once I unite the nation
Fifty grand of spears will stomp the Muslims here!

It seems all is well,
Success in spades.
The sun shines so bright, we never see shade!

Well we're heavenly blessed
In God's eyes
I'm an Angeloi ruler who reached for the skys!

ACT I: SO IT BEGINS

SONG II: "Ain't That Byzantium"
MELODY
​
There's a monarch
With a slight smile
Wearing the heaviest crown.
He's got some, rebels now going through the west land.
It's all he fights, got it so blessed.

Then there's a Reverend
In Sophia
Preaching to crowds for while.
Sees the sunset:
"Hey fam'ly, remember when you go, to stop and smile!"

There's a watchman, guarding the east,
His partner speaks, no cessation.
He yawns, very loud, then he smiles
Says "Pretty much, it's vacation."
"'Cause they told me, when I was younger,
Said 'boy, you'll save us from enemies',
-but like everything else, those enemies
Never posed a threat."

Well there's nobles,
Still more nobles
What do they know?
They sit and reign from their high towers
-AND VACATION DOWN AT THE SHORES OF ACHAE-O!

With the nobles,
-and their vassals.
They ain't no big deal.

'Cause the empire, baby
Pays their men,
Their bills, their lives keep still.

Yeah, a little peace and rest,
For you and me.
Ohh!

​
{AUTHOR'S NOTE: This song is supposed to depict Byzantium at peace. It deals with only a few peasant rebels and minor issues to keep down. The bishops look to the sunset and deliver a positive message in the evenings. The watchmen have nothing to worry about in the east because the Roman levies outdo the Muslim ones.}
Toggle signature
[ ☧ ] -- Jesus loves you and died for you! -- [ ☧ ] Wormwood, it took its station
Outshone the moon at night!
Then came a great affliction
Death pain and constant fright!

Huge disease horse lords and slaughters
Blood poured down like rain
That was just the precursor
To the ultimate in pain!
'Cause then the Aztecs came!

The blood flows forth like water
From the lands of Charlemagne!
Bathe all Europe in the blood
We will never be the same!
Nahua are to blame!

Huge disease horse lords and slaughters
Blood poured down like rain
That was just the precursor
To the ultimate in pain!
'Cause then the Aztecs came!

Song IV: "Or No Way At All"
MELODY
​
{INSTRUMENTAL OPENING}

I 'gotta do it Markos
Or no way at all.

I 'gotta do it Markos
Or no way at all.

Satan had it his way
Or no way at all!

(You had to do it Markos
You sob and you cry!)

So they said "Do it Markos,"
"We will love you always"

I had to do it that way
Or else Rome would fall way!

(You had to do it Markos
You sob and you cry!)


(You had to do it Markos
You sob and you cry!)

​
Of all the songs I have written, this one is BY FAR my favorite. I may replace the large text (CRYYYY) with an image to make it larger and more dramatic looking.


{ AUTHOR'S NOTE: This song is meant to encapsulate what was, to me, the most dramatic and truly sympathetic moment in Markos' lifetime. When his realm was in danger of succession wars and factions, Markos castrated his own children. He never forgave himself for that, and I wanted to capture the dual facts that Markos HAD to do this to prevent infighting in a time of literally apocalyptic doom, and that his kids KNEW why this was being done. Markos whipped himself with a cat-of-nine-tails as his children were castrated. He bled all across the floor in an attempt to share his kids' pain. }

{ In this song, I am attempting to analyze Markos as a historian would in RL. I am sympathetic to Markos' cause and am reporting the tragedies he committed, but explaining that he had no choice in the scenario he was in. Markos would have unquestioanbly told his kids why he was about to do what he did to them. Maybe they would understand? I am rationalizing Markos' desparate measures because anything less would have been the end of Rome and everyone in it. }

{ I hold that the Cynical Trait that Markos possessed did not make him an unbeliever. If there was anyone that needed to lean on God in that story more, it was Markos. As Czoklet noted, the tragedies that led up to the Aztecs' arrival rendered Markos a shell of his former self, dead inside and numbed to everything good in life. In the Book of Jeremiah and the Book of Lamentations, the Prophet Jeremiah made similar accusations against God and asked why He was abandoning them, forsaking them, and witholding justice. God let Jeremiah vent and showed him His reasoning. }

{ I look at Markos much like I look at Biblical figures, because 1) Czoklet is that good a writer and 2) I oppose the prevailing theory that Markos was somehow a bad king or was not looking out for Rome's best interests. }
Last edited: Nov 3, 2017
Toggle signature
[ ☧ ] -- Jesus loves you and died for you! -- [ ☧ ]

Chief Chronicler of the Komnenoiverse

The Poland Balls are just eye candy and have no pertinance to the story, but yes, this is a MUSICAL FAN FICTION story. Subscribe to this thread to be immediately informed of new developments!
Toggle signature
[ ☧ ] -- Jesus loves you and died for you! -- [ ☧ ]

THE FLAYED ONE SHALL FEAST!
mongols

(PARADOX BYLAWS ALLOW FOR AAR THREADS TO BE BUMPED FROM A LONG WAY BACK IF THE STORY IS CONTINUED.) 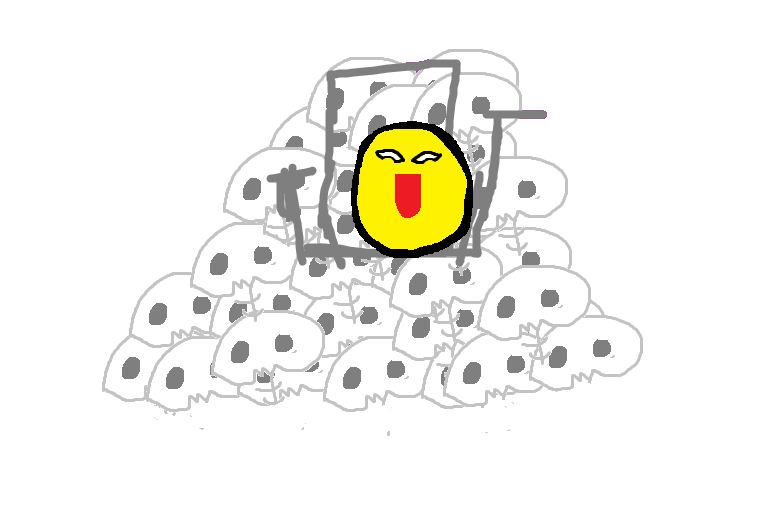 Song V: "On Thrones of Bone"
MELODY
​
{ The Khagan of the Ilkhanate is fast asleep on his throne. Enter HEIR. }

HEIR: "A city has fallen to your great horde!"

KHAGAN: "As expected. My men sure were horsing around."

HEIR: "There is no time for puns!"

HEIR: Once more we got a burnt town

KHAGAN: Quite a quick fall!

KHAGAN: We took them all!

KHAGAN: That's when the fun all begins

HEIR: Hordes are quite popular, saddle up who wouldn't, want to go raiding

HEIR: I admit, Khan, it's fun to ravage!

KHAGAN: -and ignore the Aztecs, they are childs' play

HEIR: -and we're the ones that bring the par-tay

KHAGAN: Say what they want, until we gallop in

HEIR: Then in a few days their skulls are bashed in

KHAGAN: We are monsters, the settlers whine

HEIR: They're crying foal, that suits us fine!

We come, in peace, don't take your battle stations
O-pen, your gates, and let us rule your nation

If you, say no then your land we're burning
In time, don't fight: this lesson you'll be learning

Dear king, the choice, it is yours to follow
Our men, will come back, at dawn tomorrow

Submit to, our hordes, let it be known
Lest we construct, a throne of your bones!

HEIR: "Fashioning their skeletons into a chair?"

HEIR: "You're fighting on the steppes now"

KHAGAN: "No chance at all"

HEIR: "Your corpse will be carted out"

HEIR: "Cat'phracts are nothing to us"

KHAGAN: "We'll trample you all to dust"

HEIR: "I, the Khagan's Crown Prince, laugh at Rome and their foolish pretense"

KHAGAN: "Crush the Romans with all of our horses"

HEIR: "There's no way a man can fight our archers"

KHAGAN: "That is one way to make Rome quiver!"

No peace, on earth, we ride across your nations
Blood death, and tears, that is our vocation

We are the masters, you are fertilizer
Your King will die, with kids and advisors

We'll strike you down, with our awesome power
-and all your bones, be pushing up the flowers

Submit to, our hordes, let it be known
Lest we construct, a throne of your bones!

HEIR: We'll behead their king, I can be hopeful!

{ KHAGAN SOLO }
Look, take as a promise
Conquest is what we accomplish
The City, of World's Desire
Will burn down to ashes in a greater fire
The closer we come, the bloodier it gets
Rome and the Aztecs will all be DEAD
Ha! Rome warns us of Hell
-but here on earth, thing won't go well

HEIR: Watch as we ride through your town

KHAGAN: It's all our fault

HEIR: Those who survive this razing

KHAGAN: Will know meaning of crazy

HEIR: Don't mess around with Mongols

KHAGAN: Your future will be hazy

HEIR: You call God but there's no replying

HEIR: 'Cause it's the sky you should be scrying!

KHAGAN: Your God ain't real and that's a fact

HEIR: I'll put down your priest with one quick attack

HEIR: DAD YOU'RE A JERK

KHAGAN (cutting off): You know I am fond, of Morin-Khuur*!

HEIR: ONE MORE PUN, AND I'LL HIT THE ROOF

KHAGAN: Come on my son, you're my better hoof!

We come, in peace, don't take your battle stations
O-pen, your gates, and let us rule your nation

If you, say no then your land we're burning
In time, don't fight: this lesson you'll be learning

Dear king, the choice, it is yours to follow
Our men, will come back, at dawn tomorrow

IT'S FINALLY BACK, AND ABOUT TIME TOO.

HA HA! -AND YOU THOUGHT THIS MUSICAL FAN FICTION WAS OVER! HA! YOU ARE SO WRONG!
THE MUSLIM WITCH-KHAN IS NEXT.