Is the range of the Longe Lance Torpedo part of the battle-equitation?

Description
The Type 93 was a 610 mm-diameter torpedo of the Imperial Japanese Navy, launched from surface ships.

Answer: No, it does not.
Toggle signature
No! No work for you. Bad Eugen Bad. From now on you just sit at your computer and make AAR's and play darkest hour or other assorted games by paradox.

In the literature there is no doubt that the Japanese had the best torps.

Some mods provide you with special boni for extraordinary achievement in weapons like the German 8.8 AA giving a bonus to hard attack for all AA. I am not aware of a mod giving a bonus to torps, though.
Toggle signature
Darkest Hour (an HoI2 game): How to build a powerful Navy from nothing: Operational Example

Altruist said:
In the literature there is no doubt that the Japanese had the best torps.

Some mods provide you with special boni for extraordinary achievement in weapons like the German 8.8 AA giving a bonus to hard attack for all AA. I am not aware of a mod giving a bonus to torps, though.
Click to expand...

The TGC mod gives a bonus to Japan for its torpedoes. I'm pretty sure it's from the AIO mod, which is incorporated into TGC
Toggle signature
"Was your court at the trial of Visser constituted in any way like this, what rule did you shoot him under?"

"Like this?? ... oh no sir, it was not quite like this... no no sir, it wasn't quite so handsome...and as for rules... we didn't carry military manuals around with us... we were out on the veldt fighting the Boer the way he fought us.... I'll tell you what rule we applied sir, we applied Rule Three-OH-Three .... we caught them and we shot them under Rule Three-OH-Three!!!!"
Reactions:

Anyone know how to implement it in Egde Of Darkness? Looking good Nick, as always. I need to download your mod again. Could not get it to work last time.

When that is said, a single Japanese submarine may have the biggest score in the whole war. I am not sure, but I think it was 1 US carrier sunk, 1 US battleship damaged and 1 US destroyer damaged as well - in the same fire-order. Thus, 3 torpedoes hitting 3 US warships in the same attack!

Another problem with Japanese OPCON was substitution of micromanagement for commander's intent. The inclination of Japan's admirals was to centralize operational and tactical control of the boats. Instead of assigning large patrol areas in which to conduct unrestricted submarine warfare (as was the practice in Germany and the United States) individual unit captains were given precise locations and inflexible tasking. To make matters worse, operational commanders frequently positioned their submarines like pieces on a game board. Often the speed the boats were ordered to make by shore directive could only be achieved by traveling on the surface. Many submarines were lost during these ill-advised transits.18 Japan's admiralty was so enamored with micromanagement that they also allowed themselves to be dragged into prescribing tactics. In one particularly stunning instance, the officer holding OPCON was expected to dictate the number of torpedoes that were to be expended on a given target.19 Japan's ad hoc OPCON systems and smothering leadership produced disastrous results. Unit Commanding Officers (COs) obediently followed orders but rarely demonstrated initiative, cunning, or daring. Paucity of operational intent, combined with timid COs, rendered the entire submarine force impotent.
Click to expand...

Another glaring problem for the Japanese submarine force during World War II was lack of operational focus. Specifically, operational commanders frequently tasked boats with missions for which neither the crews had been trained nor the boats designed. The most dramatic example of this problem was the use of submarines for supply missions. Although the Navy strongly opposed the concept of submarines as supply ships, desperate Army generals persuaded Imperial leadership to go forward with the idea. Japanese submarines successfully destroying merchant shipping in the Indian Ocean were recalled, torpedo tubes were removed, weapons were offloaded, and cumbersome external transport devices were attached. Angered by the Army's interference, the Navy made minimal effort to address critical shiphandling issues or mission safety. Defenseless and often wallowing on the surface attempting to deliver insignificant guantities of food and munitions, Japanese submarines suffered devastating losses executing these poorly conceived ventures.20 Supply delivery was not the only example of poor Japanese mission selection. Commanders freguently ordered submarines completing patrols to stop near allied bases and attempt shore bombardment. Eguipped with small caliber deck guns and lacking rapid topside reload capability, the boats found themselves outgunned and under attack by the very installations they were supposed to destroy. Instead of letting the submarines conduct missions for which they were designed (offensive mining, for example) Japanese leadership continually assigned shore bombardment as a means to interrupt harbor operations.21 Communications were an additional deficiency that plagued the Japanese submarine fleet. Using decoded enemy tasking messages, U.S. convoys bypassed known submarine patrols. By taking advantage of precise Japanese station keeping, American anti-submarine warfare (ASW) assets also freguently turned knowledge of Japanese submarine positions into kills. For example, in 1944 U.S. intelligence determined that ten Japanese submarines had formed a screen in the Philippine Sea. Armed with this information, three U.S. destroyers systematically dissected the screen and sank six boats. The other submarines in the group managed to reposition and escape, but only after they intercepted American messages intended for Hawaii. Strangely, the surviving boats were never warned by Sixth Fleet Headguarters.22
Click to expand...

A final indictment of Japanese submarine operations lies in leadership's total disregard for technological developments. By 1943 most American vessels were fitted with effective radar sets. Yet, the Japanese did not install them on their boats until late 1944, despite impassioned pleas from submarine COs.23 Chief among the reasons the Sixth and Combined Fleets hesitated to force the Naval Technical Department to install available radars was fear of expending political capital on a device of guestionable utility.24 As numerous nighttime ambushes on Japanese boats attest, the Fleet Commanders' priorities and vision were fatally flawed.
Click to expand...

InfArmMot said:
So in the game, we actually need an event, where the Japanese player can decide to use the submarines as underwater supply boats.
Click to expand...

I think no player (unlike the Japanese) will turn their submarines into convoys, even if they will have such event, because it would be too irrational.

By the way, for Americans, I will definitely make a trolling-event right after Pearl Harbor, when I finally finish my US modding.
As I found out, they had as many as three (!) epic fails associated with excessive savings on real practical tests of weapons and equipment in pre-war years:

I think no player (unlike the Japanese) will turn their submarines into convoys, even if they will have such event, because it would be too irrational.
Click to expand...

True, it is too irrational, - still, hm? ..perhaps it could be a historical decision for the hardcore players? Playing Japan the real way, using this Kamikaze Submarine Strategy, - a real challenge.

Right, yes, they did have their problems in that period. The US was a non-military power back then, so it makes sense they would have skipped essential practice.

3 warships hit with 1 torpedo-salvo!
I found the japanese submarine hitting three USN warships in one salvo. Had the IJN used a decentralized doctrine and allowed its submarine commanders to work as their US and German counterparts, I think the IJN would have damaged the USN in a serious manner.

On 15 September 1942, while patrolling south of the Solomon Islands during the Guadalcanal Campaign under the command of Commander Takakazu Kinashi,[5] I-19 sighted and attacked the U.S. carrier Wasp, firing six torpedoes. Three of the torpedoes hit the Wasp, causing heavy damage. With power knocked out due to damage from the torpedo explosions, Wasp’s damage-control teams were unable to contain the ensuing fires. She was abandoned and scuttled.

O'Brien hit by torpedo as USS Wasp burns. Both ships were torpedoed and sunk by I-19.
The remaining three torpedoes from the same spread (torpedo salvo), often incorrectly attributed to a second Japanese submarine, hit the U.S. battleship North Carolina and the destroyer O'Brien, the latter of which later sank en route for repairs on 19 October 1942. Significant damage had been sustained by North Carolina, which underwent repairs at Pearl Harbor until 16 November 1942.

This single torpedo salvo thus sank an aircraft carrier and a destroyer, and severely damaged a battleship, making it one of the most damaging torpedo salvos in history.[6]

Further information: Sinking of USS Wasp and Sinking of the USS O'Brien

Wasp going down after three of the 6 torpedo salvo has hit her. Wasp, by the way, was the first Aircraft carrier with a deck-elevator.
She carried some 100 aircrafts. 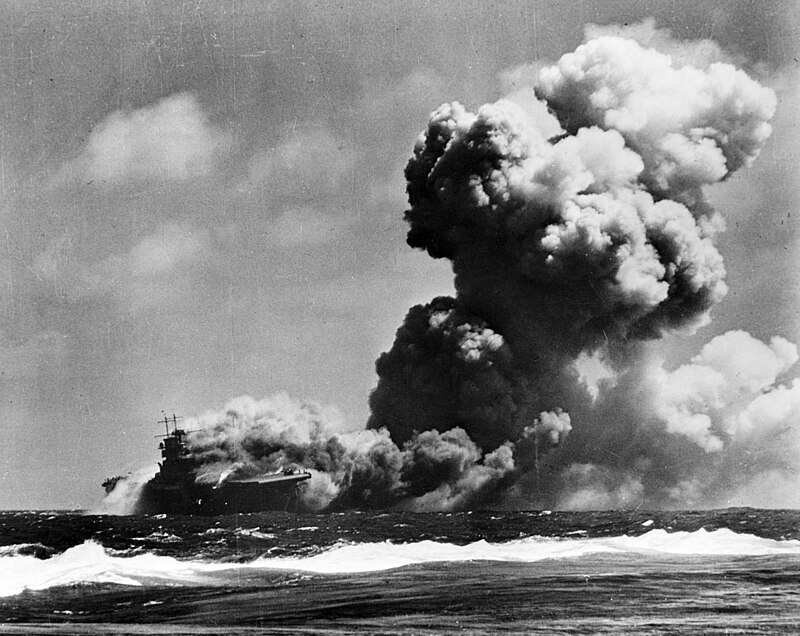 In regard to the torpedo fails, History Buffs has a video on Midway. Here the narrator explain that the USN torpedoes kept failing until 1943. He also adresses why they failed.