(Extract the zip archive into your "Mods" directory so a folder named "II" is created. You can then select the mod from the DH launcher.)​

This is a mod I've been working on sporadically for the last couple of years and it's still not quite finished, but hey, here we go! Eventually I'll port this mod to the E3 map once provinces won't be changed anymore, but until then II will be using the boring ol' HoI2 map, as it was originally a DDA mod. 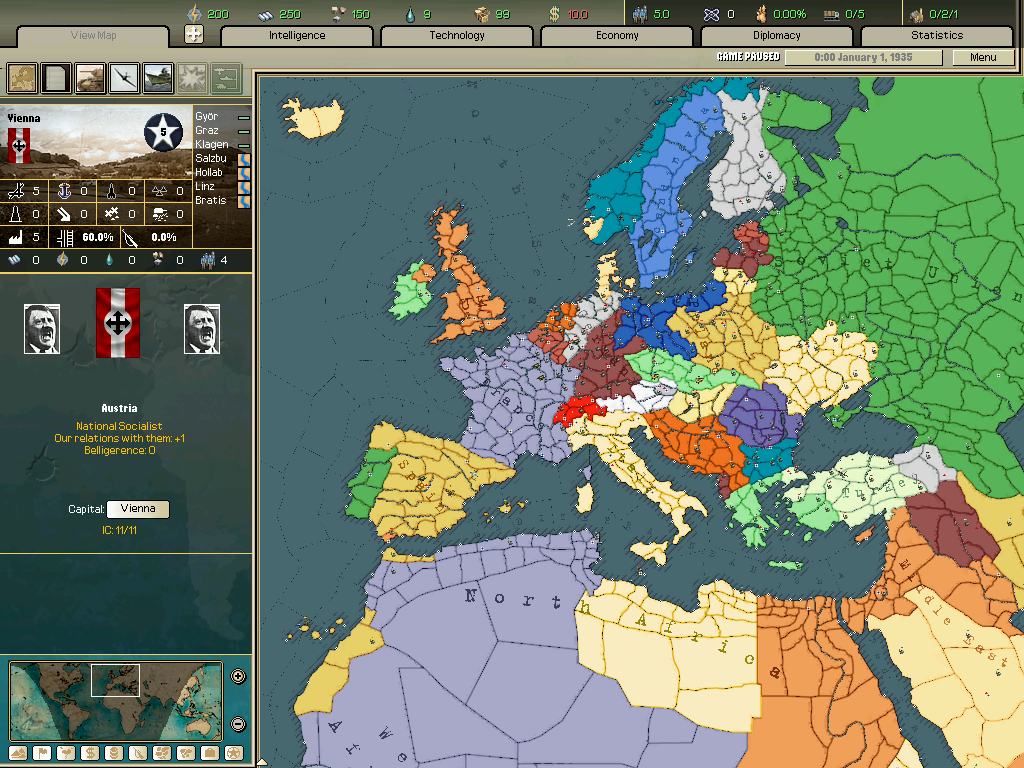 With that out of the way, let's get into what Irredentism & Imperialism is. As the name suggests, it's an alternate history mod that revolves around empire-building and countries returning to former glory. In a way, playing II feels a lot like playing EU, as there are many alliances, few railroading events, and no scripted world wars. The political landscape changes a lot over the course of 10 years, and games can turn out extremely different. This is not merely random; rather there are multiple parallel developments that interact with each other. For a simple example, a quicker resolution of the Chinese Civil War may cause AI Japan to expand into Korea and Taiwan more quickly in return and to seek powerful allies to counter the perceived Chinese threat. There are also plenty of opportunities to start global conflicts, but without an aggressive human player the AI usually won't do so for quite some time, and while there are tons of local conflicts (and I mean TONS) they mostly stay local.


A short list of the most important timeline divergences:
And now for some more screenshots: 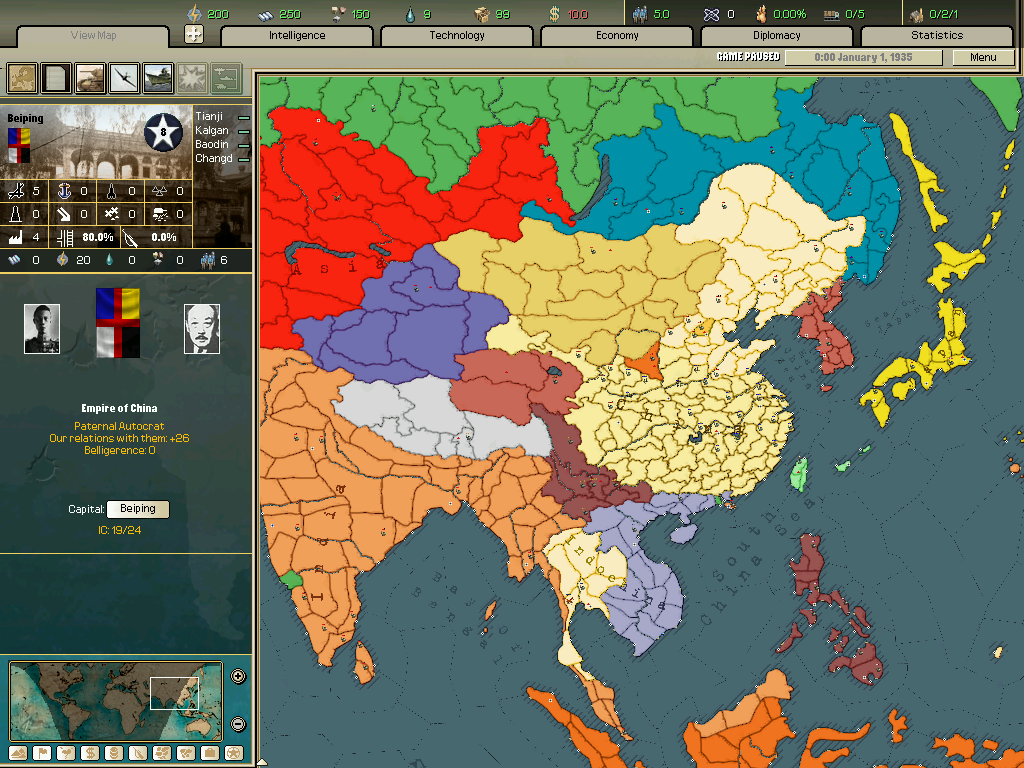 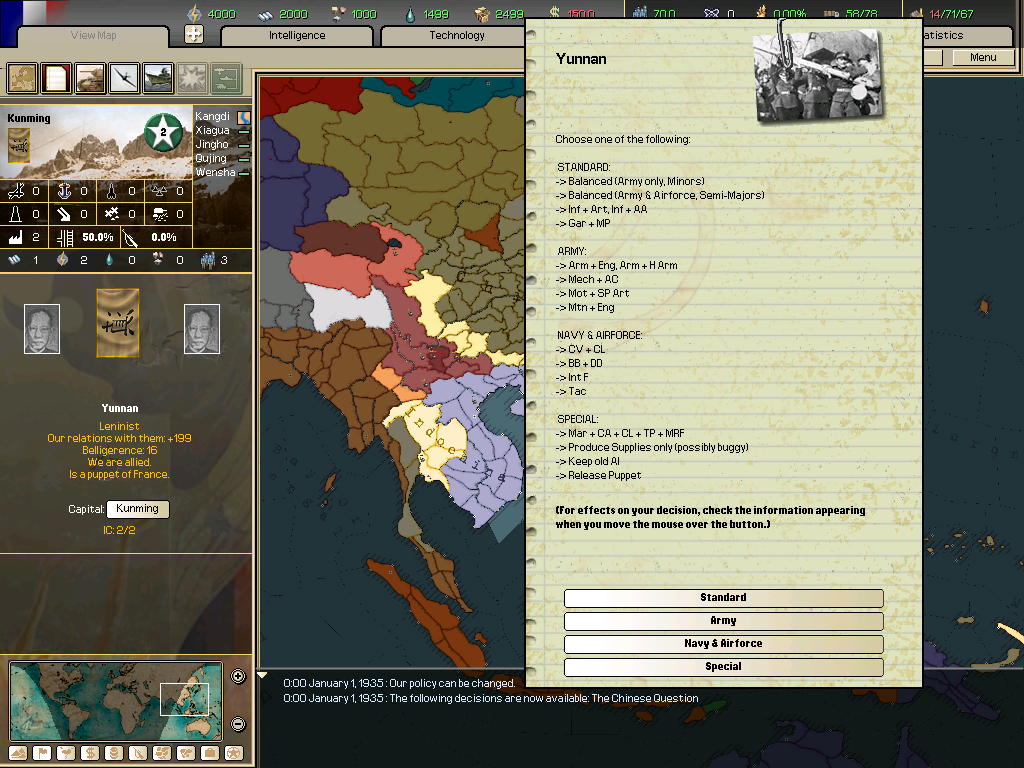 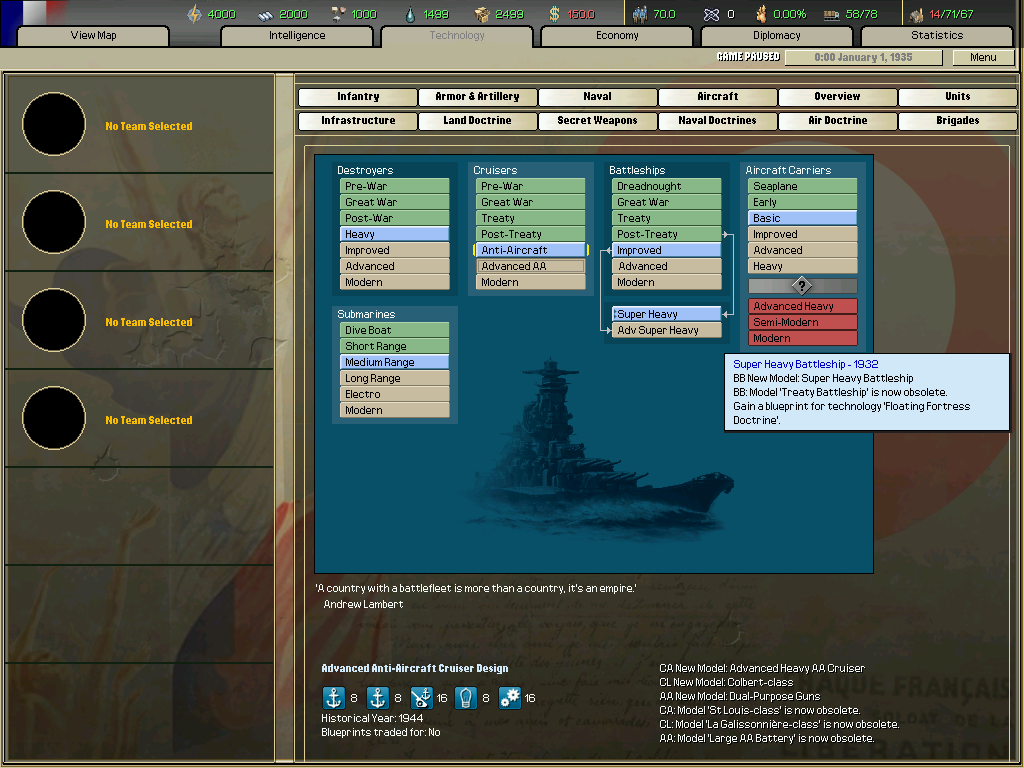 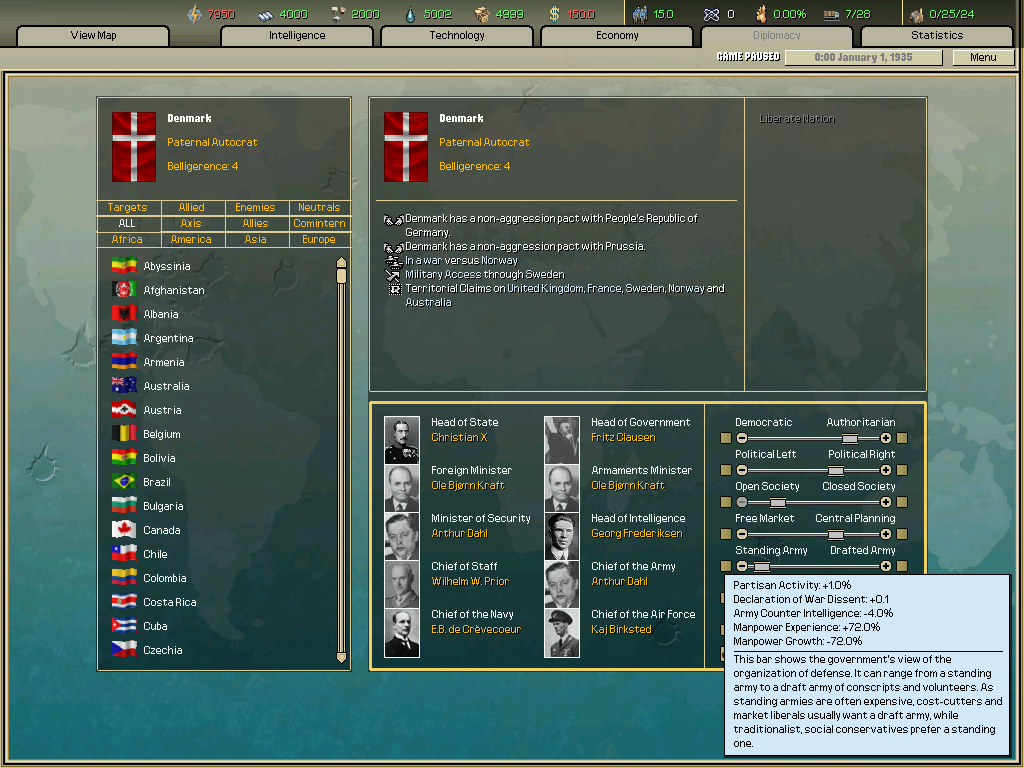 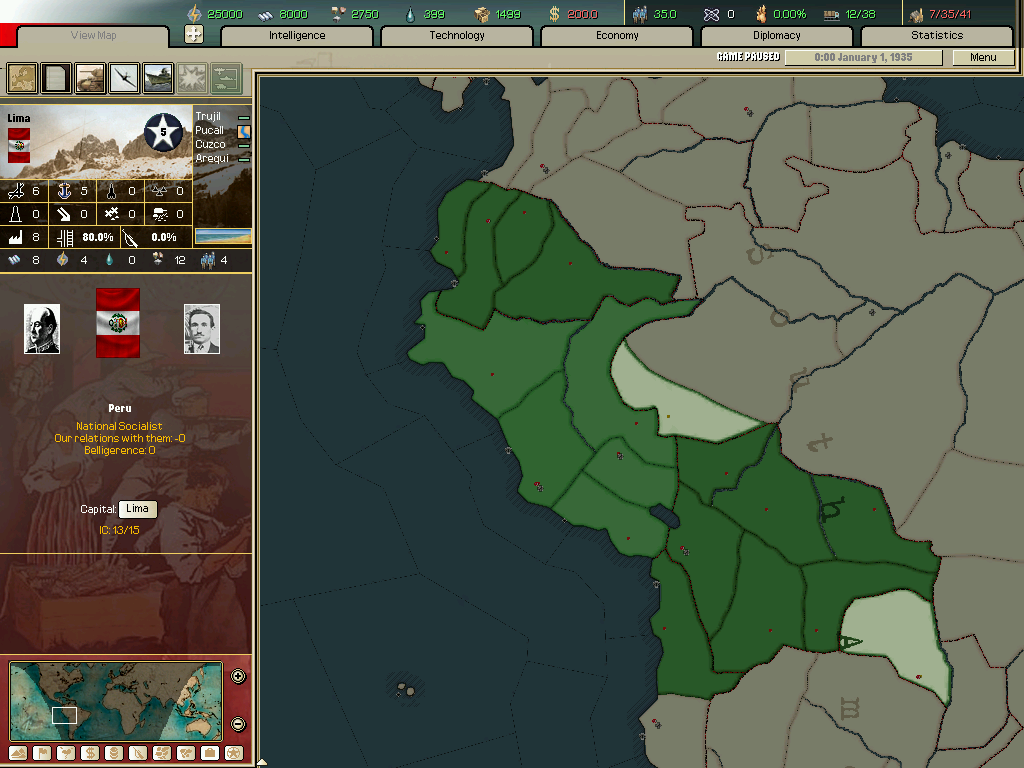 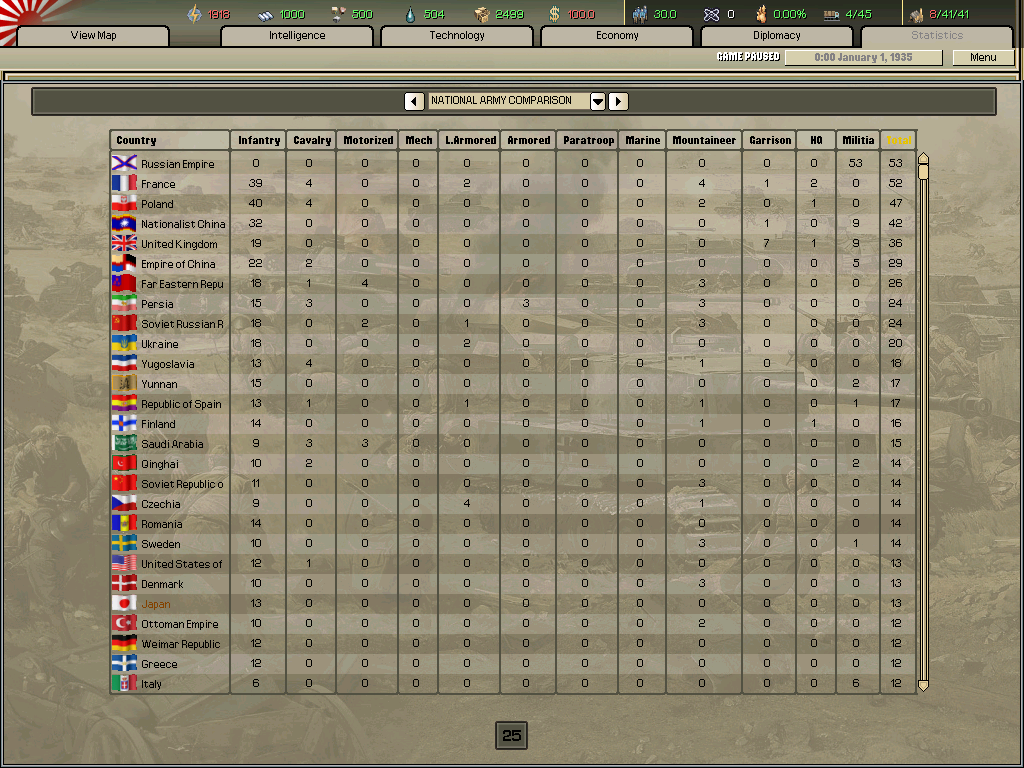 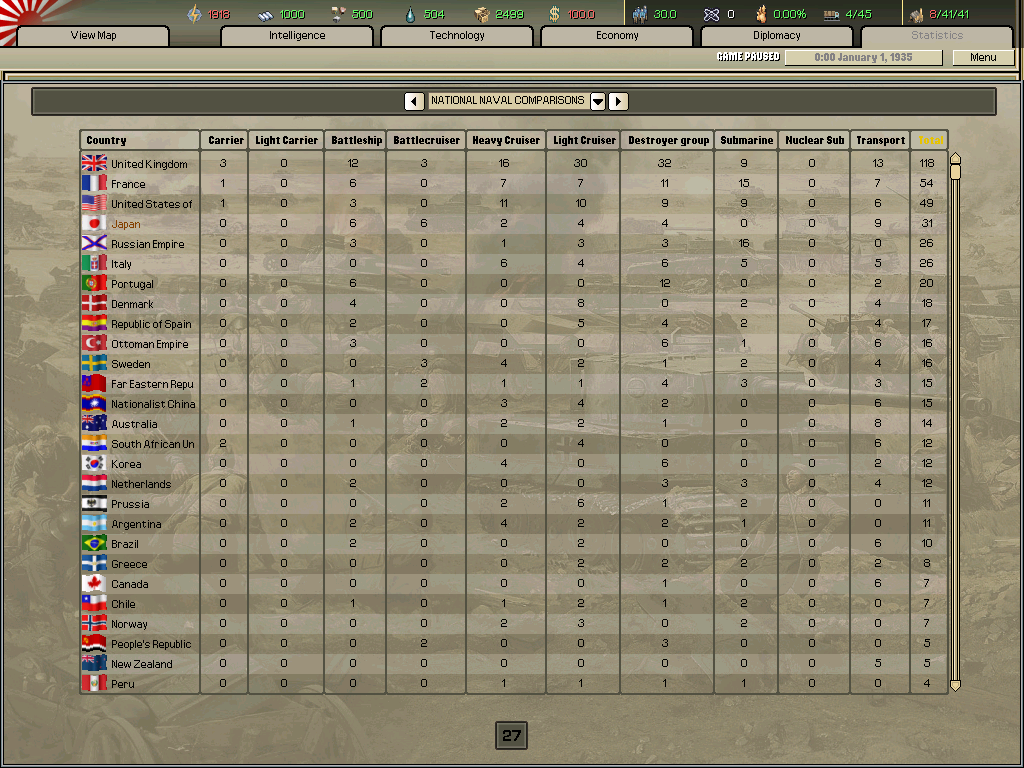 Gameplay changes and features:
The mod isn't 100% finished as apart from intelligence there are also still some event descriptions missing, but the names and effects should tell you all you need to know. Country descriptions also still use the DH default texts and I probably won't update them until I begin porting the whole mod to the E3 map. If someone likes to write those kinds of texts, please send me a PM!


Countries that are the most fun to play: 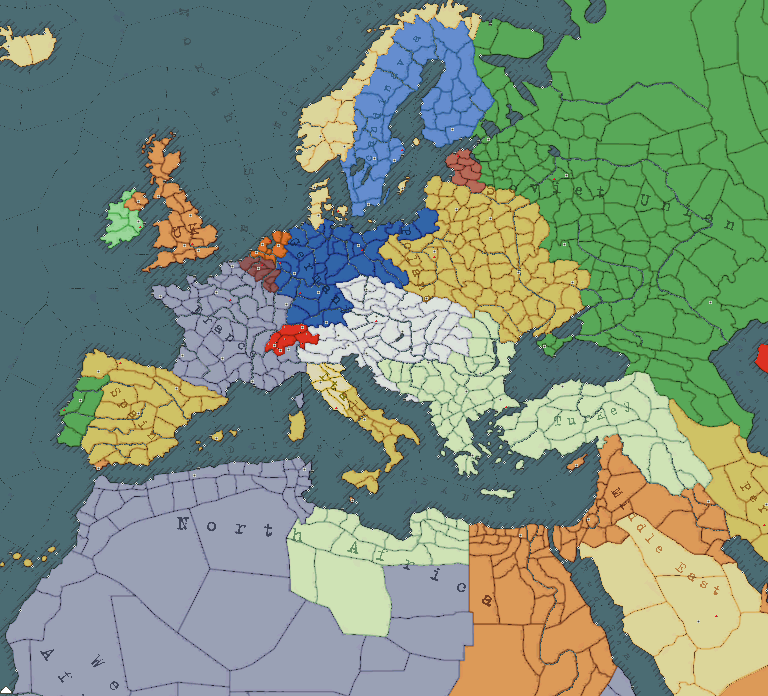 ** These are tons of AI events to check when AI puppets are created and could theoretically slow down the game. However, even on the oldest machine I own (~1.8 GHz) I was unable to observe any difference without throttling the CPU.


Big props go to guy_montag for converting all the flags I made way back in the HoI2 days to the DH style and also for doing the counters.

Might give it a try whenever I get some time
Toggle signature
Best Regards,
Marshall18​

Intersting,but those provinces....I hate it can you please make the original DH provinces?

Im very interested in the mod, im surprised your using old HOI2 provinces and not DH

Hahah amazing of you to keep the mod to yourself for all these years and to release it only after it's almost finished. More modders should be like you
Last edited: Sep 18, 2013

how to install? do u need to copy dh full or do u just put this in your mods folder by itself?

When extracting the zip archive you'll see a folder called "II", just drop that folder into the "Mods" directory of your DH installation. No other actions are required; I should probably make this clear in the OP...

Ruostenyrkki said:
Hahah amazing of you to keep the mod to yourself for all these years and to release it only after it's almost finished. More modders should be like you
Click to expand...

Actually this mod was released (under a different name) for HoI2 back in... 2009? 2010? Something like that. Of course it has changed a lot since.

Mizz2 said:
Intersting,but those provinces....I hate it can you please make the original DH provinces?
Click to expand...

I was expecting those kinds of posts. See, I'm not going to port this first to the DH map and then to the E3 map as well. And if II was using the DH map you'd now be telling me to update it to the E3 map, right? Right.

It's not just a matter of updating province IDs, but also of converting all the changes I made to the map itself, like resources, IC, manpower, infrastructure, terrain, even connections. A year ago when I began porting II to DH and was posting here to look for some hands to help with that, no one volunteered for the map conversion work. I had more important things to work on then, and I still do as II is not completely finished.
Last edited: Sep 19, 2013
Toggle signature
Irredentism & Imperialism for DH 1.03
Watkabaoi fixed and updated for FtG 1.2
Watkabaoifbaaaaaa for FtG 1.3 beta
Jamie's Validator updated for FtG 1.3 beta
Event Validator for DH 1.03 based on Jamie's Validator
Interregnum fixed and ported to FtG 1.3 beta

Maybe you should change the research efficiency. It takes forever to research technologies, even if they're outdated, at the current

Right, I completely forgot mentioning this in the OP! Research times have been increased to balance the also increased number of tech team slots, the reduced amount of techs, tech team take over, and the modified historical dates (they tend to be further apart). Unless you have at least 6 tech team slots with good tech teams, staying on top of everything is pretty much impossible and you will be forced to specialize. You can see this clearly in the naval doctrines tech tree where there are parallel non-exclusive branches, but most countries start with modern techs in only one branch and would need quite a while to research the "older" techs in the other branch as well. This is fully intended behavior, and there is no post-historical date modifier at all.
Toggle signature
Irredentism & Imperialism for DH 1.03
Watkabaoi fixed and updated for FtG 1.2
Watkabaoifbaaaaaa for FtG 1.3 beta
Jamie's Validator updated for FtG 1.3 beta
Event Validator for DH 1.03 based on Jamie's Validator
Interregnum fixed and ported to FtG 1.3 beta

I understand this but most of the nations can only afford 2-3 techteams even after annexing neighboring countries.

I guess that if the Chinese Empire is Under Pu Yi administration,must use the Qing Flag:

Just downloaded this, looking forward to giving it a try.

I think I'll wait until you go EU3 on this, but it's nice to see some new mods, this one looks fantastic and I'll give it a crack in the very near future.
Toggle signature
Australia, a Nation Worth Fighting For. 1914-1963
http://forum.paradoxplaza.com/forum...stralia-A-Nation-Worth-Fighting-For-1914-1963

Want a new twist on all those DH events? Come take a look-see...
http://forum.paradoxplaza.com/forum/showthread.php?743990-Added-flavour.-No-MSG

great to see what looks like a very fun mod for DH lite. I personally prefer the old map...

This looks really sweet. I'll give it a shot.
Toggle signature
The Hungarian Improvements Project - Irredentism and Pálinka.

EmprorCoopinius said:
Just downloaded this, looking forward to giving it a try.
EDIT: Game installs and starts fine but crashes 2-3 days in. Confirmed with USA, Peru and Austria.
Click to expand...

Can't reproduce this at all. Both the built-in validation and the event validator report no errors except those that are there by design (and aren't actual errors). Did you make sure the checksum is correct? Any graphics missing? My guess is that either you have modified vanilla DH in a way that interacts with II, or that your download was corrupted.
Toggle signature
Irredentism & Imperialism for DH 1.03
Watkabaoi fixed and updated for FtG 1.2
Watkabaoifbaaaaaa for FtG 1.3 beta
Jamie's Validator updated for FtG 1.3 beta
Event Validator for DH 1.03 based on Jamie's Validator
Interregnum fixed and ported to FtG 1.3 beta