Welcome
Hello everyone, this is my third HOI3 AAR and the only one where I'm not expecting instant failure!

I am English, and therefore, I know very little about Ireland and their history, except what I can gather from wikipedia, Paradox games and a hint of imagination. If I do make a mistake, you might be the only one that notices it so keep your mouth shut!

I will be playing with For The Motherland with Common Weapons and the sprite packs.

Note: I started this game in 1936 and I... er.... cheated.... a little which is why Ireland is a little more powerful then normal. This AAR is meant to be comedy.

Chapter One - The World At War, Probably

Ireland in 1936 was little more then the laughing stock of Europe. Having split from Britain in 1922, its army was still weak and it had barely made a name for itself. However, after 1936, it went through a great period in its history, Ireland's army had grown to a large size; it's industry, increased; their reputation, great.

The world in the 30s was quite unstable, the politics in eastern Europe weren't exactly friendly to the west. Ireland's great spies performed a large number of coups, in Latvia, Yugoslavia and most importantly in Austria. It was quite apparent that Germany had had its eye on Austria since the end of World War One, and a friendly political party who definitely result in a union.

Another famous coup, though not successful was the Spanish Civil War, which started in 1938. It was a German spy who attempted to overthrow the government which was a spark on an oil rig for two big factions to fight it out: the Republicans and the Nationalists.

In mid 1939, Ireland, with the Allied help of the UK (and a bit of France), managed to defeat first the Nationalists then the Republicans and Ireland profited greatly from this pointless war. Ireland got the majority of Spain whilst the UK managed to get a few pieces of land in the center.

Later on in late '39 and early 1940, the Irish once again expanded their empire into Saudi Arabia to control the valuable oil reserves.

Meanwhile, in the East, Japan attacked China in 1937 and has quickly expanded from Manchuria southwards towards the broken Kingdoms. Now however, having annexed Shanxi, Xibei and the Communists, Japan is facing trouble against the much more powerful Nationalists.

The state of the Japanese Empire in 1940

Back in the west, Germany felt like invading a small country and whilst the Allies were busy in Spain, they entered Switzerland which fell in just a couple weeks. Then on 1st September 1939, they demanded the region of Danzig from Poland. The Poles refused and they got attacked.

In 1940, with Poland annexed, Hitler's Third Reich turned their eyes towards Czechoslovakia. In May and June, 1940, Czechoslovakia was invaded.

But the fire was still not out, the United Kingdom on behalf of the allies demanded Germany released Czechoslovakia as a free nation or face war. They chose war.

Europe had changed in less then 5 years in more ways then one can imagine.

Less then a day after Stalin of the Soviet Russia heard this, they declared war.

Well this is pleasant.

Europe was now about to face the biggest war mankind had ever seen.

Europe, June 14 1940
Toggle signature
"I'D RATHER DIE ON AN ADVENTURE THAN LIVE STANDING STILL"
- VE SCHWAB

A really fascinating idea for an AAR; I'm eager to see where you go with this!
Toggle signature
Let's Learn Victoria 2 with Professor von Bismarck -- Episodes Tuesday and Thursday
Like what you see? Check out my Inkwell for awards and completed AARs!

The Ottoman Rebirth - Ended due to save fail

Chapter Two - The Military Overview
Since 1936, the military of Ireland has expanded 10 fold what it was*, 504'000 Irish men across the small country. This was surprising to other nations of the world, considering that the population was little over 4 million.

In the past few years, Ireland, despite being an Island nation, has expanded its Army more than anything else. This is due to the fact that Great Britain, being an ally, has an expansive Naval and Air military.

The army is split into three armies: the Home, the Colonial and the Invasion. The Invasion Army is saturated with Corps' whereas the others are rather empty. Eh... Just look at this picture:

A diagram showing the order of battle. It shows the name of each theater and how many troops it holds.

However, the Air and Naval military was not left alone. Ireland has a medium sized Air Force. The IAF consists of:

So as you can see, the IAF is mainly made up of long range aircraft. They are all based in Ireland (with the CAGs obviously, in the Carriers) and all are prepared for the Second Great War.

Now for the Navy:

Somone taking 2. Submarine for a spin round the rock

The Navy mainly consists of submarines; six of the submarine fleets are in Ireland whilst the other two are based in Arabia, as is one of the transport fleets. The Royal Fleet is made up of: two carriers (and their CAGs),2 Battleships and 4 destroyers.

But all-in-all, the Irish Navy was mainly designed for getting the army to the mainland, and thats it.

Nothing is based in Spain. If the worst comes to the worst, Spain can be released as a puppet and they can fight the war themselves.

A look at France
The Maginot was going to be the main place of battle if the war was going to come. But since Germany invaded Switzerland, south of the line is exposed to German lands. Hopefully, the majority of the German army will still be in Czechoslovakia or fighting of Ruskies to bother defending from us.

Avindian said:
A really fascinating idea for an AAR; I'm eager to see where you go with this!
Click to expand...

Thank you I don't really know myself. I might try holding them off in Spain or sending a big ass invasion force to Kiel, or maybe just see if they fall under the pressure of a two way war.


eqqman said:
I've seen enough of the Leprechaun movies to know it doesn't look good for the Germans.
Click to expand...

#high five# I was surprised as well actually. But smart AI for doing Tannenbuam.

Next update (three that is) probably mid week.
Toggle signature
"I'D RATHER DIE ON AN ADVENTURE THAN LIVE STANDING STILL"
- VE SCHWAB

That is a weird map!
Germany is the only axis power in Europe so?
Toggle signature
no more unfinished IN AAR's

How is your IC & manpower doing? considering your army and navy..

sprites said:
That is a weird map!
Germany is the only axis power in Europe so?
Click to expand...

Germany and Japan and its puppets are currently the only Axis powers. However, there are numerous nations drifting towards them unfortunately.


Wallienator said:
How is your IC & manpower doing? considering your army and navy..
Click to expand...

Like I said.... I cheated a little
Toggle signature
"I'D RATHER DIE ON AN ADVENTURE THAN LIVE STANDING STILL"
- VE SCHWAB

Chapter Three - The First Missile
The war kicked off and the entirety of the navy was sent into a frenzy of convoy raiding. All over the empire, submarine divisions were strategically ordered to patrol the seas. Also, the 2. Marine division was sent back to Ireland from Arabia, they were originally there for a poteintial war against Persia but World War II got in the way of that.

The 2. Marine Corps on the transport back to Ireland.

Meanwhile, on the eastern front, Soviet Russia has declared the war a great emergency and has urged all people of Russia to come to the front lines against the Germans. 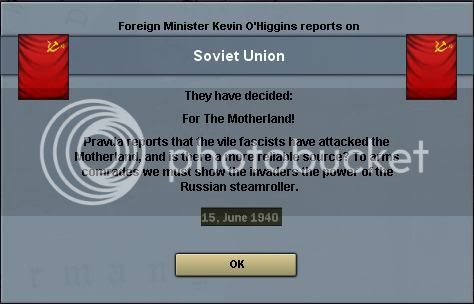 The message from the government of Russia

Although France seemed to be handling itself pretty well, you must always expect the unexpected. Therefore, the Atlantic wall corps was rebased to Spain, and, as well as that, 10 Cavalry divisions were put into production as a basic defense.

Despite the army being rather dormant, the navy was busy sinking covoys heading to Germany, and also, rather surprisingly, to Japan as well. Japan was also at war with both the Allies and the Russians.

The situation in Japan and Manchuria. Britain has not offered China to join the Allies, despite the situation.

After nearly twenty days of fighting, the government of Ireland was seriously considering releasing Spain as a puppet so to give them a chance to prepare them for their ultimate showdown with Germany. The line at France was broken, and although the French were pushing from the south through Switzerland, it seemed unlikely that that would last.

However, a new threat was becoming apparent. Portugal was drifting closer and closer to the Axis powers and it was giving Germany access to valuable Tungsten which would boost the German economy. As a result of this, the Irish government drew up a plan to take Portugal and their valuable economy.

As the Marines took their positions, news from Germany arrived. The papers have labeled this war as Germanys "destiny". A nice morale increaser for the German people but it doesn't seem to be changing anything.

The Marines, prepared as they would ever be, took their positions in the landing craft. However, as the plan came under one last revision, it was decided the war on Portugal would not go ahead. Britain had started influencing Portugal away from the Axis but most importantly, it was decided that Portugal's Colonies would be alot of hassle for Ireland to conquer.

The Operation was called off until troops could arrive in Spain and the marines could target their energy to Angola.

Portuguese Colonies: Angola (with the main cities) and Mozambique.
Toggle signature
"I'D RATHER DIE ON AN ADVENTURE THAN LIVE STANDING STILL"
- VE SCHWAB

Followed, or is this dead yet?

Hearth said:
Followed, or is this dead yet?
Click to expand...

Possibly. Ive got a lot of exams this and next week so I've been revising like crap and there has been not much time for games Sorry
Toggle signature
"I'D RATHER DIE ON AN ADVENTURE THAN LIVE STANDING STILL"
- VE SCHWAB