Menu
Install the app
You are using an out of date browser. It may not display this or other websites correctly.
You should upgrade or use an alternative browser.
Crusader Kings III 10367 Open Beta Feedback (1.3.2) 12 Bug Report 6314 Tech Support 704 Multiplayer 76 User Mods 900 After Action Reports (AAR) 127 Suggestions 2379

I think Varangian Adventures are more OP than the Kingdom of Mann. Here I'll make some suggestions on how to improve it, and I'll reply in a moment with the story of my current run, to give insights into how I've comme to this conclusion.

Suggestions on how to improve on the mechanic

I would suggest that when you launch a Varangian Adventure, the following happens :

- you need to be at peace to use the CB

- your domain troops + your special event troops are all raised instantly

- you choose if you want to bring your heirs with you, or if you want to leave them all behind. Any landed independant heir cannot follow you. Any heir that doesn't like you will choose not to follow you either way. Heirs staying in Scandinavia for either reason inherit all your lands following the succesion laws in place, so presumably Forced Partition, and after inheriting, are then considered disinherited from then on. So they won't get your indian land when you die - the sons that left with you will, or those that you made along the way

- the rest of you go off on an Advendure, but lose all conection to Scandinavia. Just as the ones who stay behind lose all claim to your future endeavours, you lose claims to all you leave behind

- your titles being forfeit, you become an unlanded character with a Duchy title with no De Jure titles below it, exactly like the Northern armies that pop-up from time to time, as explained in the last Dev Diary. Once you've finished your conquest, this title is destroyed, and you get the one you used the CB on.


You could still bring your lineage back to Scandinavia, but not by cheesing the inheritance mechanic, or by starting first the Varangian Adventure and then a small war for a OPM in Scandinavia, to get the best of both worlds. So still a very strong starting game, but with a real drawback, whereas as things stand today, there are none. As we'll see below...
Toggle signature
CKIII Suggestions :
Organic Feudal Crown Authority
Army Composition / Armies outliner / Army management / Knights & Commanders
Culture conversion
Ruler Designer - Chose your Inheritance Law at game start
Improving on Varangian Adventures
Prisoners of war
Reactions:
Upvote 0 Downvote

I started as Fairhair, quickly conquered the Jarldom of Vikin.
Got Egdafylki, granted it to my uncle from my dynasty. Did the same with Gulapingslog for my heir, Vastergotland for my 2nd born, Smaland for my 3rd born. With 5 indendant Dukes from my Dynasty, that's 2.5 Renown per month, and the 1st legacy unlocks at 250 renown. Of course I allied each of my sons, so even though I gave them crappy land with low control and they were pretty weak, I had no problem repelling the couple of attacks made on their land, and even farmed some prestige out of it.

So that was me in 882, 6 months before I unlocked Wanderlust : a web of allied Duchies of my Dynasty, maxed MAA and still Prestige to spare, with enough to launch 2 consecutive Varangian Adventures, no problem. 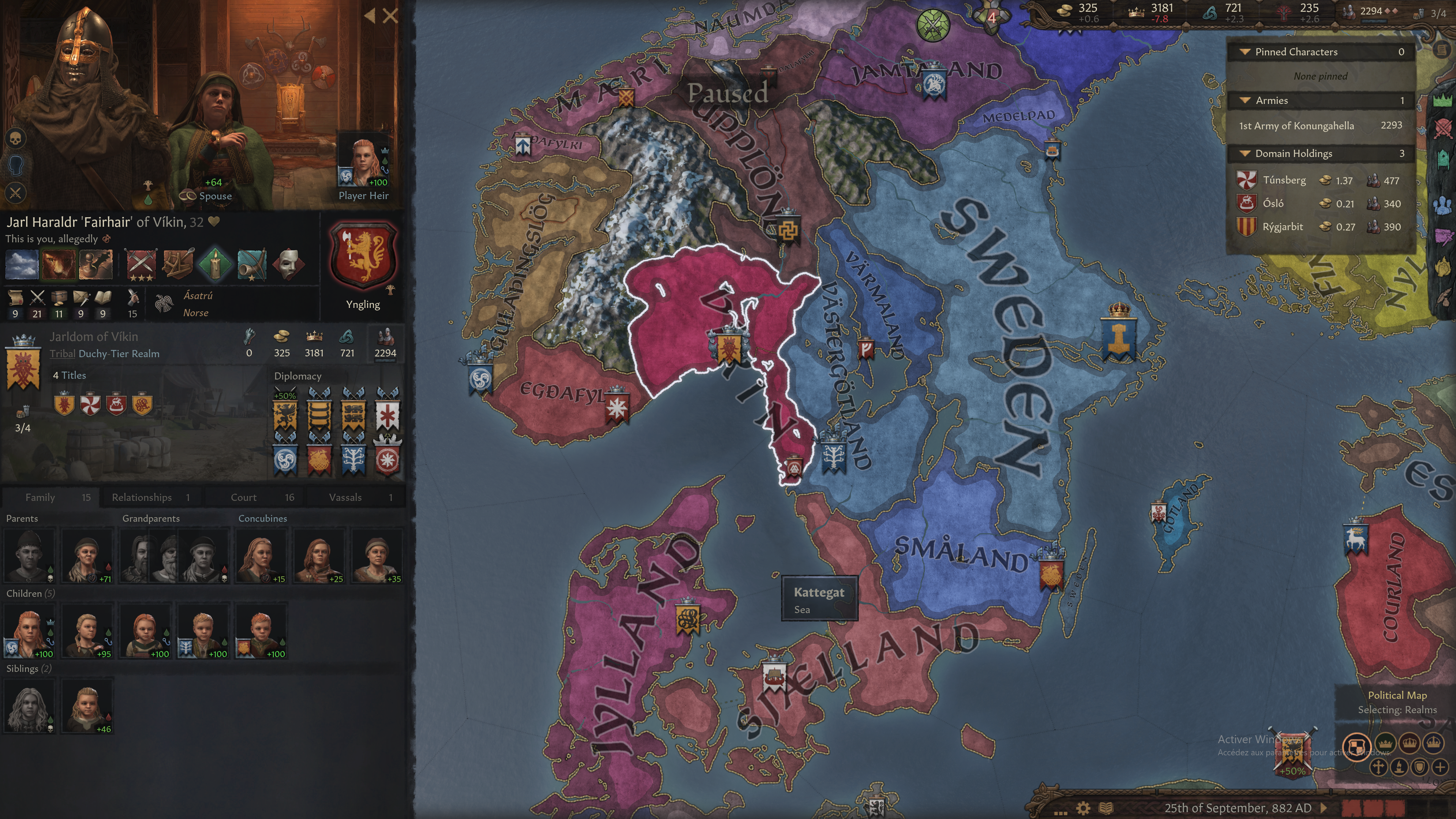 With the bonus to diplo range from Wanderlust, I could set off for an Adventure in Khazaria. The western most border was within range, but of course I went for the eastern most territory : Ciscaucasia. That was a pretty big 1st leap. That's where I started running into some funny issues : my son and ward was out of diplo range, but I still got events for his upbringing. One of my concubine, being mother of a landed son, stayed at his court, and I couldn't dismiss her anymore. But the powerful thing is, I was still allied to my sons, couldn't get called into their wars, but I'm pretty sure I was still a deterent against attacks on them. None of my sons could field more than 500 troops, when Sweden had several thousands, and still, they didn't get attacked, appart from the occasional peasant uprising. Peace and stability in Scandinavia, thanks to my 1500 Jomsvikingr and 3000 Viking Adventurers way back east.

So I then launched my 2nd Varangian Adventure, and set off for the Jarldom of Sauvira. I just had time to raid a couple of duchies in India before I died of a botched treatment of pneumonia, in 892. And my sons in Scandinavia inherited my territory. So I am now Jarl Halfdan Haraldrsson of Gulapingslog, Tribal leader, with my realm capital in Siwistan.
I've got almost 7000 troops, we'll see in detail in a moment what they are comprised of, and how they fare on the battlefield.

I've got loads of cash, so I'm hiring Gujarati mercenaries in Scandinavia to take some territory and build back up to 10 counties, which will give me 3000 Viking Adventurers again when I launch my 1st Varangian Adventure as Halfdan. Before I attack in Scandinavia, I raise my own troops back east raiding in India, so I'm doing both at the same time. Now I haven't been very efficient, so it's 10 years later, and I'm about ready to go on an Adventure. But I've already converted one 12 dev county in India to Norse, I think I'll stick around and convert the other 2 I've got before I let them go. Meanwhile, I start raiding the Pratihara Kingdom, which has more than 5k troops, about the same as me. But when we clash in battle, this happens : 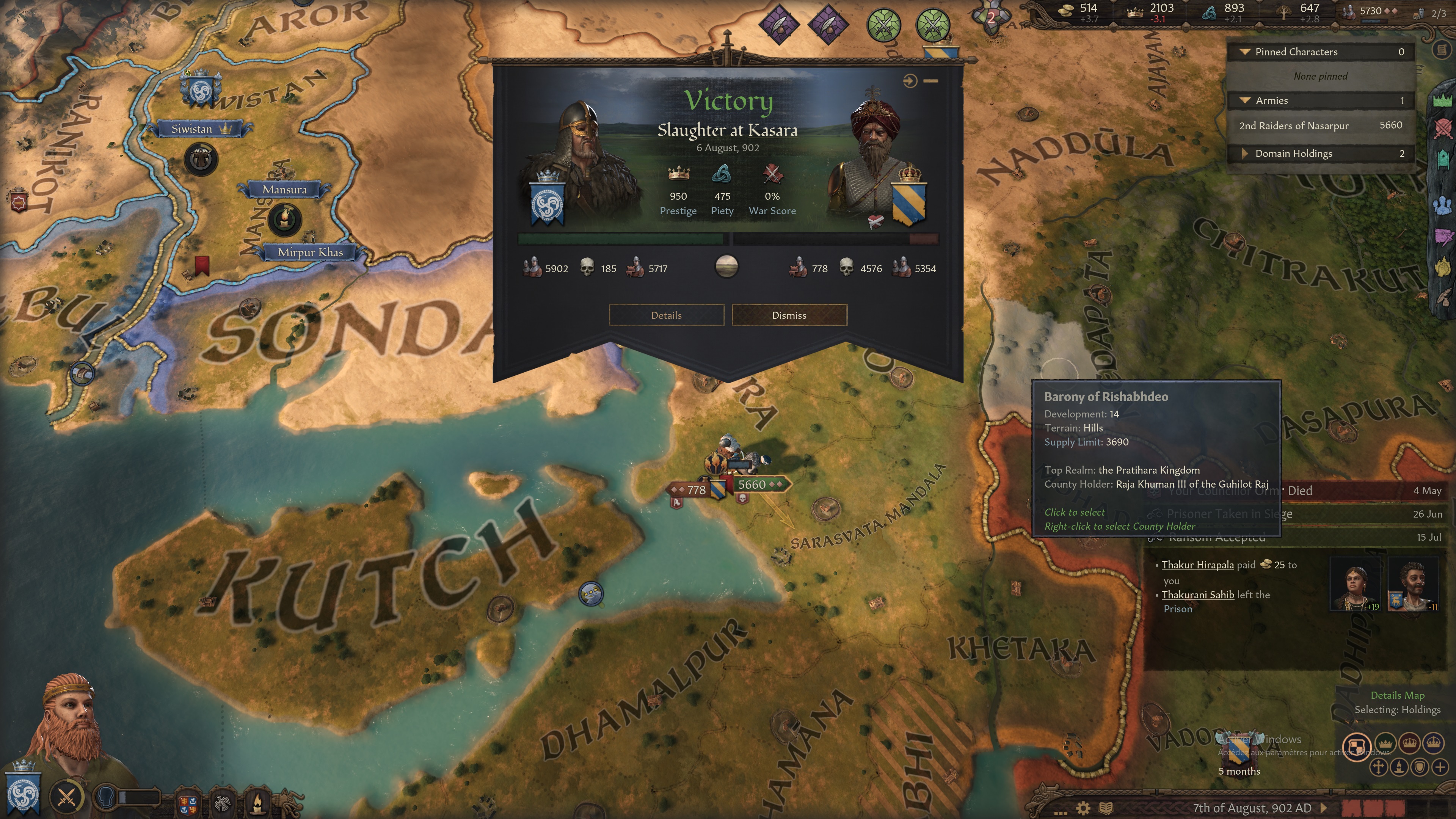 The difference is, my 6000 troops are 1000 levies and 5000 MAA : 2000 are my own, and 3000 are Viking Adventurers and Jomsvikingr that I don't even have to pay maintenance for. I've still got that many, from troops spawned by my father 15 years ago because I mostly don't fight with them. They stand next to my domain troops and MAA who are doing the heavy lifting, so my troop count doesn't dwindle over time. And the second I launch my next Varangian Adventure, I get another 200 levies and 2800 free MAA, because I've consolidated back to 10 counties in Scandinavia.

And I'm still racking up quite a bit of renown, so in 3 years I can unlock the 1st Pillage legacy. Snowball incoming...
In a second, I'll be declaring my 2nd and last Varangian Adventure with Halfdan, and while at war, I'll grant Jarldoms and independance to 3 heirs in Scandinavia, so that'll net us +4 renown for 8 Dukes, so the same as an Emperor if I'm not mistaken.

So it's really fun, don't get me wrong, but it's also wildly imbalanced. And while the Kingdom of Mann was voluntarily so, I'm not sure it was intended this way for Varangian Adventure. They're supposed to give you the tools for a strong fun start wherever you want, but the loopholes in the system are plenty.
Toggle signature
CKIII Suggestions :
Organic Feudal Crown Authority
Army Composition / Armies outliner / Army management / Knights & Commanders
Culture conversion
Ruler Designer - Chose your Inheritance Law at game start
Improving on Varangian Adventures
Prisoners of war
Reactions:

Hey seem like a wild ride maybe what they need ti nerf is inheriting those special troop I guess, like make it dissolve after you die.
Reactions:

I've also discovered that your raiding parties only take attrition while they're actively raiding on the monthly tick. So you can really carry them over for a long time indeed, and still raid much stronger countries.

I started a new game to see how many troops I can accumulate while Varangian Adventures are available, by trying to have as many successions as I can. Started as Ivar for his 5k starting troops as well, got back to Scandinavia to get 10 counties. Then my oldest son died, leaving 2 sons behind. So I launched my adventure across the Baltic, granted 10 counties + a jarldom to my grandson so he'd get independance, ended the war, got my stress high real fast by liberating prisoners as he was callous, and voilà.

1st adventure in 878, 2nd adventure as the grandson heir in 882, so I'm at 10k troops already, 400 MAA I pay for, and the rest are free levies + MAA. I agravated my uncle and put him as Spymaster. He's 2nd in line to inherit, let's see how fast he can kill me, so my kid brother can inherit. While I'm waiting to be killed, I'll try to take back some land in Scandinavia to speed things up.
Toggle signature
CKIII Suggestions :
Organic Feudal Crown Authority
Army Composition / Armies outliner / Army management / Knights & Commanders
Culture conversion
Ruler Designer - Chose your Inheritance Law at game start
Improving on Varangian Adventures
Prisoners of war
Reactions:
Show hidden low quality content
You must log in or register to reply here.
Share:
Facebook Twitter Reddit Tumblr WhatsApp Share Link
Top Bottom