Hello and welcome to today's Developer Diary for Imperator: Rome. This will be the first diary that touches on what we are planning for the Archimedes Update, which will primarily focus on Religion!


The most notable effect of religion in the released game as it stands is that it relates to which Omens are available to you. A wide range of different Omens with different effects exist spread out throughout the world, often relating to local deities or cults. In practice however you have no easy control over which Omens are available to you, and no way to influence your country’s policy against foreign religions.

In the Archimedes update this is changing, as are other aspects of how you deal with religions in the game.


Deities & the State Pantheon​
While most states took a more inclusive religious approach than in later eras Religion was still important in the ancient world. Often divines from multiple corners of an empire would all be honored by the central powers that be, increasing their legitimacy with their various subjects. Likewise empires where the ruling groups found themselves to be in the minority would often patronize local gods as well as their own.
Another thing that is quite striking in the world of the Hellenistic era is the sheer number of deities worshiped, even within the same vague religious sphere there are a great amount of different local deities which while they may resemble that of other places have their own peculiarities and modes of worship.
Some would in time be patronized by kingdoms and leading men, while others would continue to be the object of local cults in remote parts of the Mediterranean. 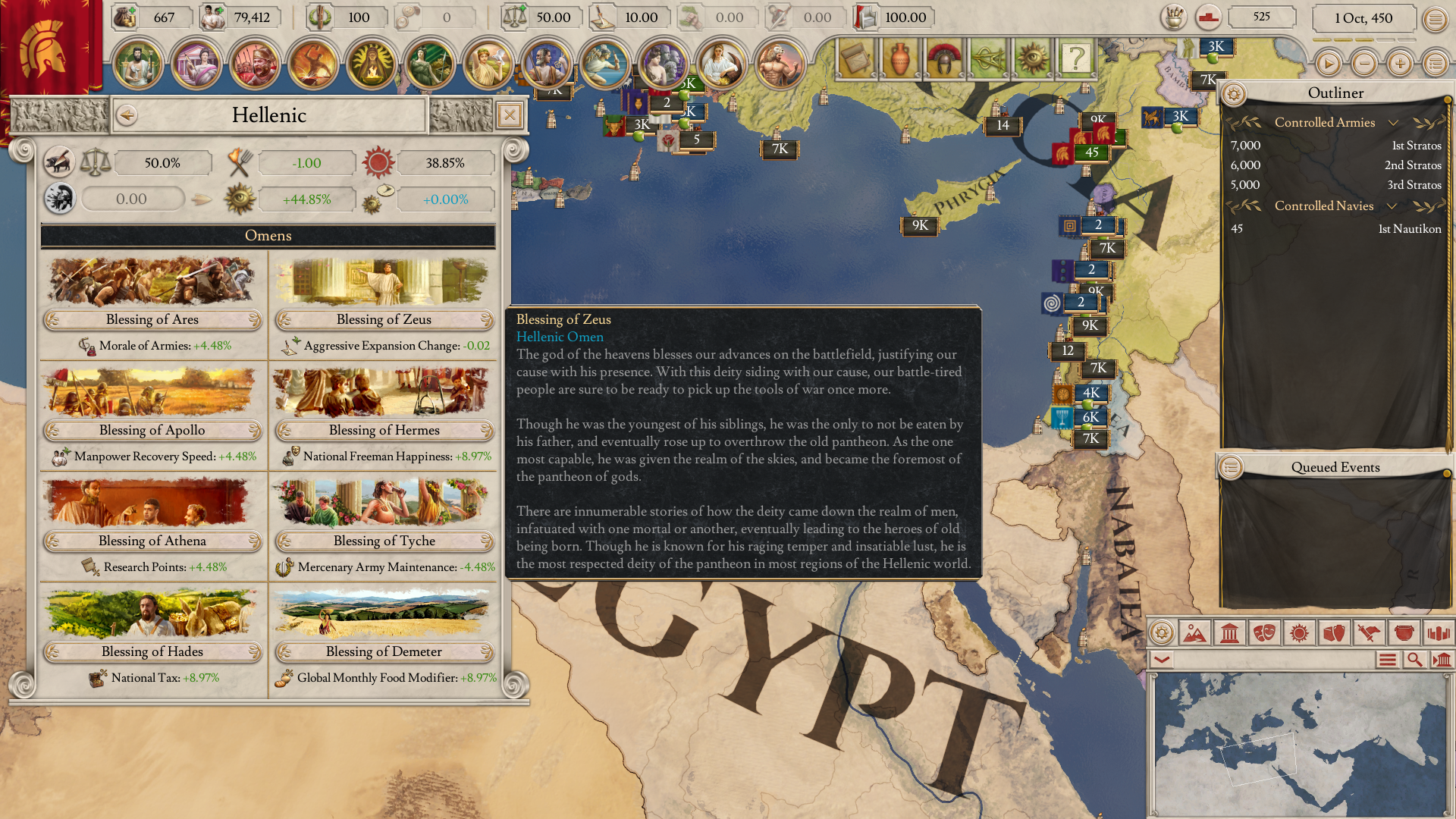 A picture of the current Omen View, while there is quite a bit of written flavor related to gods, the actual difference is small and you have no impact on which gods belong here.​
In the Archimedes update the old Omen system will be removed to give place for a system of Patron Deities. In a polytheistic religion the player will have power over which deities are considered patron deities in a State Pantheon, gaining access to different passive bonuses as well as time limited omens.

Religiously divided states will also be able to patronize deities from more than one religion, both placating the masses under their control and increasing their choice in deities.


Deities & Omens
​
Instead of having 8 Omens available to you at all times every country in the game will now have a State Pantheon consisting of 4 deities, each corresponding to one of 4 categories (Fertility, War, Culture or Economy).

While deities do belong to a religion it is not required that you follow that religion in order to pick a deity. Base happiness modifiers related to having or not having the state religion will go away in the Archimedes update. Instead all pops following any given religion will get a bonus to happiness based on how many of the deities in your state Pantheon matches the faith they believe in. This means that for a great empire syncretism, and selecting deities from many different religions, could be a way to promote stability and loyalty among your characters.

On the other hand if all of your deities come from the same religion then the pops of that particular religion will get a comparatively large happiness bonus under your rule.
Likewise loyalty and foreign relations are also affected by the religions of your chosen deities rather than your state religion as such.

Which deities are available to you will be based on your religion, and on the religion of your pops but also on things like geography. If you control the holy site of a particular local deity then that deity may become available to you as one of those you can patronize in your pantheon. The plan is that we will make a wide range of such deities available to you, offering ample choice both among the various fates and depending on where you are playing in the world.
Playing a small Phoenician state in Syria will have you picking between different deities than if you are on the Greek mainland, or among the Gallic states of northern Italy.

The Deities themselves will not all be the same however. Like before they will offer bonuses that are specific to the god itself. Every Deity will have both a bonus that you will always receive the benefits from as long as they are in your pantheon, and a time limited one that you pay to activate.

Taken together with the impact on pop happiness this should make the composition of your patronized Pantheon a strategic choice in the long as well as short term.

Replacing a deity in your pantheon for another of the same category (Warfare, Fertility, Economy or Culture) can be done as long as more than 3 years has passed since you picked your current deity. This comes at a price of a hit to the stability of your country. You will also not be able to make use of the Omen (time limited) bonus for a deity during these 3 years.

This deity rework is one that we hope will change the religion focus from always being one of conversion to allowing you to instead focus on syncretism. On the other hand a state with a very uniform group of pops under its control is likely better served by focusing on the gods of that religion. Since each “foreign” deity does eat into the possible happiness boost you could get from your state religion, there is no longer any inherent benefit to happiness from that compared to other religions.
Our intention is that this should bring the game closer in how you think about religion and worship to the real life states of the era, and that it will open up new ways to play.

The deity rework is also what enables many of the other things related to deity worship that we plan for this update, which we will expand upon in future diaries.


That was all for today. Sadly I do not have any screenshots to show you as of yet. We will be back next week to talk about some changes coming to the game’s characters.
Toggle signature
No fighting in here! This is the war room!


Trin Tragula said:
Base happiness modifiers related to having or not having the state religion will go away in the Archimedes update. Instead all pops following any given religion will get a bonus to happiness based on how many of the deities in your state Pantheon matches the faith they believe in
Click to expand...

oooh this is a bigger change than I was expecting, definitely a positive one too. I like that a lot.


Trin Tragula said:
Which deities are available to you will be based on your religion, and on the religion of your pops but also on things like geography. If you control the holy site of a particular local deity then that deity may become available to you as one of those you can patronize in your pantheon.
Click to expand...

That's going to make these holy sites a very high priority target if you have plans to conquer a specific region. Like Rome conquering Gaul will want those druidic sites so they can patronise a druidic god and get their new pops happier. Is there any way to see on the map, maybe a new mapmode, where these sites are?


Trin Tragula said:
Every Deity will have both a bonus that you will always receive the benefits from as long as they are in your pantheon, and a time limited one that you pay to activate.
Click to expand...

Curious as to what the cost is going to be?
Last edited: Jan 20, 2020
Toggle signature
I play Paradox games on youtube, check me out here if you like: Lord Lambert​
D

I was expecting more meat after month and a half desperate for new info. I can’t say if I like this or not until we know more. Looks cool but not exciting for the moment and I’m concerned about that it doesn’t look like this would add flavour for the nations.
Last edited: Jan 20, 2020

Okay, that's definitely much better than what we currently have.

Are the new omen effects just bigger buffs or are they going to be a bit more gameplay changing than the current ones?

The system sounds really cool, but what the game needs the most is tags that feel like they have a different playstyle than the last game you played.
Toggle signature
“And all those exclamation marks, you notice? Five? A sure sign of someone who wears his underpants on his head.”

Do you ever have plans to rework the pop types in imperator? I feel that pops could be expanded to be more than just 4 pop types, maybe there could be teachers, aristocrats or scholars etc.

How will these changes affect the current concept of a state religion and passive conversion? Is the future religious conversion based on the deities we choose?

Please tell me the Imperial Cult will have the ruler as the diety. That would be so cool.
Toggle signature
My mods: Fullscreen Barbershop for CK3, Better UI for Imperator, Elegant Galaxy for Stellaris
D

Long Game Short said:
Please tell me the Imperial Cult will have the ruler as the diety. That would be so cool.
Click to expand...

Doer of things and stuff in the videogame

Is the dev team fully focused on these Archimedes changes already or might we get an 1.3.x patch or hotfix in the few weeks ahead?

Even disregarding the bugs pertaining to performance and crashes, there is a pretty disruptive bugs atm, like citizen output bug affecting base unit costs.
… there's also so much low hanging fruit in terms of UI improvements you could make.
Toggle signature
Dormant AI-modder of Stellaris and Imperator.
Sometimes play games and talk at https://twitch.tv/tm_todie

Is Rome Worth one good game ? We believed it once. make us believe it again!

Long Game Short said:
Please tell me the Imperial Cult will have the ruler as the diety. That would be so cool.
Click to expand...

One word: Judaism.
Could you please elaborate on how Judaism will interact with these new mechanics?

Dsingis said:
One word: Judaism.
Could you please elaborate on how Judaism will interact with these new mechanics?
Click to expand...

Judaism will be elaborated upon in a later diary. It is not the main focus of this update but it is also not forgotten.
Toggle signature
No fighting in here! This is the war room!
D

Awesome! Any info coming on how things will work for Judaism and other monotheistic religions?

Edit: Looks like it got answered while I was typing, thanks for the answer!
Last edited: Jan 20, 2020
H

Dsingis said:
One word: Judaism.
Could you please elaborate on how Judaism will interact with these new mechanics?
Click to expand...