Jump to latest Follow Reply
Menu
Install the app
You are using an out of date browser. It may not display this or other websites correctly.
You should upgrade or use an alternative browser.
Imperator: Rome 8919 Bug Reports 3652 Suggestions 2389 User Mods 651 Tech Support 505 Multiplayer 56 After Action Report (AAR)
Show only dev responses

Hello and welcome to another Development Diary for the Imperator: Rome - Marius update.
Today I will be talking a bit about one of the bigger changes coming to warfare, and how you raise armies in the game.


Levies​
For most of the era covered by the game, the armies of Rome and other major powers were mostly composed of levies. In the Republics of the Greco-Roman world the levy system was in many ways the foundation of democracy, based on the idea that someone who fights for their city also has the right to vote. While this was a versatile and cheap way to ensure that large armies could be mustered rapidly, the lack of professional soldiers also meant that it was hard to specialize armies and even harder to garrison far away provinces.

In the Marius Update there are no longer any permanent armies at start in most of the world (there are exceptions, we will return to those). Instead troops are raised in time of need directly from the non-slave pops of your empire. 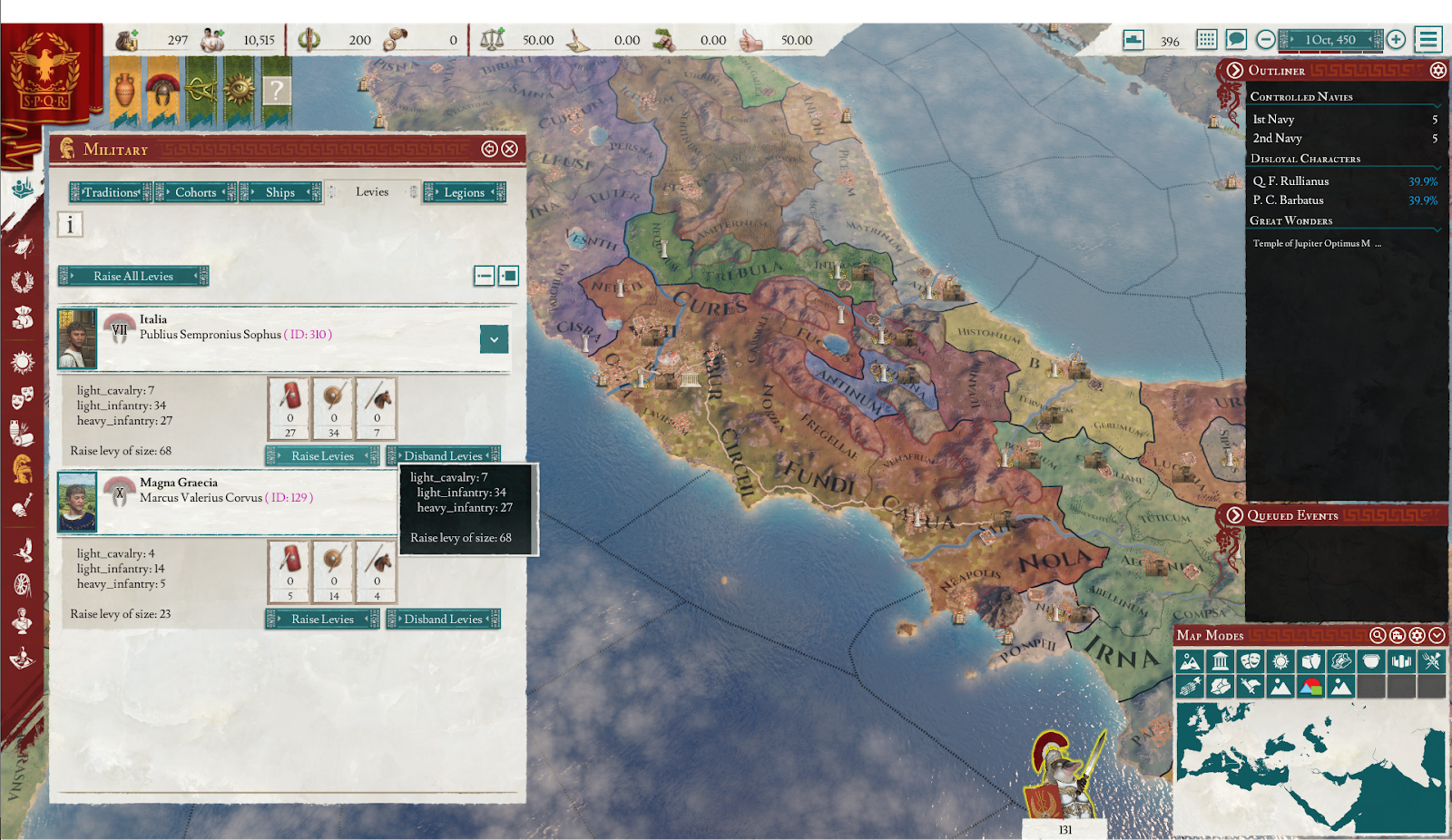 (screenshot of the current version of the Levy interface)

Levy Size​
Levies are raised on a Governorship basis, and only pops that belong to integrated cultures will be called up. Since all able-bodied men from that pop are now part of your armed forces, any pop that is part of the levy will stop contributing to the economy, until the levy is disbanded.
In addition to not producing income while levied, a pop that is part of a levy is exempt from migration, assimilation, conversion, and starvation. Perhaps most importantly, when a unit dies, so may it's associated pop!
Raising levies have no cost in itself apart from a small bump in War Exhaustion. Keeping the levy raised for a long time will incur a ticking War Exhaustion, similar to when you are at war in the current version of the game. 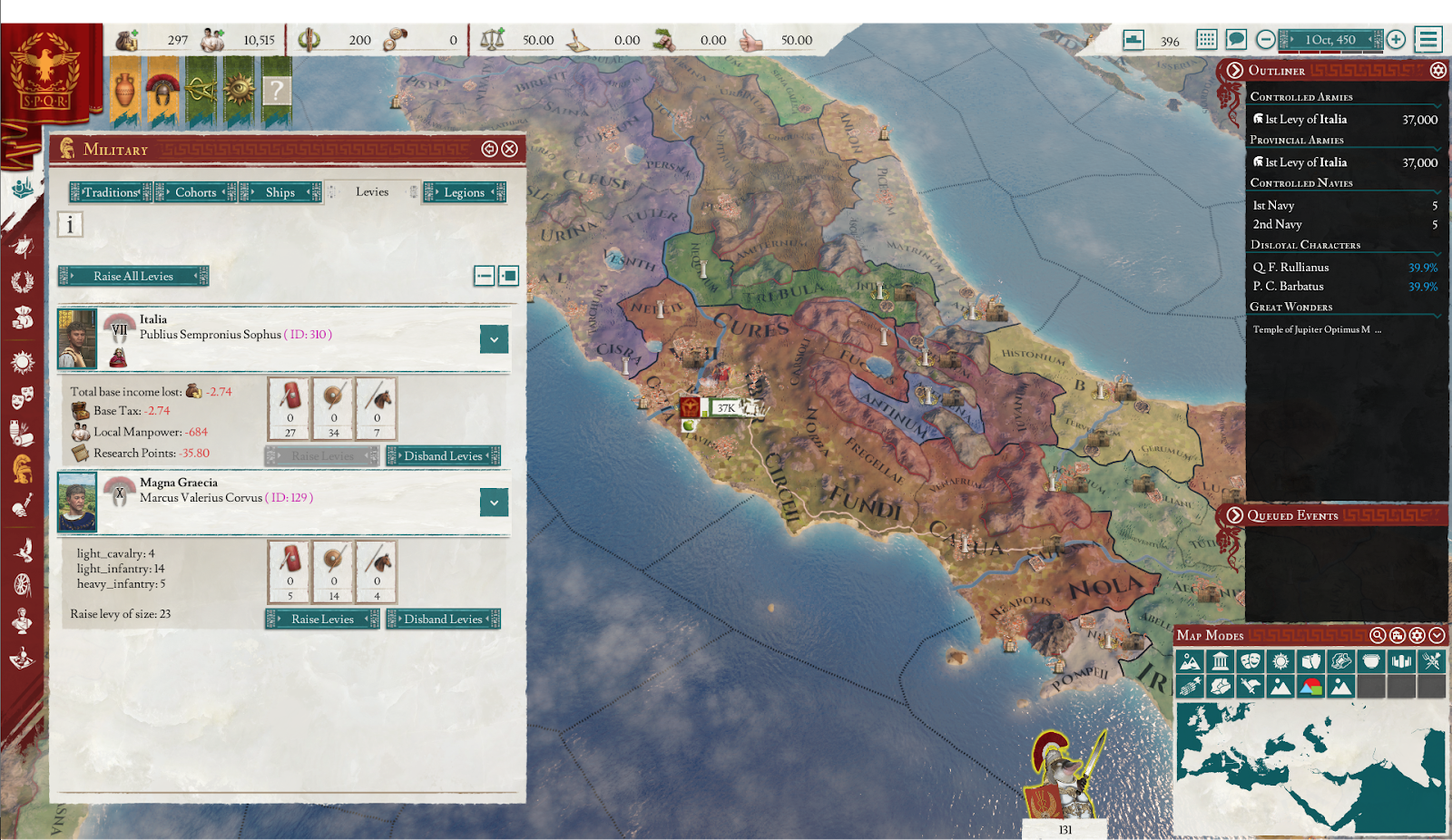 How many of the integrated culture pops that are mobilized if you choose to raise your levy is mainly dependent on two things: Current Military Reform Law (these have been revamped a bit for both Monarchies and Republics) and your current Economic Policy.
The latter may be preferable if you want to decrease or increase your levy size somewhat temporarily, while laws are better for your long term goals. Republican laws for levies tend to give slightly bigger numbers than those of the monarchies (who on the other hand have easier access to Legions - but more on those later). 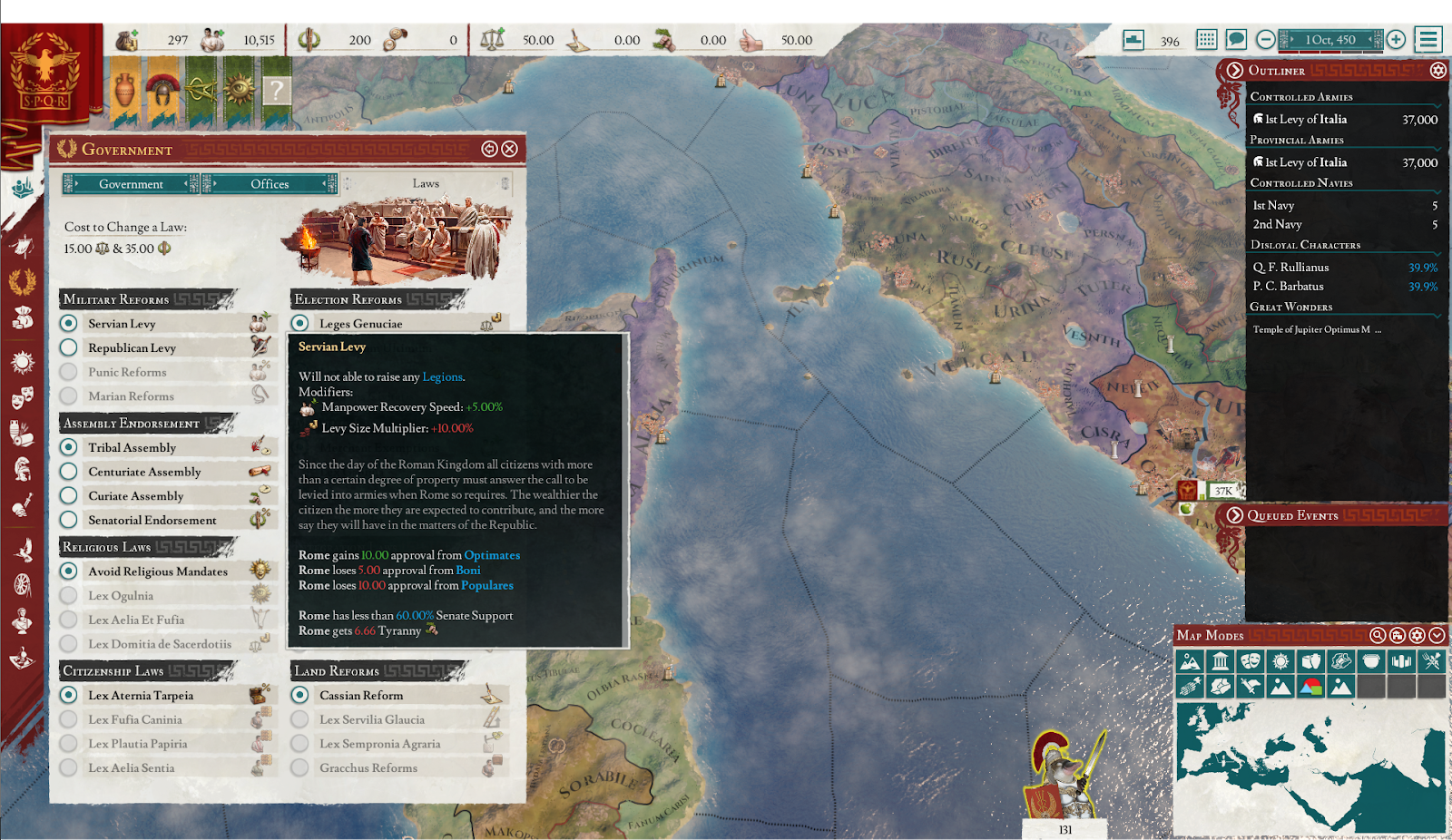 (An example of a law affecting levy size, the color coding is not final )

Levy Troop Composition & Troop Type​
Unlike the current version of the game, you do not have direct control over what kind of troops your levied armies contain. What kind of troops you get is instead dependent on the culture of the pops being raised, with each culture in the game having its own preferred troop type template.

This means that levied troops will vary greatly depending on where in the world you are raising them, and dependent on what cultures you have integrated. An Etruscan levy is going to be different from a Roman one, and a Macedonian levy will be different from a Carthaginian one.
In addition to being dependent on culture, the unit type maps to different pop types. A cohort of Heavy cavalry is going to be raised from Citizens or Nobles, whereas an Archer cohort would be coming from Freemen or Tribesmen. 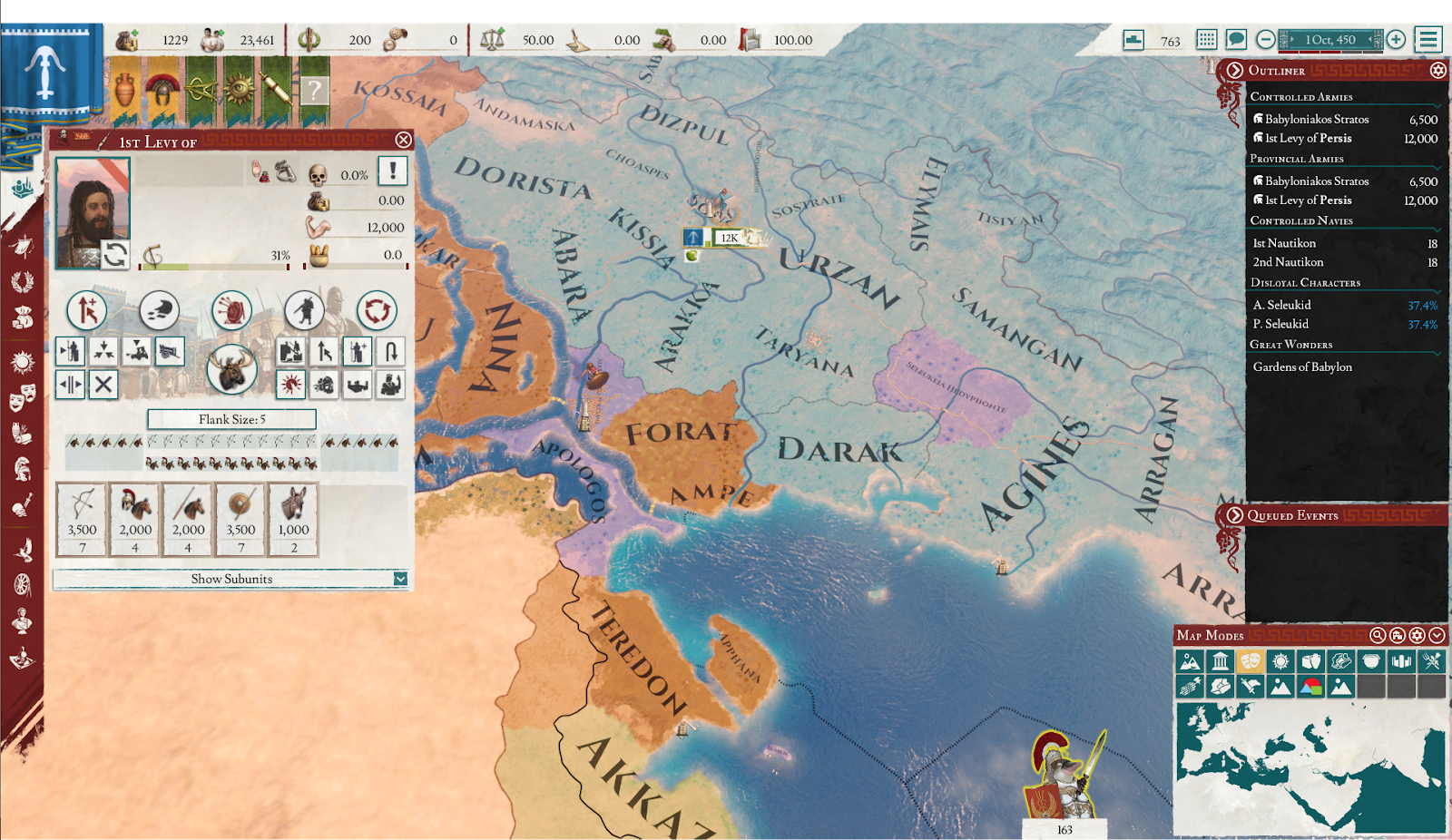 (A Persian Levy, raised in the hinterland of the Persis Governorship)
​
One thing this means is that if you move into a new region and integrate a culture there in order to gain access to their levies, you will likely also benefit from unlocking their military traditions, which are built to focus on strengthening the troops commonly levied for the cultures associated with it. 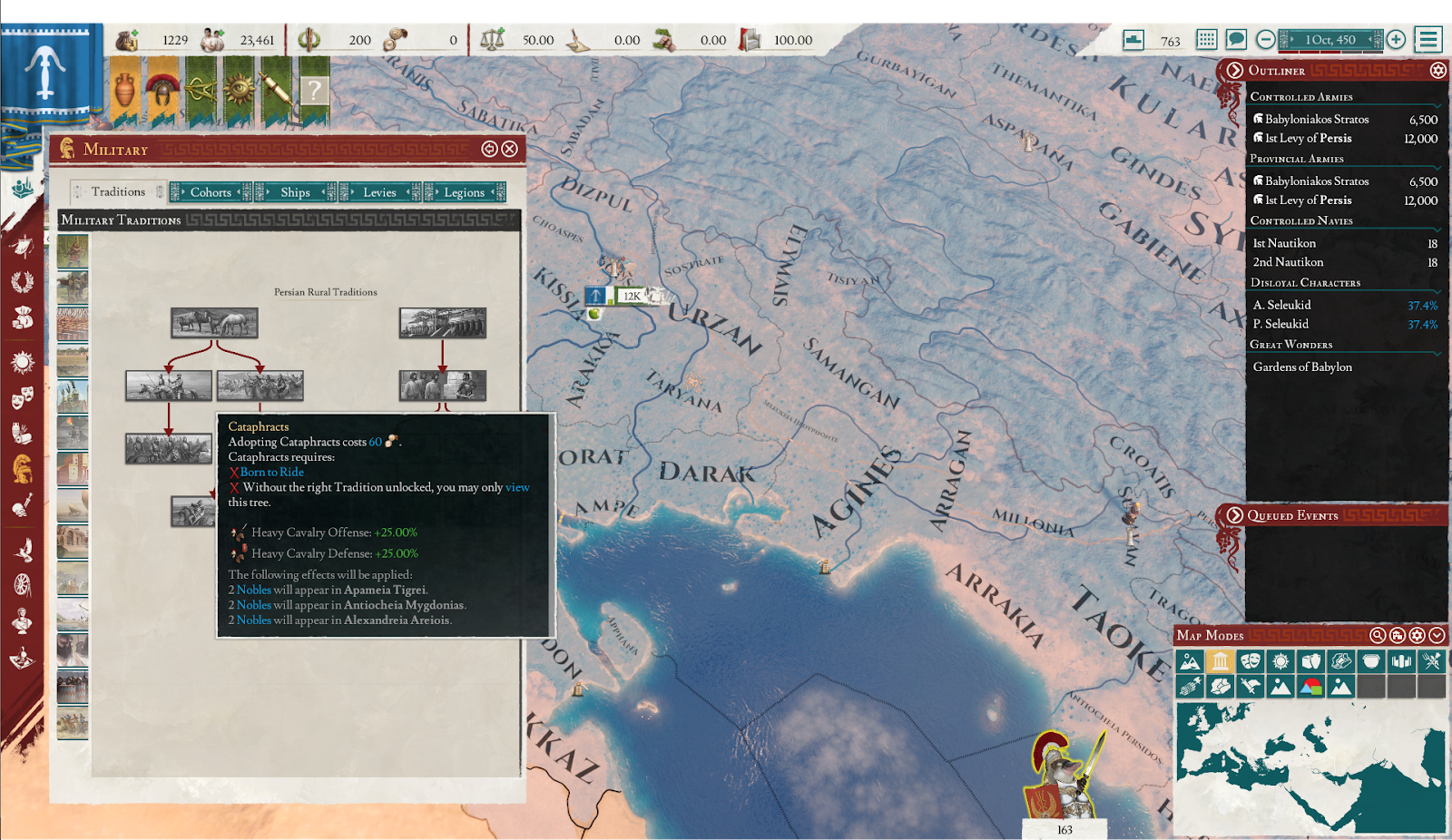 (As an example Persian Military Traditions have a branch that strongly focuses on Heavy Cavalry)​
Another effect of the levy system is that you will find that you will not always have the troops that you wish at your disposal. A levy in northern Italy or Gaul will see some nobles bringing chariots to the battlefield, in Arabia there will be camels, and so on. A general usually has to find a way to fight with the army he’s got, rarely the one he wants. What we intend with this system is that players will have interesting challenges in the military development of their empire, with the nature of your armies evolving alongside your culture and geographical expanse. 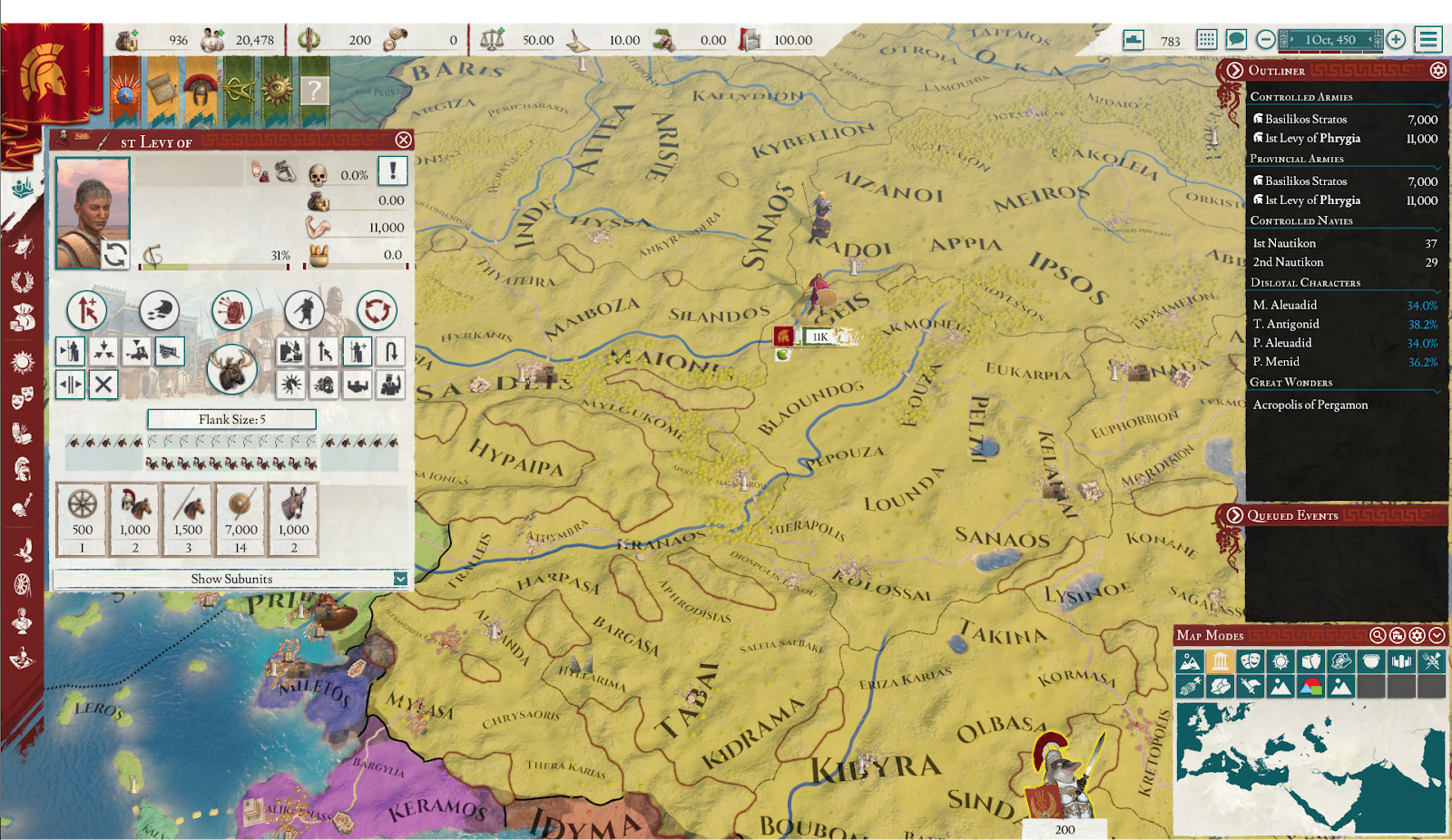 The Levy Commander​
As was often the case historically, we have given the governor a greater military importance when it comes to Levies. The Governor of the Governorship from which the levy is raised will be considered the commander for all armies levied from there. This means that in addition to picking someone who is both capable and loyal enough for you to expect to be able to control them, you now need to take in account their military skills. Your governor is not only the one who will ensure taxes reach you on time, they are also the person who will lead your troops from the designated region.


Tribal Levies​
In a tribal country political leadership is shared between a number of Clan Chiefs, with the rulership of the country passing between them with each succession.
In previous versions of Imperator Clan chiefs have also had 1 permanently raised Clan Retinue with a number of units under their command, increasing their Power Base as well as giving the player cheap troops.
In the Marius update, Tribal Retinues will no longer exist. Tribes will also never have access to Legions, unlike Monarchies and Republics.

When levies are raised in a Tribal Country they will attempt to converge into at least as many armies as there are Clan Chiefs, granting command of one army to each stakeholder in the Tribe. This means that for a small tribe the raised levies can result in 3 quite small armies, similar to how retinue sizes are currently quite small.

All troops that are raised in a tribe will also start out with personal loyalty to one of the clan chiefs, meaning that clan chief powerbase will spike in times of war when levies are called. After the war, when levies are disbanded they will turn into loyal veterans (similar to how loyal troops already do when disbanded in the current version of the game), increasing the power base of your clan chiefs with every war you fight, until that clan chief dies and a new chief takes their place.

Clan chiefs not leading an army (for instance if you wish to merge your tribal levies, or if their army was destroyed) when you are at war will get a sharp loyalty penalty since they are not allowed to act out their authority like they expect. Clan chiefs in command of an army on the other hand will receive a substantial loyalty increase, for as long as the war lasts. We hope the task of forging a strong, united tribal army that can challenge the established empires, despite a measure of internal strife and disunity, will be an interesting challenge for the player.


Legions - A Permanent Army​
Does the introduction of Levies mean we have no military commanders or permanent armies anymore? That we will now never have any control over what troops we bring to war? Not at all. As hinted before, the permanent army is not gone completely, but as in history it will only enter the scene gradually - and only for Monarchies and Republics. It will see its return in the form of a feature we call Legions, permanent armies of the kind that the Roman Legion system developed into after the Punic wars and brought into the Imperial era.

We will be talking more about Legions, their composition and specialization, and the way that they will follow you throughout a campaign in a future development Diary.
Toggle signature
No fighting in here! This is the war room!
Reactions:

I'm very surprised, in a good way.
Toggle signature
"I have existed from the morning of the world and I shall exist until the last star falls from the night.
Although I have taken the form of Gaius Caligula, I am all men as I am no man, and therefore I am a god."​
Reactions:

HELL YEAH, That is like almost exactly like my 'winning' suggestion in the Senatus popules threat. You guys must have been laughing your ass off seeing that one go to the top while (probably) allready working on this feature.

A question, what about Mercs? Can we see them as some sort of auxillaries where you can raise armies in a region even if you have not integrated that culture with as a downside that you can't develop the specific military traditions making them less effective?
Reactions:
M

Does it mean every culture will have access to legion-type armies?
Reactions:

Looks great! Hope to see a new feature in the future that would make it harder for Rome to take lands on the other side of the Rhine. Can't wait to get back to Imperator!
Last edited: Nov 9, 2020
Toggle signature
Make Sure the Regnal Numbers are Historically Accurate in CK3
Reactions:

This is simply phenomenal, it's literally Imperator 2. Great work all, hopefully people come back to the game!
Reactions:
S

Why not? I'd go even further giving different manpower pools based on your pops type, although that might be an overkill dunno
Reactions:

Since pops are tied to levies now, will you lose the pops if the unit is destroyed in battle? For example if one of your armies is completely wiped out would you lose the pops called up and thus take a hit in your economic output and everything related to pops?
Reactions:

Sounds good keep it up guys.So actulay when you lose troops you lose population?
Reactions:
P

Simply the Best Change Ever.
Reactions:

brty941 said:
Since pops are tied to levies now, will you lose the pops if the unit is destroyed in battle? For example if one of your armies is completely wiped out would you lose the pops called up and thus take a hit in your economic output and everything related to pops?
Click to expand...