Today we will be having a look at the Roman exclusive missions coming with our free Content Pack: The Punic Wars.

To give Roma’s inevitable ascendency some direction, each mission concentrates on expanding into a different part of the world, starting with the Italian peninsula itself and spanning the Mediterranean from Hispania to Syria.

Roman Italia
Rome has ascended swiftly in the wake of her victories over the Samnites and Etruscans, and a desire for control of the entire Italic world has already taken root. Senator’s vie to stir Rome to war and win glory, with the Latin’s oldest rivals being prime targets. 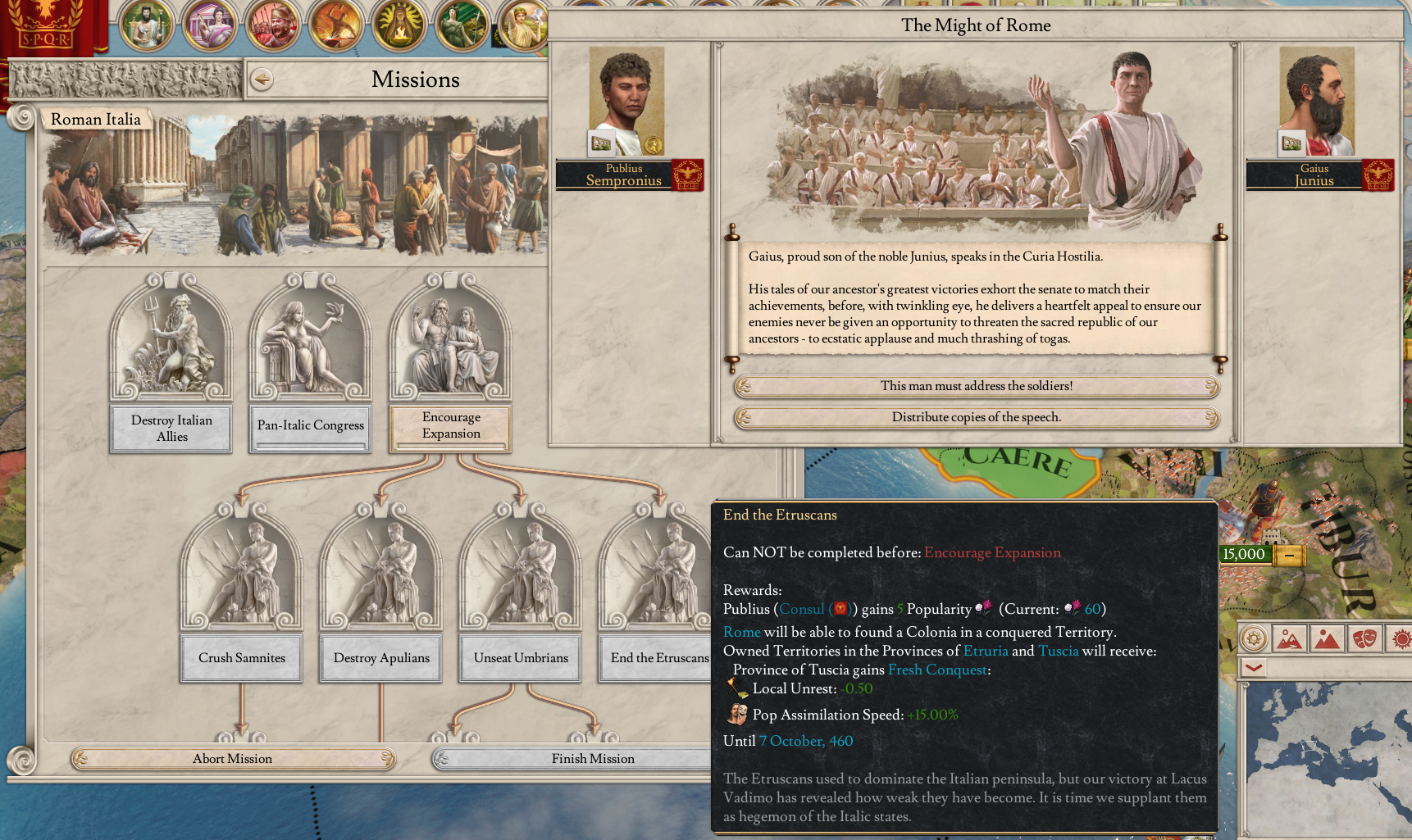 Rome may also defy Mars and expand peacefully, organizing a Pan-Italic Congress which can offer opportunities for making allies and feudatories of Italic states, while Approach Greeks and Adriatic Adventures may establish Hellenic tributaries. However, creating subjects will bypass the associated area’s conquest tasks and their colonial rewards (see below). 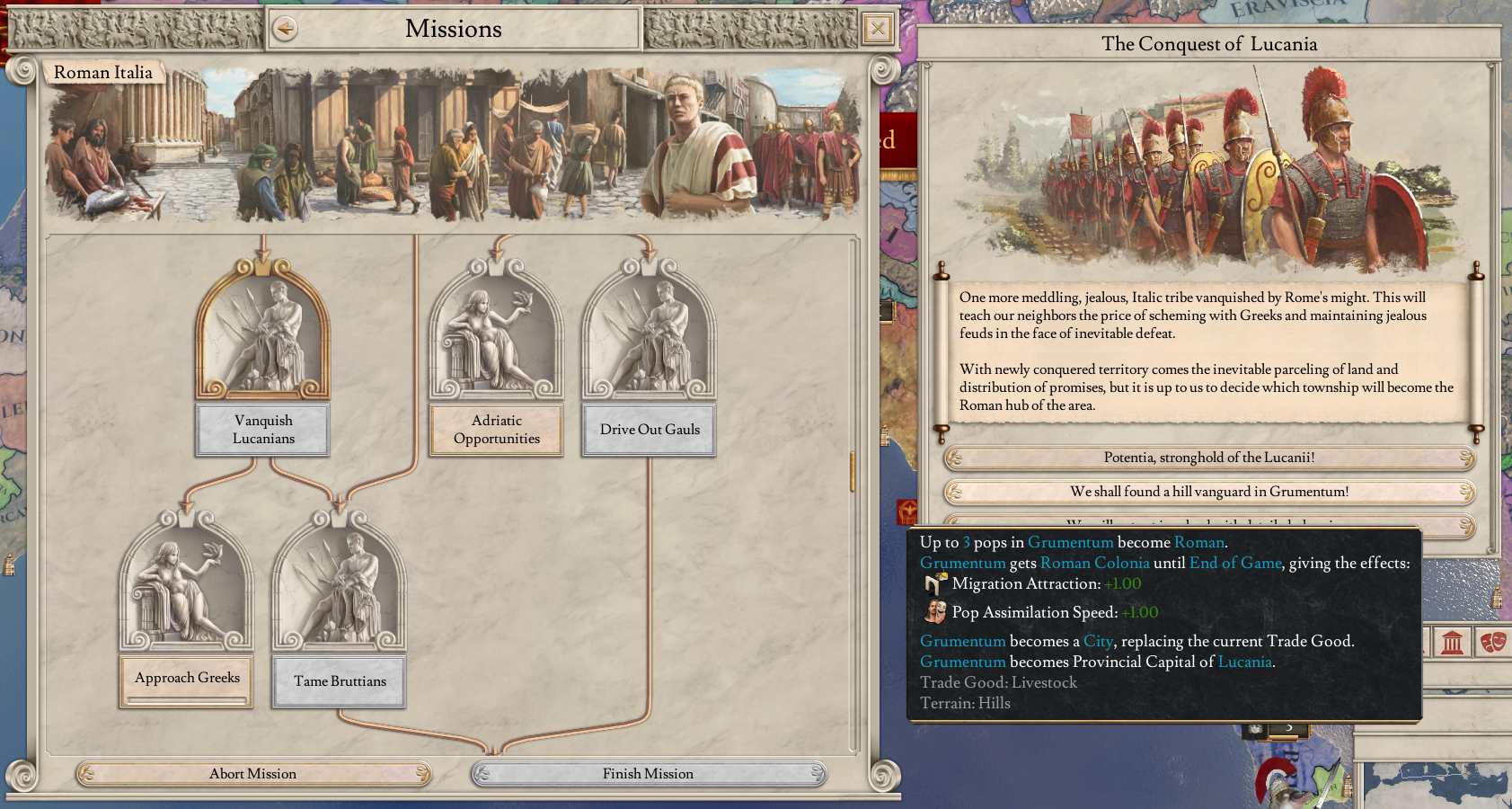 Most Roman missions provide a selection of territories in which to establish a Roman Colonia after completing a conquest task, instantly assimilating a portion of the population, granting a permanent bonus to Pop Assimilation and Migration Attraction, as well as moving the Provincial Capital and instantly promoting the territory to a City - or, if one already, creating some Roman Freemen pops. 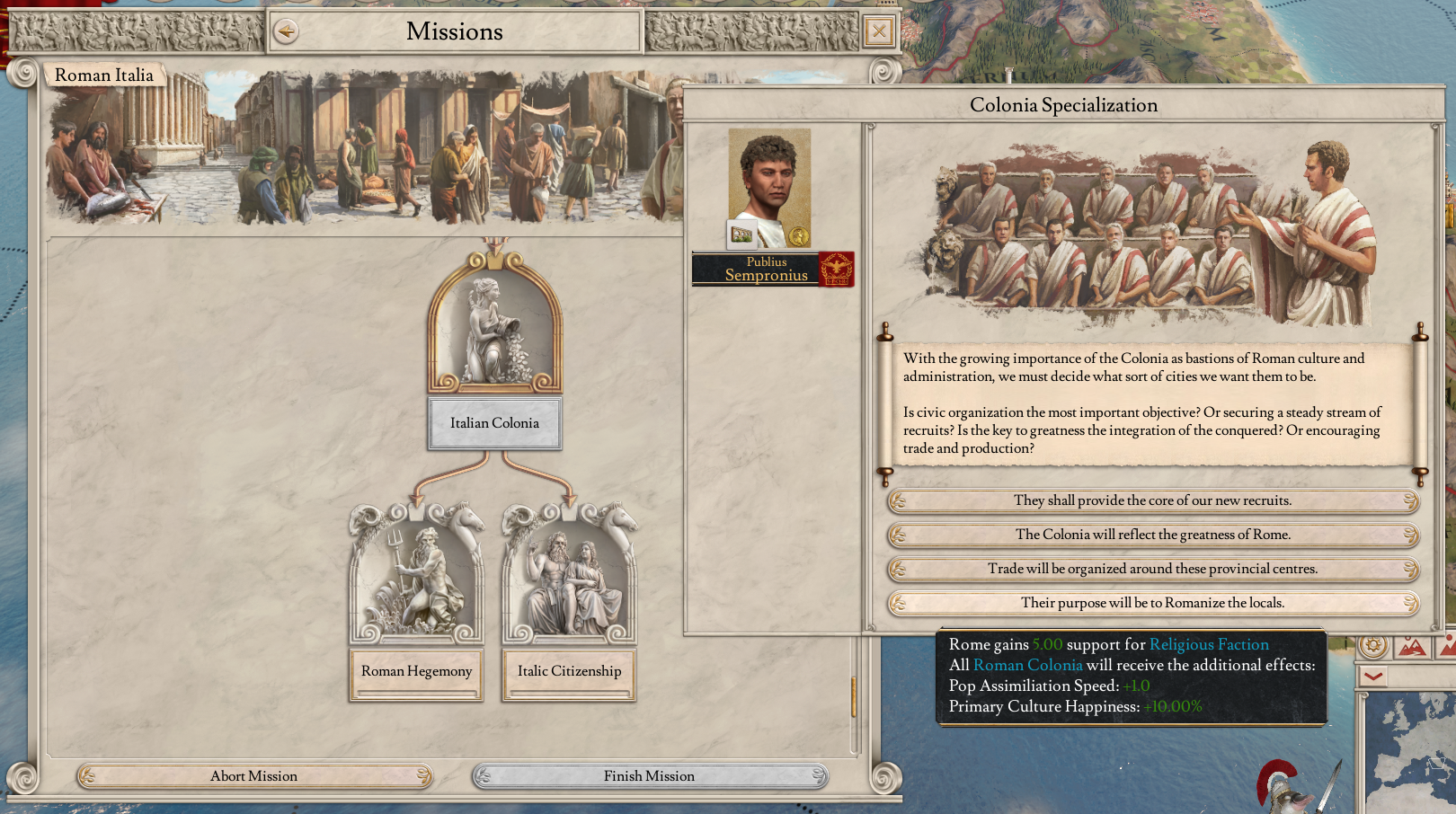 After subduing the peninsula, Rome will be able to choose one of four specializations for the Roman Colonia; pursuing enviable cities, bolstering recruitment, encouraging trade, or enhancing conversion and assimilation. This bonus will be applied to all prior and future colonia.

Finally, Rome can either offer Roman citizenship to all Italics, defying Roman mores and upsetting the ancient aristocratic families, or maintain Roman hegemony at the cost of agitating non-Roman Italic pops and subjects.

The First Provincia
Expansion into Corsica, Sardinia, and Sicily offered Rome her first so-called ‘Provincia’, foreign lands administered by an appointed governor - usually prioritising their own profit - far from the politics and oversight of Rome. 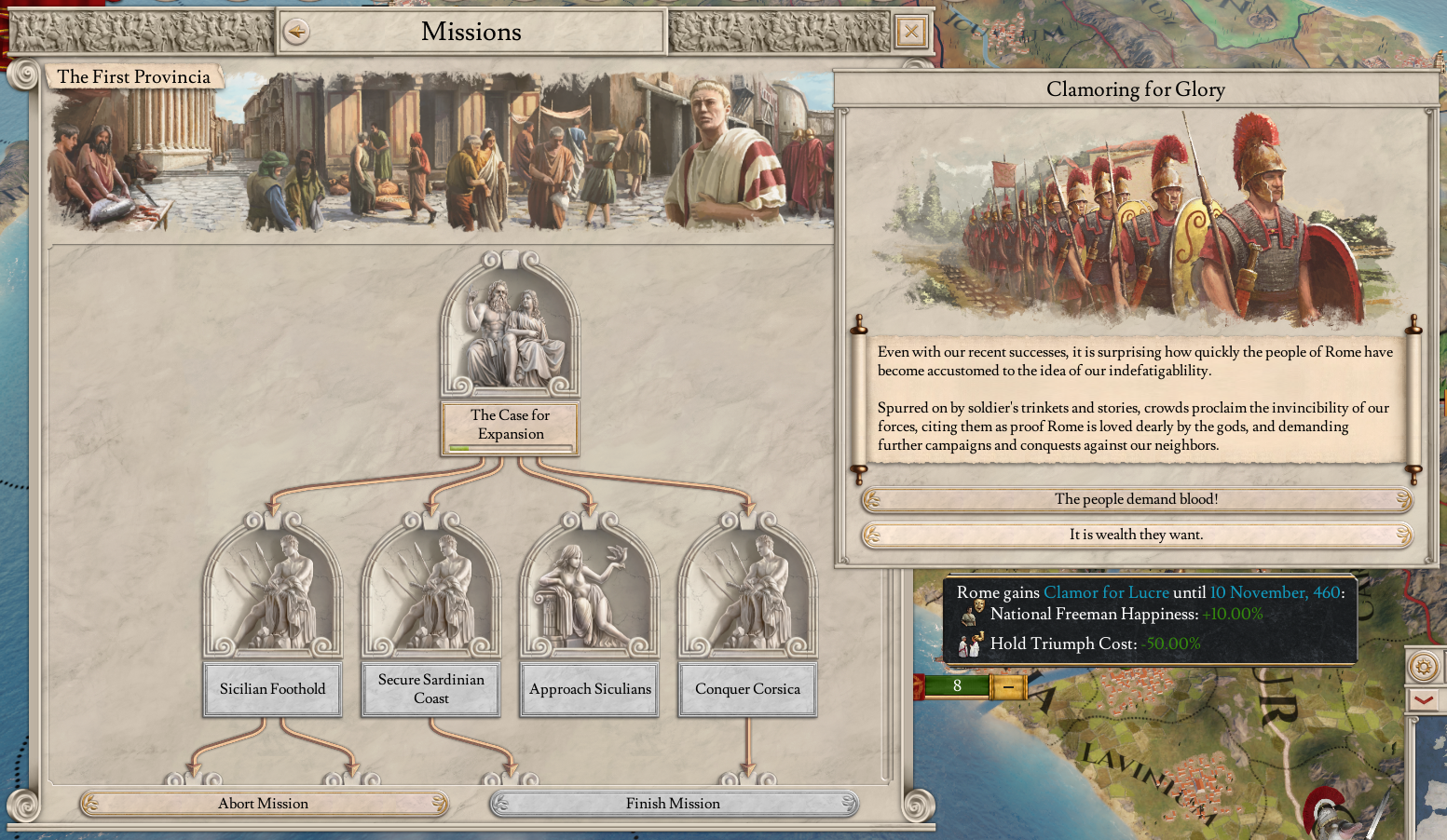 After staking claims across the sea, the three island’s branches can be completed in any order. Annexing Sardinia and Sicily will put Rome at odds with tyrants of Syracuse and the Carthaginian empire. Corsica is an easier target, but Rome must be swift to ensure the old Greek and Punic colonizers do not take advantage of Etruscan weakness first. 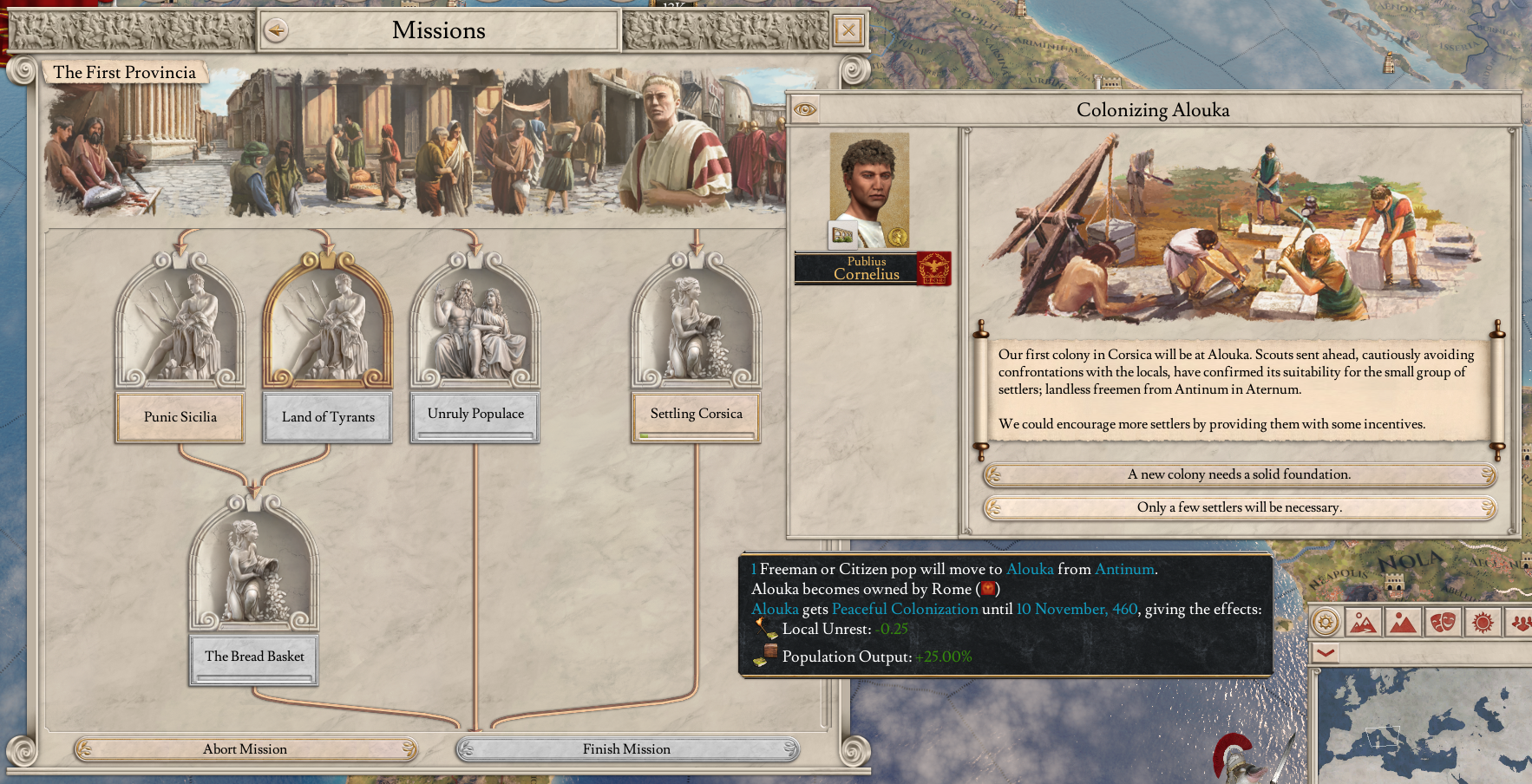 Settling Corsica will allow Rome to quickly colonize unclaimed parts of the island, Unruly Populace will explore the problems of governing Sardinia, and The Bread Basket will grant bonuses to tax and pop growth across Sicily once it is fully controlled.

With the islands dominated, Rome will be able to choose between a policy of metropolitan Romanization or economic exploitation, affecting output and assimilation across the islands.

Cisalpine Gaul
Northern Italy is still considered part of Gaul, differentiated from modern France as Cisalpine Gaul, or ‘Gaul on this side of the Alps’. Conquering this rich region on Italia’s doorstep is of course necessary to safeguard Rome’s northern borders... 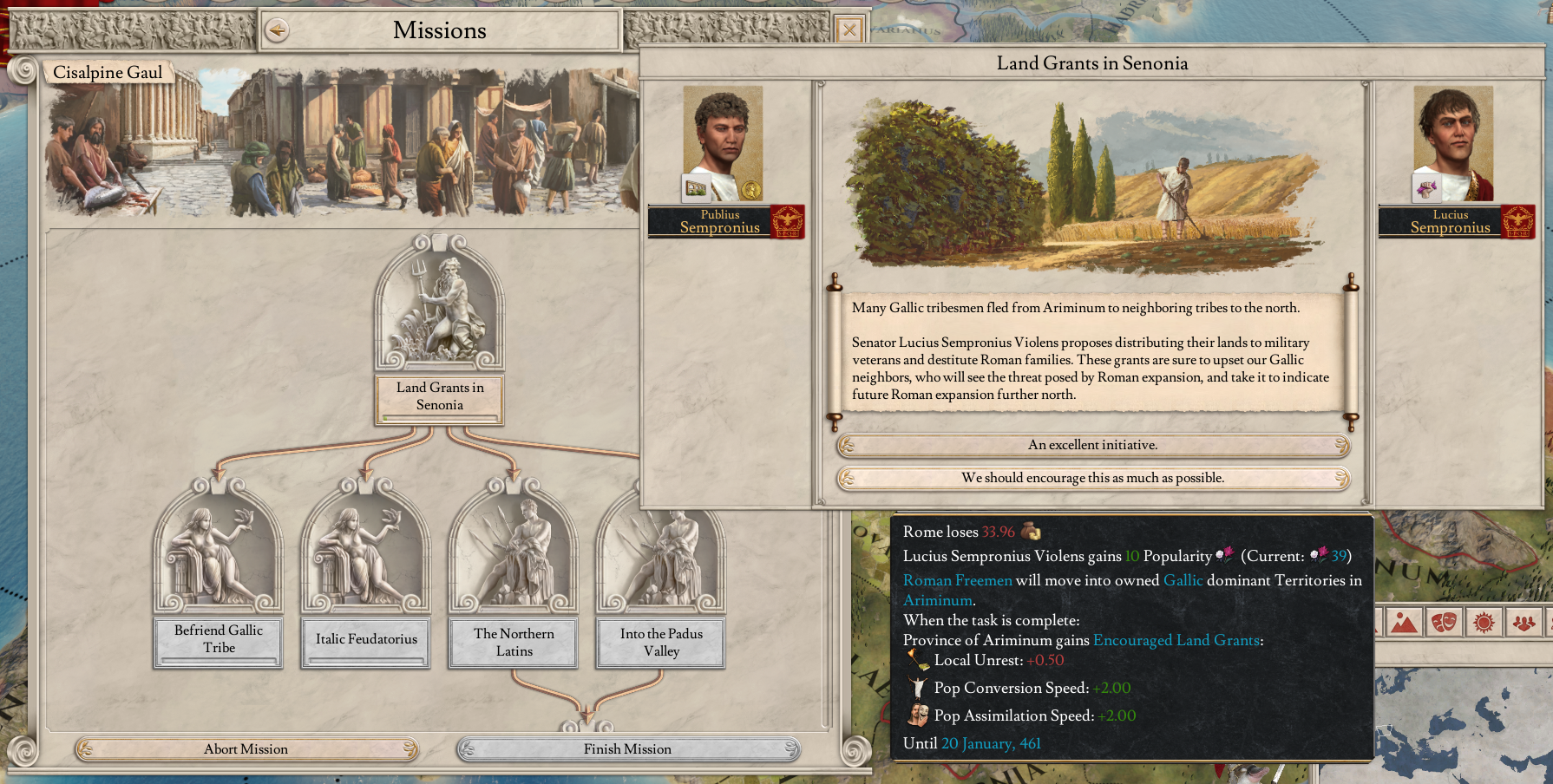 Granting lands in the Senones’ territory will upset the Gallic tribes of Cisalpine Gaul, but give Rome claims on them. Attempting to befriend neighboring Gallic and Ligurian tribes opens the possibility of receiving a Vassal Tribe or Feudatory respectively. 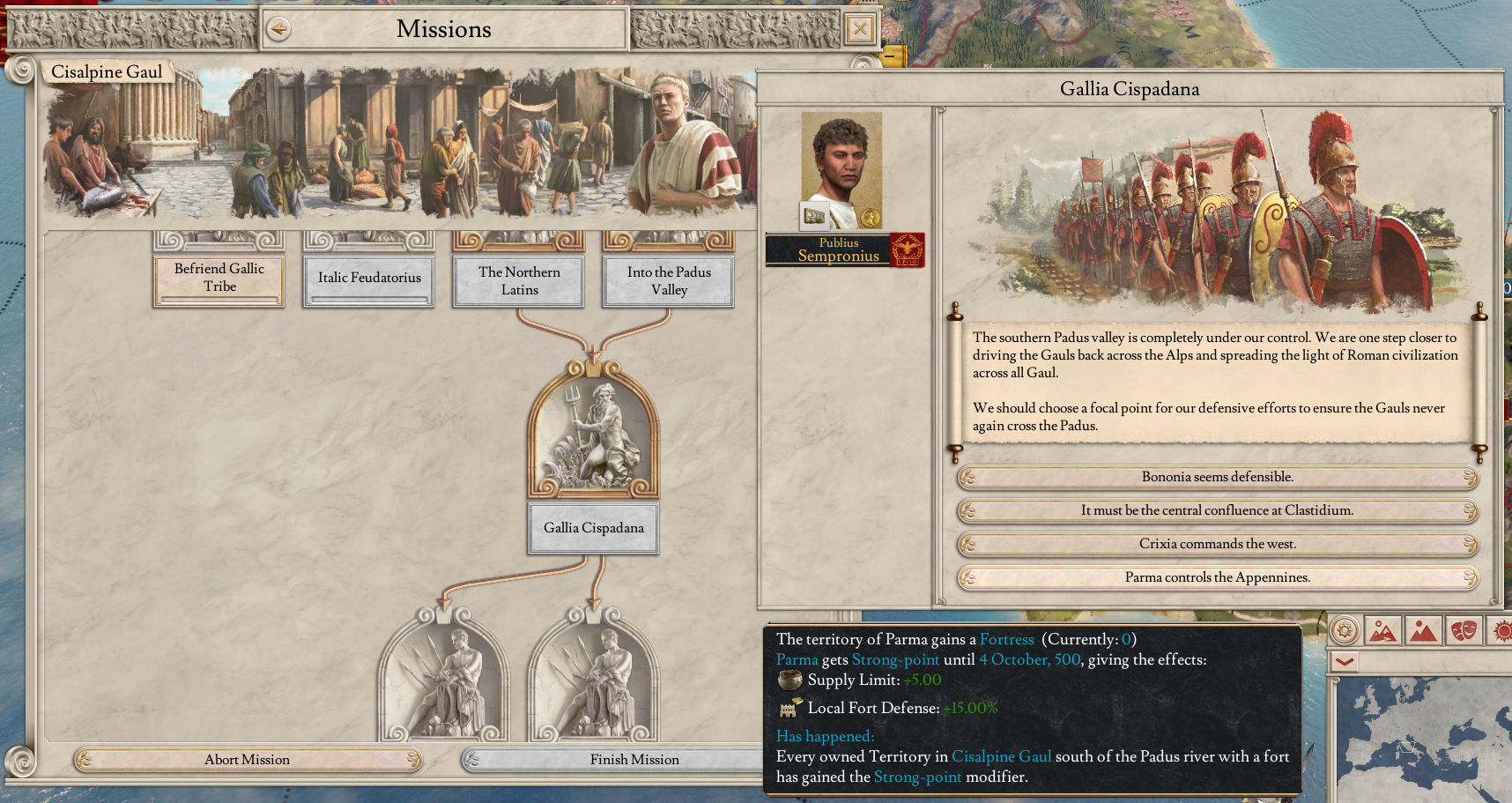 Securing all land south of the Padus river (now known as the Po) will allow Rome to fortify a chosen location and grants a temporary bonus to Local Defensiveness and Supply Limit for all owned forts in the area. 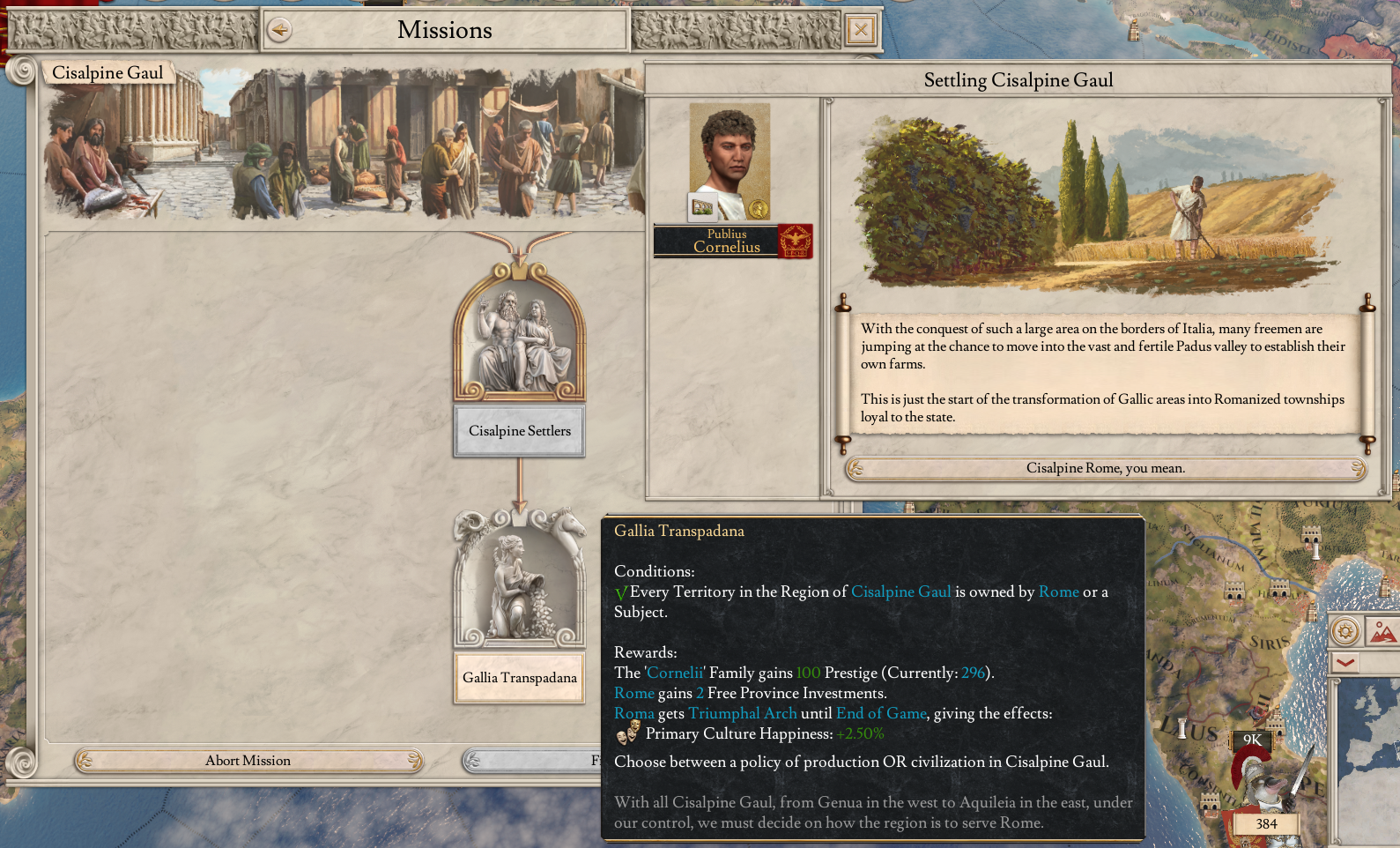 Once all Cisalpine Gaul is under Roman control, Rome can encourage settlers to kick-start Romanization, before choosing between boni to assimilation or output across the region.

A few of the Roman missions will also add successive Triumphal Arch modifiers to the Roman capital after conquering a region, each adding +2.50% Primary Culture Happiness.

Punic Rivals
Once Rome has secured Italy and the islands, she may take the fight to Carthage directly. This mission will focus on undermining the Punic empire, culminating in the destruction or subjection of Carthage. 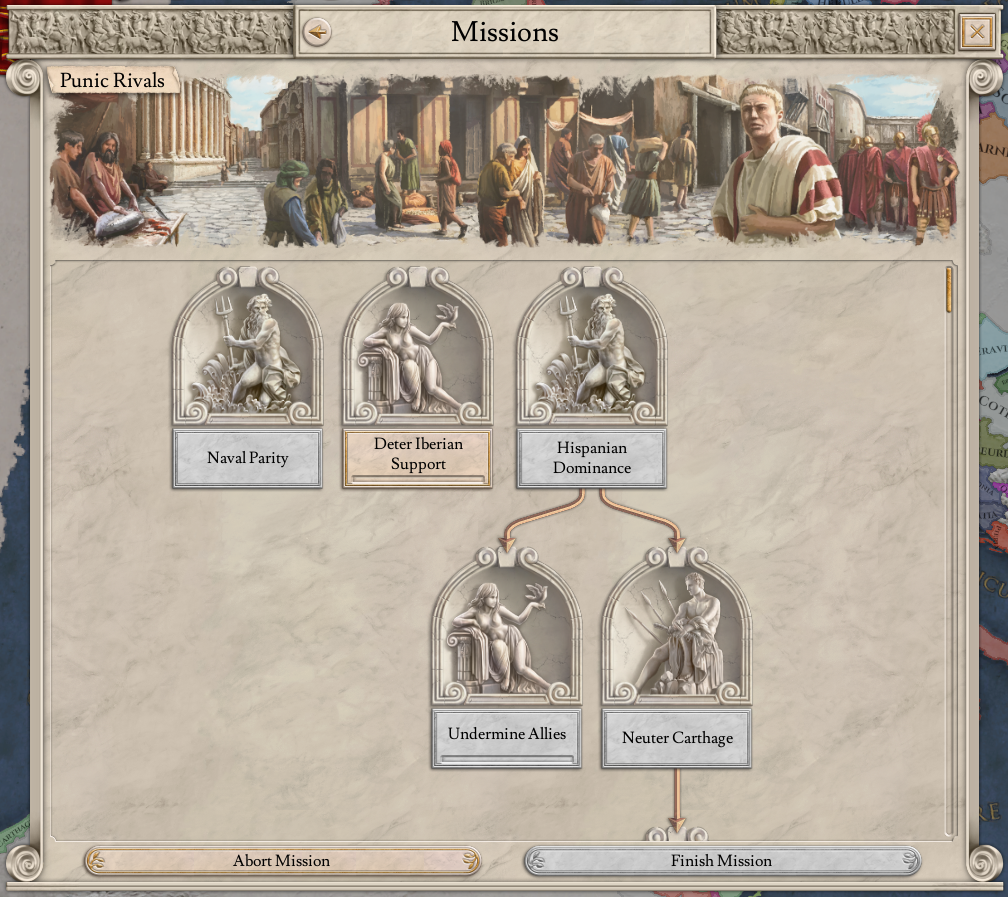 Rome must first force Carthage out of Hispania to deprive her of the rich colonies, and may approach the local tribes to turn them against the Punic barbarians. 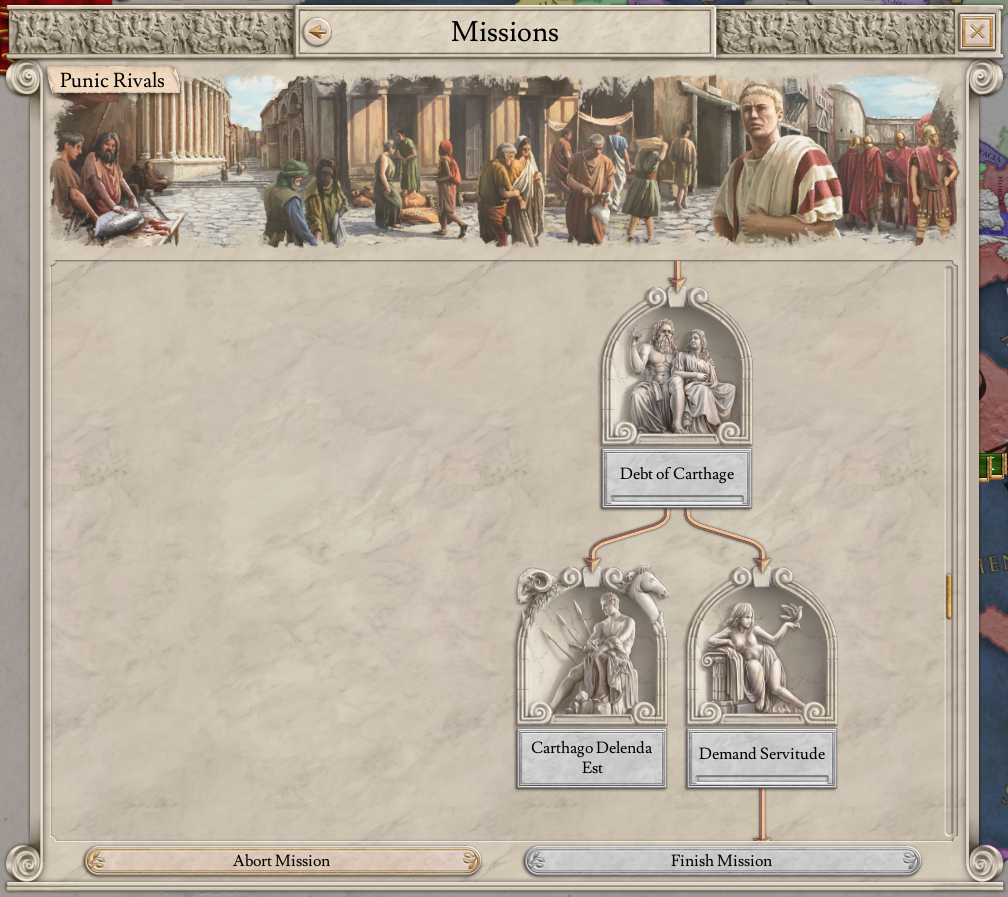 Weakening the Carthaginians sufficiently, by taking their land and undermining their subjects and allies, will allow Rome to demand tribute from her old rival. Depending on their response, and the sustainability of the situation, war may eventually break out once again, or else permanent friends may be made of the Carthaginians as a client state.

Hispanian Ambition
The rich lands of Hispania are a prime target for Mediterranean expansion, but the vastness of the task may deter even the most ambitious consul. This mission will grant claims to help Rome expand quickly, and offer opportunities for gaining vassals in the area. 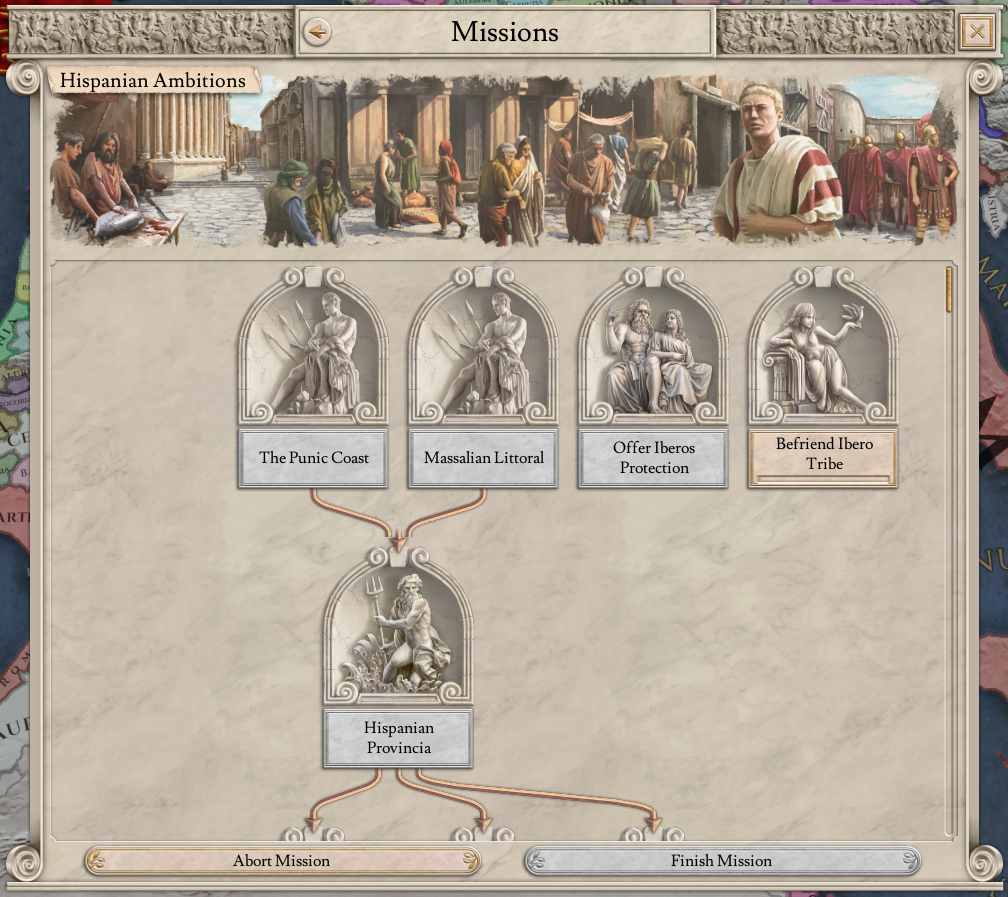 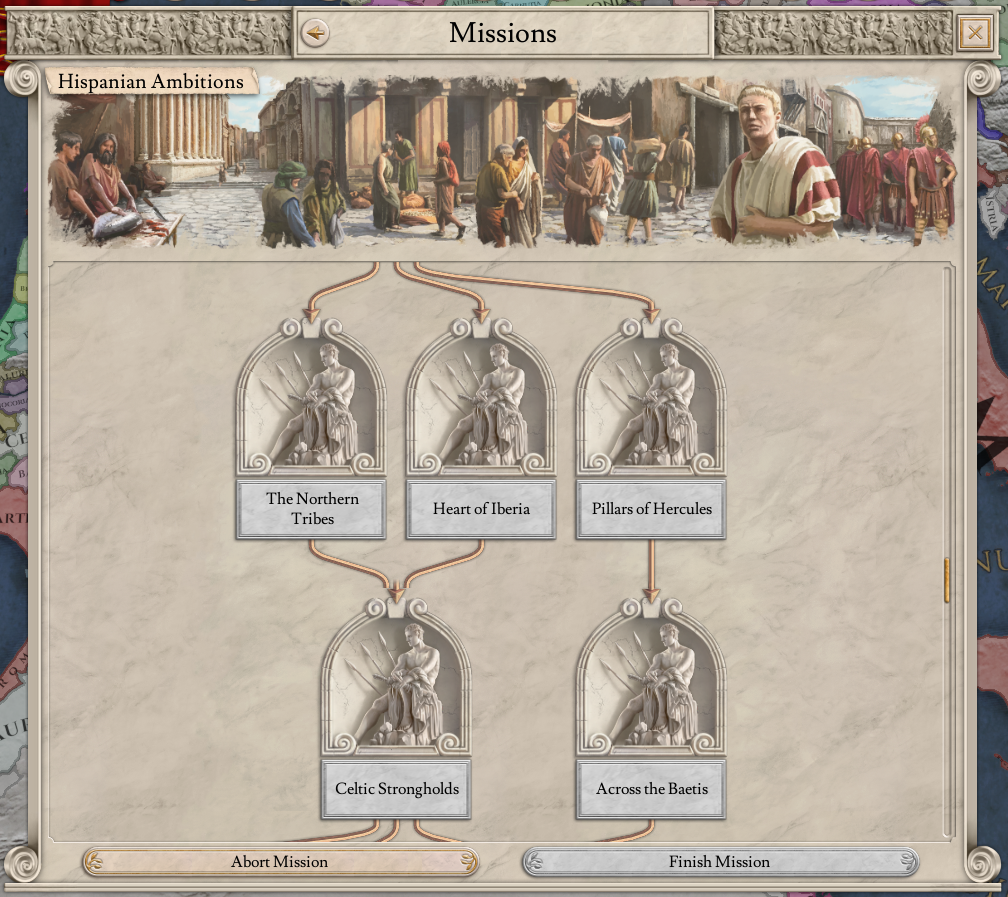 Due to the large size of this mission, you can drop out once the main tasks are completed, but bonuses will be granted to all Hispanian lands you acquire before finishing.

The Conquest of Africa
Whether Carthago has been delenda ested, or Rome just wants a place in the sun, this mission offers opportunities for further expansion into rich Africa. 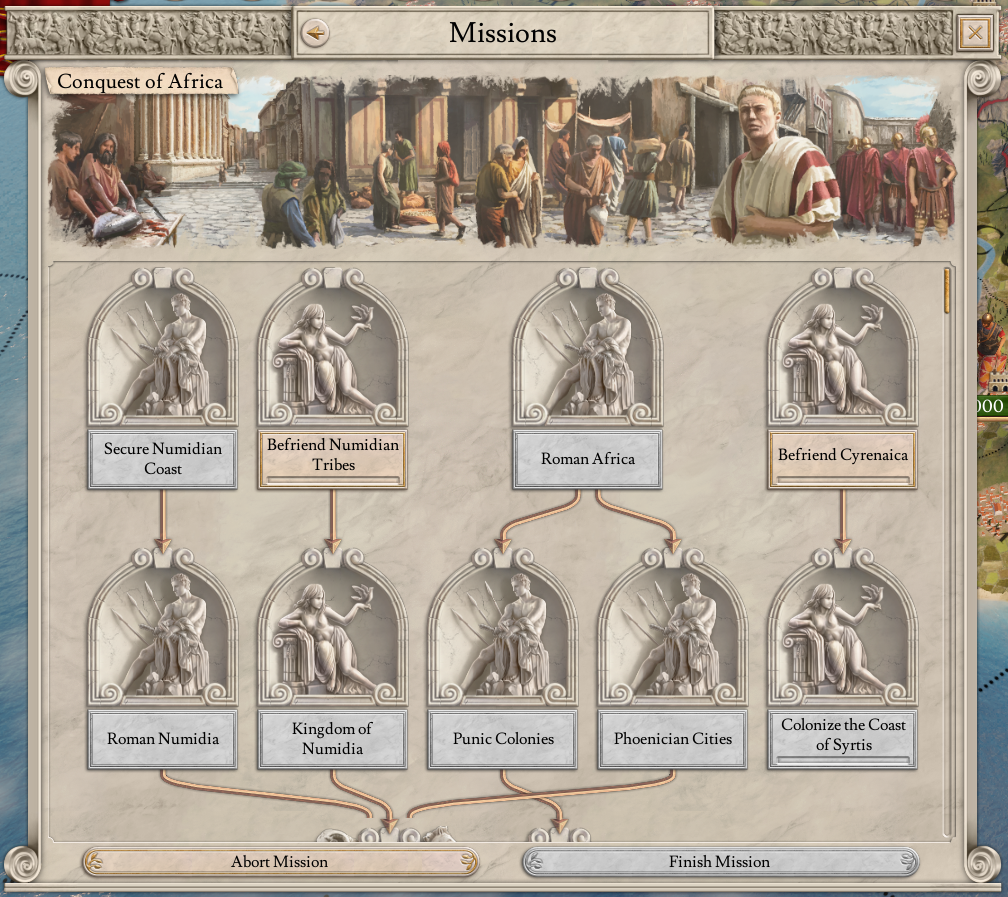 The Numidians may be befriended or subdued depending on preference, while approaching Cyrenaica will allow the settling of Syrtica if not already colonized. Along with Eastern Glory, befriend tasks in this mission allow Rome to inherit client states from ailing monarchs.

Subduing Gaul
This mission focuses on the conquest of Gaul, allowing two main axes of expansion; west through the Massalian coast, or north to the great river Rhenus. 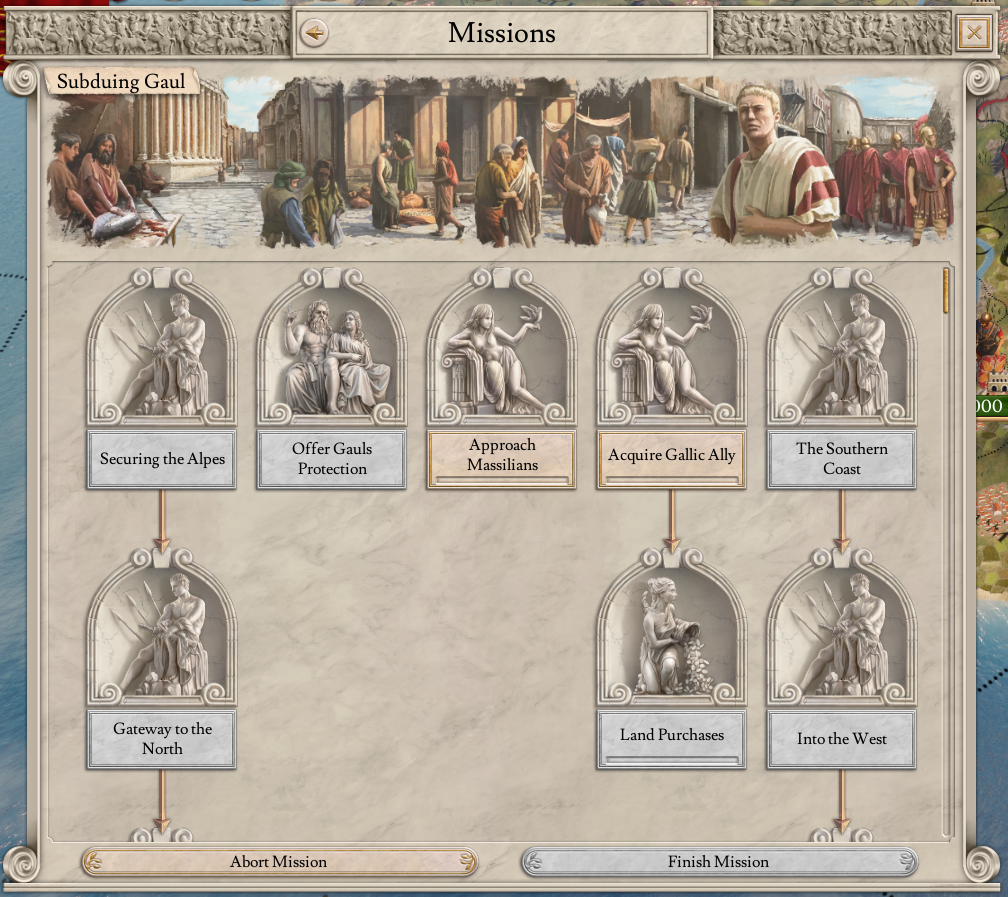 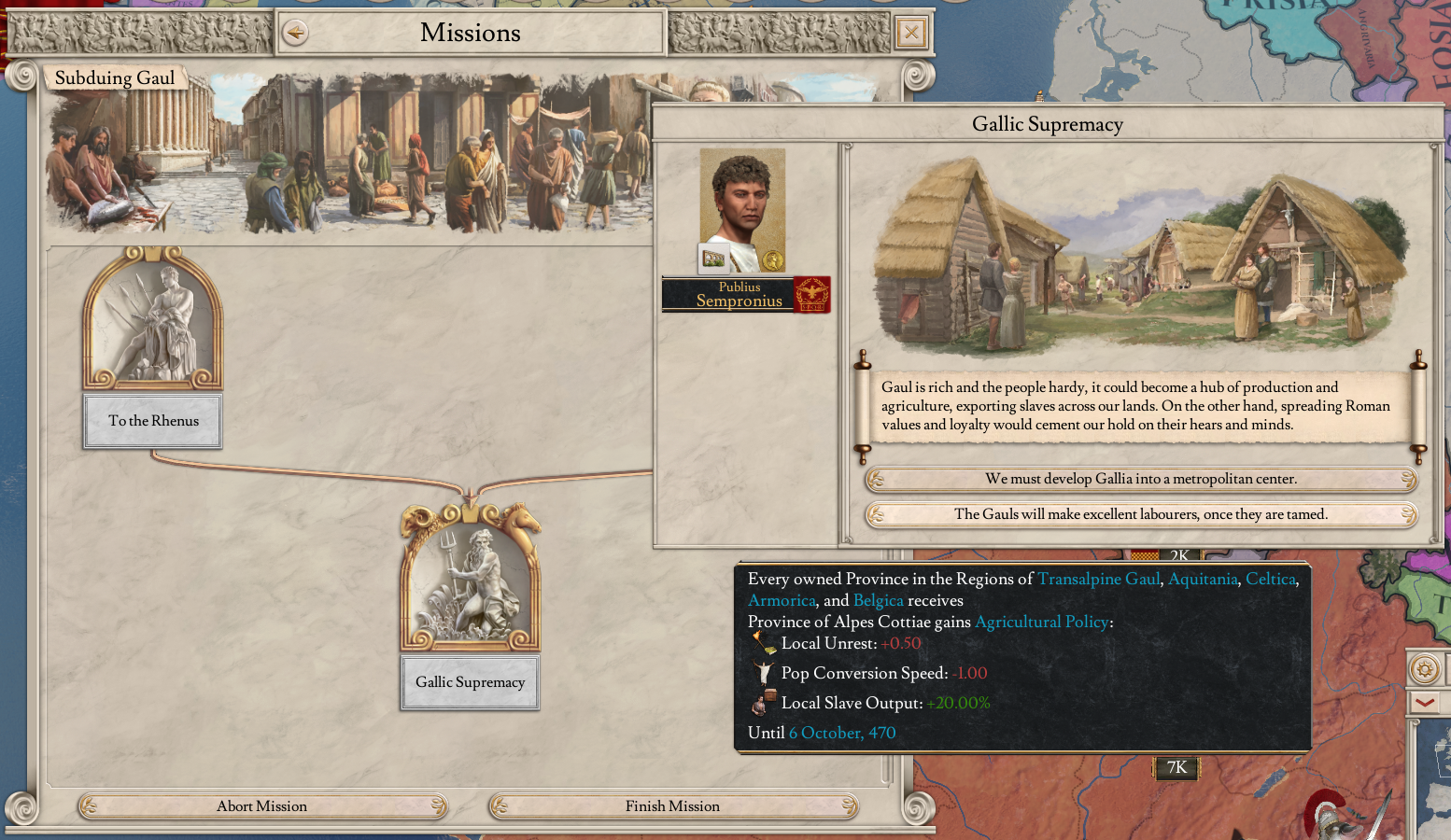 Both routes grant claims to expedite the conquest of such a great number of tribes, culminating in the pacification of Gaul as a province of Rome.

Subduing Greece
This mission will grant opportunities for diplomatic and military expansion into Greece, Illyria, and Macedonia. Will Rome liberate the dominated city states from Diadochi fetters, or just replace one overlord with another? 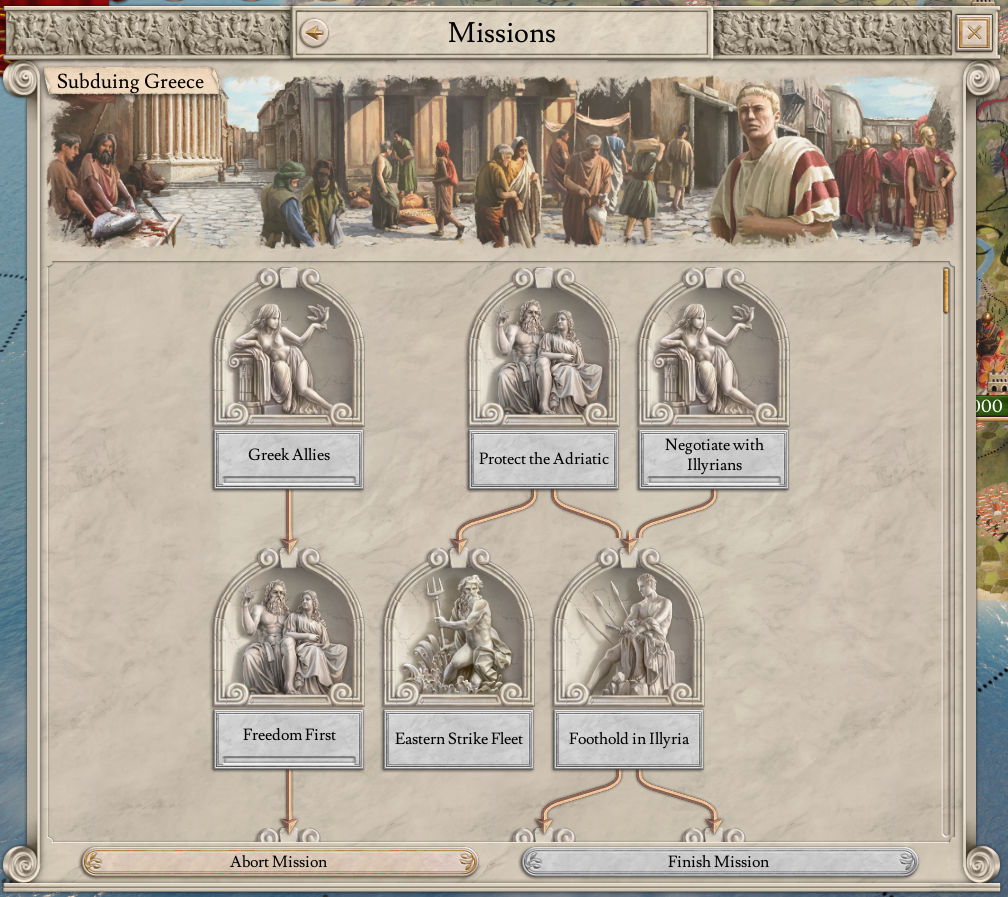 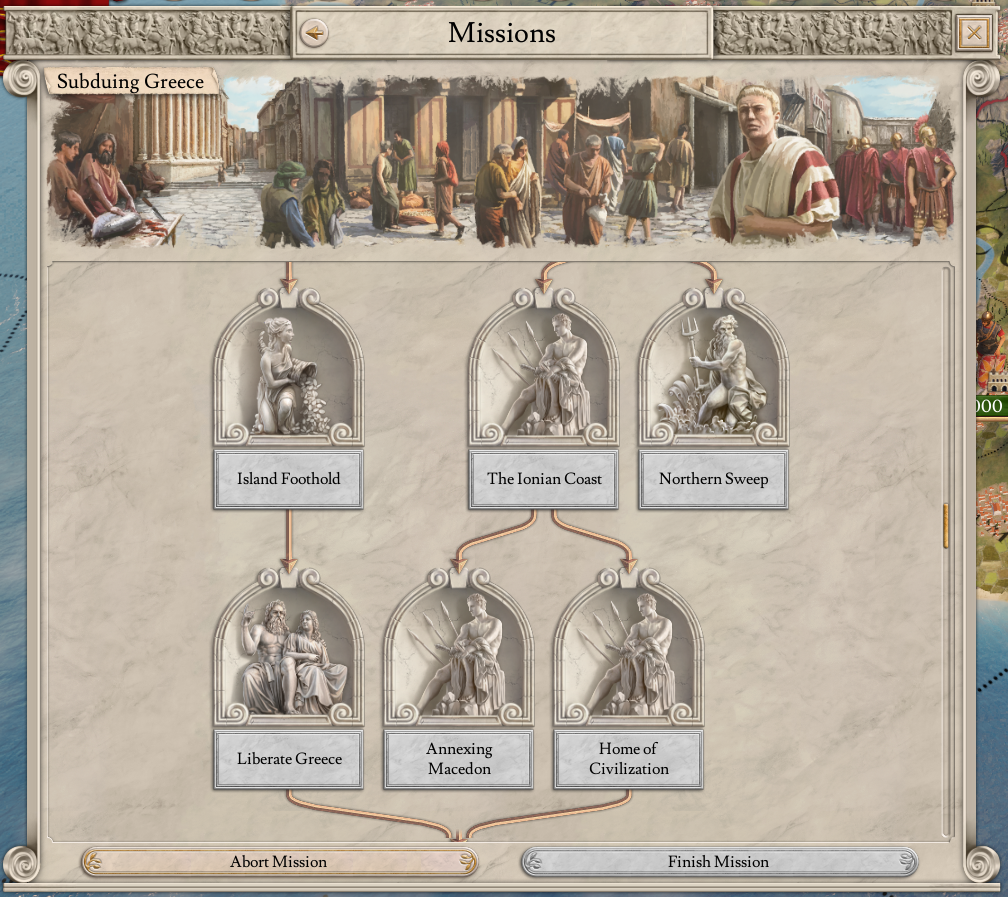 Once Greece is mastered, Rome will be able to release certain Greek city states as Client States, or integrate the old Greek lands into Rome.

Eastern Glory
Finally, this mission will concentrate on the rich lands that lay to the east, beyond Greece. 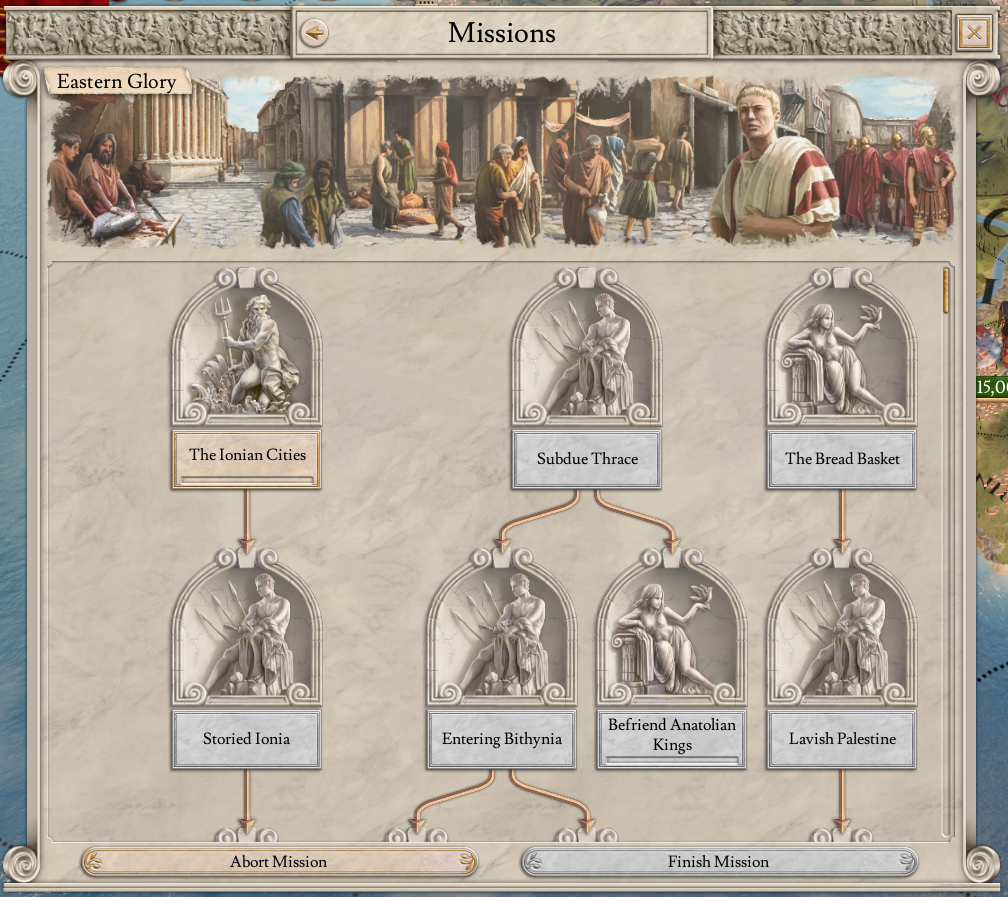 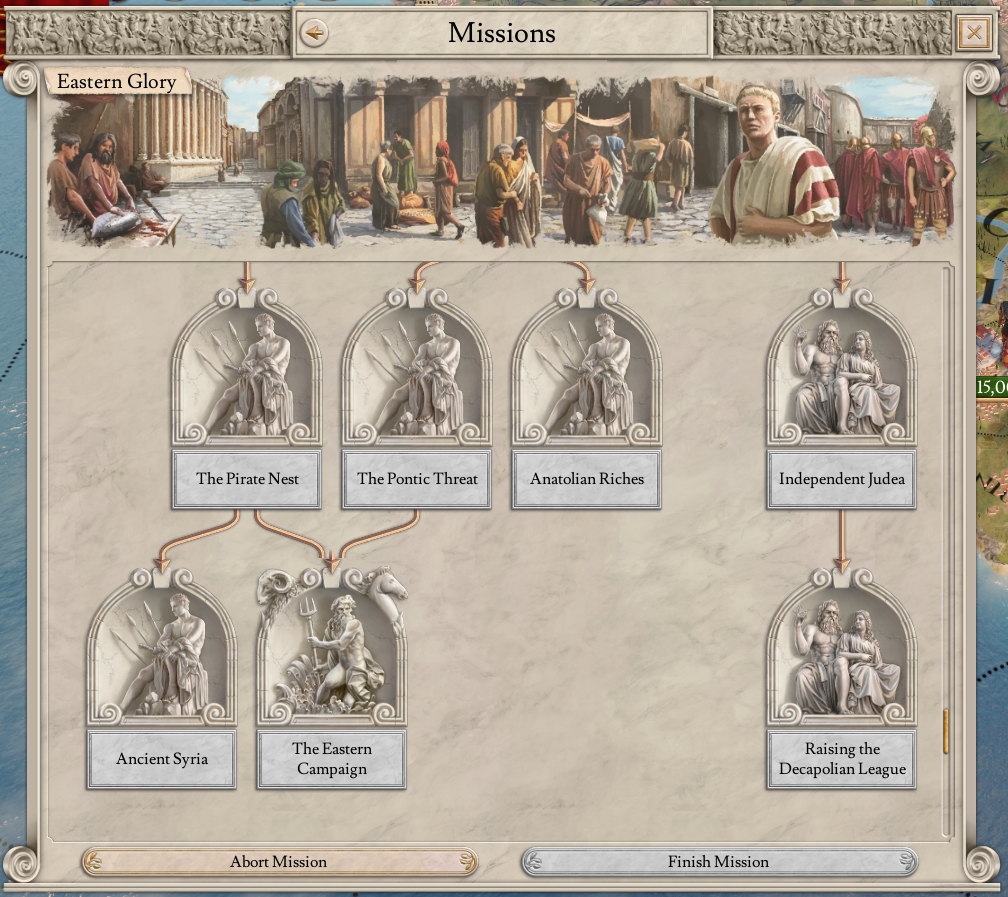 Rome will have opportunities to create subjects, inherit eastern kingdoms, and befriend diadochi dynasts, but beware the vainglory the east can inspire in those who are enriched by it.

Thanks for reading and stay tuned; next week we will look at some dynamic generic mission trees which will be available for all countries!
Last edited: Nov 11, 2019

Mission system is turning out to be quite lovely

No bonus picture of Carthage being white? Sad

Rome is way too strong and thus, boring. I think this is the wrong approach.

I do like how Romanisation will work with new cities build etc
Toggle signature
"I am the senate" - Caesar.
"Not yet" -Junius Brutus.
"I love the republic" -Augustus.
"UNLIMTED POWER!!!" - also Augustus.
GENERATION 40: The first time you see this, copy it into your sig on any forum and add 1 to the generation. Social experimen

Is there nothing related to Julio César and the dictatorships in patch 1.3?

Searry said:
Rome is way too strong and thus, boring. I think this is the wrong approach.
Click to expand...

So strong the AI never makes it out of Italy.

That's all very nice but it still kills my immersion if i conquer all those provinces and assimilate them in to roman culture and they still keep beeing wooden huts on the map.

This does look cool.

Cool, but will these missions stay valid if the republic becomes an empire?

Anything we will be able to do to speed up the demotion (or promotion) of Tribesmen? Seems to take forever and there is not a lot you can do about it.
Toggle signature
Tall Tales, a Tall France mini-AAR

Chopmist said:
will allow Rome to demand tribute from her old rival
Click to expand...

I must ask, is it planned to demand gold in peace deals ever again? Have you found a way to balance it?
It feels very strange to only have it as a unique mission reward for one country in the game.
Toggle signature
My mods: Fullscreen Barbershop for CK3, Better UI for Imperator, Elegant Galaxy for Stellaris
D

This looks awsome. However I'm worried that you are forced to replay history and dont make your own.

So the mission trees "the Matter of Magna Graecia" and "Pearl of Italia" showcased in a previous DD have been removed?
I have to say, I'm a bit disappointed. I really liked the balance between conquest and infrastructure in the Carthaginian missions, I know Rome is the ultimate conqueror in this time period but it was also all about building, administrating and internal struggles to adress. I hope Rome will get more mission trees in the future (one of the advantages of this mission tree system compared to the one in EU4 or the focus trees in HoI4 is that you can easily give more love to a faction already covered in a previous dlc) for taking care of internal matters, and also get a few additional conquests (Germania, Arabia Felix, Persia, but more importantly Dacia and Britania come to my mind).
B

How well is this guiding the AI now? Are they sucessfully aiming for the outcomes required from each tree?

With the nod towards procedural missions given in previous DDs, are these mission trees unique to the Rome tag or are they something that will emerge for other states with similar circumstances? Do they update based on the state that each successive region finds itself in by the time you start that tree?

Temudhun Khan said:
So the mission trees "the Matter of Magna Graecia" and "Pearl of Italia" showcased in a previous DD have been removed?
I have to say, I'm a bit disappointed. I really liked the balance between conquest and infrastructure in the Carthaginian missions, I know Rome is the ultimate conqueror in this time period but it was also all about building, administrating and internal struggles to adress. I hope Rome will get more mission trees in the future (one of the advantages of this mission tree system compared to the one in EU4 or the focus trees in HoI4 is that you can easily give more love to a faction already covered in a previous dlc) for taking care of internal matters, and also get a few additional conquests (Germania, Arabia Felix, Persia, but more importantly Dacia and Britania come to my mind).
Click to expand...