Menu
Install the app
You are using an out of date browser. It may not display this or other websites correctly.
You should upgrade or use an alternative browser.
Imperator: Rome 8429 Bug Reports 3557 Suggestions 2255 User Mods 564 Tech Support 476 Multiplayer 53 After Action Report (AAR)
Show only dev responses

Hello and welcome again to one of the Developer Diaries of Imperator:Rome!


Today I will be talking a bit about how Mercenaries work in the game, as well as some words about the Arabian Peninsula.

Armies came in many shapes, forms, and levels of professionalism, in the era that Imperator:Rome covers, something we to some degree try to cover in the Military Traditions that we have spoken about in previous developer diaries (and which we will return to).

One big difference however is that not all troops fought for the country in which they were born. Then as well as later in history mercenary groups played a big part, such as Cretan Archers, the famous Mamertines and others.

At times Mercenary groups played a decisive part in conflicts, as did their tendency to abandon an employer that could not pay them.

In Imperator Mercenary armies are always present, spread out over the map, using their own banner and the unit graphics of the local culture. As long as a mercenary army is not hired by anyone it will also not count towards the supply limit in the city they are located. Mercenary armies all have their own General, to whom all the troops are loyal. 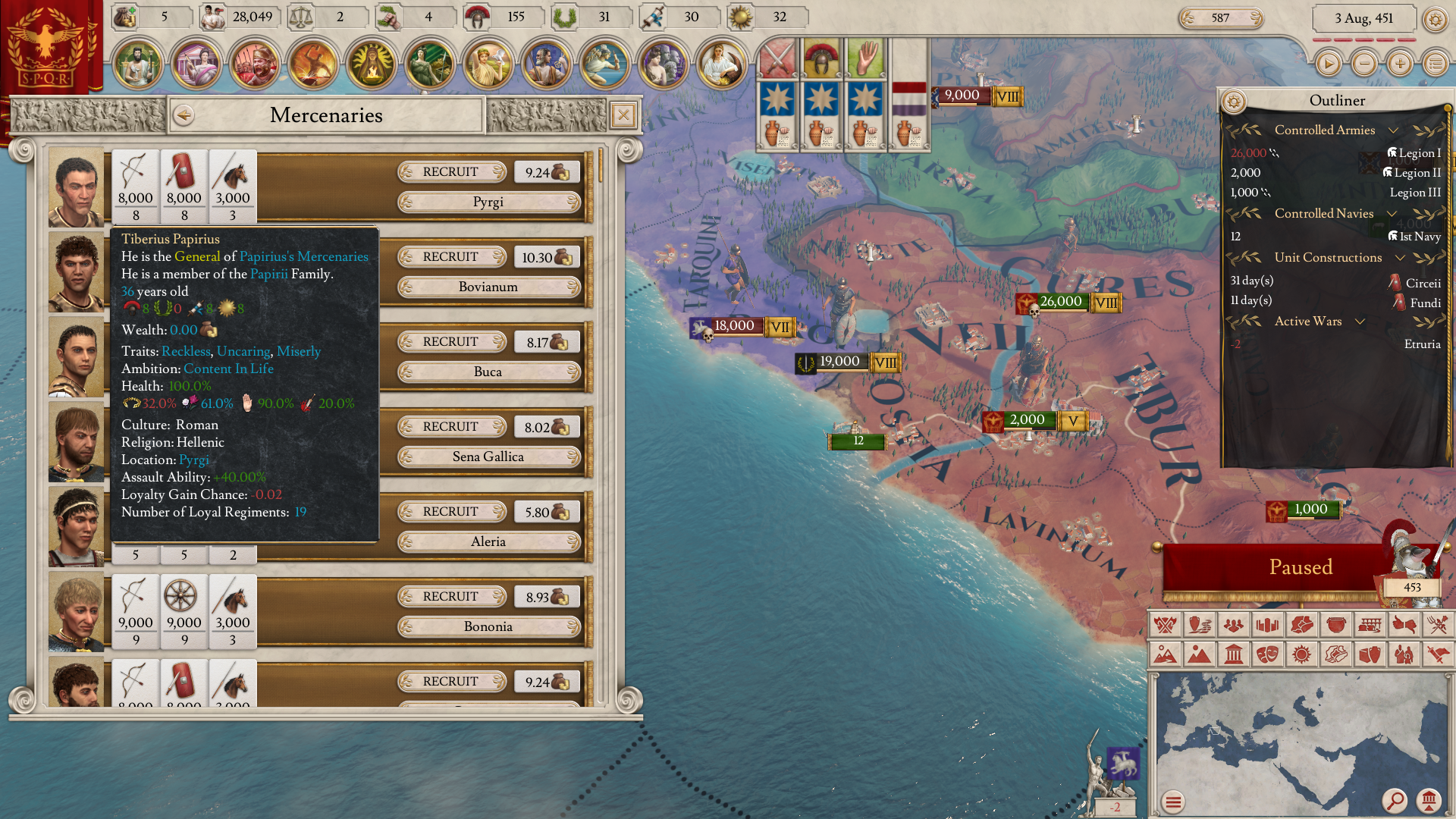 Mercenary Overview Screen. Here you can at all times see what Mercenaries exist (sorted by Proximity) and who has hired them. It also displays the monthly cost of employing each Mercenary group. You can also see Papirius’ unemployed Mercenaries on the map between Rome and Etruria.


Hiring a Mercenary regiment comes at a one time cost of 50 Military Power, but also obliges you to pay their upkeep for the duration of their employment (at a rate 400% more expensive than what one of your own armies would cost).

Any Mercenary company in diplomatic range can be hired, but their high upkeep means that hiring an army far from your conflict could get expensive as you would be paying their upkeep from the day they are hired.

Once no longer exiled, the mercenary army will act as any other army under your control, except for the fact that you cannot remove its leader, or remove any units. They will use your military bonuses, you can alter their deployment and their military tactics.

As with any army you can also disband a mercenary army at any time it is not in battle. Their increased upkeep cost will however also mean that disbanding them can be quite costly.

Once disbanded the mercenary army will again be considered available for hire, and it will begin its journey back to its home location. 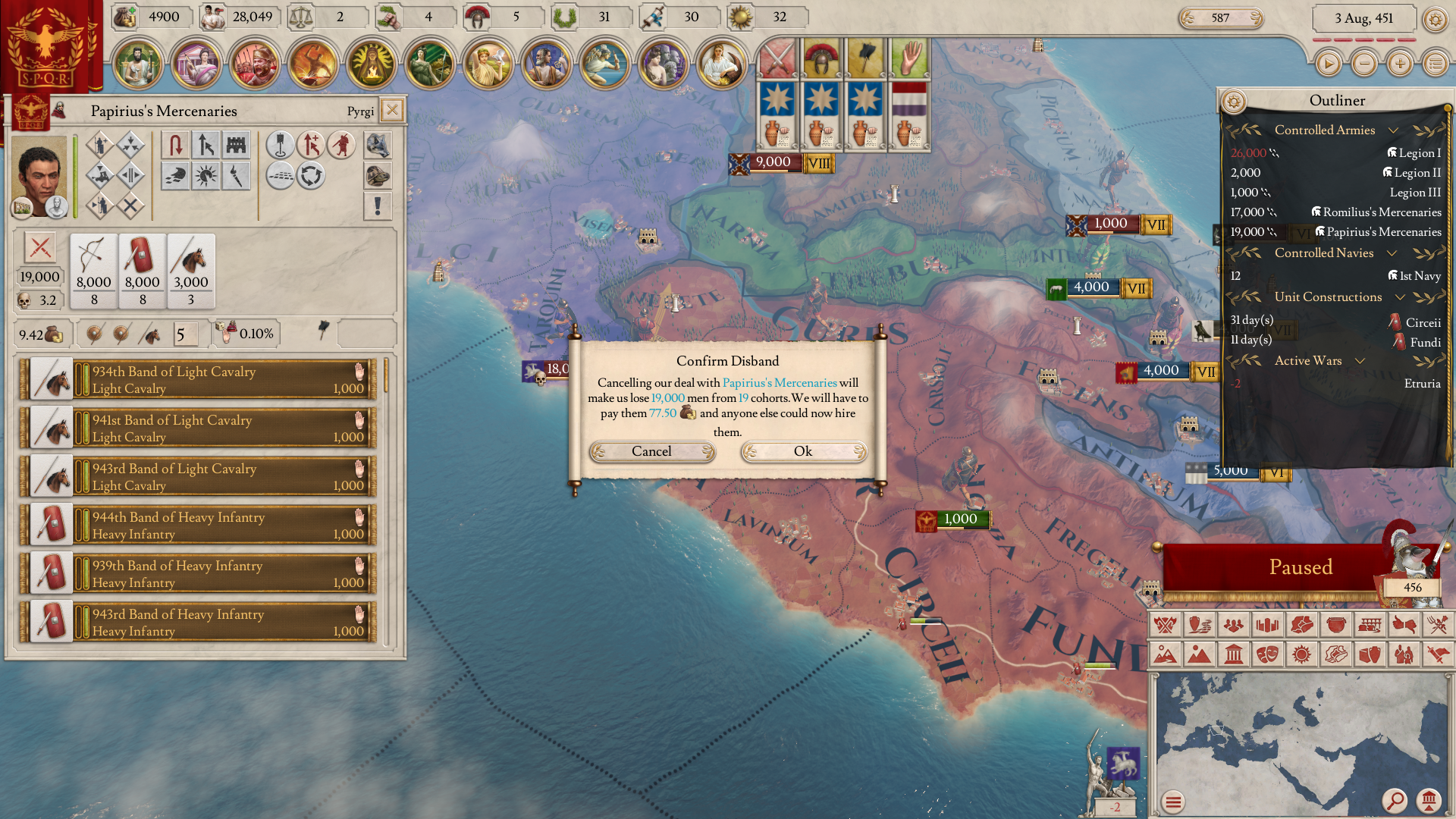 Desertion & Mercenary Princes:​
Mercenaries are not only known for how useful they were to their employers. Men like Pyrrhus and, in his youth, Agathocles, also made names for themselves as Mercenary captains when their prospects at home looked bleak.

Succession and Monarchies is something we will talk more about later but it is possible for the Mercenary company list to be supplemented by characters from the wider game world, such as disenfranchised heirs. 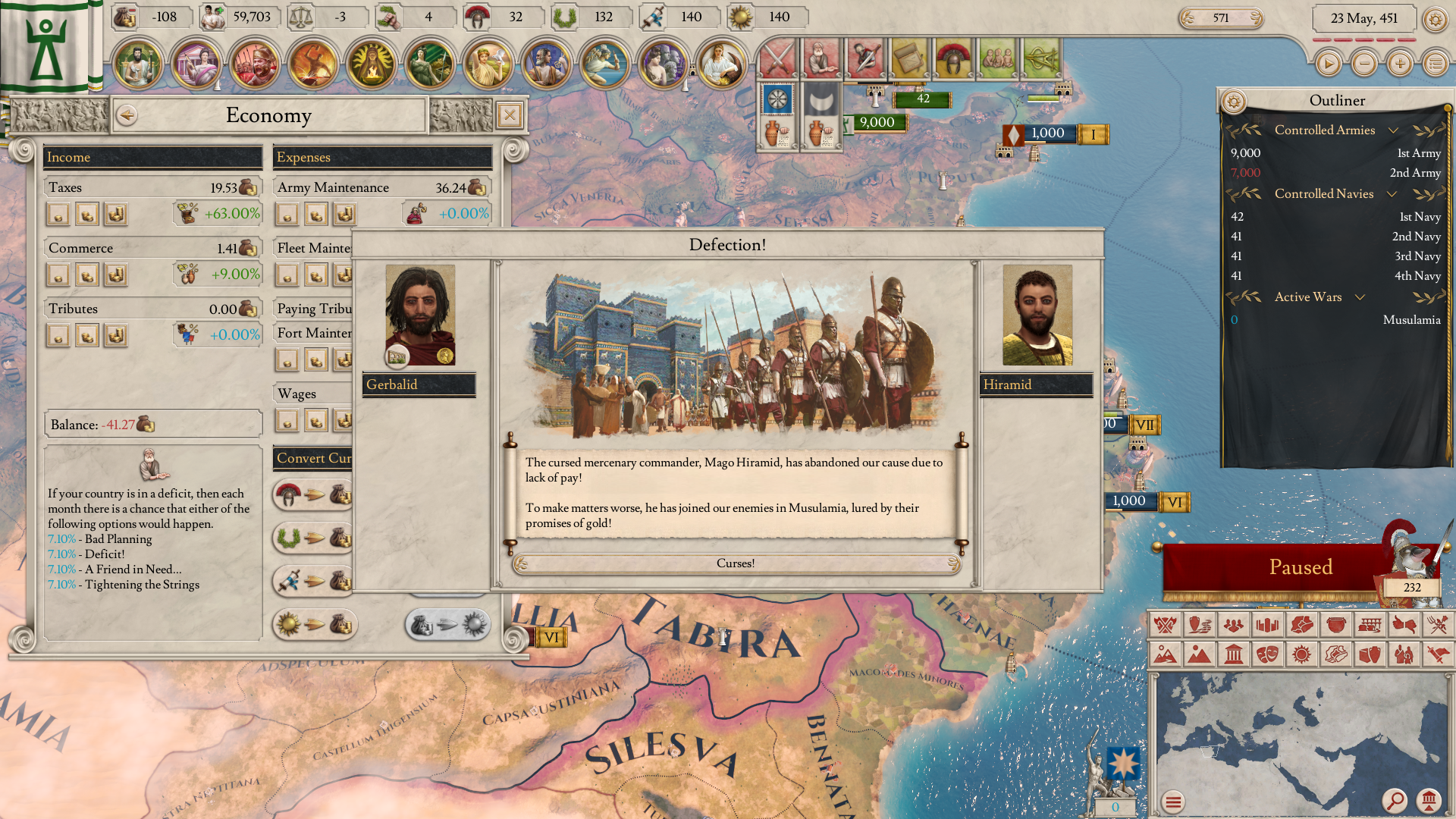 Last of all, should you not be able to pay your mercenaries you may find that this makes them quite unhappy. Among the various possible events that can happen as a result from a negative treasury (as mentioned in the diary on Economy) is that mercenaries might offer to join the opposing side in an ongoing war. 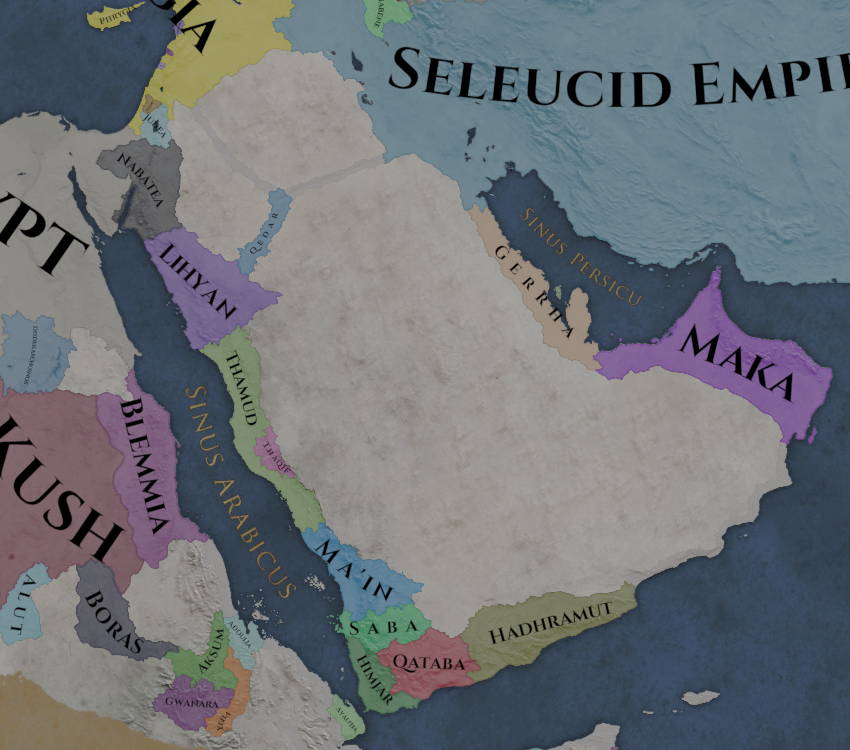 For the map part of today’s diary we are going to be looking to the south of regions we have previously visited. In 450 AUC or 304 BCE, the Arabian peninsula is at the same time isolated and integrated in the Mediterranean world.

The region is closely tied to the trade network of the Indian Ocean, which while not nearly as developed as it would become later, was still ancient by this time.

It is this trade in spices, cloth and incense that brought greek traders and explorers, to the region and eventually led to Roman trading posts on the Indian subcontinent, and it is this trade that is the lifeblood of the more advanced of the Arabian kingdoms. 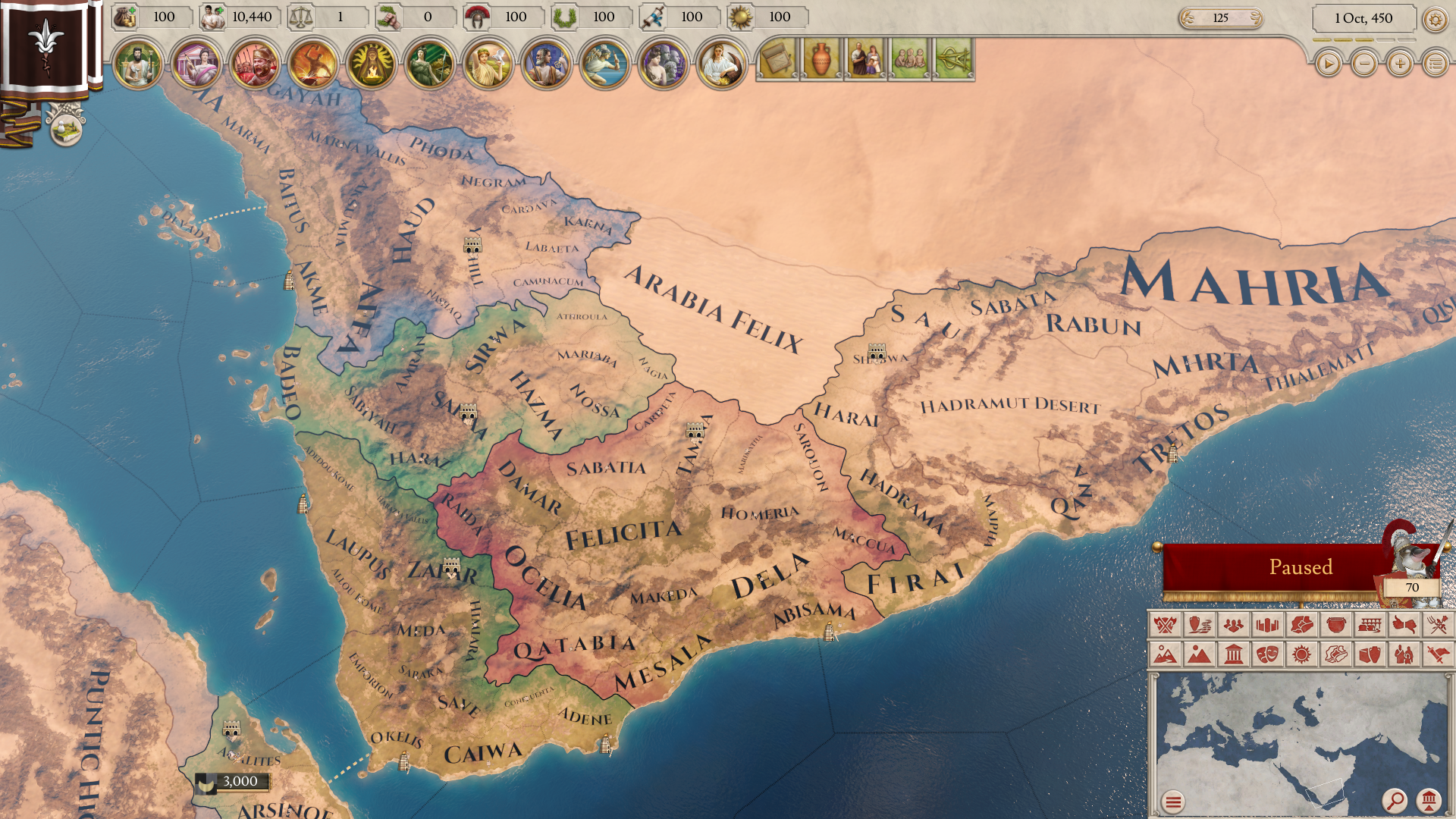 Throughout history southern Arabia has been the more densely populated and more developed part of the peninsula. The temperate highlands provide basis for agriculture and larger cities while the coastline is strategically situated to benefit from the trade flowing between Africa, India and the Mediterranean. This is how the region came to be described as Felicitous Arabia in greek and latin, or Al Yaman in Arabic.

In 304 BCE this region is home to a number of ancient kingdoms, with their own writing, bureaucracy and mode of government. Up until recently this area was dominated by the Sabean kingdom, but it is now divided between a number of smaller kingdoms.

Apart from the Arabian majority this region is by our start date also home to sizable Jewish communities, though these are at the time of our start not in control of any of its states. 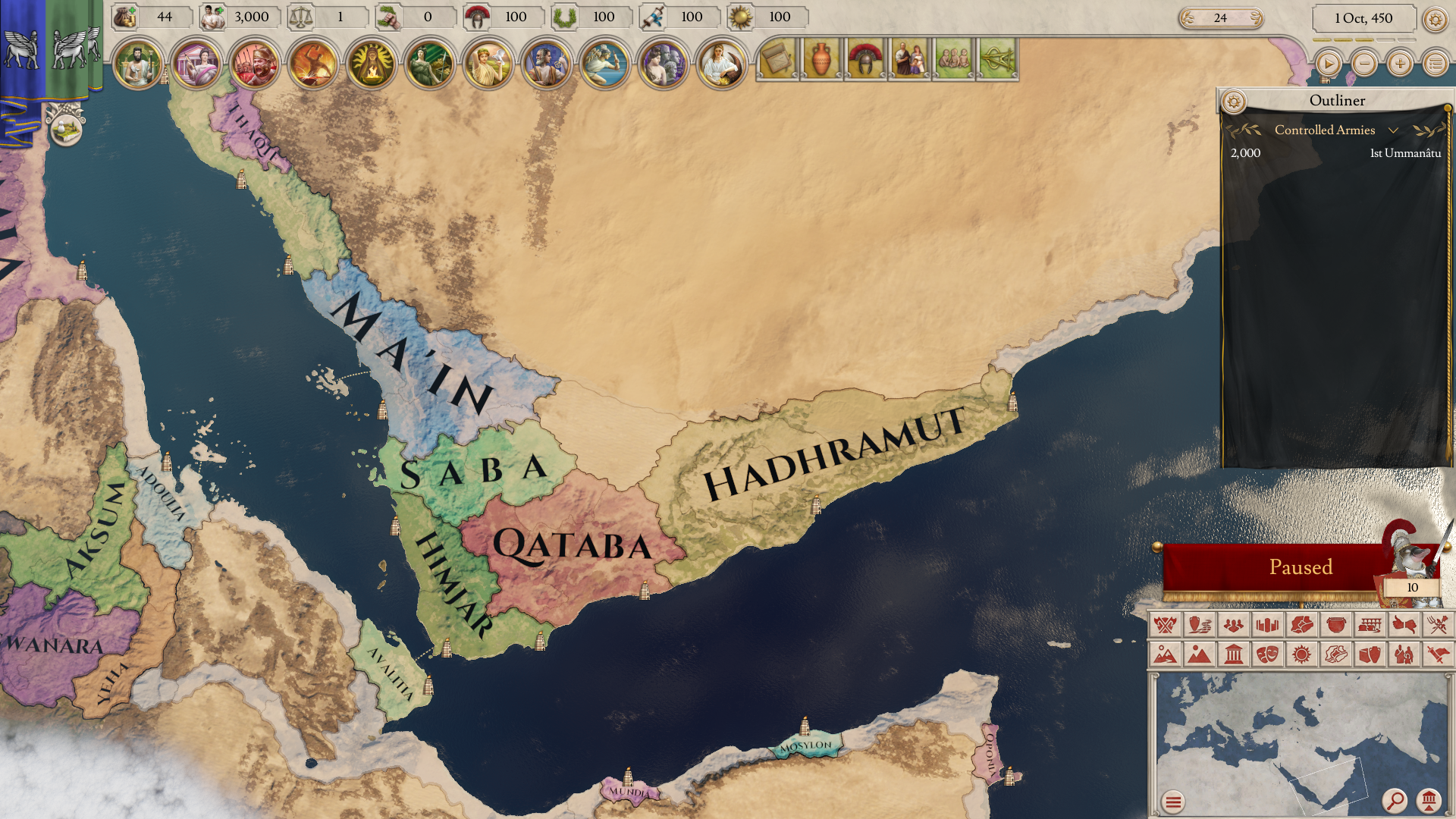 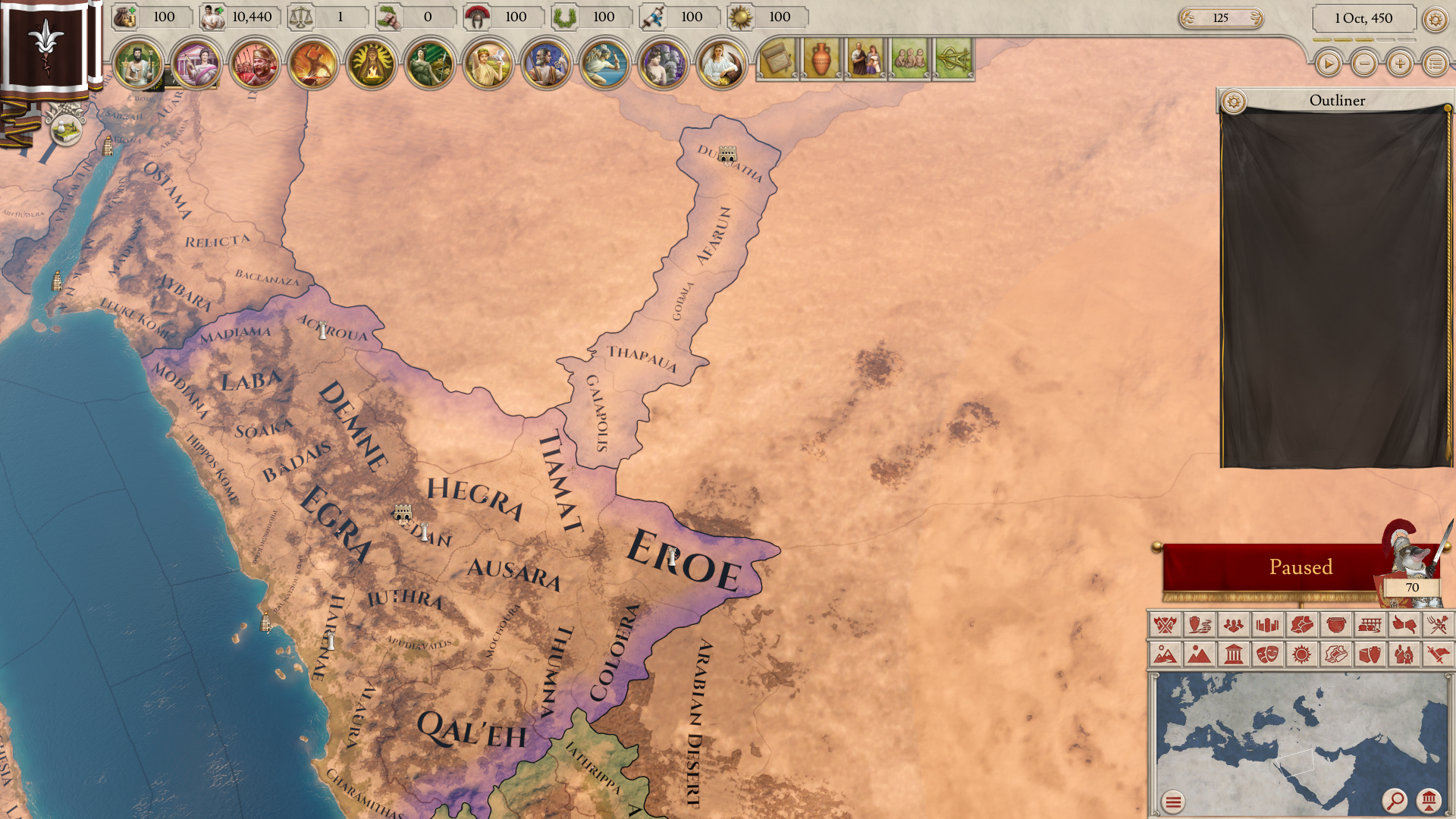 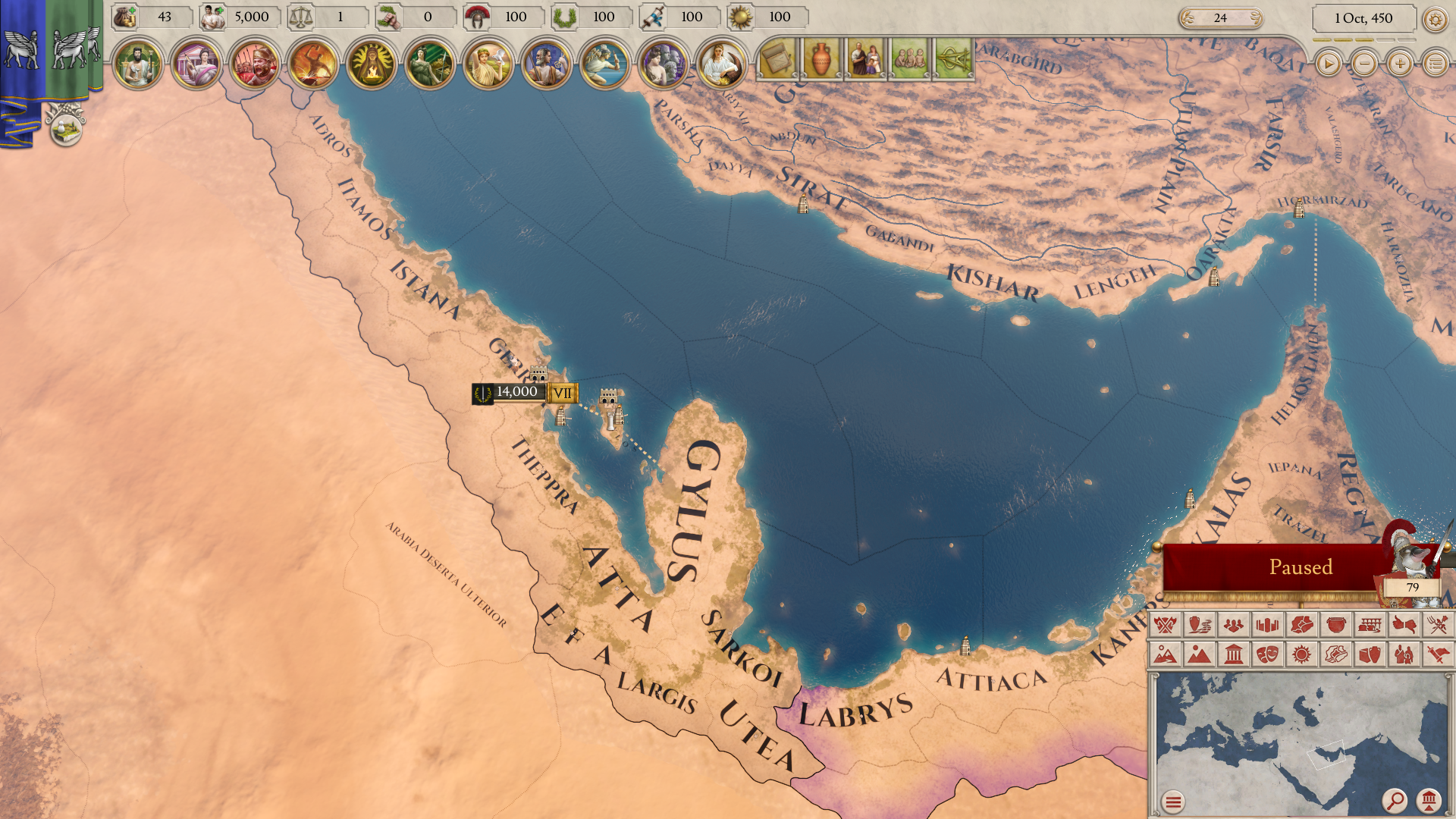 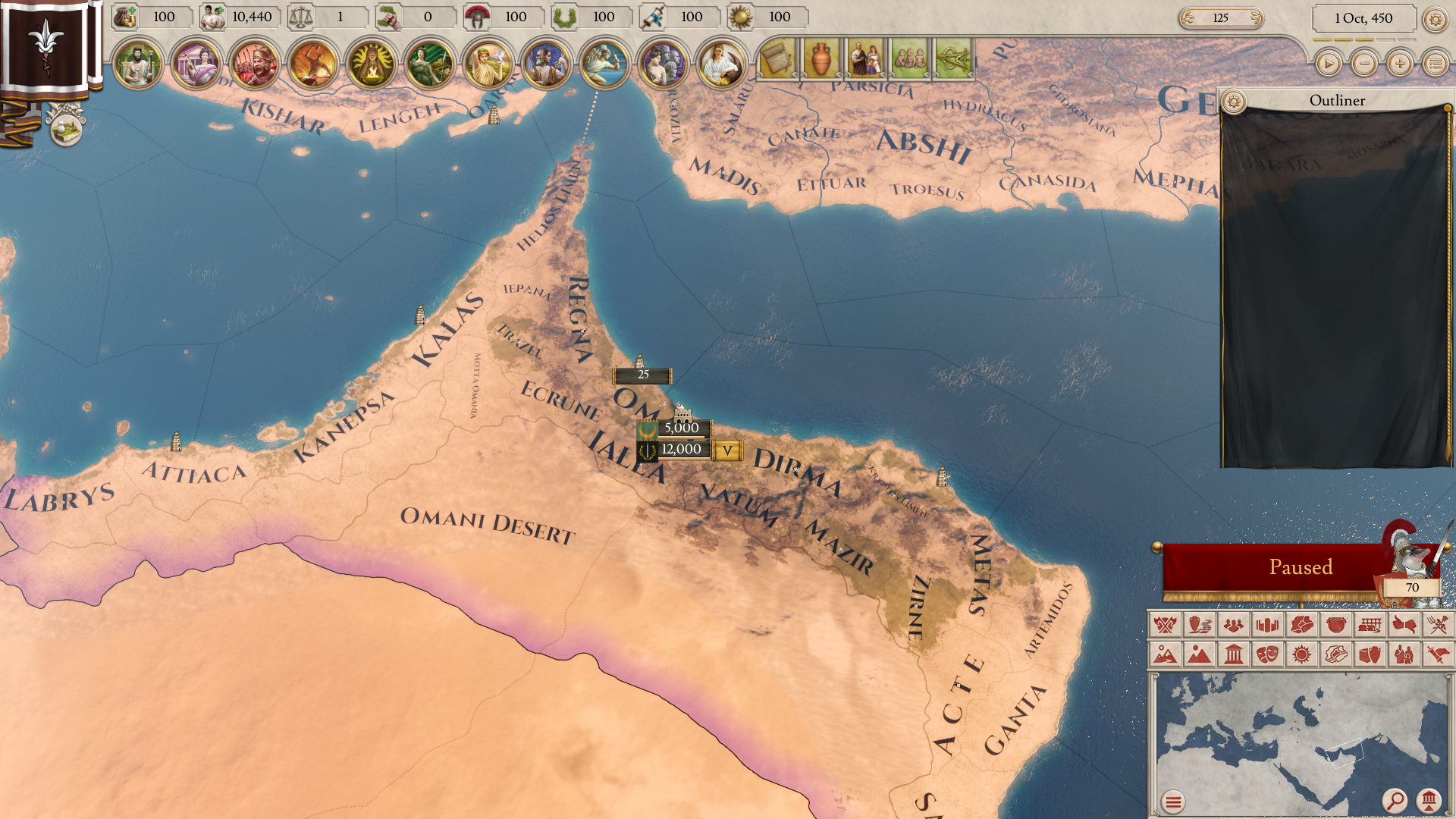 Northern Arabia is not nearly as fertile or settled as the south, it is dominated by the huge Syrian and Arabian deserts, which most peoples have a hard time crossing. The Arab peoples have however made the trade through and around their peninsula their main source of income and their kingdoms can be found all around the deserts.
While never the dominant force that they would become later in history, some Arab kingdoms such as Nabatea, Himjar, and later Hatra and Palmyra, would prosper in a region that was constantly at the edge of the conflicts of greater empires.
Arabian pops are also present far beyond the region where Arabian states exist at our start, opening for the possible formation of more such states in the future in Syria and Mesopotamia. 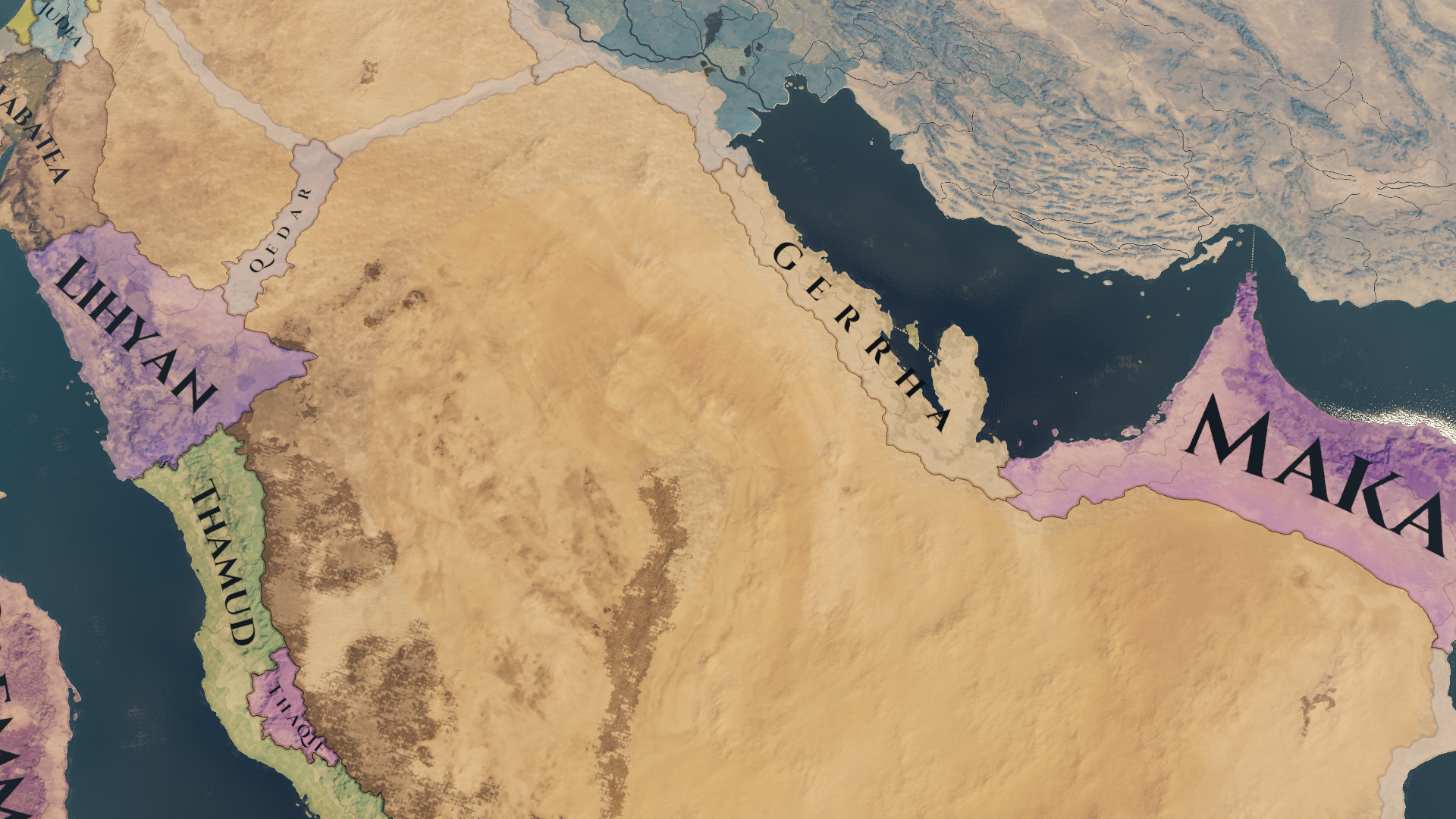 Will it be possible to attack and destroy mercenary armies when they are just hanging around out of employment? And if so whose traditions will they use - their cultures or those of their last employer?
Toggle signature
https://forum.paradoxplaza.com/foru...g-recommendations-list.1164308/#post-25314045 - My reading/watching recommendations for Imperator

Will it be possible to attack and destroy mercenary armies when they are just hanging around out of employment? And if so whose traditions will they use - their cultures or those of their last employer?
Click to expand...

No when they are standing around without being hired you cannot attack them
Toggle signature
No fighting in here! This is the war room!

Interested in the merc mechanics. Is 400% maintenance cost perhaps too much to consider using them, or is manpower really that limited?
Toggle signature
I make Youtube guides for EU4, HoI4, and CK3.​

I think it would be nice if they mercenaries used the traditions of the culture that they are from. Is there a specific reason you chose to use the tradition of the country that hires the mercenaries?

Trin Tragula said:
No when they are standing around without being hired you cannot attack them
Click to expand...

So say I decide to create the Roman Empire, no matter what I do there will always be a big ol stack of mercs chilling in say Campania - even long after war has moved on and I've stopped hiring them and everyone else is too far away? Unemployed mercenary companies that can outlast an empire seems a bit weird.
Toggle signature
https://forum.paradoxplaza.com/foru...g-recommendations-list.1164308/#post-25314045 - My reading/watching recommendations for Imperator

Is it possible to mod in restrictions on who is able to hire specific mercenaries? For instance making a band of Roman mercenaries only willing to fight for countries in the Latin culture group.
Toggle signature
“You see, señorita, mystery is important. To know everything, to know the whole truth, is dull. There is no magic in that. Magic is not knowing, magic is wondering about what and how and where.” - Cortez, The Longest Journey
B

What is the rate at which Mercenaries are being reinforced?
C

We need this in EUIV.

That looks great! Can mercenaries take control of a region if not paid? Like what happened to Carthage at the end of PW2 where Rome exploited the mercs revolt in Sardinia and Corsica and seized them

In Ck2 mercenaries switching sides happen even when they are surroundered by your troops and have no chance to win. For example 1500 mercenaries rebel in 30k stack army which is nothing more than suicide. Will it be different in Imperator? Maybe AI could be tought not to switch sides if it would mean instant anihilation?

Cysiek said:
We need this in EUIV.
Click to expand...

Yes. This and much more things...
Toggle signature
https://forum.paradoxplaza.com/forum/index.php?threads/division-commanders.1368762/

I'm hoping mercenaries would change side during battle or just leave (exile) toward the enemy army to join them.

Will there be a special option to try to bribe mercenary companies to join your side? (maybe a special ability that can be activated only by certain characters and by spending a lot of mil power and money)
Toggle signature
SATOR
AREPO
TENET
OPERA
ROTAS

All of this looks cool. I'm really curious to see India and the Maurya
Last edited: Jan 7, 2019

Shouldn’t mercernary armies have their own unique set of bonuses, rather than simply inheriting ur countries bonuses? For example, in the Gallic wars and his expedition to Britain, Caesar “borrowed” cavalry from his Gaullic Allies because they were far superior to Roman ones.

To me it wouldn’t make sense that a Germanic merc army suddenly were as disclipined as the Roman armies in the field. Is there anyway of giving the merc armies their own set of bonuses?

Great DD! Based on the current balance of the build and your plans for the game at release, do you think it would be feasible for a small rich nation that doesn't have access to special resourced needed to recruit elite troops to make use of only/mostly mercenary armies for its defence?