Menu
Install the app
You are using an out of date browser. It may not display this or other websites correctly.
You should upgrade or use an alternative browser.
Imperator: Rome 8548 Bug Reports 3576 Suggestions 2294 User Mods 578 Tech Support 482 Multiplayer 54 After Action Report (AAR)
Showing developer posts only. Show all posts in this thread.
Show all posts

Hello everyone and welcome to the seventh developer diary for Imperator. This time we take a look at our characters!

The characters in Imperator are deeply detailed, and together with the pops and the politics are part of what makes a vibrant living world.

They have portraits that age gradually, with lots of different ethnicities covering the world.

There are four attributes that characters have.

For those of you that played the original Rome or the Crusader Kings series will not be surprised to hear that our characters have traits. Traits on a character can be gained or lost.


Traits can be categorized in the following categories.
Traits can also unlock a variety of unique event options, each tailored to the specific trait in question. Those of you familiar with CKII will be (dis)pleased to see the return of the Lunatic trait.

A Character also has his or her personal wealth, and four primary stats.

Characters have parents, will be able to marry and get children, just as you’d expect. They can also have friends and rivals.

Characters can be given various roles. Besides being ruler of a country, they could be assigned to govern a province, command an army, handle research or be given a role in the government. Some countries allow women to be given offices, and some do not.


There are lots of different interactions you can do with and on your characters, including arranging marriages, bribe them, loan from them, or even sacrifice them if your religions so permit and desire. There will be a deep development diary on those later in development. 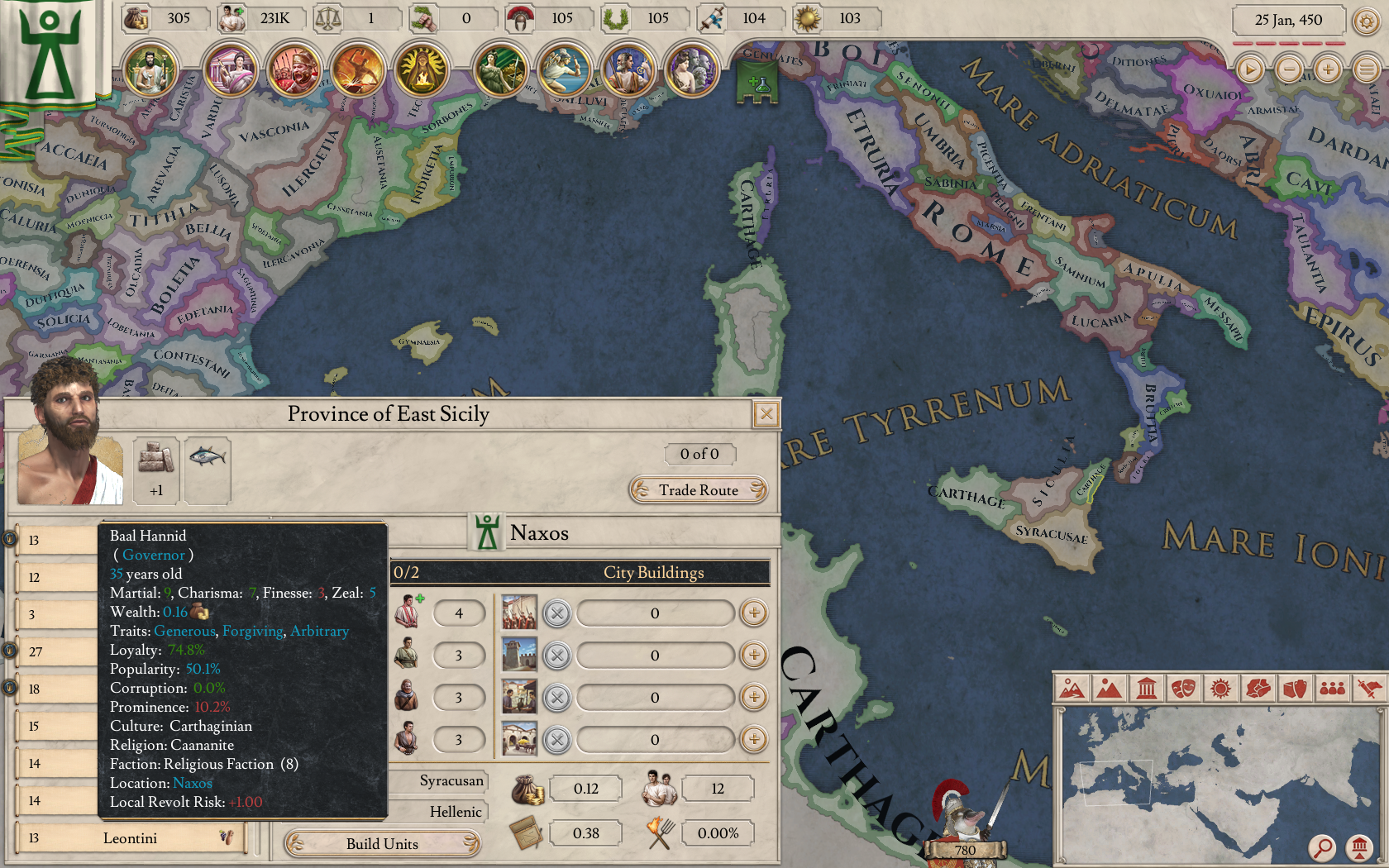 We’ll also talk about the factions characters can be in, what holdings are, and other character related things in future development diaries, but next week we’ll go into trade.
Last edited: Jul 9, 2018
Toggle signature
Johan Andersson
Studio Manager Paradox Tinto - Follow me at Twitter!

Mcwynne said:
Looks nice! How are attributes and traits decided? Are they inherited similar to CK or are they more randomly assigned?
Click to expand...

Some traits are inherited.

Attributes are not inherited, they are not in ck2 either.

Which traits characters get as they grow older is not random though.
Toggle signature
Johan Andersson
Studio Manager Paradox Tinto - Follow me at Twitter!

Samitte said:
Also, seeing the city of Naxos in Sicily in the screenshot, as opposed to Naxos in the Aegean, does this mean we can now have multiple cities with the same name?
Click to expand...

That was always possible. But that said it is something we would like to avoid so as to not confuse people so it might change to something else (Tauromenium?)

Just like today the world in the past was full of some less than original naming for cities. So many Alexandrias, Aphroditopolises, Neapolises, etc...
Toggle signature
No fighting in here! This is the war room!

Puking Panda said:
So far it seems that we've only been able to see characters with exactly 3 traits. Is this incidental or is there some kind of trait limit?
Click to expand...

There'll be a soft limit, but probably higher than 3.
Toggle signature
You can find my inane, personal ramblings on Tweepus

Puking Panda said:
So far it seems that we've only been able to see characters with exactly 3 traits. Is this incidental or is there some kind of trait limit?
Click to expand...

just what a generated characters gets at start
Toggle signature
Johan Andersson
Studio Manager Paradox Tinto - Follow me at Twitter!

classicist said:
I only noticed now from this DD that there is a problematic tag just north of the Apennines. 'Senonii' should be renamed 'Senones', which was by far the more common form of their ethnonym in ancient sources.
Click to expand...

Most of the tribal nations are being changed to a proper noun. In this case, we'll be using Senonia.

I expect this will displease some, but as we have to display tribes as a map object, rather than an indistinct tribal location, we'll have to make adjustments.

Authors sometimes used this practice when referring to 'the land of the Arverni' - Arvernia, etc.
Last edited: Jul 9, 2018
Toggle signature
You can find my inane, personal ramblings on Tweepus

Cymsdale said:
Finesse is a really odd name for that attribute.
Click to expand...

Personally, I wanted to call them Pulchritude, Pep, Godliness, and Fisticuffery - but I was shot down
Toggle signature
You can find my inane, personal ramblings on Tweepus

princeseth said:
what is the difference between prominence and popularity ?
Click to expand...

Prominence equates to how well known, active, and visible a character is on the national scene.

Popularity is an indication of how much popular approval, said character has.

One could say that Nero was prominent, but I doubt he had as much popularity.
Toggle signature
You can find my inane, personal ramblings on Tweepus

classicist said:
A minor nitpick here: poleis would be a more accurate plural for polis.
Click to expand...

Yes it would, sometimes clarity beats correctness though. I figured this reply was one such time
Also I never studied Greek (unlike Latin) so I am rather restrictive with trying to use proper endings, etc. (I would likely end up looking silly at one point or another).


Cymsdale said:
Finesse is a really odd name for that attribute.
Click to expand...

What would you prefer then?
Toggle signature
No fighting in here! This is the war room!

-Leonidas- said:
Is it possible to disable favours of the gods an other potential supernatural elements? It would be quite nice to have the same choice CK2 offers.
Click to expand...

A zealous person managing to enflame the masses is not necessarily a supernatural event. CK2 does not really turn off piety with that option either
Toggle signature
No fighting in here! This is the war room!

Concinnity?
Toggle signature
No fighting in here! This is the war room!

I am looking forward to this
Toggle signature
"Disclaimer: Numbers stated by Caligula may or may not be accurate to within +/- 100000% of the value" -Creature

Hopefully none of the other tribes either.
Click to expand...

The latter. Marsica is a modern name, not necessarily what the area would have been called in antiquity.

We're used to seeing the tribal identifier as a plural on maps, but this is particularly difficult to work with. 'Marsia' just meant 'the land of the Marsi', thus I see no reason not to use that convention here.

Do you have any sources on this?
Toggle signature
You can find my inane, personal ramblings on Tweepus

Now we know that there will be, at the very least, two women in the game (assuming that these two are different characters).
Click to expand...

There will be plenty of women in Imperator : Rome.

Whilst the rights of women varied greatly from area to area, there are many examples of women holding a great deal of power in Antiquity, even in nations which ostensibly denied them what we would now consider fundamental human rights. Concordantly, a small number of societies, predominantly tribal, seem to have adopted some level of gender-equality. The extent of this is still debated, and reliable sources on either side are particularly hard to come by.

The above statement is based on research into the matter, and contains no intentional bias or agenda. If anyone would like to offer comment on this, I would request that you make your argument with the same intention.
Toggle signature
You can find my inane, personal ramblings on Tweepus

the ancient Italic tribes come first of all from north and many before settling retained a certain degree of light features, the predominant ethnic type that made the upper classes of Rome .
For example there were even a whole tribe named "the blond ones" ( Rutulians) .
With the expansion Rome inglobated many other territories, and non Italic tribes as well with time , invasions and slavery the number of Roman citizens increased and slowly started to include people with darker hairs.
Click to expand...

The initial origins of the Italic tribes are likely to have been the gradual migration from the Yamnaya culture somewhere in the eastern steppe (Haak et al) several thousand years before the game begins. A reliable indicator of this (Busby et al, 2011) is the spread and distribution of the R1b haplogroup. This of course doesn't preclude the existence of fair haired and skinned Romans - but the likelihood of them somehow having originated from germanic or scandinavian territory, is low.

BootOnFace said:
What does the "Ancient Romans were Aryan" argument have to do with this dev diary?
Click to expand...

Very little. Good points were made, so I’d appreciate it if we could all (myself included), move on from the topic.
Toggle signature
You can find my inane, personal ramblings on Tweepus