Jump to latest Follow Reply
Menu
Install the app
You are using an out of date browser. It may not display this or other websites correctly.
You should upgrade or use an alternative browser.
Imperator: Rome 8727 Bug Reports 3609 Suggestions 2352 User Mods 606 Tech Support 487 Multiplayer 55 After Action Report (AAR)
Show only dev responses

Hello again!
As previously hinted today's diary will cover both the Greek Military Traditions and the general setup at the start of the game in the larger Greek region. We will return to other parts of the Greek world in future diaries. I will also start with a few words on the Diadochi and the Greek world at large at our start.

The Wars of the Diadochi:​ 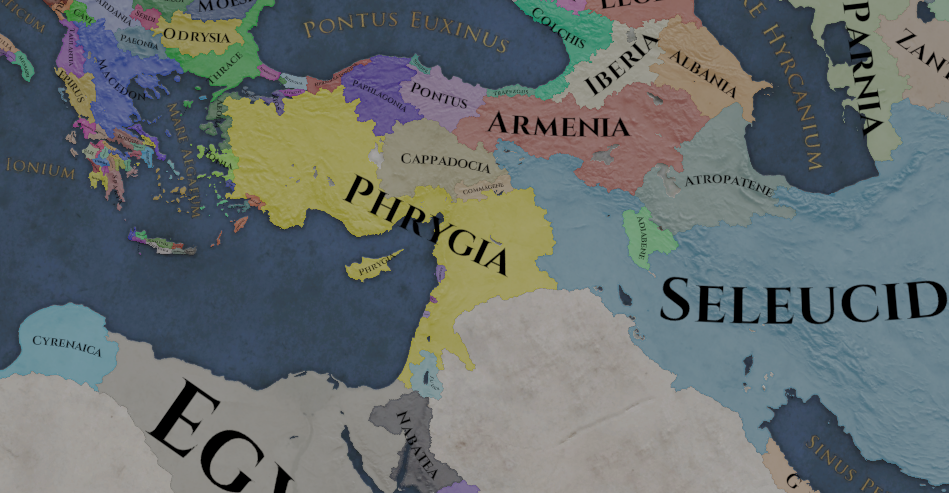 As we move on to the eastern part of the mediterranean we approach what is perhaps the main conflict of the early part of Imperator:Rome, a conflict that does not involve the promising Republic in Italy at all.

In 334 BCE, a few years after the first Samnite War and some 30 years before the start of the game, Alexander of Macedon crossed the Hellespont and invaded the Persian Achaemenid Empire. Alexander would in short order conquer the empire in its entirety, and soon his rule extended from Greece and Egypt in the west, to the Indus river and Ferghana valley in the east.

However in 323, aged only 32, Alexander would die suddenly, in the city of Babylon.

After some consideration the generals present in Babylon itself proceeded to divide the empire between them in anticipation of one of Alexander’s heirs coming of age.

Almost immediately hostilities would break out between these successor rulers, a series of conflicts that would last far longer than the original campaign to conquer the empire by Alexander himself. The story of this great conflict could fill many developer diaries, and involve everything from securing Alexander’s widows, children, siblings and even his body itself, to treachery, assassination, and unlikely reversals of fortunes. This is a period of some of the most spectacular sieges, naval engagements and land battles of the ancient era. At our start in 304 BCE this conflict is still ongoing, the remaining factions are headed by Cassander in Macedon, Lysimachos in Thrace, Antigonus in Phrygia, Ptolemy in Egypt and Seleucus in Persia. There are no longer any remaining potential heirs by blood to the empire, and so these remaining generals have all begun proclaiming themselves kings in their own right. History knows them as the Diadochi, or successors.

Rather than retelling the wars of the Diadochi in their entirety we will get back to them when we focus on the various regions that the Successors rule at our start.

This diary is going to focus on the geographical region of Greece, in some ways at the periphery of the conflict, but in others at its very center. 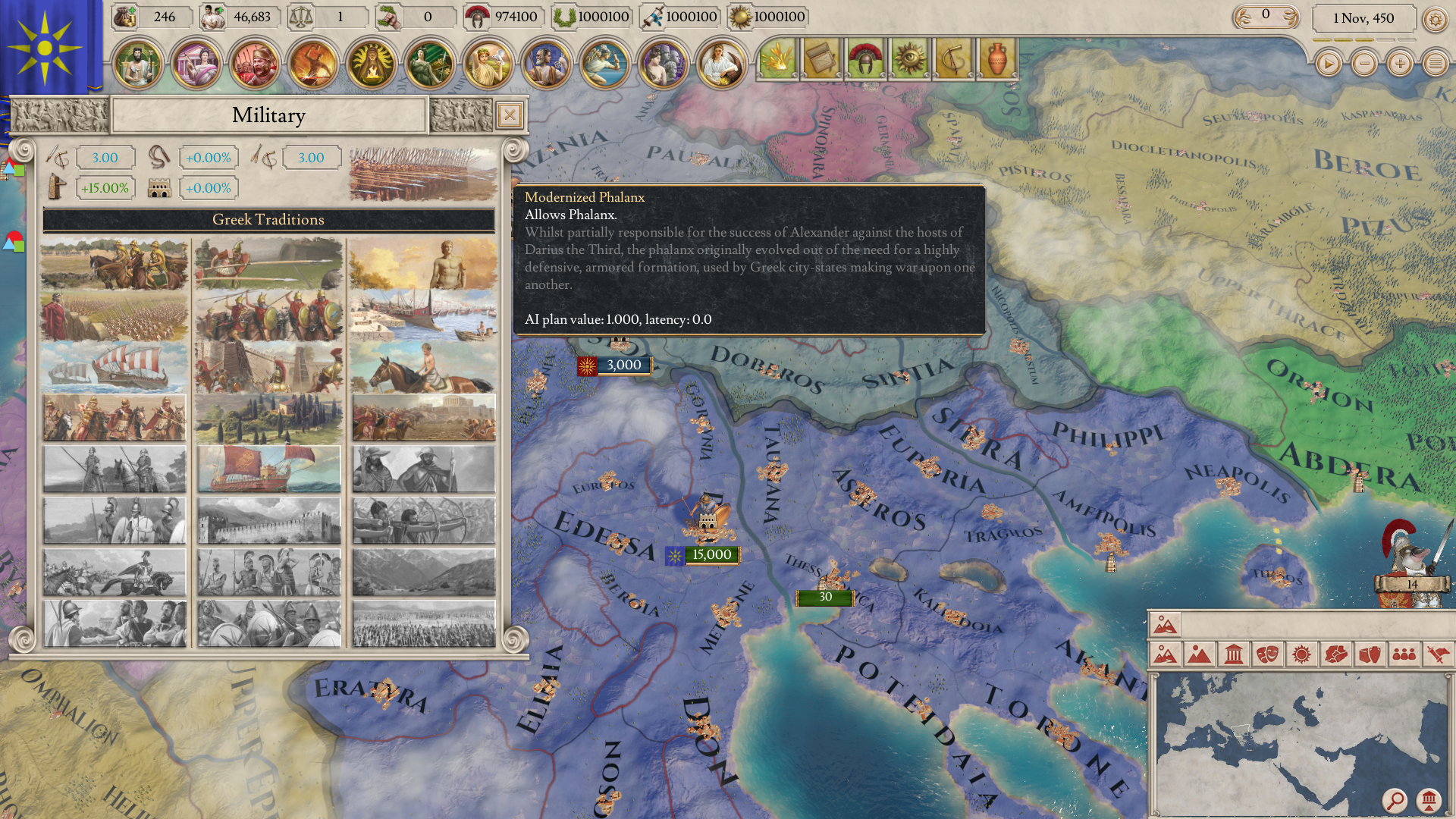 Greek Military traditions will be used by all countries with a Greek culture as their state culture. Including all of the mentioned Diadochi kingdoms. Like with all Military traditions there are three different paths but you can choose to progress down either one at any time you unlock a new tradition.

Like with most things we show you numbers are still subject to change. The names for the paths are also not to be taken too literally. They are never shown in game and are just rough categories for us to work with internally.

The Greek can unlock 3 abilities. Raid City, and Border Forts are also present in the Italic Traditions.
In addition the Greek Military Traditions also unlock the Cavalry Skirmish ability. This is a togglable unit ability that increases damage dealt by Light Cavalry and Camelry, while also increasing the damage they take themselves.
Overall Greek Traditions provide a range of different bonuses to Infantry as well as a sprinkling of Cavalry and naval bonuses depending on what you prioritize. 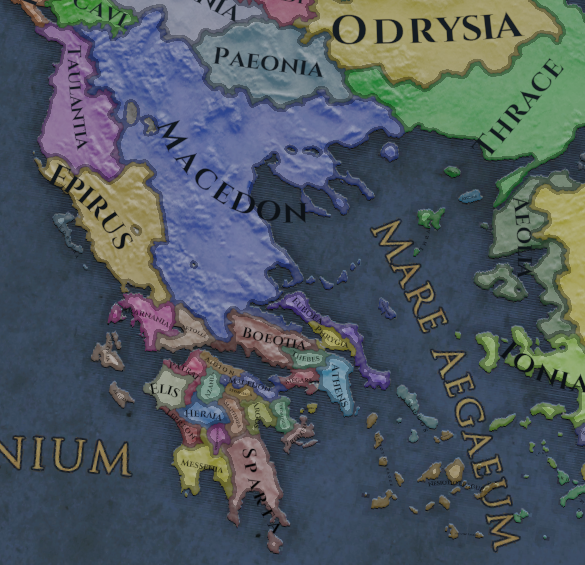 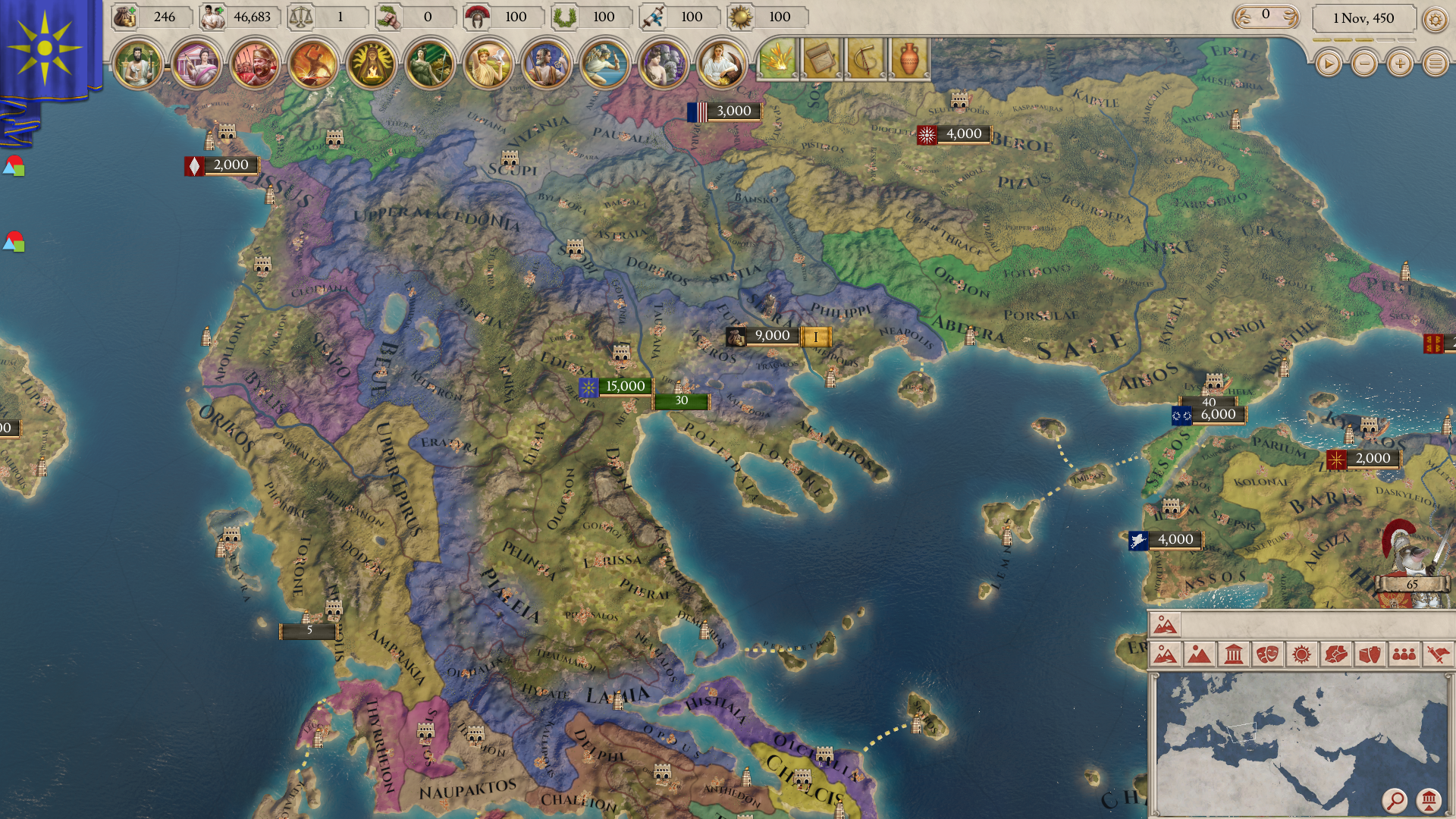 At the time of Alexander’s death Macedonia and the cities of Greece were entrusted to Antipater, one of his oldest and most experienced officers. A few years later Antipater was even declared the regent of the (by then rather theoretical) empire, and entrusted the care of the presumptive heirs to the empire, Alexander’s son Alexander and his incapable brother Philip.

Quite an old man, Antipater eventually transferred command of Macedonia in 319 BCE to another general, Polyperchon. His eldest son Cassander, himself a veteran of Alexander’s conquests, saw this as a threat to his own ambitions and allied with the enemies of his father. Eventually taking over Greece and Macedon by force. Well in control of Greece, Cassander would find that his father’s enemies soon became his own. 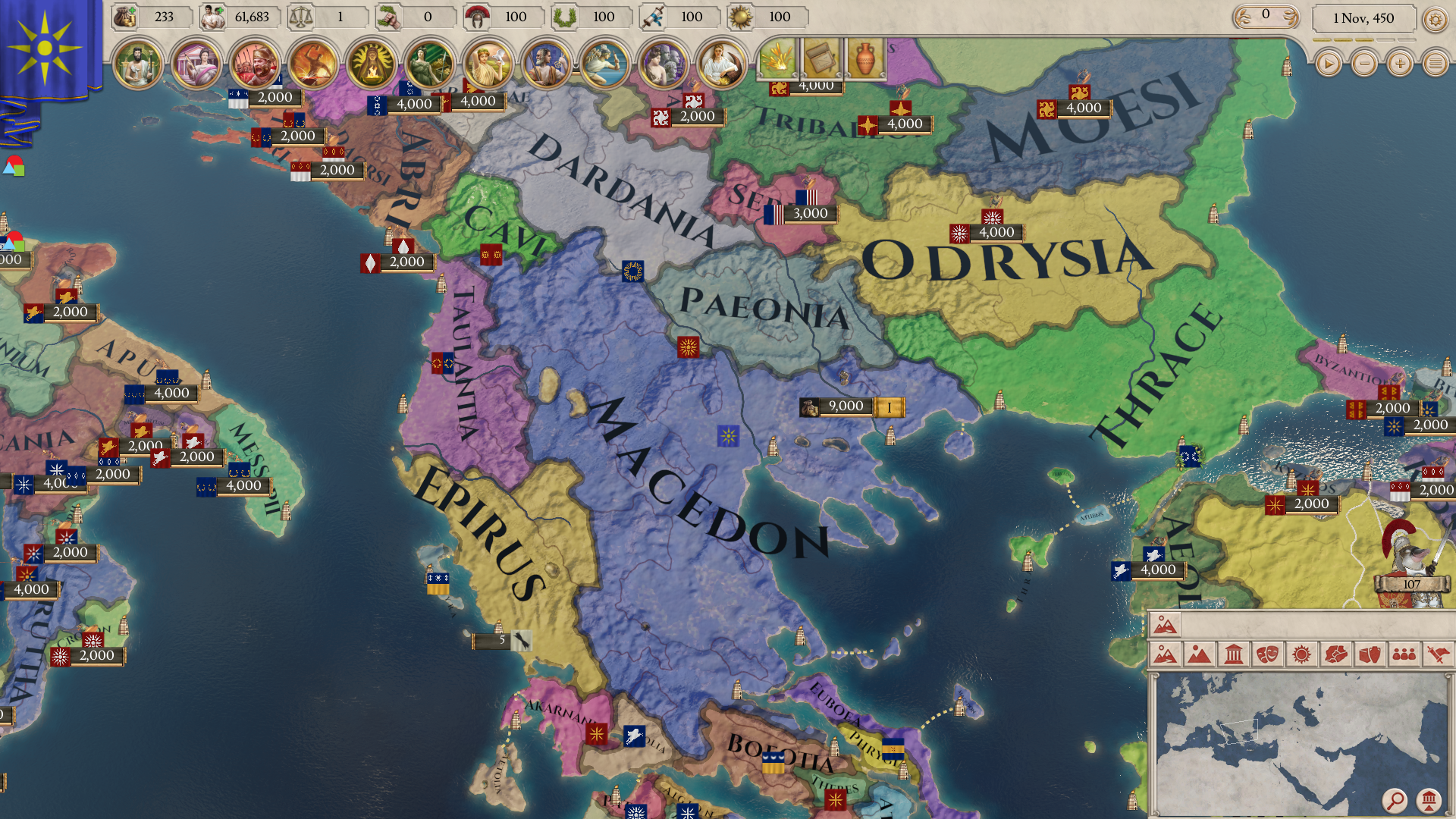 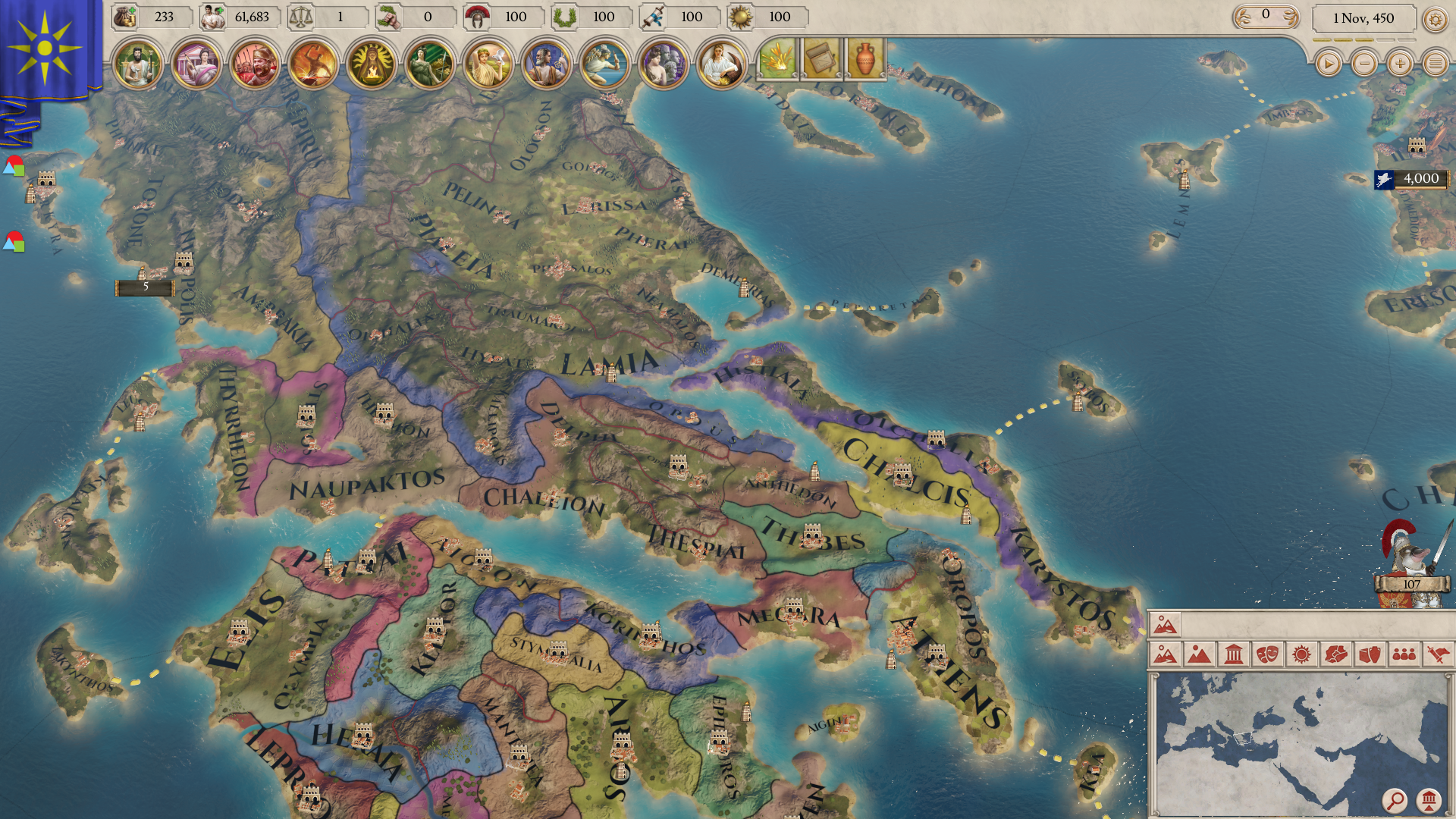 Greece may be far from the center of Alexander’s Empire but it is also extremely central to the wars of the successors. For a Hellenistic King the cities of Greece represent a political capital that few places in the world can match. They also possess considerable commercial wealth and could be a great source of manpower for the ever expanding armies of the Diadochi.

Cassander’s strategy in Greece has been to garrison the cities and place his own men in charge of important ones, such as Athens, or the great fortress of Corinth. This strategy has been quite unpopular with the Greek cities themselves but it has allowed him firm control over the many disparate factions and leagues in the region.

At the start of our game, Demetrius, son of Antigonus and co-king of our Phrygia has just landed with a big army in the Macedonian stronghold Chalcis, in central Greece. Fresh from the siege of Rhodes and conquest of Cyprus, his reputation precedes him. This is also not the first time that he is campaigning in Greece. Thus, when Demetrius promises freedom to all Greek cities many immediately drop the allegiance to Macedon and join his cause.

As our game starts, Cassander and his armies have quickly fled north while Demetrius is now consolidating his hold over Athens and Boeotia. As winter approaches there is a cessation of active hostilities of sorts, but it is not one anyone expects to last. 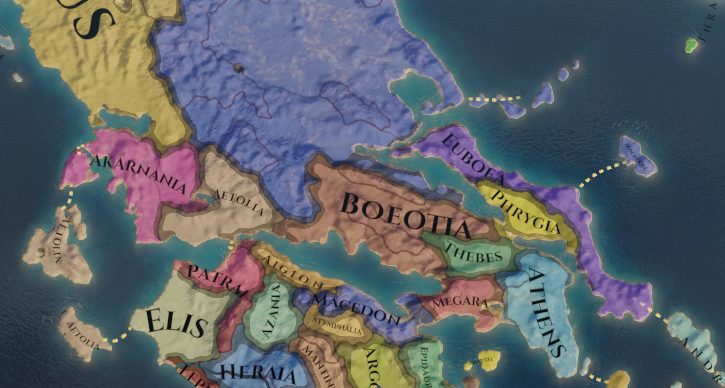 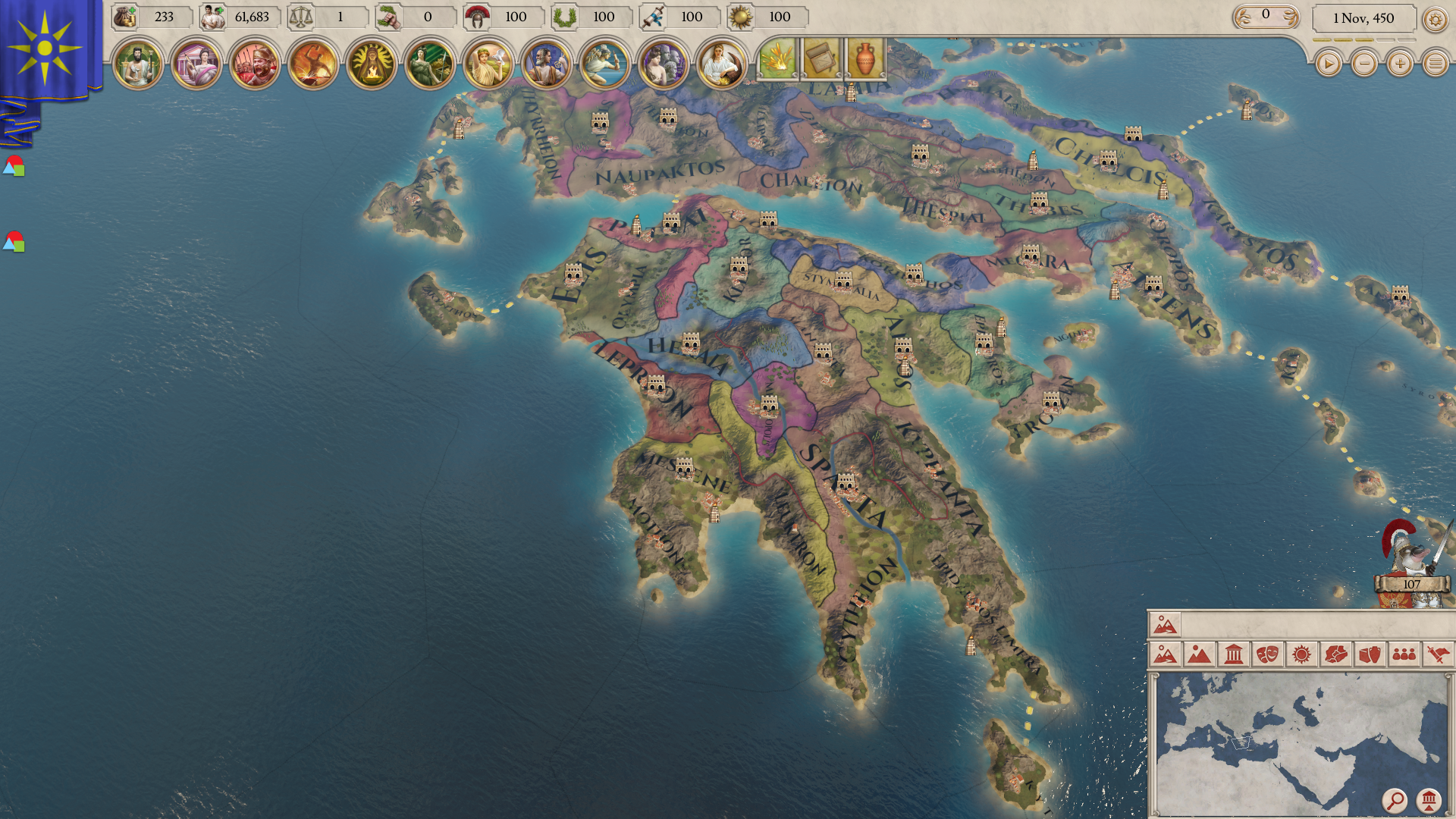 The mountainous peninsula in southern Greece is home to a great number of small city states. Macedonian overlordship is in living memory but the region was almost entirely freed by the Antigonid alliance in previous wars. Polyperchon, the Antigonid General in charge of the region, recently defected to Cassander and left the region to bring Alexander’s brother to Macedon.

The Peloponnesian cities largely remain independent and ungarrisoned ever since Polyperchon left. On the entrance to the peninsula from the north lies the city of Corinth, and its huge fortress, the Acrocorinth, which is still in Cassander’s hands. A small number of city states, primarily around Argos, have also remained loyal to Macedon out of their own interests. 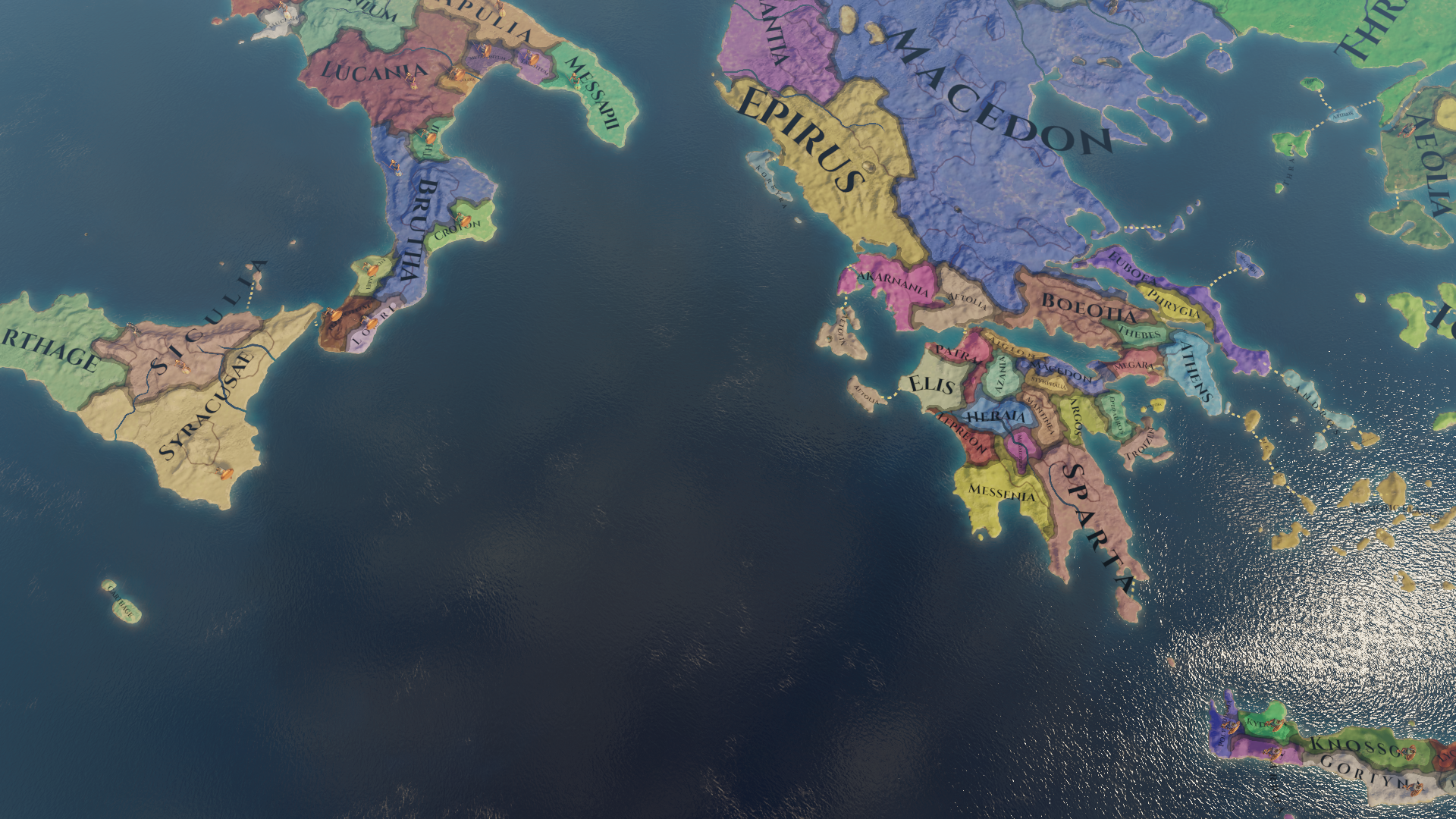 Starting Countries:​
That was all for today.

There are still many more things to cover, both the in the Greek world and elsewhere. Next week I will be back to talk about Religious Omens, as well as perhaps another thing or two about the starting setup.
Toggle signature
No fighting in here! This is the war room!
Reactions:

Is this dev diary come from next week?
Because today id November 5th

But today's 5th of november!
Toggle signature
My suggestions about 1066 and 867 Iberia (Crusader Kings 3)

ANFW said:
Is this dev diary come from next week?
Because today id November 5th
Click to expand...

Nah it's just me being confused about the calendar

Should be fixed now.
Toggle signature
No fighting in here! This is the war room!

What is feudatory (other than type of vassal I assume)?

Does that mean that there will be dual kingship after all, @Trin Tragula ?

(Excellent DD, by the way: by far the best in my opinion!)
Toggle signature
Check out my two total overhaul mods for EU4 v1.12.2, both set in the ancient era!

We found a secret feature about time traveling in this DD
Toggle signature
The sole developer who is responsible for the modern-day open-world supernatural RPG called [NEOLITHIC] on Steam.
Can you find this secret game?

Knight of the Swedish Volvo order

Cool. Near east next!

Does that mean that there will be dual kingship after all, @Trin Tragula ?

(Excellent DD, by the way: by far the best in my opinion!)
Click to expand...

It does not. In this case I would actually not see a strong case for it either. Antigonus did name Demetrius co-king but it was to make sure he was the designated heir, there was a clear hierarchy between the two.
Toggle signature
No fighting in here! This is the war room!

Jesus that's a lot of tags in the Greek region alone. This game is going to be insane

Darth. said:
Jesus that's a lot of tags in the Greek region alone. This game is going to be insane

Numbers are in general subject to change still
Toggle signature
No fighting in here! This is the war room!

Your regional previews are great

Please, can you say a little about how mercenaries will work?
They will be similar to eu4 (you recruit single units) of more similar to ck2 (you recruit a full company at a whole) ?
Click to expand...

Will talk more about them at a later time
Toggle signature
No fighting in here! This is the war room!

Well yeah, but that's still a lot, unless discipline values can be far higher here than in EU4
Toggle signature
Pssst hey kid, you want some DLCs? First one's free

"You have the vote of every thinking person."
"That`s not enough, we need a majority."

Darth. said:
Well yeah, but that's still a lot, unless discipline values can be far higher here than in EU4
Click to expand...

Discipline only increase damage in Imperator: Rome, it is no better than offensive, probably worse actually because discipline is mentioned to be recieved from innovations.

You're missing *new paragraph* "Stymphalia: " in the the middle of the Azania paragraph.
Should be like this: