Hello everyone, and welcome back to another development diary for Imperator. This time we’ll talk about the resource system in the game

First of all, we have gold which you gain from tax and trade, and spend on development and military. The second resource is manpower, which is required mostly for building and reinforcing armies.

There are also four other types of resources, which do not scale with growth, but instead act as a great balancing tool against snowballing always being better.

These four resources, are referred to as power. There are four types of power in Imperator, each corresponding to a character attribute . Each with their own use and benefits.

You primarily get power from the quality of your current ruler, but there is also a bonus in monthly power for having your national ideas match the categories your government want ideas in.

The first power is the Military Power, which represents the ‘Virtus’. This is based primarily of the martial abilities of your ruler. Military power is used to get new military traditions, inspiring devotio, as well as all unique unit abilities.

The second power is called Civic Power, which represents ‘Gravitas’, and is based primarily on the finesse attribute of your ruler. You use civic power to get inventions, set up trade routes, and moving your pops about, amongst other things.

The third power is the Oratory Power, which represents the ‘Dignitas’ This is based on the the charisma attribute of your ruler, and you spend this power on Fabricating Claims, Improving Relations, Enacting Laws, Endorsing Parties and many other things where a silver tongue is useful.

The fourth and final power is Religious Power, also known as the ‘Pietas’. This is based on the zeal attribute of your ruler. Some of the things you use religious power on is to stab pigs, convert pops and call omens.


Then there is lots more of abilities and interactions, that may or may not use a combination of power to use, but your technology progress is depending on your citizens output, not on your spending of power. 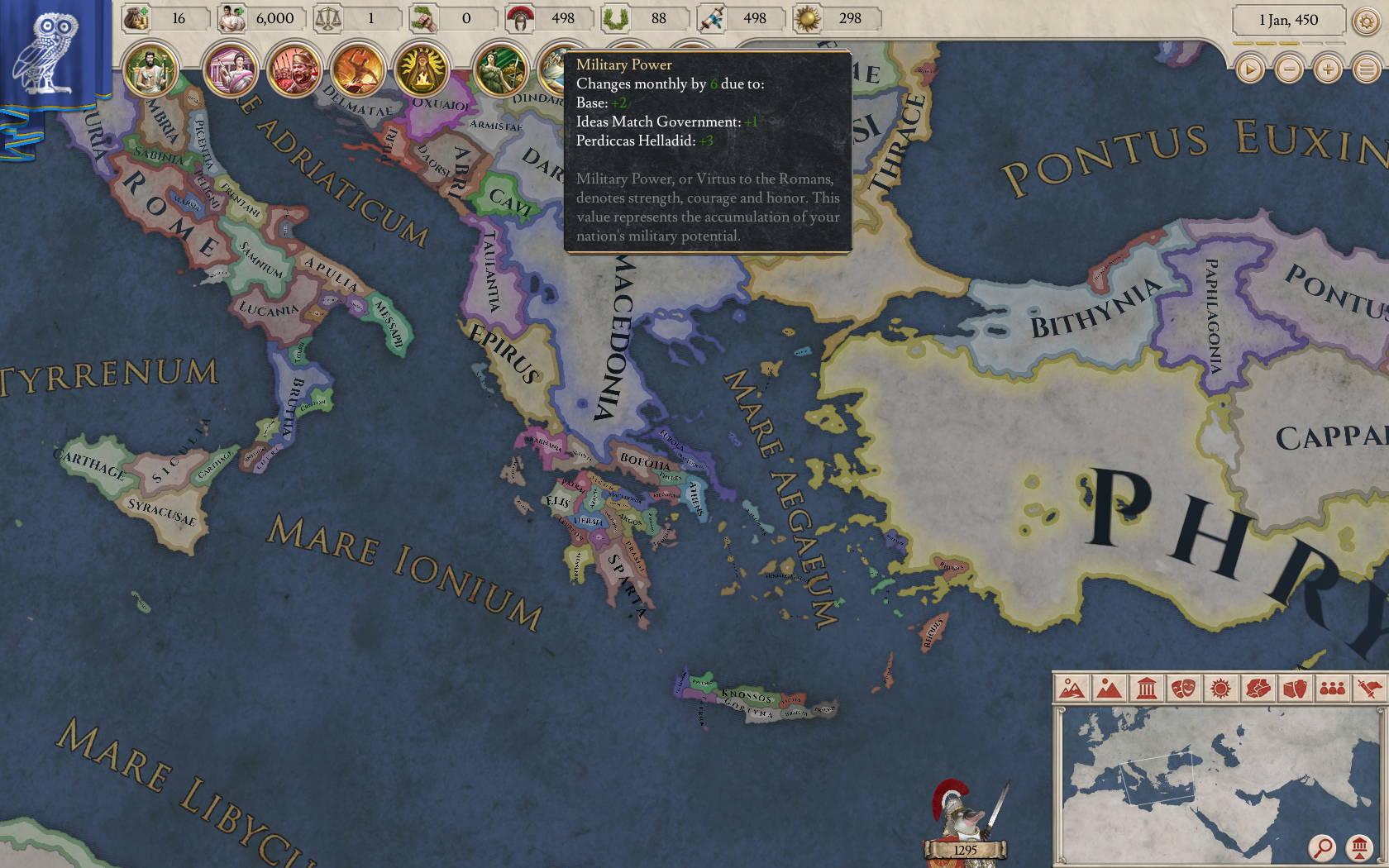 Next week we'll take a look at the units of Imperator!
Toggle signature
Johan Andersson
Studio Manager Paradox Tinto - Follow me at Twitter!

Johan why do you wake up so early?
Toggle signature
Byzantine.Hellenistic.Ottoman.Sogdian​

lucaluca said:
Johan why do you wake up so early?
Click to expand...

early? I'm off this week and slept in.. didnt wake up until 6.30
Toggle signature
Johan Andersson
Studio Manager Paradox Tinto - Follow me at Twitter!

6:30 is sleeping in?
Toggle signature
Byzantine.Hellenistic.Ottoman.Sogdian​

Well yes.. I was not home until 1.30 am so need some sleep.
Toggle signature
Johan Andersson
Studio Manager Paradox Tinto - Follow me at Twitter!

While I was hoping that we'd get a system more like the percentage-based chances for things to happen in CK2 instead of one like the power system in EU4, a lot of the things you can do with power sound pretty interesting. I'm especially excited about inventions and unique unit abilities. A party system existing sounds sweet as well.

The attributes of your ruler aren't randomly generated r... right?

youtubers who follow the dev diary will not have lot of things to talk about today especially that some have already explained this .

at least we got a new greece screenshot map
V

Cephei80 said:
youtubers who follow the dev diary will not have lot of things to talk about today especially that some have already explained this .

at least we got a new greece screenshot map
Click to expand...

We didn't know the functions of the different powers before, and there's a lot of interesting stuff in there. We now know that there will be inventions, unique abilities for units, omens, a party system, and a lot of other new stuff.

So mana is not used for technology but for everything else. I like that it makes more sense. It also seemed to address the main criticism people have of eu4; That the same pools were used for both.

Valanarch said:
We didn't know the functions of the different powers before, and there's a lot of interesting stuff in there. We now know that there will be inventions, unique abilities for units, omens, a party system, and a lot of other new stuff.
Click to expand...

true . i guess i was just desapointed because i was excited and expecting more stuffs .
it was too short for my poor soul .
going to wait a whole week now :'(

I'm certainly not a fan of the mana but this is at least better than EU4.

This clarifies the nature of those mysterious symbols in the top bar. Thank you for the dev diary!
Toggle signature
User Mod Index: the CK2 User Modification Index for mods, utilities and guides. Post in it to add your new mods or updates.
When the World Stopped Making Sense: developer for this CK2 dynamic & historical Migrational Era mod 476-600 (+) mod created by Enlil - 0.9.13!
Emendatio Historiae Imperatoris: developer for this Imperator: Rome historical and flavour mod.

Are you taking the negative feedback from EU4’s implementation of “mana” into account when designing this new power system? And if so what is being done to avert the Monarch Point system’s perceived shortcomings? In particular the system gets a lot of flak for being highly abstract and without the same intuitive grounding that other point based resources like Gold, Manpower, and to a slightly lesser extent stability have going for them. So are steps being taken to actively avoid that same sense of gameism or is this not seen as a real issue by the design team at this stage?

Manpower is used for building. That's pretty awesome if you ask me. I'm wondering, wouldn't it be a good idea to also link your production output to manpower, perhaps linking it to how many raised forces you have compared to available manpower? this would stimulate how farmers wielding a spear aren't exactly farming much.

Those symbols will make for fun icons when we finally get the ability to use the Imperator icons on the boards...

As for the mana themselves, I think a lot will depend on execution and how they're used -- but I'm always eager to learn more about the various functions they perform. Some of them sound familiar.
Toggle signature
"Methought I could discern a pretty Democrat à la mode Françoise, and a sweet little Federalist à la mode Angloise." - John Lambert, French visitor to New York during the Jefferson administration.

The concept that "ideas should match government" is quite interesting.
So to stress some ideas leads to a necessary reform of the state.
I hope you will detail more in the future.

BTW, I'm almost sure the projection you use in the mini map is Bonne-Werner. Nice choose!

Will that moving pops thing be on instant? I hope not, I'd like it being a system where you have to slowly spam the civic power so the pops slowly start acting the desired way.
Actually same could be said for converting pops: It should be a slow process where you spam your power into a "progress bar" and then it converts. This way the use of powers doesn't feel like using magic but more like an actual accomplishment.
Show hidden low quality content
You must log in or register to reply here.
Share:
Facebook Twitter Reddit Tumblr WhatsApp Share Link
Top Bottom