Jump to latest Follow Reply
Menu
Install the app
You are using an out of date browser. It may not display this or other websites correctly.
You should upgrade or use an alternative browser.
Imperator: Rome 8722 Bug Reports 3609 Suggestions 2350 User Mods 605 Tech Support 487 Multiplayer 55 After Action Report (AAR)
Show only dev responses

Hello and Welcome to another Developer Diary for Imperator: Rome!


Today we will be covering the Law changes, as well as new Character Interactions in the Cicero Update. As you will be aware if you have played the beta version of the Update we have revamped laws for all governments with the goal of making the government types more distinct from each other and to better interact with the game world.

This rework was in part necessary since the overhaul of population meant that many of the laws should now interact with the new system, changing the ideal ratios of different pop types in your cities, or increasing the speed of religious conversions, but it was also born out of a wish to introduce more meaningful choices when selecting your laws. 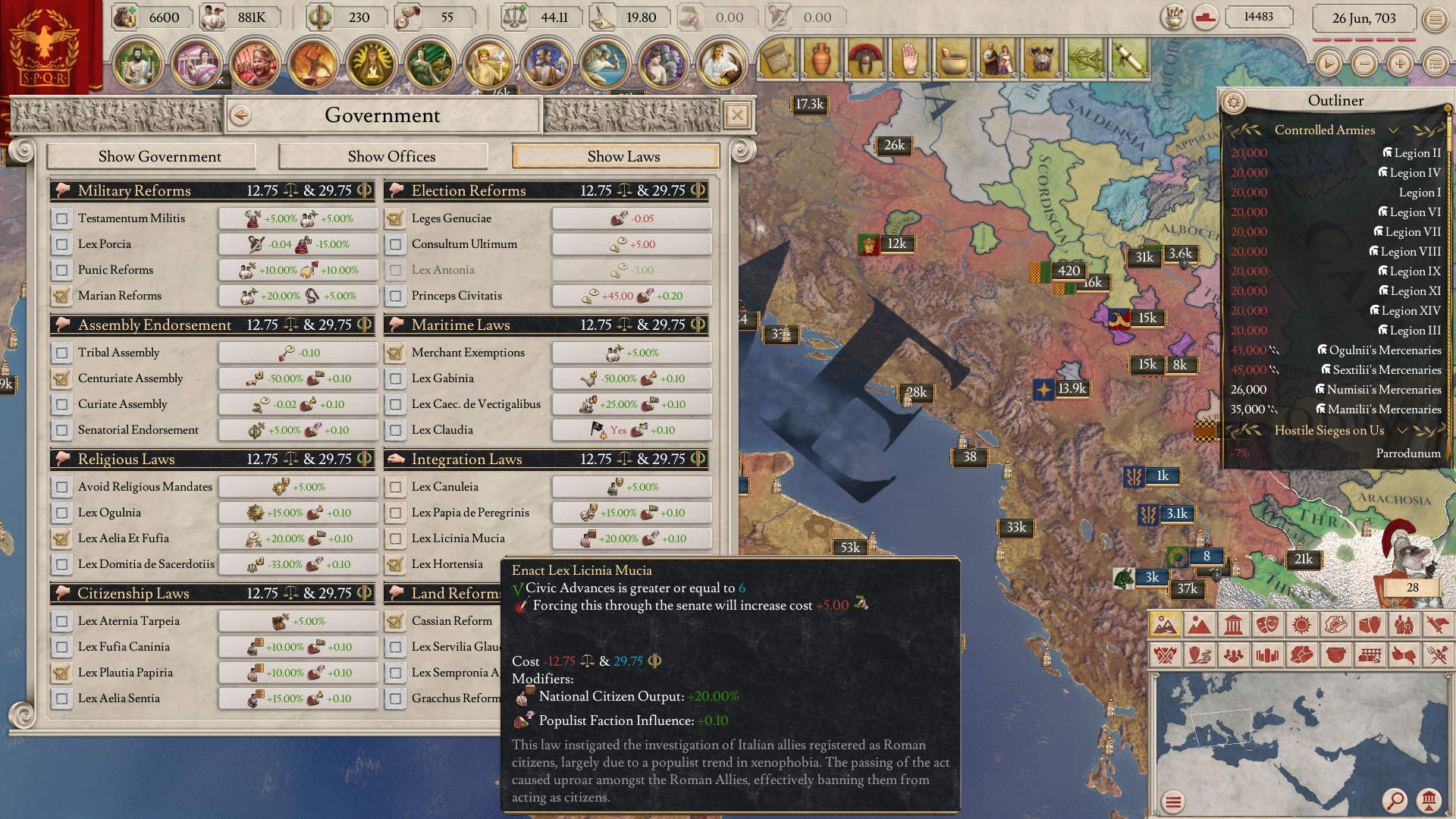 While half of the law categories are available from the start, the last 4 categories (Religious Laws, Integration Laws, Citizenship laws and Land Reforms) are now unlocked by technology as the game progresses.
The main chance to Republican laws however is that any choice you make will increase the influence over one faction in senate over the others over time. Often the faction that grows will do so in a reactive manner, empowering one faction will allow its opponents to grow. 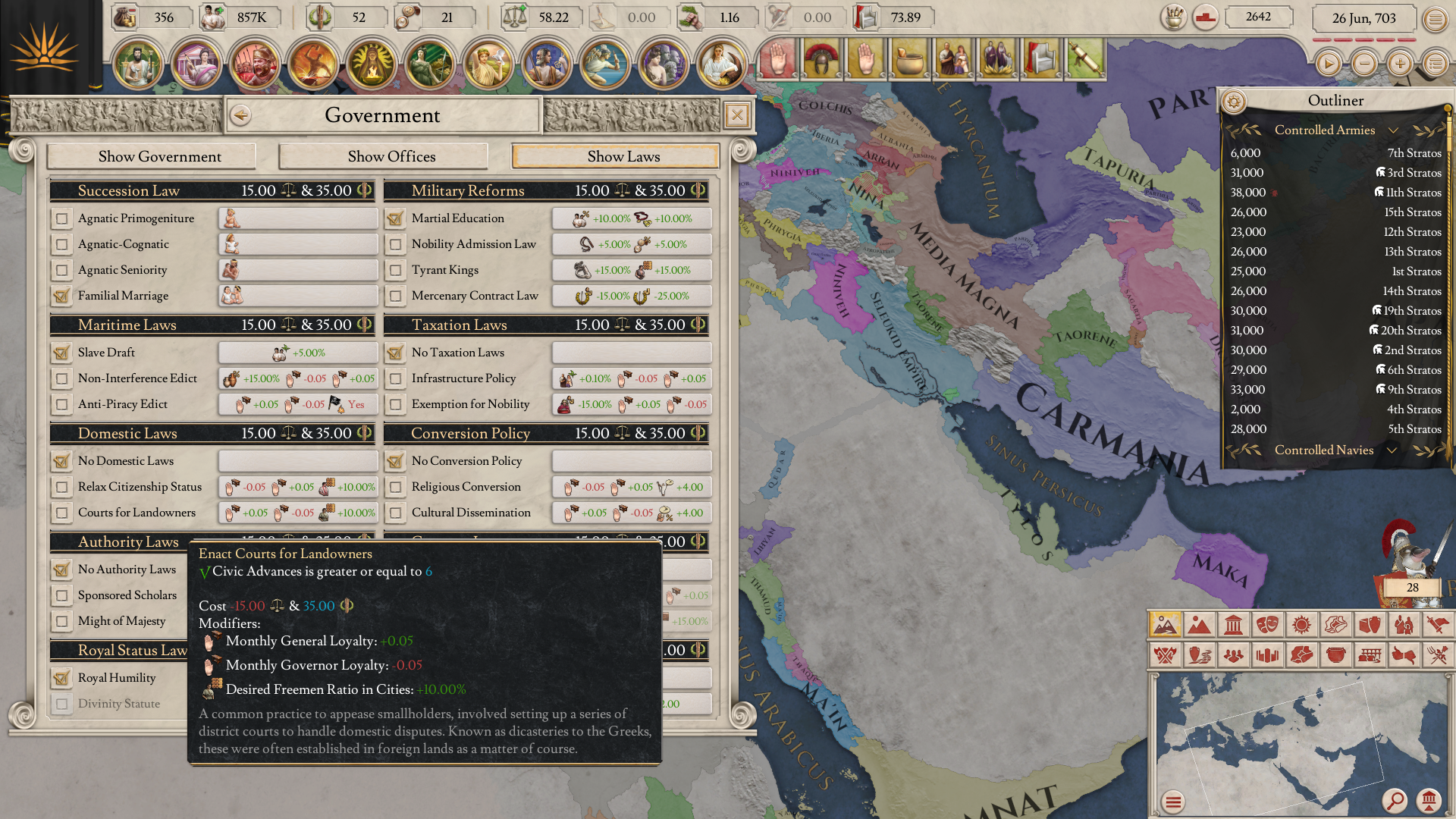 Where Republics have to accept that any law they adopt will have an effect on the balance of the senate factions Monarchies will instead contend with the fact that most laws will now increase the loyalty of either your generals or your governors, while also decreasing it for the other group. In this way you will now have to balance the need for loyalty of your governors versus that of your generals.

Just as in Republics there are a number of Law Categories that are unlocked by technology (Taxation Laws, Domestic Laws, Conversion Laws, Authority Laws and Contract Law) with each further modifying the loyalty of your Governors and Generals. 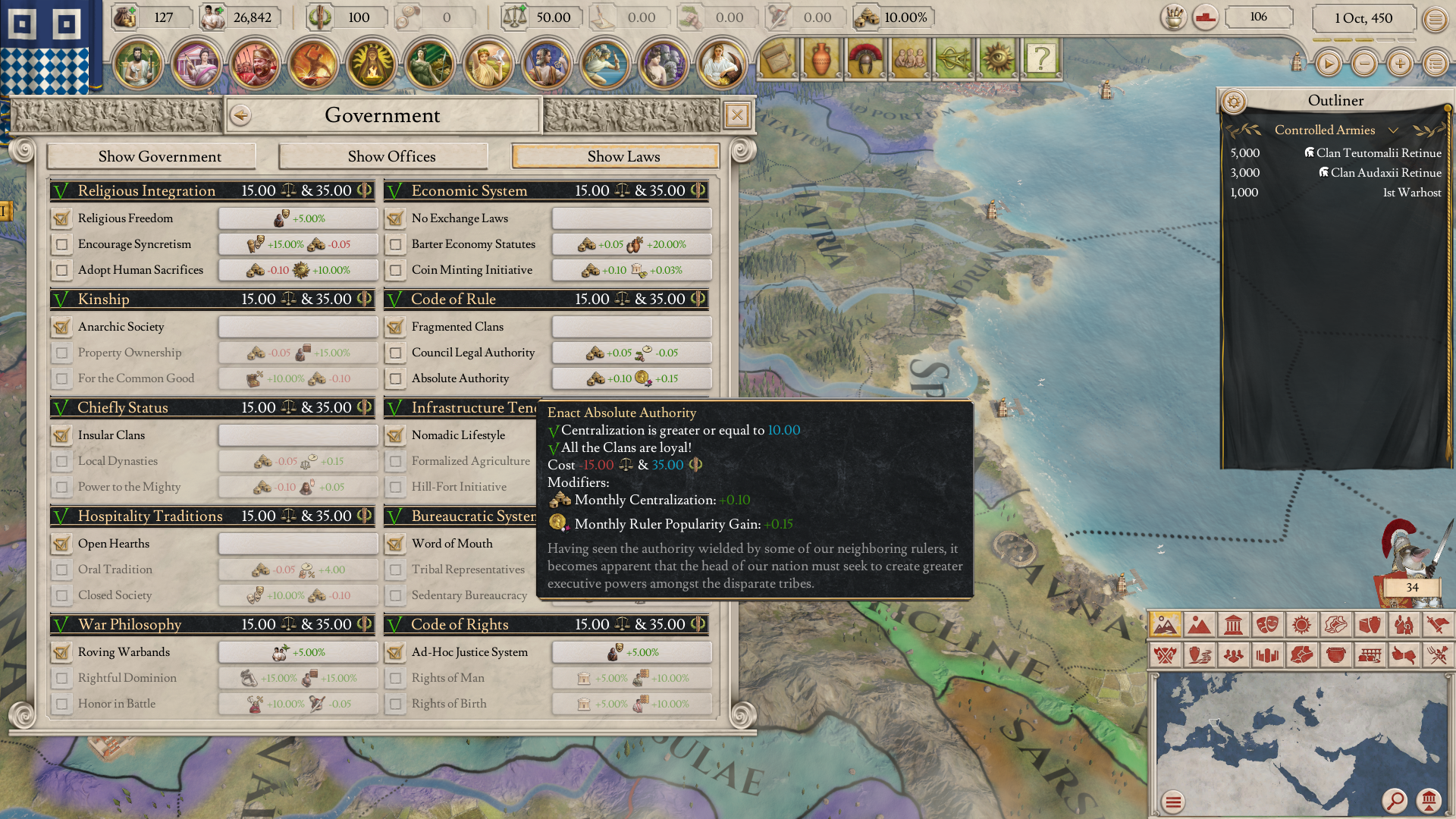 Tribes are different in many ways from other countries. Most notably the Centralization value of Tribal countries cover how sedentary their society is, and Tribes that do not settle down and turn into Monarchies or Republics have a hard time getting far ahead in technology.

Laws themselves will also all either increase or decrease Centralization over time, making laws an integral part of making your Tribe more migratory or in turning it more sedentary and ultimately a Republic or Monarchy.

The added effects of multiple laws also means that while it is slow at start the reformation of your society will tend to pick up pace over time as more laws are enacted. 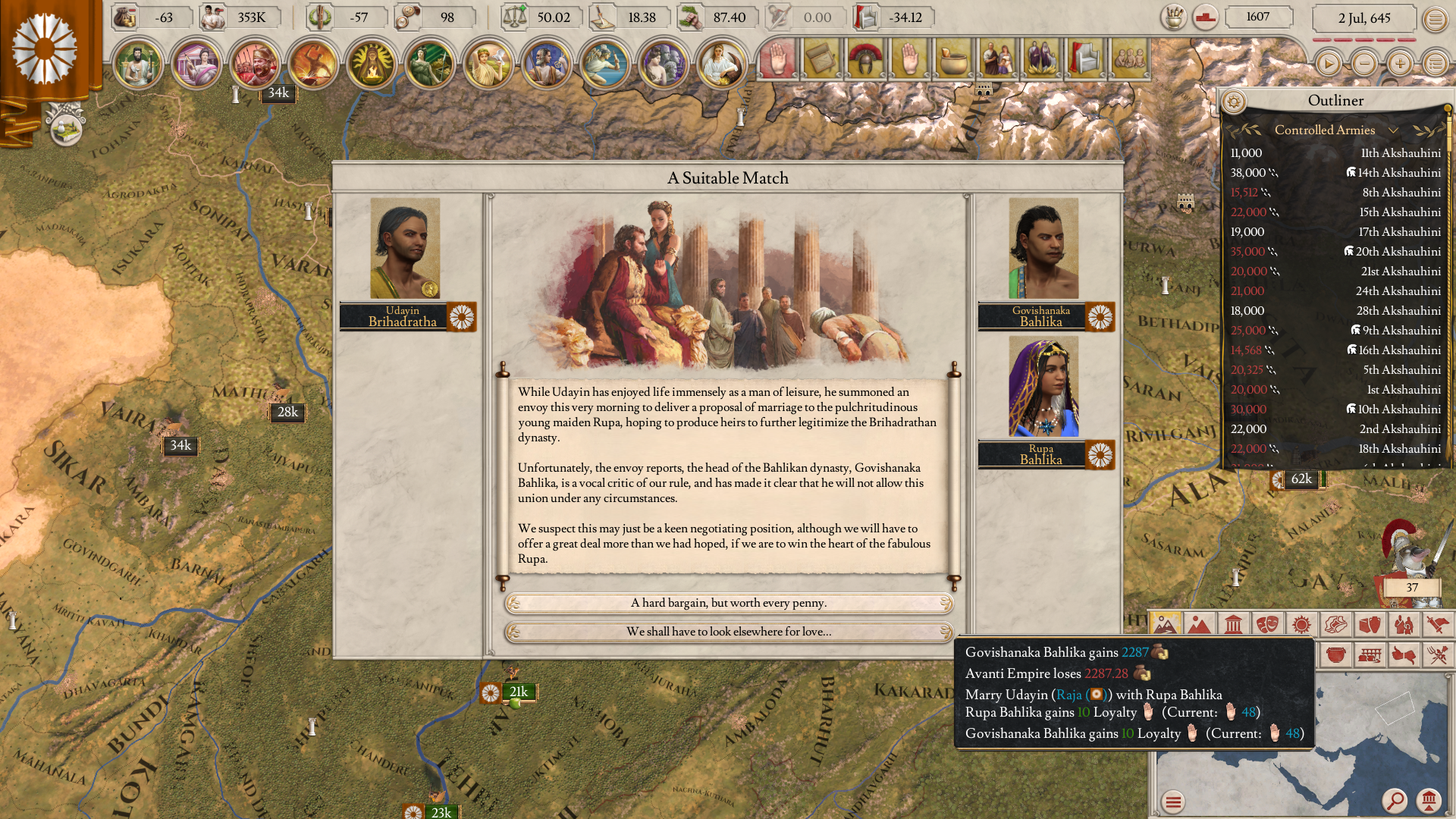 Arranging marriages for your ruler is not as straightforward as it once was. Depending on their circumstances the family of your future spouse can now make demands for a monetary contribution in the form of a dower/dowry for one of a number of reasons. Of course depending on the circumstances it may also be more straightforward, some rulers are more palatable than others. 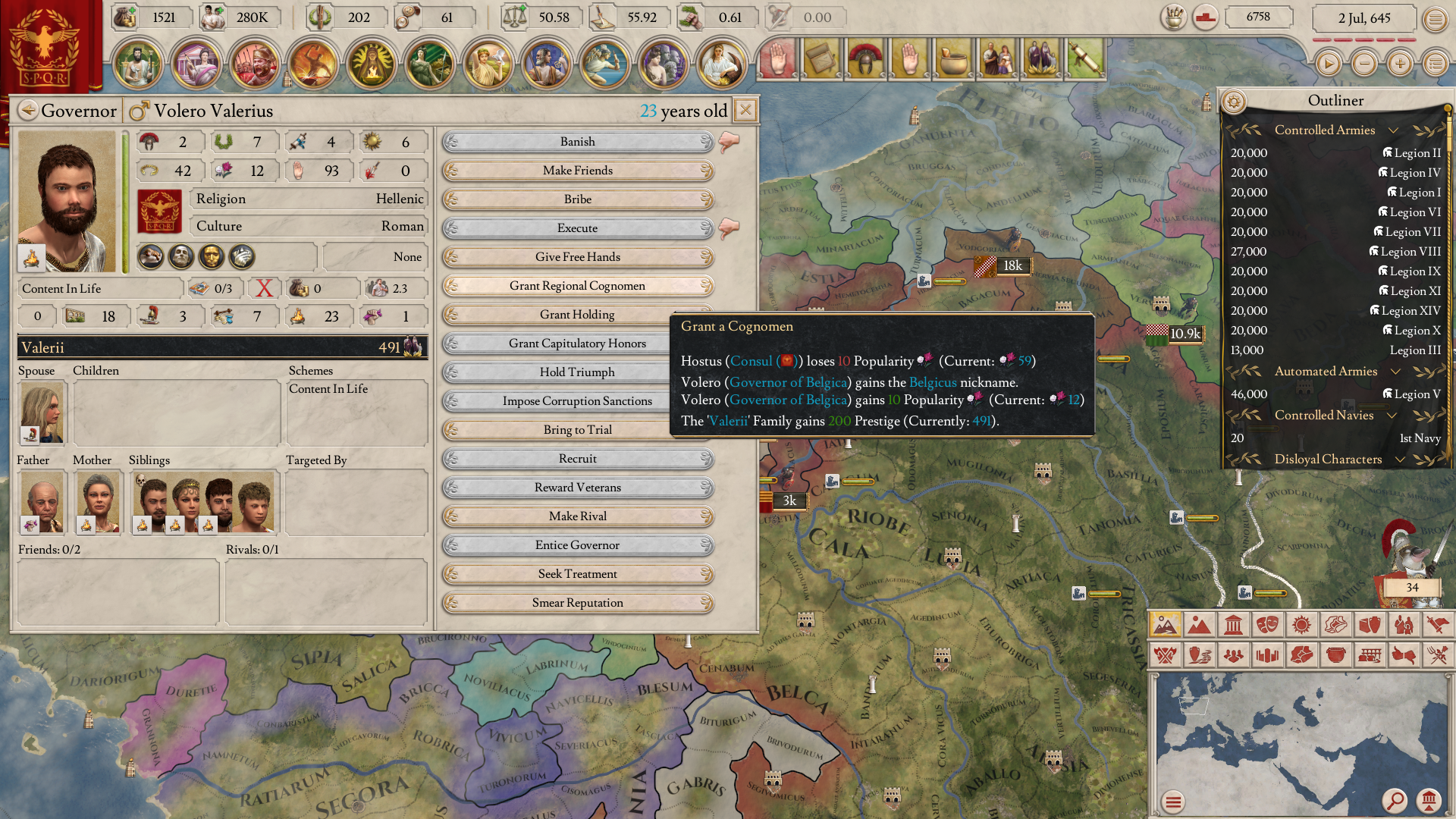 While generals were already able to acquire regional nicknames (inheritable as cognomens if playing a Roman culture country) it is now also possible to grant these directly to a governor under your control. 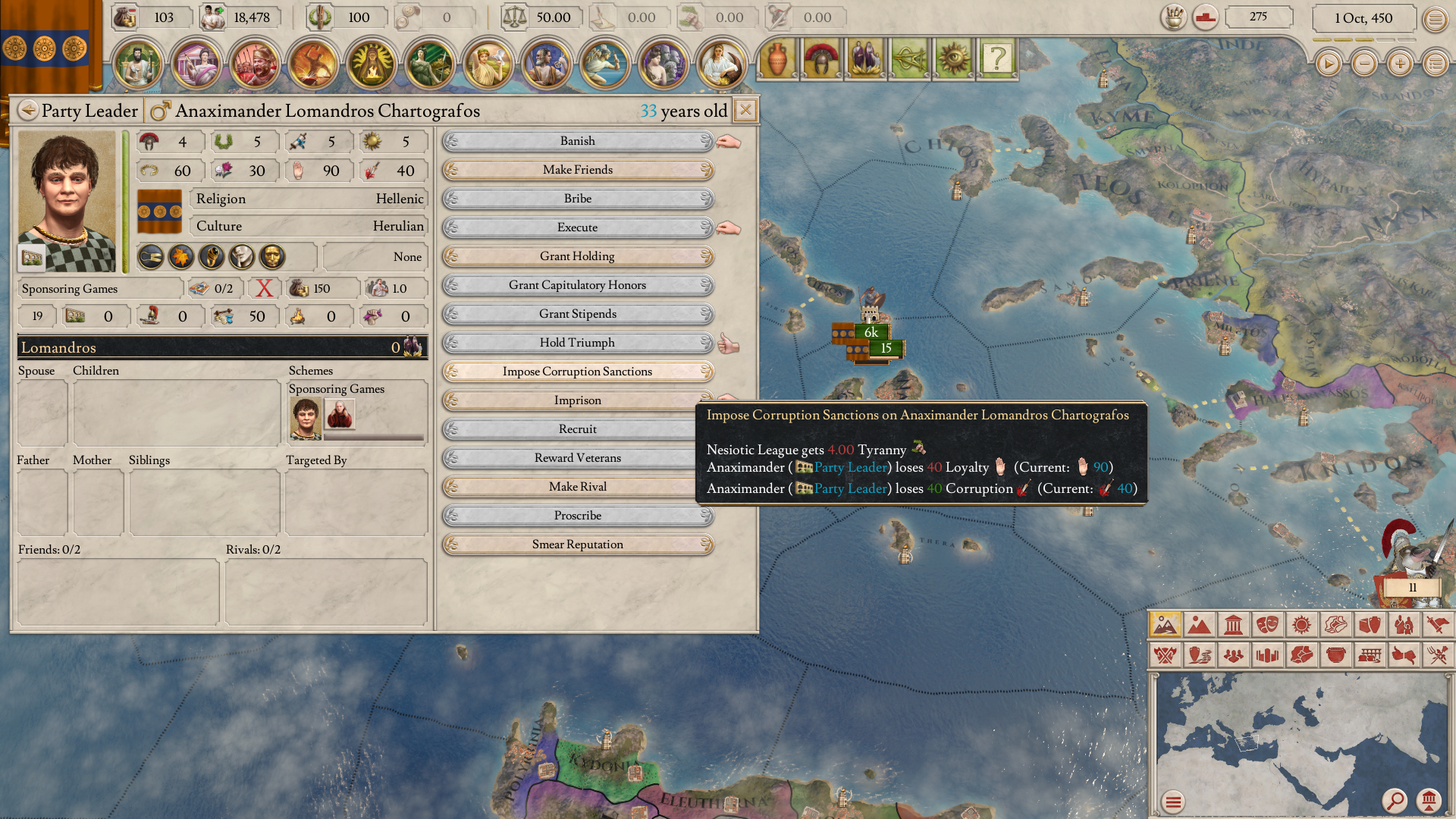 As another way to combat corruption in specific characters it is now possible to reduce the corruption of a character, this will also reduce their loyalty to an equal amount.


Power Base & Loyalty​
In the Cicero Update power base in itself will lead to a decrease in loyalty, meaning that very powerful characters will naturally be harder to keep loyal over time. This has also replaced the loyalty decrease from Loyal Troops since these contribute to the Power Base as well.


Changes since the Open Beta​
As the final release of this update draws nearer most of the things I talk about in this diary will already be known to those of you who have been playing the open beta. Therefore, here are some more assorted things we have changed since the last open version: 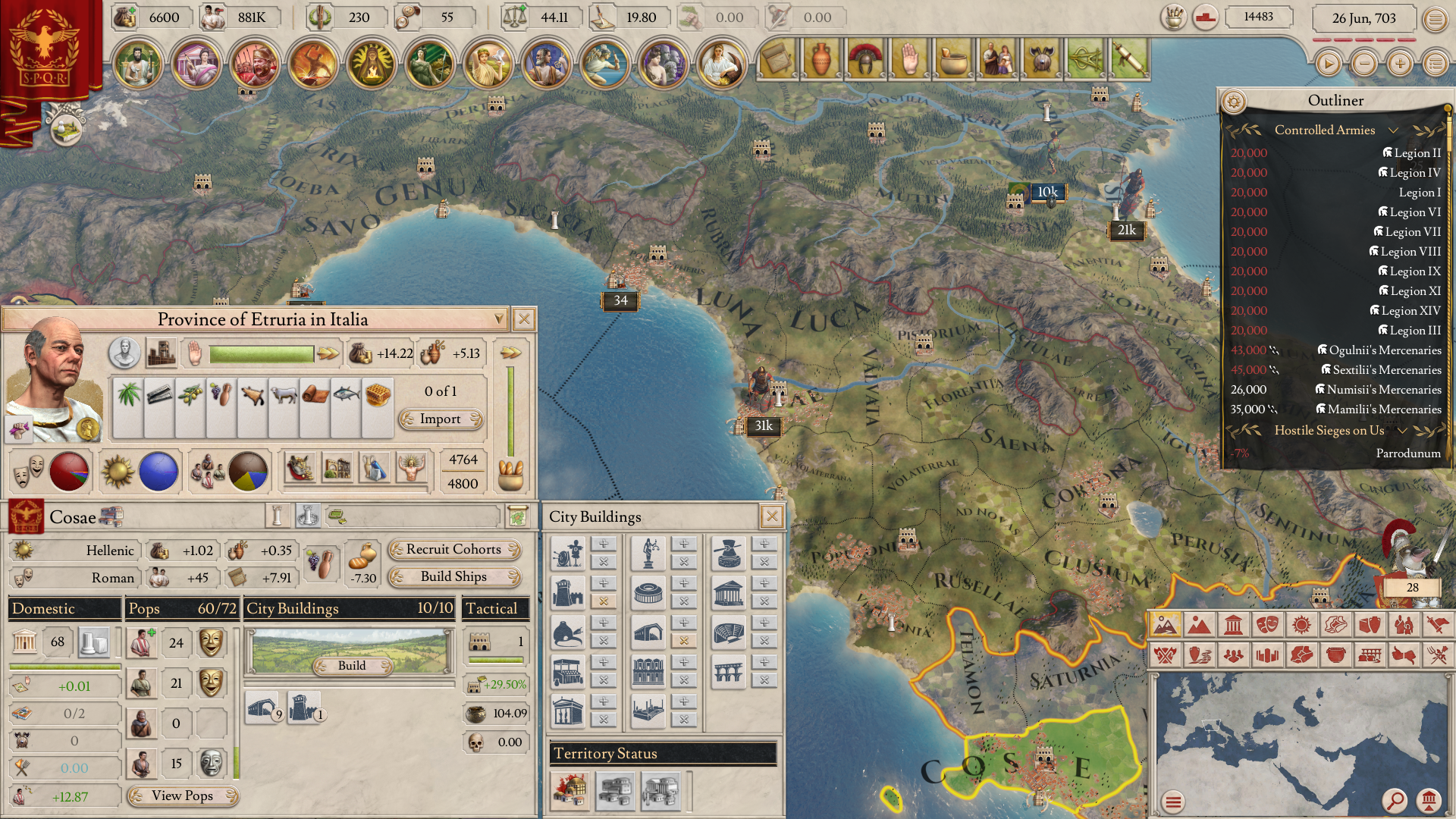 Toggle signature
No fighting in here! This is the war room!

The wait for the DD has ended!
Last edited: Sep 2, 2019
Toggle signature
Pie charts and sliders are overused and bad in modern GSGs, fite me.

Oof no wonder the Dev Diary was late today, it's chunky!

edit: nvm, most of it was known already. Welp the last paragraph is pretty good. I like that the UI has changed a little for constructing buildings.
Last edited: Sep 2, 2019
Toggle signature
I play Paradox games on youtube, check me out here if you like: Lord Lambert​

Can the Senate vote for more things now other than laws? Say for example the economical decisions and appointing governors, office holders etc?

Finally! I can do my one city game with tribes.

Im also curious about the food situation in the next patch.

Does this mean the beta patch has been updated again?

Lambert2191 said:
I like that the UI has changed a little for constructing buildings.
Click to expand...

It's still far from a clean UI but is heading in a good direction.

Lucky0000 said:
Does this mean the beta patch has been updated again?
Click to expand...

No.
Toggle signature
"I have existed from the morning of the world and I shall exist until the last star falls from the night.
Although I have taken the form of Gaius Caligula, I am all men as I am no man, and therefore I am a god."​

Can we have in-game cognomen exaples please?

rus-chel said:
Can we have in-game cognomen exaples please?
Click to expand...

It's based on the region he is governor of.
eg: "The Asian", "The Persian"...
Toggle signature
"I have existed from the morning of the world and I shall exist until the last star falls from the night.
Although I have taken the form of Gaius Caligula, I am all men as I am no man, and therefore I am a god."​

Trin Tragula said:
Revoking City Status no longer costs Political Influence, instead it costs only Tyranny. This cost is discounted heavily for Tribes.
Click to expand...

I am so glad you listened to this suggestion.
L

This is a huge step in the right direction, but I still feel like the interesting character interactions are left out in the cold. Marriage not being as easy as before and imposing corruption sanctions are all good, but having to pay some gold for a spouse or starting a trial against someone isn't really making the characters more interesting. It looks like characters don't really matter unless they are a commander or a governor, and that's unfortunate. If I have a disloyal character I just remove him from his post and the problem disappears in 99,999% of the cases. The laws sounds awesome however.

rus-chel said:
Can we have in-game cognomen exaples please?
Click to expand...

I really like the new building UI. In the little I've tried the beta, it was really hard to tell what buildings you had. It's a lot cleaner now.

Lambert2191 said:
Oof no wonder the Dev Diary was late today, it's chunky!

edit: nvm, most of it was known already. Welp the last paragraph is pretty good. I like that the UI has changed a little for constructing buildings.
Click to expand...

It’s cleaner, but is it more functional? It certainly will take time to get used to it. I like the simplistic and cleaner style, but I can’t tell from first glance what each building is and their purpose, which is a problem

I have to say, lot of great changes have been made.

But a few personal considerations. Playing monarchies i have the feeling that there was really not a meaninful path between governors or general loyalties, more a balance act, taking one law that favor a group and then other that favor the other. It might be my particular play style and need for having everything under control, or it might be the balancing act is the idea.

I transformed my nomad society in a very civilized country, it allowed me to roll over my neighboors of the Baltic quite easily. It looks to me like the only way to go.

Has anyone tried to keep the nomadic culture and grow to be a stronger nation? Is it possible or something just for RP and fun purposes?

I am really enjoying the game a lot more with the changes. The city-territory dinamic is very interesting.

Adrized said:
Are you planning on rebalancing the inventions cost before release? Currently they are way too expensive once you start expanding.
Click to expand...