Jump to latest Follow Reply
Menu
Install the app
You are using an out of date browser. It may not display this or other websites correctly.
You should upgrade or use an alternative browser.
Imperator: Rome 8774 Bug Reports 3624 Suggestions 2365 User Mods 614 Tech Support 488 Multiplayer 55 After Action Report (AAR)
Show only dev responses

Hello and welcome to the 21st development diary for Imperator. This time we’ll go into how land-combat works in the game, and talk about Combat Tactics. 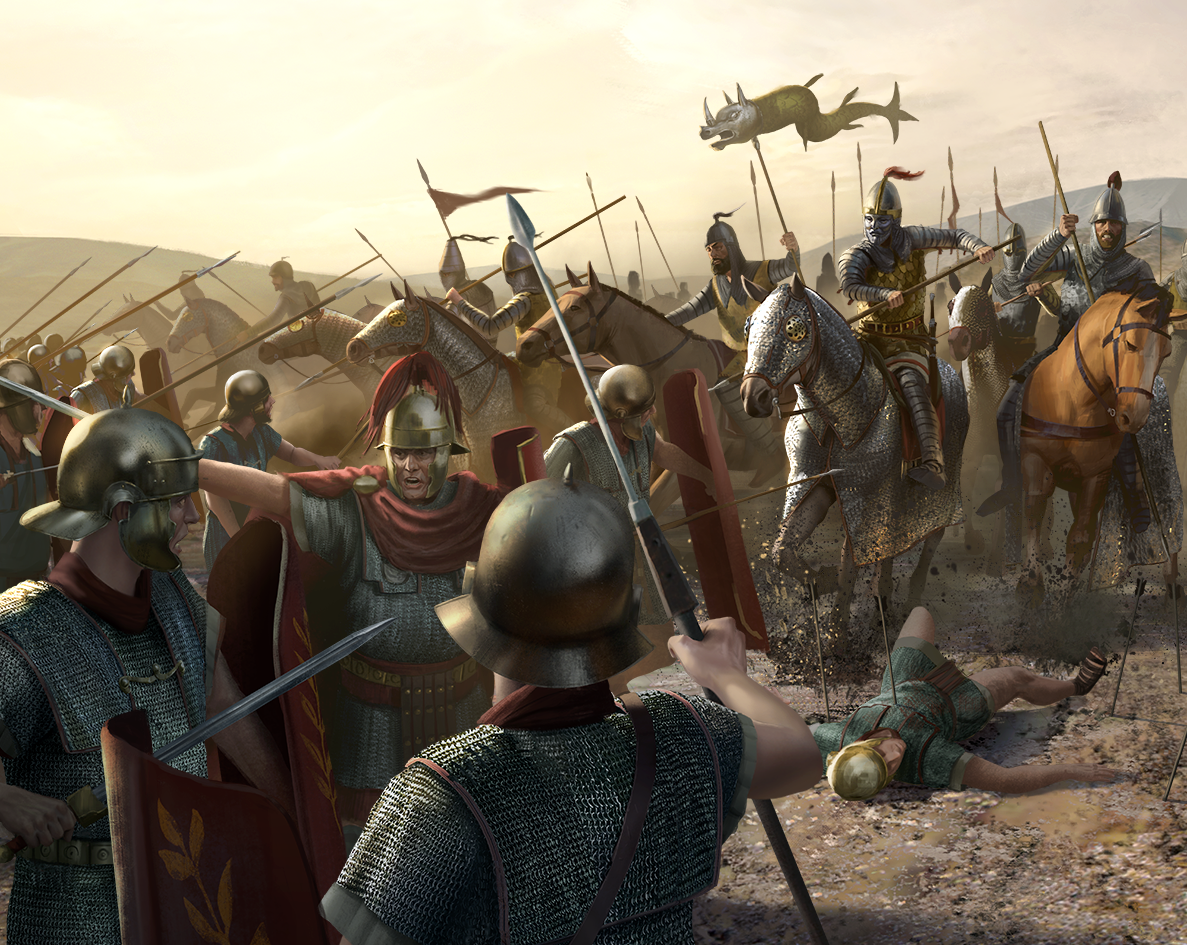 Combat
Combat in Imperator occurs when two armies is in the same city. The army first in the city is considered the defender, unless the other side has control over fortifications in the province.

The battlefield have 60 different positions for each side, as well as a reserve where cohorts currently not fighting will be. Armies will be organised with infantry in the middle, cavalry on the flanks and ranged support in the backline when possible.

Each day, each unit will fire on one target in front of them, or towards the side, if they have a high enough flanking ability.

Damage is determined by adding up the dice with the combat modifiers from terrain and leaders, where a total of 0 or below gives 2% damage, and the maximum of 15 from terrain and dice gives 30% of damage.

The impact of diceroll on a battle is far less in Imperator than games like V2, EU4 and CK2, as the range of dice is smaller with just a 1d6 being rolled, rather than the usual 1d10.

Crossing a river, or doing a naval landing, gives -1 to the attacker.

Leaders impact combat as well, with the difference in martial giving a bonus to the one with the highest martial.

Then the damage value is modified by the following before being applied to the target. (Please note that all damage is done after the round of combat is calculated, so it’s not beneficial to fire first.)

If you are firing from the back line, you are basically at 50% efficiency.

The attacking units discipline is a positive modifier for damage, and this discipline can be either the country, or individual modifiers of discipline down to cohort., and loyal regiments will do slightly more damage.

Some units perform better versus other types, where Chariots are good versus Light Infantry but bad versus Heavy Infantry.

And then the comparison of the combat tactics between the opposing forces.

The experience a unit has reduces how much damage that unit takes.

Then this damage is multiplied by a value to scale damage so combat lasts over a desired amount of ticks.

Combat Tactics
One of the more major difference-makers in combat is the tactics. For each army you can determine one offensive and defensive tactic, which each has 1 they are great versus, and 1 they are bad versus. 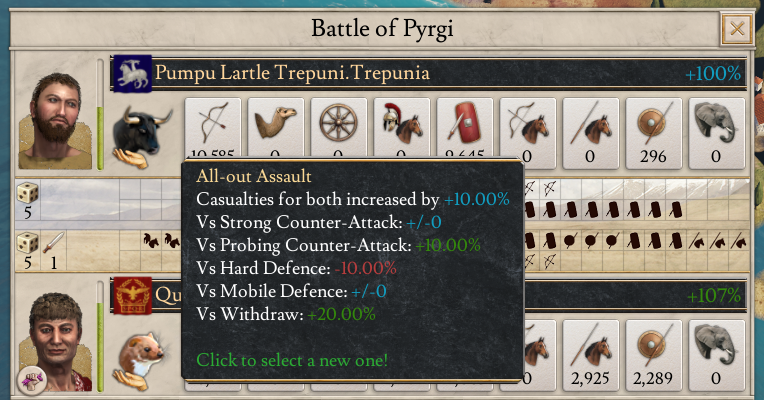 All Out Assault
+30% versus Withdraw
+20% versus Probing Counter Attack
-20% versus Hard Defence
Both sides takes +10% casualties.

Nice to see you're back @Johan

Metroidkirby said:
Nice to see you're back @Johan

Can we change an army's tactics when in battle?
Click to expand...

ok, so we have a 2% damage per dice roll.
Now I wonder about the attack and defense stats of the units !

However, a bit too much EU4 like in the end. I would have hoped for large changes

So you weren't killed in a hunting accident?


Also is there anyway of seeing your enemies tactics because if you can't that would make for some very interesting multiplayer games.​

Why do battles have to last for several days? That's not very plausible

Why does withdrawing increase casualties?
Toggle signature
If you think my comment might be in-universe or a joke, it probably is...

Very nice, and like the battle window artwork
Toggle signature
"You can live for months without mail; for weeks without food; for days without water; for hours without POL; but you cannot live for seconds without ammo."- Combat Leaders and Lessons.
D

Will experience be possible to increase. EU: Rome casulties are so high and experience gain so low that it is pretty much impossible to get a high level of it, especially since the decay is brutal.

Really nice that there are quality differences (discipline/experience) between units!

I’d personally like to see a bit more variation in available tactics, and having them effect the performance of certain unit types as well.
Toggle signature
"Timendi causa est nescire"

Do maneuver and movement speed play any role in combat? (The two stats showed in DD#4)
Toggle signature
My suggestions to improve Imperator: Rome:
Proposed Improvements to Armenia and its Environs
New Cultures, Tags, and other Improvements to Anatolia
New Deities and religious flavour for the Near East.
Proposed improvements to the central Anatolian Steppe
A new set of Military Traditions for the Regna Minora of the Near East

A few questions regarding Combat Tactics:

myrt said:
Why do battles have to last for several days? That's not very plausible
Click to expand...

I think it's like other Paradox titles where... like... it's not the actual battle that's lasting for several days (or even months in some cases), but the whole overall maneouvreing and engagement of the two (or more) armies.

But all of this is represented as a battle. So it's like an abstract.