Hello everyone, and welcome to another development diary for Imperator.

In the Cicero update, we are changing the instant population manipulation mechanics to become a simulation over time that you can nudge.


Pop Movement/Migration
Slaves from neighboring cities, or cities within the same province, can still be moved manually into a city for a cost, somewhat similar to before. This will also be possible for Tribesmen if you are a migratory tribe.

Each city can also have one pop migrating at a time. If the Migration Attraction in a city is X more than that of another city then migration can happen to it if:

Which pop is picked for migration will be random but a slave will never be picked unless the city is over its population capacity and the slave is not required for a holding. A pop that is currently migrating cannot be picked for Promotion, Assimilation or Conversion. It will also only be picked for starvation if it is the last existing pop in the city.

The speed of Migration can be increased or decreased by modifiers such as a city being looted, or a certain governor policy being used.


Pop Promotion
If the population of a certain pop type is below 33% in a given city then a random pop is picked for promotion. This pop will then over time start promoting to the underrepresented pop type. The speed of promotion will be dependent on modifiers as well as using the Social Mobility governor policy.


Pop Assimilation and Conversion
Similarly to Pop Promotion Assimilation and Conversion will happen to one selected pop at a time. Unlike the other two there will always be one pop chosen as long as there are pops of the non-state Religion or culture. The speed at which conversion takes place is dependent on a number of local and national modifiers however which means that de facto the pop may not be assimilating/converting.


As you can see below, the pop interface is in the process of being completely reworked for Cicero. 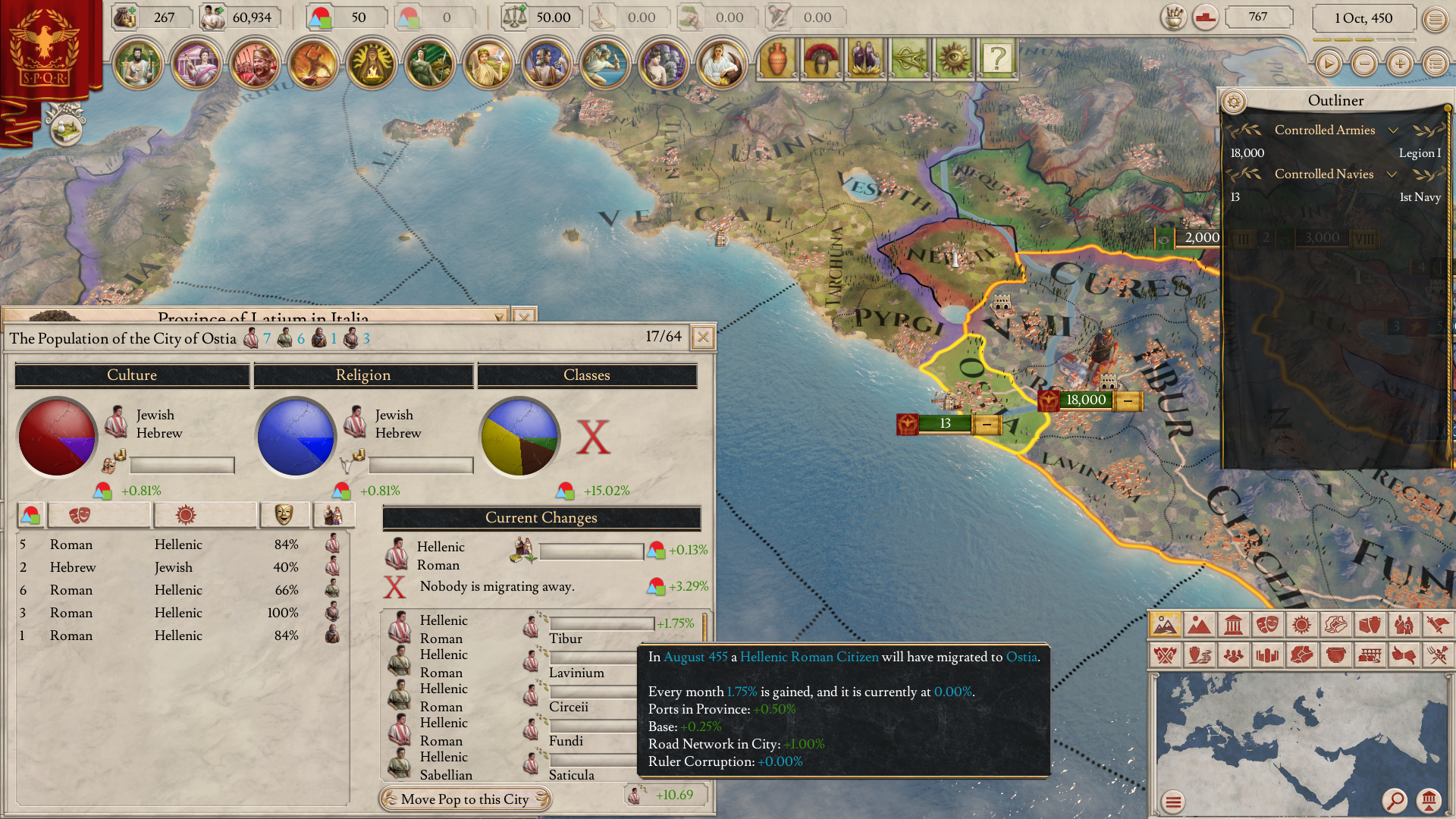 As the impact of governor policies now scales with Finesse, you need a really good governor, and perhaps a few special buildings to be able to convert and assimilate cities with another dominant religion and culture. 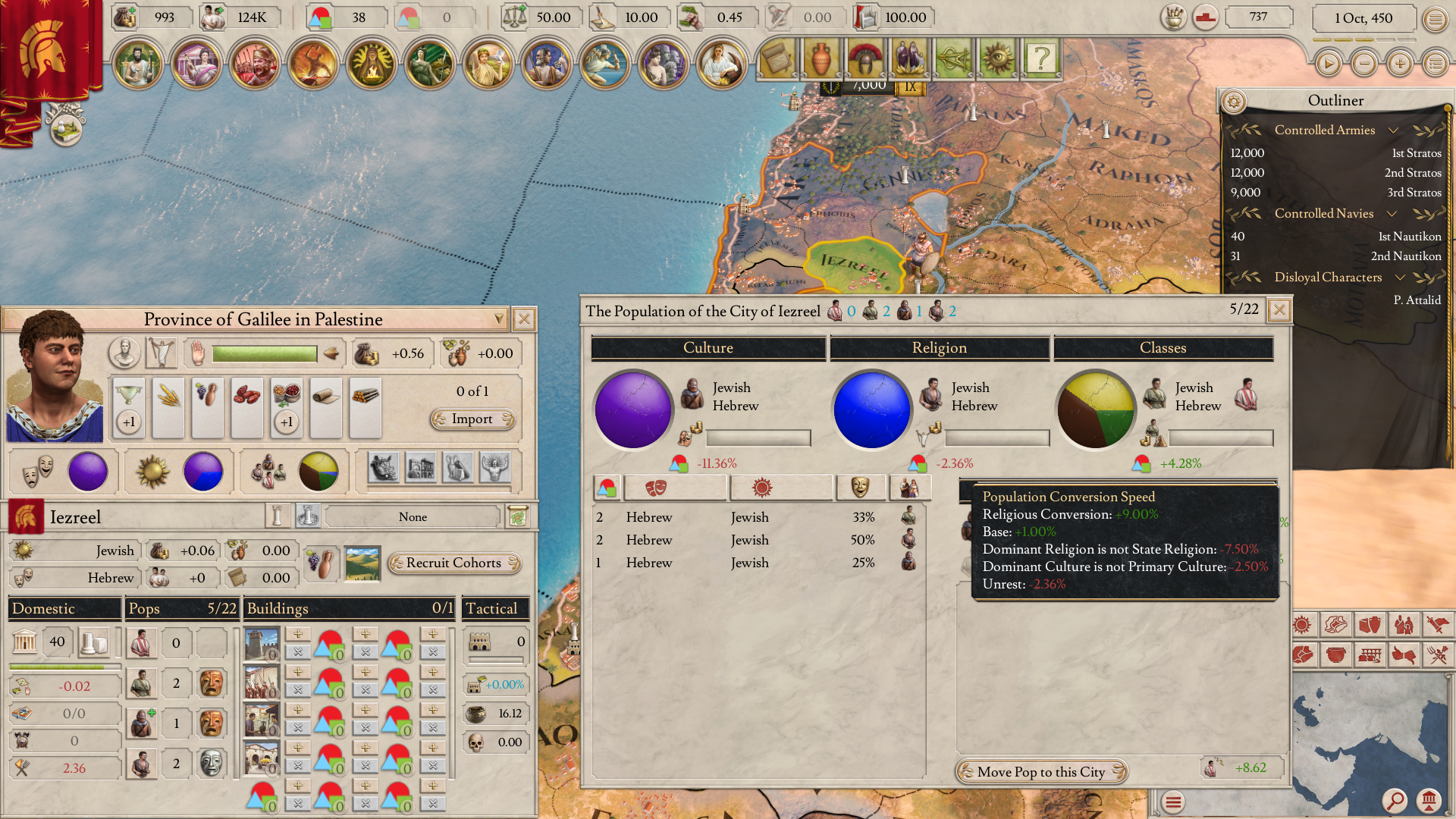 You can still manually move slaves as you like between cities, for a price in gold, but the UI have been completely changed, so instead of selecting a pop then a target, you instead go to the city you want slaves in, and then select what type of pop you want, and its origin and click for as many as you want in the same UI. 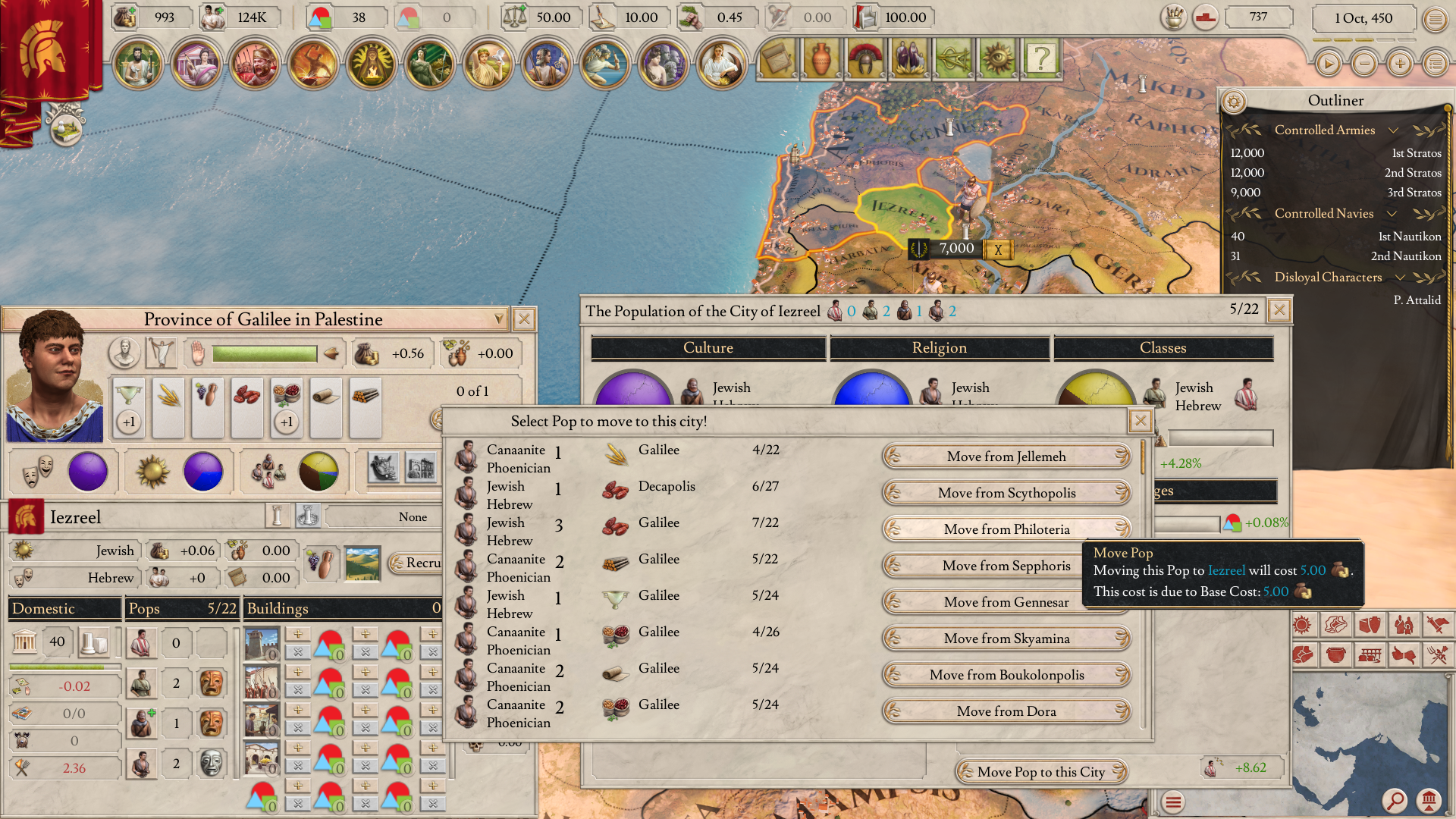 Fantastic! Making the pops dynamic and organic just makes the world feel so much more alive!


Johan said:
Each city can also have one pop migrating at a time. If the Migration Attraction in a city is X more than that of another city then migration can happen to it if:

May I suggest adding a 4th qualifier:

4. There is a trade route between 2 provinces with a port (does not have to be the same country)
Toggle signature
I play Paradox games on youtube, check me out here if you like: Lord Lambert​

Yes, what the game really needed is organic internal development that really makes the most of the POP system. The system of micromanaging POPs and instant gratification might be great for hardcore min-maxers but aren't that fun to play.

Looks great!
I love the fact that only slaves and migratory tribesmen can be moved manually.
Do we still keep the centralization policy?
Toggle signature
A gourmet proposal: Making pop produce food

Amazing! This is exactly what the game needed.
And I second the suggestion with the trade routes.

One question is: Are there modifiers for which pop is slated for migration? I would imagine that citizens migrated more and that pops would be attracted to provinces with similar culture/religion.

This is... awesome. If there where a "I heart this post so much" button you would get two clicks from me Together with the information you gave us yesterday, and the other DDs, Cicero is shaping up to become one of the most defining patches I've ever seen from a game that is less than a year old!

I really like the direction Imperator Rome is going forward. Looking forward to more developer diaries on the Cicero update!

This sounds great. Should make pops feel more like a population of people that moves, grows, and changes on its own, but in ways you can influence and manipulate.

I don't hate power points as a mechanic, but it was frustrating to have to do all the promotions and movements manually. I also think that while power points can create an interesting set of linked opportunity costs, they don't in I:R. This new system sounds much better.
Toggle signature
Tall Tales, a Tall France mini-AAR

How is a city’s migration attraction determined? And what’s to stop everyone moving to one city and depopulating the rest? How will this affect colonisation if you can’t attract 10 pops to a border city?
Toggle signature
Lead modder for Equestria at War for Hearts of Iron IV. Founder of: The Four Nations - An Avatar: The Last Airbender Mod (CK2).

I'm loving everything about this sytem. Even the interface design is well thought out.

In the long run, I would suggest assignments/missions for members of your government too. For example you can assign your high priest to a state for an increased wage and he can boost conversion in that state.

So I am assuming that Pop promotions would no longer be to a single pop type.

Currently slaves can only promote to freemen and freemen to citizens. So with 1.3 slaves could now be promoted to citizens?

Or does this mean simply that if citizens are underrepresented a random freeman would be selected for promotion?

Are the penalties to conversion from lack of dominant religion / culture based on city, province, or nation stats?

Rabid said:
Are the penalties to conversion from lack of dominant religion / culture based on city, province, or nation stats?
Click to expand...

Very nice, looks promising! Especially the current lack of a pop overview for each city does bother me, so i'm really glad to see this getting added.
The new pop mechanics look great, too. I like that demographics are something you cannot control directly (except for moving slave pops of course, which does make sense), but can try to steer in a certain direction.

Two questions:
Will minorities have some sort of resistance against conversion/assimilation? I would imagine that they'd feel threatened and defensive once the state religion/culture becomes too dominant in a city. The negative modifier if state religion or culture is not yet dominant makes sense, but perhaps there should also be a negative modifier at the other end, so that the sweet spot for converting and assimilating would be somewhere in between.

Will rurality/urbanity affect it as well? Cultures and religions always had a harder time spreading into the more rural areas.

Nice. In the tool tip for slave movement could you include the trade good in the province got are taking them from and whether you'd be listing a potential holding or extra trade good etc?
D