Hi!
In today's Developer Diary for Imperator Rome we will be talking about Barbarians, what they represent in the game and how you can interact with them. We will also go over the regions on the far side of the Himalayas, the Tarim Basin and Tibet.


"Barbarians"​
Throughout antiquity there are many marginalized peoples living "off the edges" of our map, and in the isolated and hard to tame regions of the world. Bedouins in the deserts of Arabia, Slavs or Sarmatians in eastern Europe, etc. Barbarians represent them and the threat they posed to nearby civilized neighbors. They will continue to pose a threat to pops long after a region has been conquered until they have been civilized through the influence of nearby settlements. 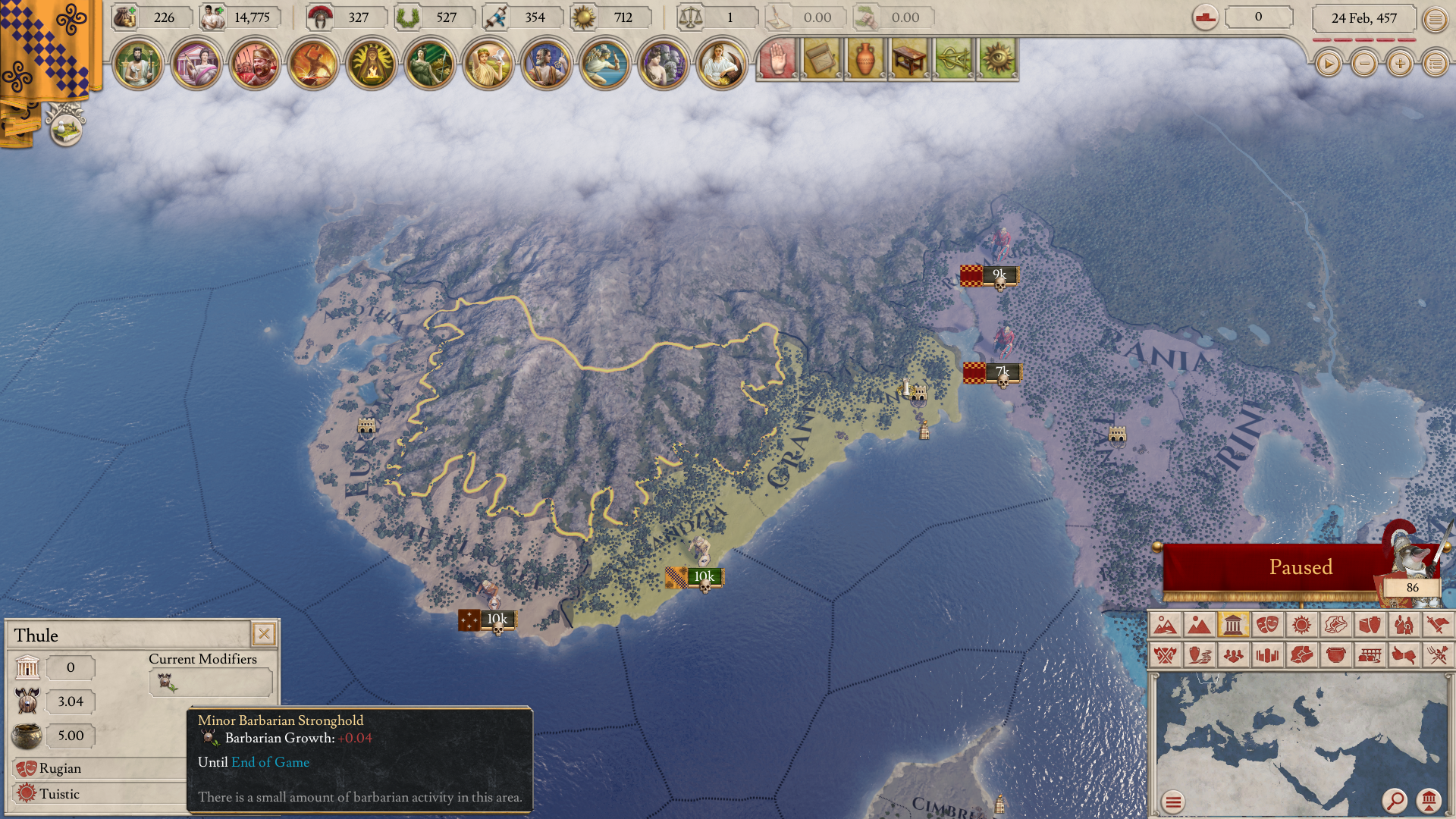 ​
Around the map, in impassable, uncolonizable locations, there are local modifiers called Barbarian strongholds. In this location Barbarian power will build up over time until a Horde spawns.

Since Barbarian strongholds are in impassable locations they cannot be directly interacted with, however the governor policy for Civilization Effort in an adjacent province can increase the civilization level in the stronghold's location, and eventually downgrade, and then remove the stronghold. 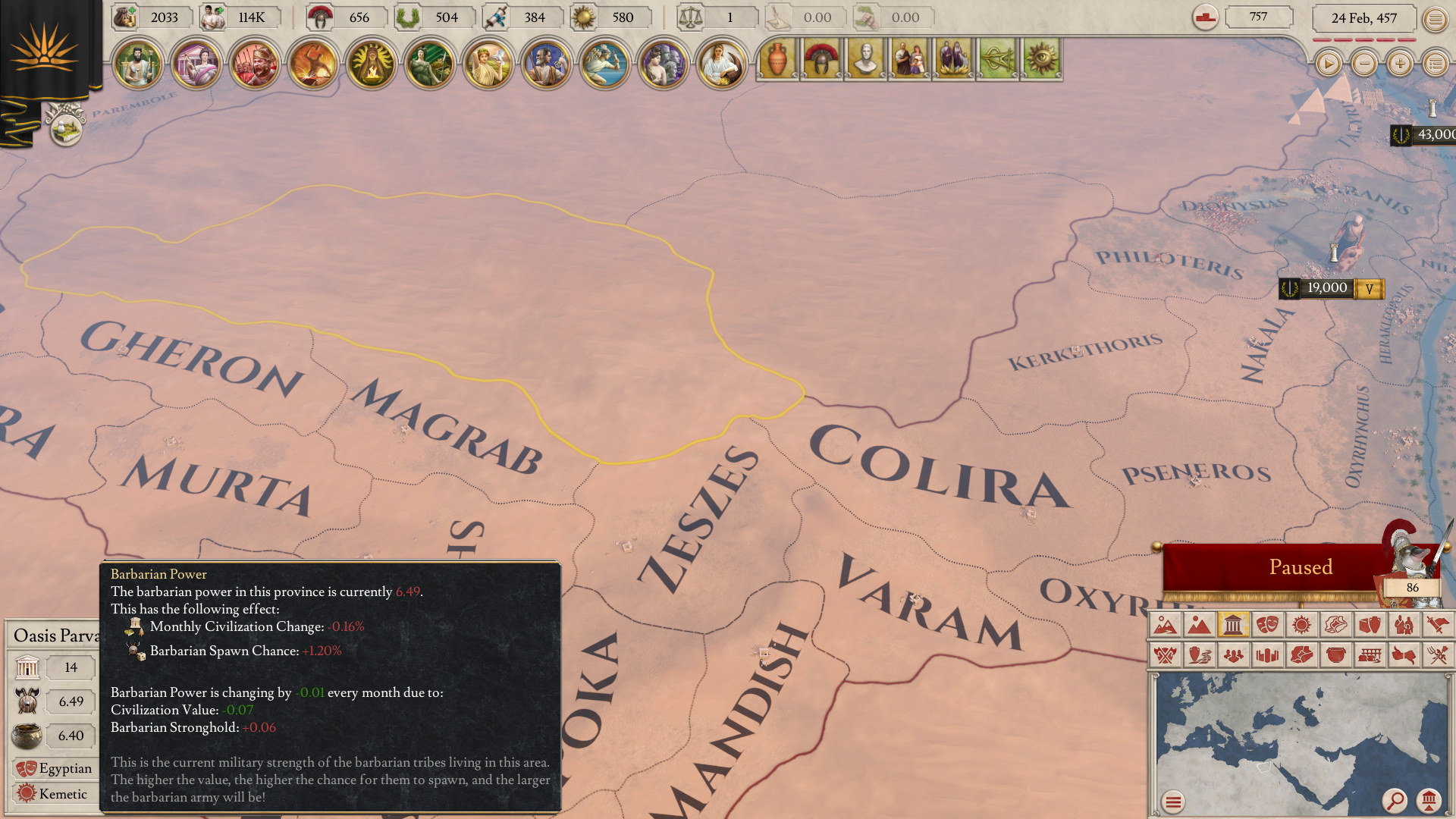 ​
How strong barbarian presence exists in a location. The higher Barbarian power the more likely it is that a horde will spawn there. Higher Barbarian Power also results in bigger Hordes when an army is formed. 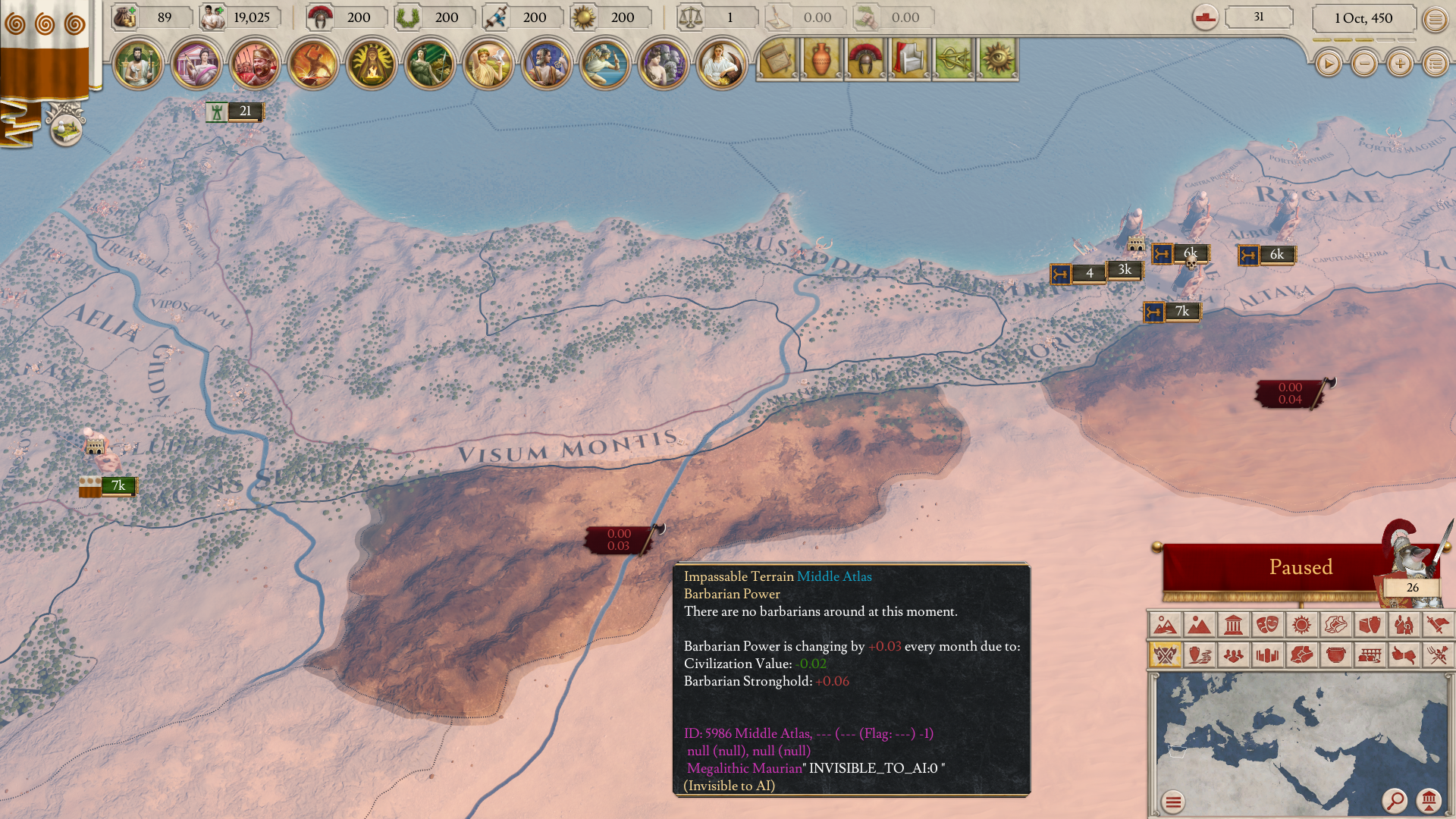 ​
This is how quickly Barbarian Power Grows in a location. The primary source of this modifier is from Barbarian Strongholds, in impassable, uninhabitable, land.

Civilization value reduces barbarian growth wherever it is present, therefore barbarian power growth is going to slow down and then regress once an adjacent province has increased its civilization rating enough.

Current barbarian power, Civilization and Barbarian Power growth rate can be seen either in a mapmode for Barbarians or in the locations themselves, in their location interface. 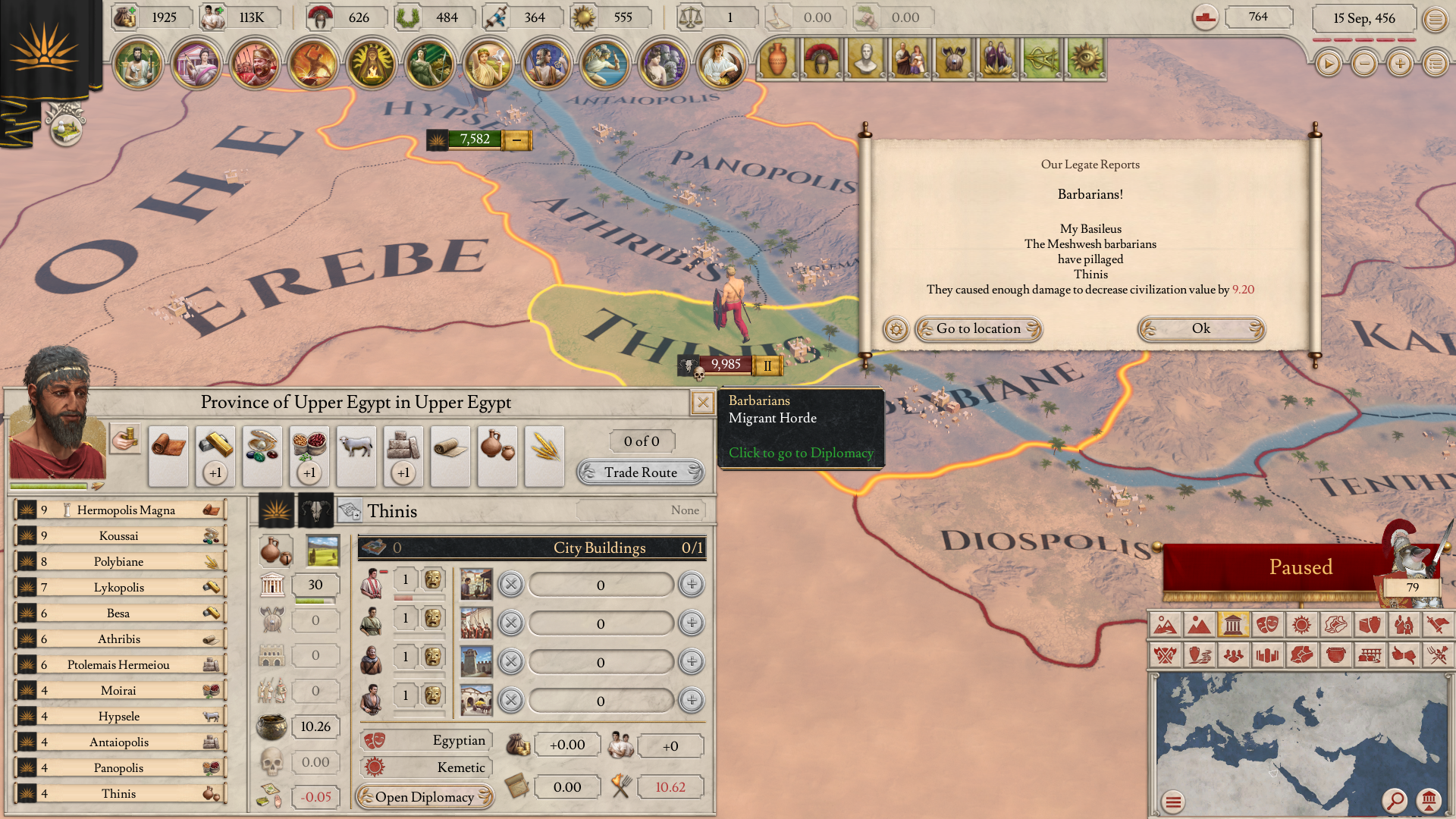 ​
Once Barbarian power has built up sufficiently a horde will spawn. The size of this army will depend on how high Barbarian power was in the location in which it spawned. All armies that spawn from the same location will be considered part of the same Horde.

The Horde will move into settled territory and begin occupying cities. Every city that falls will have its local Civilization Level reduced by the horde.

If a Horde is defeated by an army the leading general will get money and the units in the Barbarian army will be distributed in the winning country as Slaves. 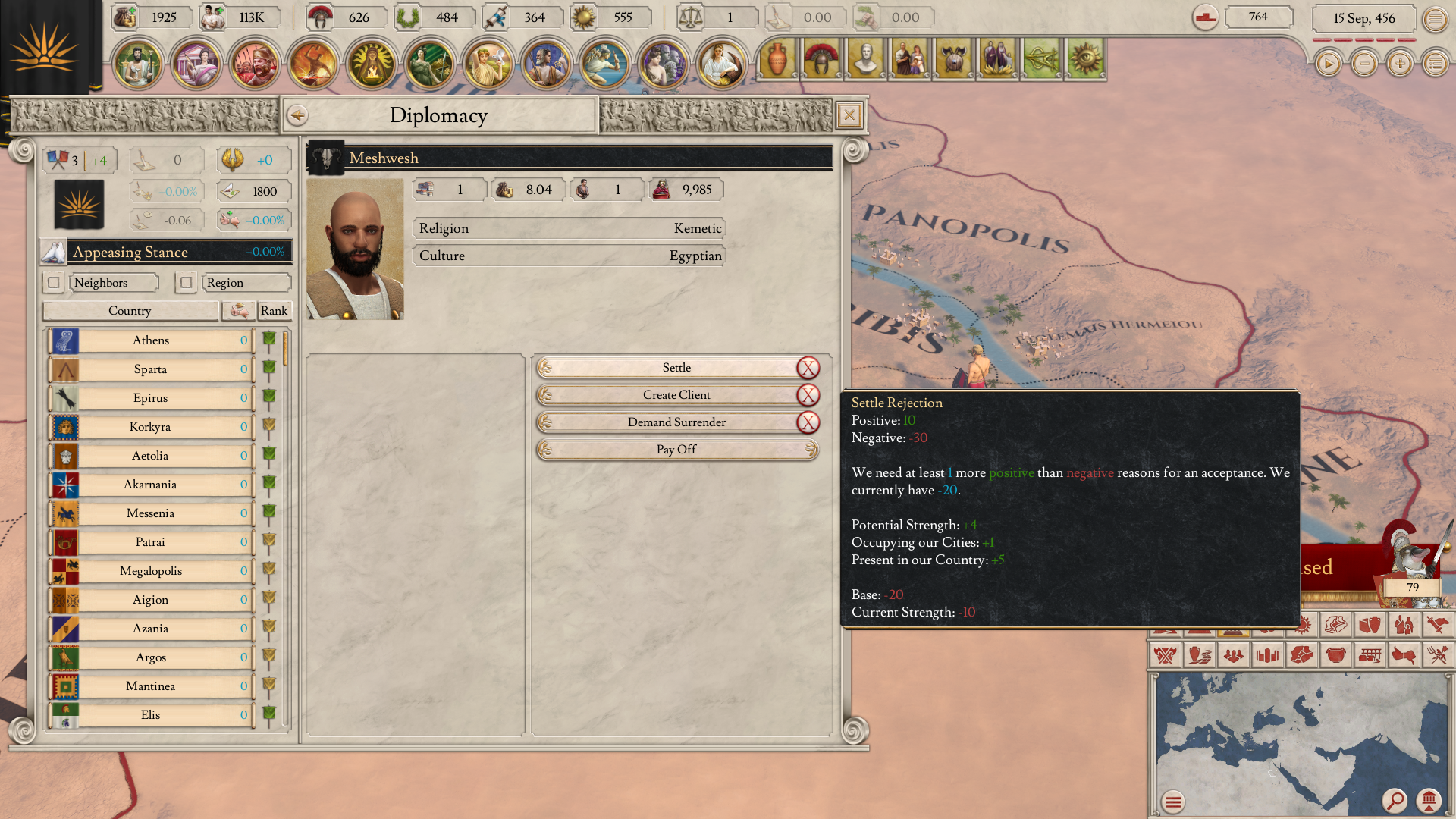 ​
A horde that controls at least one city can be negotiated with. This means that you can open diplomacy with it just like you would any other country, though the options you have when interacting with them are slightly different from those with other countries. 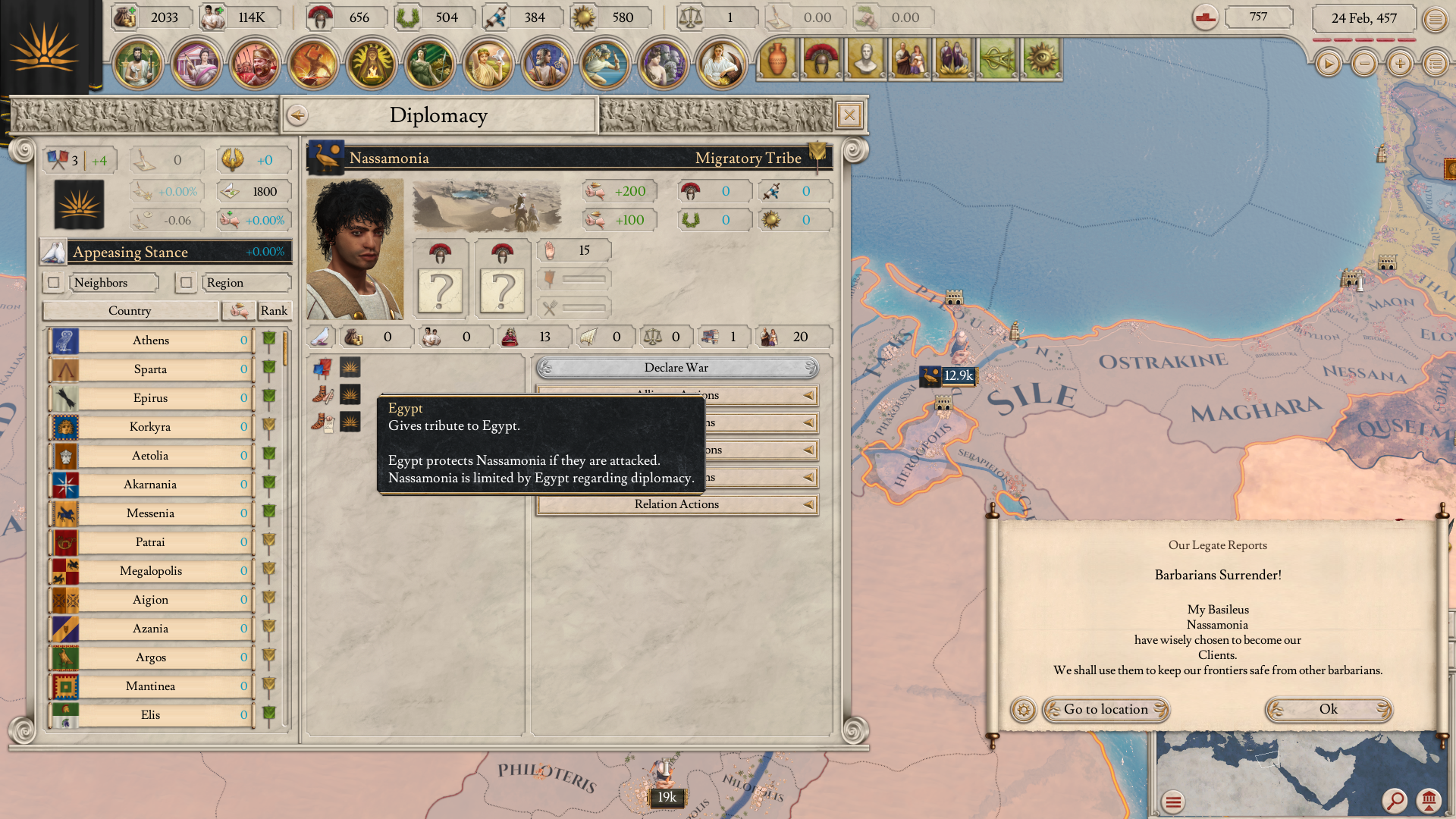 (A Barbarian Tributary has been created)​
Tibet: 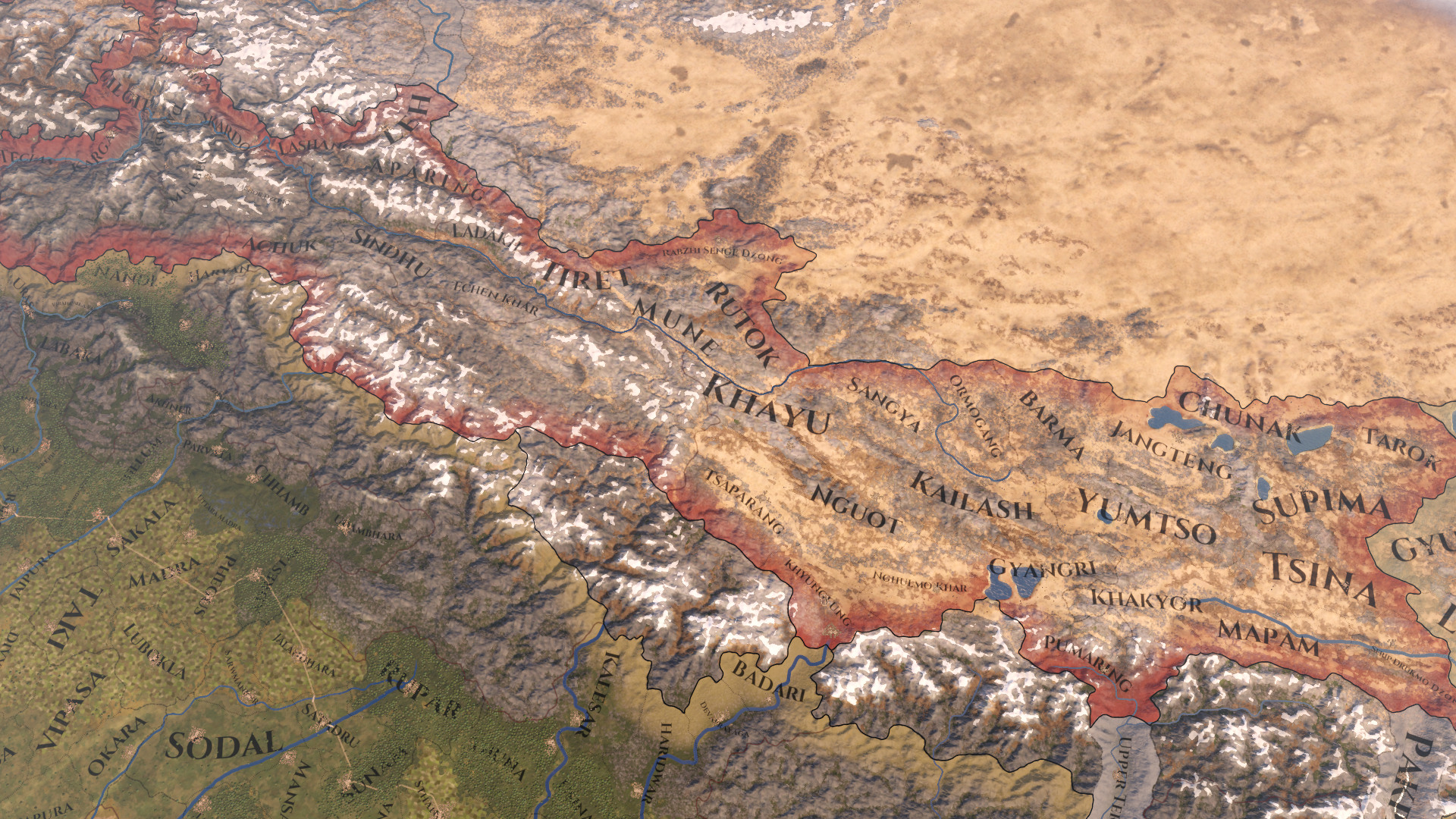 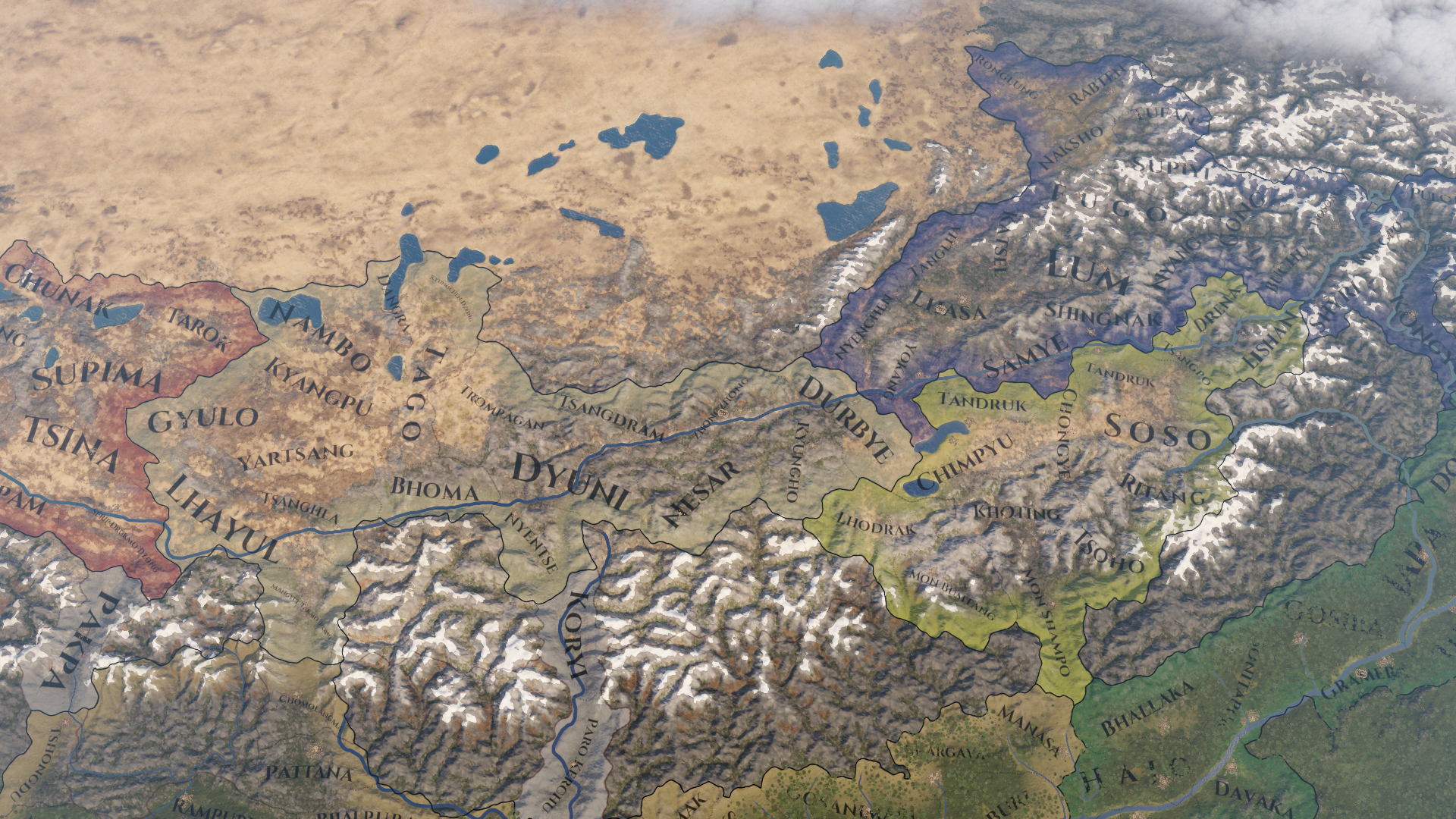 ​
High above the plains of Northern India and the great Maurya empire lies the Tibetan plateau. Then as well as now large parts of this region, especially the Changthang highland, was largely unsettled. But in the south there were a number of thriving societies, most prominently the dominant Zhangzhung kingdom which would remain the most influential state of Tibet for many centuries yet. Buddhism is still a young religion by the time our game starts and had still not spread to large numbers beyond India. The tibetan state in the game instead practice the Bon religion, which here represents the pre-buddhist Tibetan faith.

Tibet is also another region where I have to add a bit of a disclaimer. While we can be certain that this region was both populated and influential there is not a lot to go on when it comes to the details. Therefore what we have is extrapolated from later information to a large degree. 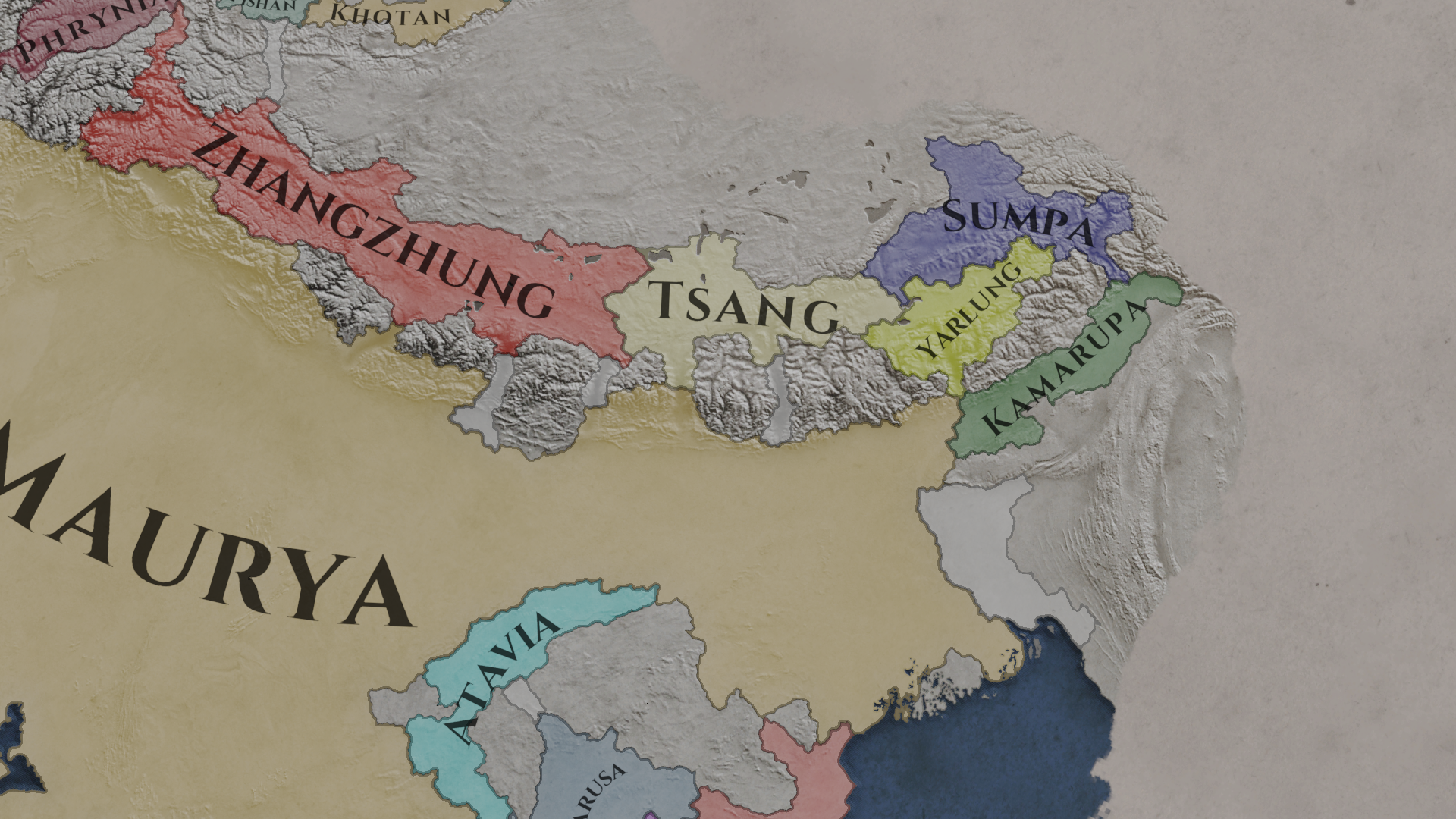 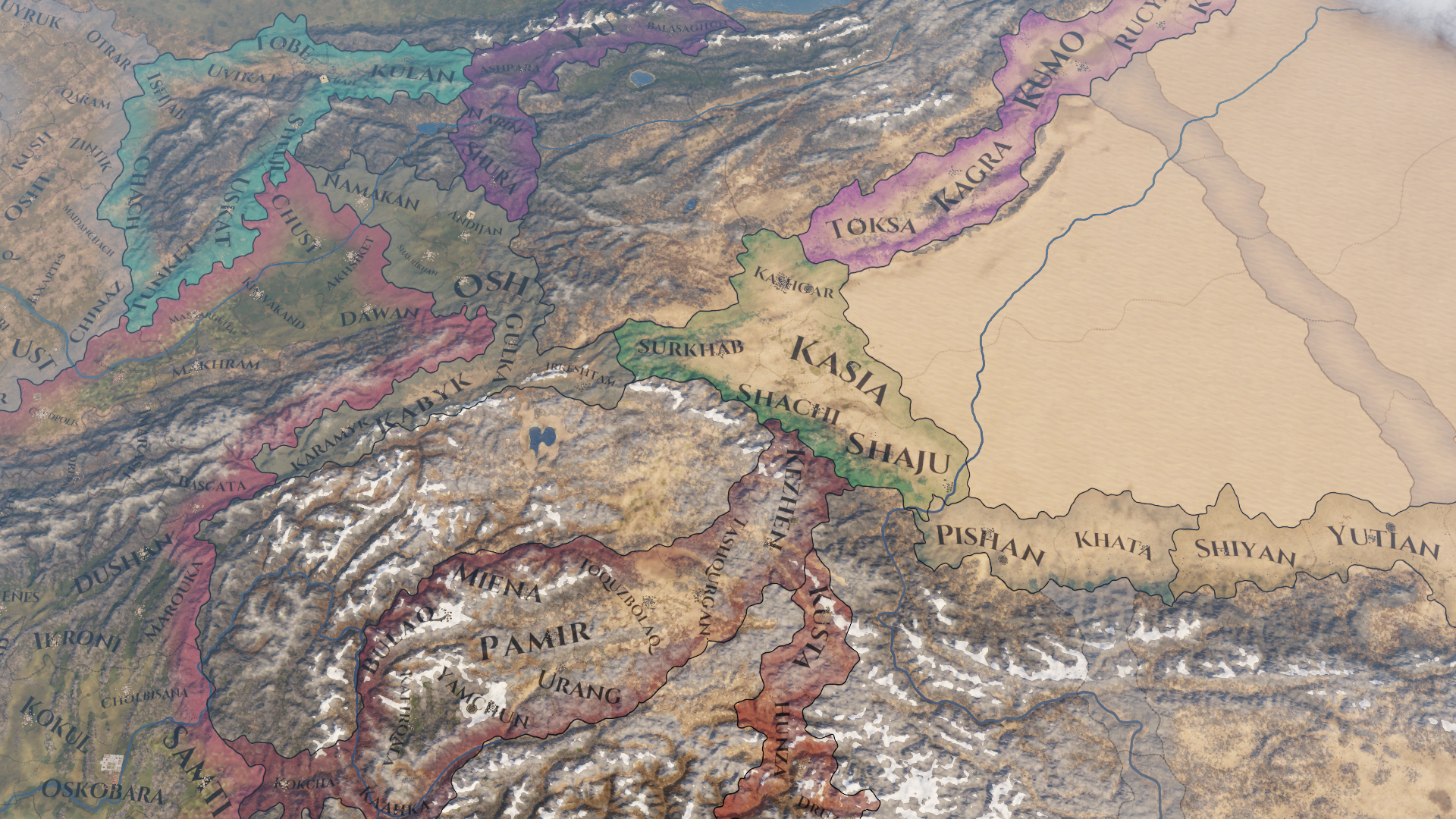 While we quickly touched on Sogdia, and the Ferghana valley in the Diary about Bactria, we now return here to look at the independent factions in this region. The center of Sogdia around Marakanda, later Samarkand, is in the hands of the Bactrian Greek Kingdom there are also independent states here. The Tarim Basin, with the harsh Taklamakan desert at its center, as well as Sogdia to its west would in time become important as an important transition point between China and the West. This region is central to what would become known as the Silk Road. While such trade surely existed to some degree already when our game starts it would not grow to be an important factor until later in time. 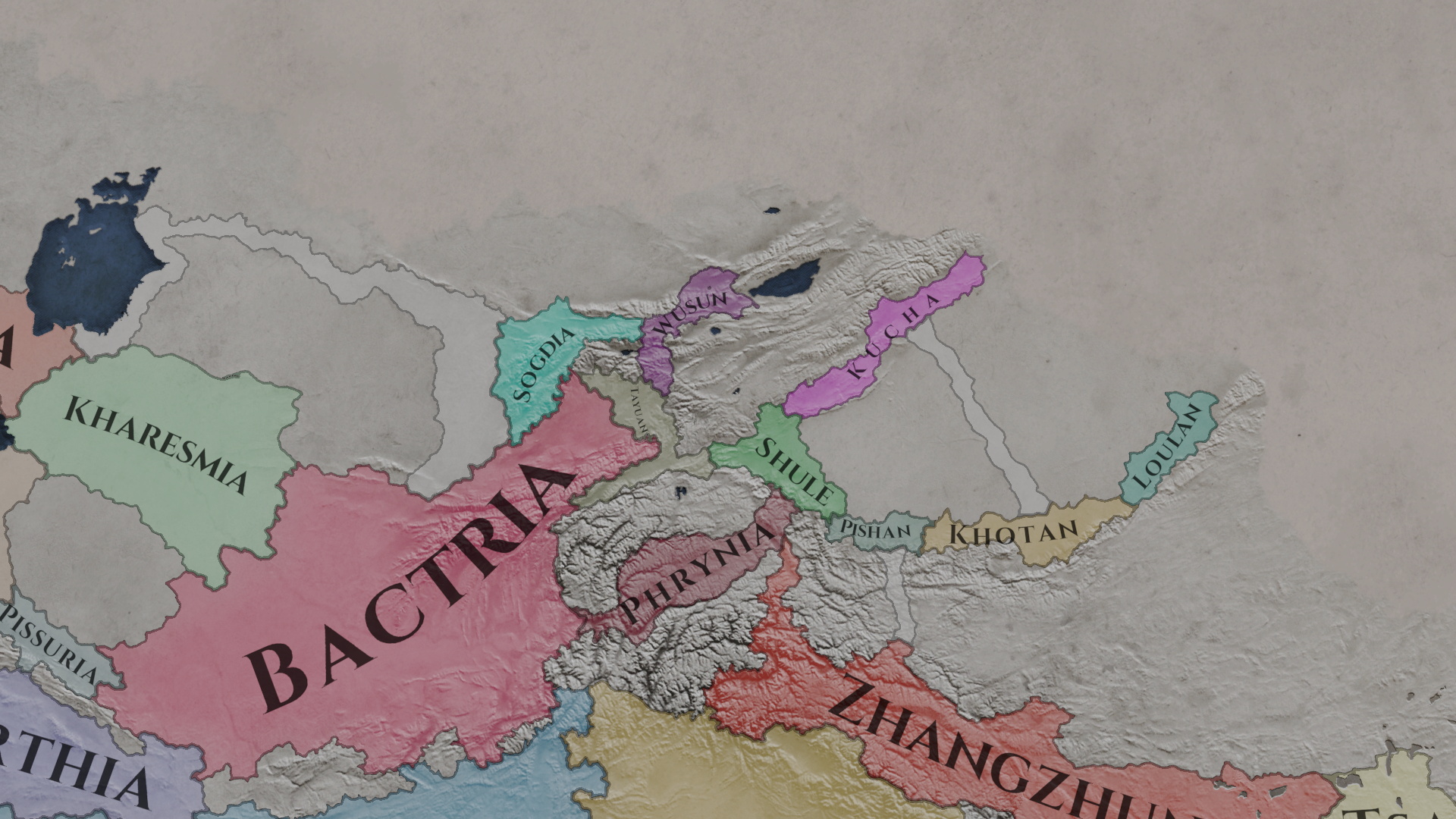 What exactly will happen once the modifier is removed? Are the areas just empty and unpassable or do the barbarians "settle" or something similar?

Triplebassist said:
What exactly will happen once the modifier is removed? Are the areas just empty and unpassable or do the barbarians "settle" or something similar?
Click to expand...

They will just be empty once they are completely gone. It will first reduce the strength of the modifier and later remove it though.
Toggle signature
No fighting in here! This is the war room!

Is this a April 1st, or real?
Toggle signature
#peacethroughpower

Wow, it seems that China also have a role in Imperator Rome.

tribnia said:
Wow, it seems that China also have a role in Imperator Rome.
Click to expand...

Not really at present. It is mentioned for background information for these countries but there is no direct influence from China in the game

Now the Yuezhi however, those guys might show up at some point...
Toggle signature
No fighting in here! This is the war room!

Why are the Germanics playable nations, rather than barbarians?
Toggle signature
"Timendi causa est nescire"

What Military Traditions do the Tibetans use?

Fimconte said:
Is this a April 1st, or real?
Click to expand...

There is nothing in the post suggesting it is an April 1st joke. It is a regular DD.
Toggle signature
Nationality: Croat
Religion: Roman Catholicism
Ideology: Rightist
Last Megacampaign: CK2 -> EU4 -> Vic2 - Crusader Panonians
Last EU4 playthroughs: France, Commonwealth
GENERATION 40: The first time you see this, copy it into your sig on any forum and add 1 to the generation. Social experiment.

An end game Chinese invasion should be a thing. After all, they started conquering the Tarim in the 1st century BC and that is part of the game's timeline.

Martynios said:
Why are the Germanics playable nations, rather than barbarians?
Click to expand...

Becuase it's more interesting if they are playable? Also this allows to replay Germanic migration. The Barbarians only represent mostly unorganized socities.
Toggle signature
Small Mods:

Trin Tragula said:
Not really at presnet. It is mentioned for background information for these countries but there is no direct influence from China in the game

You make me so happy.
M

Really like the barbarians system.It has some similarities with the Barbarians in Civ,especially for the barbarians power and barbarians strongholds mechanics.However,it sounds better than Civ because it is more deeper and complex.
Cordially.
P

What happens if/ is it possible that the barbarians “win”? Are they either defeated or negotiated with using those diplomatic options, or is there a scenario where they defeat a nation without becoming a tributary, tribesmen, or being defeated?

Thank you for the DD! I like the option to have diplomacy with barbarians (I hope they will find translators, though). But somewhat, there are a few things that I was anticipating, and had a preference for, before reading that DD: the random component of barbarians. Now that we see the numbers about their power and spawn likelihood, it seems like barbarians spawning is getting less random and that the player can have some control over it. I want my barbarians more unpredictable!

And I'm less sure about the consistency of having unpassable terrain... where barbarians come from. If they can, why can't the players? I can understand that barbarians are roaming through these lands (they take risks that nations don't take, or have developed abilities that nations have not developed), but now it looks like they are settled there, permanently. I don't understand why an army couldn't move there.

That being said, I continue to love the barbarians mechanics, it's one great addition to the game. And I like how it changes one's strategy, as it becomes more important to keep armies across one's territory.
Last edited: Apr 1, 2019
Toggle signature
Some of my suggestions for EU4:

Trin Tragula said:
Not really at presnet. It is mentioned for background information for these countries but there is no direct influence from China in the game

Would you ever consider a future DLC which expands the borders of the map to include China? This game has perfect mechanics to feature Warring-States China and ignoring such a significant region seems like a terrible decision.

Once the modifier has been removed is it possible for it to return if the civilisation level gets low enough?
Toggle signature
https://forum.paradoxplaza.com/foru...g-recommendations-list.1164308/#post-25314045 - My reading/watching recommendations for Imperator

@Trin Tragula
Create Client: Offer the barbarians to form a new Tributary State with the land they currently hold in the country. The new country will be a tribal chiefdom of the same culture and religion as the location the barbarian horde spawned in.

Is this also possible if they occupy foreign land/cities?
So if Barabarians occupy a city in Gaul, can i offer them the "protection" of Rome?
Toggle signature
Imperator Rome - Tyson_Mod Collection- Balance & more...
https://steamcommunity.com/sharedfiles/filedetails/?id=2221876224

I'll wait to see how this plays out in game, but my experience with spawned barbarians in EU:Rome was one of constant annoyance. Didn't find them engaging or interesting at all. In that game though, so much of the map was uninhabited. At least in I:R these seem like relatively small stacks that spawn, there's some predictability to their spawning, and some sense to where they come from. I hope these barbarians can use regional unit models depending on their region/culture instead of that Germanic-looking dude in Egypt.

In any case, I wrote a topic time ago about adding a Barbarian Stronghold in Iberia. I really hope this could be implemented (and my other suggestions for Iberia too.)