Jump to latest Follow Reply
Menu
Install the app
You are using an out of date browser. It may not display this or other websites correctly.
You should upgrade or use an alternative browser.
Imperator: Rome 8877 Bug Reports 3643 Suggestions 2383 User Mods 638 Tech Support 497 Multiplayer 56 After Action Report (AAR)
Show only dev responses

Hello and welcome to the 17th development diary for Imperator. This time we’ll talk a bit more about characters and how you interact with them

Back in the 7th development diary we talked about Characters for the first time and talked about their attributes, traits and stats. If you haven’t read it yet, I recommend going back to read it HERE.

We did not talk about health in that development diary, except mentioning the fact that one of the categories for traits were health-related. In the original Rome 1 & in the Crusader Kings series, health is a hidden value that the player never sees, which impacts hidden probabilities of when you die.

In Imperator health is a value between 0 and 100, and when it reaches 0, that character dies. Health related traits affects this each month, but don’t expect that a brain-damaged frail leper to have a long life-expectancy.

Holdings is another thing I promised to talk about. Each character can have holdings in one city. A governor picks a city in the province she is governing as where he’ll have his holdings, while a general picks one from the cities he may have conquered. A character with a holding will get income from that city until death, or until otherwise forced to relinquish it.

Income ties into another concept I’d like to touch upon in today’s diary, ie Wealth. Each character have a pool of money that they may use to their own benefit. Characters gain money, if they have an office that pays them, or if they are a governor that can use their corruption to enrich themselves, or if they have holdings. 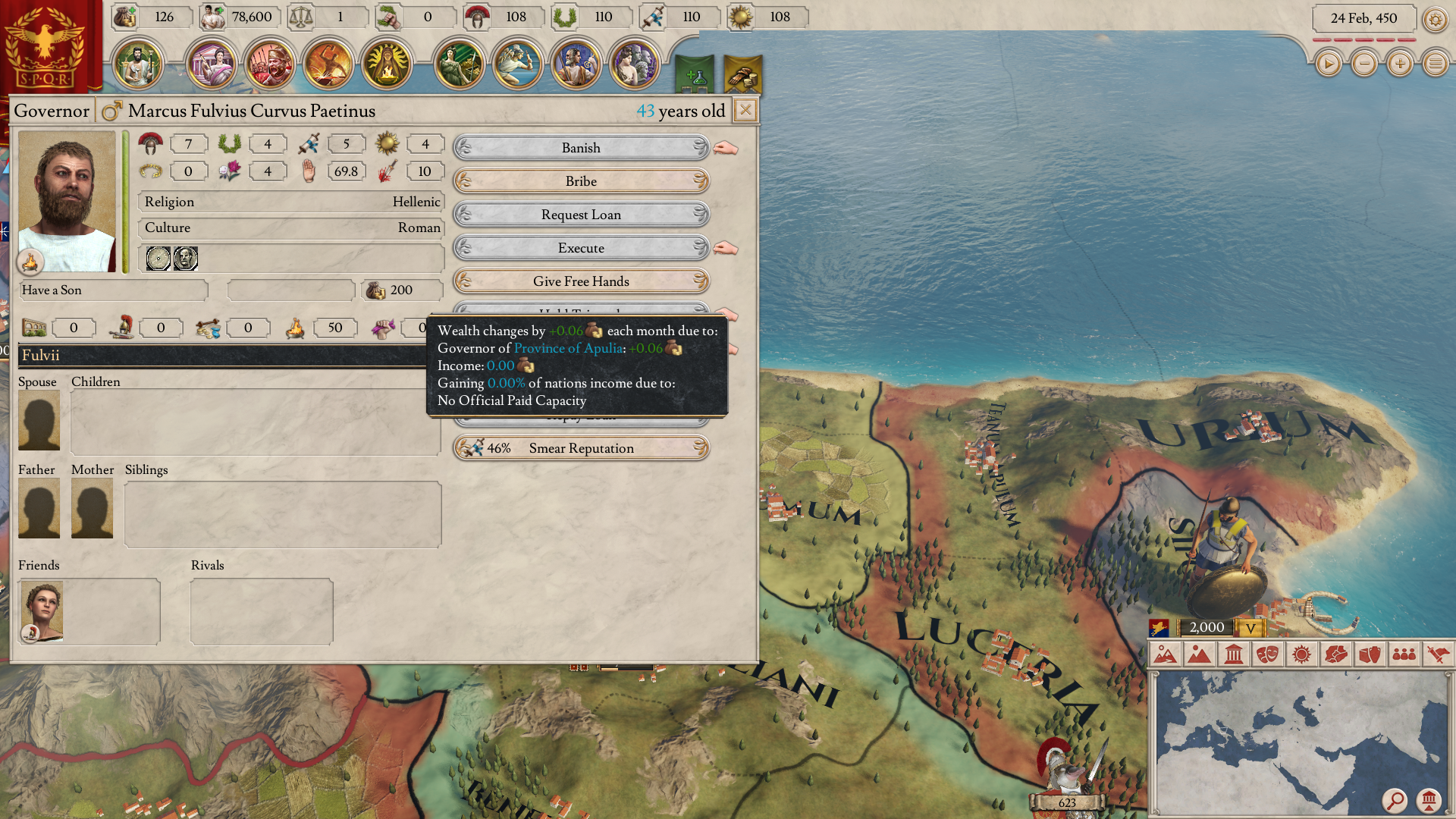 So how do you interact with these characters then? Well, Imperator has lots of different ways, besides the normal event interactions like most of our games, we also have the direct character interactions..

Character Interactions usually have costs in power and or gold, and some have different chance of success as well, and in Republics, some of the character interactions require senate approval as well.

There may be more interactions added through development, and they are 100% created by scriptfiles., and here is an example of the simple Hold Triumph interaction.

Stay tuned, there are more things to talk about characters in Imperator, like ambitions and loyalty, but next week we'll go into the Latin Military Traditions.
Toggle signature
Johan Andersson
Studio Manager Paradox Tinto - Follow me at Twitter!

Will other republic nations be eligible to appoint dictators or does it only work for the Roman Republic?
Toggle signature
Inter arma enim silent leges


Johan said:
Seduce Governor - Convincing a foreign governor that it’s far better to officially say they are part of your nation, while they regretfully report that about 105% of all collected taxes were lost due to bad harvests and bandits to your government.
Click to expand...

Shouldn't this be "Sway Governor" rather than "Seduce"?
Toggle signature
Pssst hey kid, you want some DLCs? First one's free

I hate the funimation dub of the dev diaries!

Darth. said:
Shouldn't this be "Sway Governor" rather than "Seduce"?
Click to expand...

But of course not, don't be so silly! That would be both uncivilized and barbaric. Here's the correct etiquette:
There you go. Problem solved with justice, politeness, and Finesse.

Liberals? Not in my Imperium!

Hopefully governors will choose sensible cities to be the capital of their regions, I'd rather not see say some random town be the capital of a region instead of say the more well known cities. In CK it usually led to dukes and kings constantly revoking counties because they kept giving away their own dejure capital for no reason in earlier versions of the game.
Toggle signature
Imperia Surgere et Cadere, Ego non Facio

SRM = "Yeah. Seducer/Seductress is just getting people in bed. Hedonist is reclining on a bed made of slave girls painted with gold dust while eating chocolate covered grapes off of your concubines' chests and watching your least favorite sister get tag-teamed by farm animals. Seduction focus is nothing in comparison"
S

jnt.mullen said:
I see that the player will know a character's parents/children/siblings/etc., but will characters have family trees we can access? I'd love to be able to follow family lines through the centuries.
Click to expand...

Indeed. Memo to self: remember to Execute any Julii that come along.

Those interactions look really fun. The character system looks to be one of my favorite parts of this game.
Toggle signature
GENERATION 38: The first time you see this, copy it into your sig on any forum and add 1 to the generation. Social experiment.

Darth. said:
Shouldn't this be "Sway Governor" rather than "Seduce"?
Click to expand...

Great to see so many options for interacting with characters! I particularly like the options to interact with foreign characters. Those will add some less direct and more creative ways to aid in the defeat of an enemy.

Johan said:
Holdings is another thing I promised to talk about. Each character can have holdings in one city. A governor picks a city in the province she is governing as where he’ll have his holdings, while a general picks one from the cities he may have conquered. A character with a holding will get income from that city until death, or until otherwise forced to relinquish it.
Click to expand...

I love every bit of this DD.

Will ‘marriages are between opposite gendered characters’ be hardcoded or will we be able to change that via script?

Recruit General - Get a disloyal foreign general to leave his nation and join your nation. With his army.
Click to expand...

Wow, now THAT's interesting. Can you do it when at war with the general's owner? That could make keeping happy generals very important.

A marriage in this time-period, for the classes relevant to be unique characters, is purely to produce legitimate heir.
Click to expand...

Will it at least be possible to change it via modding? Some mods could need it
Toggle signature
Dr. Klen'Moral Observations on the effects of isolation on Hive-Minded drones - A Stellaris scientific report

I can't see the option to adopt a character from another important family in order to create an heir if you are unable to do so.

LeSingeAffame said:
Will it at least be possible to change it via modding? Some mods could need it
Click to expand...

yes, you can mod actions to do whatever you want.
Toggle signature
Johan Andersson
Studio Manager Paradox Tinto - Follow me at Twitter!