Jump to latest Follow Reply
Menu
Install the app
You are using an out of date browser. It may not display this or other websites correctly.
You should upgrade or use an alternative browser.
Imperator: Rome 8870 Bug Reports 3643 Suggestions 2380 User Mods 633 Tech Support 496 Multiplayer 56 After Action Report (AAR)
Show only dev responses

Hello everyone and welcome to the 16th development diary for Imperator! This time we’ll look at a few smaller things.


First of all, we have the road building ability, which is unlocked in the Latin Military Traditions, by the 4th tradition in the Roman path.

Any army with that tradition and at least 5 cohorts will be able to start building a road towards another city. The movement will be delayed to 20% of normal speed, and the morale is severely reduced as well. When the army reaches the next city, a permanent road is created, giving a movement speed boost of 50% between those two cities. 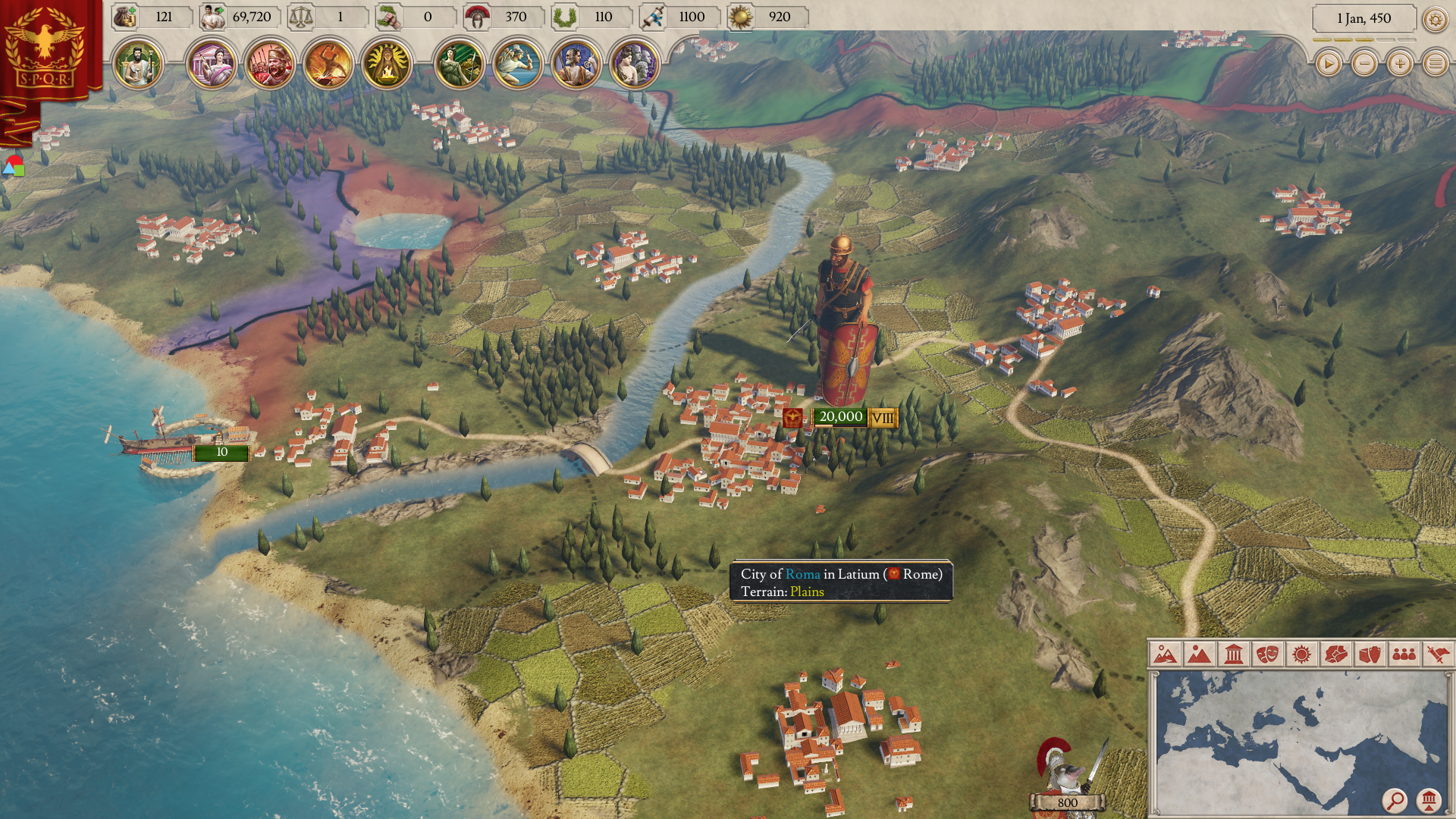 All road are drawn on the map, adding bridges as they cross rivers. 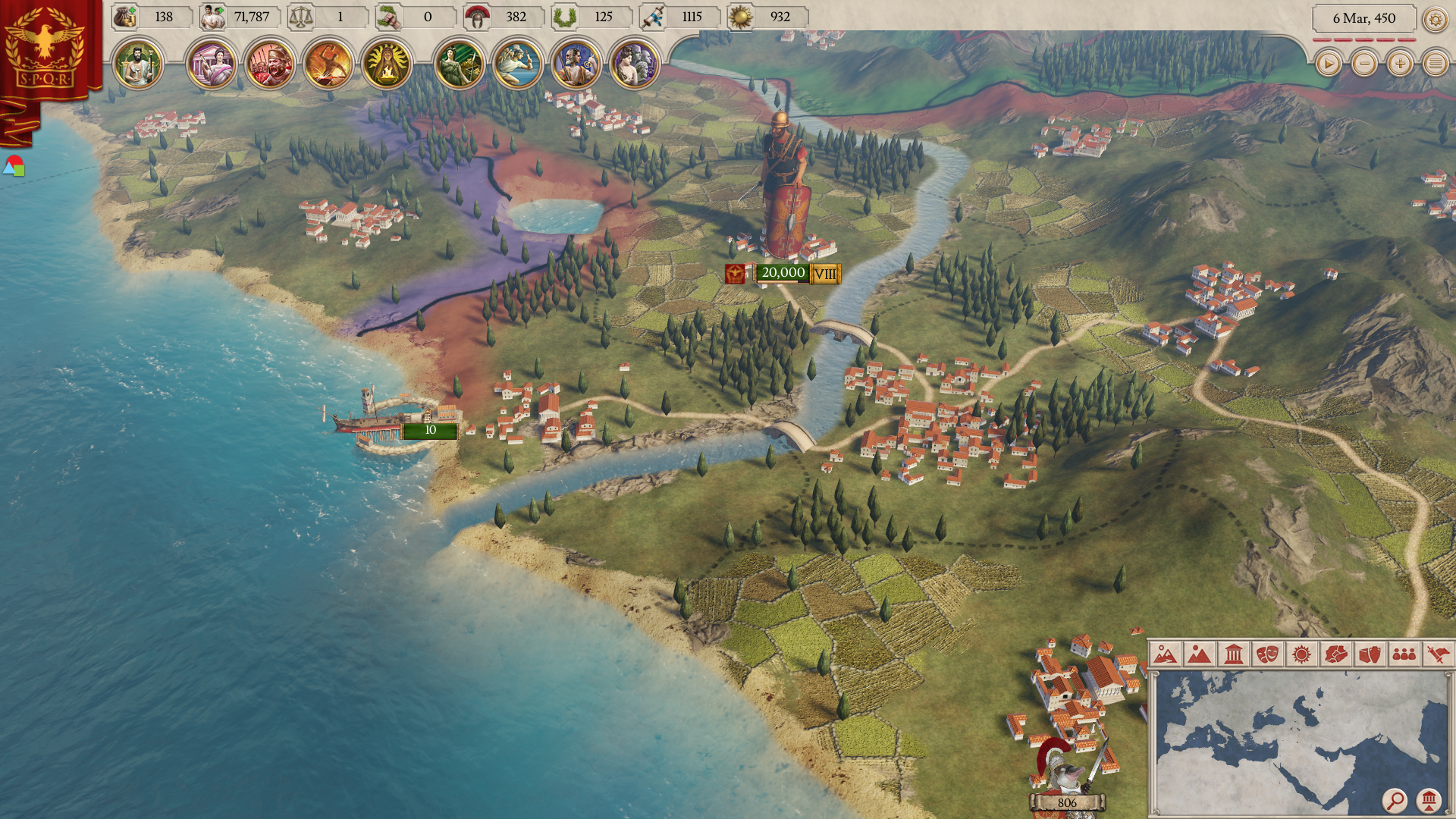 Secondly, how unrest works have completely changed from Rome1. Unrest no longer impacts a risk of a rebel unit spawning. Infact, there is no such thing s a rebel unit in Imperator. Unrest instead impact the loyalty of the province, which in the end may cause a Civil War or an Independence War. 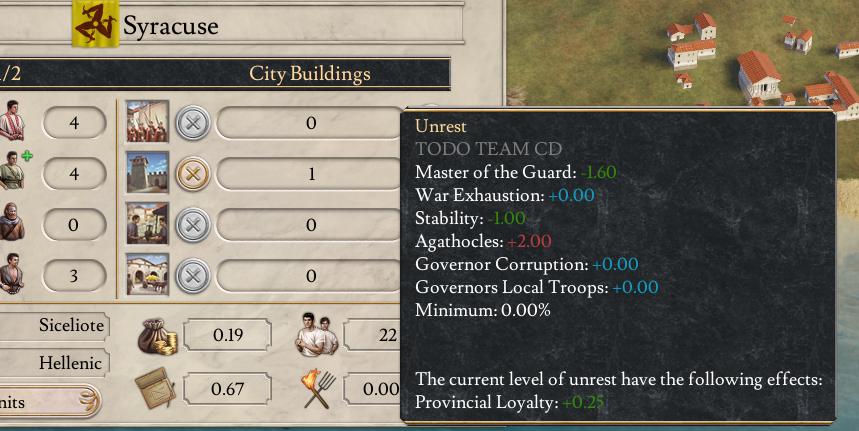 This will make large rebellions more interesting, and remove the disbalance where Rebel units always have larger numbers than real armies in our other games.


Thirdly, each nation will have a civilization level, which depends on their type of government and technology levels. Each city will slowly increase to that cap, or decay if above it. So civilizing barbarian frontiers is a long-term process.

Are there any drawbacks to having roads (apart from the 'cost' of needing armies)? Like maintenance or such? Any economic benefits?

Is it also possible for non-Latin cultures to gain Latin military traditions and be able to build roads?
Toggle signature
CKDV maps to reorganise your empire and create new titles:
Map with duchies
Map with kingdoms

Couple Qs though:
1) Is it possible to build roads without grabbing Roman Military Traditions?
2) What does Civilisation Value do?
B

So does that mean only nations with the Latin Military tree can build roads ?

This game looks more and more amazing. I really love that roads are actually represented on the map. Great job.

Do some of the other Traditions also have road-building ability? It seems a bit iffy to me that only Italians could build quality roads when at least some other states should have this same ability.
Toggle signature
Nationality: Croat
Religion: Roman Catholicism
Ideology: Rightist
Last Megacampaign: CK2 -> EU4 -> Vic2 - Crusader Panonians
Last EU4 playthroughs: France, Commonwealth
GENERATION 40: The first time you see this, copy it into your sig on any forum and add 1 to the generation. Social experiment.

Why we need armies to build roads? Why can't we just order them via province menu, like in HoI?

Aquilegia said:
Is it also possible for non-Latin cultures to gain Latin military traditions and be able to build roads?
Click to expand...

"Roads? What is it? No, we Hellenes do not have such things, its purely Roman nonsense!" - Greek said)
Toggle signature
"Mao - on umudohal millioni!"
- V.Sorokin

Exteremely hyped by the change in rebel treatment ! It seems more realistic and waaaayyy more interesting by the "traditional" Paradox handling of rebel spawn.

I always wanted something similar for EU4 : Imagine the possibilities for example cities that declare independence / start civil war can enter alliances with other rebelling cities / external threats during their independence war!

I hope that there will be some downsides of having advanced infrastructure, like the need for upkeep, repairs, etc. I:R will have so shallow building system that it should better have advanced mechanics behind every building. If not then meh...
Toggle signature
The cake is a lie.

Do cities have wall graphics? It would be jarring if they didn't.

How can you build roads without the military? It would be kinda ridiculous if the only ones who could do it are Romans,
and via the army only as well.
Last edited: Sep 10, 2018

A really big, genuine, thank you from me and I'm sure from many others for trying to get rid of the rebel mechanics held over from the EU era. They were really starting to show their age and never worked once the player progressed past a certain point.

If you can get this to function correctly, having whole nation tags succeed at a time and forming alliances with your rivals to try and stay independent in the ensuing war sounds much more realistic, engaging, and flexible to balance and build on.

I look forward to seeing it in action.

The new revolt system sounds great. EU4 revolts are mostly just little whack a moles you have to defeat before they enforce demands. This system looks way more historically accurate and engaging. I am excited for more details!

The roadbuilding reminds me of Civilization, I like it.
D

The global civilization value sound like a good idea because the EU: Rome system became quite Micro Heavy with trade routes to spread civilization. Now you just have to wait to slowly reach your cap.
M

Civilization V and VI.
Toggle signature
Sit now there, and look out upon the lands where evil and despair shall come to those whom thou allied. Thou hast dared to mock me, and to question the power of France, master of the fates of Europe. Therefore with my explorers thou shalt see, and with my spies thou shalt hear; and never shall thou be released from vassalage until all is fulfilled unto its bitter end.