Menu
Install the app
You are using an out of date browser. It may not display this or other websites correctly.
You should upgrade or use an alternative browser.
Imperator: Rome 8552 Bug Reports 3579 Suggestions 2296 User Mods 578 Tech Support 482 Multiplayer 54 After Action Report (AAR)
Show only dev responses

Hi everyone and welcome to the fifteenth development diary for Imperator. This time it is about a feature that does not correspond to anything we’ve had in the original Rome, which is our new Military Traditions system.

There are seven different military traditions in the world, tied to which culture-group you have, and due to the size of the traditions and how they are structured you will see rather different and unique nations.

Each Military Tradition has one bonus they get from the start, and then three different paths they can go down through, where after you have picked the seventh tradition in that path, you’ll get the a special benefit for that as well.

It is not very likely you will get to the end of all paths by the end of the game, so you really have to think about which path you want to progress down through first. One military tradition currently costs 800 military power, and each tradition taken increases the cost by 50%, and each military technology level reduces it by 25%.

Today we’ll take a look at the Barbarian military tradition, which is used most cultures in north-western Europe.

They all start with the bonus to unlock Chariots as a unit. Chariots are relatively cheap, and faster than infantry, and utterly destroys light infantry on the battlefield.

The first path of the Barbarian Traditions is the Britannic Path.
End bonus for this path is ‘Trained Cavalry’ which gives +15% Discipline to both Light Cavalry and Chariots.


The second path of the Barbarian Traditions is the Germanic Path.
End bonus for this path is ‘Adaptability’, which gives +15% Discipline to Light Infantry.


The third path of the Barbarian Traditions is the Gallic Path.
End bonus for this path is ‘Blow the Trumpet, in the New Moon!’, which gives +10% Land Morale. 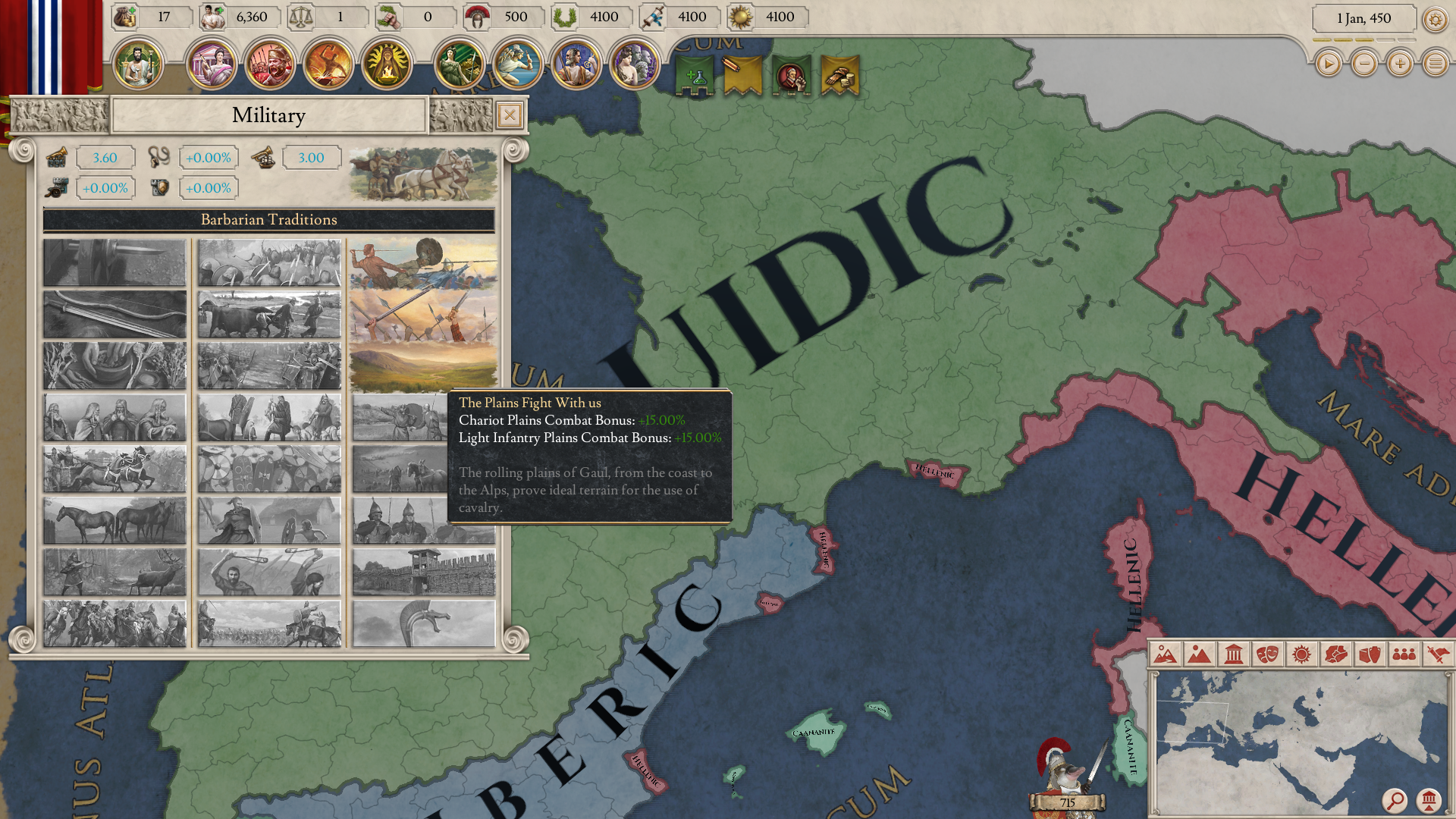 Next week we’ll be looking into where all roads lead.
Toggle signature
Johan Andersson
Studio Manager Paradox Tinto - Follow me at Twitter!

Very interesting, hopefully this gives some diversity to a world which would be very easy to make generic in so many places. I guess this is sort of like military tech then.
Toggle signature
signatures are stupid and antiquated

But will my Ptolemaic Egyptian army have Macedonic Phalanx & Celtic warriors? Like they did historically. Why does it say better combat for cavalry but the bonus is to chariots and light infantry?
Toggle signature
Byzantine.Hellenistic.Ottoman.Sogdian​

A thousand roads lead men forever to Rome. A good start on the traditions, but I sure do hope that the Italic tribes have their own unique ideas! I want to be able to play as Socii and earn many boons for my years of loyal roman subservience.

Lots of art in the game with every tradition having its small artwork.
Also seems to be more art for other things.
I like it!

So it seems: Britain’s focuses on cavalry, Germany on light infantry and France on quantity and quality
Toggle signature
Byzantine.Hellenistic.Ottoman.Sogdian​

In the screenshot you posted on your twitter, there were glints of new unit models ( celtic/british )
Could we get a better look of those, pretty please
Toggle signature
*Always trying to get better at art 'n stuff* Kiss Me Once Shame On You, Kiss Me Twice Let's Party!!!!!

Do any of these traditions spawn Rome's elusive and necessary second consul?
Toggle signature
Furthermore, Paradox, The Kingdom of Sparta has two kings.

I quite like it. It's like ideas from EU4 but they are more synergous (is that a word?) with your tech, due to the cost of the "ideas". Looking forward to playing with this system. I can't imagine I'll ever be taking one of those traditions at full price though, the boni don't look good enough to cost 800 points.
Toggle signature
I play Paradox games on youtube, check me out here if you like: Lord Lambert​

*which is just BY

Sounds interesting. Cannot wait to play it to find out how it actually works in the game.
Toggle signature
I was imagining Petrarch sobbing whilst a mad Irishman hacked repeatedly at the corpse of Nigel Farage, mutilating it still further. Meanwhile, an Ulsterman dressed entirely in orange yelled that the Irishman was actually English, and less Irish than him. - DoomBunny
To be honest I kinda like being a woman. - Lord Finnish
I have the social capabilities of a carrot - LYNCHY
War is dark and full of horror. But there's an unshakable tinge of honor and glory from time to time. - DarthShizNit

Lambert2191 said:
I quite like it. It's like ideas from EU4 but they are more synergous (is that a word?) with your tech, due to the cost of the "ideas". Looking forward to playing with this system. I can't imagine I'll ever be taking one of those traditions at full price though, the boni don't look good enough to cost 800 points.
Click to expand...

Do we even know if 800 points are THAT much?
Toggle signature
Small Mods:

Thure said:
Do we even know if 800 points are THAT much?
Click to expand...

Base points produced are 2 as opposed to EU4's 3. 800 MP is likely worth much more than EU4
Toggle signature
Pssst hey kid, you want some DLCs? First one's free

Yes but attributes are also not capped at 6.

How modable are traditions as far as making additional paths to go down? Could we make 20 different paths if we wanted to? The UI seems rather restrictive from that screenshot

1. Can we change the military traditions during the course of game? (For example to 'portray' Romanization or Hellenization of our armies) - or is it something that can't be changed? Can the potential change be modded?

Pumping up your military traditions seems like something you're probably not going to do until the cost is low, but if you temporarily have a strong military leader and end up with an excess of points you can temporarily get ahead of the curve a bit. An interesting system, which should hopefully make it more difficult for the player to get a huge edge over the AI in terms of army quality compared to in EU4.
Show hidden low quality content
You must log in or register to reply here.
Share:
Facebook Twitter Reddit Tumblr WhatsApp Share Link
Top Bottom