Hello everyone and welcome to another development diary for Imperator! Today we’ll delve into what we call unit-abilities, and also show off some interesting and fun modding mechanics.

What we call unit-abilities in Imperator can be one of three categories, where some of them are hardcoded like moving cohorts between legions or detaching a siege force, while others are fully 100% done through our script.

Please be aware that cohorts that are loyal to its commanders will not be possible to reorganise away from that commander.


Some of these are unlocked by different military traditions, and some of them are always available, and some toggles have a small military power cost.


Some of these are unlocked by different military traditions, and some of them are always available. 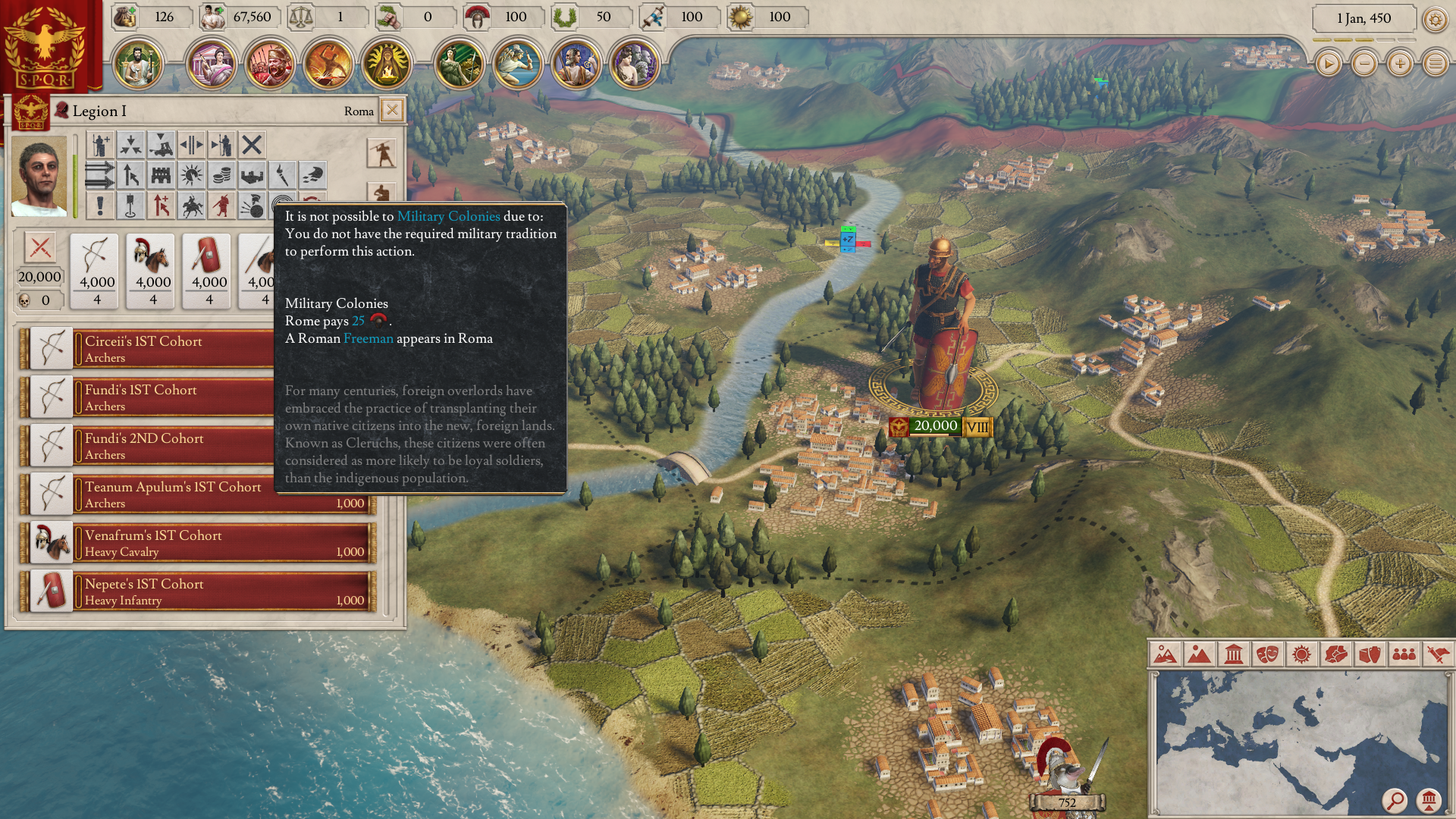 So, making lots of these scriptable was possible due to the new super-powerful scripting tools of Jomini, which is the game-mechanics layer we have on top of Clausewitz these days.

We have some nice ways to get dynamic values in effects, like this in the raiding mechanics. You can basically access any “trigger” from any scope you can switch to as a value and modify with each other.

We can also do loops, which is used in the levies.

Code:
And for those of you that modded previous games, and know about city, character and country scopes, will be happy to know that Imperator has those and far more, like unit scope, pop scope, party scope, etc..

Next week, we'll be back with a look at the technology system!
Toggle signature
Johan Andersson
Studio Manager Paradox Tinto - Follow me at Twitter!

Nice! I particularly like the old EU:R feature of units becoming loyal to a general. And of course the new modding capabilities, even if I will not be able to muster dedication to mod myself for yet another game.

Legion is another name for army?
Toggle signature
Check out my two total overhaul mods for EU4 v1.12.2, both set in the ancient era!

"Phalanx" confuses me.
Army moves slower in exchange to bonus to defense? What? Does that means army marches in formation all the time?
This sounds like an annoying micro. You just swap army to Phalanx before each battle, then curse and reload when you didn't click button in time.
Toggle signature
“Evil cannot create anything new, they can only corrupt and ruin what good forces have invented or made.”

Tactics and stances are separate from toggles and will be covered in the future DD?

I love that we're getting more mechanics which increase focus on tactical control of armies, but I worry a little about potential cumbersome micro which does not require much thinking, like:
I'm expecting this area to be tweaked every other patch

But tying the army system in with country tech and traditions can open up a lot of cool military styles which change how you wage your war campaigns and even how you manage your diplomacy - kinda like how doctrines characterized your military in HoI.

I'm pretty excited to try this system out (as well as the trade management).
Toggle signature
~My old signature took up too much space, so I made this one.

Johan you're the best!

From what little we know of the tech system I reckon it's gonna be awesome, but it's also one of the systems most likely to be a bit of a flop upon release.

New stuff is always hard to get right.
Toggle signature
PDS Rules of Thumb:
A Patch/DLC bundle is NEVER Savegame compatible.
There is NO Mod that can update upon day of Patch/DLC release.
Jupiter is a yandere.- aruon
I'm just Danish. Mistrusting Sweden is my default setting.--Moglus

Excited about the new modding capabilities!

So much micro
Toggle signature
https://forum.paradoxplaza.com/forum/index.php?threads/division-commanders.1368762/

Mackus said:
"Phalanx" confuses me.
Army moves slower in exchange to bonus to defense? What? Does that means army marches in formation all the time?
This sounds like an annoying micro. You just swap army to Phalanx before each battle, then curse and reload when you didn't click button in time.
Click to expand...

Ignoring the micro issue, I'm more interested in where those freemen POPs come from in the case of border forts and military colonies. Are they pulled from the nearest province, or do they spawn from the aether?
Toggle signature
Fan of the Week for AARland for the week of 3/29/15

Johan said:
Please be aware that cohorts that are loyal to its commanders will not be possible to reorganise away from that commander.
Click to expand...

This sounds interesting, suggesting that cohorts (Imperators term for 1,000 men) will have loyalty. I like it, might stop the general teleportation present in other games.


Mackus said:
"Phalanx" confuses me.
Army moves slower in exchange to bonus to defense? What? Does that means army marches in formation all the time?
This sounds like an annoying micro. You just swap army to Phalanx before each battle, then curse and reload when you didn't click button in time.
Click to expand...

If you recall the dev diary about units, it heavily implied there that speed is a function of combat

Toggle signature
I play Paradox games on youtube, check me out here if you like: Lord Lambert​

I feel military colonies should only be usable in territories where your primary culture is in minority rather than allow spawning pops in developed cities. That's the point of the military colony, no? To gradually assimilate a hostile land, not be a general pop growth policy.

Seems to me like military colonies should reduce the manpower of the current army, in exchange for civilised pops in recently conquered lands. This should not require mana, but you shouldn't be able to spam it, because it makes soldiers/general cranky if you keep drafting them back after you give them new land (also, you have finite manpower). If a general is near areas he has used military colonies on and attempts to march on Rome (or whatever area the senate so decides he not allowed to do so) he can recruit back men from these colonies to create a larger army, with asssociated veterancy traits for the soldiers (perhaps a malus if it is a long period after, for older legionaries?)

Why not have a "Battle Tactics/Doctrine" button where you can select a battlefield formation for your army that gives them specific boosts to said army's composition.
Say you want a flexible offensive formation for your roman legion, choose the Triplex Axis Formation and select the Manipule Organization. This wont just randomly give your army a map movement debuff for no reason and will actually be more realistic.
If you want to add further flavour lock these tactics and organizations per culture and or goverment
Toggle signature
“Language is always the companion of Empire and Empire . . . is one Monarch and one Sword.”
― Carlos Fuentes, Christopher Unborn
“Only he who has no use for the empire is fit to be entrusted with it.”
― Zhuangzi, The Complete Works of Chuang Tzu
“There are no moral obligations in the game of empire.”
― A. H. Septimius

Sounds very nice, the tactics are a welcome addition to reduce the randomness of previous titles battles.

Looking forward to see how technology will affect unit quality and type.
J

Johan said:
Please be aware that cohorts that are loyal to its commanders will not be possible to reorganise away from that commander.
Click to expand...

Wow, so many questions and possibilities.

Does the above affect movement in both the map and in combat?


Johan said:
Unit Reorganisation - Double Maintenance and Slow movement speed, but unit reinforcing and morale recovery is much faster. Without using this, units recover slower than in previous games.
Click to expand...

Is this something like EU4 army tradition or is it Imperator's name for Military Tech?

[/QUOTE]
I feel like this should have additional requirements of money and manpower alongside the mil power requirement.
Overall, VERY IMPRESSED! Keep it up! Can't wait to see what else's in store.