Jump to latest Follow Reply
Menu
Install the app
You are using an out of date browser. It may not display this or other websites correctly.
You should upgrade or use an alternative browser.
Imperator: Rome 8725 Bug Reports 3609 Suggestions 2351 User Mods 605 Tech Support 487 Multiplayer 55 After Action Report (AAR)
Showing developer posts only. Show all posts in this thread.
Show all posts

Hello and welcome to this developer diary for the Pompey patch! Today I will be talking about more changes coming to the naval part of the game (the general rework of naval combat can be found here), as I will cover Storms and Pirates, as well as some more historical and geographic flavor in the form of added events as well as the new on map Volcanoes. 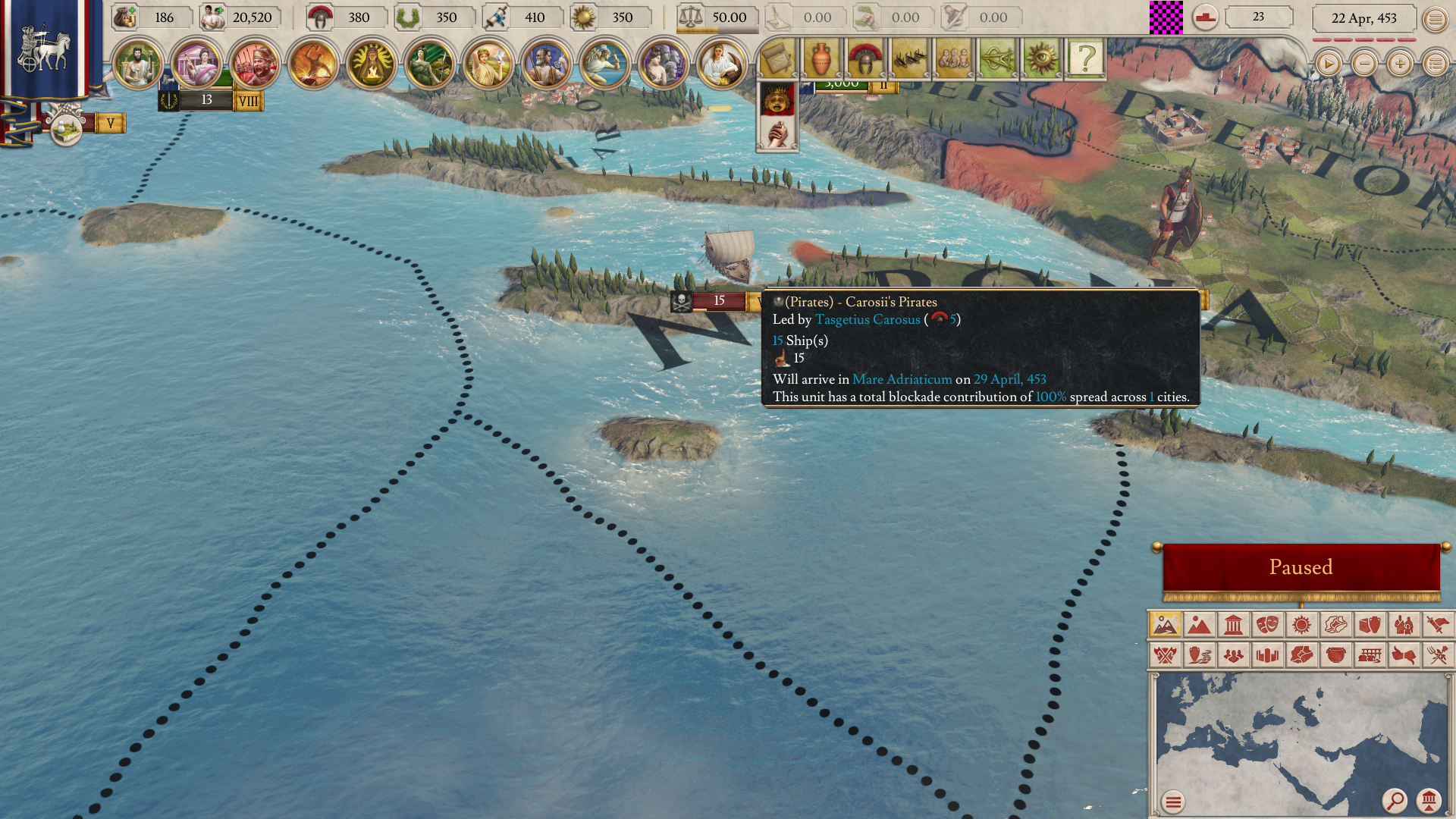 In Imperator: Rome pirates spawn and block ports indefinitely, this is a nuisance for the strong, and very disruptive to those who are weak with no navy as they block their ability to “break free” from their home ports. Apart from laws blocking the creation of pirates from your own ports entirely, or permanently placing a fleet outside your ports there is little you can do to stop them. Meaning your options are to withstand constant penalties or turn them off completely. Neither is very engaging.


The aim for Pompey patch has therefore been an implementation of pirates that:


Hellenistic Era Pirates in history:
​
Contrary to what one might expect Pirates in this era was frequently employed as seaside mercenaries to supplement the regular navy. They were not small individual groups with a ship but would rather often be a group of ships (sometimes a very large group), with a commander and seaside plunder and warfare as their way of life. Usually they would be hired, just like mercenaries, to augment forces in times of war, generally they would have many light ships and the Antigonid (Phrygian) navy at our start the commanders of such forces would even be styled an “Archpirate”. When not hired they would act as brigands and raid around the countryside near and round ports.

In times of peace Pirates were generally not hired as the interest countries had in them was as part of their navies. Their raids during such times would often be seen as quite bothersome by local states who would sometimes embark on entire campaigns with troops as well as ships to pacify them. This was famously the case for Pompey the Great, the namesake of this patch, but there are many other examples such as the recently deceased Eumelos, king of the Bosporan kingdom. 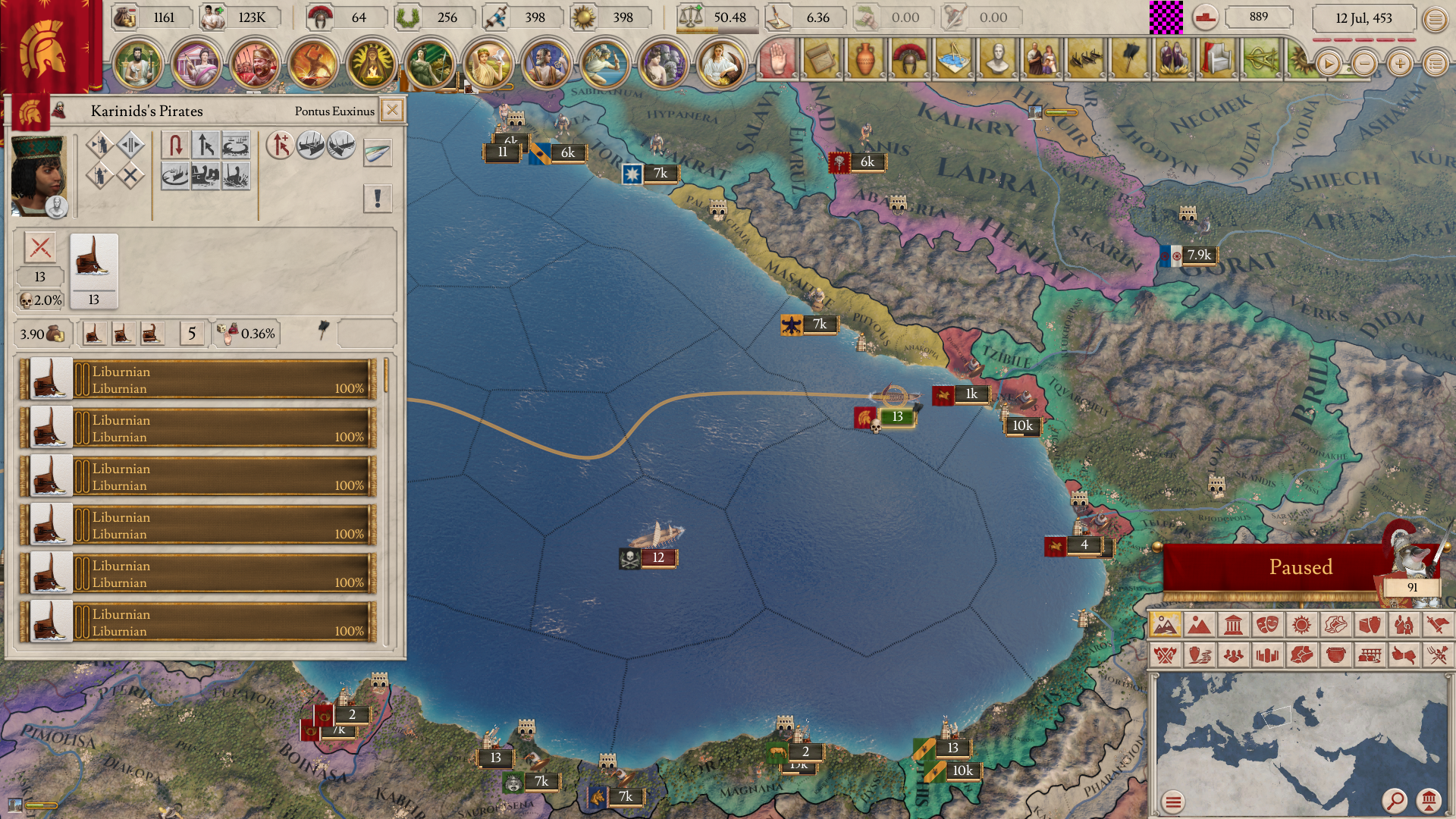 ​
What this means for us is that Pirates will be present around the map at start, much like mercenaries are. They can also be hired, with commander and all by any country within range, to supplement the navy. This may be useful both for when you need to quickly supplement your navy (as ships take some time to build) or if you are playing a country that hasn’t really invested in one yet. Pirates will only ever use Light Ships.


Unlike Mercenaries however the locations where Pirates call home are predetermined. They will exist in Pirate Havens all around the map. These havens provide a small benefit to the owner of the port but they are also the permanent home for a group of Pirates as long as they are not at sea.

If Pirates go unemployed for long enough (this is currently 2 years) they will set out on a raid, leaving their port and turning hostile to other fleets. They will head for a port that is not protected by a fort in another region than their home and raid it, leaving destruction in their path, before returning home and being open to new offers. If a pirate fleet is destroyed it will be recreated at 0 strength in its home port where it will regain strength over time. 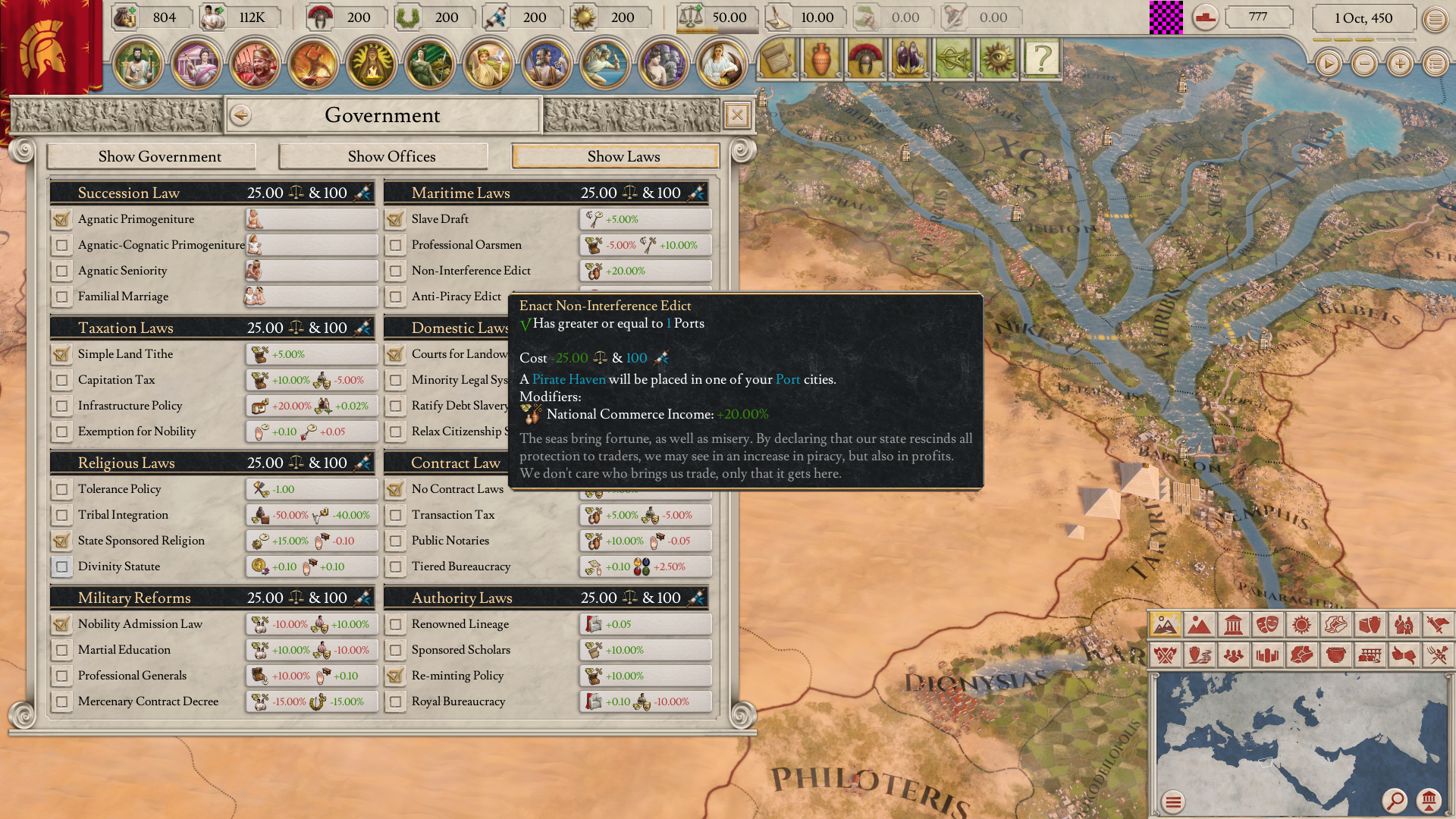 ​
Now not everyone likes Pirates. In times of war a unit in a Pirate Haven will be able to cleanse that city of its Haven and remove the Pirates permanently. Every country will also have access to a law to outlaw piracy, which will give them a Casus Belli on all countries that harbor pirates.

Likewise every country will have access to a law to condone Piracy, which will create a new Pirate Haven in one of your ports. 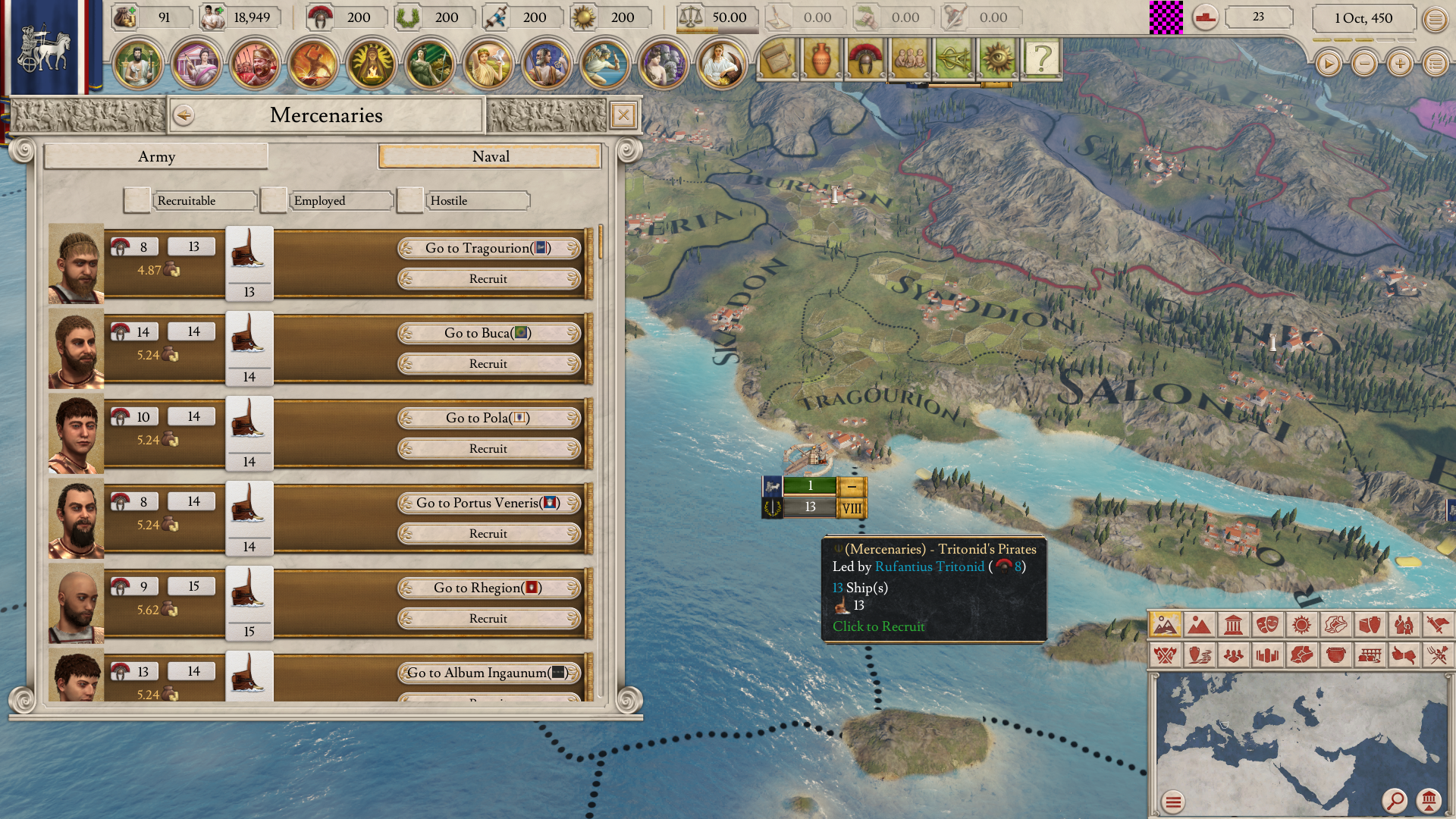 To accommodate these changes the mercenary view has been split into two tabs. One for land units and one for Pirate groups. Pirates, much like mercenaries, can also be hired by clicking on their unit on the map.


The aim of these changes are to make pirates into something you can deal with in more than one way. You can encourage them and strengthen your local economy, and have access to extra ships in times of need, or you can actively go after them and eradicate them from the seas completely.

​
Apart from pirates another certainty at sea is recurring harsh weather. Storms have ravaged the Mediterrenean, the Baltic, the Indian Ocean and the Atlantic longer than anyone has dared to sail them. WIth the Pompey patch recurring storms can strike at sea (exactly during which part of the year varies depending on the sea in question but they are generally more common in the open sea than near land) and will impose a harsh attrition penalty on the affected sea zones for 2 months, before ebbing away. Storms will be clearly visible as animated rain, wind, clouds and lightning will cover the affected areas during this period. 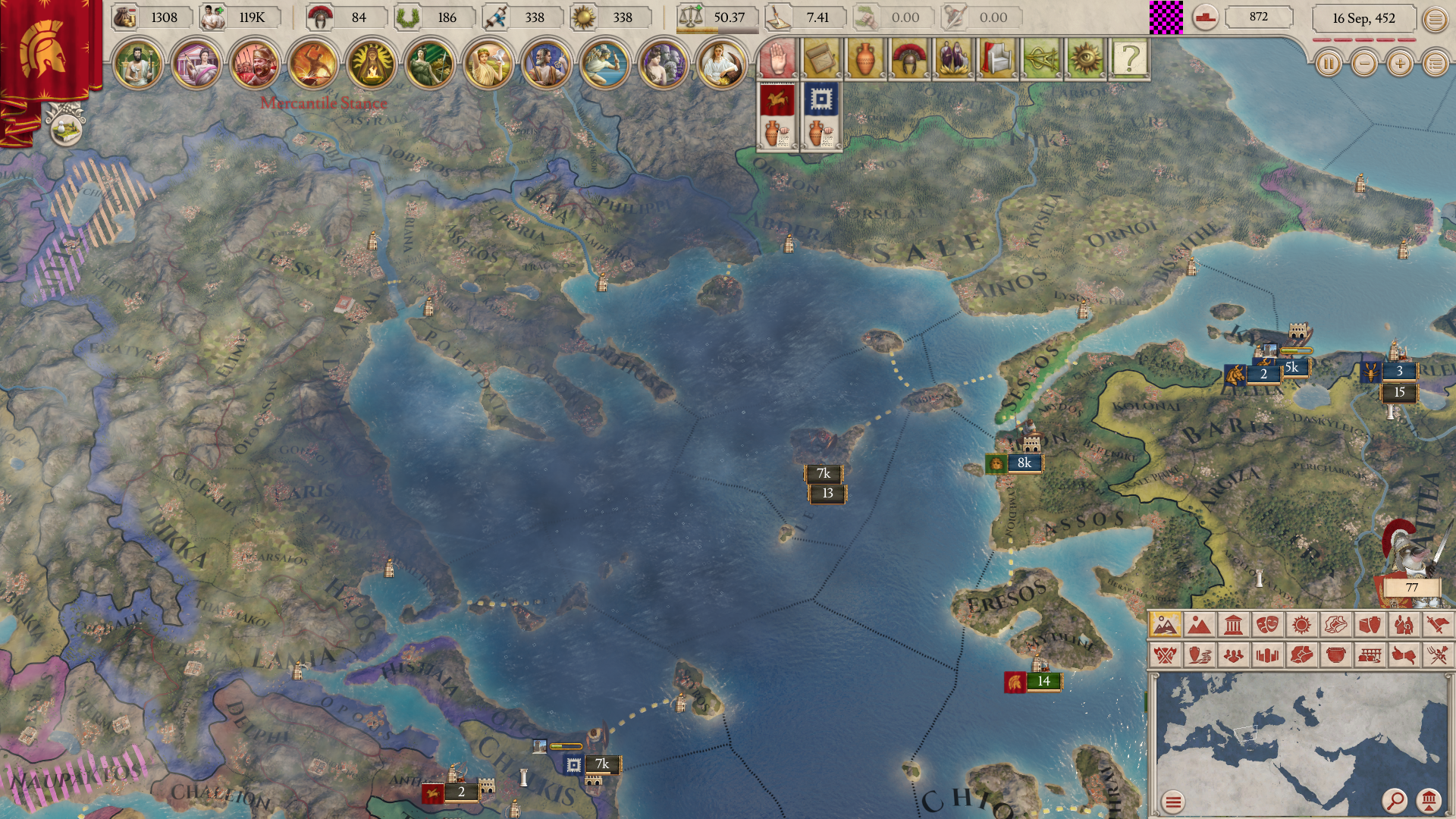 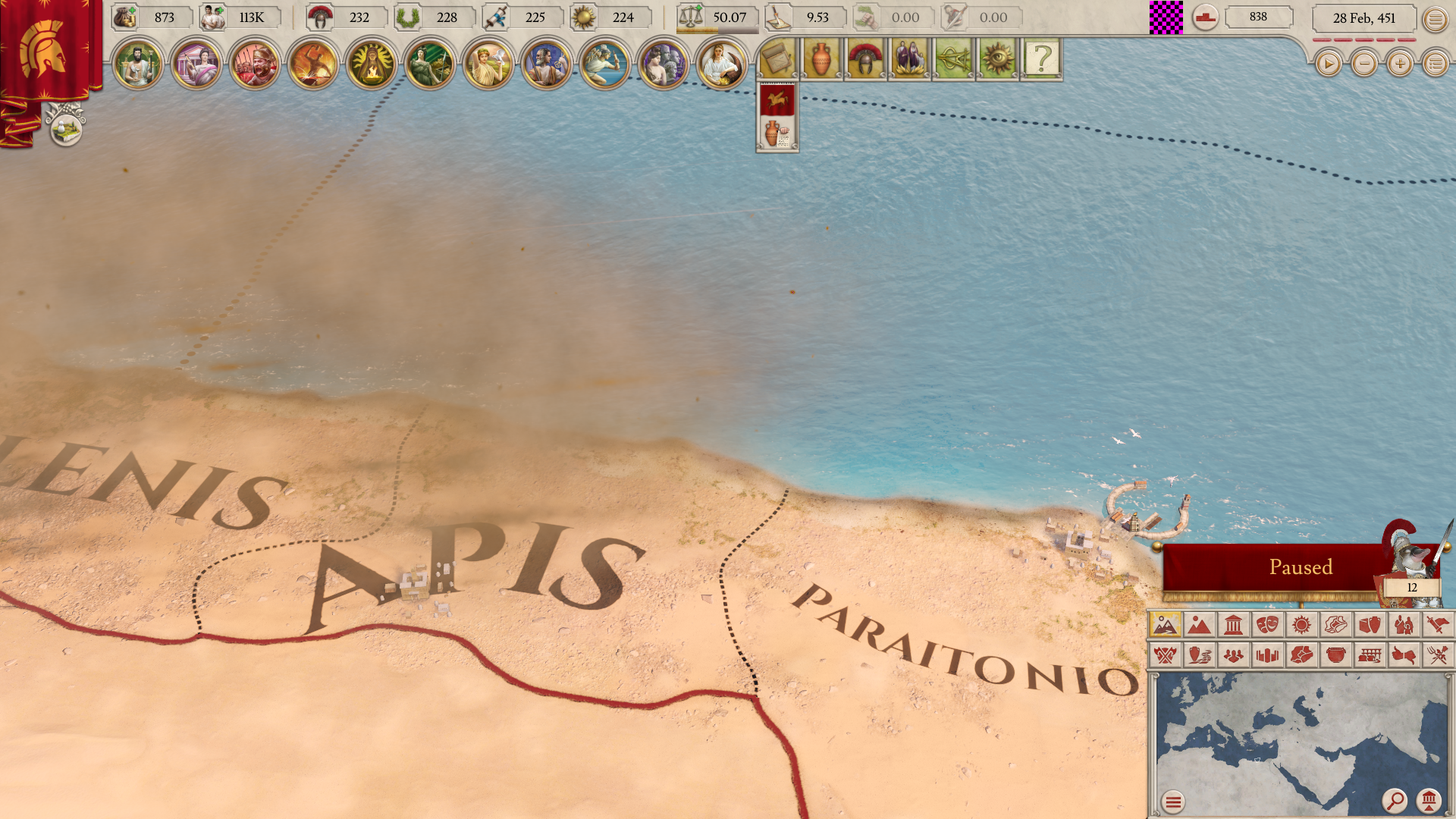 The harsh effects of weather is not really unique to the sea. In the Pompey patch Desert areas will also run a risk of storms, manifesting themselves in great sandstorms visible in the desert cities themselves, potentially turning an already inhospitable route into a much more taxing affair. 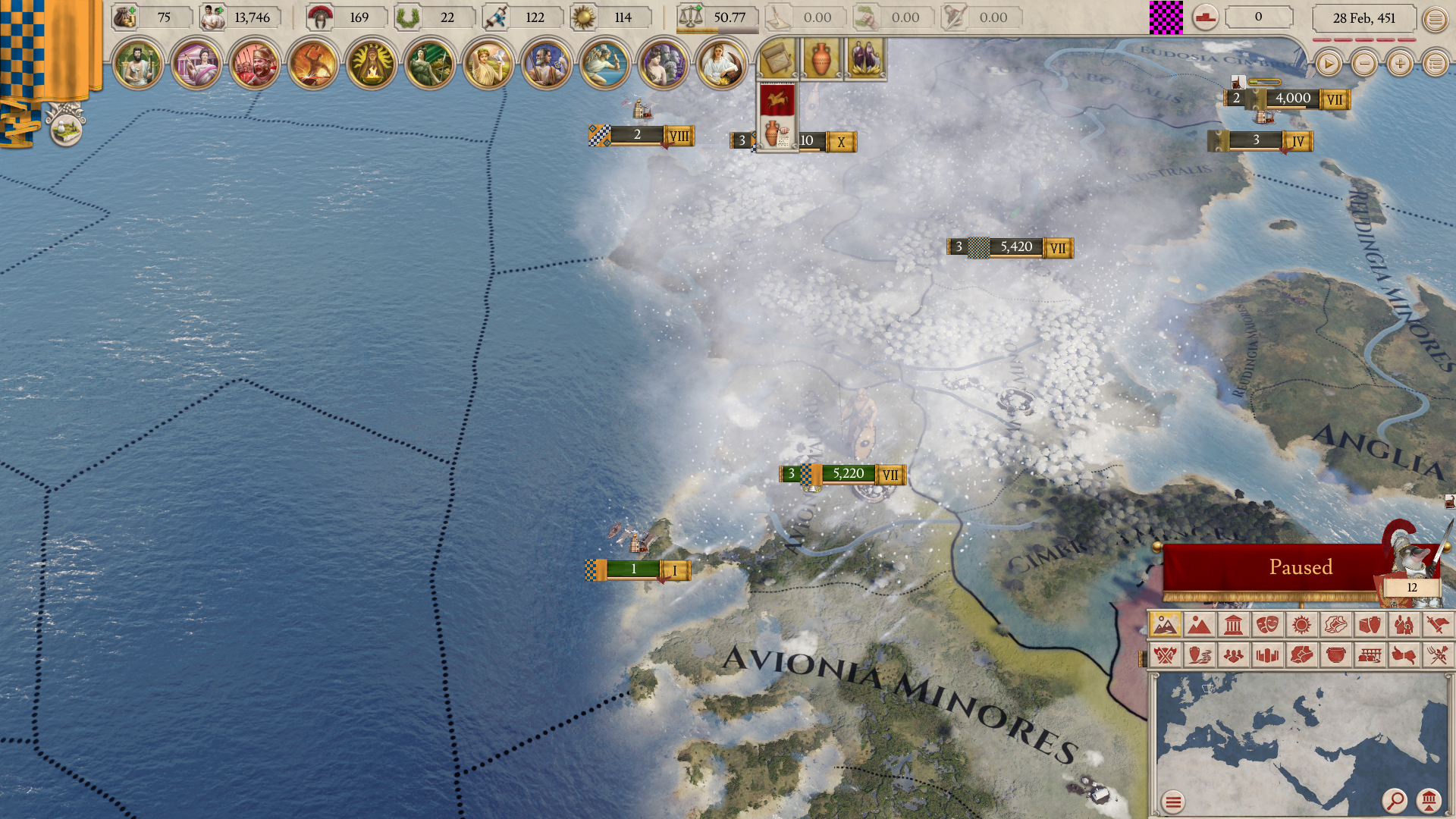 In the parts of the map where snowfall exists the winter may now also bring snow storms, sometimes quite great in size, causing attrition to all units in an area. As with the other two storms Winter storms will be shown clearly on the map and will remain in place for 2 months. 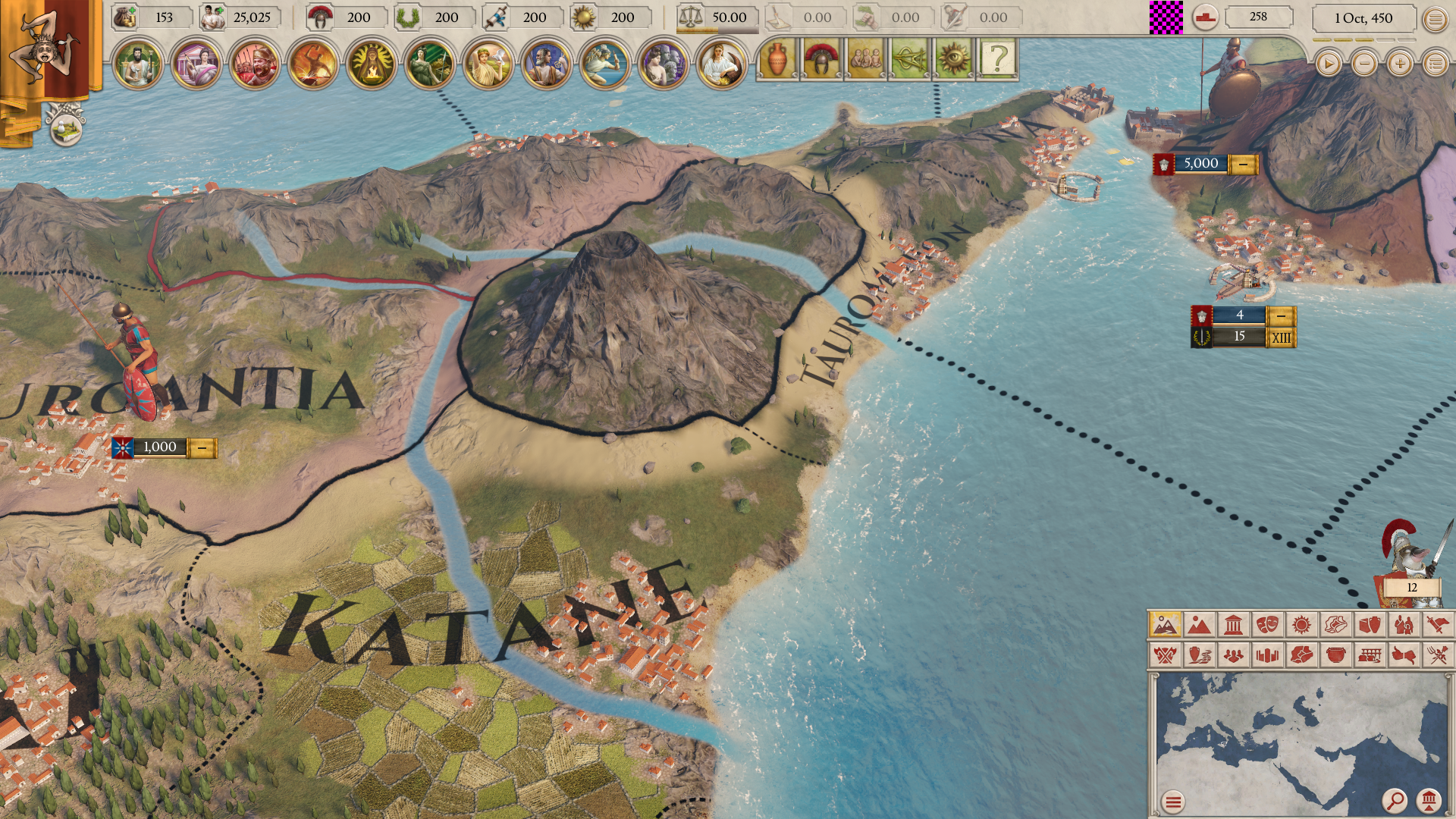 Volcanoes hold a very significant place in Roman history, as the eruption of Vesuvius has given us both a detailed snapshot of what a Roman city looked like just 100 years after our game ends, and the name for a Plinian eruption themselves after the man who left a description of it to the world. In the region covered by our game a large number of Volcanoes were active at the time, and many of them remain active to this day. Just outside the era we cover Volcanic eruptions greatly influenced the course of history, with Mount Aetna even stopping a Carthaginian invasion 100 years prior.

In Pompey patch we will build on and expand the existing Volcanic eruption events, which could occur and ravage the area around a volcano until a nearby power spent the resources to put the area back to use, after which it will benefit from the addition of volcanic soils.

We have now added a large number of new volcanoes, all visible on the map, and searchable in the province finder.

When an eruption occurs you will be prompted by an event, and the volcano in question will visibly spew forth fire and lava over the land around it. In a normal play-through there will be 1 - 2 eruptions. 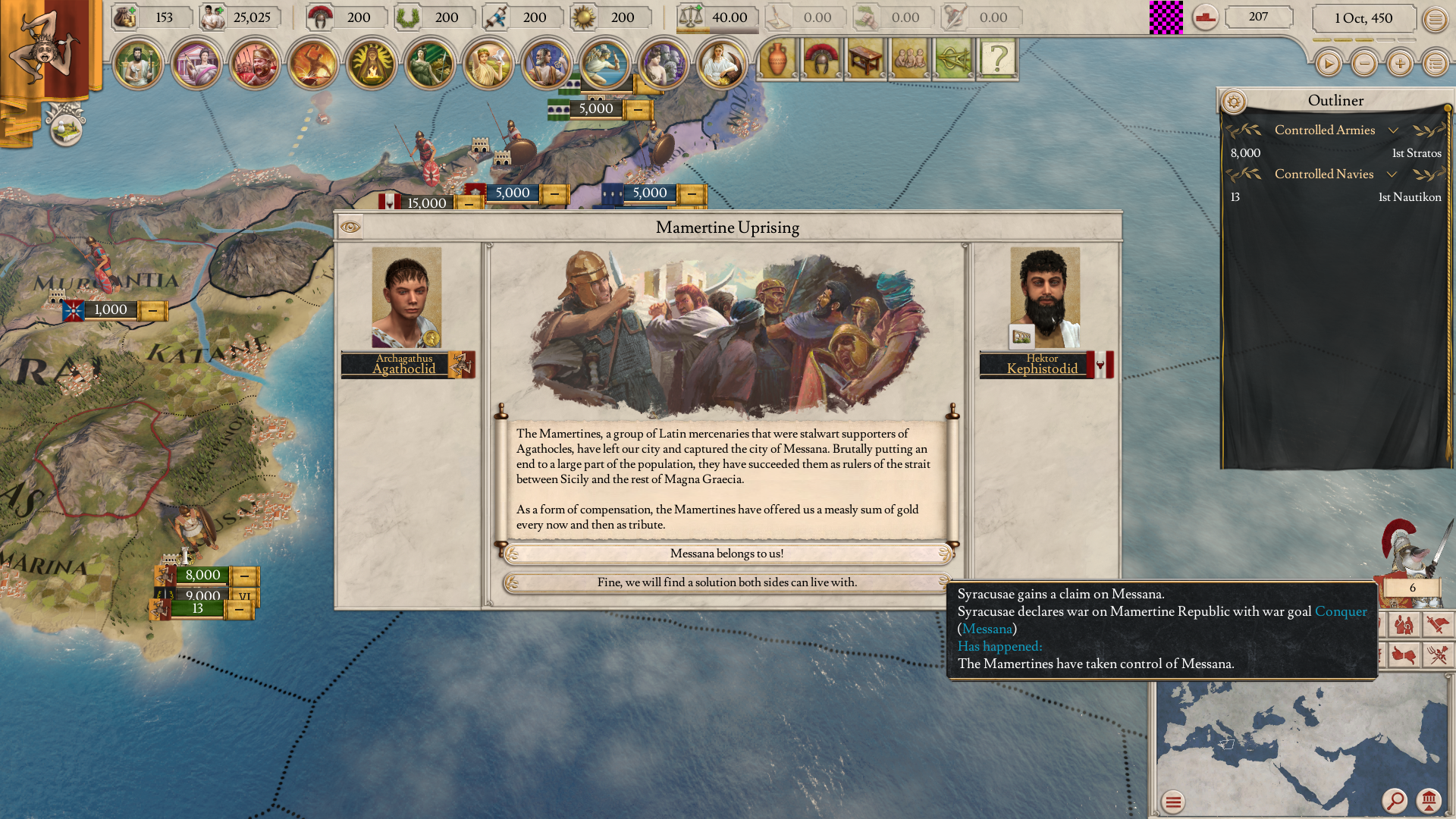 As is often the case in our patches Pompey will come with a number of new events. In this case the focus has been on additional flavor events for Rome, Carthage and the various states if Italy as well as on events focusing on the relationship between the state and Slavery.

Lastly a number of new events have been added to expand on the relationship between the first and second consul (or, in monarchies the ruler and their consort). 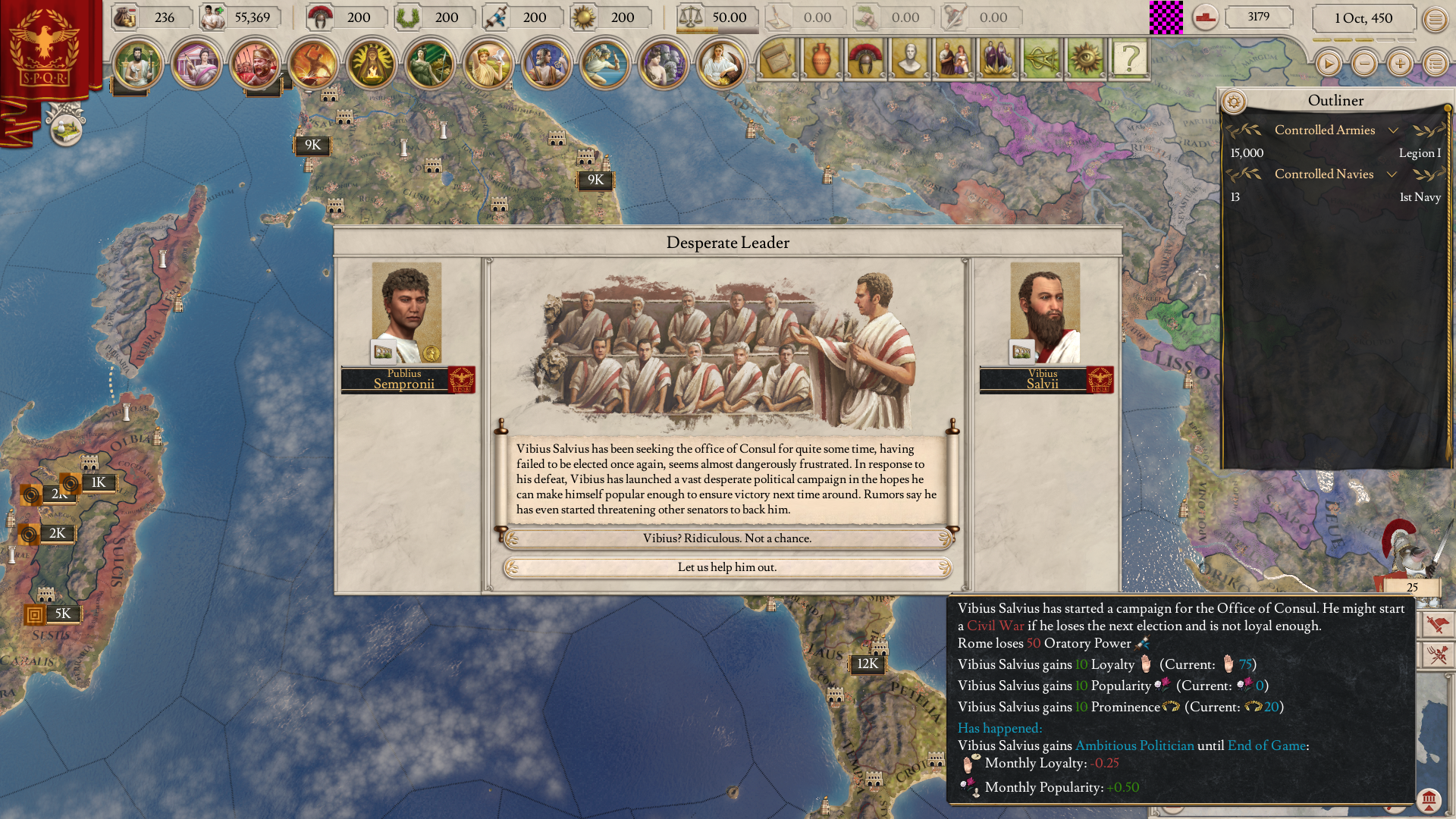 That was all for today on changes that are coming to you soon with the Pompey patch.

Bump for forum bug that made it hidden.
Toggle signature
No fighting in here! This is the war room!

Froggie said:
Not to seem negative but all I see here is more ways to negatively affect the gameplay experience by; Adding random atmoshperical events increasing (the already harsh) attrition in IR and making Pirates another annoying immortal force (when Barbarians already exist as a constant ticking time bomb that cannot be eradicated).
Click to expand...

If you want to be free of the pirates all you need to do is send a force to go and root out their homes. If you don't all they do now is that every 2 years (at most) they will leave a bad modifier on one of your ports.
As opposed to previously pirates stuck around outside of your ports forever and came from nowhere.

As for the storms, they will at most affect you for two attrition ticks and, since forts now block minimum attrition modifiers a friendly fort will protect you completely from them. The impact is not negligible but it is also not the end of the world. The world will not be constantly plagued by storms or eruptions.
Toggle signature
No fighting in here! This is the war room!

Darth. said:
What if your ships are docked at the same port as the pirates and your war enemy hires them? Will there be a battle? @Trin Tragula
Click to expand...

Like a mercenary force a hired pirate fleet will start out exiled and needs to be brought home before they can be used. So, no, the pirates will not engage anyone in port
Toggle signature
No fighting in here! This is the war room!

KittyYuln said:
This looks really cool! Will for volcanic eruptions: 1-2 eruptions in the playthrough in total or 1-2 per volcano?
Click to expand...

1-2 per playthrough.
Toggle signature
No fighting in here! This is the war room!

nikkythegreat said:
If some one would apply non-interference edict then change the law would the pirate haven disappear?
Click to expand...

Taking the anti-piracy laws not only gives you a CB against all bordering countries harboring, it also lets your own armies root out pirates with havens in your country.
Toggle signature
No fighting in here! This is the war room!

Oglesby said:
Can't raid their own home region so therefore not their own port. I am not seeing anything that would prevent other pirates from raiding it.
Click to expand...

Correct. Harboring one pirate band does not make you immune to other groups.
The region restriction is also less of a protection if you grow big since you will have cities in many regions. Such an empire likely has more to gain from getting rid of them (though being able to hire them in times of need is always nice).

For a small country though it may not be a bad idea. There’s even a pirate national heritage for those countries that start with a pirate haven in their capital.
Toggle signature
No fighting in here! This is the war room!
Show hidden low quality content
You must log in or register to reply here.
Share:
Facebook Twitter Reddit Tumblr WhatsApp Share Link
Top Bottom