Hello everyone and welcome to the tenth development diary for Imperator. This time we take a quick look at the country-rank system.

Each country in the game is determined to be of a certain rank, depending on their size, and different ranks give different bonuses and abilities. Please be aware that all values will be tweaked constantly during development.

This is only possible if your country is only 1 city large. A City State can be a part of a defensive league, and have the following bonuses.

This is countries that have less than 10 cities. Local Powers can be part of defensive leagues, and they have the following bonuses.

This is countries that at least 10 cities. They can use the diplomatic abilities Threaten War and Guarantee, and they have the following bonuses.

These are countries with at least 20 provinces, and that are not subjects of other nations. They can use the diplomatic abilities Intervene in War, Enforce Peace, Threaten War and Guarantee, and they have the following bonuses. 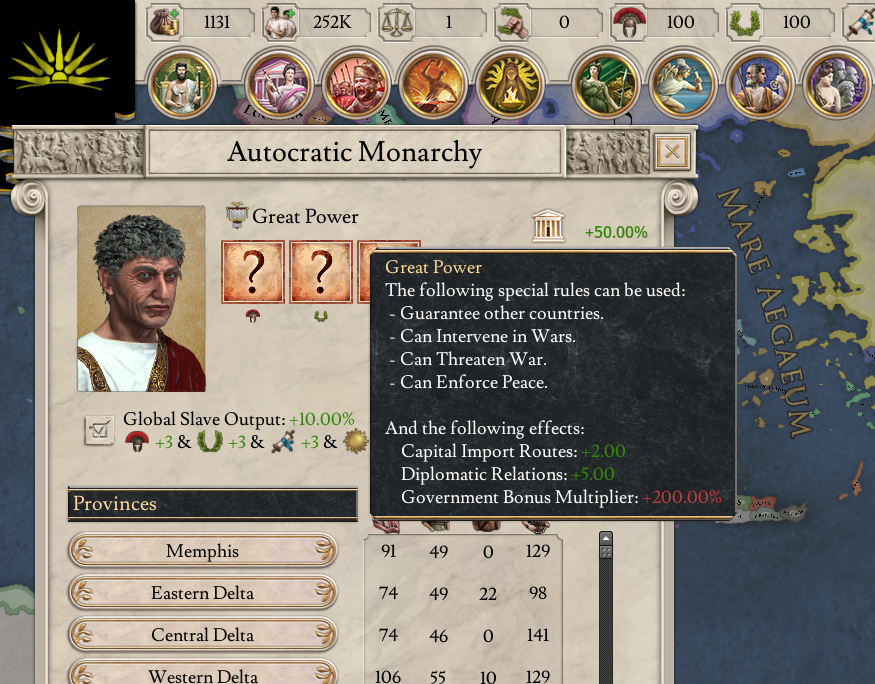 Intervene in War
You can join on any side in a war, where you have good relation with the warleader.


Enforce Peace
You can force a white-peace on a nation in a war, if you have good relations with their enemies.


Guarantee
You can protect any nation of lower rank from being attacked, giving you casus belli on anyone attacking them.


Threaten War
You can use a claim, to demand a nation to secede a city or province to you, to avoid an expensive war.

So guaranteeing someone will gives you a CB, interesting, does that mean that if you declare on them its a separate war? With its own terms of peace? Or do you join on the defending side?

Also nice to wake up and immediately have a shiny new dev diary to read.

Thank Johan.
With "Guarantee" you have a CB and (if used) you start a new war or It "merges" with the existing one?

Johan said:
These are countries with at least 20 provinces
Click to expand...

Just to be sure: did you actually mean "cities" or really "provinces"?

Vollheld said:
Just to be sure: did you actually mean "cities" or really "provinces"?
Click to expand...

Soz for being such a div!

edit:
He he! Ninja'd
Glad it's not just me though!
Expand signature
Lord, grant me the serenity to accept the things I cannot change, the courage to change the things I can, and the wisdom to know the difference.

Quick Question, do you know how many/which countries start as Great Powers in the beginning?

What sort of bonuses does Defensiveness give?

Nice, no complaints from me.

@Johan how moddable is this?

Can existing ranks be modded and new ranks added?

Can diplomatic actions be modded or added?

one week has passed and the remaining time of 6 months hasn't changed! feeling like eric cartman waiting for the new nintendo wii.


by the way, would a 5th rank (like "hegemonic power") too much? it could reflect the great empires of the time. if i am not mistaken --i might be mistaken- since the map is huge there will be lots of "provinces". rome or the iranian empires, or like any other emerged empire could greatly surpass 20 provinces...

Attack is the best Defence

The Major Power bonuses still apply to subject countries as long as they meet the criteria of 10+ cities ?

Looks nice, especially because there is no fixed amount of Great Powers or the Local Powers. I hope that government types will also play a role on the bonuses country rank provides.

There is an early question about colonization and city-states: would city-states be able to establish colonies as separate subjects but in one league for example, making a "sphere of influence" of their own made up from the subjects they made.
Expand signature
We, the People, need Victoria 3.

So what you're saying is that we get 100% EU4 diplomatic system with its mechanics. Nothing new?
Expand signature
The cake is a lie.

Intervene in a war and enforce peace shouldn't require good relations. Sympathies have little to do with politics and this requirement is nothing more than an unrealistic, frustrating limitation.

Same goes to diplomatic limits. It's arbitrary number which break immersion. States should make alliances based on international situation and that's it.

Andrzej2 said:
Same goes to diplomatic limits. It's arbitrary number which break immersion. States should make alliances based on international situation and that's it.
Click to expand...