Today we’ll be talking about the vision for this game. We have often talked about how close we are with the community, but this is the first game we have made where a post from a forum-member is quoted at the top of our Game Design.

The balance between CK2 and EU4/Vic2 should remain in Rome2. Rome was a fantastic mix between CK1(characters), EU3 (diplomacy, and war) and Vic1(parties, provinces system and population dynamic) and its own feature like barbaric migration and the best civil wars in Paradox games - @Leon_Aditzu https://forum.paradoxplaza.com/foru...e-2-if-it-happens.769694/page-5#post-19193193

This was such a great post describing Rome, so that when we started with Imperator, it was a natural to use.


In this game we’ve wanted to stay true to this vision, while implementing the knowledge we’ve learned in the last decade of making games with better UX and player agency, while increasing the depth and complexity enormously.

There were a few main things with the original that was really bad though, and that we have decided to remove or change.

All in all, whenever possible we’ve strived to be adding more depth and complexity to the game, to make this into the ultimate GSG.

Here's a quick look of Iberia! 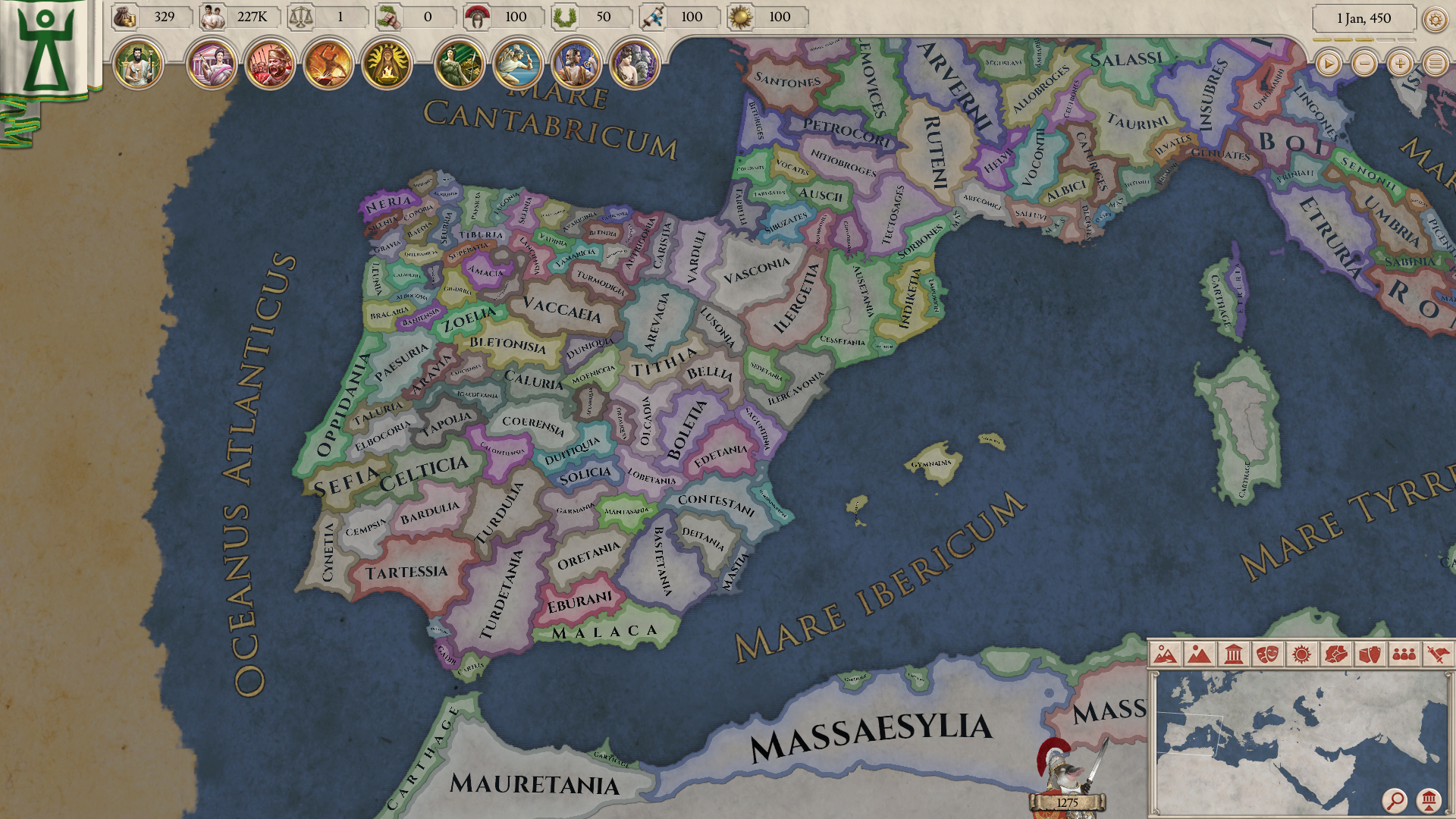 I love the little legionary on the bottom!
There will be any "empty space" (eventually in the eastern Europe region), or all the map will have a state/tribe who owns a territory ?

Will wastelands like the Pyrenees, Alps and Carpathian ranges be on the map to emphasize the importance of controlling passes? Can't wait to see them in zoomed-in glory if they are.

I'm curious too how large rivers will be portrayed in the game? Only cross-able if massive bridges are built / @ fords?

1275 bugs? I am glad that they aren't so many in this stage.
Toggle signature
Nova Monumenta Iaponiae Historica (New Historical Monuments of Japan) A Japan Mod for CK2 (beta 0.8)
The Most Supported Historical Total Overhaul Mod on CK2/Steam Workshop!
Historical Genpei War Scenarios plus 1493-1582 Scenarios, Christianity, Arquebuses, and other Historical Events, Original 2D Portraits, Very Detailed Family Trees of the Emperors and Many Samurai Clans, and More! You can check very alpha version (not the latest one) video in ParadoxExtra!
Direct Link to our Steam Workshop page.

Glad to hear about the omens and trade being reworked to be more engaging.

Looking forward to know more about the politics, technological development and colonization.

Maybe it's too early but will be position of armies important? So you have to think how many legions should be in each province. In EU4 this is not that very important.

So if you left some parts under defended, you will pay dearly.
Toggle signature
https://forum.paradoxplaza.com/forum/index.php?threads/division-commanders.1368762/

There are a lot of more states/provinces in the northwest compared to the south of Iberia, why is this? I at least can't remember the difference to be as significant in other games. Are these just smaller states/countries with less cities/provinces? Sorry my Imperator terminology is probaby not up to date.

Very cool that you actually use a post from a forum member in your game design!

Is this diary actually meant to troll Iberia lovers from EU IV or to tease them?
Toggle signature
https://forum.paradoxplaza.com/forum/index.php?threads/streltsy-disasters.1104950/ - my suggestion of unique disaster for Russia and nations with primary culture of East Slavic culture group

https://forum.paradoxplaza.com/foru...sison-of-threatening-of-war-mechanic.1068550/ - my suggestion to improve of diplomacy actions from The Cossacks DLC
J

Johan said:
All in all, whenever possible we’ve strived to be adding more depth and complexity to the game, to make this into the ultimate GSG.
Click to expand...

I have full confidence in you Johan! Thanks for showing us development before release so the community can give feedback.

Would be supper cool to get a snap shot of the culture map for Iberia!
Toggle signature
There blindly kings fierce wars maintain,
For palms of land, when here I hold
As mine, whose power no laws restrain,
Whate'er the seas infold.
Nor is there shore around whate'er,
Or banner proud, but of my might
Is taught the valorous proofs to bear,
And made to feel my right.

Thats a lot of provinces...