Jump to latest Follow Reply
Menu
Install the app
You are using an out of date browser. It may not display this or other websites correctly.
You should upgrade or use an alternative browser.
Imperator: Rome 8918 Bug Reports 3652 Suggestions 2389 User Mods 651 Tech Support 505 Multiplayer 56 After Action Report (AAR)
Showing developer posts only. Show all posts in this thread.
Show all posts

Today we’ll be taking a look at some of the more significant balance changes coming to the game with the advent of the 2.0 release.

Due to the levies and legions features being added, manpower is undergoing a few adjustments. Simply put, manpower from pops is being increased, whereas the expected number of years for manpower to reach the maximum cap is being reduced.

This effectively means that your monthly manpower gains will go up, whereas your manpower pool will remain broadly similar to before.

Well, with levied units being proportional to your population, we found that fielded forces tend to be larger than if one builds armies 1 unit at a time. Combined with the fact that levied pops do not contribute to resource income, this usually results in significant waiting periods in between conquest - something that could often feel like a hard block. Of course, these changes don’t offset the need for good pop planning, they merely mitigate some of the increased potential for attrition and casualty damage.

As of 2.0, statesmanship will be vastly more important than prominence in republican elections; simulating more of a meritocratic/political aspect to character importance. It should become more likely to have long-serving officials elected to Consul, than those with inherent prominence from one of many sources.

The per-pop cost to integrate subjects has been reduced significantly, as often pop growth would end up outstripping integration speed for larger subjects. Additionally, the AI has been altered to more frequently consider integration of smaller subjects without strategic potential.

Several subject types have been added in 2.0, many of which are accessible through the invention trees.

During development of the oratory tree, it became apparent that more diplomatic ‘keystone’ style effects were required. Several have been added, and tie in to protectionism and intervention. 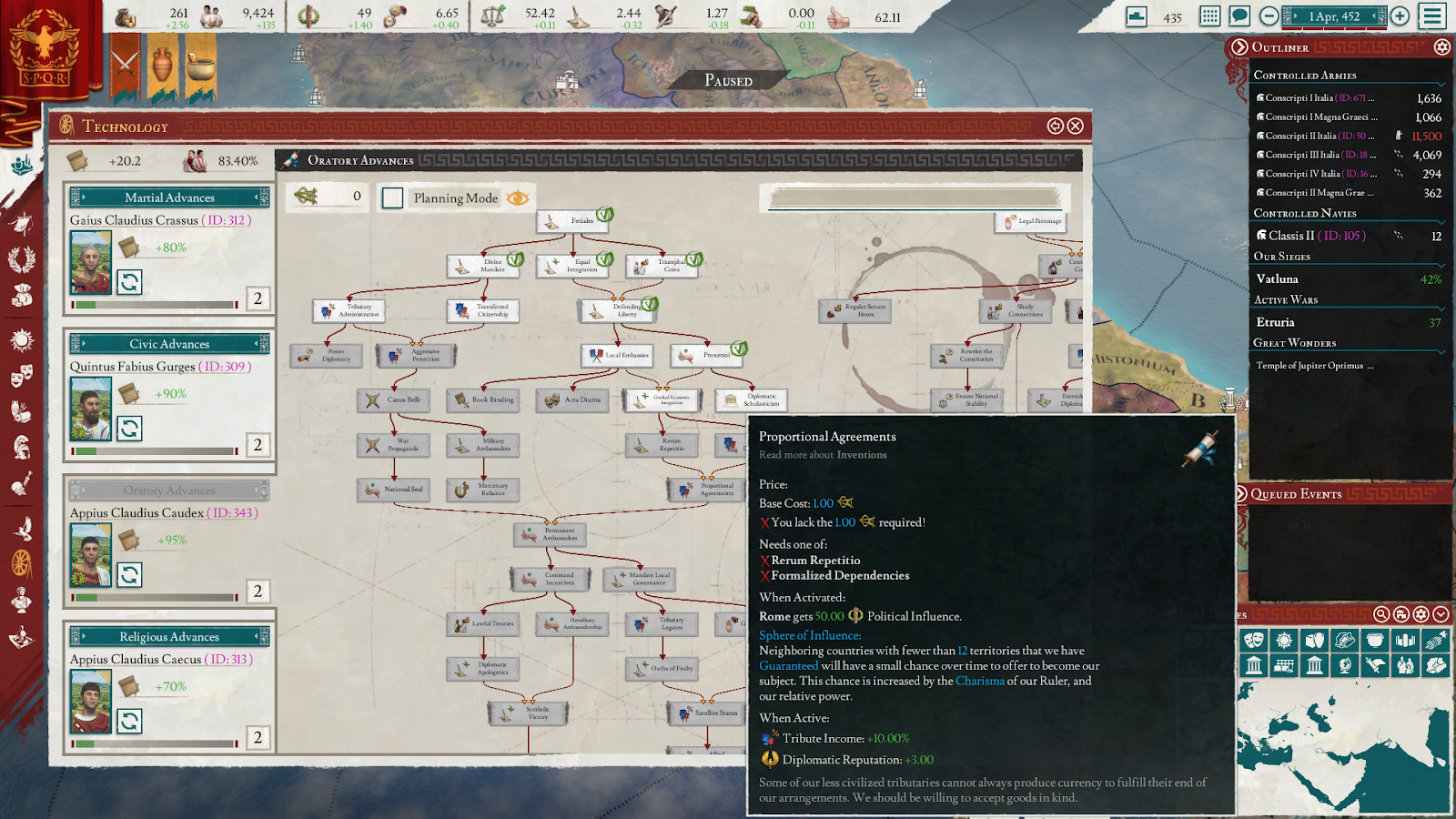 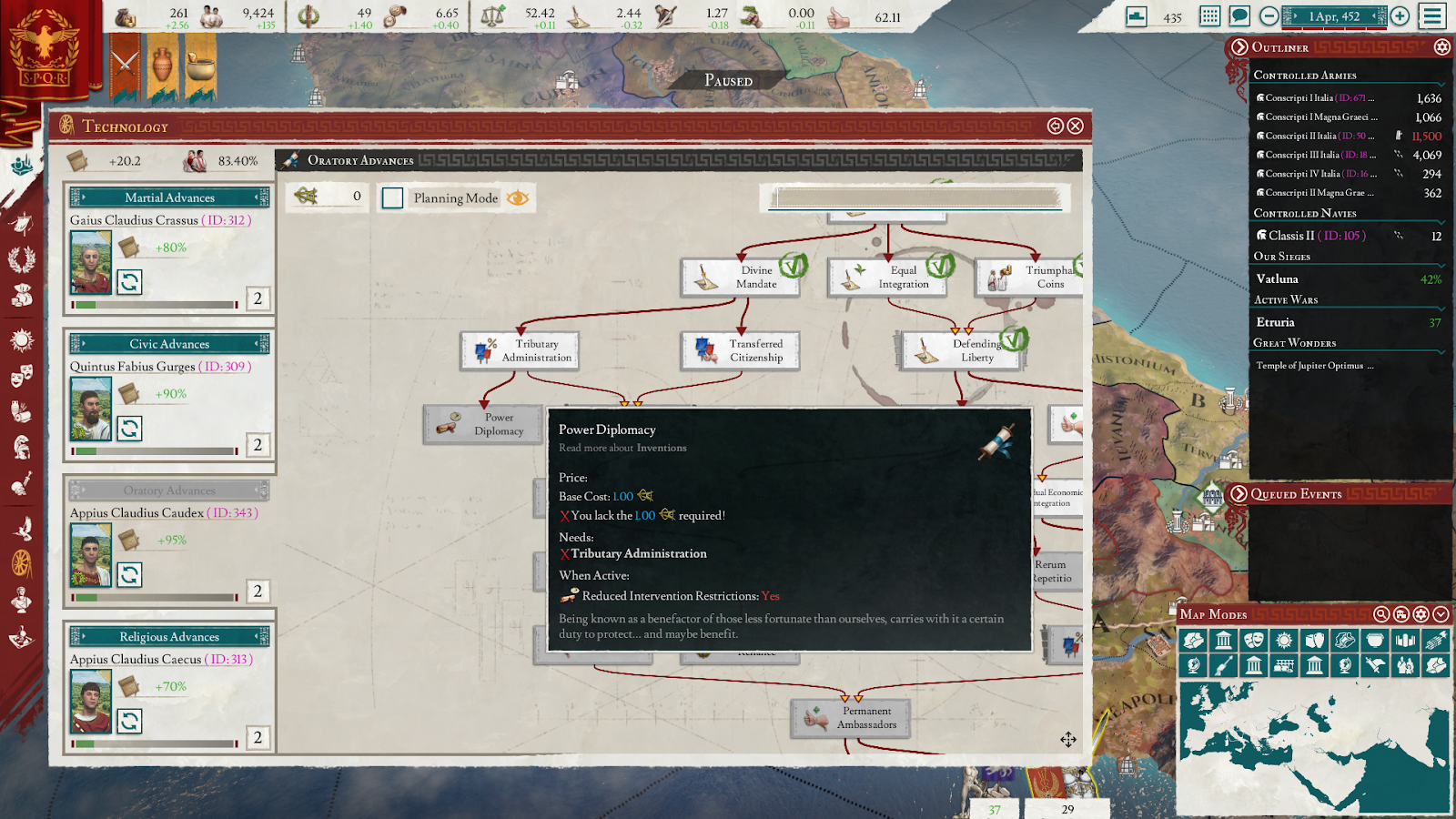 While the sum of the various keystone inventions can certainly seem very powerful, the limiting factor will still be how one spends the limited number of innovations one receives over the course of a campaign. Situational choice remains relevant, and allows for tailoring national capabilities according to desired playstyle.

While the invention trees still contain numerous modifier changes, we’ve tried to add plenty of decisions or unlockables that affect how you play the game, as well.

The size of mercenary stacks now has a greater scaling based on where they are situated. This ensures that they maintain long-term viability, and allows you to better ‘grow’ mercenary bands for your own nefarious purposes.

This functionality previously existed, but was heavily reduced due to the propensity for ludicrous mercenary stacks. A more reasonable scaling has been applied.

Due to popular demand, you will now be able to remove treasures from holy sites not in your pantheon, without razing said site to the ground. 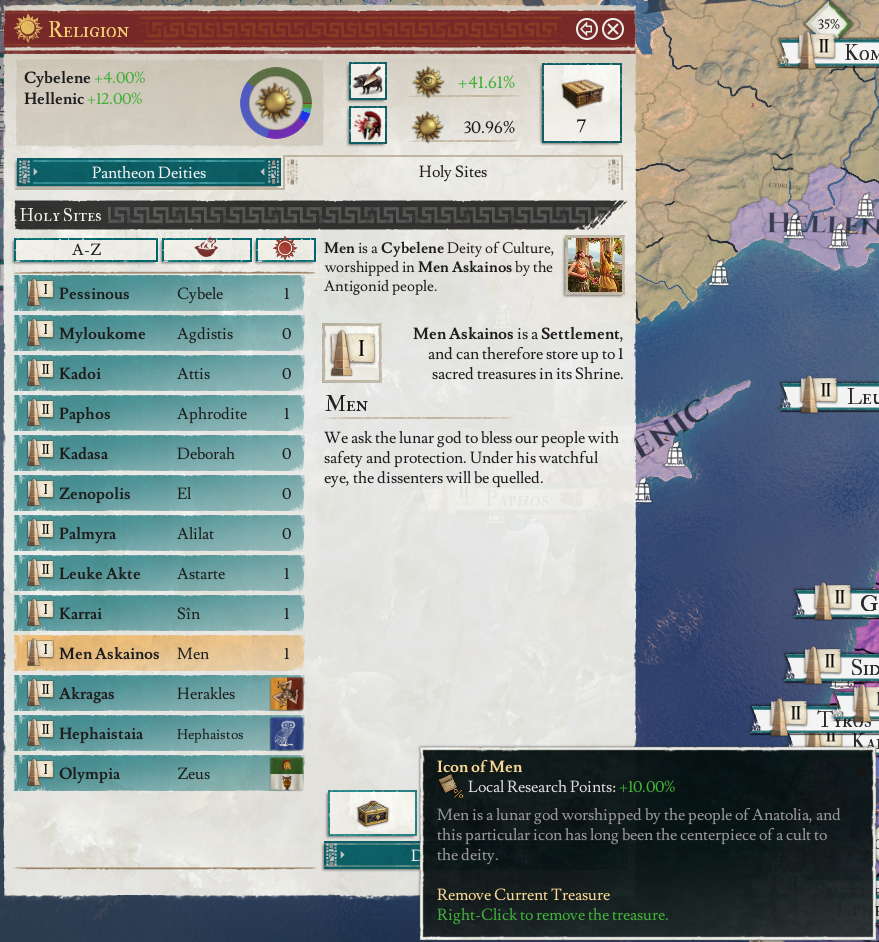 Additionally, holy sites have been given more prominence in the territory UI, where the holysite image will now replace the city status image, and will also show any treasures currently in the territory: 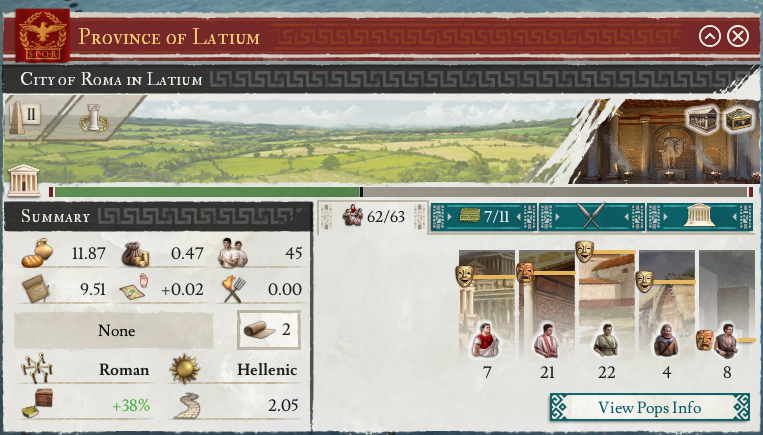 Treasures are a gameplay feature that were previously very difficult to interact with, as many of you have pointed out. These changes ought to mitigate some of those concerns.

Whilst very difficult to balance optimal play and historical accuracy for the AI, we’ve changed the way that the AI evaluates potential wars. This puts a greater emphasis on going after claimed land, a vastly reduced likelihood of expanding into tribal territory (for non-tribal governments), and a greater likelihood of engaging in more evenly-matched warfare between regional powers.

In practice, this results in better expansion for our classic ‘great powers’ such as Rome and the Diadochi, and fewer snaking conquests into low-value tribal terrain. Of course, Imperator remains a sandbox - games will not play out the same way twice, and where sometimes Rome may fall, other great powers may rise to take their place… 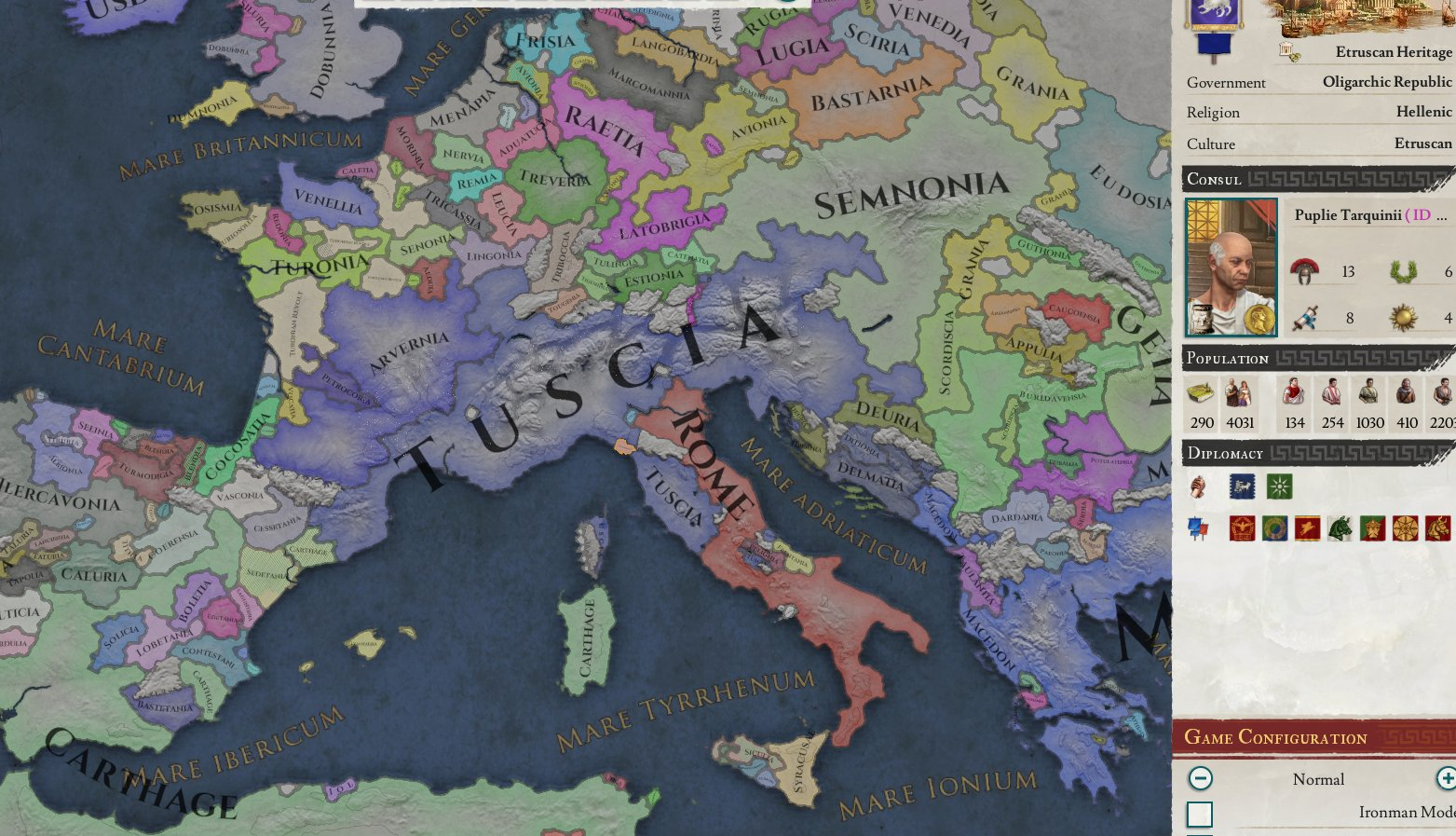 Yes, that is Rome as a client kingdom.

And now I shall hand over to @Chopmist who’ll take you through the final, essential mission for any successful Diadoch.
Toggle signature
You can find my inane, personal ramblings on Twitter
Reactions:

Ave again, this time we’ll be taking a look at the last mission coming with our expansion Heirs of Alexander, a shared Diadochi mission designed by @Trin Tragula which is available to all five Successors when they complete two specific missions from their unique set (e.g. Egypt must complete Eastern Border and Thalassocracy).

Named Diadochi Empire, this mission provides a late-game challenge and thus expects you to already be a large nation, and directs you in establishing a new kind of realm that will fulfill Alexander’s dream of a lasting empire. It also sets out to draw up what might have been if a historical, lasting, united Hellenistic Empire were to dominate the Mediterrenean instead of Rome. The end goal of the mission, apart from lasting government institutions and a strong dynasty, is a uniting common identity beyond cultural and tribal differences - an alternative to Roman citizenship in real history.

As a result of its end game nature, the tasks of the mission have steep requirements, sometimes providing a place to sink your wealth, but offering unique and powerful rewards.
The resolution of its tasks will also sometimes allow you to decide between alternative ways to shape your universal empire.

The right hand path will first set you up with claims on Alexander’s entire empire in case they have been lost via the Epigoni event, and then ask you to conquer any core regions of Alexander’s empire which remain independent (Macedon, Mesopotamia, and/or Egypt, depending on which lands you already own) and give you a choice on how to govern them, with direct rule over such a large empire being quite taxing.

Conquering all of Persia and reclaiming the lands west of the Indus are optional objectives later on this side of the tree which will guide you in fulfilling the requirements of the Reunite Alexander’s Empire decision, which as before changes your country’s name and color - although if your ruler does not have the Blood of the Argeads trait it will be named the Macedonian Empire rather than Argead Empire. 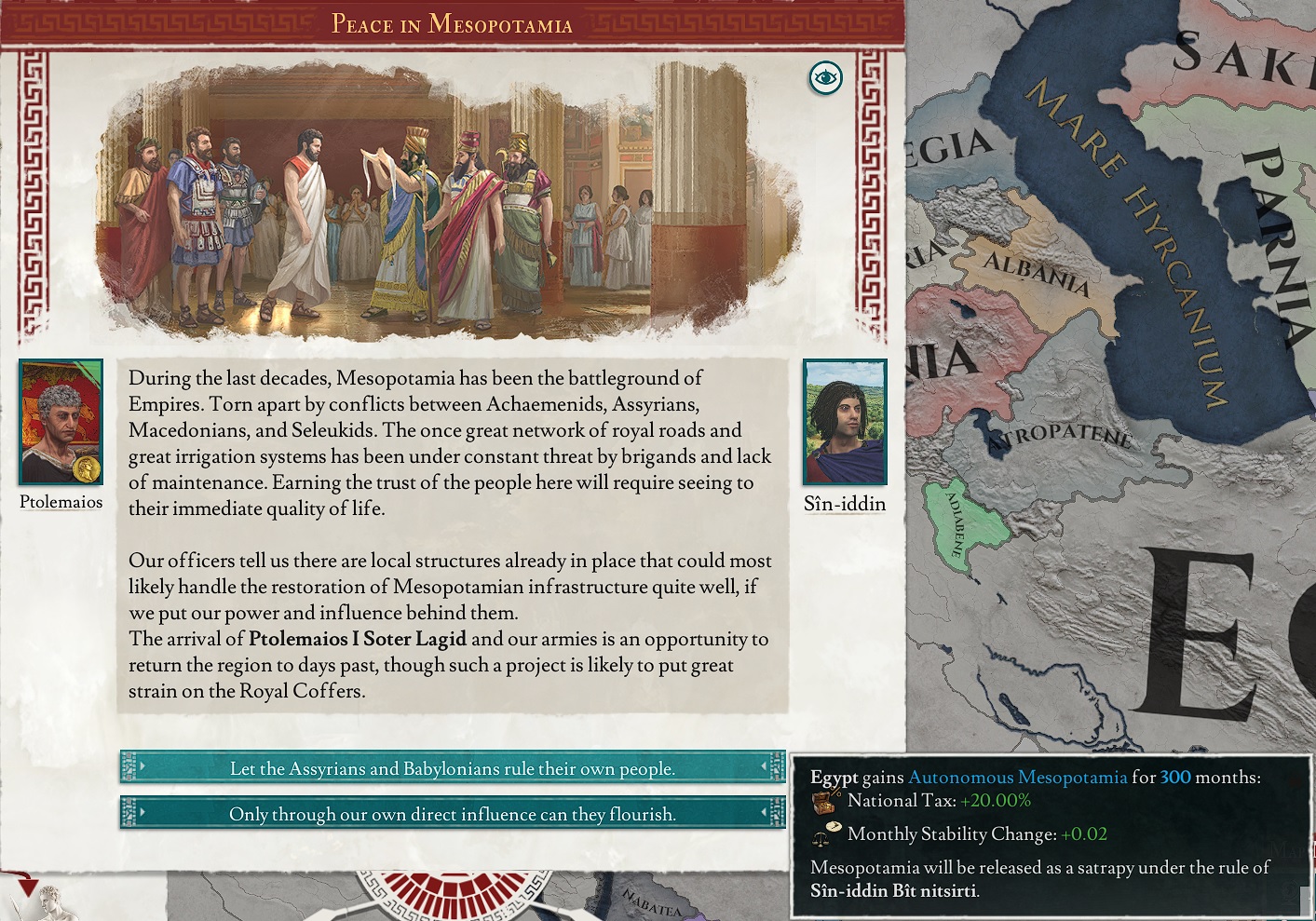 To live up to the empire of old you must ensure your capital has a Great Work (decision-built and starting wonders such as the Pyramids, Pharos, etc. count), ensuring it is a lasting Metropolis.

For this vast empire to function the food supply must also be organized properly; inspired by the Roman bread doles, it will be quite the undertaking to ensure the poor are fed and order is maintained, and your choices in handling this matter will have lasting consequences. 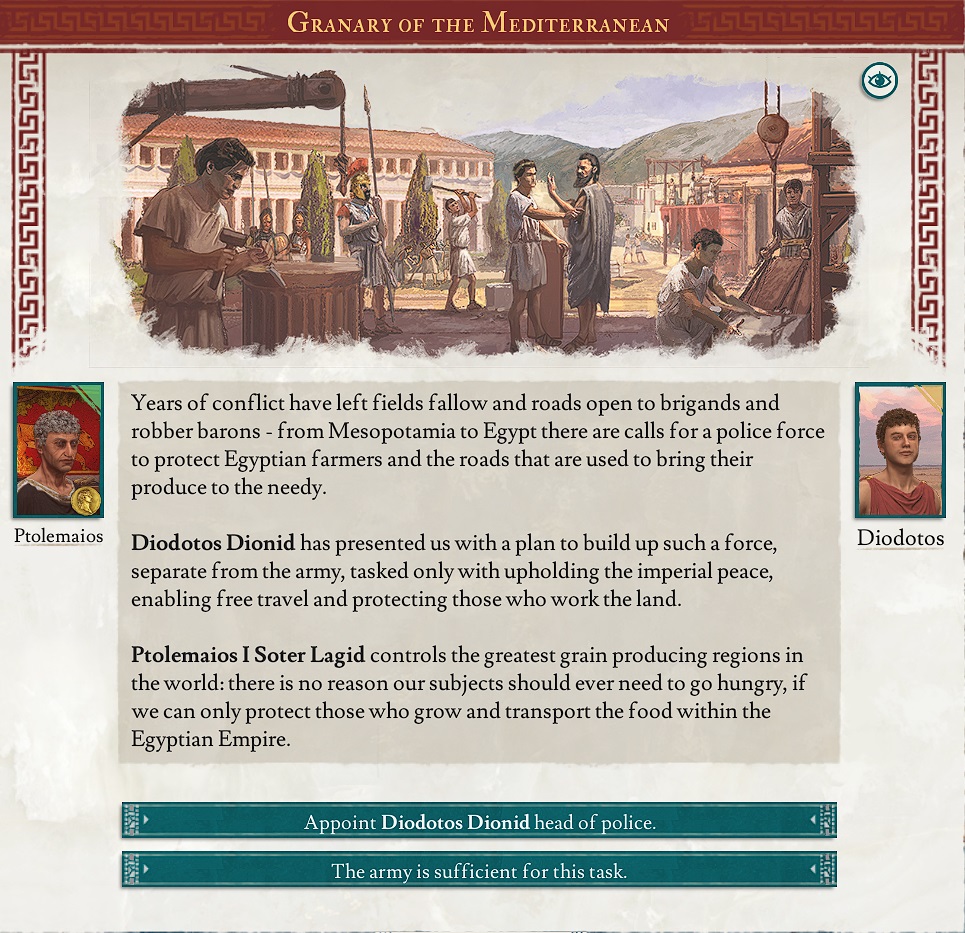 Parallel to this, the left-hand path demands that you have the Empire government form if you are to manage such a large realm effectively, before inviting you to patronize the gods and asking you to assemble the Anthologia Philosophike - nine unique scholarly treasures scattered across the world which will be combined into one - to prove your dominant position as a center of learning and ensure the survival of the world’s knowledge for posterity.

Further, you will be tasked to establish a bureaucracy to oversee the empire’s administration, and decide on how its candidates will be picked, as well as to patronize philosophers, inviting skilled characters from across the world to the capital. A royal school will also be established, granting all current and future members of the ruling dynasty by blood extra skills in a chosen category to ensure the empire’s leaders are up to the task. 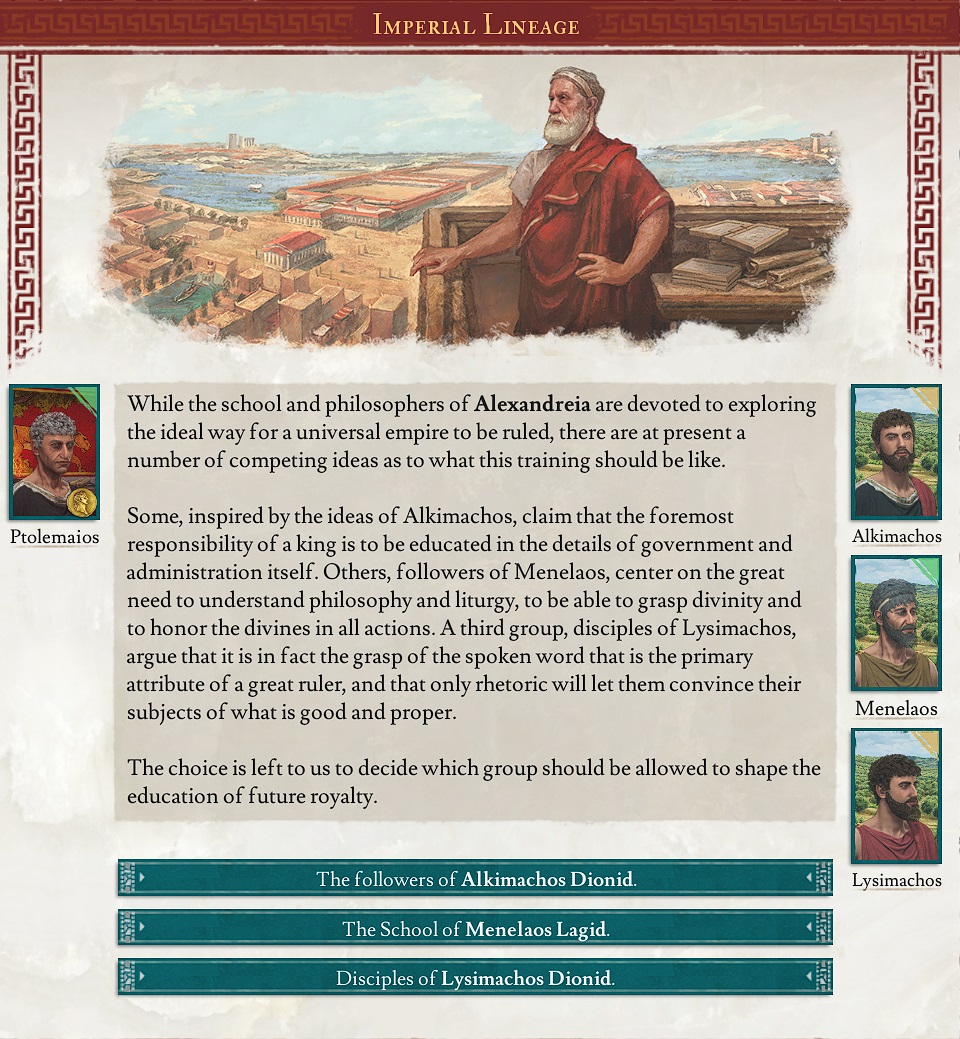 You may then prove you are Alexander’s true successor by honoring his memory and collecting his entire panoply - again scattered around the world - creating another combined treasure for your subjects to be inspired by and gawp at. Deification will also improve your ruler’s skills and legitimacy, the authority of the god-king lubricating the spokes of government.

After all that, you may finally achieve Alexander’s dream of a peaceful world-spanning empire, free from the cultural divisions of the past - something which your close-minded subjects will be loath to accept. The game will challenge you with a vast civil war, where you must destroy those who seek to cling to regional identity and unite the empire.

If you survive that, you will have nothing left to prove to your subjects, or the gods, and Alexander’s ambitions will finally have been realized. A new Hellenistic culture will be adopted by the state and its elite, spreading to the capital and largest cities first, representing the mixing of cultures and the common identity shared by all subjects of the God-Kings of your Hellenistic empire. 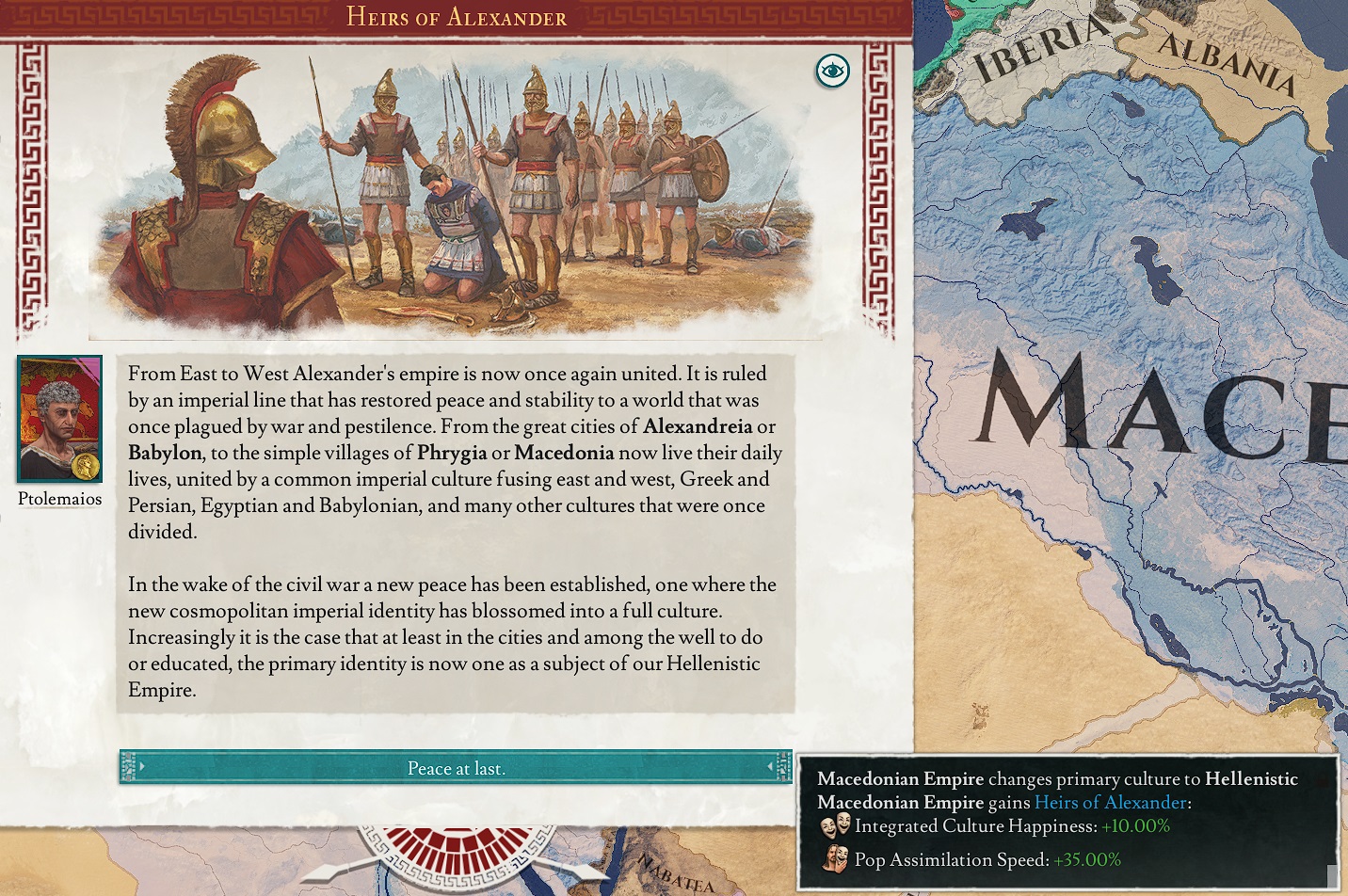 That’s all from me!
Reactions:

Ampalemvi said:
What does that entails to for the Antigonids in case their cause doesn't waver (and therefore if they only have access to the Antigonos Vision mission tree) ?
Click to expand...

Good question, they are an exception, and need either only the first, or the latter two if they did not survive the split.
Reactions:

MohawkWolfo98 said:
Does the Diadochi mission includes Pyrrhus and Epirus, the true successors to the Argead throne?
Click to expand...

vyshan said:
Question: if Pyrrhus rules Epirus and is able to take the throne of Macedon will they be able to do the Hellenistic empire tree?
Click to expand...

The Hellenistic Empire mission will be available for Epirus in addition to the normal routes (forming Macedon and completing the latter two of their trees) if they have completed the Hellenic Contender Epirote mission.
Reactions:

Splorghley said:
Do the decisions / missions that lead to the end-game civil war give some kind of warning / advance notice? I would hate to be happily climbing the mission tree, and be abruptly railroaded into a huge civil war with no notice. Other than that, I'm a big fan of the looming changes, esp the change to the AI war target calculations.
Click to expand...

The reward tooltip for the mission task described in the DD will say that there will be a civil war in big red letters, you will know that once you click it there will be chaos
Toggle signature
No fighting in here! This is the war room!
Reactions:
Show hidden low quality content
You must log in or register to reply here.
Share:
Facebook Twitter Reddit Tumblr WhatsApp Share Link
Top Bottom