Menu
Install the app
You are using an out of date browser. It may not display this or other websites correctly.
You should upgrade or use an alternative browser.
Cities: Skylines 5546 Support & Bug Reports 6801 Suggestions & feedback 2770 Modding & Resources 1769 Official Information & Announcements 127 City Journals and Let's Plays 470 Cities: Skylines Console & Windows 10 Edition 808
Show only dev responses

As promised, we have another special treat for you all in the form of a 2nd Dev Diary which delves into the creation of the 3 new Holiday Songs that were added to the Carols, Candles and Candy DLC - which you can get for free on Steam!

If you missed it:

Dev Diary Part 1
Patch Notes​
So where did it all begin? Right here with you! Some of you might remember back in October where we asked for musical inspiration from our city-builders around the world. In hindsight, October might have been an odd month to ask for festive cheer. But you didn't let us down, and we didn't end up with a Nightmare Before Christmas

Get your Cities: Skylines Holiday spirit on, help us write the Cities Carols of this season! 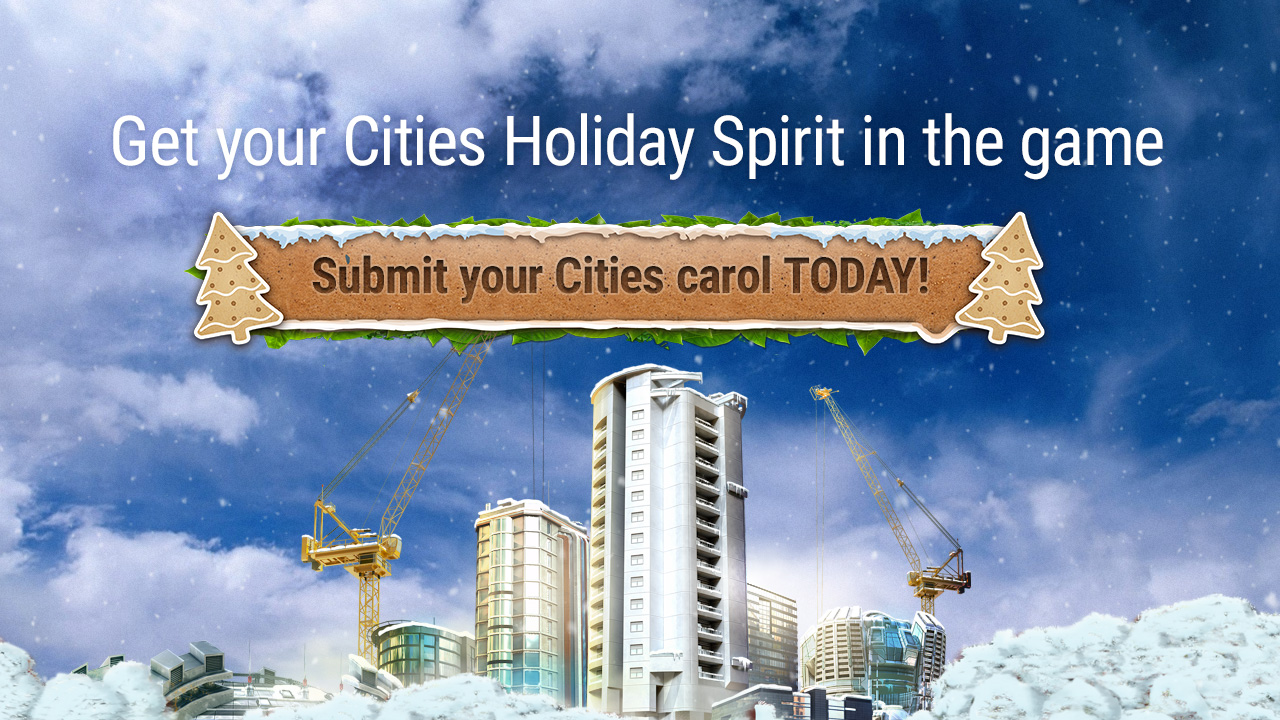 You can see that thread HERE!​
After getting some hilarious Weird Al references and YouTube videos that you really shouldn't watch (of course, now you will go watch them... we warned you!) we started getting some awesome submissions! The jokes certainly didn't end though, and you can tell we have quite a comedic community:

And @co_emmi wasn't about to let the opportunity pass by to join in on the fun!

By the end of the month, we had 2 pages full of beautiful poetry that would make Vogon's proud! These masterful lyrics about truckers, traffic jams, chirper hats and more were finally ready to be taken to the Head of Music at Paradox Interactive: Tobias, whom I interviewed earlier this week to prepare this Dev Diary for you!

Tobias is what you'd call a veteran of Paradox Interactive, having worked with us for 10 years! Back in those days, Fredrick Wester (the CEO at the time) would hit Tobias up to come play the drums But it wasn't until recently in 2017 that he stepped into a full-time position, overseeing around 50-60 producers and composers on various projects, where he works towards one major goal:


"How do we use music to make our games better?"​
I started off by asking Tobias how he approached a project such as Cities: Skylines, to which he explained how Cities: Skylines had a certain Neo-soft, smooth sound that simply made you feel good. It needed to be something you could listen to for long hours. Cities: Skylines players are notorious for going all night long to the rhythm of music, so it's quite an important aspect!

For this particular project, Tobias met with multiple producers to discuss how to create a seasonal feel to the game with these Holiday songs. Together they put together a reference list of music from Spotify and YouTube, examples to which they could glean inspiration from. The ideas were brought forward to Colossal Order and other members of Paradox Interactive, and back-and-forth they went until everybody felt happy with the direction chosen for the music. Collaboration at it's finest! Tobias was sure to mention how important it was to make sure that the developers felt that the music "felt right" for the game, throughout every step of the process.

So when the foundation was set, it was time to roll up some sleeves and get to work! I thought it best to break it down to a numbered list to show you the steps taken to turn "We thirty thousand truckers are" into a game-worthy radio station song!

*Tobias at work in his studio, creating the music for a recent Stellaris trailer


Enough Talk - Show Me the Music!

Alright alright. We're almost there =) Let's get listening to the astounding songs that are now available all over your City's radio stations! 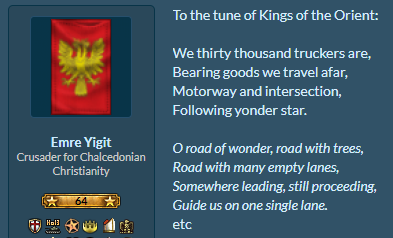 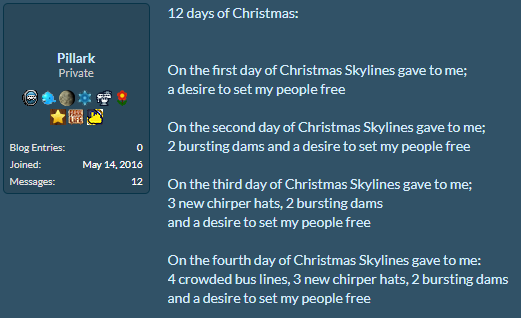 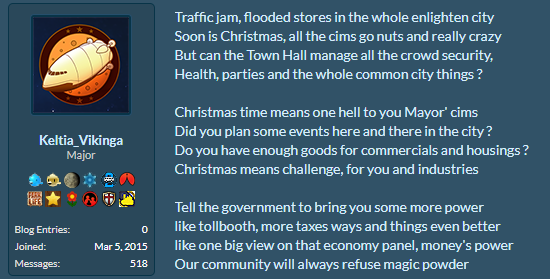 We hope you've enjoyed this 2 part Dev Diary! From all of us at Paradox Interactive and Colossal Order, we wish you all a happy holiday season! We're looking forward to 2019 and all the new content we've got planned for each of you.

Aww i missed the call for submissions, it wasn't on the main page and i'm out of habit of checking the skylines forum
Toggle signature
Steam profiles: http://steamcommunity.com/id/lrbaumard
Its Lrbaumard not Irbaumard.

*Tobias at work in his studio, creating the music for a recent Stellaris trailer
Click to expand...

Aww, I really like these songs! Only the last one seems Christmassy, but they are all really nice to listen to!

I translated the members' songs to French here

I am a noobie here, there is any news fixing AI in traffic to use more lanes thank one?
A

0018andrew said:
I am a noobie here, there is any news fixing AI in traffic to use more lanes thank one?
Click to expand...

Won't happen. Cause there is nothing wrong with the AI.
Toggle signature

You can, under some circumstances, design roads to cause the traffic to utilize more lanes. 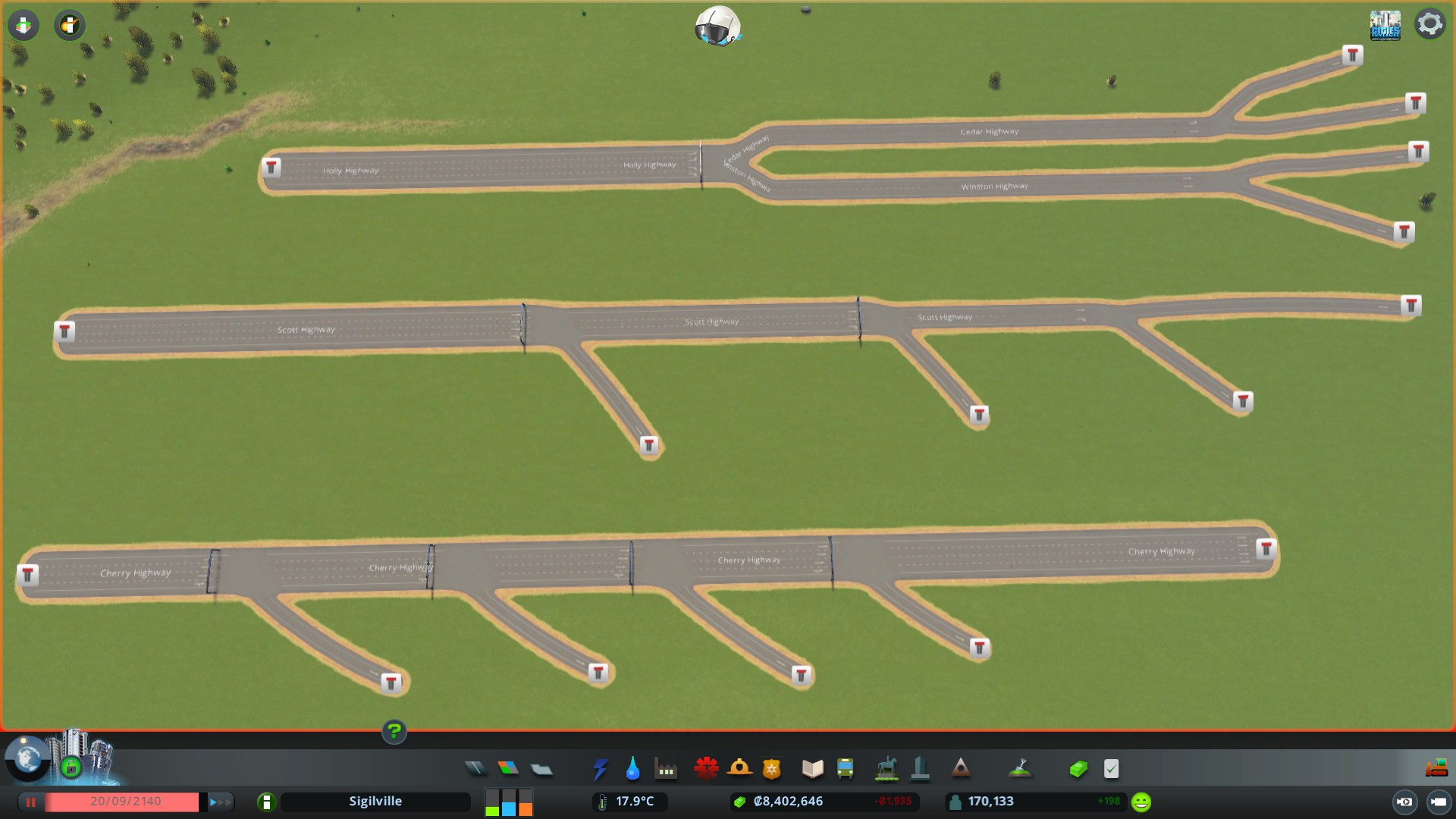 The bottom one will pretty much all use one lane.