Jump to latest Follow Reply
Menu
Install the app
You are using an out of date browser. It may not display this or other websites correctly.
You should upgrade or use an alternative browser.
Hearts of Iron IV 37731 After Action Reports (AAR)

Welcome to the art portion of Hearts of iron 4(HOI4) dev diary series. This diary will focus on the visual aesthetics of the game and sexy graphic-stuff.
My name is Joakim Larsen and Im a 3D artist working with the HOI4 team on giving players of HOI4 the most visual pleasure out of the game.

Today we are happy to show some of the work we have done on the graphic side of HOI4.

For this dev diary, please ignore borders and country colors. Focus instead on the visual look of the images we will show. Borders, country colors are not final and are subject for change (Podcat: I know he says that, but I also know you all can't resists ).


When we first started out working on HOI4 we knew that we wanted a realistic feel for the game (realistic in a way that its okay having a 5km tall man standing in your province).

We felt that a realistic style would match the game and setting, World war 2 isn't childsplay(right?). Therefore instead of going for example a more stylized handpainted look we have gone with a realistic rendered style meant to mimic reality.
For this we have improved our lighting and shading substantially. Instead of just having texture channel control the specular of the item, we now have both glossiness, reflectivity and metallness (yes thats an actual word). We also use HDR, all adding up to giving a more physically correct look, and adding to the feeling of realism.

We also knew that we wanted to do alot better than Hearts of Iron 3(HOI3). 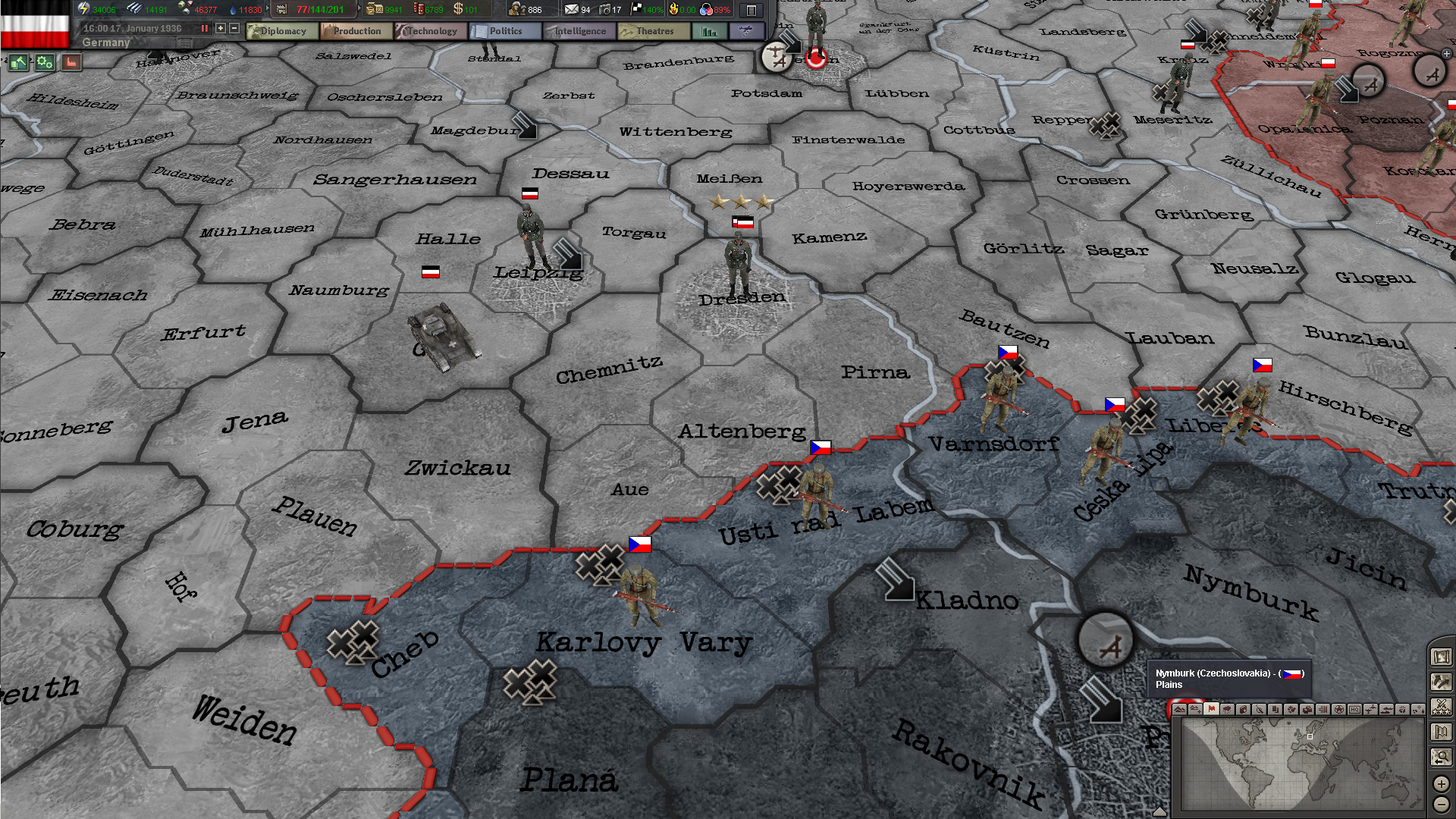 Say what you want, sure it has its charm - but I hope I wont need to have this argument after this dev diary.

The map has been through a lot of iterations, changes, paintovers and hard work to get to this point and we are now very happy to show it in more detail. 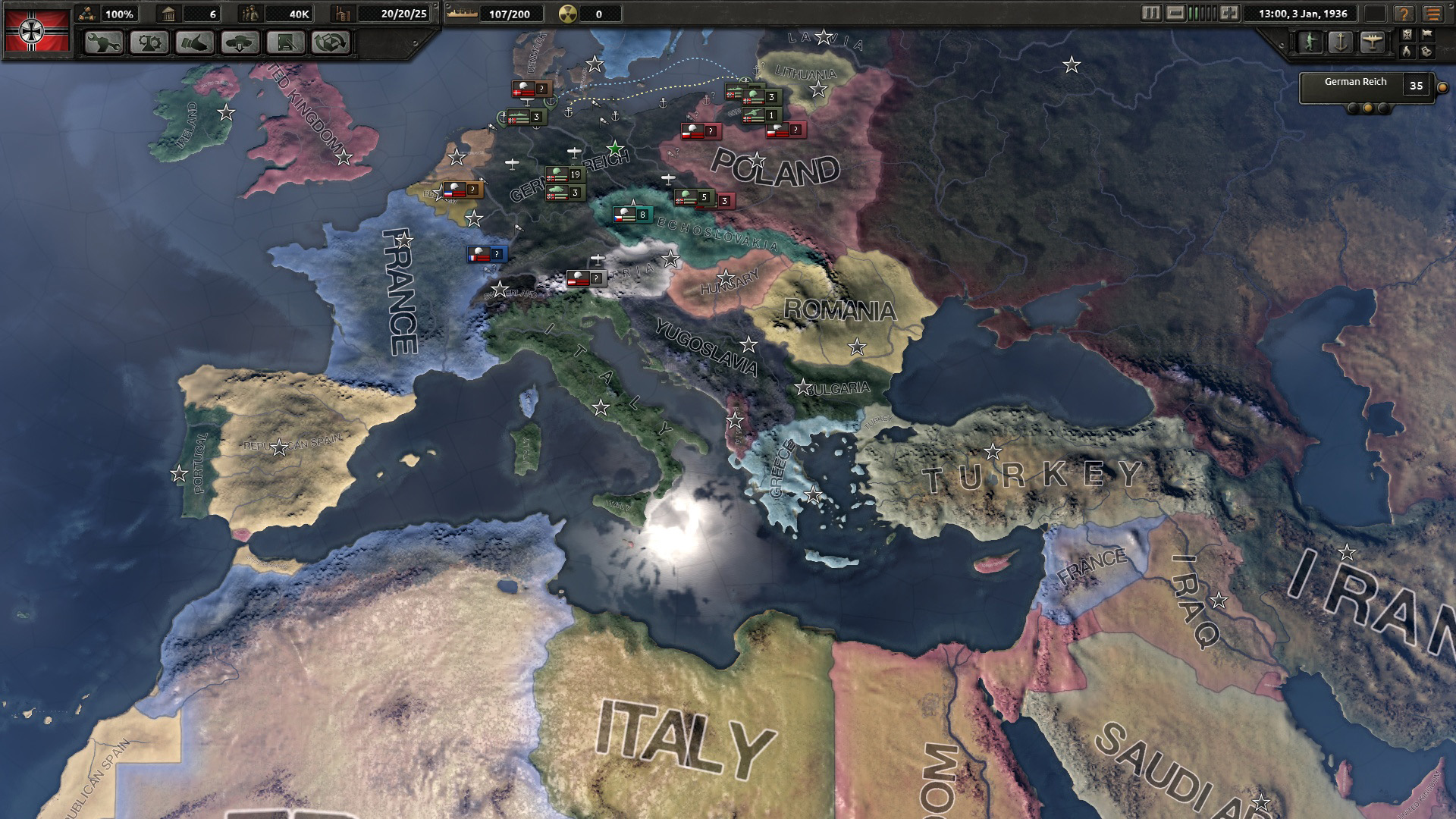 Gradient borders
In all our games we have tried to make the game look as pretty as possible, this is what is shown in screenshot and trailers.
Unfortunately, this is not how players choose to play, the info you need is not clear enough in terrain map mode, so political map mode is the only choice.

So in HoI4 we finally had the opportunity to try a solution we have had in mind for a while. Have a terrain map mode, with large fading gradient borders. Along with having political map mode fade in as you zoom out.
This way we can have the cake and eat it. You can clearly see countries territories when you zoom out. And when you zoom in, you can still clearly see the country border, while at the same time clearly seeing the terrain.

We have built a system that enables us to control the lighting and mood depending on where you are in the world. Depending on what zoom distance you are at, and what season your looking at, what time of day it is and if you are far out on the sea.
In short the desert feels warm, Europe feels green and winter feels cold.
We think this will make the world more believable and varied and that its a really nice visual flavour. 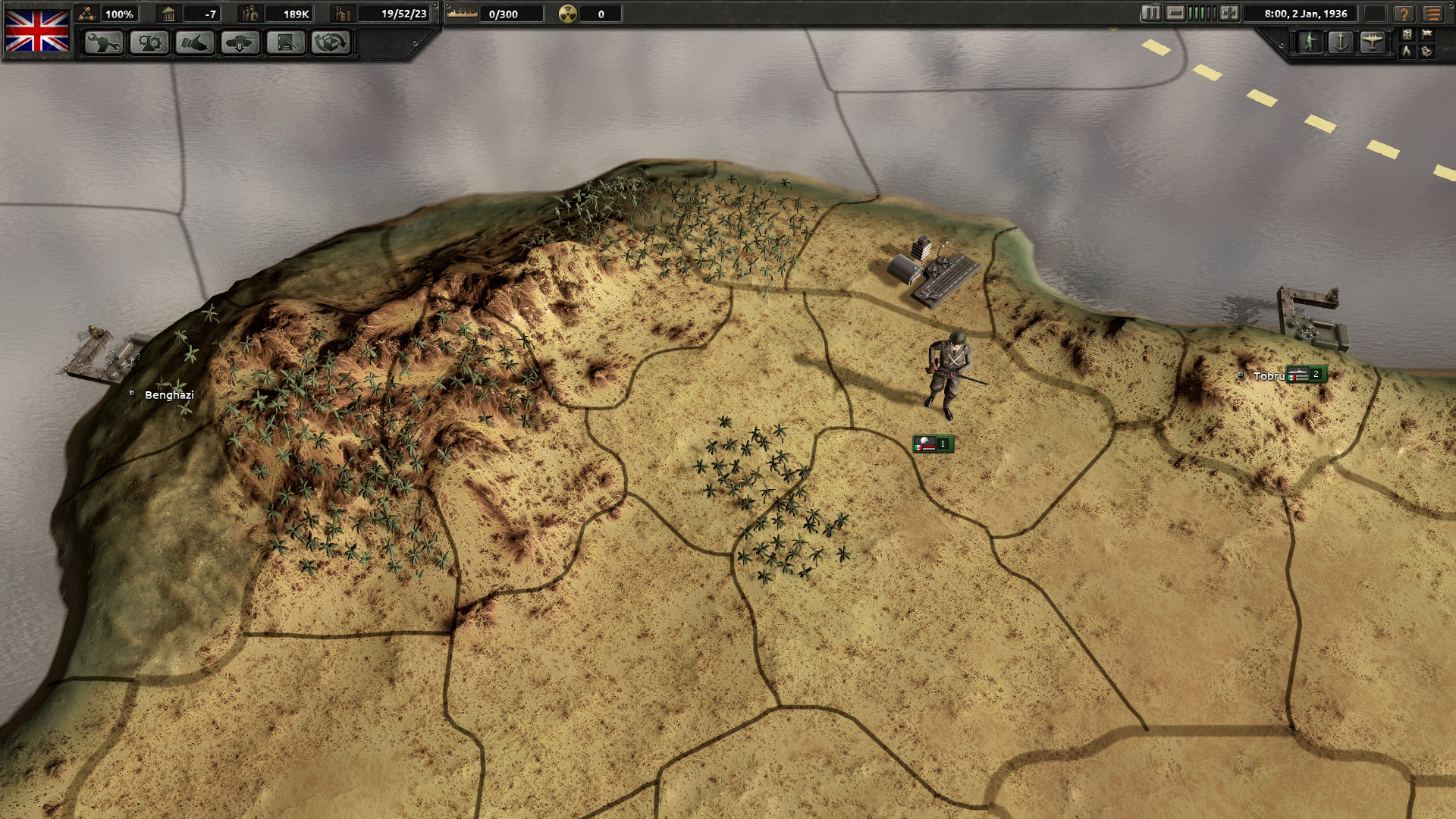 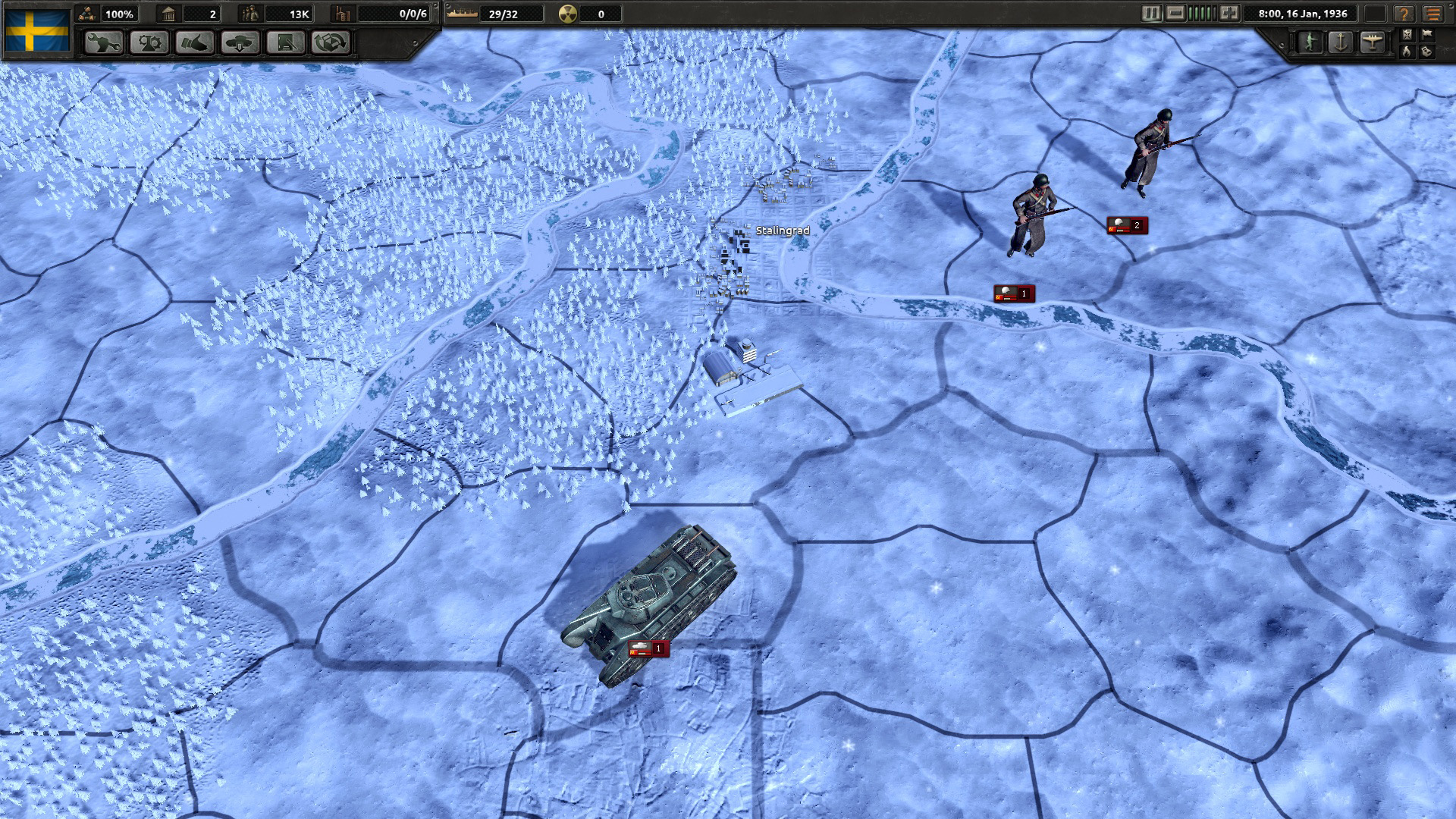 Terrain types
In HOI4 each terrain-type will have different penalties or advantages therefore its vital that it is crystal clear to the player so that you can see what terrain type a area has. 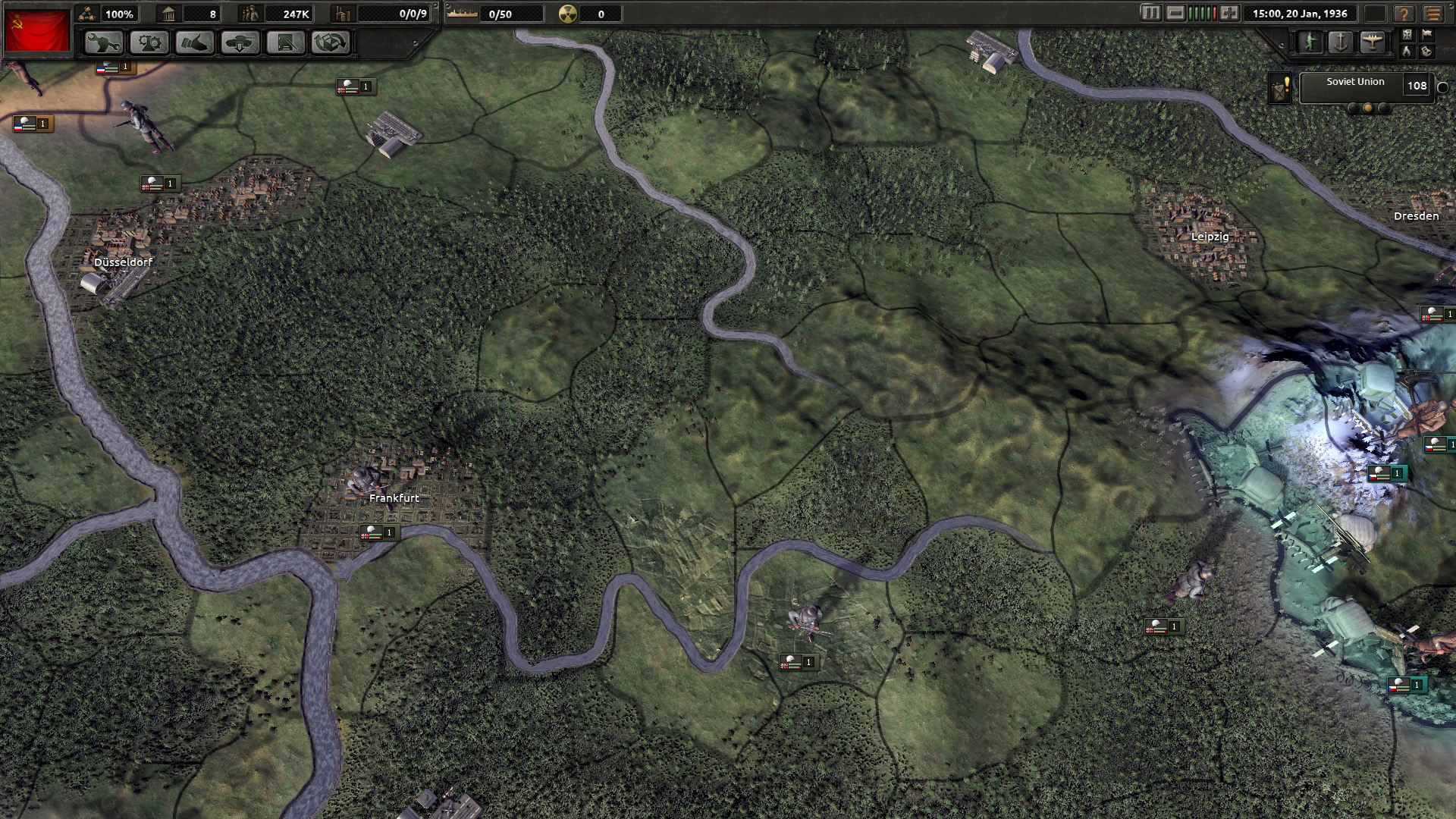 Weather
Weather has a big impact on gameplay but was in HOI3 hidden away in a separate mapmode which you quite often did not look at. HOI4 now displays weather directly on the map depending on zoom distance, to make it instantly clear what is going on. We will have another diary later focused on all the gameplay aspects of weather, but we simulate rain/storms, snow/blizzard, mud as well as sand storms currently. 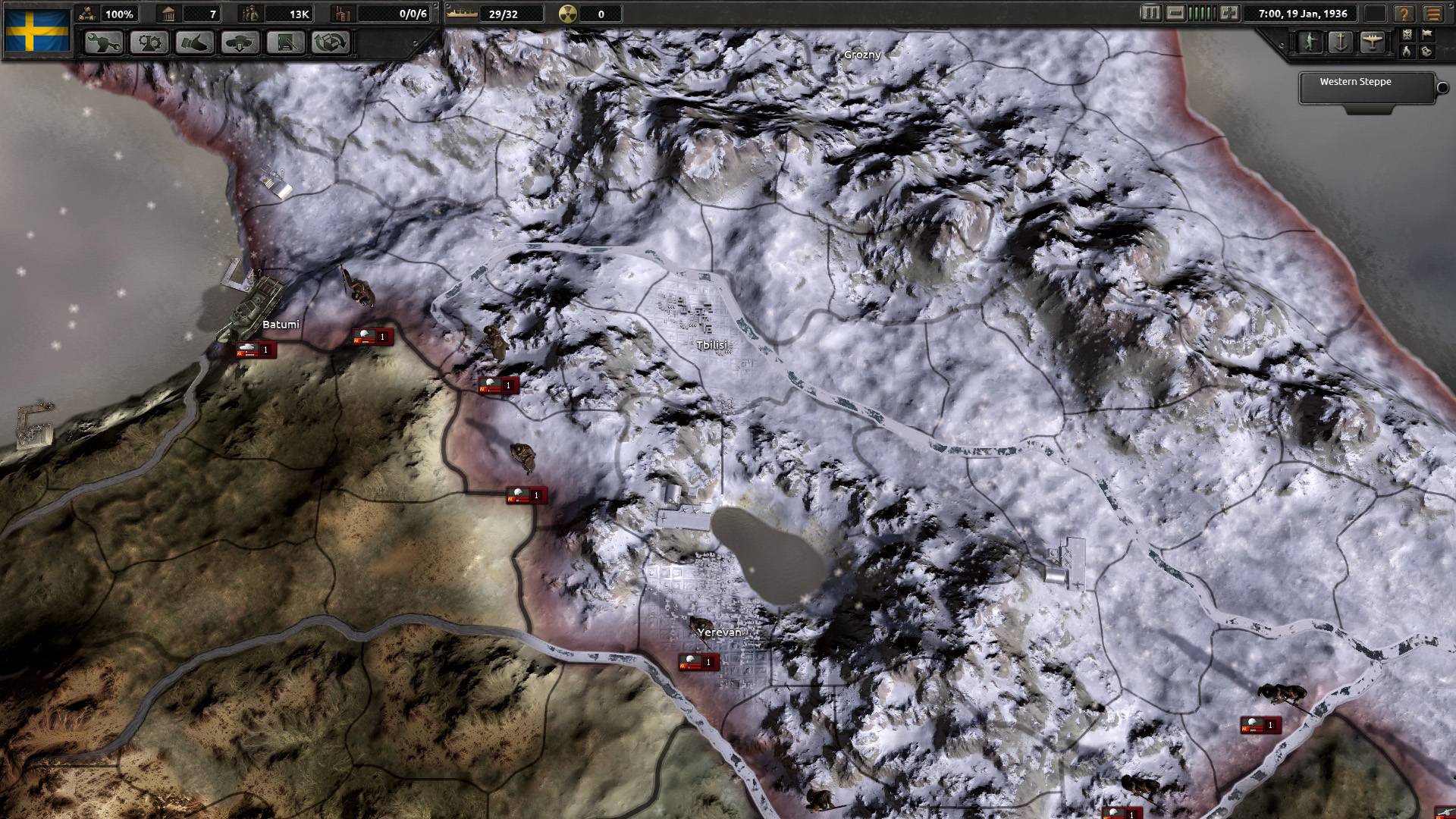 Day and night cycle
Hearts of Iron has always had day and night, and the time of day matters. This has however not been very clear. Very early on we added night and day cycle and loved it instantly.
This feature has meant trouble for art at every turn, but we still think it adds a lot to the game, both aesteaticlly and gameplay wise.
During the nights city's light up, and everything get a more night-look. 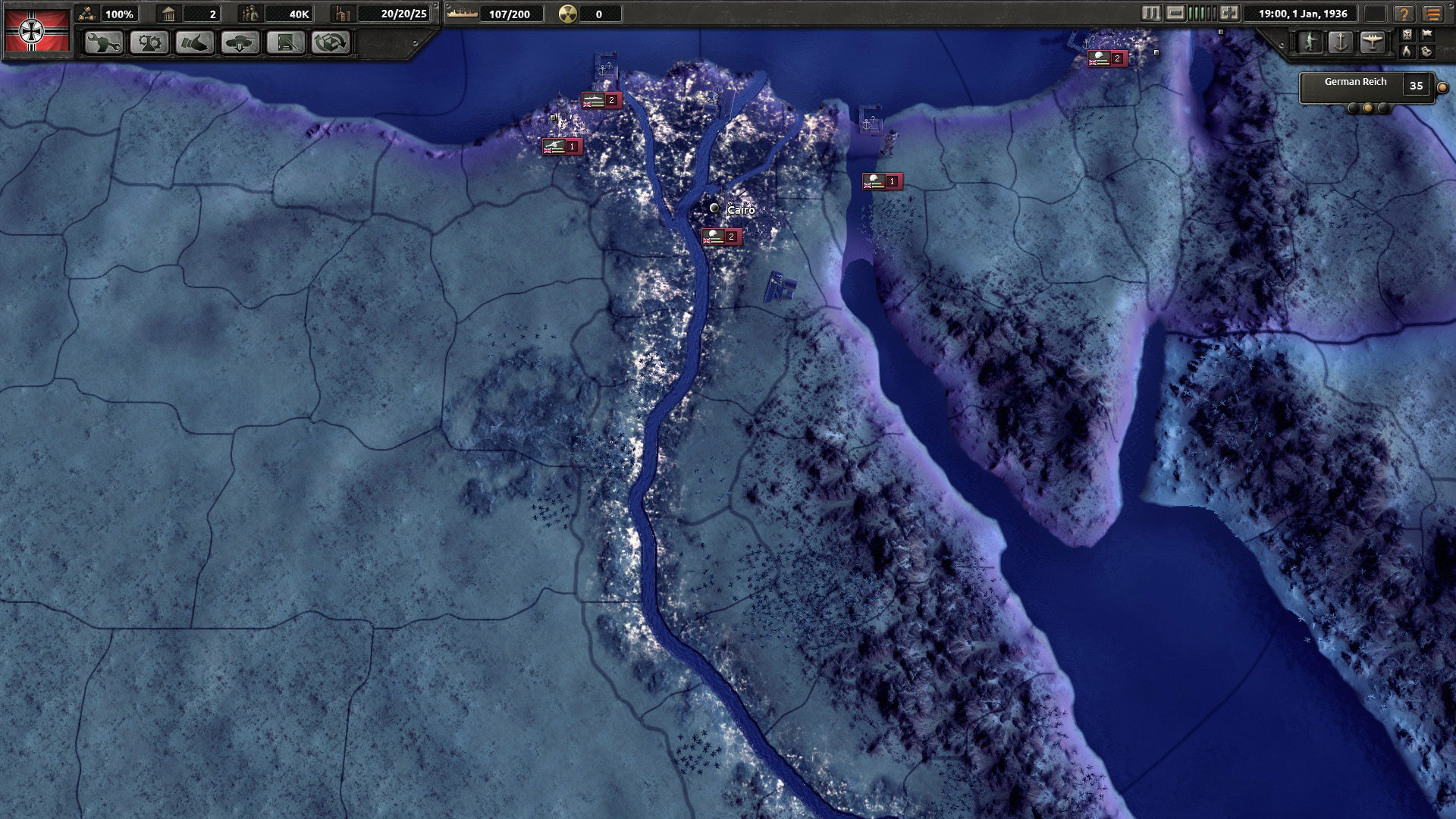 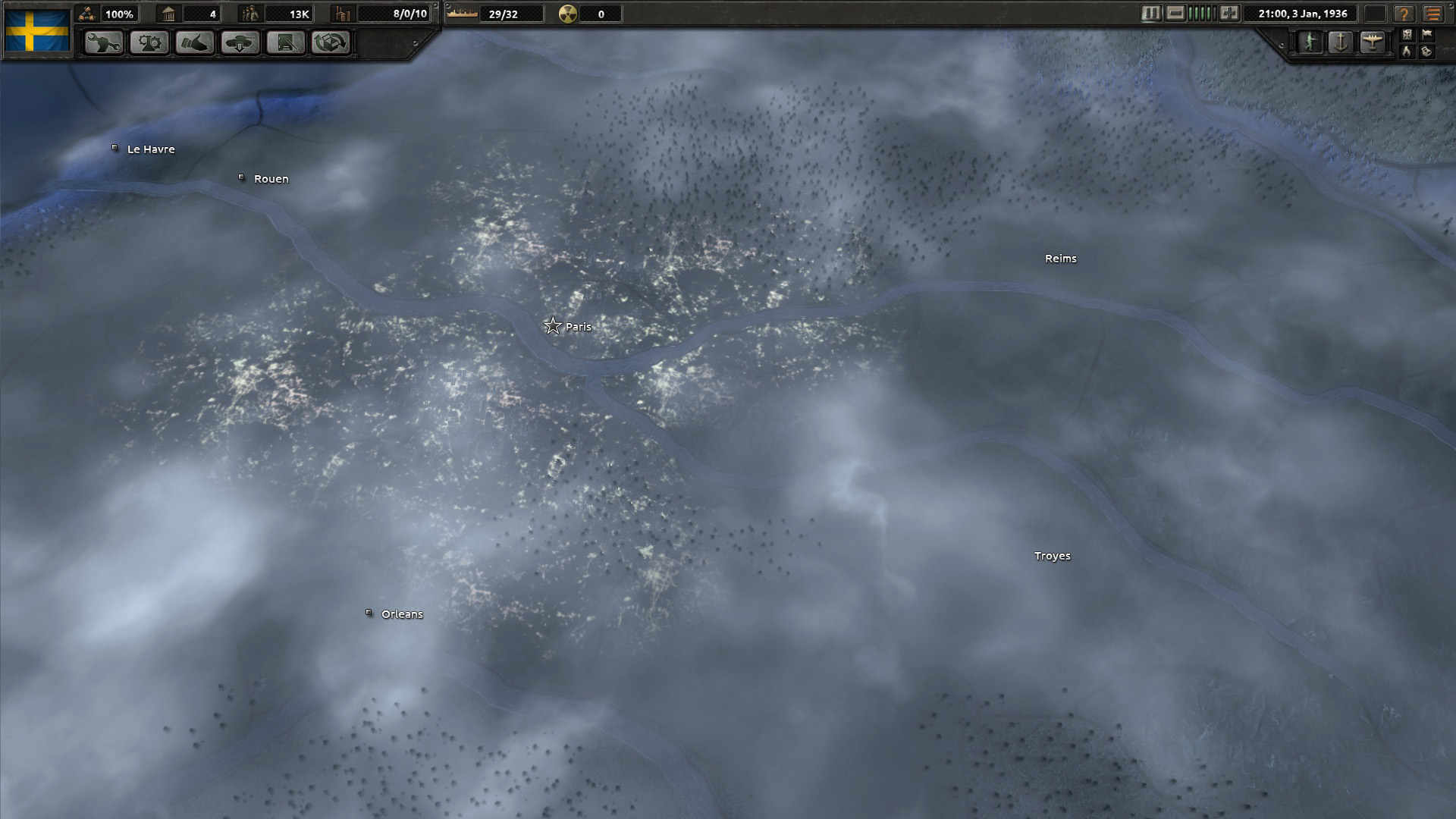 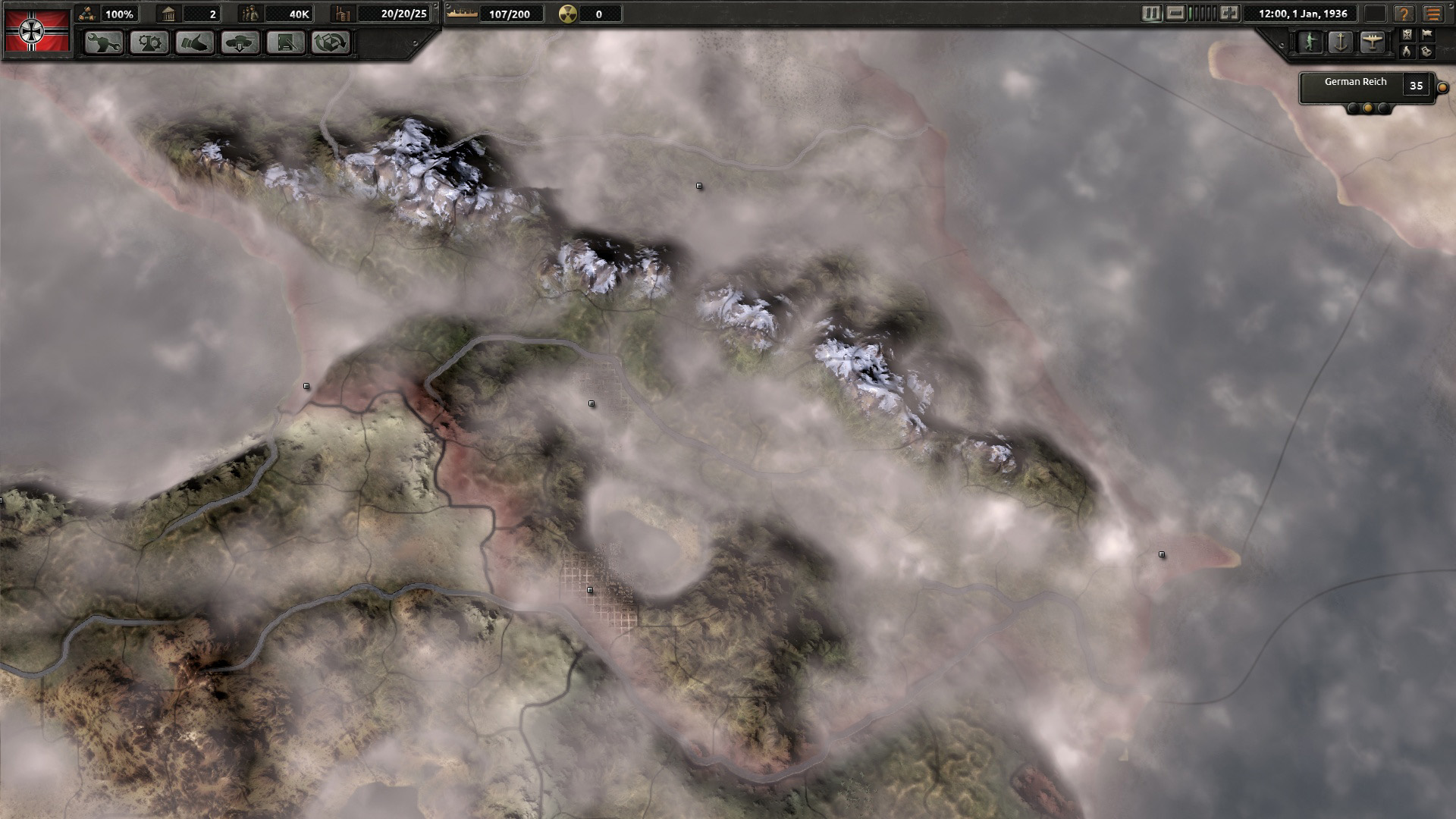 Characters and tanks
With HOI4 we wanted to really make the characters and tanks be as good as possible since they are key gameplay markers on the map.
We start with making a high resolution polygon model of the character. When that model is as good as its get we start doing a low resolution model.
Then we use various methods of transferring the details from the high resolution model to the low resolution model, making them indistinguishable with the use of normalmaps.
That starts off the texturing process where we give each area texture and makes the model pretty. 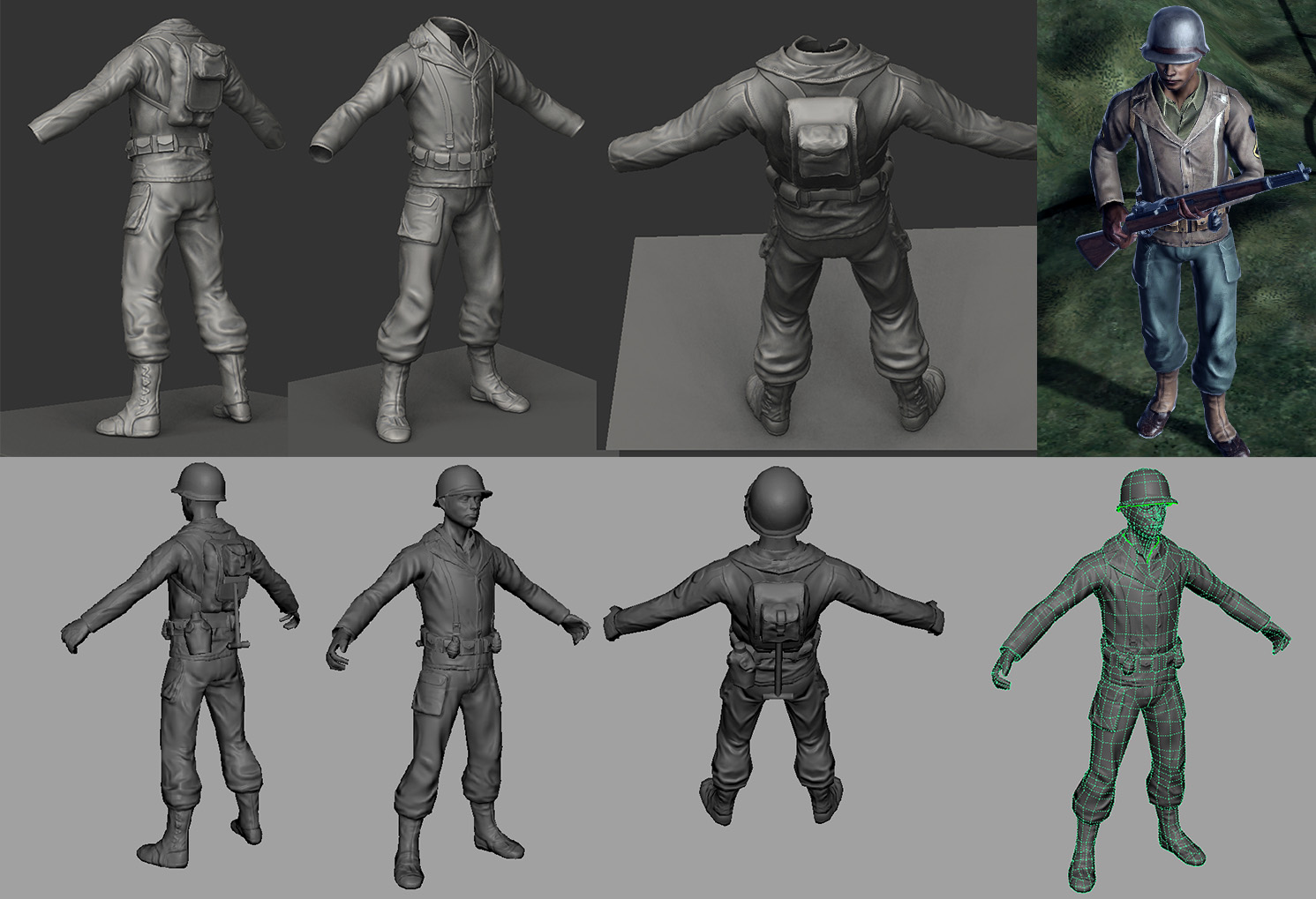 Thats all for this time!

Hope you like what you see. We are proud of alot of things with the map and alot cant really be told or shown in screenshots - you have to see it for yourself to really enjoy it.

Feel free to leave any comments and I'll read them. (Podcat: Please be gentle he is only an artist).

So where are the counters?

*runs off to hide*

first game for sure will be france

Looks fantastic. So much more information is conveyed at once and in a very aesthetically pleasing fashion.
Toggle signature
Extremely dangerous to our democracy.
Reactions:


larre said:
Feel free to leave any comments and I'll read them. (Podcat: Please be gentle he is only an artist).
Click to expand...

question 1: Is UI scalable enough, so that if I have 28" 4K monitor, UI will still be usable?

question 2: Will Fog of War be impacted by how good our intel is?

question 3: Will next DD be in december, or will you release DDs more often?
Toggle signature
"People willing to trade their freedom for security deserve neither and will lose both"

I like the gradual color fade near the borders, which should be far more informative than the individual map modes for HOI3. On the other hand, snoopy1710 just took my hiding spot, because I'm going to have to ask the same question: "Where are the counters?"

Yay!
Toggle signature
"For every monarchy overthrown the sky becomes less brilliant, because it loses a star. A republic is ugliness set free." – Anatole France

Wow, that's some impressive work with the map. Looks great!

Will the characters and tanks be moddable?
Toggle signature
New HoiIV mod The Fox And The Lion -- Still A Work In Progress

Tired of playing HoiIV? Miss proper counter stacks? Want more depth and immersion? Check Out Fox And The Lion Battalions. FNLB is a full featured mod for Hoi3 TFH with added detail, depth, and immersion. It is playable as any nation but with extra emphasis on Italy.... and the counters are awesome.
A

So if i am Haiti for example, the whole world is covered in fog or what? Is there a possibility to turn it off? Because i want to see the world in a normal way

Why does Hungary have this ugly pink colour? Give Hungary back its wonderful green colour like in HoI3.
Toggle signature
Roma Invicta!
Reactions:

I am somewhat worried that FOW will make battle planning a problem due to poor visibility (the screen of France is good example).

How does the FOW impact performance?
Toggle signature
Cybvep's AARs

Looks really, really nice. You get a sense of perspective and height that's been missing in other Paradox games. The new day/night cycle and FOW looks fantastic.
Toggle signature
"'Join me, and together we can rule ther galaxy as father and son'. What do you think the implication for the Emperor was, we'll get him a retirement home in the Crimea?"
-RedRalphWiggum

BTW I think that the zoomed out map would look much better if it was more like a paper map. I think that ATM it looks a bit too video gamey.

would have LOVED to see counters on the current map.........
Toggle signature
"Ideals are peacefull, history is violent"
Show hidden low quality content