Jump to latest Follow Reply
Menu
Install the app
You are using an out of date browser. It may not display this or other websites correctly.
You should upgrade or use an alternative browser.
Hearts of Iron IV 37727 After Action Reports (AAR)
Show only dev responses
Threadmarks
Reader mode

So the components would be: chassis, engine, turret, and armor? I don't think the radio and machine guns fluctuated much beyond 2-3 different types that would make much of a difference.

On the other hand, planes would have: engine, armor, machine gun, and fuel tank (range)?
K

Metz said:
So the components would be: chassis, engine, turret, and armor? I don't think the radio and machine guns fluctuated much beyond 2-3 different types that would make much of a difference.

On the other hand, planes would have: engine, armor, machine gun, and fuel tank (range)?
Click to expand...

I think a module should be inserted for the radio similar to that of Asdic for ships, let us remember that a great advantage of German tanks compared to their rivals was precisely because all tanks had a radio in their armor, something did not happen in their enemies


and there should also be another specific module for the armored weapon
Reactions:

Metz said:
So the components would be: chassis, engine, turret, and armor? I don't think the radio and machine guns fluctuated much beyond 2-3 different types that would make much of a difference.
Click to expand...

Well, in early tanks the machinegun(s) constituted the whole armament, so... Also, there are differences between a machinegun, a heavy (.50 caliber or 12.5mm) machinegun and a cannon (20mm up to 57mm were used). Plus turret sizes were critical, space for a radio important, range had to be considered, different tracks gave different soft ground performance...


Metz said:
On the other hand, planes would have: engine, armor, machine gun, and fuel tank (range)?
Click to expand...

Um, and bomb bays and racks, torpedoes, depth charges, rockets, electronic navigation and radar systems, different calibres of "machinegun" (see for tanks, above), self-sealing fuel tanks, high visibility canopy for the pilot, turbochargers and superchargers to give altitude performance to the engines...
Toggle signature
Balesir.
======
I made a mod for Hearts of Iron IV, which you can read about here, originally called Waltzing Matilda (after a tank).
Reactions:

I hope they make assault guns viable. I have a kink for em.
Toggle signature
Hallo
Reactions:
G

kimidf said:
reviving the Byzantine empire in the Greek
Click to expand...

Plausibility has different levels. Maybe for historians more aware of Greek history reviving Byzantine empire seems stupid. But for ignorant westerner it sounds great! For me it also sounds fun.

Unfortunately, I am lacking a point of view westerners have about Poland. Is a monarch tree the same mix of fun/plausibility reviving Byzantine empire is? Because for people more aware of Polish history it certainly is not!

Note, how big monarch tree is. But gameplay wise, it changes nothing. You gain fascist/neutral/communist ideology just like in default tree, which seems boring. There was not really a point to add those different ideologies again in monarchism tree.

That's why developer needed to make it more unique, which made it even more strange and peculiar.

What could be done instead? A trick of using peasants' strikes to go communist is a great example! Some dealing with Danzig, even if not historically plausible (link in my signature) is also fun gameplay wise.

What more could be added? Federation/alliance with Czechoslovakia. Just hold your anger, let me explain! Before 1936 Czechoslovakia was making multiple attempts to form a military cooperation with Poland and to resolve all border conflicts. They were aware Germany is planning something. But, Poland's priority in those times was not to anger Germany. Any alliance with Czechs would be seem as anti-German.

The last moment for such an cooperation was a letter from Beneš to Mościcki sent on 26th September 1938. He agreed even to give back Zaolzie to receive Polish alliance or at least neutrality. Poland de facto ignored it and made ultimatum to take Zaolzie. It was one of the most important reasons (as Beneš stated in his books) he decided to not fight Germany.

Now, this is a plausible and interesting what-if for gameplay! Imagine German tanks attacking forts on lvl7 in Sudeten mountains with help from Poland!

How it could look like? Here is my oversimplifaction
1. Event "A letter from Czechoslovakia": Germans are threatening us! Can you help?

- Yes. Receive a spirit Czechoslovakian-Polish military cooperation​
- No. Send ultimatum to take Zaolzie back​
2. Spirit Czechoslovakian-Polish military cooperation should raise acceptance of diplomatic efforts for both countries, making them more likely to join each other faction. It should make Czech diplomacy deny cediing territory. They would fight!

Another interesting path? The whole prometheism idea. Poland was hosting and supporting financially Government of the Ukrainian People's Republic in exile. It was mostly to keep Ukrainian minority calm, but what if it could be used to destabilize Soviet Union?


kimidf said:
and for a long time I have developed them by making the decision to insert all the possible ideologies in all the trees without thinking about the degree of plausibility
Click to expand...

Excuse me, are you Paradox developer or mod maker? I am still newbie in the forum and I don't know how to recognize it.

The wait for this DD is killing me ngl
Reactions:

So when is the devblog?
Toggle signature
Hallo

I think some greek leaders after defeating Turkey solo could be swayed to "revive the Byzantine Empire", meaning just calling themselfs like that. Similar how Germany can call itself Greater German Reich.
The problem I, and I think most other people that are critiquing it is, that this reformed Byzantine Empire gets cores in variois places, completly removing resistance with a button press and getting all factories and manpower.

If it would be locked behind 95%+ conpliance, fine. But it isn't even with 0% compliance you can core Turkey, that is the bad part.
Reactions:

Spelaren said:
So when is the devblog?
Click to expand...

They usally come out around 16:00 CET

Spelaren said:
So when is the devblog?
Click to expand...

Recently most of them were at 15:00 CEST and today it is as well: https://forum.paradoxplaza.com/forum/threads/hoi4-devdiary-tank-designer.1470406/
Toggle signature
Reject reason and you get hoi4 | bugs | suggestions | Please ping me in a thread instead of DMing whenever possible | Read the forum signatures of moderators and draw your own conclusions | Buying DLC will not fix your grievances with the base game. On the contrary, you'll support the status quo.
Reactions:

What time is the teaser today?
Toggle signature
"Alaska Is Canadian Territory!" - Me
“Will license leasing affect autonomy in Death or Dishonor?”- Me, the spammer on twitch streams
"Could you change integrated puppets to a similar colour to their overlord?" - Me during the Man the Guns release

Trevok said:
What time is the teaser today?
Click to expand... 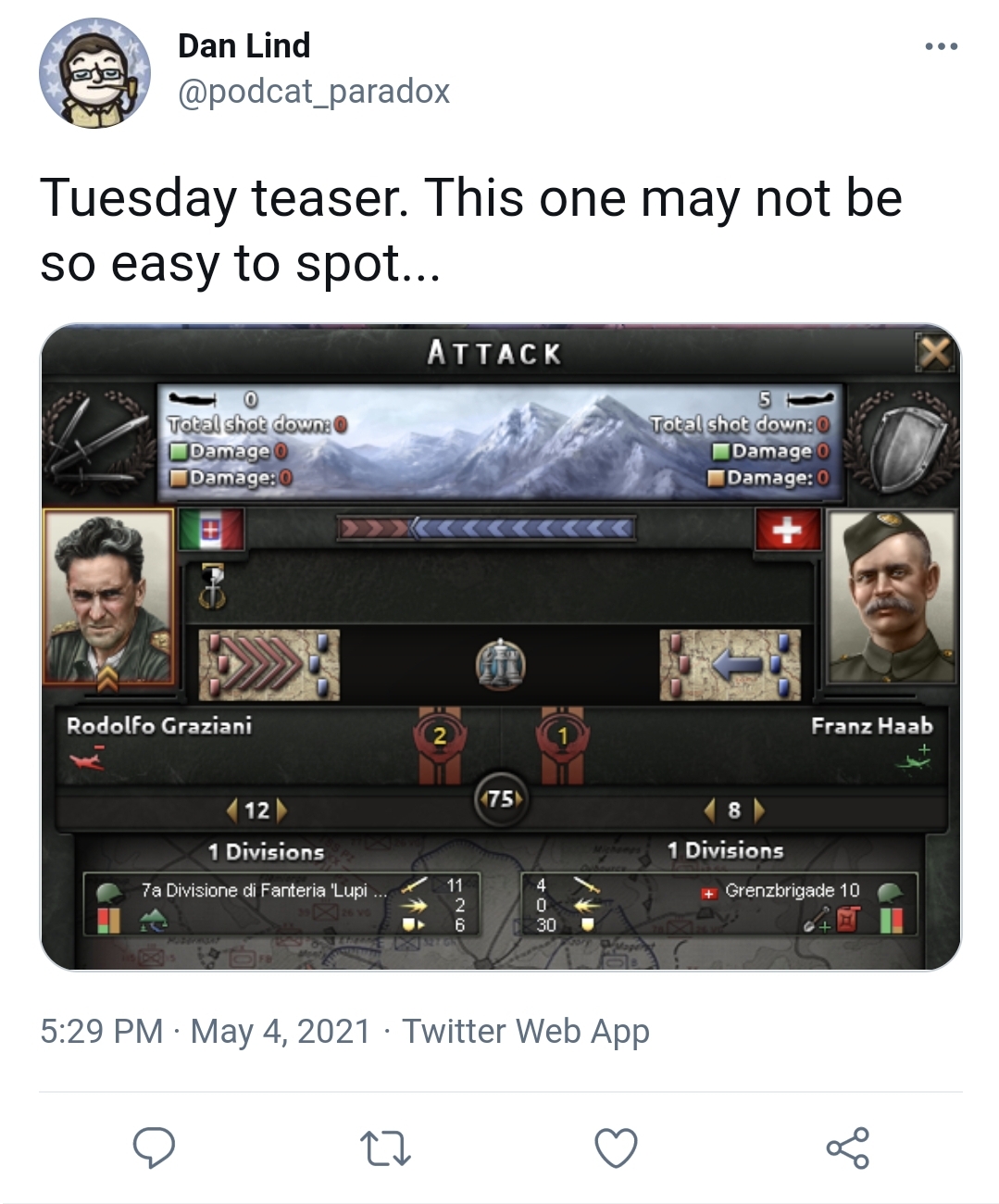 Switzerland FT? Did not see that coming.
Reactions:

Minute of silence for the guy on Twitter who thought it meant Italy was getting a focus tree.


Seriously, though, I'll go with what the other people on Twitter that it has to do with the wonky combat width. Combat rework?
Toggle signature
PSA: in dealing with trolls, I have found reason to be useless, and ignore lists to be indispensable.

Edit: the tactics rolled are Shock and Defend, neither of which currently affect combat width. So I'm guessing it's terrain based combat width, hopefully with some tactics mixed in
Reactions:

Possibly doctrine reworks? Everything else seems the same, unless the mountaineers have a new effect icon?

75 base width? not gonna change all that much, depending on how flanks are handled.
Reactions:

75 base width? not gonna change all that much, depending on how flanks are handled.
Click to expand...

I think the idea is to break the dominance of 20, 40, etc width divisions and encourage other designs. Idk how effective it'll be but it might work dependong on how they handle it
Reactions:

It's the combat rework we've been waiting for.
Toggle signature
Unit AOs suggestion