HOI4 Dev Diary - Together for Audio

Menu
Install the app
You are using an out of date browser. It may not display this or other websites correctly.
You should upgrade or use an alternative browser.
Hearts of Iron IV 37313 After Action Reports (AAR)
Show only dev responses

For this Dev Diary I’ll talk about something you might not be that used to have in Hearts of Iron franchise:

For this expansion I wanted to do something more with the audio and trying out something completely new for our history based games. So I wanted to have your units reply back in their native tongue whenever you select them and giving them order and there should also by different Voice Over lines when you select units during combat, if you now are playing as a country which we support Voice Over for now.

Here is a short overview on which languages we have recorded:
Of course since our office is in Scandinavia we wanted also let some of the our Dev's from the Hearts of Iron 4 team record their own voices for our Nordic languages. I’ll let you guys try to figure out who has provided with voices once you have the expansion.

I have attached a small youtube video which will give you a sense on how the German, Russian and Japanese VO sounds and triggers in the game:

I want to talk about another topic and that is mods! With the new Voice Over system and script it is easy to mod your own Voice Over for the current languages and for other countries.. The easiest way to mod in your own audio files is simply just changing the .wav files to your own .wav files with the same name or just change the path in the .asset file.

Below I’ll go more in depth in how you can script in your own Voice Over for those who might be interested:

First thing you need to find is which “landcodes” we’re using in the game and you can locate these “landcodes” / country_tags in this folder: \Hearts of Iron IV\history\countries

These landcodes / country_tags are important if you would like to mod in Voice Over for other countries than those we support at release of the expansion.

Then later on you will need to open up the audio asset file which you will find in the dlc folder and it will be called “vo.asset”. After that you will mod the audio script like below:

Here is how the German “soundeffect” may look like:

But if you replace “GER_” in the “soundeffect” instead to “HOL_” it should look like this:

Now the German Voice Over will be triggered for Holland units when they are in combat instead for German units. You will apply the same method for the other type of Voice Lines which are scripted:

Just script in the right landcodes and script in audio assets and I think you will be able to create really cool audio mods.
Music: (handing over to Andreas Waldetoft here...)
I have already done some British music for vanilla Hearts of Iron 4 score, but I wanted to expand on that and have an even more appropriate mood when playing as commonwealth countries. From fire ridden London, to tanks helping the British to victory in El Alamein. Together for Victory will come with 3 brand new themed tracks.


To make managing and playing your music easier we are also adding a music player as part of the free 1.3 (Torch) patch. 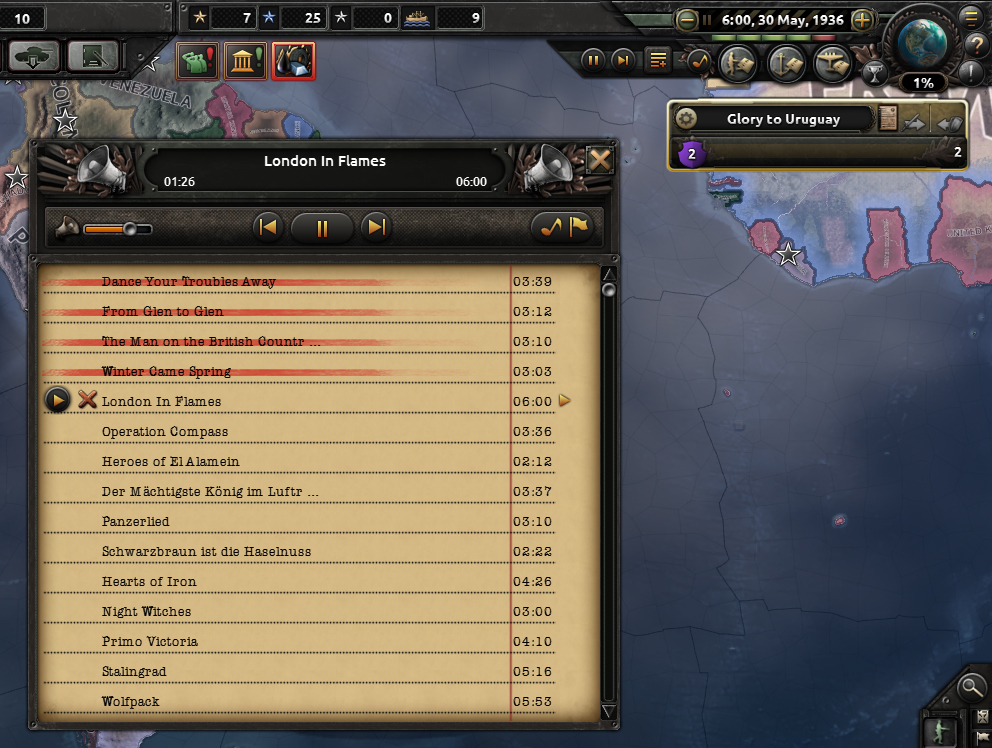 it lets you play/pause/skip songs and lets you pick of you want to use the regular in-game weighted song picking (certain songs for axis/allies/commintern etc) or plain random. Playlist changes are remembered also in your settings.

Next week we will be looking at a bunch of new game stuff as well as taking a look at new art & models!

@podcat : Don't miss the World War Wednesday stream today at 16:00CET over at https://www.twitch.tv/paradoxinteractive! Me and Daniel will be trying out the Great War mod for the first time
Last edited: Dec 2, 2016
Toggle signature
As the man himself said once:
- More is more.
Reactions:

Metal King said:
Here is a short overview on which languages we have recorded:
Click to expand...

Why did you forgot Polish? You have so many fans in Poland....
Toggle signature
The cake is a lie.

Cool stuff! I want to have the voice of the russian guy (sorry forgot the Name) from WWW for russian Units!
Reactions:


wielkiciensteam said:
Why did you forgot Polish? You have so many fans in Poland....
Click to expand...

Yeah my inner Pole is crying. @podcat You have even a Pole on the HOI team.
Toggle signature
2D Art - Mesoamerica Universalis
https://forum.paradoxplaza.com/forum/index.php?threads/mod-mesoamerica-universalis.970935/
http://steamcommunity.com/sharedfiles/filedetails/?id=861977085​
Reactions:

When I saw the title of the DD, I was sort of "meh". Then I actually read it, and that is awesome!
Toggle signature
A conqueror is always a lover of peace, he would prefer to take over the country unopposed.
-Clausewitz
Reactions:

This is sweet, cant wait till release !
Reactions:

Kenshi said:
Cool stuff! I want to have the voice of the russian guy (sorry forgot the Name) from WWW for russian Units!
Click to expand...

Sadly my great Russian voice is not going to be in this voice pack, I guess because it is too good for professional acting. And just a reminder: my name is Ilya.
Reactions:

Wow, I really like the voice overs! And the new music track is awesome as the rest of the game soundtrack! Keep on the fantastic work
Reactions:

Am I the only one sad that they didn't employ the press officers from the mp stream and Steven? I find it hilarious though that every time a company uses Japanese language voice overs they always sound like they are constipated or angry.
Reactions:

Wunderbar! Paradox sind genial!
Hearing the beautiful German language being spoken while conque...erm....liberating Europe from the Bolshevik menace will make fighting for das Vaterland more glorious than ever!
Toggle signature
In war, the ultimate victims are the innocent.
-The Empathetic
Reactions:

I really like the voice overs! I just wish there were some Canadian, Australian, New Zealander, South African and Indian ones. But hopefully we can see them later.
Toggle signature
Lead modder for Equestria at War for Hearts of Iron IV. Founder of: The Four Nations - An Avatar: The Last Airbender Mod (CK2).
Reactions:

Very nice!
Now, could you fix the phantom factories, invasion with volunteers, console opening when hotjoin..?
Don't get me wrong, but there are plenty more important things.
Toggle signature
-Demos
Reactions:

Metal King said:
Here is a short overview on which languages we have recorded:

...... Um, did you mean countries instead of languages?
Toggle signature
Location: White Plains, New York
Ethnicity: 50% Dravidian(Malayalam) 25% Afro Caribbean(Jamaica) 12.5% European pos. Welsh or Dutch 12.5% Han
Culture: 100% Yankee
DOB: October, 6 1998
There are 3 things that are non-negotiable in this world: Democracy, Trains, and Victoria 3 - myself
The future is ours to decide. - Shulk, Xenoblade Chronicles
What's important isn't whether you can see the future or not. It's the will to make a choice, and the strength to seize your destiny! Our time has come. OUR DESTINY IS OUR OWN! - Shulk, again
Reactions:

Ain't all of them English?

songs are meh, but the idea of troops voices is nice. will it be free?
Toggle signature
Teikoku wa fumetsudesu
Reactions:

No release date yet
Reactions:

"Puppet? Puppet? I'm not a puppet. You're the puppet!"