Jump to latest Follow Reply
Menu
Install the app
You are using an out of date browser. It may not display this or other websites correctly.
You should upgrade or use an alternative browser.
Hearts of Iron IV 37720 After Action Reports (AAR)
Show only dev responses

Hi everyone! With the team now back from a few days on Malta (where we learned, among other things, that limestone walls trumps radar for warning about incoming italian bombers), we are back at full steam and have another dev diary for you talking about stuff coming in Together for Victory and the free 1.3 patch. First up is the new focus tree for New Zealand:

New Zealand
In 1936, the First Labor Government had just taken power in New Zealand, the smallest of the commonwealth dominions. This new government introduced a number of social reforms and created what would become the world's first modern welfare state. In practical terms, this gives you a much needed boost to your available manpower and provides more workforce for your factories, represented by a reduction in consumer goods required.

With a very small industry, you'll have to work hard to expand your production capabilities. Fortunately, unique resources in the form of natural gas, oil and iron rich sands are available for you to exploit. Several industrial initiatives are also available to you and lucrative technology sharing focuses will give you a valuable advantage if you remain loyal to the commonwealth.

If you choose to abandon Great Britain to it's fate however, there are three options for you. You could side with the Japanese as they are your biggest threat, or you could embrace the global revolution and form closer ties with the Soviet Union. The last option available is to establish a true independent New Zealand and take your own path. Perhaps by taking Australia on the way.

Some of the new leaders & portraits for new zealand

When working on the New Zealand tree, we wanted to include some important historical developments. The formation of the Royal New Zealand Navy and Air Force were important for the country's ability to defend itself. To aid you, two light cruisers and a number of aircraft will be transferred to the newly formed services.

The Charlton Automatic Rifle, although historically never deployed, was a modification of the Lee Enfield rifles for automatic fire. This was just one of many efforts to make do with what limited resources they had at hand.

Another such effort, perhaps not quite as successful, was the development of the Bob Semple "tank". This indigenous armored fighting vehicle was constructed from a tractor chassis, armed with no less than six Bren machine guns and was armored with corrugated metal plating. It was believed to be bulletproof. 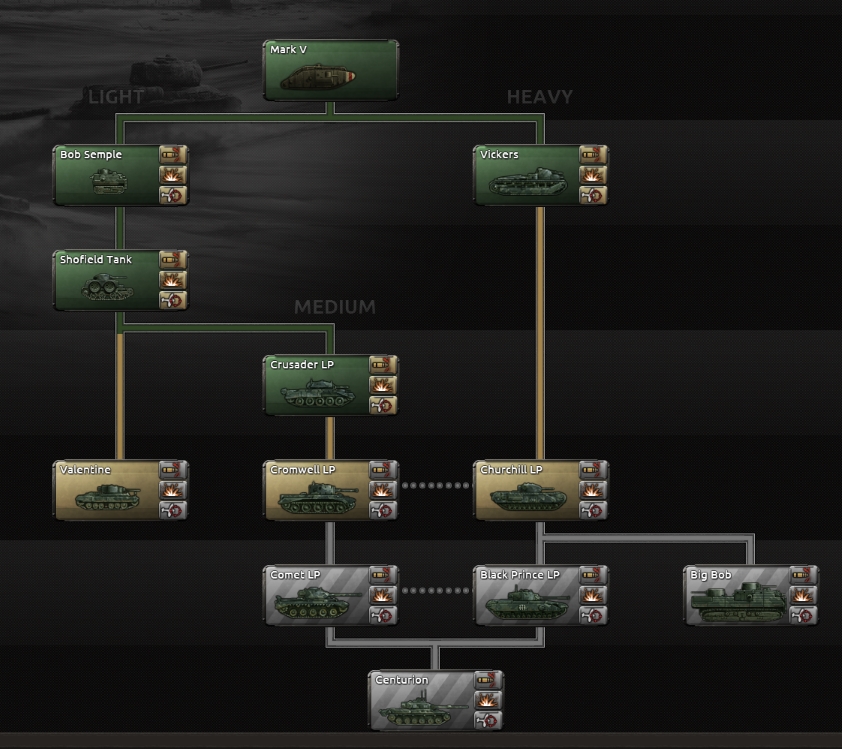 Combat Log
You might have spotted changes to the theater interface in earlier screenshots, and now is the time to explain whats up!

First of all there are two new indicators on the right. These show you how many active defensive and offensive combats are going, and if any of them are having problems. Its a good way of noticing if there are changes to the status of a front at a glance. Next to them is a button that opens up a brand new interface: The combat log. 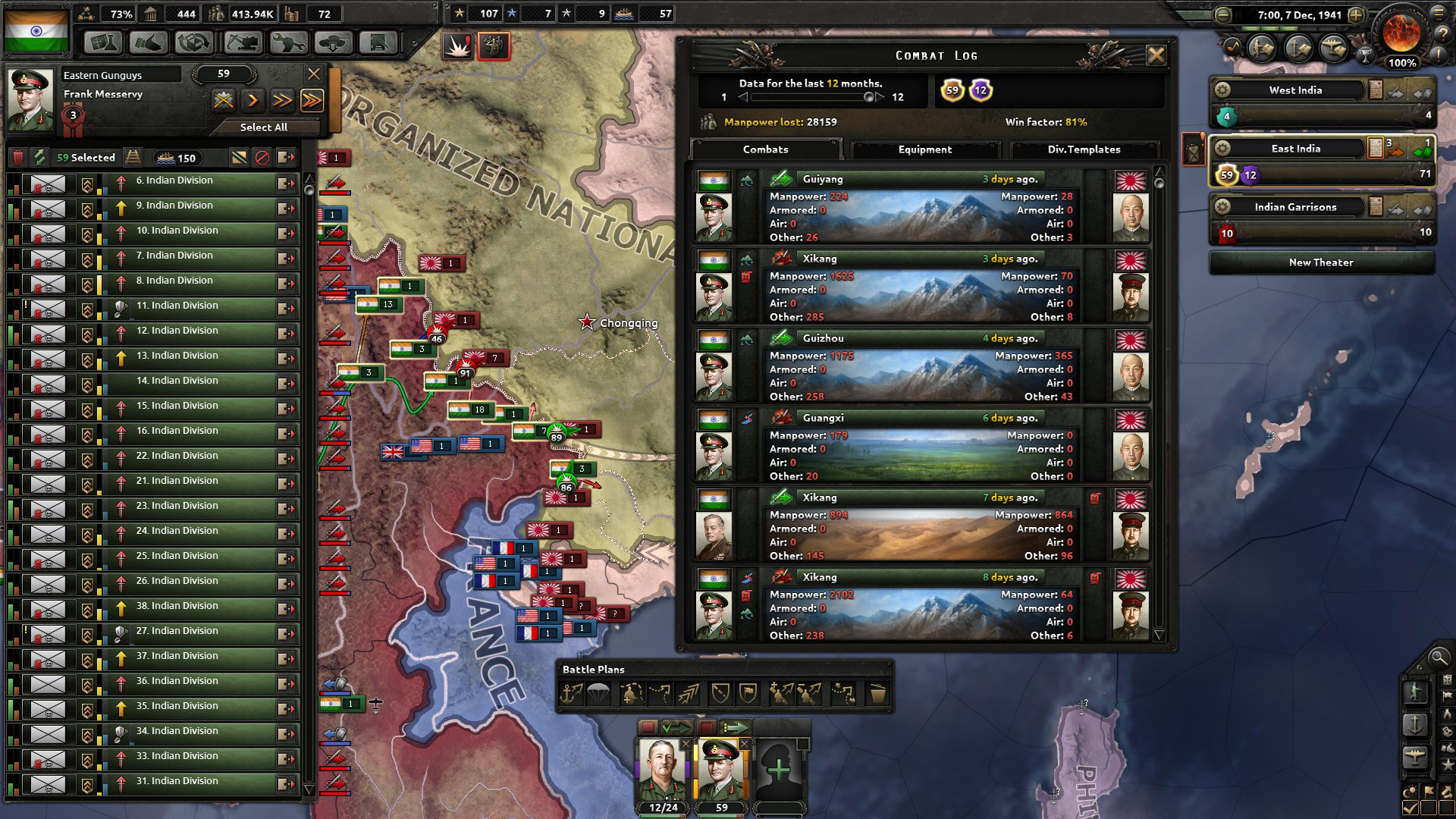 This new feature gives you access to history over combats for the selected command groups in the theater. Summarizing losses to combat damage, attrition, any combat modifiers that were present and breakdown on losses to air. The idea is for you to be able to analyze the situation after the combat is over. This part will be available for everyone as part of the free 1.3 "Torch" Patch. For people who get Together For Victory there are also two more tabs available letting you dig into lists of equipment losses for you and enemies and check out performance of division templates involved in the fighting. 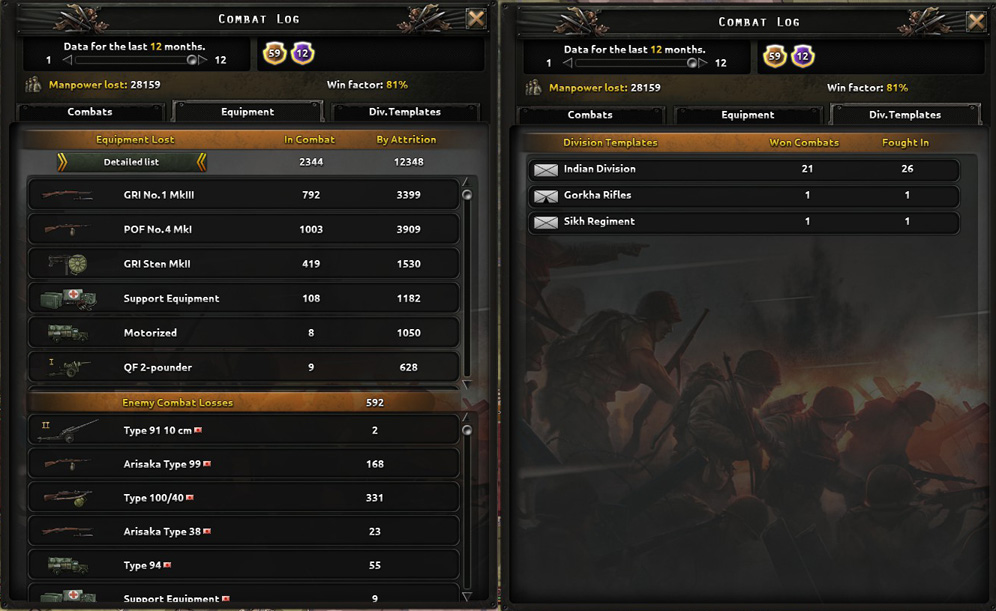 Thats it for today, next week I'll be inviting @Jazzhole and @Metal King over to talk about awesome new music and sound.
Also don't forget to tune in for today’s World War Wednesday Livestream and find out if who of the Allies and Axis will be able to tip the balance in the war in Europe! Watch it live @16:00CET over at https://www.twitch.tv/paradoxinteractive!
Last edited: Nov 23, 2016
Toggle signature
Reject reason to make the impossible possible!

Historically New Zealand even to this day never had enough manpower to field more than three divisions, barely enough to guard their home land. How on earth are they supposed to take on Australia?
Reactions:

Great to see Frank Messervy with a nice portrait, and the Mark V tank as the Commonwealth Great War model.

Question about new Combat Log Window - is it compatible with 0.8x UI rescale or I should prepare for same problems I reported in 1.1.0 patch ( and which wasn't still fixed ) https://forum.paradoxplaza.com/foru...scaling-for-1366x768-graphical-issues.959439/ ?
Toggle signature
My articles:

Hearts of Iron 4
Czechoslovakia - maybe not so weak - short history of pre-war Czechoslovakia
September 1938 - world on crossroad - Czechoslovak mobilization in 1938, which could change history​
Reactions:

@podcat any hint of a release date yet? I want my imperial hordes!
Toggle signature
Lead Scripter/Class Designer/member of ruling troika of the Faerun Soviet
https://forum.paradoxplaza.com/forum/index.php?threads/mod-d-d-forgotten-realms.1042010/

Savage's portrait really does make him look like everyone's uncle.
Toggle signature
To lords and ladies of Byzantium
Of what is past, or passing, or to come.
Reactions:

I foretell people being not to happy about the second two combat feedback screens being tied to the expansion rather than the patch. I recognise that these things take dev time and you most assuredly deserve to get paid for your effort but it does leave a slightly bad feeling IMO. Knowing how a certain division template is performing etc seems like a basic important part of division design (which is one of the major parts of the game).

imvdm said:
Historically New Zealand even to this day never had enough manpower to field more than three divisions, barely enough to guard their home land. How on earth are they supposed to take on Australia?
Click to expand...

Superior player tactics as always?
Toggle signature
If anyone proclaims a certainty of 100 % or more then you know that they are deluded about one thing at least.

@podcat, is there any chance to have a dev dairy on the new art and 3d models added in TFV? There looks to be a lot of it, and I love that kind of stuff!
Toggle signature
Lead modder for Equestria at War for Hearts of Iron IV. Founder of: The Four Nations - An Avatar: The Last Airbender Mod (CK2).
Reactions:

Something that I would like to see is technologies in the beginning of the game start researched by a company. for example in the 1939 start, Britain starts with the spitfire researched while the Germans must research the fw190. the Germans can research it using the messerschmidt company which gives them bonuses that Britain cannot get. will this be added to the game with the next expansion?

Additionally this would make the countries a bit more diverse as their equipment would be slightly different instead of being basically copies of one another.
Reactions:

Will we be able to mouseover on enemy equipment in the losses tab and see their stats, to find out about enemy armour variants for example?

A similar view to see what plane models an opponent is using would be most welcome btw.
Reactions:

imvdm said:
Historically New Zealand even to this day never had enough manpower to field more than three divisions, barely enough to guard their home land. How on earth are they supposed to take on Australia?
Click to expand...

Silly question, but... what does LP stand for after the tank names?
Toggle signature
Always outspoken, never outpunned.
Reactions:

Sleight of Hand said:
Silly question, but... what does LP stand for after the tank names?
Click to expand...

Something along the lines of "Licence Produced", I presume.
Reactions:
T

Sleight of Hand said:
Silly question, but... what does LP stand for after the tank names?
Click to expand...

I'd guess "licensed production" or something along these lines.