Menu
Install the app
You are using an out of date browser. It may not display this or other websites correctly.
You should upgrade or use an alternative browser.
Hearts of Iron IV 35996 After Action Reports (AAR)
Show only dev responses

While Waking the Tiger and Cornflakes were not supposed to focus on the naval part of the game, we actually ended up doing a few things anyways So today’s diary is going to be about that!

First up: We got a new screen in the Navy Overview Screen that gives you a breakdown of losses and kills. These can be filtered by nations and faction. 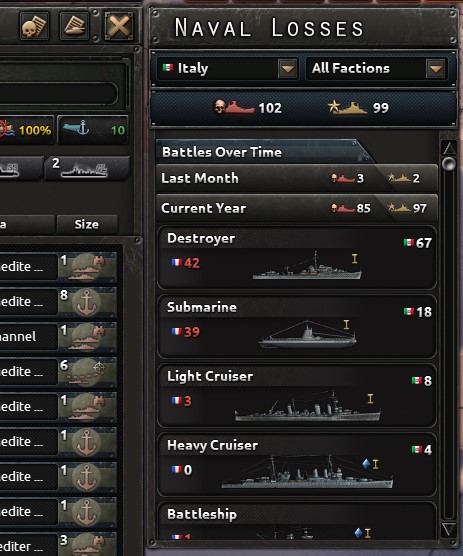 You can for example see that France has lost 42 destroyers and sunk 67 Italian destroyers during the last year. The interface also lists convoys, so it’s much easier to keep track on how much of the enemies shipping you have taken out and to see how its changed between current and last month. If you click on an entry here it will give you a detailed breakdown of the ships: 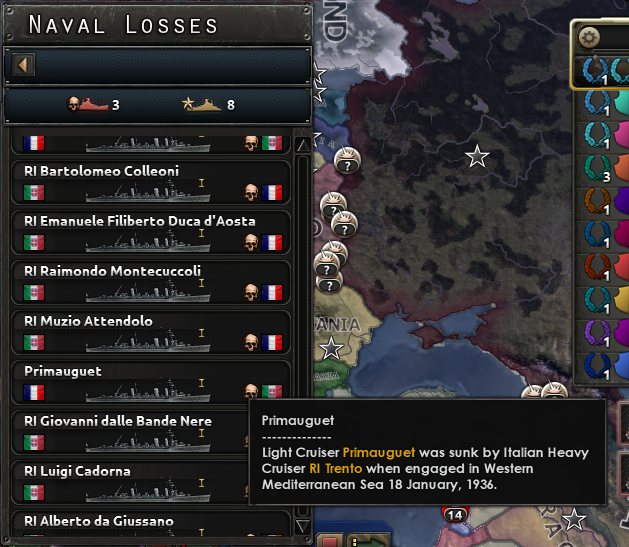 Speaking of convoys: we have changed how raiding works and how losses in convoy efficiency is handled. Convoy sinkings is now tracked by strategic area rather than route, meaning that if several routes go through an area that is being raided, they will all be affected rather than single routes randomly being hit. This makes things much more predictable and you can’t get around efficiency hits by suddenly stopping a trade or a change in supply situation. The actual effect of a sunken convoy depends on how many are active (so if there are two convoys shipping stuff and one gets sunk thats a big impact, but if it’s 50 then it is pretty minor). The efficiency itself reacts slowly a bit per day to avoid jumps and weirdness. This solution means that it’s possible to keep convoy efficiency for the enemy low as long as you raid enough. 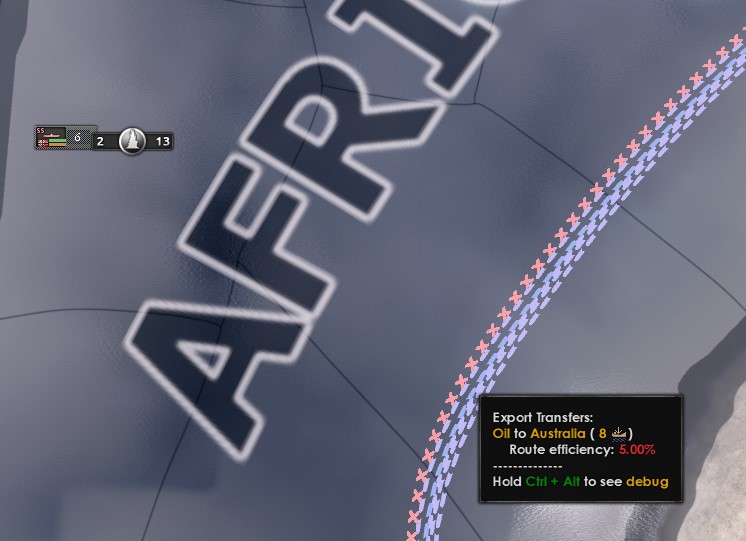 To help illustrate this to the owner of the convoys, we color routes that end up with lower efficiency due to raiding orange. Any area that is hit badly enough gets a special texture and is colored red. You can then focus your anti-raiding efforts on these areas.

We have also been tweaking the detection logic of submarines and how fleets engage. Fleets usually had a really easy time to find submarines due to some strange code thats now been keelhauled (a destroyer could more easily find a submarine that could find itself very easily...it was very philosophical), so we hope that part of naval warfare is going to feel better. Naval combat is an area that has been a bit neglected since launch, so we will be giving it some higher priority in future development.

Development wise the team is now in full polish and bugfixing mode, which means pet peeves like this one get addressed. I bet everyone who has played China or Japan has noticed this at least once: 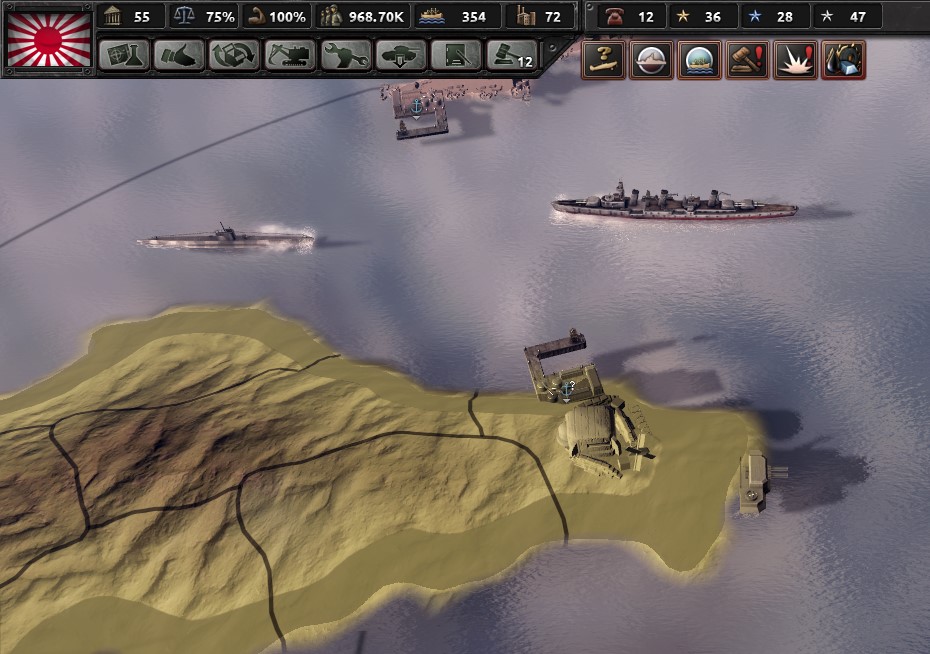 
We have also changed how transports interception is handled. Before it was possible to send a sacrificial transport first, and have it get caught by the enemy fleet as the rest of your transport fleet sailed past to invade the enemy. Now ships in combat are still able to detect transports for this case and “suck” them into the same combat. This should fix multiple exploits The way it looks on map (as the later transports may get caught in a different location) is that we show a special combat indicator over them and clicking on that sends you to the main combat in the zone. 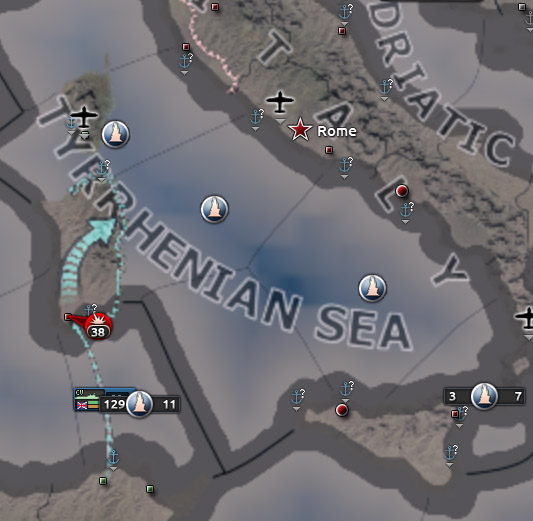 Next week we will be taking a look at achievements and nation forming, and some neat new UI changes.

Don’t forget to tune into World War Wednesday at 16:00 CET. Today we are going to start a new session (because Daniel was losing so badly vs Japan >:-D) as historical Germany, to show how it plays differently now.


Rejected Titles (due to popular demand):
What were we sinking!?
Loveboats II - The sinking of the Scharnhorst
Adding depth to the naval game
This DLC comes with free shipping
So the DLC is the Titanic and this bug is the iceberg...wait
Finding Nimitz: The Game
Last edited: Feb 7, 2018
Toggle signature
Reject reason to make the impossible possible!
B

Didn't expect this!
Toggle signature
Atrocity is recognized as such by victim and predator alike, by all who learn about it at whatever remove. Atrocity has no excuses, no mitigating argument. Atrocity never balances or rectifies the past. Atrocity merely arms the future for more atrocity. It is self-perpetuating upon itself — a barbarous form of incest. Whoever commits atrocity also commits those future atrocities thus bred.

I cant wait for more

This is unexpected but most welcome. Excellent news that submarines will no longer be waste of time.
Toggle signature
"The elemental truth must be stressed that the characteristic of any country before its industrial revolution and modernisation is poverty..." Mathias, First Industrial Nation, pg. 5
"The Central Committee and the government are in possession of definite proof that this massive exodus of the peasants has been organized by the enemies of the Soviet regime, by counterrevolutionaries, and by Polish agents as a propaganda coup against the process for collectivization in particular and the Soviet Government in general" - USSR leadership about famine & migration caused by bolshevik policy of confiscating all food despite human losses. Stéphane Courtois et al, The Black Book of Communism, pg. 164.
In Wiki we trust: VickyWiki|CKWiki (offline)|HoI2|EUIII|HoI3|Victoria II|CKII|EUIV|Stellaris|HoI4
Play Werewolf with fellow forumites.|"Skobelev is anything but competent" - tonkatoy5
How to register games on forum.

On the topic of convoy raiding, could we get an alert similar to the naval combat one when our convoys get raided? this is especially bad for nations like Japan that have an expansive island empire where divisions sometimes just get the idea to go on a swim without the player necessarily noticing, thus losing a good amount of divisions

Damnit podcat
now i wont be able to just move my whole panzer armee to england at the cost of a single infantry division!
jokes aside im happy i can actually not ignore submarines as germany now
Toggle signature
"...if life give you lemons you are forced to make mass lemonades." - Pyramid_Head, in reference to MA doctrine and house rules

If convoys are easier to intercept then the Allied AI needs to be smarter about not sailing everything through the med (and the Axis through the English channel) on an endless booze cruise.

That sounds like a very nice batch of changes. I'm very interested in how the fix to sub visibility plays out.

Nice!
Is this naval update included in base game or only DLC?

Looks good, but can you please fix the Air Production continuous focus (right now 20% is way overpowered), let us see allied planes in airzones (right now its blank) and allow allied fighters to escort allied CAS (so one player can control fighters and another CAS for example).

@Axe99
What do I think about this?
Toggle signature
I have an affection for a great city. I feel safe in the neighbourhood of man, and enjoy the sweet security of the streets.
(Henry Wadsworth Longfellow)
In Rome you long for the country; in the country – oh inconstant! – you praise the distant city to the stars.
(Horace)
Almost two thousand years apart, two revered poets comment, with reference to timeless qualities of city life.

podcat said:
Naval combat is an area that has been a bit neglected since launch, so we will be giving it some higher priority in future development.
Click to expand...