Menu
Install the app
You are using an out of date browser. It may not display this or other websites correctly.
You should upgrade or use an alternative browser.
Hearts of Iron IV 36623 After Action Reports (AAR)
Show only dev responses

Welcome to another glorious Wednesday! Today we are going to be talking about mines and mine sweeping. Historically hundreds of thousands of mines were laid during WW2 and with Man the Guns you too will be able to do so in Hearts of Iron.

From a gameplay perspective mines do a lot of interesting things. They add more interaction with the naval layer of the game, create a weapon both for smaller naval nations to fight bigger ones, and for big ones to try and limit where the enemy can get to them. 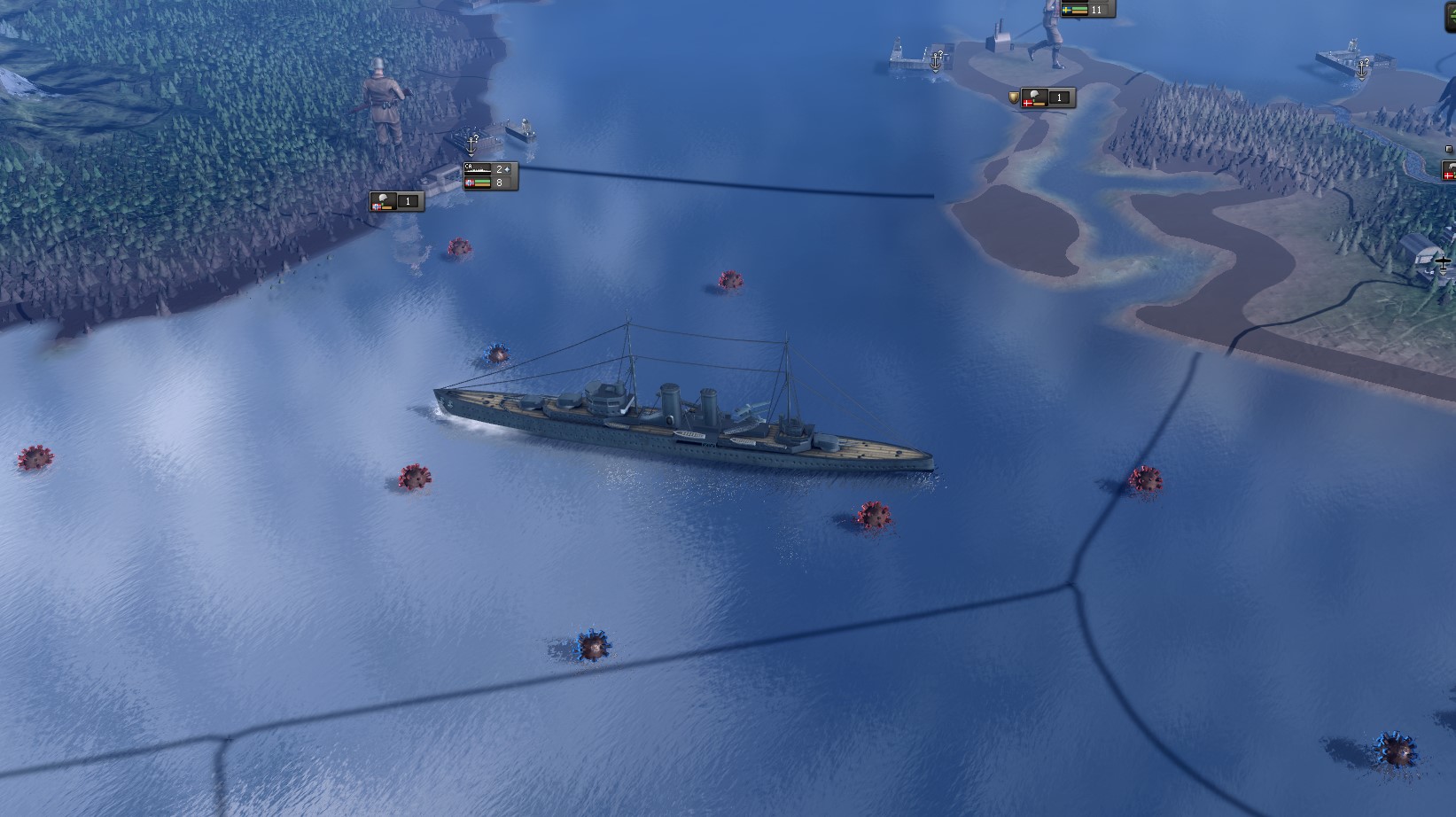 As you may remember from my presentation at PDXCON, I talked about adding a ship designer to Man the Guns. It is not quite ready to show off, but it’s important to know that sweeping and laying mines are something you will be upgrading or redesigning your ships to be doing. Minelayers and Minesweepers are not actually new ship classes. In my screenies I have destroyers that can both lay and sweep mines for simplicity, but as @Archangel85 pointed out earlier “I am probably going to have a ton of different destroyer designs”... anyways, details on the designer is for a future diary when it is done, but hopefully it helps explain some stuff in the proper context.

Mines are unlocked from techs and require ship designs fitted to deploy them. Destroyers and light cruisers can do this, as well as submarines with the correct tech (excellent if you as Germany want to make things even more dangerous for the British at a lower risk to yourself). Mines can also be dropped from the air with later game techs. Both of these unlock new missions for navies and airwings.

Mines can be made better and better through research. You start off with Contact Mines to unlock them. Then their destructive power is improved with Magnetic and Acoustic mine techs and finally with Pressure mines. At the bottom (heh) you also see two techs for submarine mine laying. The first is just the basic ability, while the second improves efficiency a lot by allowing mines to be deployed through torpedo tubes, thus no longer requiring you to design specialized minelaying submarines.

To get rid of mines you need minesweeper capable ships. This unlocks the naval mission to sweep mines and will slowly work at clearing areas. Minesweepers are also nice to include in your fleets as they will then be assumed to travel ahead of the fleet and reduce the impact of mines on them. I suspect a good design combo will be anti-air and sweeper on screen ships to be your passive defense when in enemy waters. 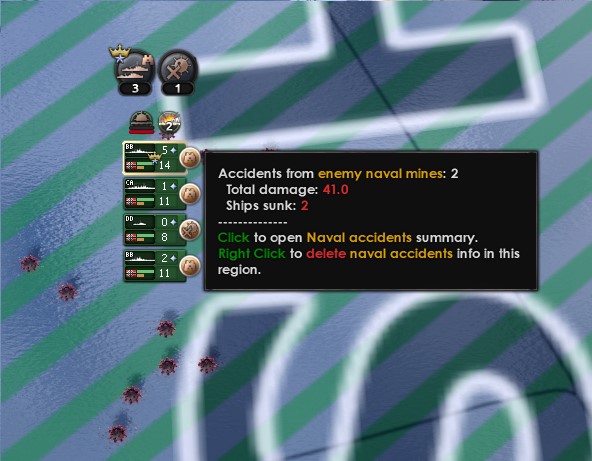 There is also a passive “degaussing” technology that can be researched after Magnetic Mines. This was employed during WW2 to reduce the magnetic signature of ships and thus make them less likely to set off mines.

It is also possible to sweep mines from the air, but this is a late game, expensive technology and unlocks a new air mission for bombers. This was something that was done sparingly and in shallow waters, but for example was successfully done to evacuate the Dutch royal family to Britain.

What do mines exactly do then? Well they blow stuff up! Their explosive results are shown on map as accident reports, and there is a new tab too under the Naval Losses statistics interface if you want to dig into details. As ships operate or move through a zone they will risk running into mines. This can lead both to minor damage as well as outright sinkings. The best ways to avoid this is to make sure the area is swept free of mines, but as mentioned above, having your ships travel with sweeping capable ships makes it safer for all.


This is not all through, mines have several passive effects.

Naval superiority - Having mines in an area helps amplify the effects of your navy (after all they can concentrate more effectively knowing where the mine fields are). This can be seen in our new naval area screen, which is the naval equivalent of the state view: 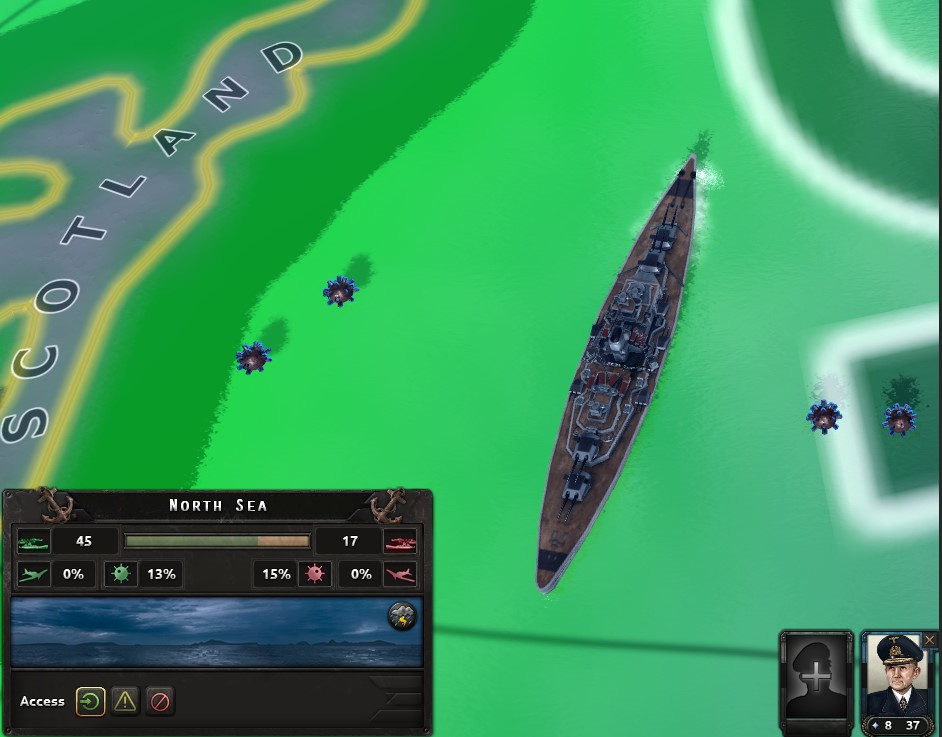 Other than that and blowing ships up mines will slow down enemy ships (since they need to be more careful) and increases the invasion penalty to coastal area. So mines are both good offensively and defensively. 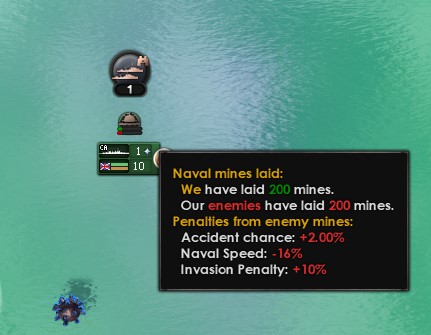 Mines can only be laid while at war and will start to disappear over time once a nation is completely at peace. You always know how much mines there are in an area, so you know how to deal with them and take them into account. That means that with the new naval access controls you can tell your ships and convoys to avoid heavily mined areas, but of course this may make it a lot more predictable for your enemies where to hunt. Having an advantage in the encryption-decryption war will also add a certain amount of passive defense against mine effects as you may have some information about their positioning.

See you all next week for more Man the Guns info!


Rejected Titles (for extra good reason this time...):
- This War of Mine
- Vengeance is Mine sayeth the Lord Admiral
- Do you mine’d
- This feature was made in cooperation with the seagulls from Finding Nemo
- Mine = blown
- The Ship Designer isn’t unfinished, it’s just a bit shy
- Minesweeper 2000 Online HD Edition
- Mine over Matter
- Mine the guns
Last edited: Aug 22, 2018
Toggle signature
Reject reason to make the impossible possible!

Add actual "Sea Mine equipment" to have to be produced with MilFacs later and the system is perfect.

Nice idea for Germany and the British.

I hope you don't forget to rebalance torpedos. They don't do much damage atm and screens are useless against battleship (only) fleets.
Last edited: Aug 22, 2018

I think you should be able to clear mines in a seazone by voluntarily playing (and winning) a game of minesweeper. It would really add to the immersion.
D

Most of the swedish ships, including the Tre Kronor class light cruiser did carry mines so it is nice that you have manage to represent that.

Anyway with all these new technologies, will you rebalance the research cost a bit so not a navy take up too much research and leaving little to non resources left to develop anything else?

Great dev diary, and I am glad that mines are being represented in a somewhat abstract manner, and that minesweepers are not a new ship class; (likewise, I think night fighters are better represented this way as well, rather than a separate new aircraft tech).

MtG is shaping up really well so far @podcat - good work on these diaries, and please add some more starting admirals for the major powers.
Toggle signature
"If we've been telling lies, you've been telling half-lies. A man who tells lies, like me, merely hides the truth, but a man who tells half-lies has forgotten where he put it." - Dryden, Lawrence of Arabia

Denkt said:
Anyway with all these new technologies, will you rebalance the research cost a bit so not a navy take up too much research and leaving little to non resources left to develop anything else?
Click to expand...

yea. there is gonna be some tweaks. we have also done other changes to research we will be showing in the future
Toggle signature
Reject reason to make the impossible possible!

podcat said:
Rejected Titles (for extra good reason this time...):
- This War of Mine
- Vengeance is Mine sayeth the Lord Admiral
- Do you mine’d
- This feature was made in cooperation with the seagulls from Finding Nemo
- Mine = blown
- The Ship Designer isn’t unfinished, it’s just a bit shy
- Minesweeper 2000 Online HD Edition
- Mine over Matter
- Mine the guns
Click to expand... So ships can also be sunk in training through accidents not caused by mines?
Toggle signature
In 1939-44 the Finnish military destroyed or put out of action 1.5M-2M men, 3k-3.5k aircraft and 3k-3.5k tanks of its enemy, Soviet Russia, at the cost of some 294k men, 240 aircraft and 50-70 tanks destroyed or put of out action in combat. This martial effectiveness combined with the overwhelming materiel and manpower advantage the Russians enjoyed at nearly all times, makes it a unique achievement in military history.

What happens between wars, in the case when Axis is destroyed and the SU declares against the Allies. Usually this happens pretty quick, and mines were an issue for countries for many years after the war. Having them just disappear seems wrong.

Will we be seeing land mines in the future? They were also an important part of the war.

Will there be changes to Canada’s Degauss Ship Hulls focus to make it more relevant to avoiding mines?
Toggle signature
Lead modder for Equestria at War for Hearts of Iron IV. Founder of: The Four Nations - An Avatar: The Last Airbender Mod (CK2).

Either everyone will mine the English Channel, or no one will. We'll see...

More tech? What about research slots?

In WWII, how many warships were sunk by mines?

When a sea area is swept by a mine sweeper well all the mines disappear or is a percentage based on the tech level you have.

Also a question. Well the number of mines laid and it’s destructive power depend on the size of the sea area? I guess I’m wondering how that well work.

Tirenedon said:
Will there be changes to Canada’s Degauss Ship Hulls focus to make it more relevant to avoiding mines?
Click to expand...