Jump to latest Follow Reply
Menu
Install the app
You are using an out of date browser. It may not display this or other websites correctly.
You should upgrade or use an alternative browser.
Hearts of Iron IV 42563 Bug Reports 13340 After Action Reports (AAR)
Show only dev responses

Hi everyone, after just getting back from enjoying our weekly Wednesday Indian food at a local place, what better topic to cover than India!

India is a colony under British rule, that means that, unlike the dominions we have presented so far, they have more restrictions and limitations placed on them. These are things that you will want to shake off as a player - for example, unless you gain Dominion status you will not fully benefit from technology sharing.

After Provincial elections are done India is faced with two paths towards freedom (Historically both occurred simultaneously to a degree, but player must decide which one they want to play). On one hand they can continue to cooperate with the British and earn their freedom or status as dominion through service and the autonomy system (see last week’s diary). India at this time is a nation split between the Quit India movement & Gandhi calling for freedom, various Princely states supporting the British as they fear losing their power, and a large Muslim community that can sway to support independence and the creation of Pakistan. If you check the rightmost part of the tree there are also British investors getting fat off of India which may gain you some short term benefits in military and civilian investments, but which will also set back your struggle for independence.

On the other side the player can decide to go the non-cooperative path “Swaraj”, or self governing. This in effect puts you in the shoes of Subhas Chandra Bose trying to rally support for Indian independence from other factions. You can both ask Comintern and Axis here for backing. It is also possible to proceed without backing, but it is very difficult. With backing (or not) you can then launch a civil war and fight for your independence and continue to build up your nation free from the clutches of the British imperialists. Note that there is no classic "fascist or communist" path here, the support you get will dictate the direction for your nation. Bose was in my opinion much more interested in practical things and achieving freedom rather than promoting ideology and would have gone with any side that supported him (he asked Soviets first historically, but was told 'no'). It doesn't mean that you can't peacefully go communist etc, but it would be done using regular mechanics.

Military wise India is famous for having the largest volunteer army in history at the end of WWII. To model this you are limited to a strict volunteer army until you gain higher autonomy levels. But several focuses give you forces from Gurkhas, Sikhs etc. India gets several choices for making its army more distinctly Indian: setting up local officer training of Indians, mountain artillery and jungle training etc. 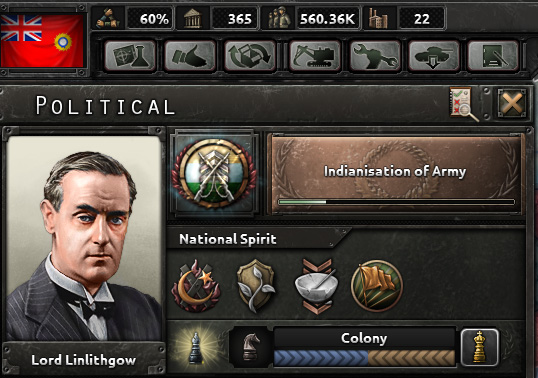 India also starts with the national spirit “risk of famine”. This is a serious internal issue that will be up to the player to solve. Famines have long been issues in the area, but war, corruption and the like will stress things to a breaking point. If you gain enough autonomy to gain control over local government, root out corruption and improve railways and infrastructure, you will be able to prevent the famine entirely, but it will put you into a bit of a race once you get dragged into World War II.

Subject Forces
As I hinted at last week the new autonomy system allows you to recruit forces from your subjects. This is done through the normal training & deployment interface where you can pick one of your subject’s division templates which gets copied over to you and is now marked as a subject template. These templates are a mix of yours and their manpower. For a colony its 30% of masters manpower and 70% of subjects. Actual equipment to arm them is supplied by the master. Other autonomy levels, like puppets, generally have lower requirements. These forces can only deploy in their home nation and must then be transported to other theaters. Using these forces also increases the subject's autonomy in the same way as expeditionary forces will, so its something the master needs to consider. 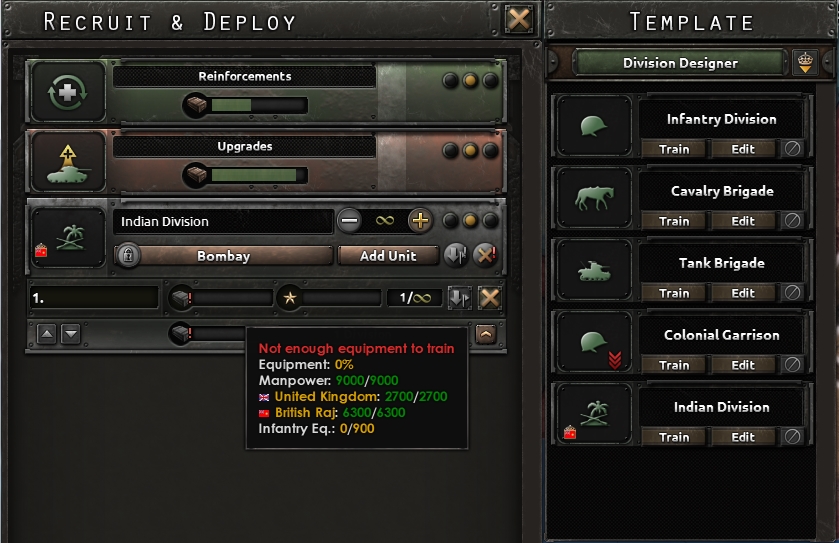 We are going on a short company trip to Malta tomorrow, so there might be some delays to posting that day. Just a heads up Next week we will be taking a look at New Zealand and some other stuff!

Remember to tune in for today’s World War Wednesday Livestream and find out if who of the Allies and Axis will be able to tip the balance in the war in Europe! Watch it live @16:00CET over at https://www.twitch.tv/paradoxinteractive!
Last edited: Nov 16, 2016
Toggle signature
Reject reason to make the impossible possible!

I demand to see a portrait of Orde Wingate at once!

Great diary. I like the look of the focus tree and the subject forces stuff. Great to see a Chindits focus, too -- what does it do in this case?
Toggle signature
Always outspoken, never outpunned.
Reactions:

Looking very good. I think properly modeling the allies will also give a buff to the axis indirectly, since e.g. SA can't field 60+ divions prior to the war now. I am so hyped!

Edit: Can you show the exact benefits / negative effects of the national spirits?

Looks great again! More variety to "minor" countries. (if you can say that for a country with the 2nd largest population)

So does the AI have some pacific tendencies? I.e. it doesn't play as optimally as would be possible, doesn't make it's country super strong and behaves less aggressive than a human player would.
Toggle signature
Paradox fan since EU1
Reactions:

I like the idea of having to stave off a famine, but I wish the DD went into some detail of what the actual effects are if you fail. Do you lose manpower and perhaps factories?
Toggle signature
Cities: Skylines is the only game I know where people get mad at the developers because mods aren't working --Lucododosor
- - -
"Paradox gamers are funny. They take games that need dozens of hours to learn, that they play for hundreds of hours, and they say "Oversimplified and dumbed down. No replayability value." --Panzer Commander
"We'll have people put 400+ hours into a game and then come over to the forums to decry it as "unplayable" without a hint of irony." --icedt729​

Adrized said:
Is it just me or does the indian focus tree look smaller than the other ones?
Click to expand...

The others are too big.
Toggle signature
Always outspoken, never outpunned.
Reactions:

Will the two nations thing result in a possible Pakistan tag?
Toggle signature
Location: White Plains, New York
Ethnicity: 50% Dravidian(Malayalam) 25% Afro Caribbean(Jamaica) 12.5% European pos. Welsh or Dutch 12.5% Han
Culture: 100% Yankee
DOB: October, 6 1998
There are 3 things that are non-negotiable in this world: Democracy, Trains, and Victoria 3 - myself
The future is ours to decide. - Shulk, Xenoblade Chronicles
What's important isn't whether you can see the future or not. It's the will to make a choice, and the strength to seize your destiny! Our time has come. OUR DESTINY IS OUR OWN! - Shulk, again
Reactions:

Take notes while in Malta as it was part of the Commonwealth. Maybe not to give it own nation but you could add a Malta NF chain to Britain's NF tree.
Toggle signature
My Mods: Third Reich Events for HOI IV ,Third Reich Events [Sub-Mod for BlackICE]

Take notes while in Malta as it was part of the Commonwealth. Maybe not to give it own nation but you could add a Malta NF chain to Britain's NF tree.
Click to expand...

There is already a Fortify Malta focus down the Mediterranean Bastion tree (Adds coastal forts and airbases I believe), what else could be feasibly added?
Reactions:

Is there a way for the Master to see the Colony/Puppet's remaining manpower so they can plan accordingly?

Also, since the divisions are raised in the Colony, but using the Master's equipment, does the master just need to have sufficient equipment on hand or does it need to be shipped like lend-lease equipment?
Reactions:

Yammka said:
I hope Gandhi is accurately portrayed as a nuke-happy fascist hellbent on world domination.
Click to expand...

That's what the "Smiling Buddha" focus is about for sure
Reactions:

Nice, cannot wait to play it.

Something that always bugged me is that technologies cannot start researched by a company. for example in the 1939 start, Britain starts with the spitfire researched while the Germans must research the fw190. the Germans can research it using the messerschmidt company which gives them bonuses that Britain cannot get. will this be added to the game with the next expansion?

Additionally this would make the countries a bit more diverse as their equipment would be slightly different instead of being basically copies of one another.

Have a nice trip to Malta, perhaps it will inspire you to take a look at some 3d models for the commonwealth navy ;-)
Reactions:

- will there be new naval sprites in TfV?
- do you plan on ever making any unique 2D ship artwork? (ENG and the Commonwealth nations could share theirs)
Toggle signature
Always outspoken, never outpunned.
Reactions:

podcat said:
We are going on a short company trip to Malta tomorrow, so there might be some delays to posting that day. Just a heads up Next week we will be taking a look at New Zealand and some other stuff!
Click to expand...

That has to mean something. Now I am waiting for an announcement of an upcoming Malta-DLC for HOI4
Toggle signature
"I stepped out. I did not step down." - Volrath, The Fallen
Reactions:

If India becomes a dominion, will there be an event to give them an india leader instead of Linlithgow?
Toggle signature
​
Reactions: