Welcome to the third dev diary on Death or Dishonor and 1.4 Oak update! I hope you are hungry for more info because today we will be talking about... Hungary (ugh that joke didnt really work now did it?)

A landlocked Kingdom run by an Admiral, Hungary had without a doubt one of the more unusual political systems of the interwar period. At the end of the Great War, Hungary had broken away from the disintegrating Habsburg Empire, and after a brief period as a communist republic, was occupied by the Entente.

Subsequently, the Treaty of Trianon was signed, which reduced Hungary to a rump state. In the Treaty, Hungary lost two thirds of its territory and a third of its population. Harsh restrictions were placed on the Hungarian military. Hungary was banned from having a Navy (a crushing injustice, to be sure) or an air force. The Army was limited to 35,000 troops, what military factories existed were under strict observation. In many ways, it was the Treaty of Versailles of Hungary.

In game this state is represented by Hungary being a Disarmed Nation, with no available manpower, and a crippling 50% construction speed penalty for military factories. Getting out from under the treaty is your first objective. There are several ways to do this: At the far right of the tree, you have the Bled Agreement, which historically was signed in 1938 and which allows you to rearm freely. But the surrounding nations must approve it. Should they refuse, you can still abolish the treaty through other means.

After you have gotten the right to bear arms back, the tree opens up and you can choose how to rebuild your military. On the Army side, you can choose between the infantry heavy Home Defense branch and the offensive-focused Mobile Focus. In the Air Force branch, you can select how to procure new planes - you can develop them yourself or get them through license deals with other countries (the licenses in these focuses are free).

Politically, one of the obvious goals is to regain your territory. Fans of intricate event chains will be happy to know that you can gain all of these territories through peaceful annexation - if the other side agrees. The AI will call your bluff if it believes you are weaker than it, and things can quickly spiral out of control (the Demand Transylvania event chain is possibly the most extensive event chain we have ever done in HoI history, with 25 events and 16 different outcomes), which can even bring in other European countries.

If you want to take the country down a somewhat less historical path, you can decide to murder Horthy and restore the Hungarian People’s Republic, either to join the Comintern or to make your own faction.

On the other end of the political scale, we worked with the idea that Hungary was, in principle, still a monarchy. Two attempts by the deposed Carl IV in the early 1920ies failed to put the Habsburgs back on the throne, with the Hungarian parliament passing a law banning him from ever returning. The rejection broke poor Carl’s heart, and he died soon after (some say it was the pneumonia he contracted while flying to Hungary in an open plane to regain his throne, but we know better). This left his son Otto von Habsburg in charge of the house. 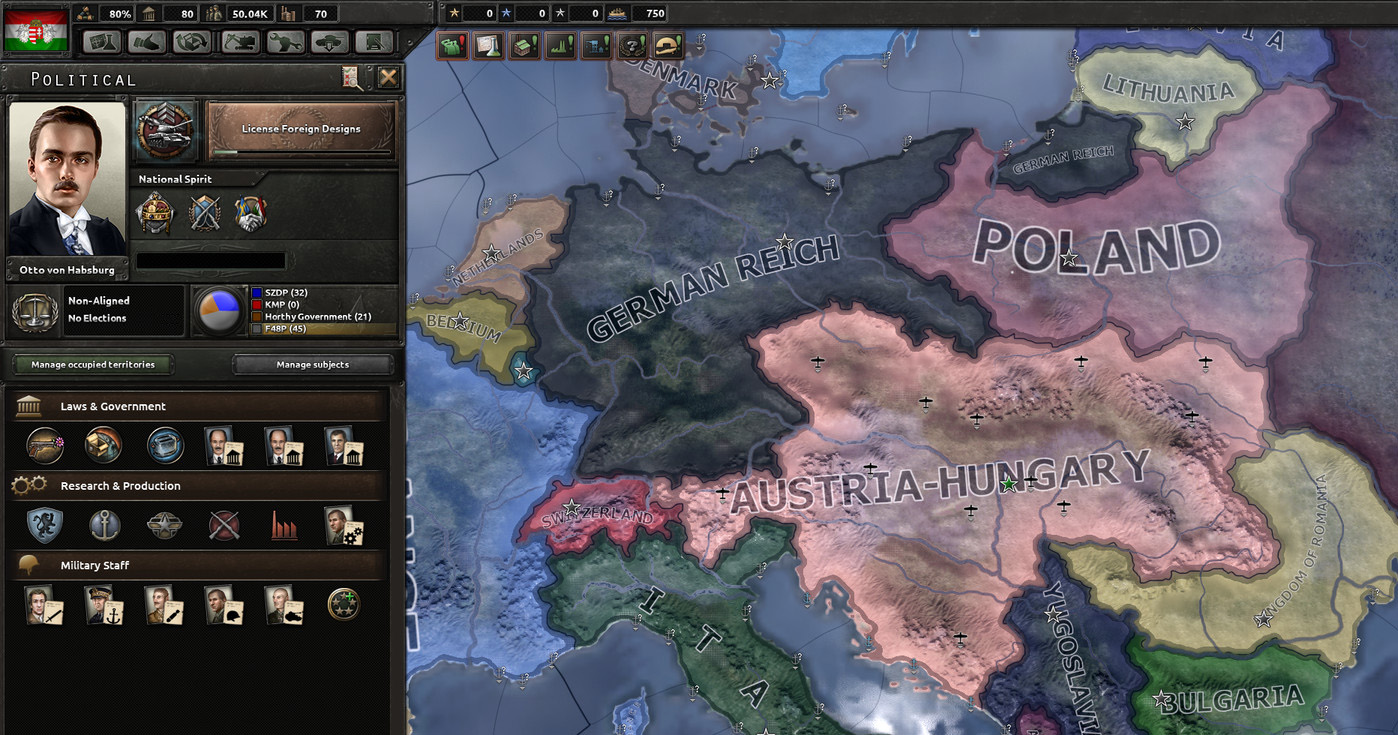 The monarchist faction in Hungary was split over whether the Habsburgs should be forever banned from the Throne of Hungary, or if it was only Carl who was no longer welcome. In the game, you can side with either faction. You can either offer the crown to a proper Constitutional Monarch and become a democracy, or to a King who has...connections to certain rather radical groups in other countries.

Finally, you can invite Otto von Habsburg to take the throne that was once his to inherit. If you do, you have committed to seeing the Habsburgs restored to their old glory. It will be a struggle, as the other powers of Europe will most certainly not tolerate this, and you may well find yourself at war with all three sides main factions. 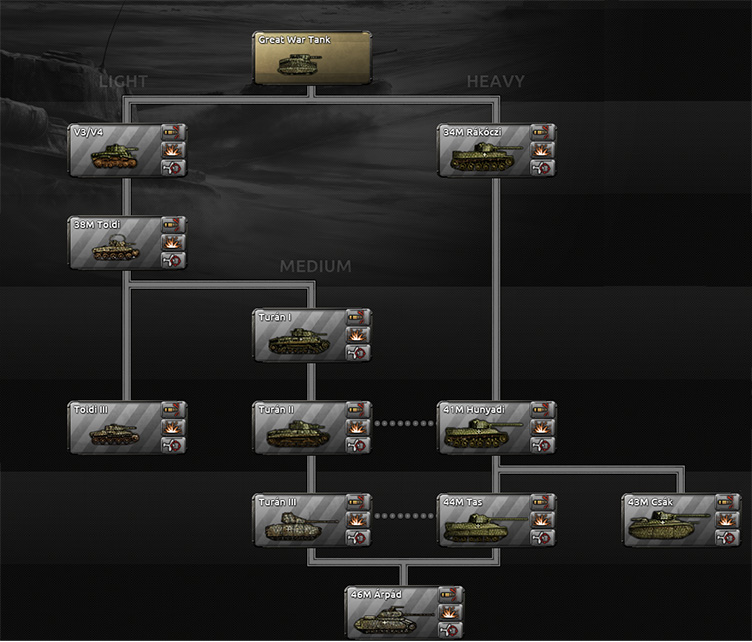 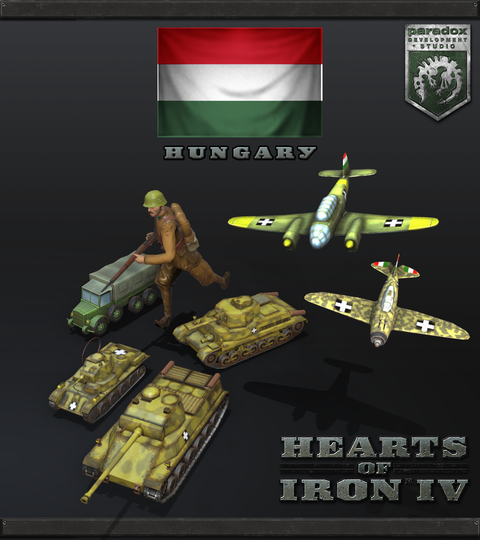 Also new generals and leaders, here are a few of them (guess who gets to be a real admiral)

For next week's diary we will be checking out the new Equipment Conversion feature. Also do tune in to the World War Wednesday stream at https://www.twitch.tv/paradoxinteractive with me and Daniel at 16:00CET. We will be going full "hot code!" mode and continue part two of our new Romania campaign.

Also, we added Aluminum in Asia (you know who you are ;P)
Last edited: May 3, 2017
Toggle signature
Reject reason to make the impossible possible!

Nice!
Toggle signature
"I cannot feel that a man-of-war is a proper place for a Chaplain...it seems to me uncommon odd, and precious near to cant, to tell the ship's company of a man-of-war with loaded guns to love your enemy and turn the other cheek when the ship and every man jack aboard her is there to blow the enemy out of the water if he possibly can. Either the hands believe it, and then where is your discipline? Or they don't and then it seems to me to come hellfire close to mockery of holy things" Jack Aubrey

Will Austria-Hungary get an event to move the capital to Vienna at some point?
Toggle signature
If anyone proclaims a certainty of 100 % or more then you know that they are deluded about one thing at least.

The establishment of the Kievan Rus:
https://forum.paradoxplaza.com/forum/index.php?threads/rise-of-the-rurikid-a-kievan-rus-aar.1129045/

I find the 'Protect Czechoslovakia' focus cute. I don't know what it does, but I would love to know how the Hungarian army that was like 10x smaller would protect the poor Czech fellows. I'm also curious whenever the restoration focus triggers attack from Little Entente powers.

16 different outcomes, robbie approves!
Toggle signature
Why do people continue to underestimate the stupidity we are capable of?
Status: Studying Video game development

podcat said:
Welcome to the third dev diary on Death or Dishonor and 1.4 Oak update! I hope you are hungry for more info because today we will be talking about... Hungary (ugh that joke didnt really work now did it?)
Click to expand...

Will Austria have focus tree as well? It would be a shame to see a nation that has so far been Anschluss material not have the ambition to restore it's glory and even more when Hungary can do so.
Toggle signature
O Theos einai Mega!

Can you take the naval focuses before you have coastal provinces?

Looks very good, apparently my fears regarding the tank tree were unfounded. Looks like I'm gonna buy this one.
Toggle signature
My mods:
Death or Dishonor: Generals -- Version XII, May 6th 2020

It is a very intriguing idea to offer a Hungary-player several alternatives when electing a king. I hope that Horthy himself is one of the candidates since he was the regent and the strong man of the nation, myself I would prefer having him crowned as king if a monarchy is opted for. Overall, a very interesting implementation of the Hungarian focus-tree, I think you have splendidly succeeded in making Hungary a more interesting nation to play with this inclusion.
Toggle signature
In war, the ultimate victims are the innocent.
-The Empathetic

Otto von Habsburg was pretty democratic man, however. Will it not be possible to become democratic with him?

Adrianople said:
Will Austria have focus tree as well? It would be a shame to see a nation that has so far been Anschluss material not have the ambition to restore it's glory and even more when Hungary can do so.
Click to expand...

Romania, Hungary, Czechoslovakia and Yugoslavia, that's all for this dlc.

By the way, I really like all the political pathes

I am curious how these 4 countries with new focus trees will interact with each other. Seems like a lot of new possibilities but many are in opposition to each other, so depending on other countries' agenda the outcome might be different each time you play.

I am interested to see how the event chain works.

Too much aluminum in Asia!

25 events and 16 outcomes for Transilvanya, all that work for a 2 slot province?
Very nice tree and good work
And to keep the trend like the "more aluminium in Asia guy", MORE BUILDING SLOTS IN ROMANIA!!!! Thx

Also that color does not fit Austria-Hungary, Austrian color is much more fitting. I hope I can set Vienna as the capital
Ty for incorporating this, I love it

1. DD is great I might actually play Hungary after it is released.
2. Thanks for adding aluminum to Asia!!!!!
Toggle signature
Rarely is it the level of technology or battle concepts that win or lose the war. It is more often the will of men.

"You will not argue with, comment on or question the actions/authority/ or comments of the Paradox staff (Administrators, Moderators, etc.) in a public forum. Should you wish to do so you are directed to contact the Paradox staff via PM" - Community Code of Conduct

podcat said:
Also, we added Aluminum in Asia (you know who you are ;P)
Click to expand...

Could you pls also add some jungle to Indochina?

Thrac said:
25 events and 16 outcomes for Transilvanya, all that work for a 2 slot province?
Click to expand...

Look at the map - I wouldn't be surprised if there are three different options on how much land to demand.
1. The historical two province option.
2. A bigger option with the whole of Transylvania.
3. Full 1914 A-H borders including the Romanian parts of Banat too.
Show hidden low quality content
You must log in or register to reply here.
Share:
Facebook Twitter Reddit Tumblr WhatsApp Share Link
Top Bottom