Hi everyone! Most of the team is now back after summer so it’s time to spin up the ‘ol diary machine again. Today we are going to be talking about something we have been thinking about adding for a really long time: Custom Gameplay Rules.

First off, let me explain why we are doing this - HOI4 is a game people play in a lot of different ways. Single player, multiplayer, achievement runs, casual relaxing and various other. There is also a big split between people who play “historically” vs people who don’t (it’s around 50/50). A lot of stuff that adds fun and a sense of power in singleplayer are not very balanced for organized competitive multiplayer so organizing these games can be challenging, often including long rulesets and policing by the server host. I personally think a big reason competitive multiplayer isn’t as common (about 6% of MP games are competitive) is because it’s so much harder to set them up when they require reading rulesets, which become fragile when the game itself isn’t enforcing them.
When it comes to single player, players often ask for ways to tailor how they play. For example; some will use console commands to switch nations to set them on certain paths to match their long term plans for the scenario they want to play out etc, but it’s not exactly beginner-friendly, and isn’t possible to do in multiplayer either. So looking at all of these things we decided that we needed to support different rulesets and let players affect how the ai did things in more detail.

So, enter Custom Game Rules. This is a new setting you can do before you start your game, and includes the old buff sliders for majors as well: 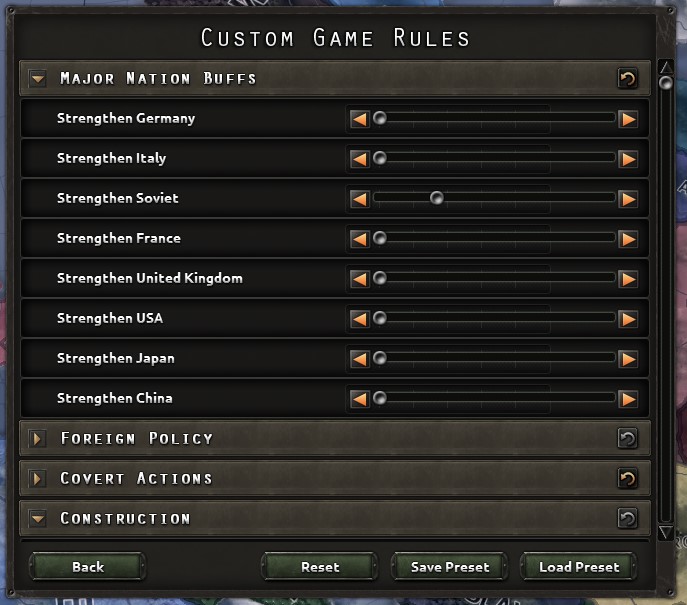 It’s possible to store and load presets if you have a couple of prefered profiles you run (say single player and multiplayer?). We have tried to make rules as moddable as possible although when they directly impact hard-coded gameplay mechanics we need to make sure we have worked them in first. We’ll go over the modding aspects towards the end!

So what kind of stuff can you do? We haven’t fully finalized it all, but let’s go through what we got. I am sure people will have tons of suggestions in the comments too

All diplomatic actions have the possibility for rules. So we can restrict or ease up how things work. This is particularly good when you want to tie focus trees into it. The new British tree has a lot of interaction with releasable nations, so this also lets us manage that from scripts and avoid exploits and weird situations (such as the player going down the ‘empire’ path, and yet releasing every colony they own). 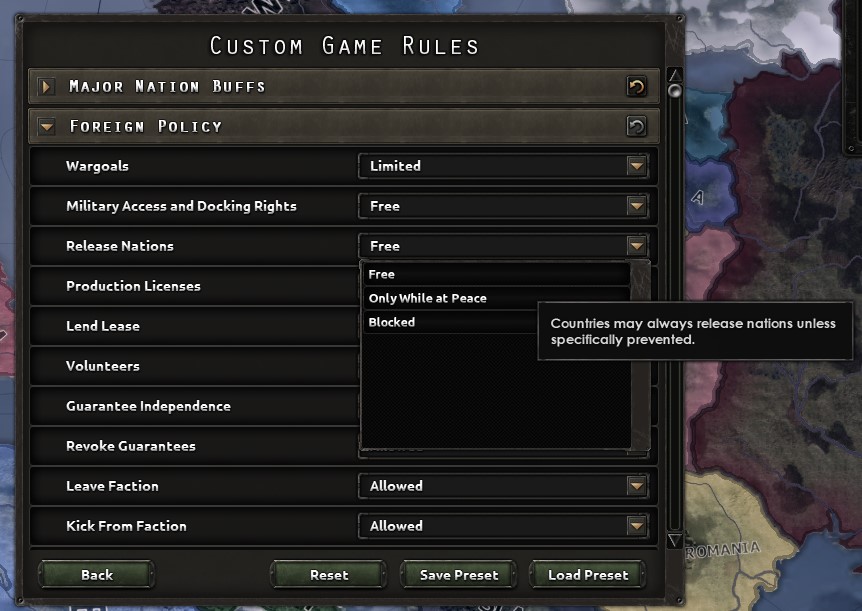 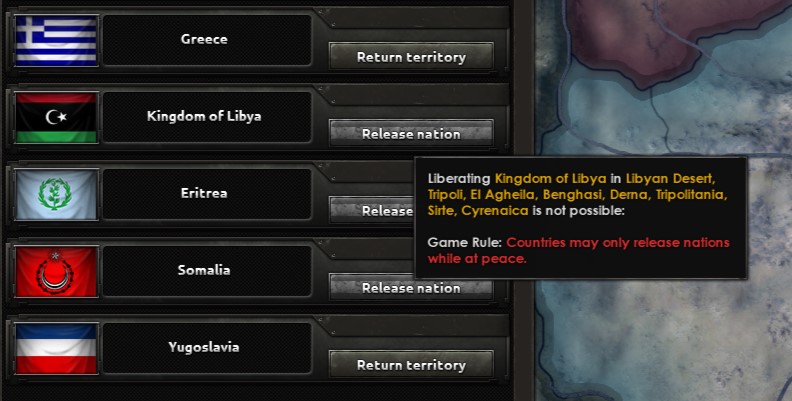 Covert actions are also included here, so you can for example restrict coups and such only to AI nations (a common rule in our own MP sessions).

There are also other bits and pieces like being able to limit fort levels constructable, limiting paratroopers and such we are playing around with. Other things rules we see people use a lot are for example limiting war declares before certain dates etc. I expect we will be presenting a full listing of options later when we stream stuff closer to release.

You can also affect how you want the AI to act. Mostly this means it will be preferring certain choices and switching to alternate plans. If you want to tailor-make your game experience this is a great way of ensuring certain (a)historical outcomes being attempted by the AI no matter your settings. 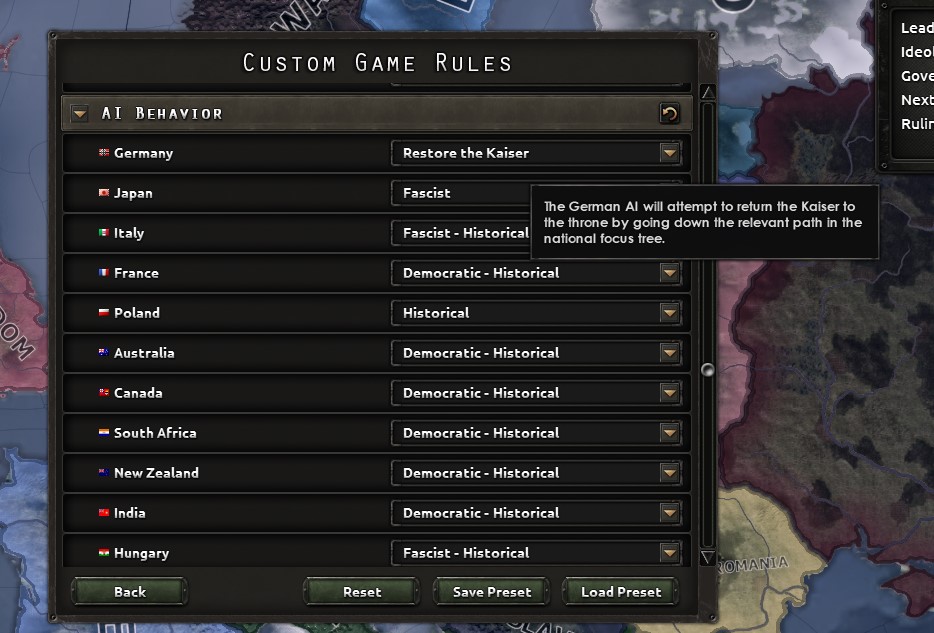 For most there are options for ideology while some like Manchukuo are more relevant to its situation:

Some settings, like this particular one, are dependent on DLC, so without Waking the Tiger (which comes with that focus tree) the option simply won't be there. Otherwise the whole custom rules system is part of the free update and is for sure something we will be building on in the future.

Rules will generally turn off achievements, but its possible to set it by rule so if we introduce something we feel is ok in both it will still work.

Modding
So, when we started with this we realized we couldn't support every tiny rule some MP groups were using and instead we’ve tried to make it as easy as possible to mod things in. It’s my hope that some cool ruleset mods will be developed specifically for competitive multiplayer and the like in the modding workshop. Very popular options may even see inclusion in the base game in the future, who knows I expect some of the big mods will want to include custom rules as well for their players. 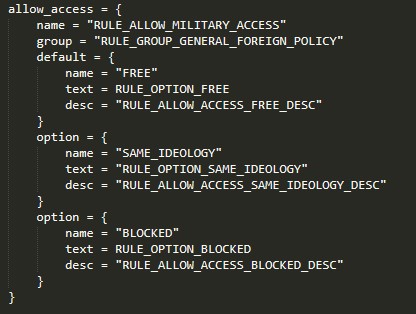 They can then be checked from triggers from say the tech tree, focus tree, events etc and in other places we have added support for triggers. Example:

Diplo actions are a little special. They each get two possible triggers. This way you can turn on or off the standard game checks (like checks against world tension from game code) with the _TRIGGER_OVERRIDES_GAME. For your own rule checks you use the _ENABLE_TRIGGER for the specific action and the scope will contain the target nation as well so you can do nation specific rules.
This is what the triggers for Guarantees look like: 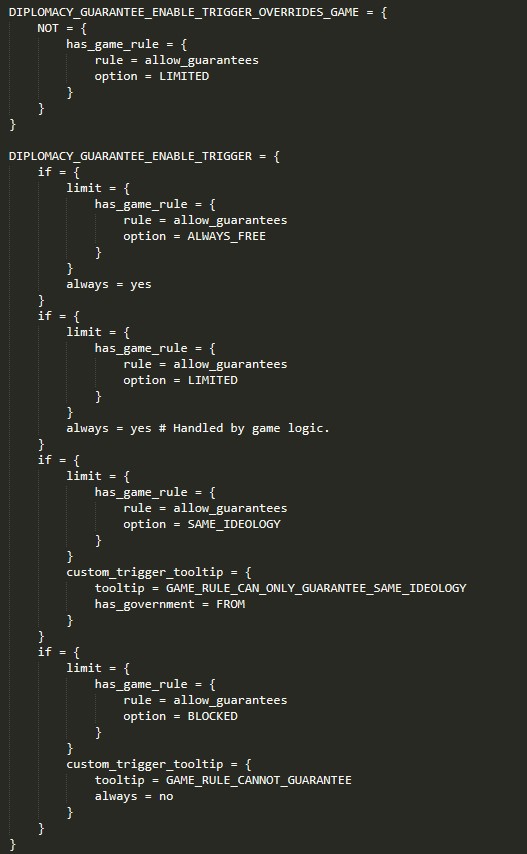 That’s it! Tune in next week to find out more about what we are up to with Man the Guns and the 1.6 ‘Ironclad’ update.
Expand signature
Reject reason to make the impossible possible!

Oh yes! I've been dreaming of that practically since release
Expand signature
A conqueror is always a lover of peace, he would prefer to take over the country unopposed.
-Clausewitz

Question regarding a specific rule that we were discussing in the teaser thread: does setting the nations to specific paths turn off achievements? I know you probably don't want to discuss every case, but this was causing a bit off a stir.
Expand signature
Genius only pawn in game of life.

Currently achievements are also possible with historical off. Is there some sort of "all random" setting for tree branches were achievements still work?
Expand signature
A conqueror is always a lover of peace, he would prefer to take over the country unopposed.
-Clausewitz

setsunaluvr said:
Question regarding a specific rule that we were discussing in the teaser thread: does setting the nations to specific paths turn off achievements? I know you probably don't want to discuss every case, but this was causing a bit off a stir.
Click to expand...

yes, for now at least. In the future there might be paths we feel are fair and non-exploitable, but in general that wont be the case. The game becomes a lot easier as say the soviets if you make everyone go communist right? Same reason the buff sliders disable achievements.
Expand signature
Reject reason to make the impossible possible!

hmmm ... so we guide the AI to the rails we want ? but wouldn be more beautiful to 'teach the AI' to react on its own according to players choices instead of pre set what will happen ? i dont even know if that possible in terms of coding ... nevertheless i can wait to test the new Rules ...

Ooooh this is gold. can't wait to mod this though
Expand signature
Ships sail on water,m'lord.

princeseth said:
hmmm ... so we guide the AI to the rails we want ? but wouldn be more beautiful to 'teach the AI' to react on its own according to players choices instead of pre set what will happen ? i dont even know if that possible in terms of coding ... nevertheless i can wait to test the new Rules ...
Click to expand...

well it does do some of that already, but say what kind of player action would make germany bring the kaiser back if they play Peru for example?
Expand signature
Reject reason to make the impossible possible!

Will it still be possible to ignore the AI behaviour rules if we want a more random, organic playthrough?

podcat said:
well it does do some of that already, but say what kind of player action would make germany bring the kaiser back if they play Peru for example?
Click to expand...

Peruvian President: "Release the alpacas!"
German people: "Oh no, only the Kaiser can save us!"
Expand signature
Darkest Hour, a 1914-1963 grand strategy game:
http://forum.paradoxplaza.com/forum/forumdisplay.php?f=554
http://www.darkest-hour-game.com/
​

Finally we can enforce our rulesets for MP properly!

Not the feature I'm most excited about in the upcoming patch, but certainly very useful.

ShadowPip said:
Will it still be possible to ignore the AI behaviour rules if we want a more random, organic playthrough?
Click to expand...

Well... No taking an advantage over AI then. But still good feature and I can´t wait to try it.

Influencing the AI's behaviour to go down a different path instead of just picking non-historical and hoping for the best?
Yes, that is a great addition. Thank you!

This is perfect. It is absolutely perfect. This is what every MP mod maker ever has been dreaming of. Thank you!

I kind of like the change
But on the other hand.. was it really worth the effort?
There's technically no difference between enforcing certain rules by some community-made ruleset or... enforcing them with an in game rules ie. there's no difference between saying "don't do cover actions against humans" and simply setting an in game rule that prevents that. The only exception being when you encounter some 'memers' who enjoy breaking the rules, but then we have a great function of kicking players from the lobby.
I guess, to a certain extent this could be improved with a mod that increases massively the number of possible game options. But on the other hand we don't need game rules at all to block certain things(like ie. max fort levels)